British law states that any new drug used for medicine must be tested on at least two different types of live mammal. One of these must be a large non-rodent type animal.
Formed in 1960 BIBRA (British Industrial Biological Research Association) was the most prominent animal testing laboratory in the UK.

BIBRA would give advice and carry out research to assist the food and related industries in their task of ensuring that foods complied with the requirements of the Food and Drugs Act, it would provide data to aid the Government in establishing regulations concerning the composition of foods.
In performing these functions, it would act also as the ‘watch-dog’ for the general public.

BIBRA also received financial support from the Government and, in addition, has been fortunate to receive generous grants for specific research projects from various independent bodies, including the Nuffield Foundation, the British Nutrition Foundation and the Wellcome Trust to name but a few.

In 1997 the change in attitudes towards animal testing (vivisection) led to 150 activists marching on BIBRA toxicology laboratory to be greeted by a massive police presence, including around 20 riot vans, police horses and police dogs. Outnumbered, the crowd made several unsuccessful attempts to gain access, but were forced back by police. Eventually they carried out a noisy march through the surrounding streets.
This incident and the planting of incendiary bombs by activists under two of the scientists’ vehicles led to bad press and resentment towards BIBRA.

In 2003 the leading BIBRA scientists broke away to form a new company and two years later they asset stripped BIBRA for its best scientists and TRACE, the world famous toxicological database and databank.
What was left (A sullied name and an old contaminated lab) was 'sold' to Surrey Clinical Ltd. Unfortunately (sic) Surrey Clinical went into liquidation in 2005.

Wandering around this place is a weird experience. There's so much stuff left behind it's like everyone's just gone to lunch.

The other weird thing is it is adjoined to a primary school. 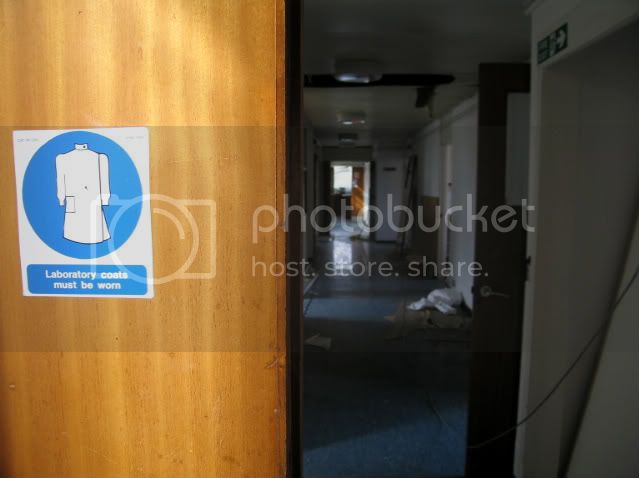 2. One of the many well stocked labs. 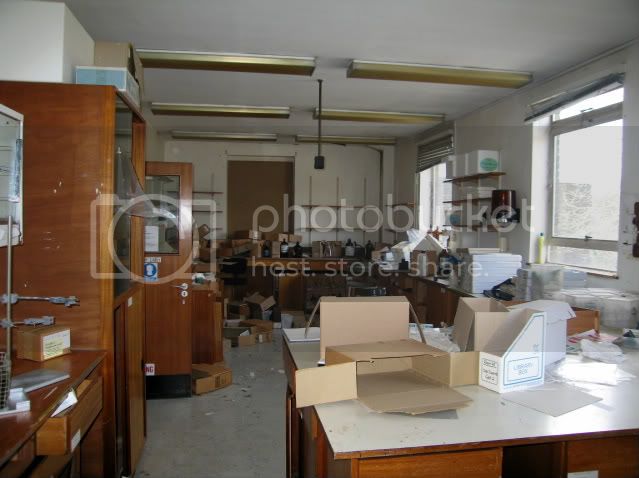 3. Tiny selection of the pyrex left behind. 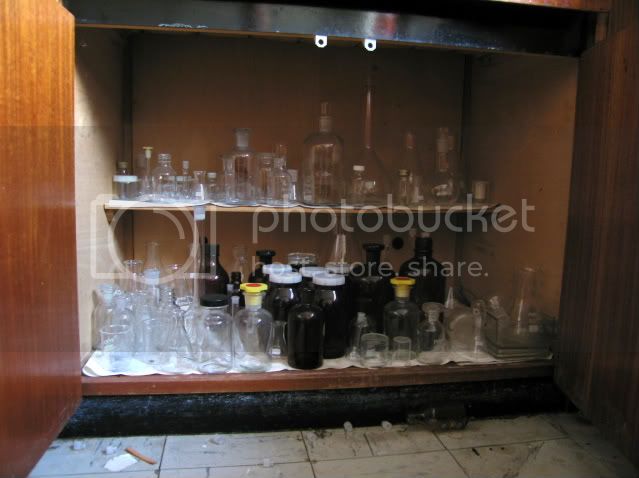 4. Segments of monkey brain anyone? 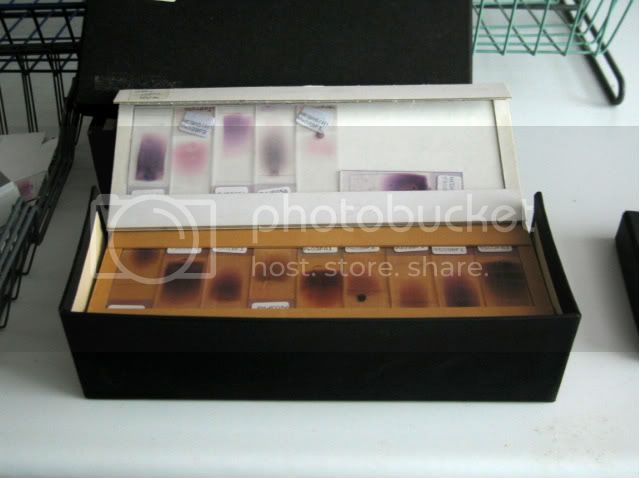 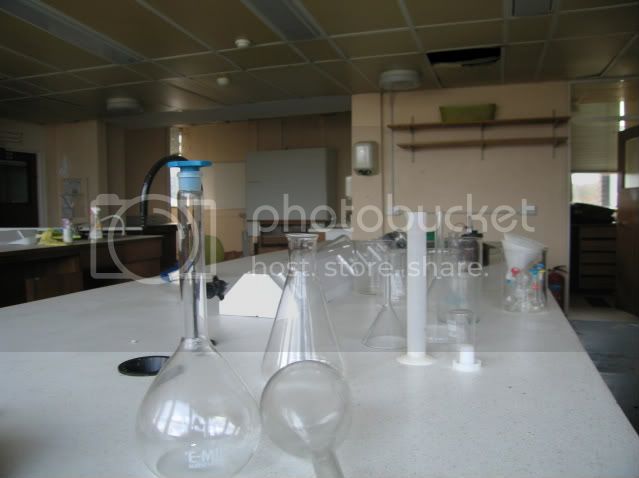 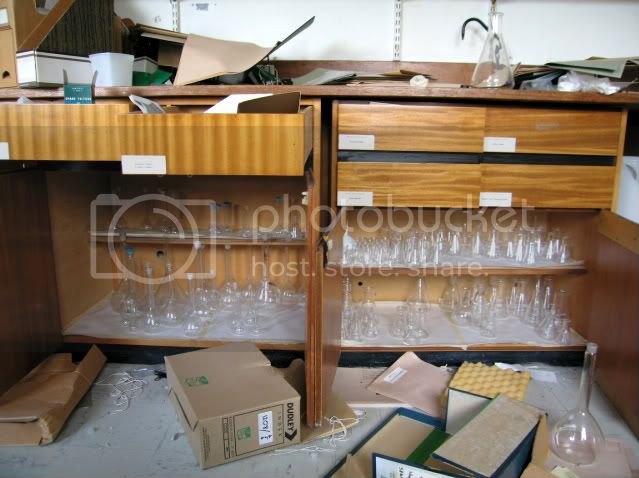 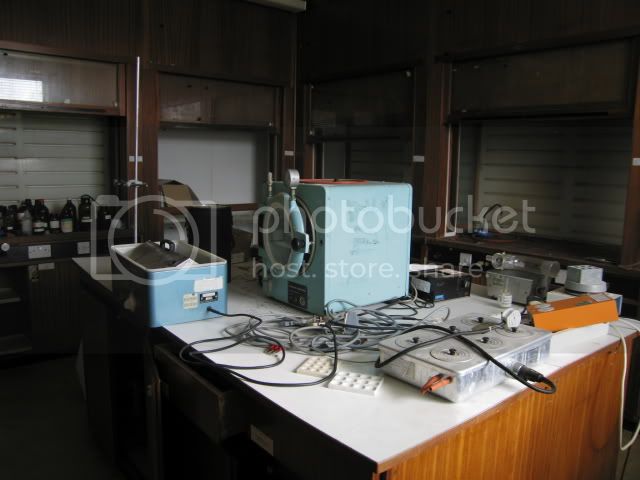 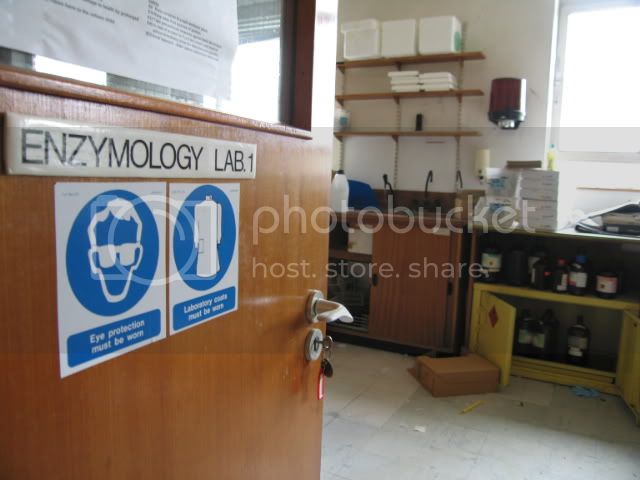 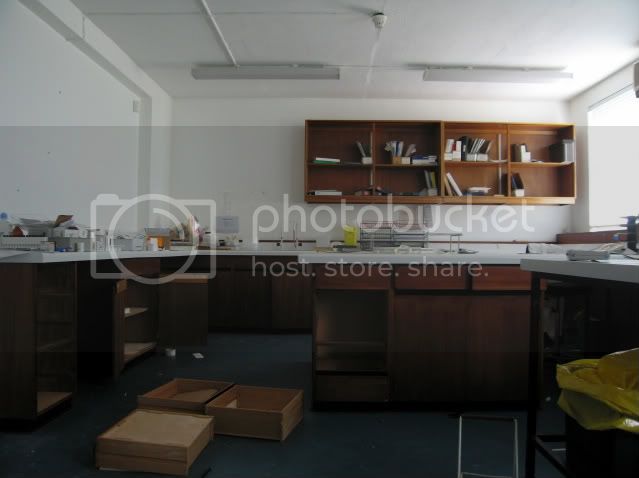 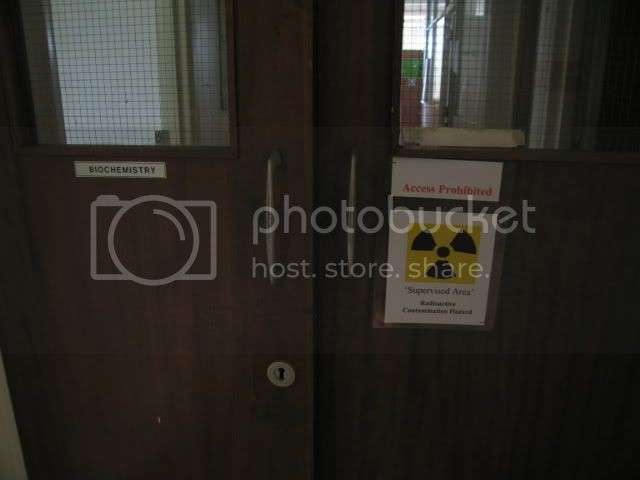 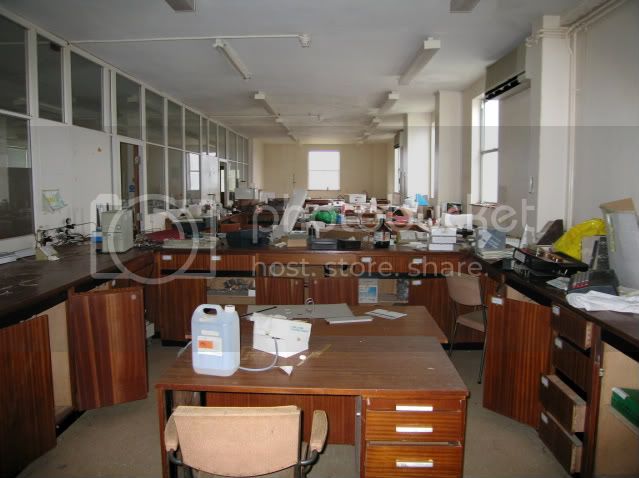 12. A small selection of the chemicals on offer. 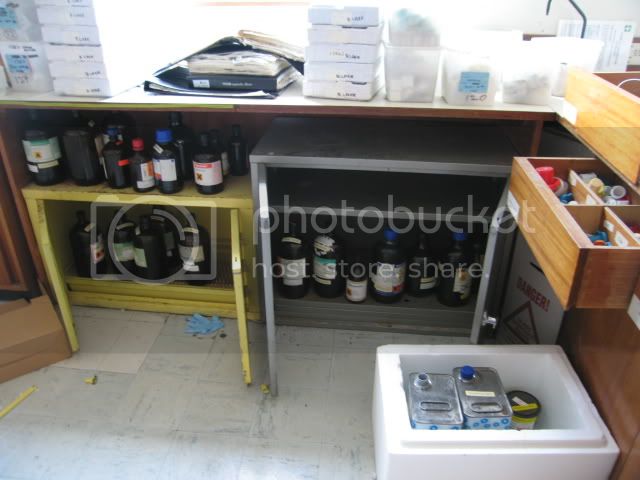 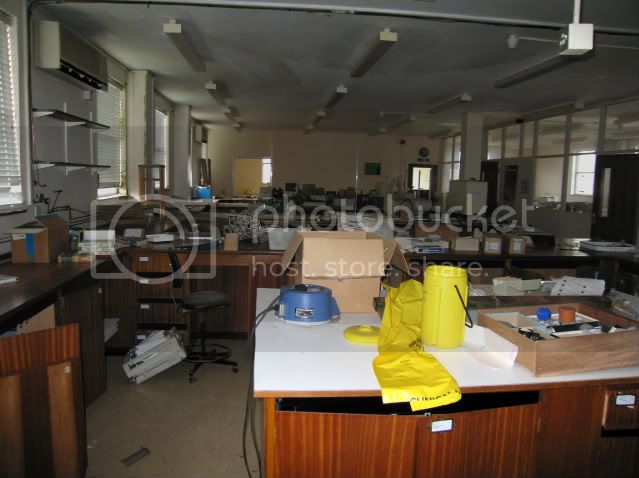 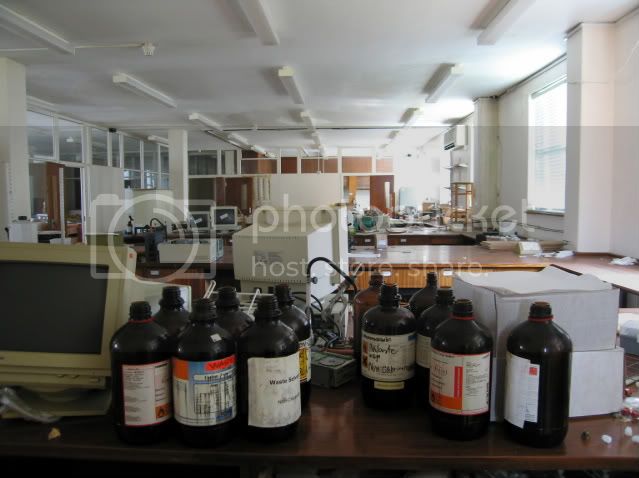 Onto the basement animal testing labs and observation rooms. 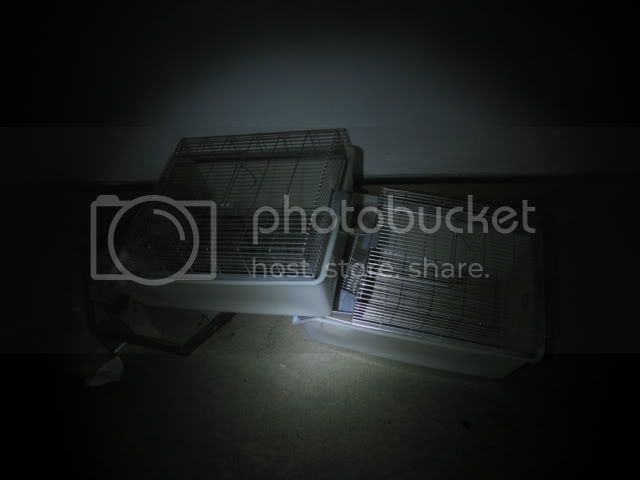 16. Would hate to think WTF went on down here. 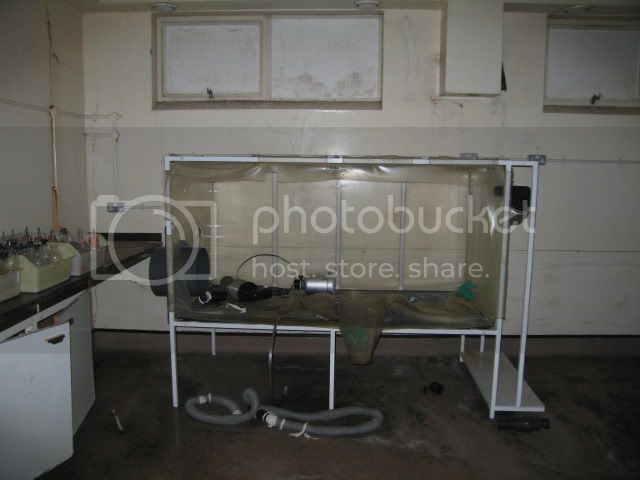 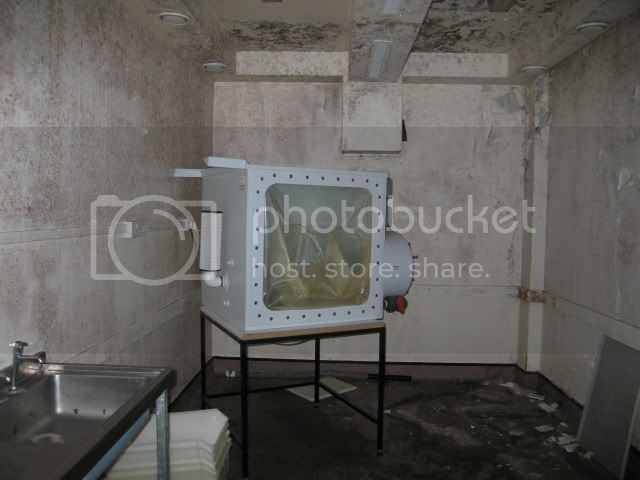 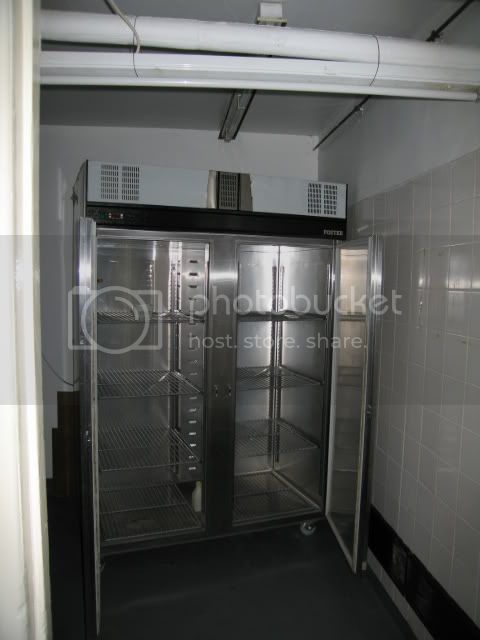 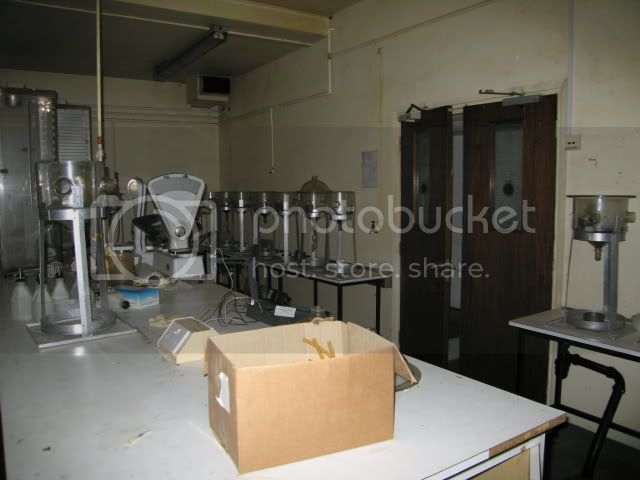 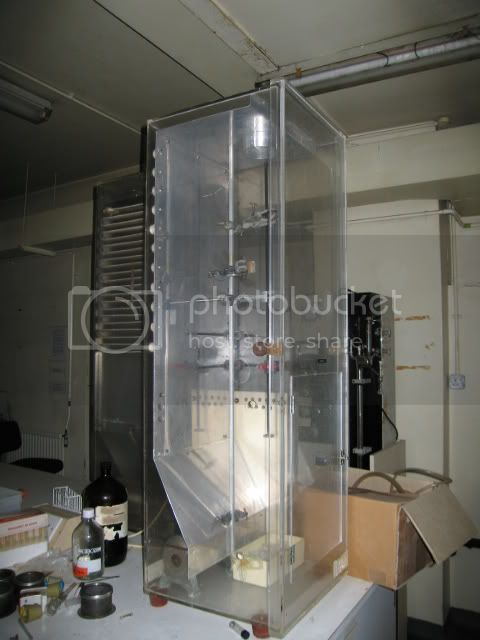 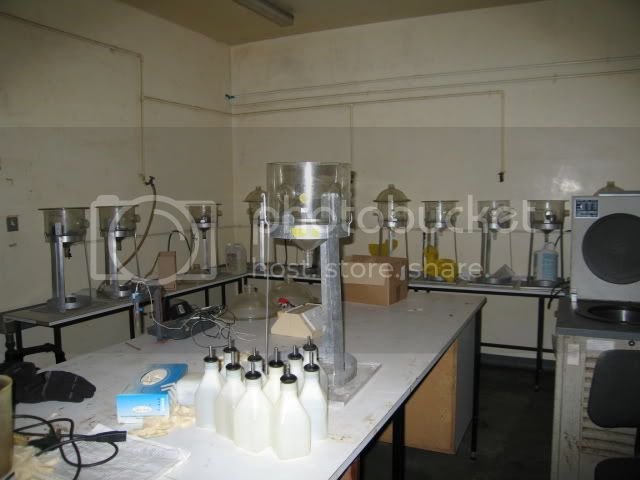 Wow - nice one Professor! The objects in 19 and 21 look like blenders and make me slightly uneasy. Would love to take a visit there - was the building itself interesting at all, architecturally I mean?

Another excellent report Professor! What a wonderfully interesting place - if a little morbid. Like the old furniture and all the fancy glassware

give that guy an award!

Its an insanely good place!

Wondered how long it would be before someone posted this. Anthillmob and me discussed this one a while ago and it looks as good as it promised to be. Thanks for the pics....
GDZ
C

Some great,if disturbing shots into a a world most,(myself included) know very little about.
Shots sixteen and seventeen look most disturbing,I find it hard to imagine what induces a person to apply for any kind of position,that demands the causation of pain to any sentient being.
But! of course there are things I do not know of,nor understand.
Thanks for some excellent shots into the great eneffable.

What an amazing explore! I'm flabbergasted to see what's been left behind, all those chemicals

I don't think that I could bear to step foot into such a horrid place so well done for getting such great pics.

muppix said:
Wow - nice one Professor! The objects in 19 and 21 look like blenders and make me slightly uneasy. Would love to take a visit there - was the building itself interesting at all, architecturally I mean?

Objects in 19 and 21 had low dose, medium dose and high dose on them and outlet pipes with taps on them, so I guess they were used to administer different dosages of something toxic to the animals?

Building itself is typical 60's so architecturally it is lacking somewhat. When the site is redeveloped the council planning officer has decreed the building must be demolished due to contamination.

godzilla73 said:
Wondered how long it would be before someone posted this. Anthillmob and me discussed this one a while ago and it looks as good as it promised to be. Thanks for the pics....
GDZ
Click to expand...

ahh so this is 'the one' we know of. excellent pics. now i have to go there.

Are you sure that the workers hadnt gone to lunch ?It looks like absolutely nothing was taken to be re-used.

professor i m unable to reply to your message personally for some reason. slowness. thank you AND WILL KEEP inmind

Both amazing and disturbing.

Wow, thats amazing. I'd be soo careful going somewhere like this, because by the looks of it, someone else has been in before you and ransacked it somewhat. You never know what crazy chemicals are lurking

), what a horrible place it was though

a stupid fact. a girl i work with once went for a job interview there when she was younger [in the office not the testing labs]

Fantastic report dude! I've just been to a similar facility at Houghton Grange, although they've left a lot more goodies behind here! Nicely written
You must log in or register to reply here.