We have had our eye on this one for a while,but in the space of a week they have transformed these lovely semi detached Victorian town houses to a state of nearly complete demolition.This is in the pursuance of the proposed Derby inner ring road which is still awaiting approval,finance and for work to start after about 30 years.Perhaps the council thinks that if they smash the place up a bit,the government will give in and pay for it sooner.We only wished we had took our cameras last week as we would have covered them whilst still intact.Most lately these houses were used by the Social Services Department for one of their projects.
Team members were DRAMA QUEEN,TIMEWARP and JOHNO23.

Here are a few pictures of whats currently left of the place. 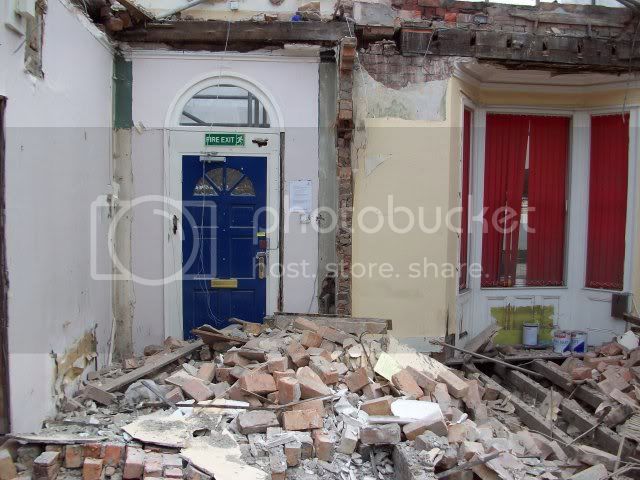 An interior view from the rear yard. 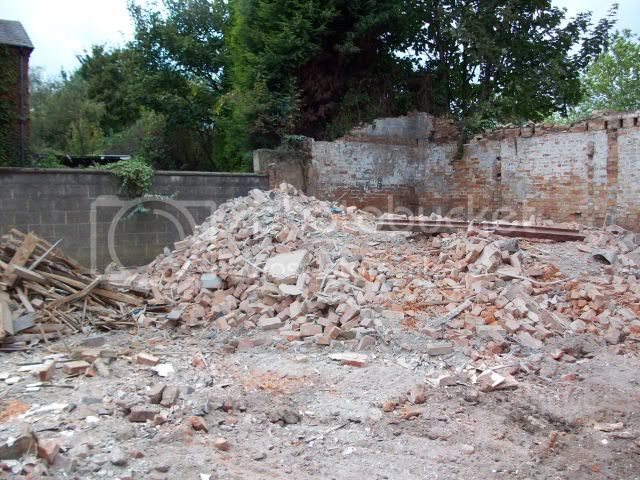 This was the stables. 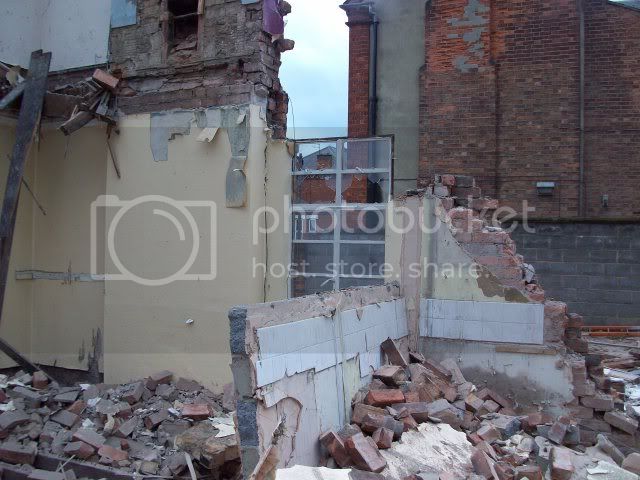 Side view of interior South wall from within rear room area. 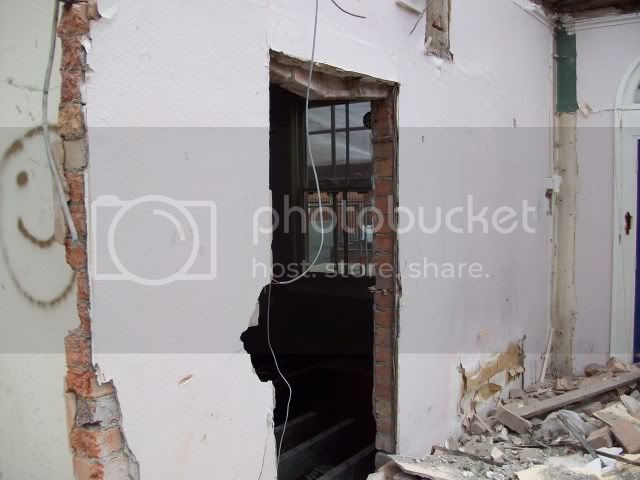 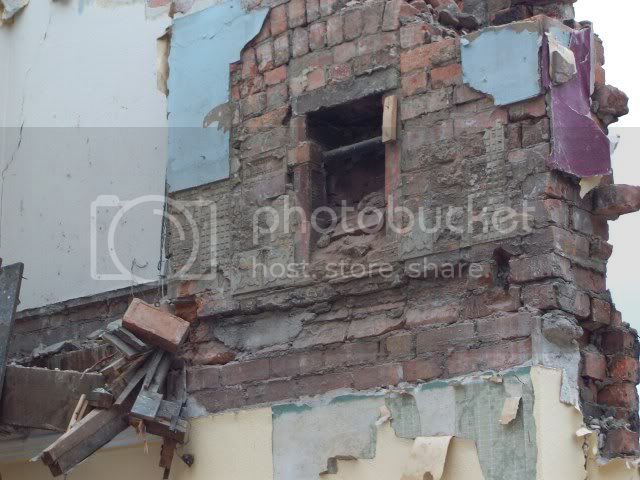 An original Victorian fireplace in one of the upper rooms,once a bedroom. 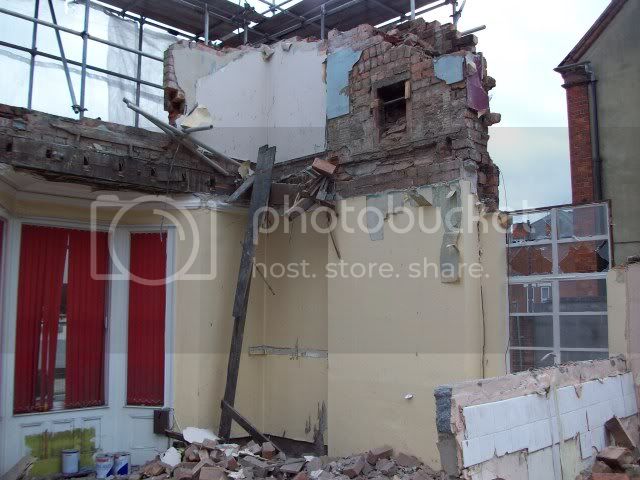 Another view of fireplace from further back,giving some perspective. 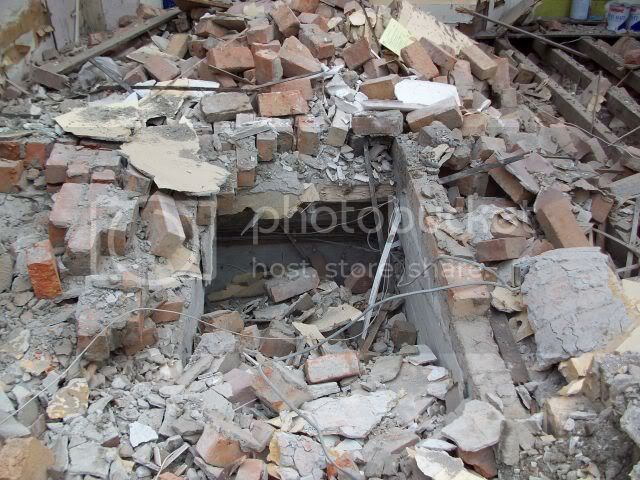 Entrance to the cellar,notice how the lightbulb has remained intact, somehow 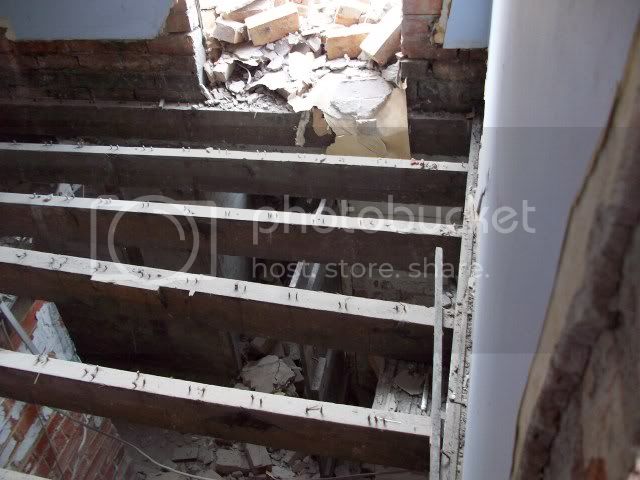 View down into cellars,note old door with equally old lock. 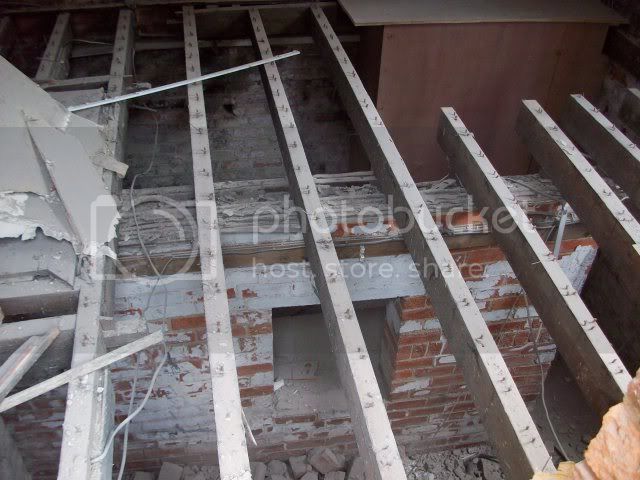 Further view into cellars,with strange hatch cut out of wall. 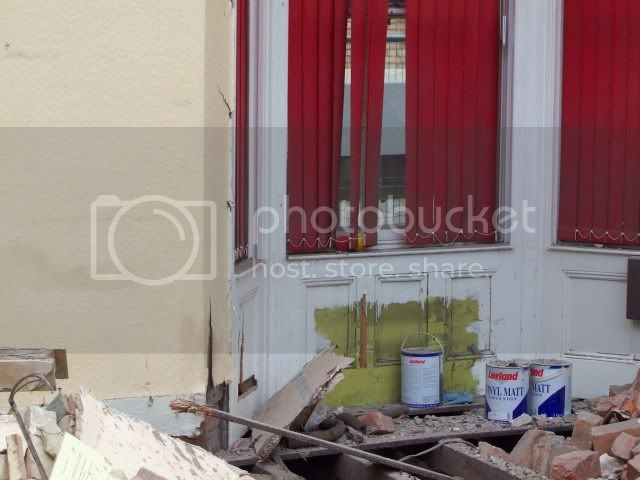 Front room,once a lounge,looks like they found the paint to finish the wall. 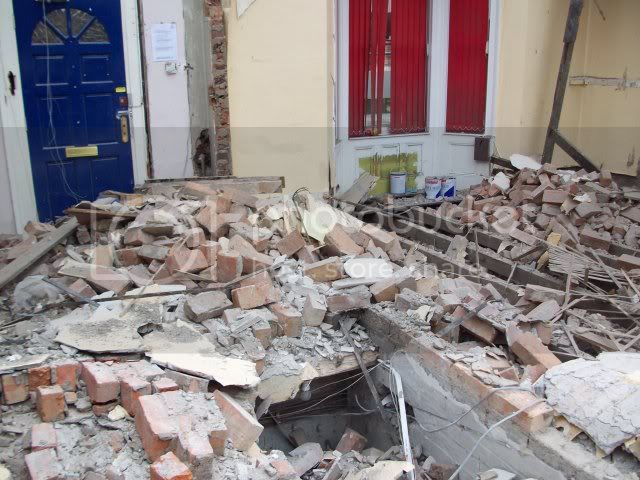 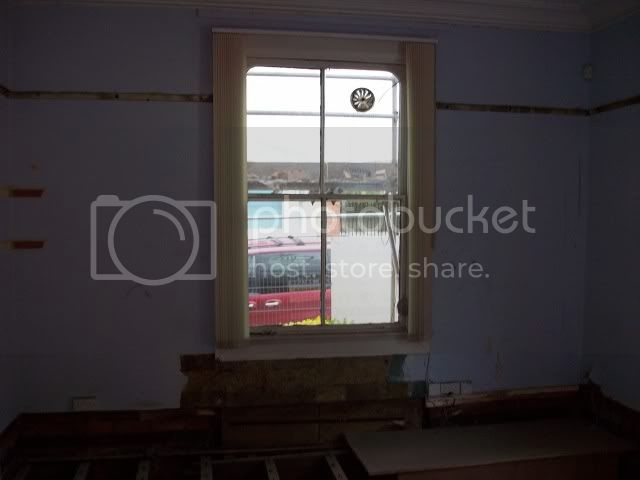 Another front room with what looks like its original windows. 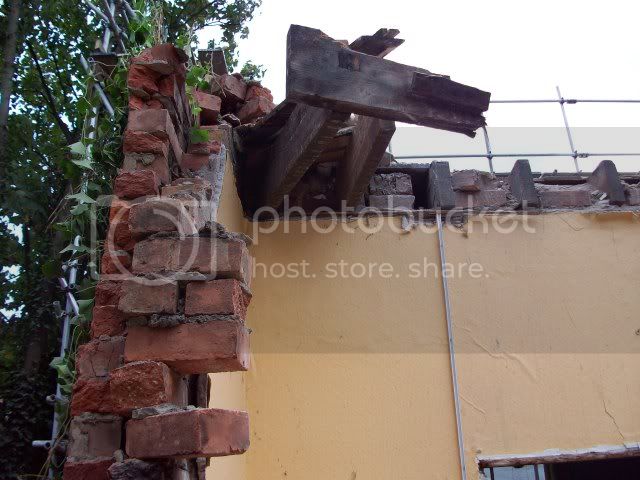 Part of the upper floor,precariously balanced. 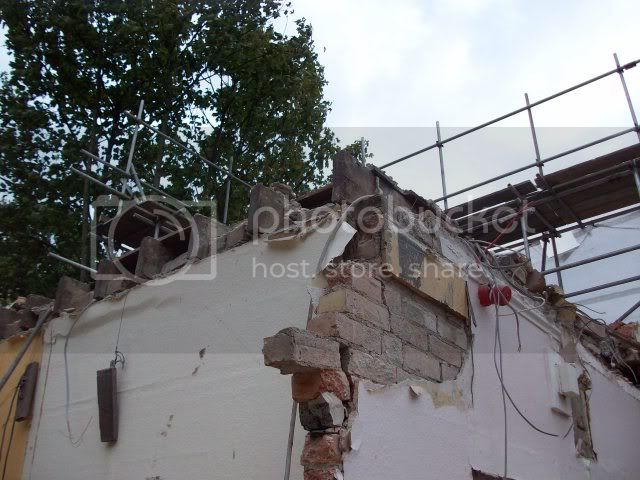 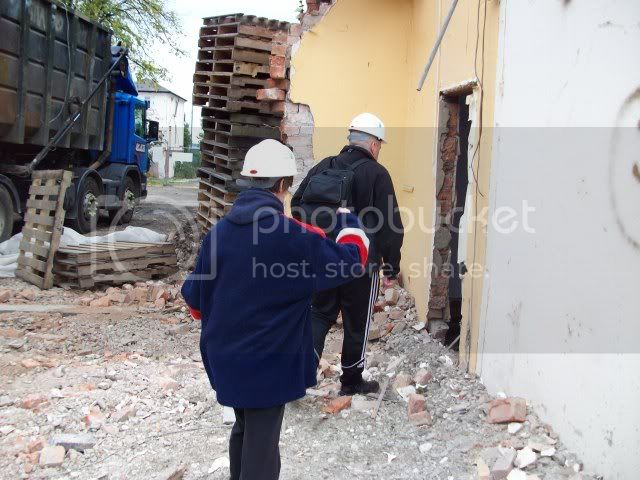 Johno23 and Timewarp go to investigate yet more rooms.This was a helmet job

Although this was perhaps not the most in depth explore we have done due to the demolition,the following find made it wholly worthwhile for us.Just as we were about to leave we discovered this old book lying in the dust. 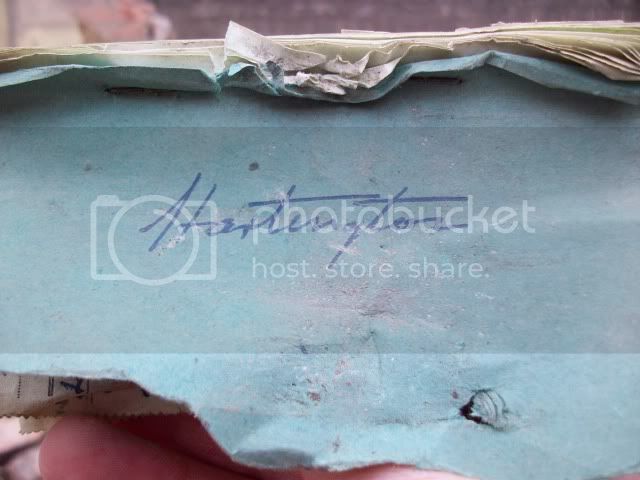 The front cover,not much to look at. 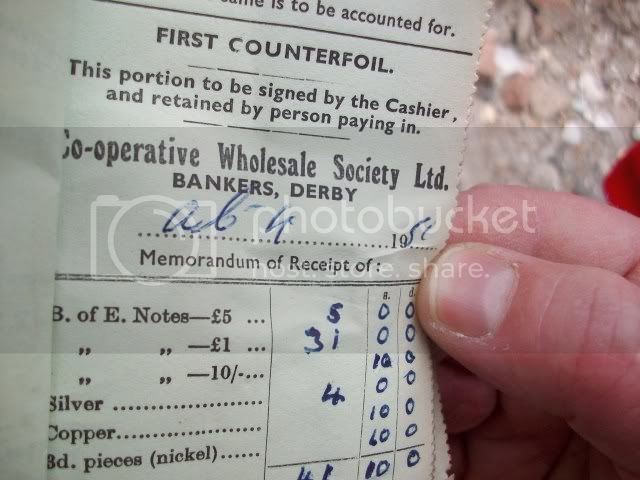 But inside was a different matter,a Cooperative society accounts book from the 1950`s. 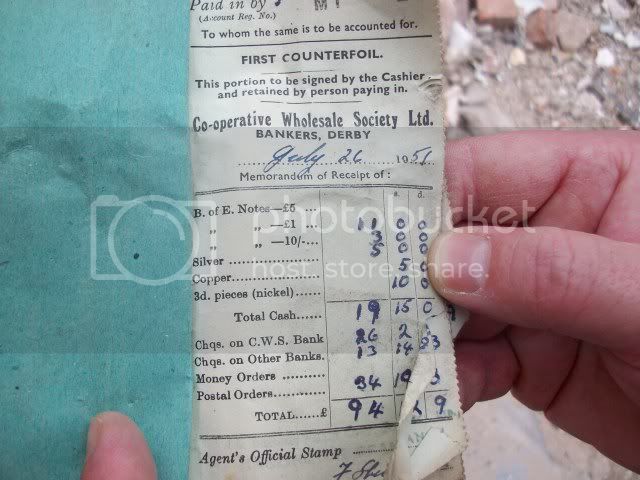 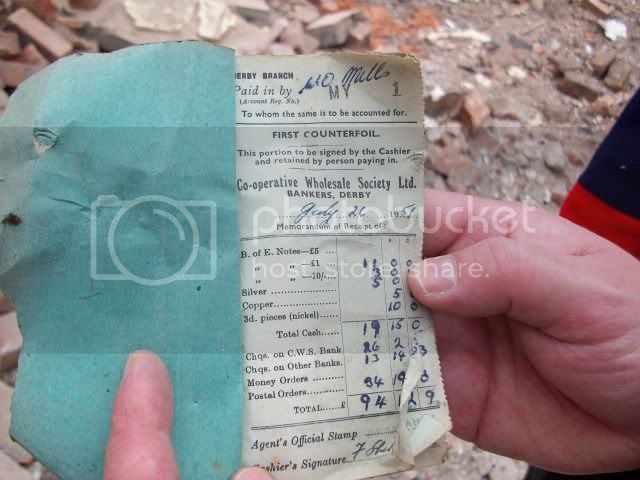 This little book made it all worthwhile

This is one of many buildings randomly demolished very recently for this damned ring road.The whole city centre is beginning to look like a bombsite with the amount of derelict patches of ground which never seem to get used..
Last edited: Oct 20, 2008

Nice pics, and that Co-Op receipt book was a nice find, looks like you got to photograph the place just in time. definately looked like a hard hat explore, with all those loose bricks about.

I reckon the hatch was a chute for coal into what would have been the coal cellar. That receipt book is great.

Can't believe the demo crew left the tins of paint and the blinds still in the lounge area. My local council would have stripped the place bare and shared the remains out amongst theirselves before the demo crew even got near the place, and they'd have swiped the front doors as well

Excellent pics, looks very dodgy in the parts that are still left. Nice find, shame it's nearly all gone.

Unfortunately these were due for demolition, no funny business by the council I'm afraid.

Good job you got them in time team, another thing to surprise me when I return this weekend.

Completely gone now if its the building i'm thinking of :|

No doubt they have

They are always quick to destroy buildings around here but not so quick to build anything decent or at all for that matter.Leopold Street by the way mate