Between visiting the bluey-green lake opposite High Peak College and going back to visit High Peak College itself earlier this month, ekp09, Apopcalyptic, JCB Man and myself took a trip to Stockport where there are some air-raid shelters. There were 6 in total but 3 got demolished, and 1's a museum. We wanted an adventure so went to the derelict ones.

For history of those air-raid shelters, here's a link - http://www.derbyscc.org.uk/caving/otherug_stockport.htm.

The first one we visited was Dodge Hill.

Once we'd got in, we found ourselves in a dark and damp environment. First, we headed to one of the main entrances. There were 5 in total. 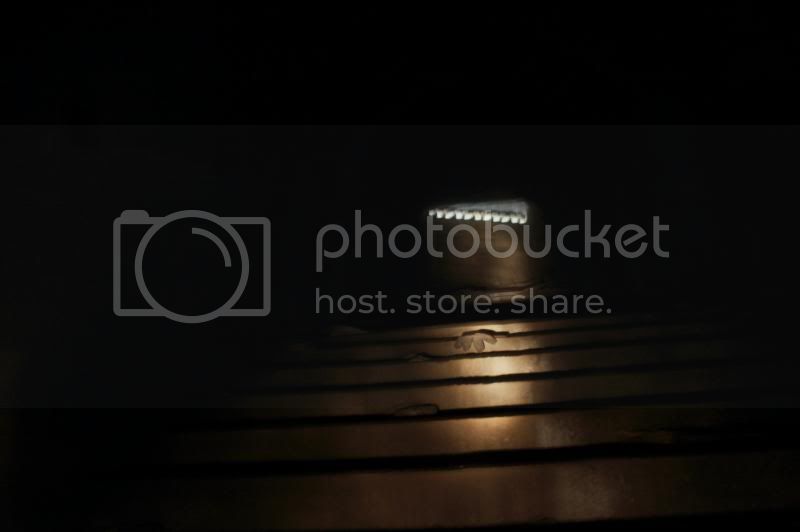 What I found really strange about this entrance was that you could hear people talking outside, so imagine what they thought when they heard voices from inside if they didn't know this was an air-raid shelter?!

There were still some original features in it, such as bedstands. There was some rubbish too, and some old crisp packets. 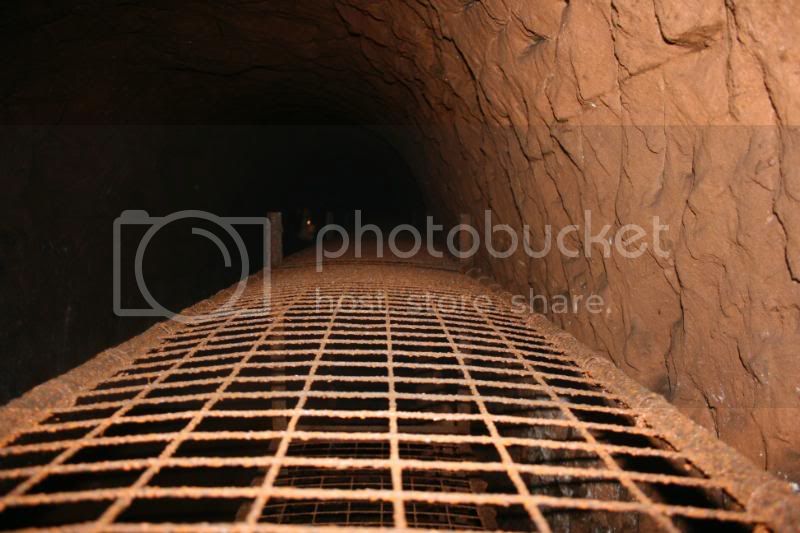 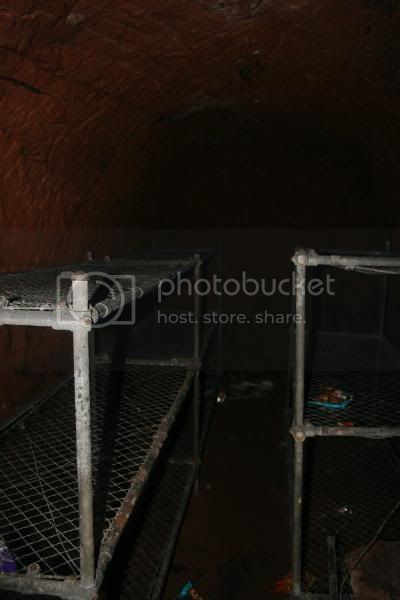 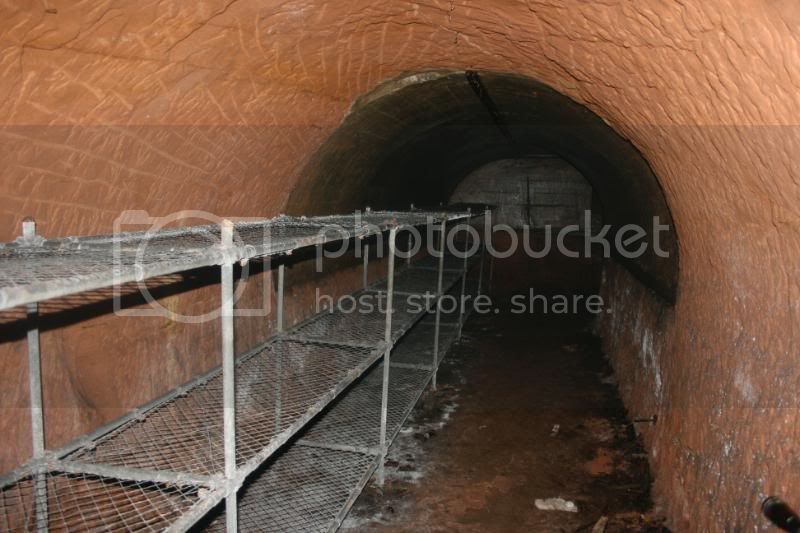 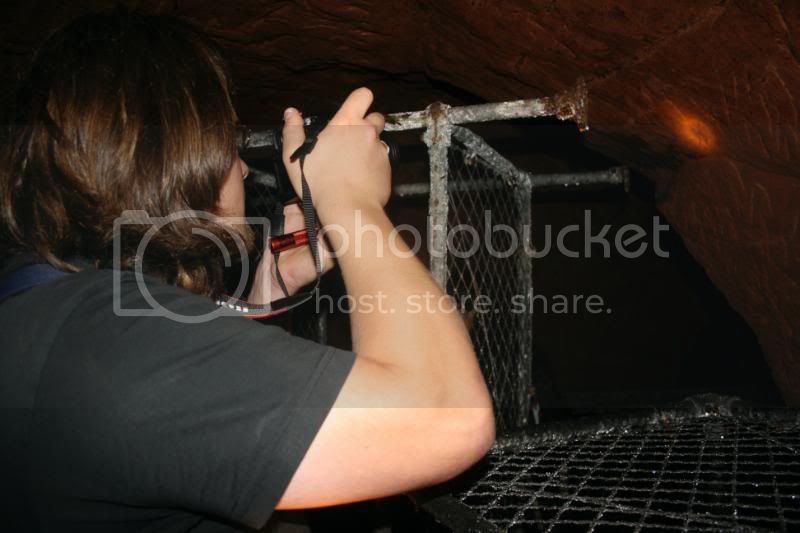 After wondering around for a while, we found another bricked up entrance. On the otherside of this entrance would be a cobbled road. 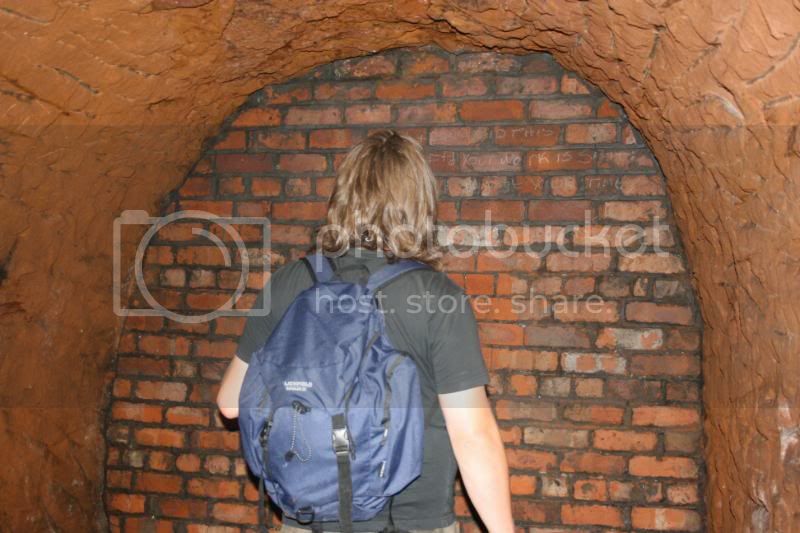 Even though this photo was an accident, I like the way it came out. 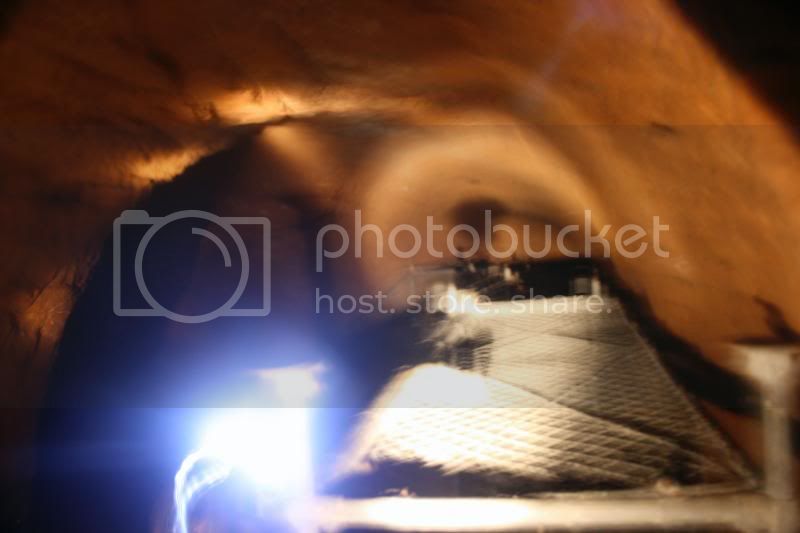 The toilets were numbered. Also, they weren't that luxurious either, just a bucket. 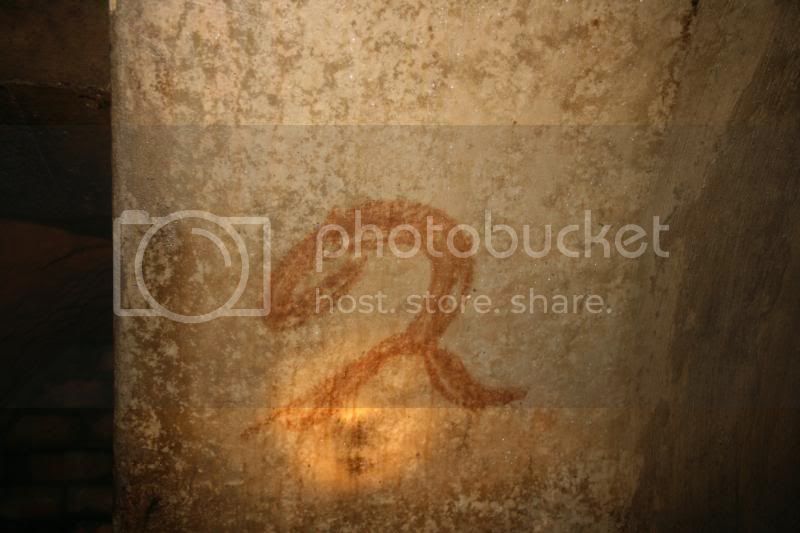 When we had finished looking around, we then went to see where two of the entrances were on the outside. 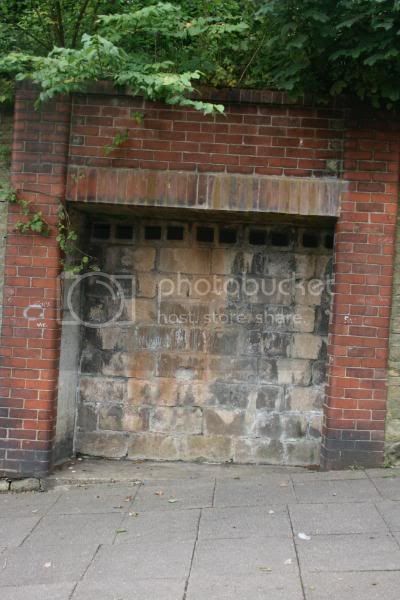 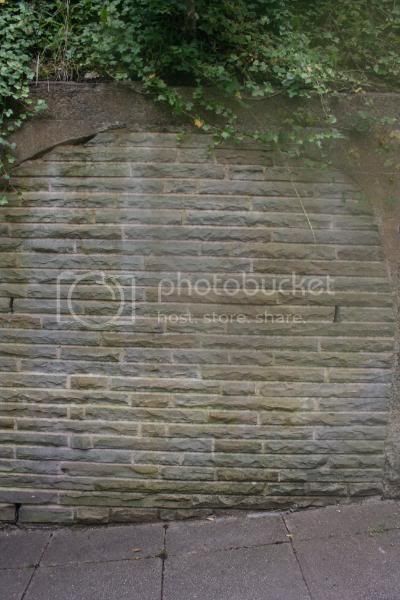 The air-raid shelter ran across from just out of shot in the trees on the left, through to again out of shot on the right. As you can see, the M60 runs right past it. 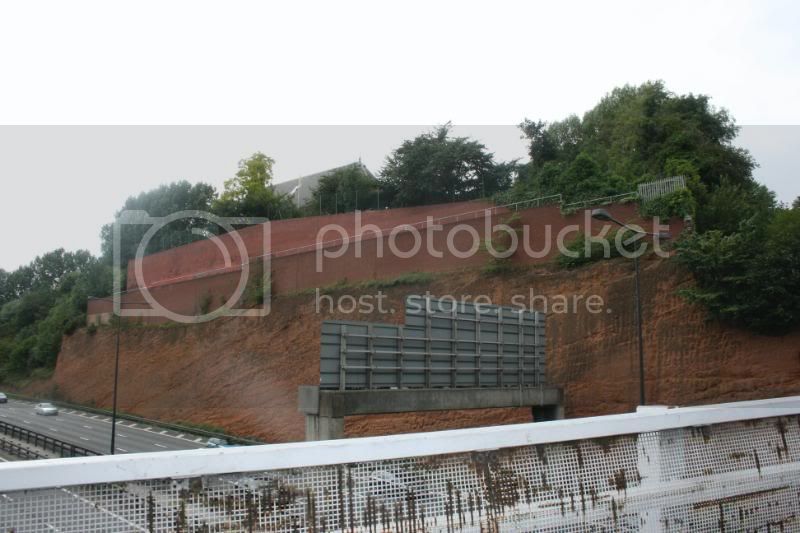 After having a bite to eat, we went to Brinksway.

Apopcalyptic had been warned about the air in this shelter which made us wary of it. After we got in and found our bearings, we started to wonder around. First of all, we came to the toilets, which were more luxurious than those at Dodge Hill. 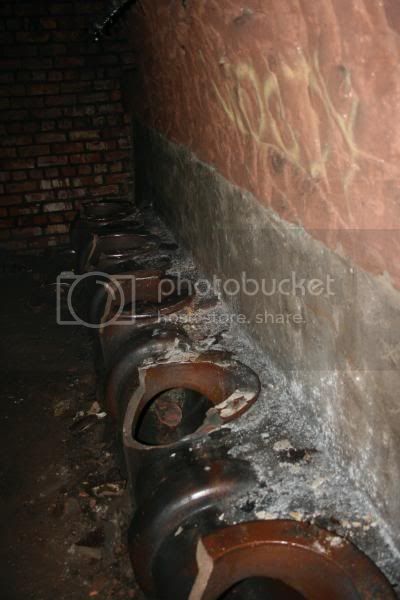 We could tell that bad people had been in before us as a few bedstands were overturned, which made navigating around more interesting. We had torches, so all was good. 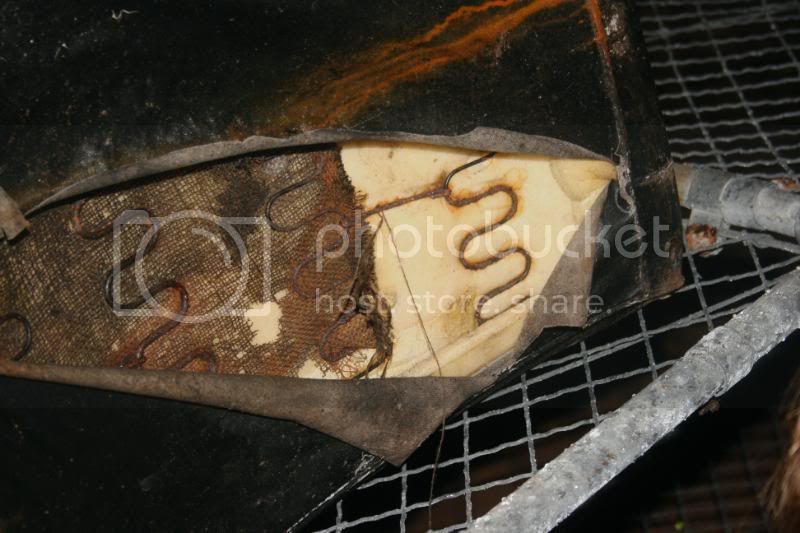 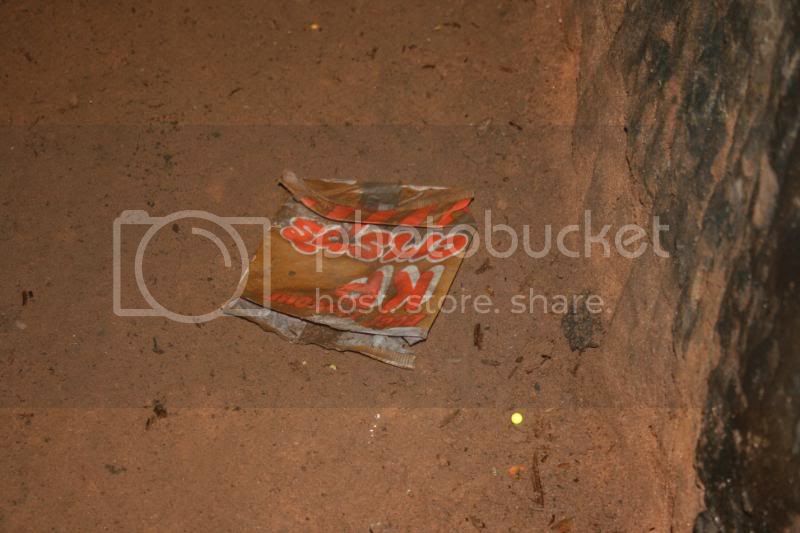 Anyone for a part of an old bike? Might be a mini unicycle, even. 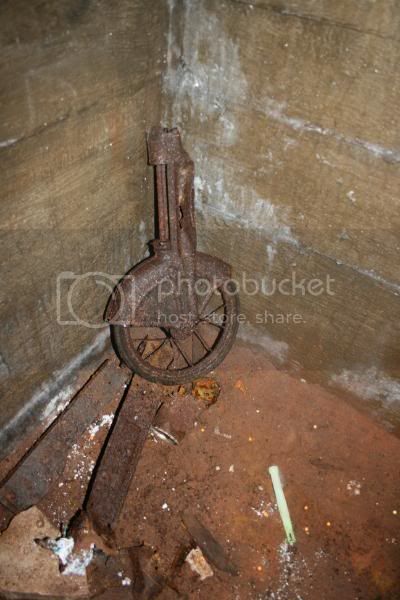 Close-up of rust on a bedstand. 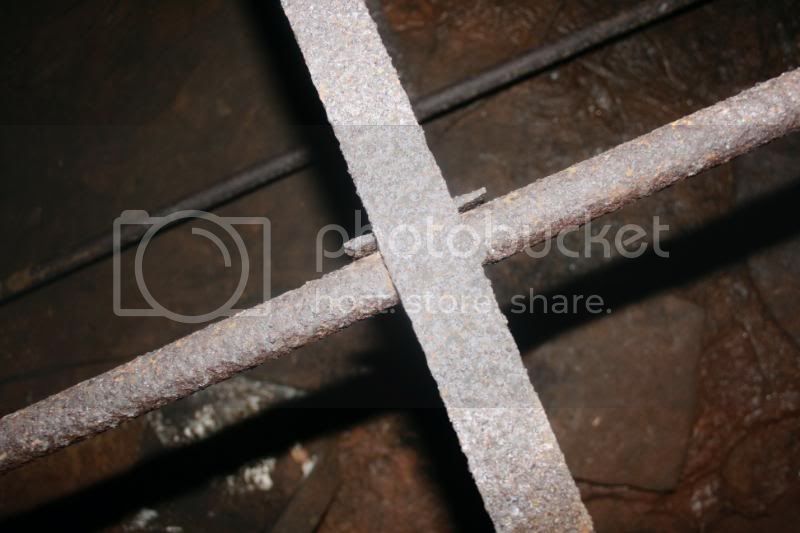 There were other signs of people here before us, grafitti on the walls. 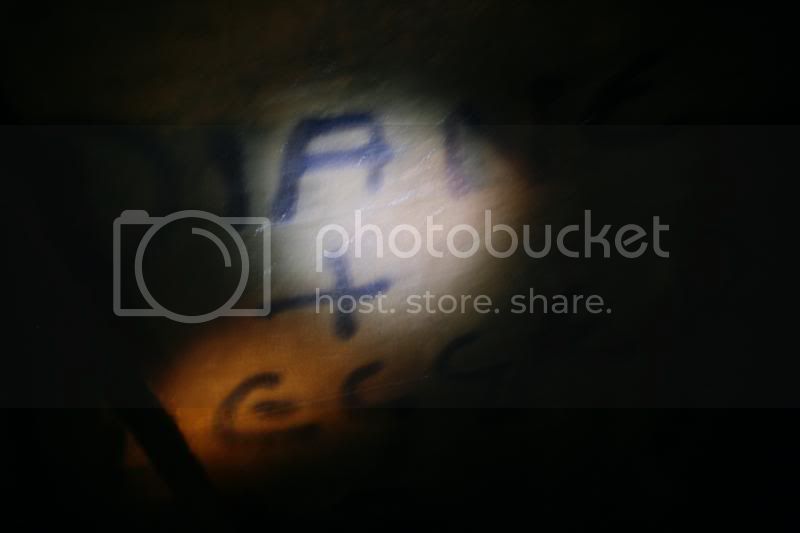 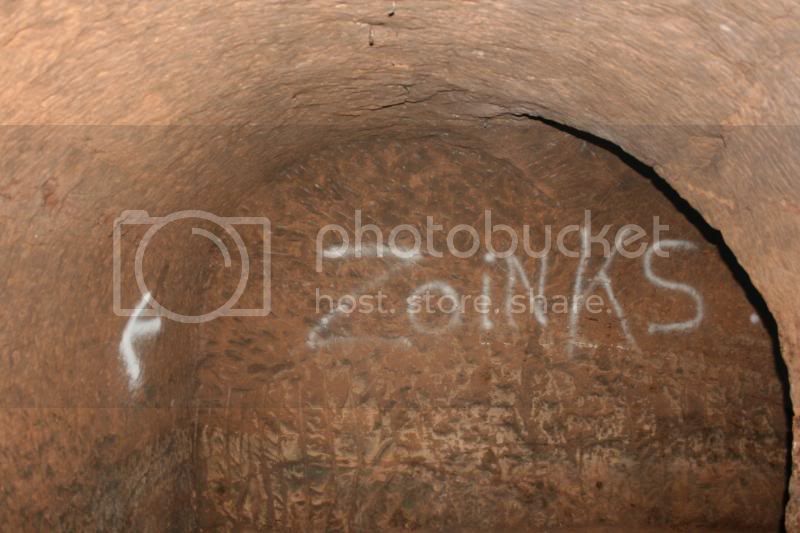 There were arrows such as the one above, they were helpful in finding our way around. We loved the word Zoinks. 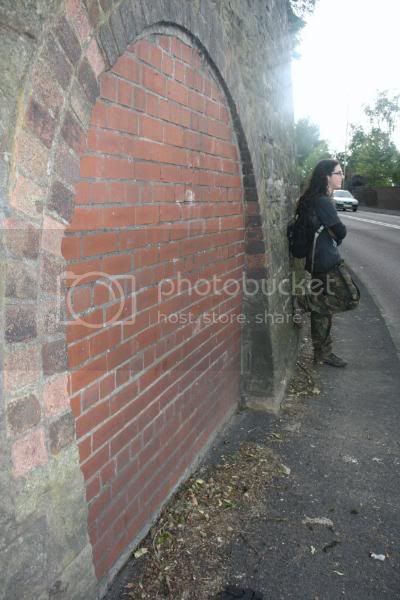 Then we saw a plane flying overhead! ...luckily it wasn't a bomber, so we were alright 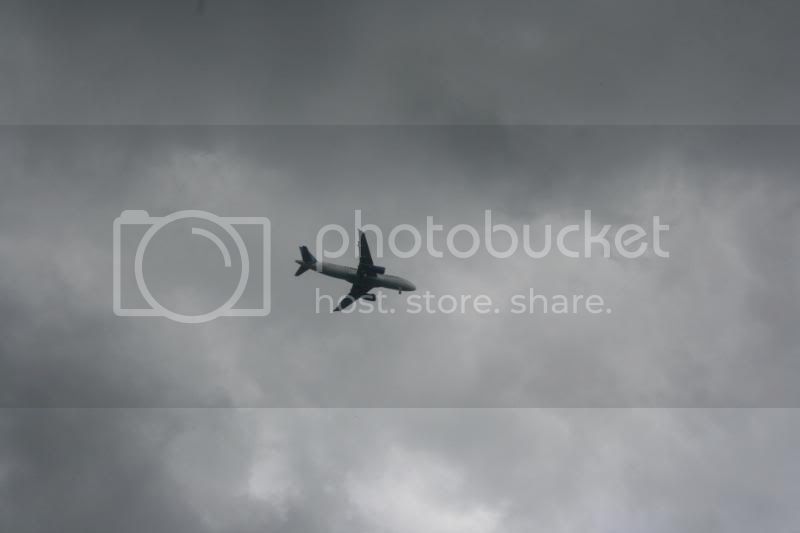 I think Apopcalyptic will be adding photo's to this thread in the near future.

very nice place. so where this manchester?
love the toilets, air raid shelter have such a feel about them, u just know life and death has happened there.
kool pics
kelly

It's Stockport, so near Manchester yeah, after I stopped thinking that hundreds and hundreds of people used these shelters and that people may have even died in them, I learnt to enjoy it. Also, it did have an atmosphere to it, was quite eerie to hear the voices outside.
And thanks for the compliment

james.s - I know you are I hope you have as much fun as we did! I plan to make a return trip sometime, KingofDerby's very interested to go.

Great place to visit here.
Wasn't it boiling hot in Brinksway? It was when i went, very stuffy.
Dodge Hill is the best to explore i think. Much more intact as well.

Thanks Brinksway was a bit hot and stuffy, but we were warned about the air. Yeah, Dodge Hill was a better explore, but we wanted to see what Brinksway was like too.

Jimba said:
Thanks Brinksway was a bit hot and stuffy, but we were warned about the air. Yeah, Dodge Hill was a better explore, but we wanted to see what Brinksway was like too.
Click to expand...

Did you not know about the abandoned railway tunnel that runs right underneath Dodge hill air raid shelter?
You were literally a few feet away from the portal.

It's well worth looking at for anyone going to do Dodge hill, it's got some interesting supports and stuff inside
Last edited: Aug 19, 2009

phill.d said:
Did you not know about the abandoned railway tunnel that runs right underneath Dodge hill air raid shelter?
You were literally a few feet away from the portal.

Yeah, Apopcalyptic told us about it but we didn't fancy it. maybe next time

Nice, I loved exploring Brinksway. Best not to do it on your own though! I quite enjoyed having a rest and smoke whilst watching the world go by out of the missing brick. Shame I didnt get to do Dodge hill too, but the mrs wasnt having it.

Let me know when, I'll come and meet you.

And yes, my photos are coming. I wasn't overly impressed with Brinksway tbh. It was 'too far gone' for me really.

However, Dodge Hill I loved, and will be visiting regularly to hone my complete natural darkness photography. The pic that Jimba said I was lightpainting in, I was mere trying to focus! lol

Apopcalyptic said:
The pic that Jimba said I was lightpainting in, I was mere trying to focus lol
Click to expand...

That map makes it look a lot bigger than I remember it!

Haven't been to Brinksway or the proper museum despite "meaning to" for the past 3+ years and working in Stockport!

double-six said:
That map makes it look a lot bigger than I remember it!

Haven't been to Brinksway or the proper museum despite "meaning to" for the past 3+ years and working in Stockport!
Click to expand...

It's bizarre that the scale is only 50 metres. Dodge Hill really seems tiny (particularly compared to Brinksway), but the capacity still would have been around 1000 I would have thought.