Warning - this resembles a proper report. As such, there's some reading involved..

Glasgow's second infirmary was initially proposed in 1846 to complement the Royal and as part of a plan to relocate the iconic Glasgow University. Lack of funds prevented any action being taken until 1864 when a teaching hospital was planned to form part of the new university buildings at Gilmorehill. In 1867 John Burnet Sr, father of Sir J. J.Burnet, produced plans for the hospital on a pavilion layout. The Western Infirmary opened in 1874.

The block plan consisted of a central administration section with services behind in the Scots Baronial style, flanked by two cross‑plan ward blocks. Again a lack of funds hindered the project and only part of it was built in the first building phase from 1871‑4. The John Freeland bequest of £40,000 allowed the completion of the original plans in 1877. 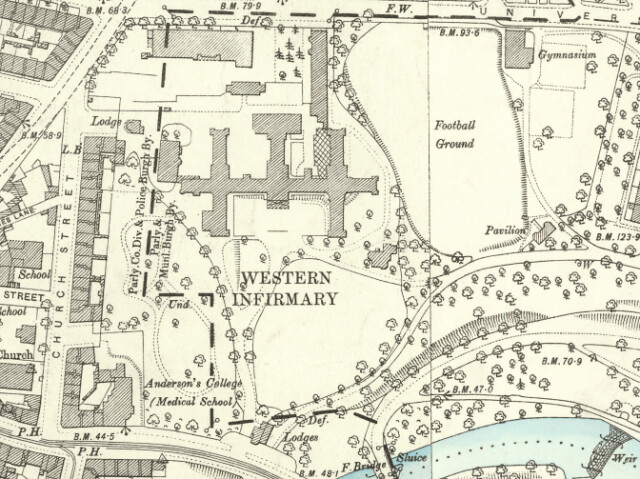 Ordinance Survey map showing the original Burnet building as it was laid out in 1893. Here you can see the aforementioned central block and flanking wards. 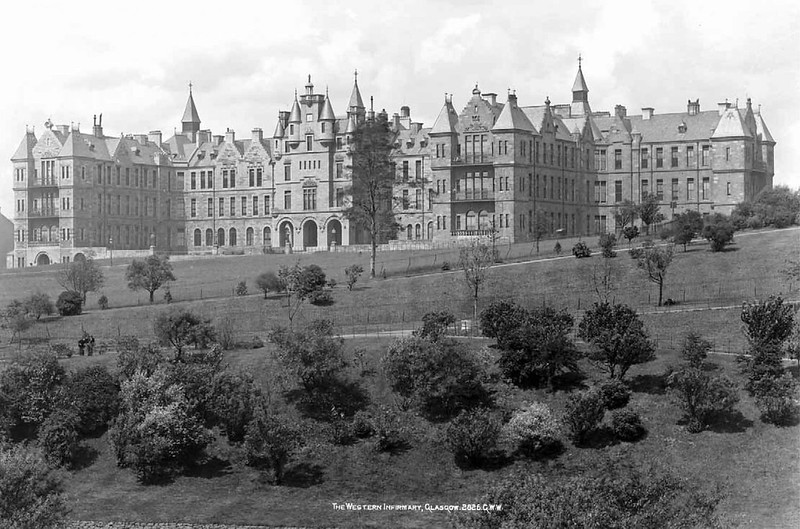 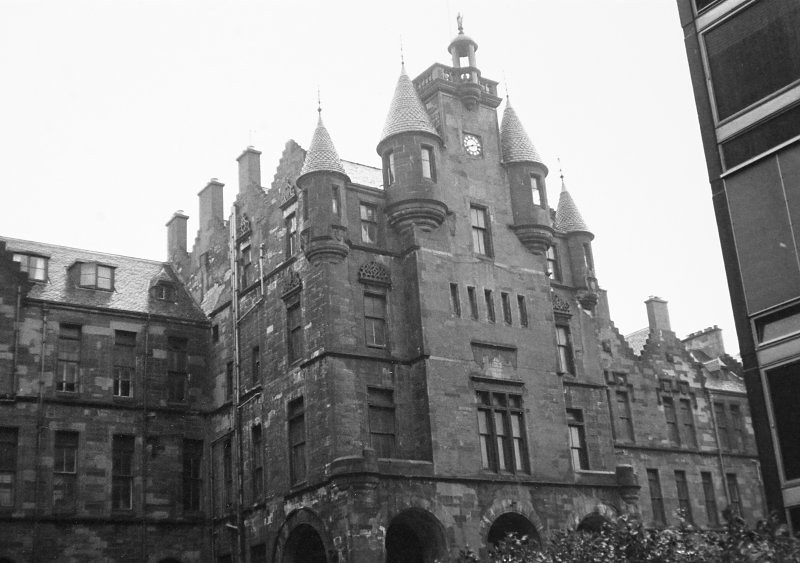 In 1892 Dr D. J. Mackintosh was appointed Medical Superintendent. He was to be one of the leading figures in Scottish Medicine and Hospital design at the turn of the century. In 1905 a new out‑patients’ department was completed, the first of many extentions to the hospital. Also known as the Western Infirmary Outdoor Dispensary or just the 'Dispensary', it was designed by Sir J. J. Burnet - its Scots Renaissance manner providing a striking street frontage to Church Street. When it opened the Dispensary comprised a waiting hall which was necessarily large since patients were not seen by appointment but on a first come first served basis, six vast interviewing rooms with examination rooms attached, an operating theatre for minor surgery and a room for surgical dressings.

Further extensions due to chronic overcrowding were completed in 1906 in the form of G Block. Construction began following the Infirmary managers concerns at the ever increasing demand on indoor accommodation due to overcrowding, particularly due to accidents. One such accident took place on the afternoon of 5 April 1902, during the Scotland v England game at Ibrox, when a stand collapsed. In all 223 patients were treated at the Western: 150 were admitted and fourteen died within the Infirmary. The 1902 disaster served to focus public attention on the need for hospital expansion and by the end of 1903 £30,000 had been raised by public appeal to proceed with the building of the north wing of G Block, which linked with the Dispensary on Church Street. This was followed with a south wing in 1911 and in 1916 a new admissions and casualty department.

The south wing of G Block included three wards: one was endowed by Mr. William Robertson, a member of the Board of Managers from 1906 and named the William Robertson Ward, the other two smaller wards on the ground floor were named the McCall Anderson Ward and the A. B. Buchanan Memorial Ward. Over time other wards were named in memory of various donors while one, the King George V and Queen Mary Ward, commemorates the Royal Visit in July, 1914. 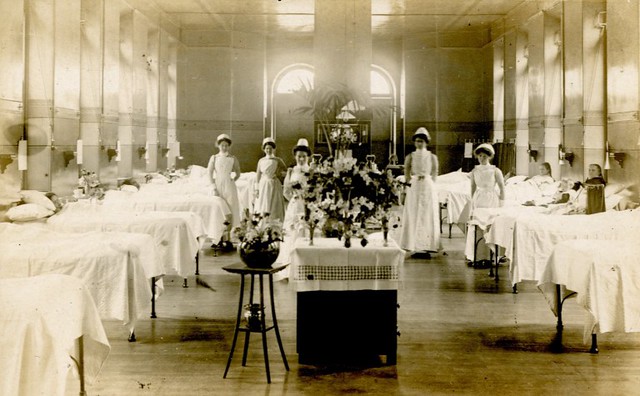 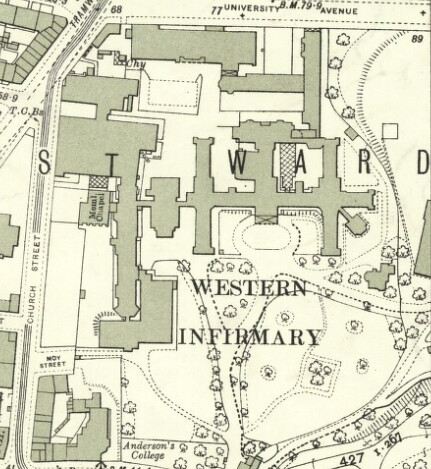 1932 OS map showing the later additions. You can see the Church Street extention here, the layout encompassing a memorial chapel with the Dispensary to the top and the north and south wings of G Block to the right, linked to the main building by the 1916 admissions/casualty dept.


More additions followed, firstly with the opening of the Tennent Institute of Ophthalmology in 1936 and then in 1938 the Gardiner Institute of Medicine, which continued the Church Street frontage in a sparing but well‑detailed fashion. The Tennent Institute, designed by Norman Dick has particularly notable sculpture by Archibald Dawson. 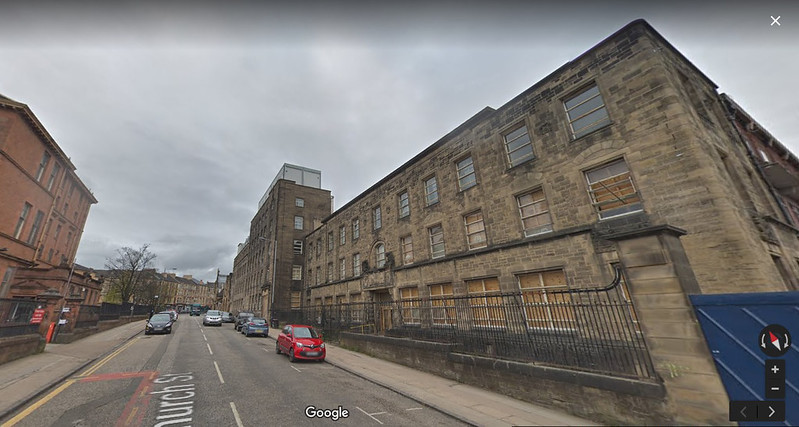 By the 1950s, it was decided that a modern complex of buildings was required due to the high maintenance costs of the Burnet buildings. A two phase programme was planned, but following the opening of the Phase 1 building, (constructed between 1965-74 directly in front of the original Burnet building), Phase 2 was indefinitely postponed, partially due to the completion of nearby Gartnavel General. Burnet Sr’s Infirmary building was demolished in the 1980s and the ruins of the north-south range are all that remain. The new 11-storey main building was designed by Keppie, Henderson & Partners. 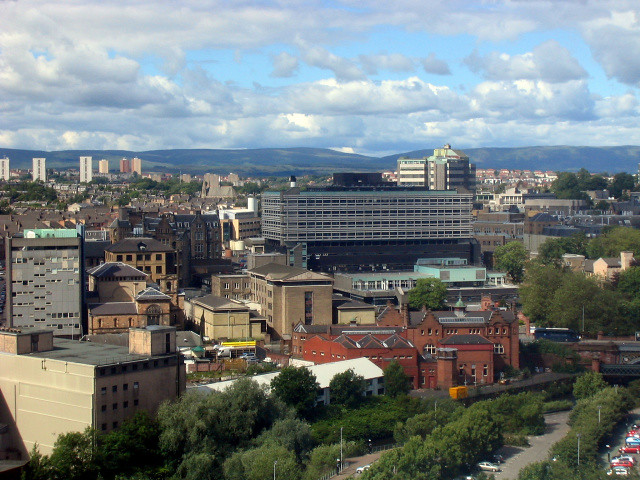 View of the Western from Yorkhill dominated by the Phase 1 Block, circa 2007 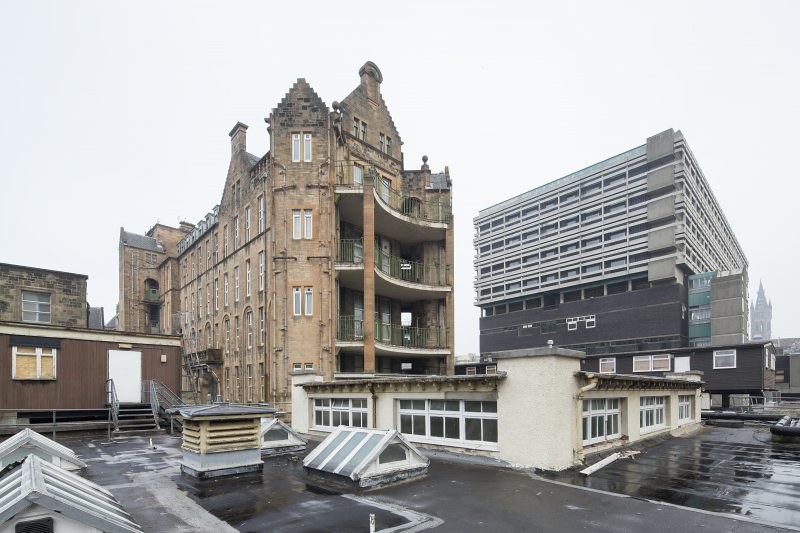 Google overhead from 2016 which shows the Phase 1 block and its relation to G Block. The area covered by car parking is where the original Burnet building once stood.

I let myself into the Western on a couple of occasions at the beginning of 2016, accompanied by the usual suspects. Although I never covered nearly as much ground as I may have liked I was able to see a substantial part focusing around G Block and the lower levels of the Phase 1 building, including one or two 'bolt down the corridor, here comes security' moments. 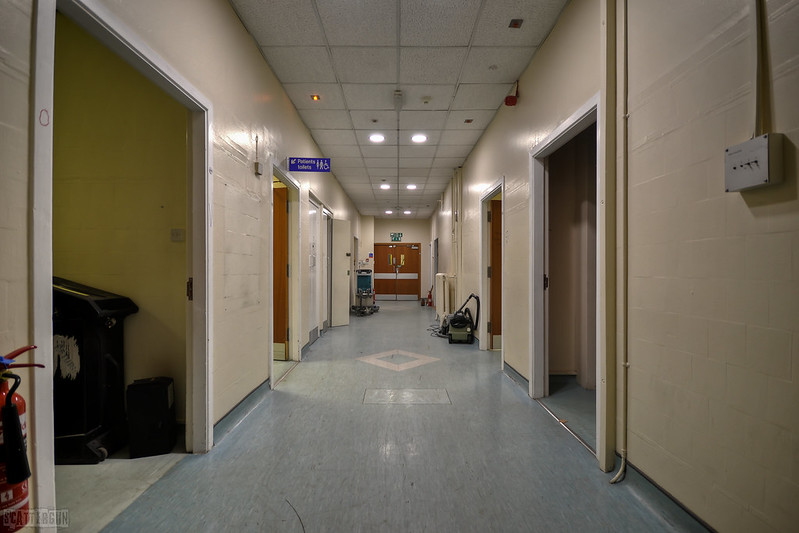 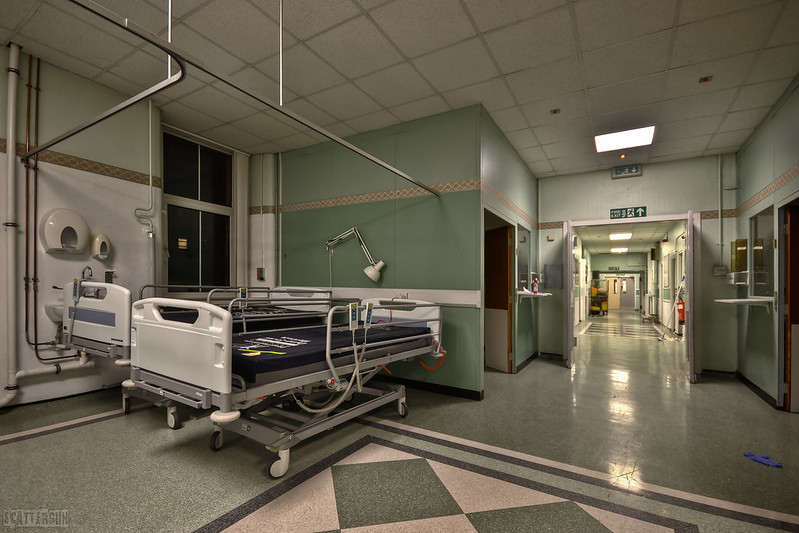 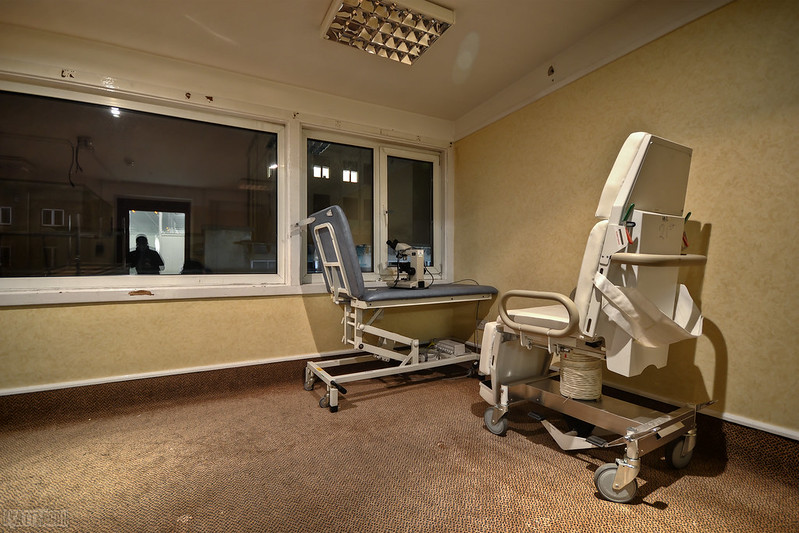 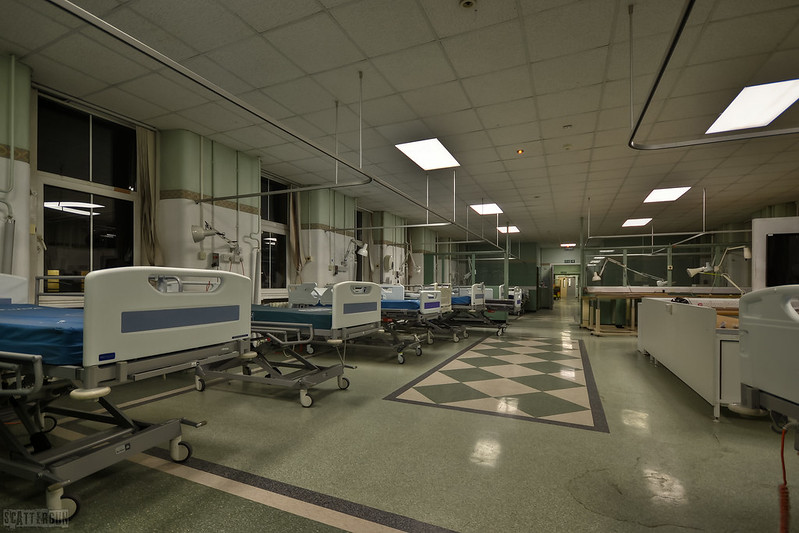 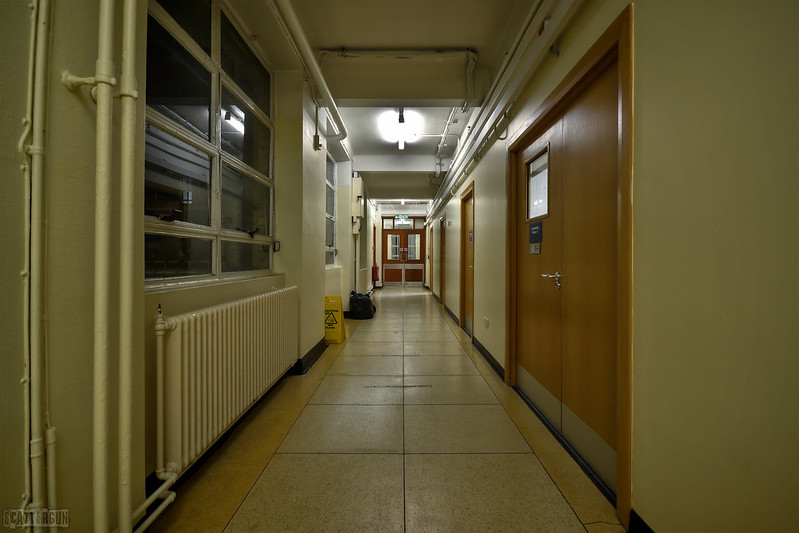 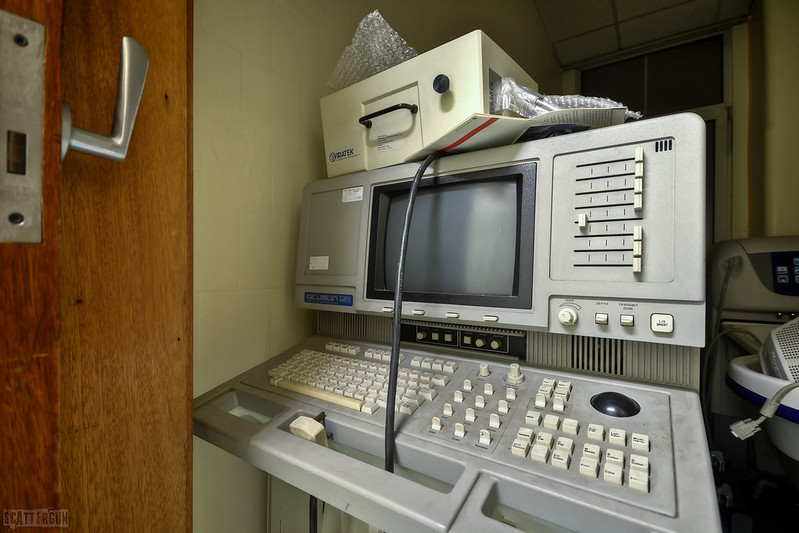 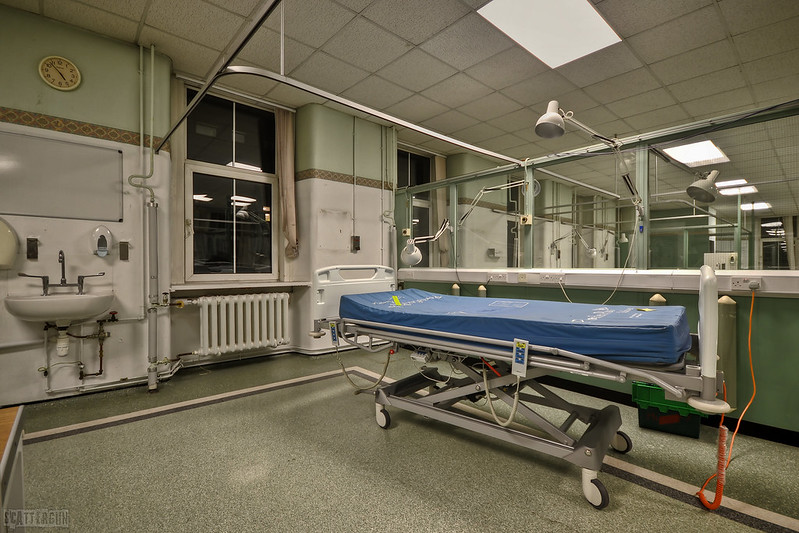 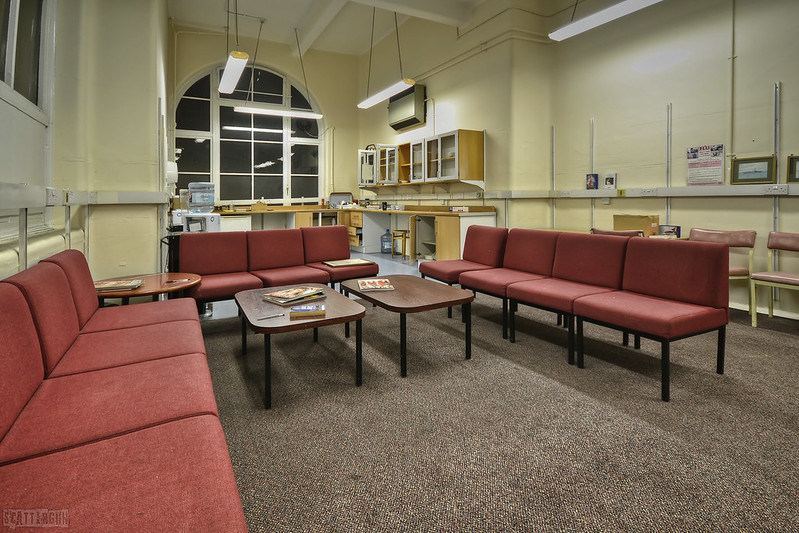 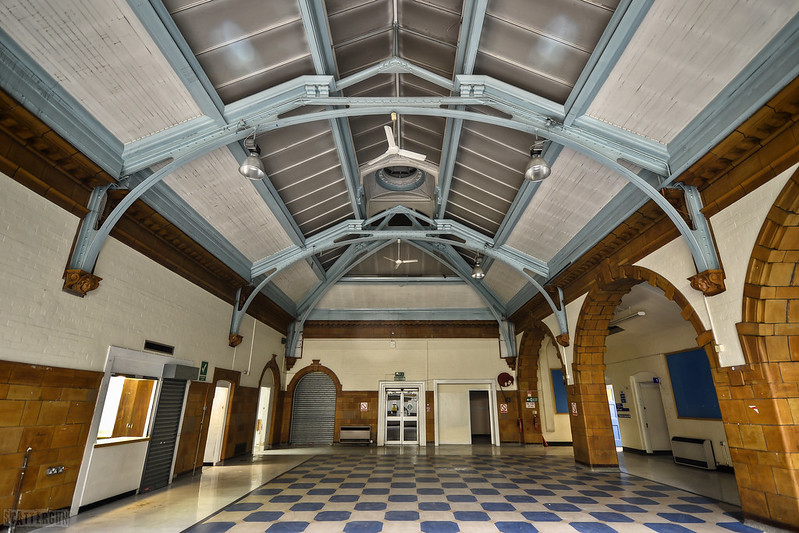 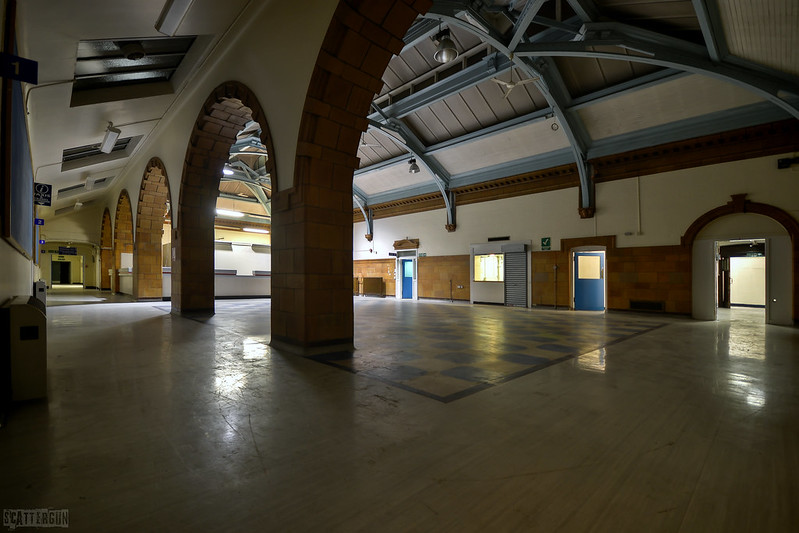 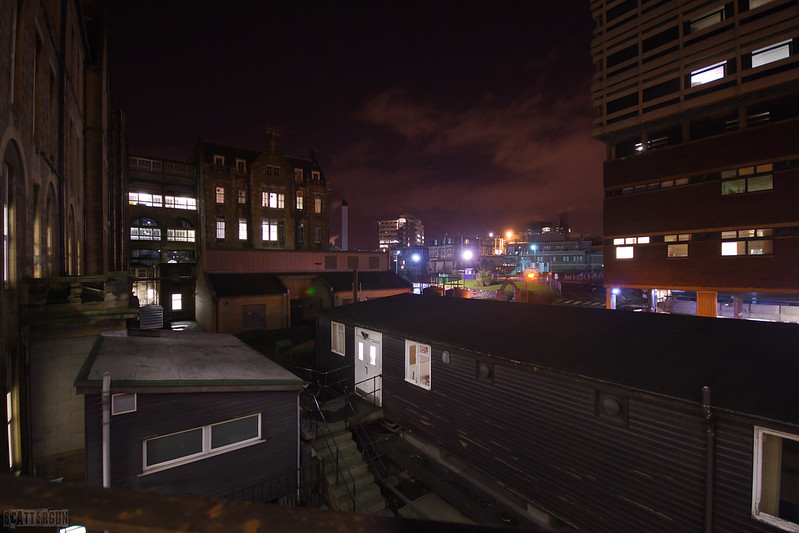 The Memorial Chapel from the roof 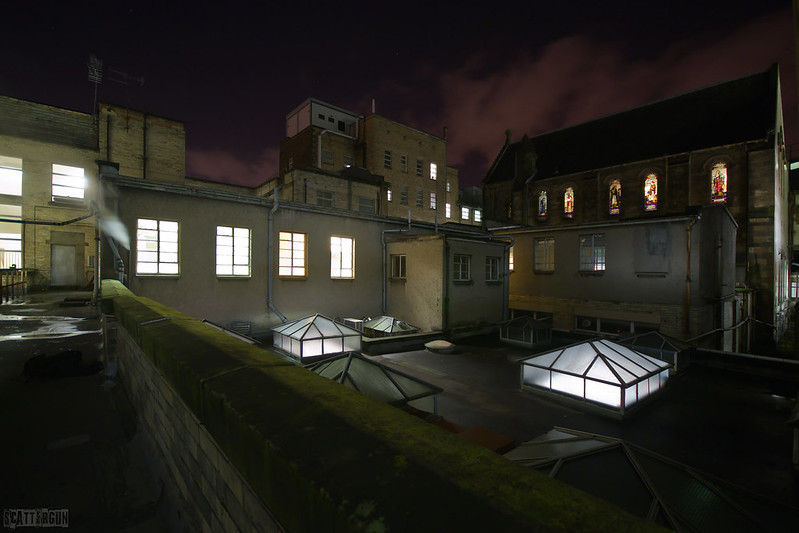 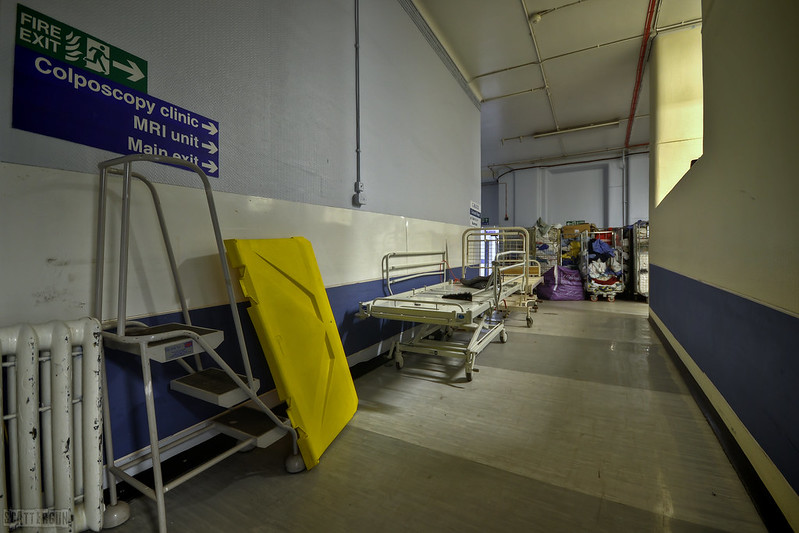 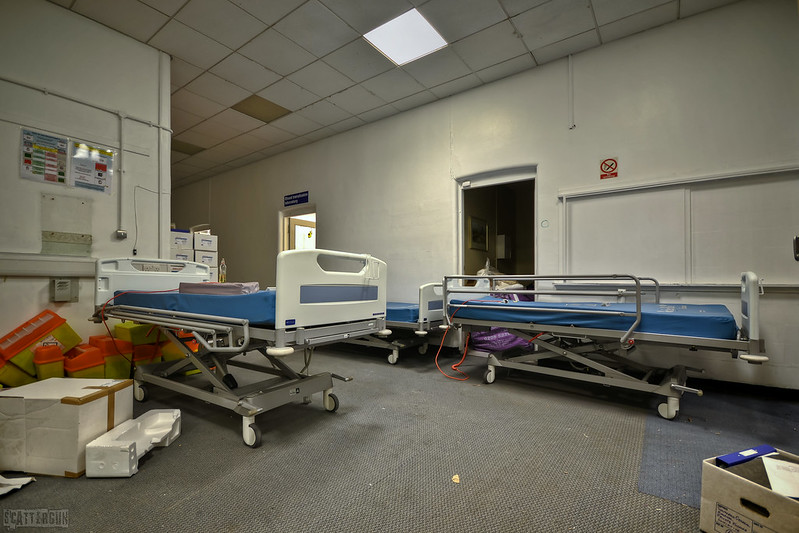 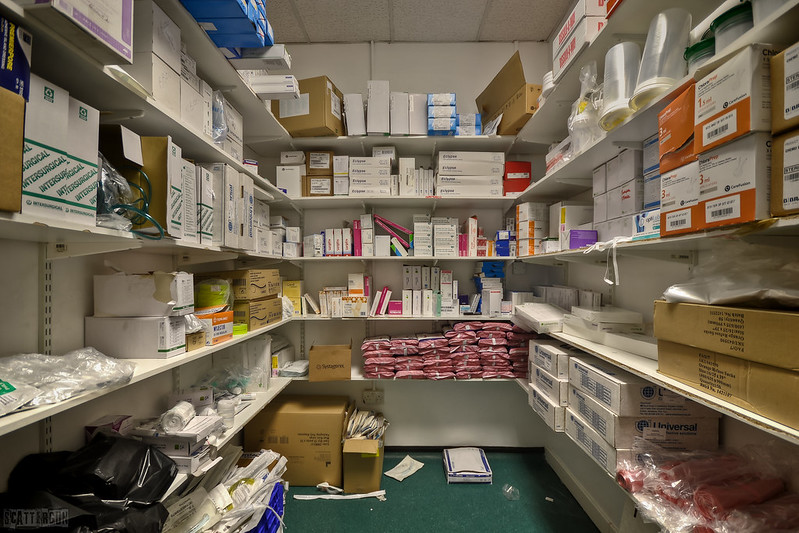 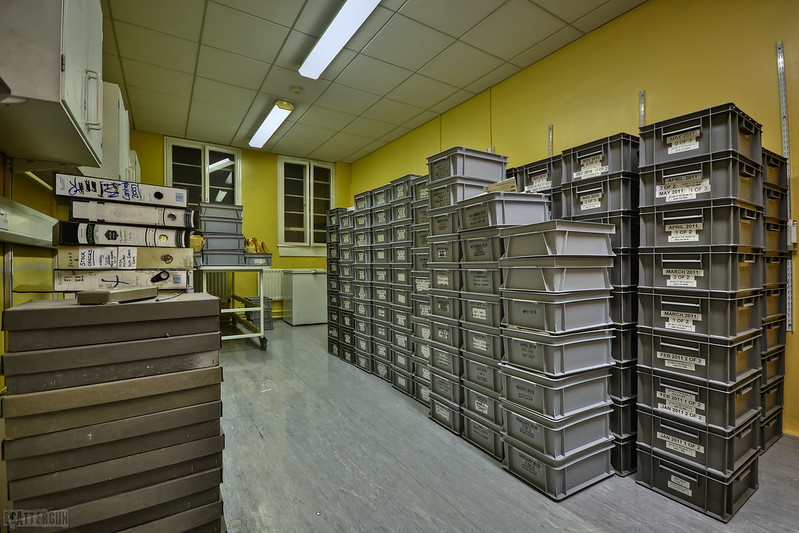 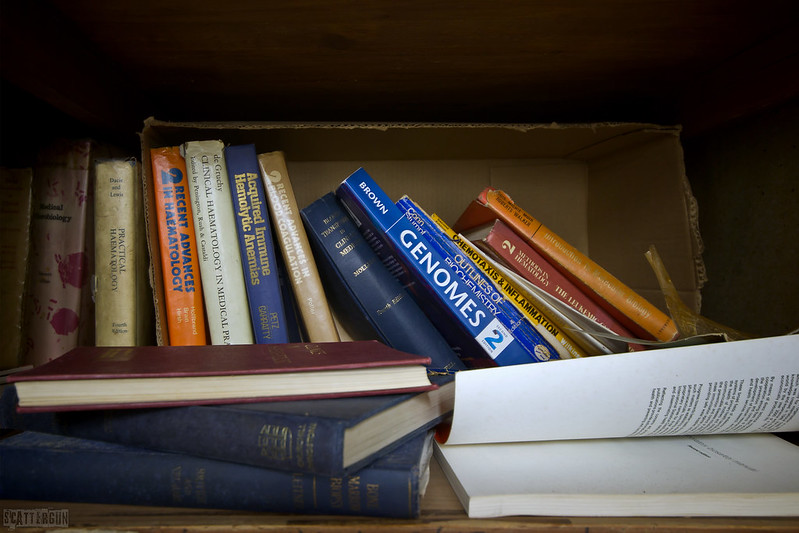 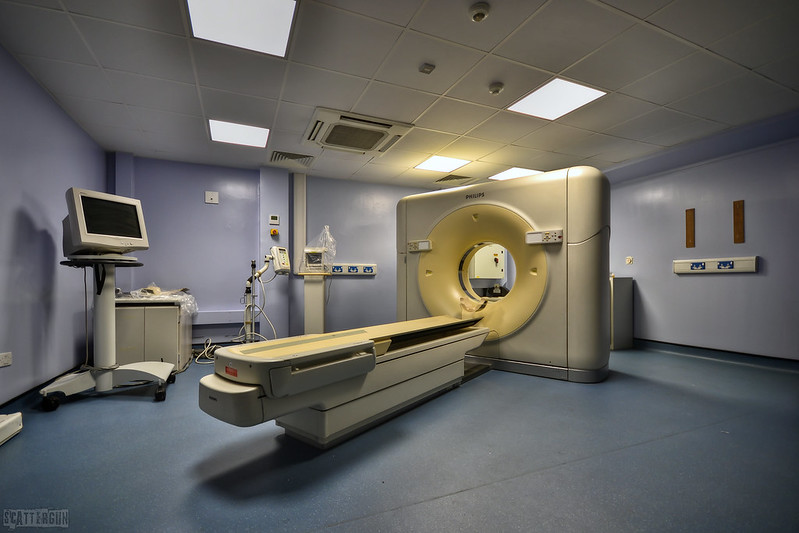 The Western closed in December 2015. In accordance with a commitment given by the hospital to the University in 1878 that the site would be offered back to the University if it was no longer required for healthcare, the University exercised its right to acquire the site and plans to redevelop it were approved in February 2017. As of June 2018 only the Cat B listed buildings lining Church Street were still standing. You can find a much more detailed history here;
https://universitystory.gla.ac.uk/building/?id=122
All Google imagery is copyright of its respected owners. (Due to not being bothered to edit external pictures of my own and not being alive in the 1890's). 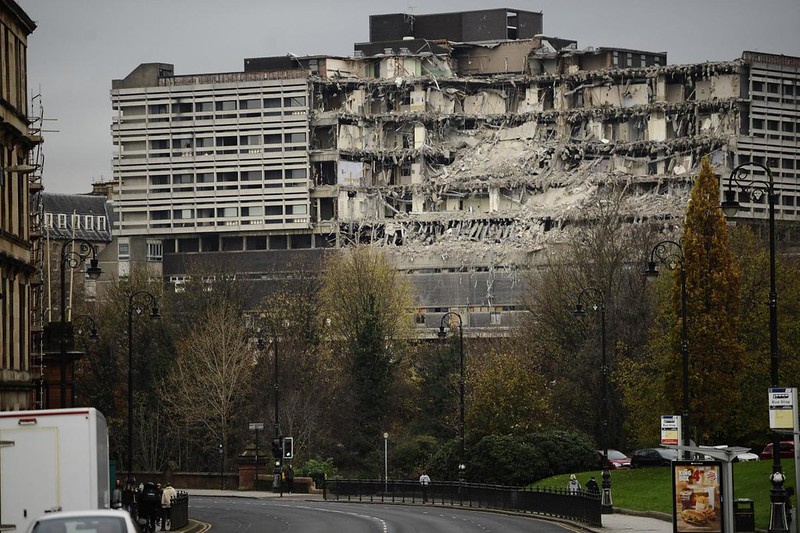 Great report SG, interesting to see so much left in there with the power on!
U

Should've done a lot more research on the famously derelict Church St when I was up in Glasgow, as I was only interested in the pool. Nice report though man glad you saw it

UrbandonedTeam said:
Should've done a lot more research on the famously derelict Church St when I was up in Glasgow, as I was only interested in the pool. Nice report though man glad you saw it
Click to expand...

What did you think of the pool chief? It's a bit of a time capsule.

It's a weird mix of architectural styles, but then Glasgow is like that. I quite like the Keppie building (Phase 1) which is saying something as most of their 1960's and 70's work is sh*te. Well done for persistence despite having to bolt from security.

Aye was a fun time had by all