I've had my eyes on this spot for a while but forgot about it until a report cropped up recently. As it's pretty close to me, I decided to check it out before it got vandalised as it seemed to be naturally decaying. 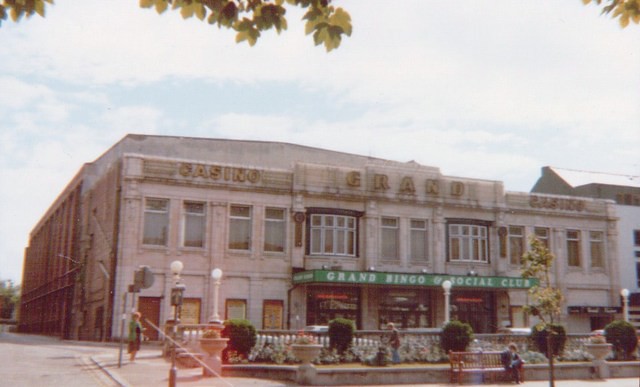 Located in the Sefton district of Southport at the corner of Lord Street and Court Street. Originally built in 1923 as a garage and car showroom, it was converted into a luxury cinema in 1938 by architect George E. Tonge. The Grand Cinema opened on 14th November 1938 with Arthur Tracy in "Follow Your Star". The cinema was designed for and operated by an independent operator throughout its cinematic life.


Seating was provided in a stadium plan with a sloping floor at the front (known as the Pit stalls and stepped floor at the rear which was known as the Royal stalls and Grand stalls. An unusual feature was the provision of a balconette which was attached to each sidewall. Seating was provised in pairs all along towards the proscenium. There were decorative grilles each side of the proscenium opening which contained the organ pipes of the Compton 3Manual organ which had an illuminated console on a lift, in the centre of the orchestra pit. The organ was opened by Herbert A. Dowson. In the ceiling was a large shallow dowm which had a central Art Deco style light fixture. There was a cafe provided for patrons. 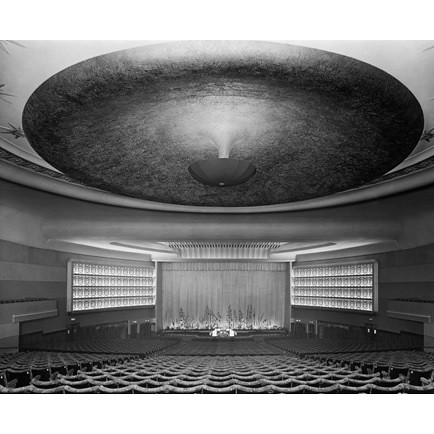 The Grand Cinema closed on 2nd July 1966 with Sean Connery in "Thunderball" and Peter Cushing in "Hound of the Baskervilles". It was converted into an independent bingo club, and the Compton organ was played to bingo players at the interval during the first few years. The bingo hall closed around 1999.

The Grand Cinema last operated as the Stanley Grand Casino, and from 2007 became the Mint Casino, but this was closed by May 2016 and the building is boarded up in early-2017. It is a Grade II listed building. 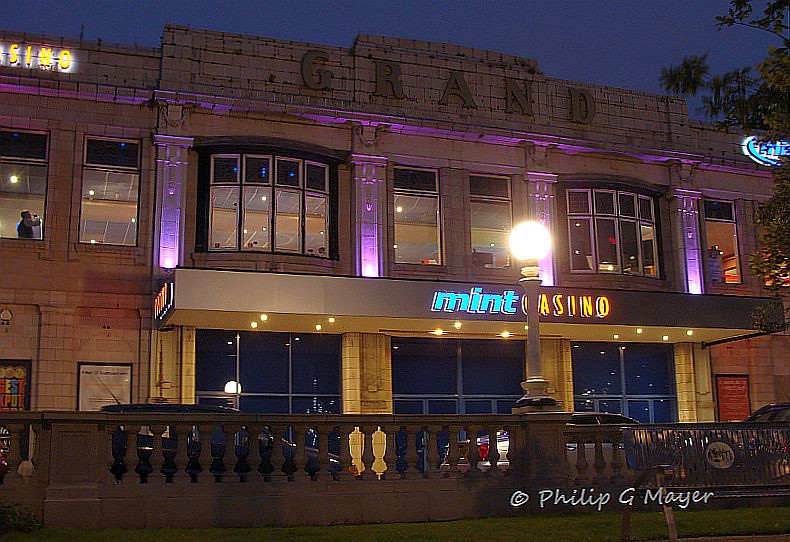 As soon as we entered the building we were in probably the largest room we have seen in an abandoned building, the main cinema/bingo hall. We could see the numerous times the room had been converted for it's use however the main cinema stage/screen still remained as well as the amazing ceiling.

Although I'm pretty happy with my lighting equipment, trying to light it up was a huge challenge. I've never done anything on this scale before so me and my friend spent ages waiting for the camera to take a focused photo as we sprayed our light to as many corners as possible. This is the best we got - if you want to see much better pictures of the place, I highly recommend looking at albino-jay's report, as he covered it really well.

Old pictures of the site in use as a bingo hall. 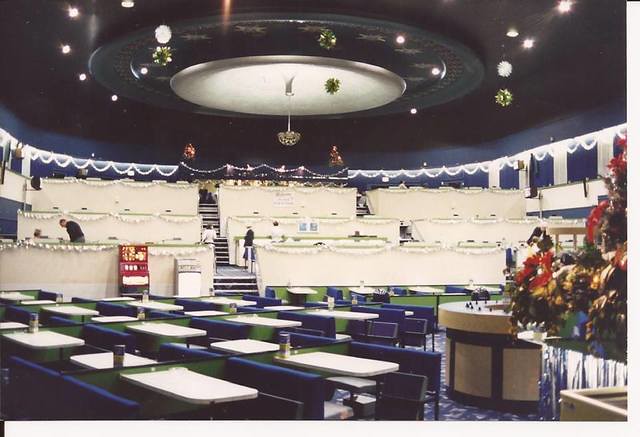 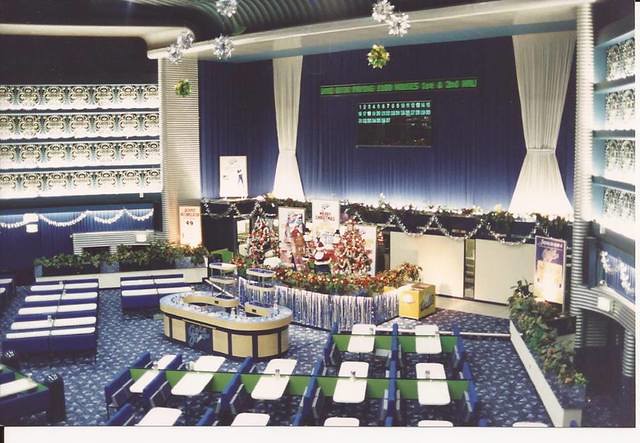 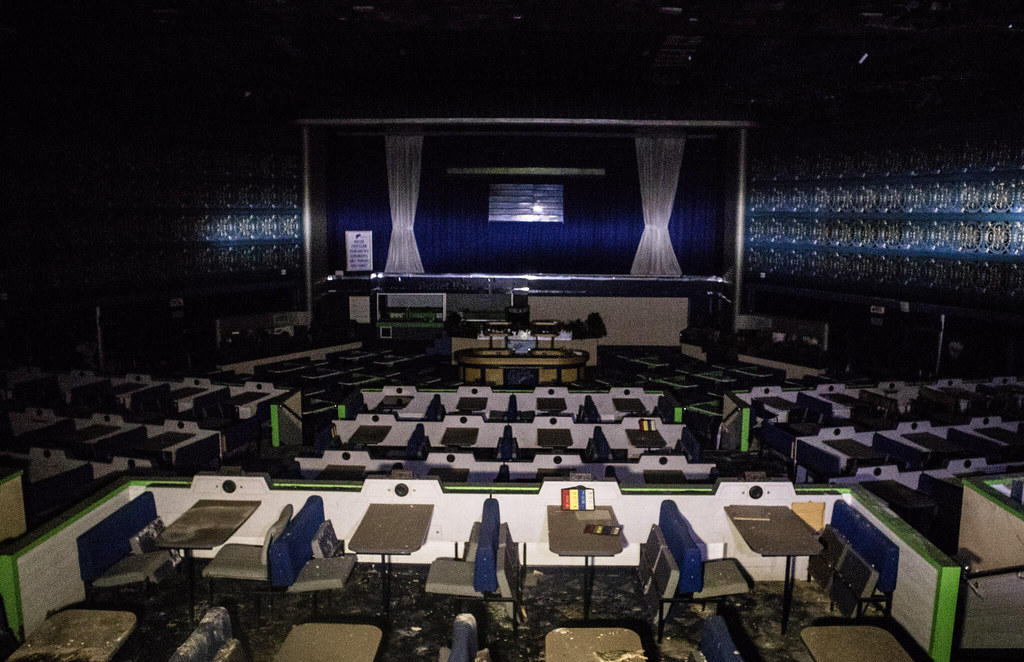 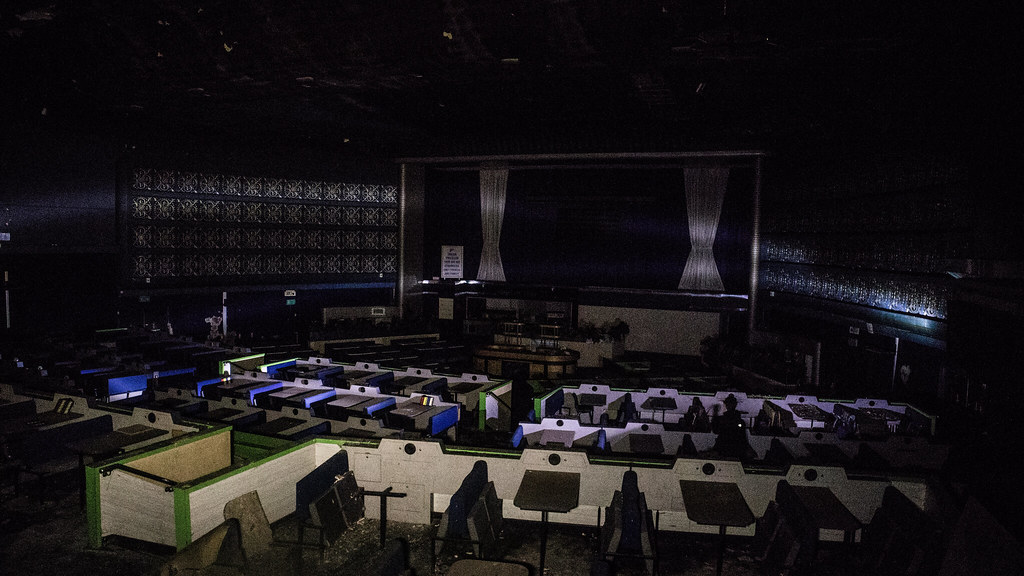 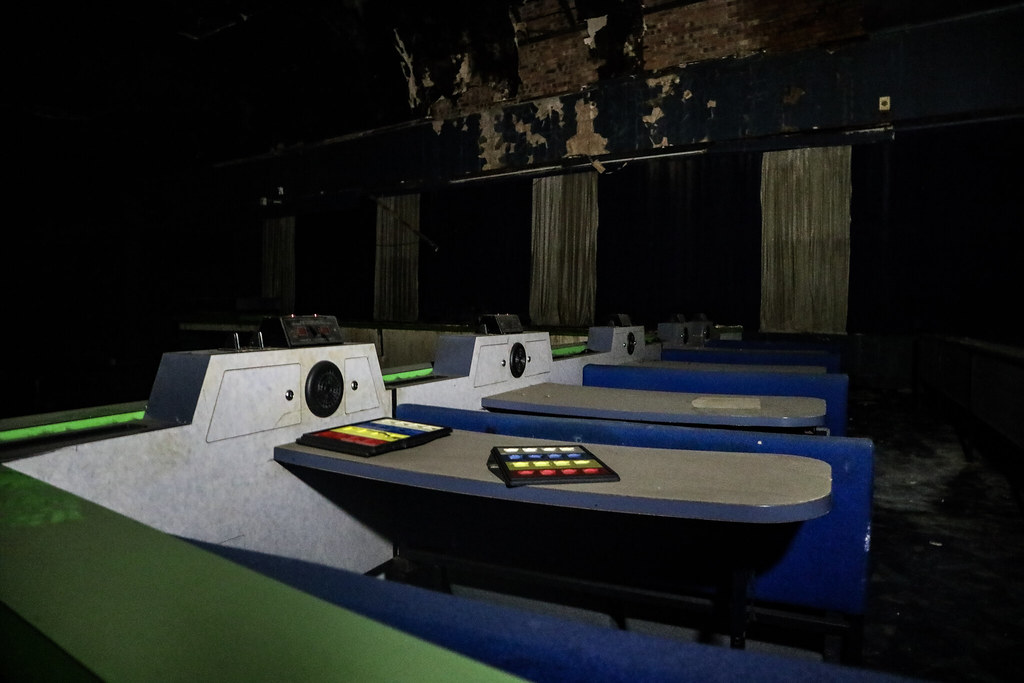 All the little machines on every row was really nice as well as the many bingo cards left behind, some with the numbers even circled. We even found this retro phone at the top side of the hall. 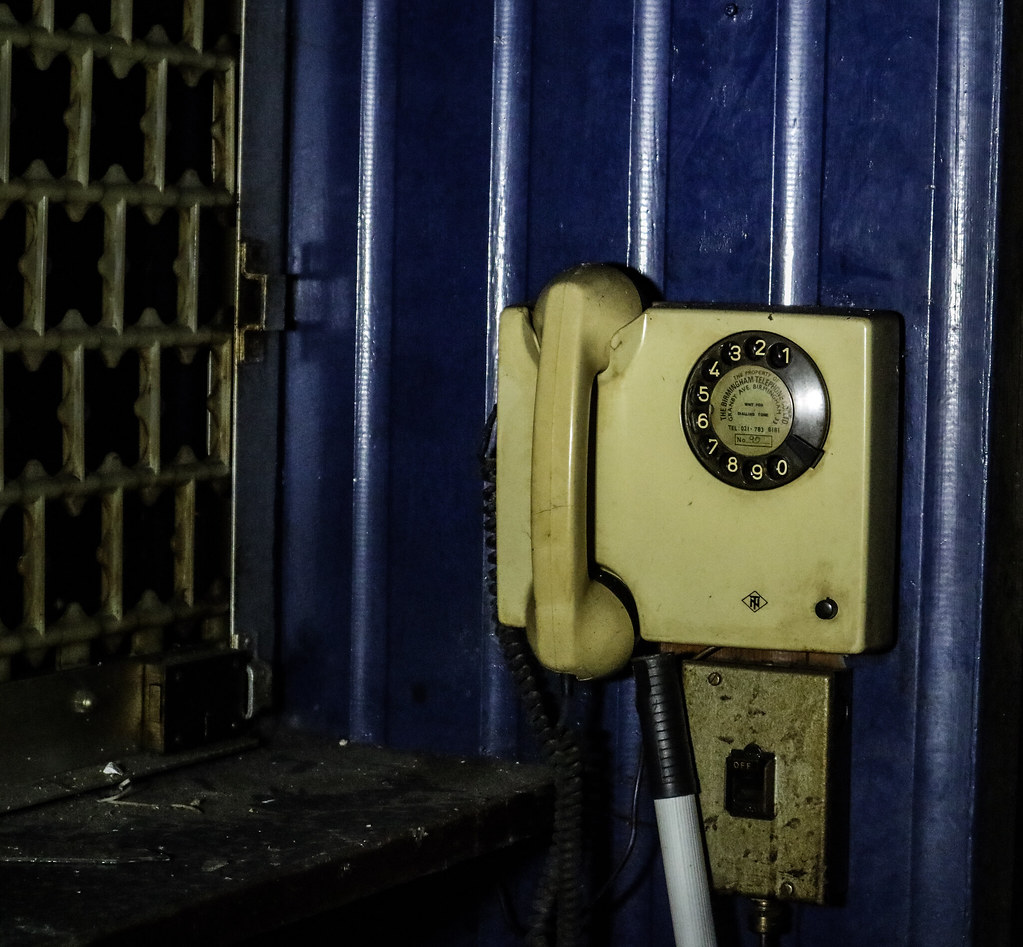 Running along the side of the main hall were identical corridors and we almost walked through a hole in one of them! I advise constantly checking the floor if you visit as some holes are covered up by rugs and carpets so it is hard to tell, especially in the low light. 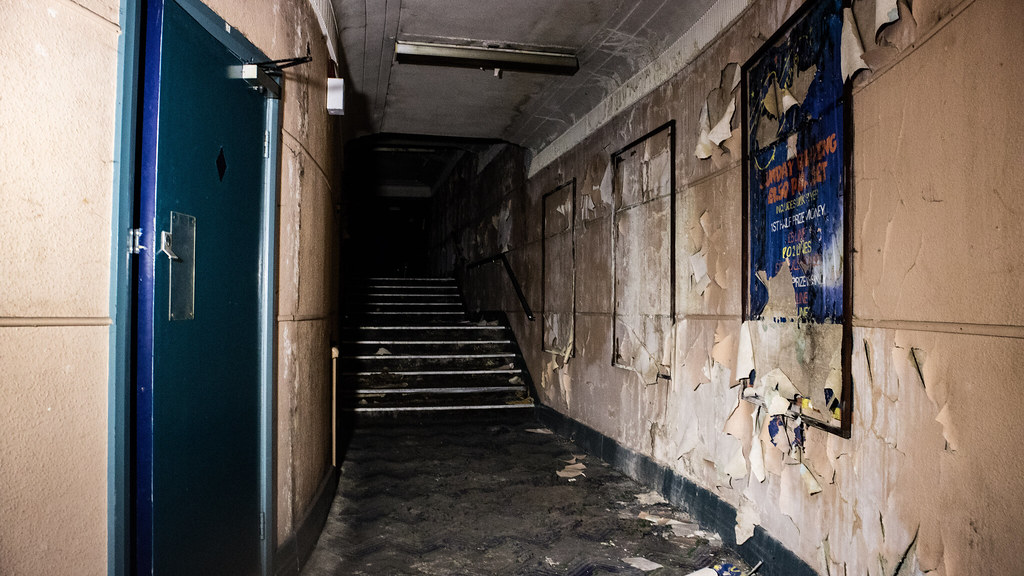 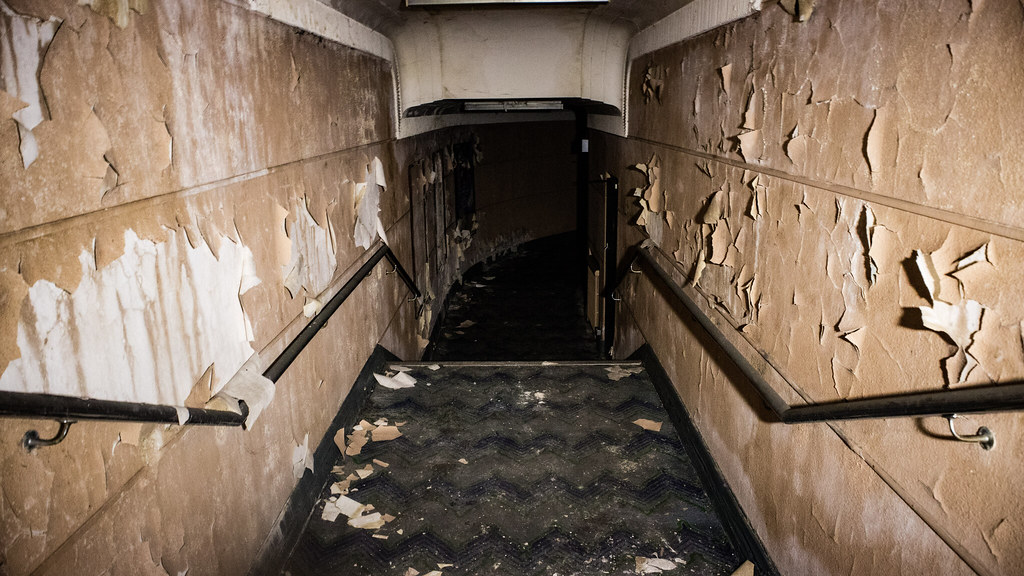 The entrance hall really shows off the building's art-deco design, with the pillars and this staircase. 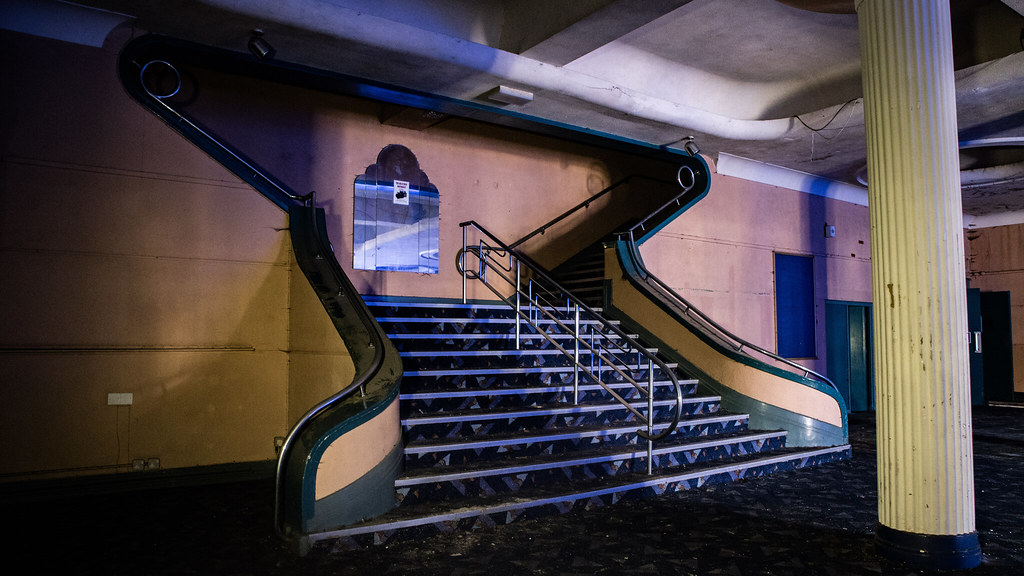 Above this room lies another large room where the casino would go ahead. The safe is still left where people could gain money to spend from, along with the bar and some lovely stained glass windows. It seemed we entered this room at the perfect time as well, with the sun beginning to set, the light being let in through these windows was amazing. 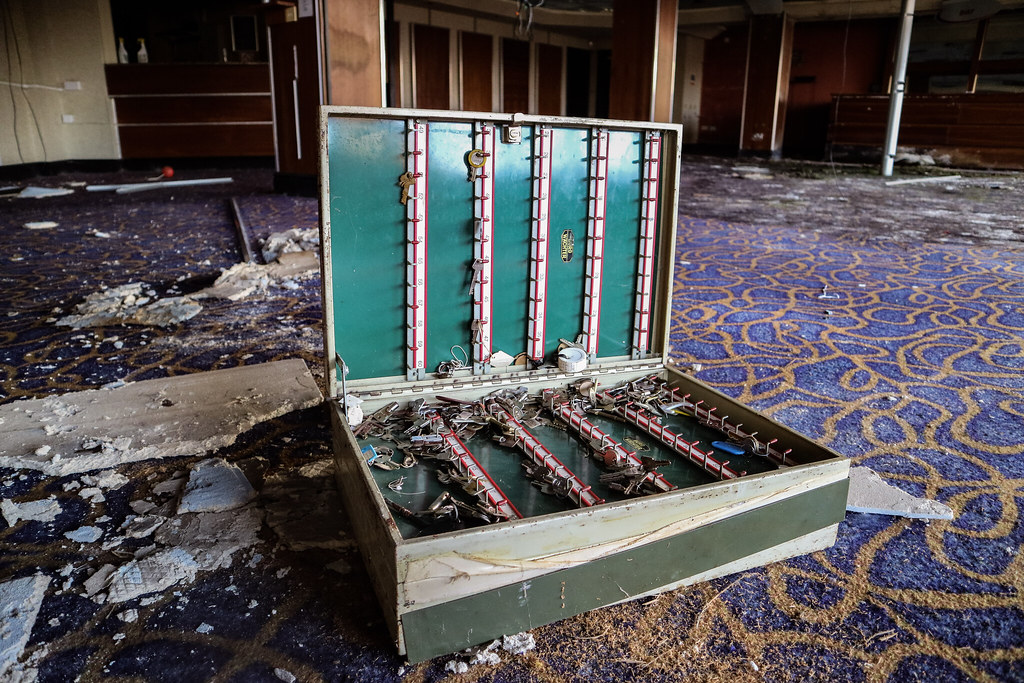 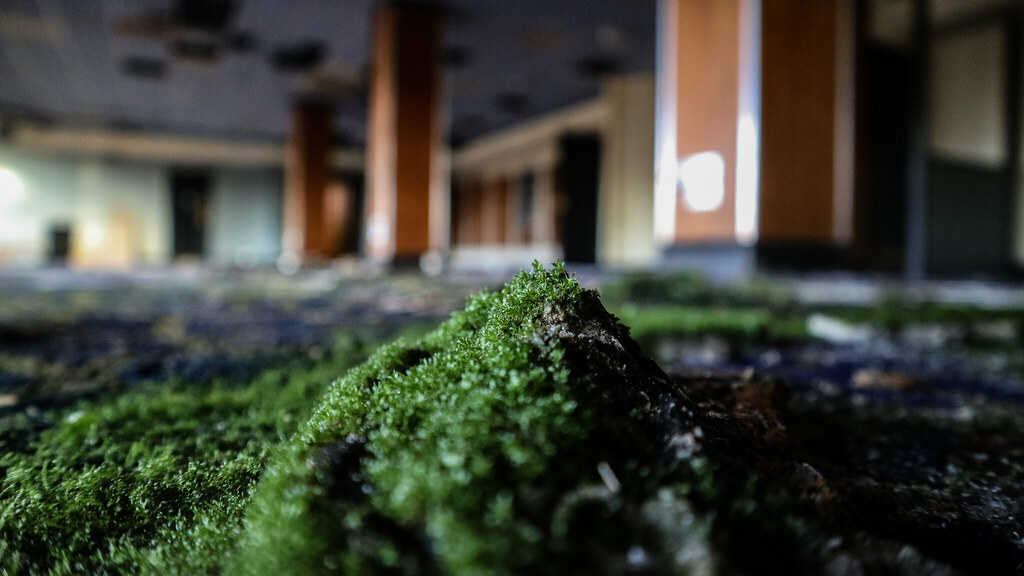 Here you can find my documentary of this location. I cover the history, explore and future for the building:

That's very nice. This place just needs some TLC. I like the art-deco staircase.

You done well to light that it looks a big space! Excellent shots and write up! Thanks for sharing

Very nice, and a fascinating writeup. Thanks.
D

Another example of 'a rush to list' without any real thought of an end user/purpose in sight. First came across this place in 1960 because of the original Compton connection - sadly the place needs far more than just TLC, if the structural decline is to be halted and a real continuing purpose is to be found for this place. Sadly I suspect that it will just become another of the many listed, boarded up eye sores we find dotted about our larger cities and towns. The most interesting item in the building is the original Birmingham Telephone Company, wall mounted apparatus - still containing the Company's centre dial card label and obviously not taken into GPO ownership in 1912 when the Post Office took over most of the private town and city telephone companies in England that were then owned by the National Telephone Company - NTC. By the end of the 30's most of the original small private companies were under the wing of the GPO (do not know when Birmingham was fully taken into the GPO fold). All that is except the phone company in Hull, which to this day is a private concern owned and operated by the City

Here's hoping something is done with this place.
And yes, that old phone is great, and I'd imagine very rare.

That's a cracker there mate.
V

Could put a Weatherspoon there or better still a Tesco Metro with over priced flats on top, Thats what they do with most buildings in London with the developers making promises not to alter the outside. Or they could repair and return it back to its former glory. We know that will never happen sadly and will be knocked down or burnt down to get through the Grade II listed building loophole, if its structurally unsafe it will be pulled down.

Great report! Superb pics, really like the phone and the moss on carpet last shot!
U