Hallen and Berwick Wood PSDs (Petroleum Storage Depots) are part a huge fuel storage complex extending into the hills around the village of Hallen (photos alone give no idea of the size) and is a strange mixture of derelict, dormant and very much still in use with big fences, workmen and CCTV cameras.

Established c.1940, the Hallen Air Ministry Fuel Depot was part of a major aviation fuel supply system which had pipelines running across the UK. The depot also had its own HAA site (ST 567 809), now a paintball course and inaccessible without permission.

Usage of the facility continued Post-War and it was considered important and secretive enough not to be marked on any maps until the 1990s.

The majority of the depot is still in use as part of the Government Pipeline and Storage System, a 2,500km network of pipelines run by the Oil and Pipelines Agency for the MOD, supplying RAF Stations and AWE Aldermaston as well as civil airports such as Heathrow and Gatwick.

Work is ongoing to overhaul the depot and there are plans to extend the Severnside Siren system to cover the depot and surrounding area.

Only a small part of the site is derelict outside the perimeter fence and my visit was a hurried one due to the amount of activity happening around about. Overview. The M5 cuts through the centre of the aerial image. 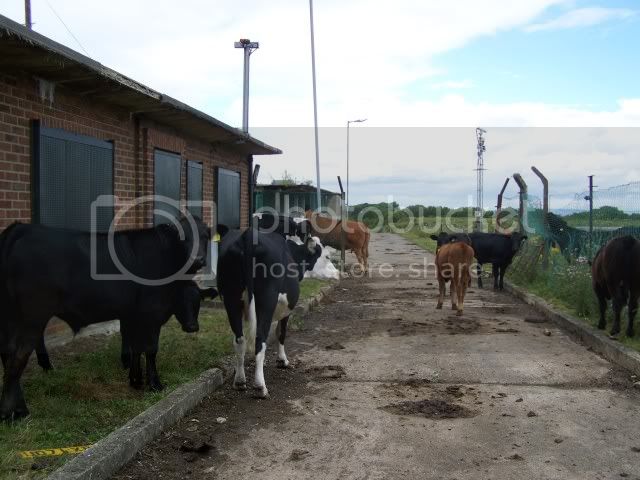 Entrance to the easternmost (active) tank farm, with CCTV and guard cows (taken from the fence)

Having found the HAA off limits and the southern tank farm still in use, I took a drive to the other side of the hill and the main site. 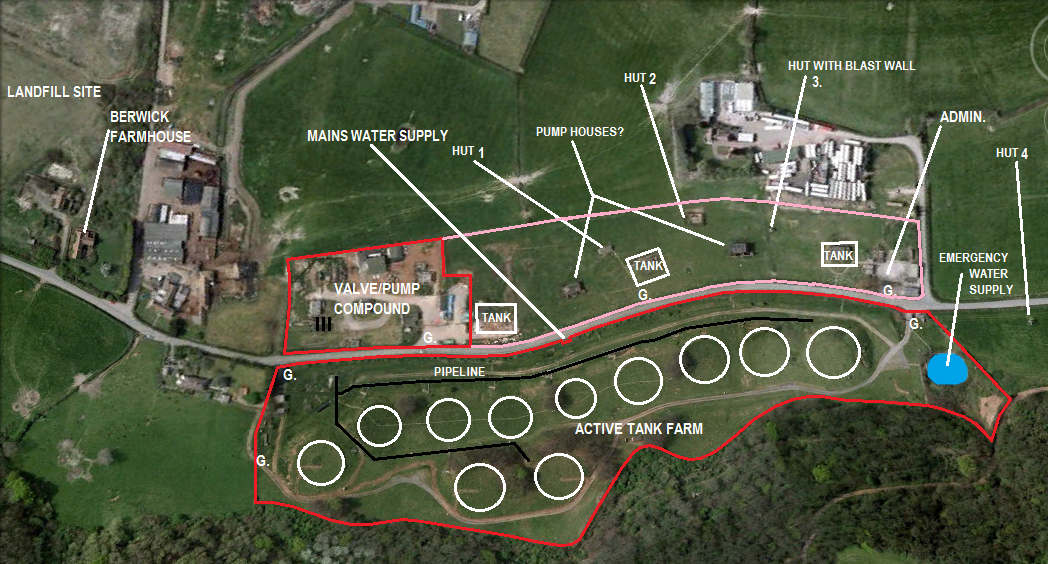 Plan of the northwestern (Berwick Wood) site: the red-bordered area is still in use and very secure for obvious reasons. 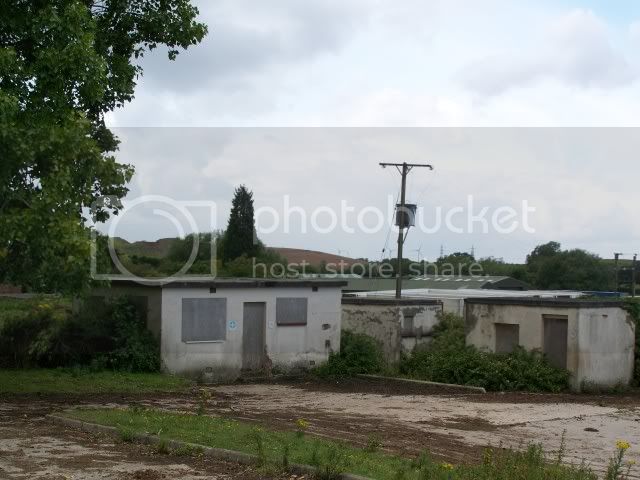 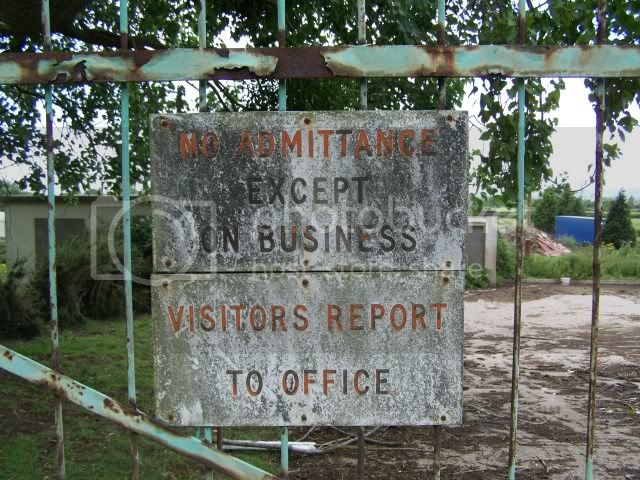 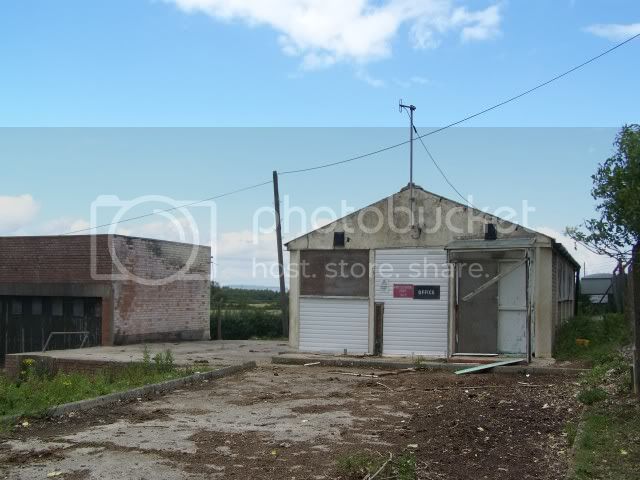 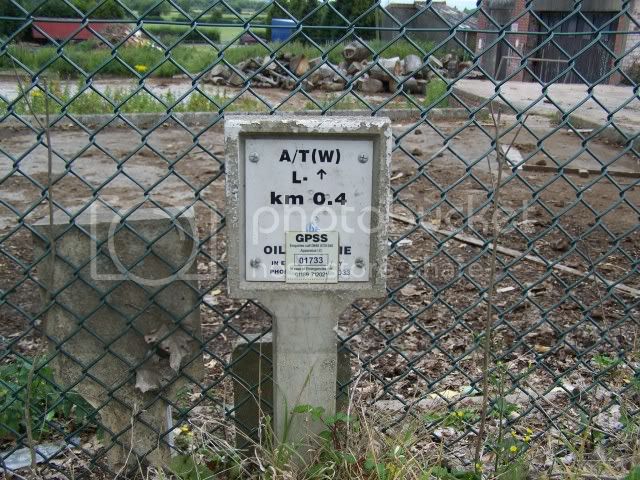 GPSS marker (no pole with a yellow hat, unusually) 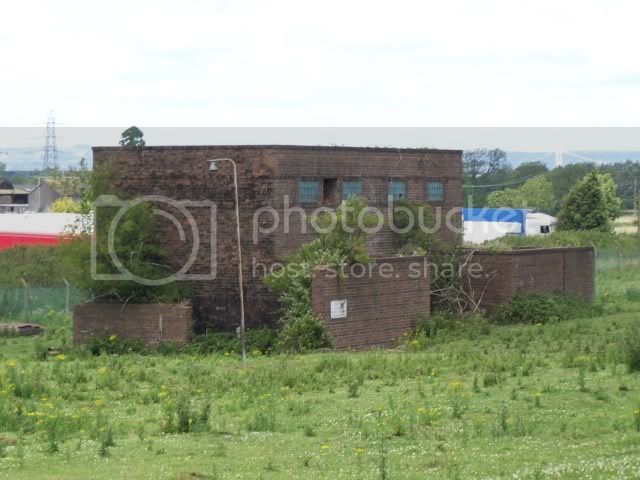 There were two buildings like this. I think these were pump houses: they consist of two identical rooms side by side with separate entrances each with its own (considerable) blast wall, one with what appears to be a small refuge at the end. 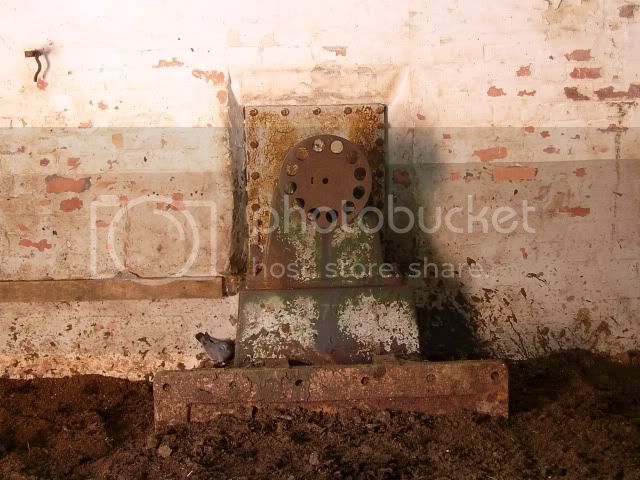 Inside there are louvred vents and the remains of ducting as well as some sort of machinery mount. 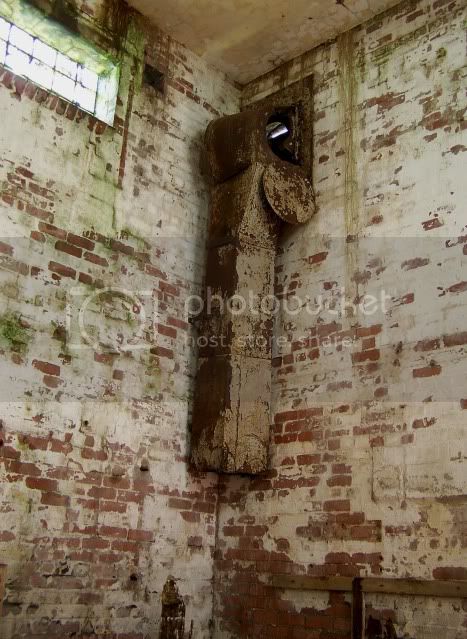 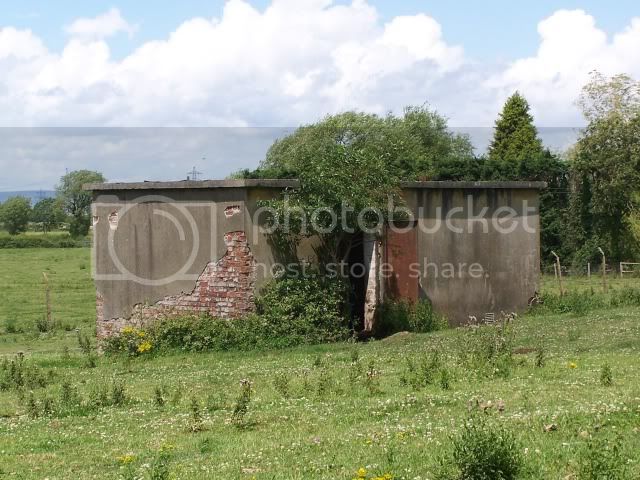 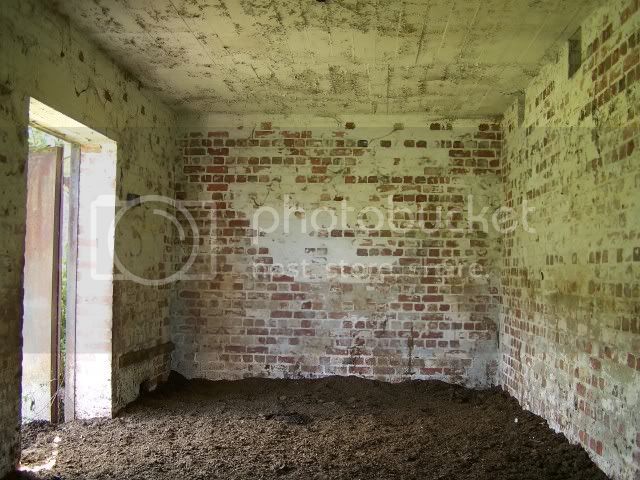 Inside hut 1: not much clue to purpose here. 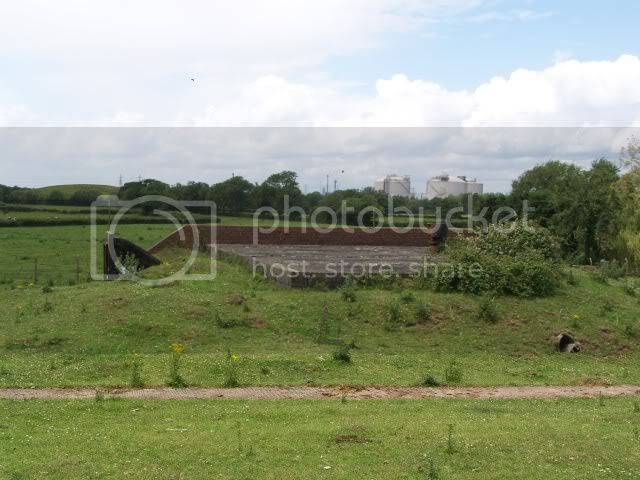 Fuel bunker. The white tanks in the background are the National Grid's Avonmouth LNG storage facility. 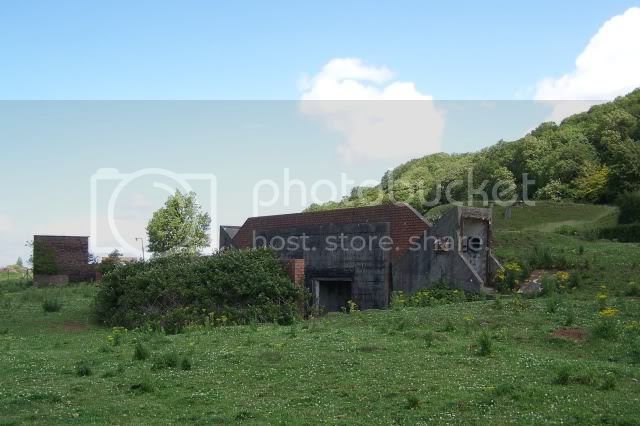 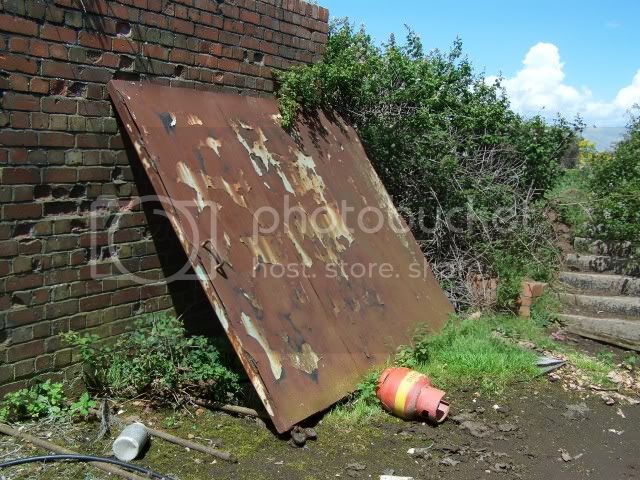 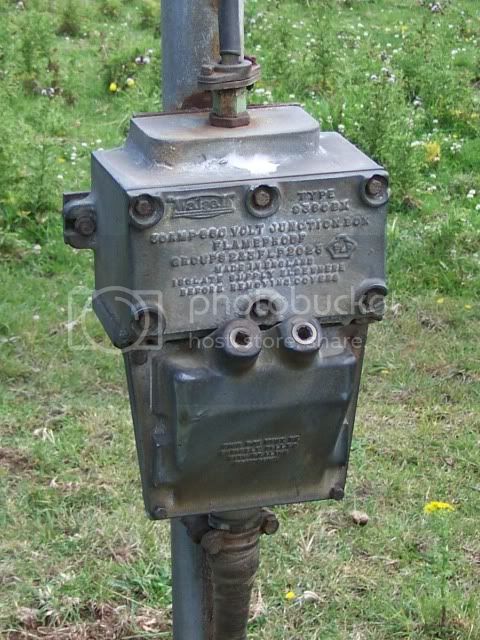 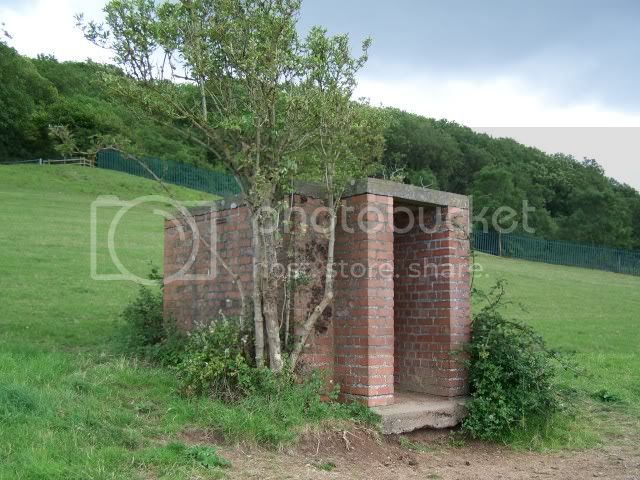 Hut 4 on the hill above the complex. No evidence of electrical connections, machinery mountings or windows, possibly some sort of lookout?

Part of the live site (valves and pump compound). This is very much still active: contractors were busy cleaning the tanks and adjusting the valves and I watched, somewhat amused, for about 15 mins as a large tanker tried unsuccessfully to negotiate the ramp into the depot.

I parked the car opposite this derelict farm. Called Berwick Farm on the map, the land suffers from landfill gas ingress and has been abandoned for some time. 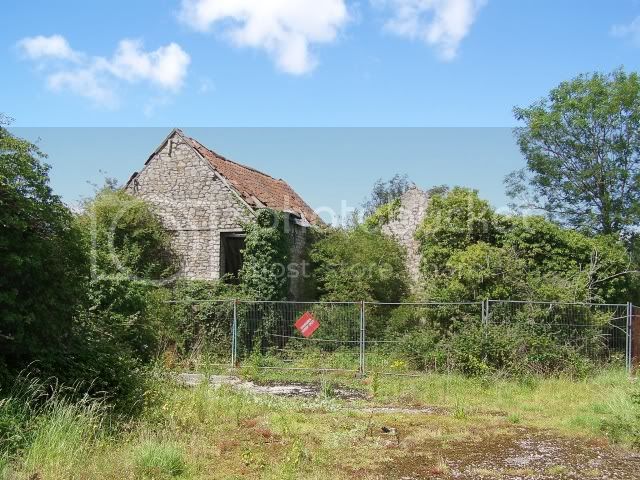 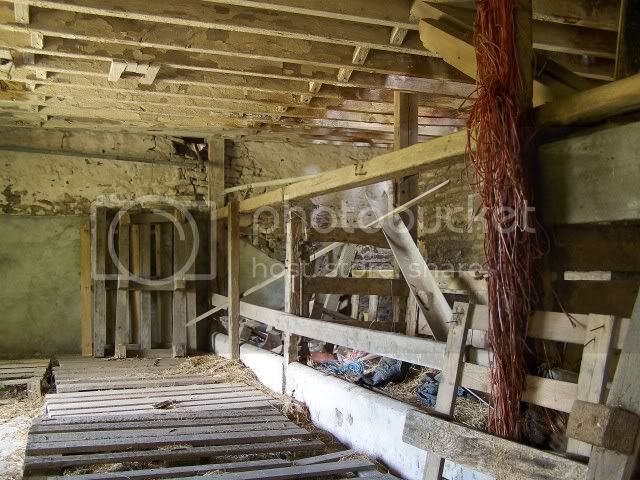 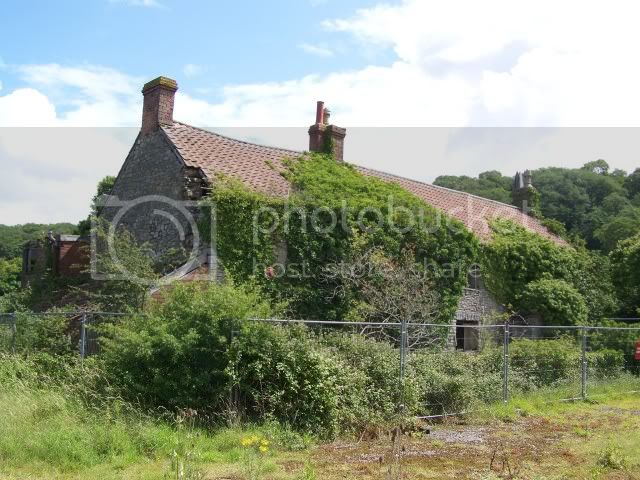 The farmhouse, sadly inaccessible at the time of my visit. 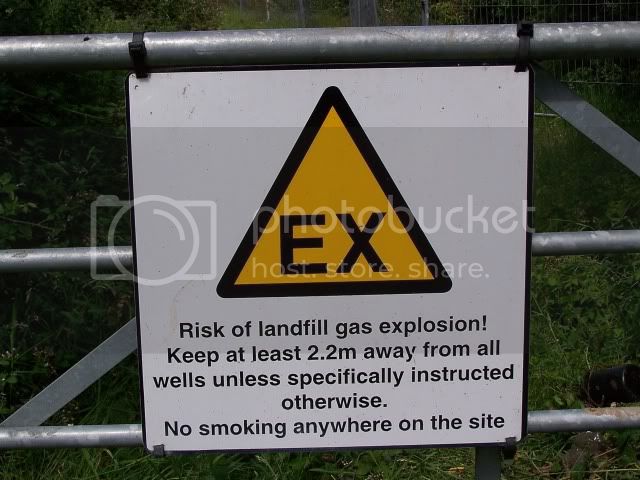 Thanks for reading,
A.

Great report, shame about the cows and CCTV! Loved the photos, when was that part closed?

No idea, I'm afraid. Unfortunately, history is hard to find and maps are no grear help. I can't source much material earlier than 1990, before which it seems this place officially 'didn't exist'!
P

I visited the HAA site not so long ago and it was all accessable then. Shame if its been fenced off. From what direction did you approach it?

That's a cracking find, Arch. The little look-out building reminds me of a WW2 Airfield Sentry Post, which would tally if built to the same specs, but with a larger room to the rear. Interesting stuff.
Cheers.

penance said:
I visited the HAA site not so long ago and it was all accessable then. Shame if its been fenced off. From what direction did you approach it?
Click to expand...

I used the access road from Hollywood Lane. The place has been fenced off and is under new ownership with lots of barbed wire and (apparently) on-site security. I'm currently working on getting access legitimately. 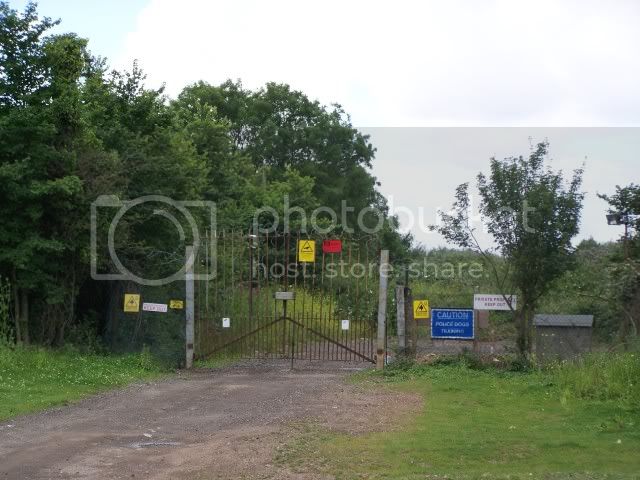 Thats a real shame, although the remaining emplacements have had roofs added and dont really look like emplacements. The CP was fairly good condition.

Grandfather served there for a while before his travels to North Africa.

Interesting report that, nice pics as well, enjoyed it, Thanks
S

the active tank farm isn't as active as you think, I worked there a few years ago. I'll PM you the details

Nice report that a place I have been past on the M5 but never knew was there.