1. The History
Lying 379 above sea level, Harboro' Rocks (or Harborough Rocks) is a dolomitic limestone hill near the village of Brassington in the Derbyshire Peak District. In the nearby cave is a natural cavern in the rocks where archaeologists have found evidence of human occupants since the Ice Age. Satirist author Daniel Defoe makes reference in his book “Tour thro' the whole Island of Great Britain” in 1726 to a poor family of seven living in the cave. The father was a lead miner and was "lean as a skeleton, pale as a dead corps" but that they "seemed to live very pleasantly".

Map of the area: 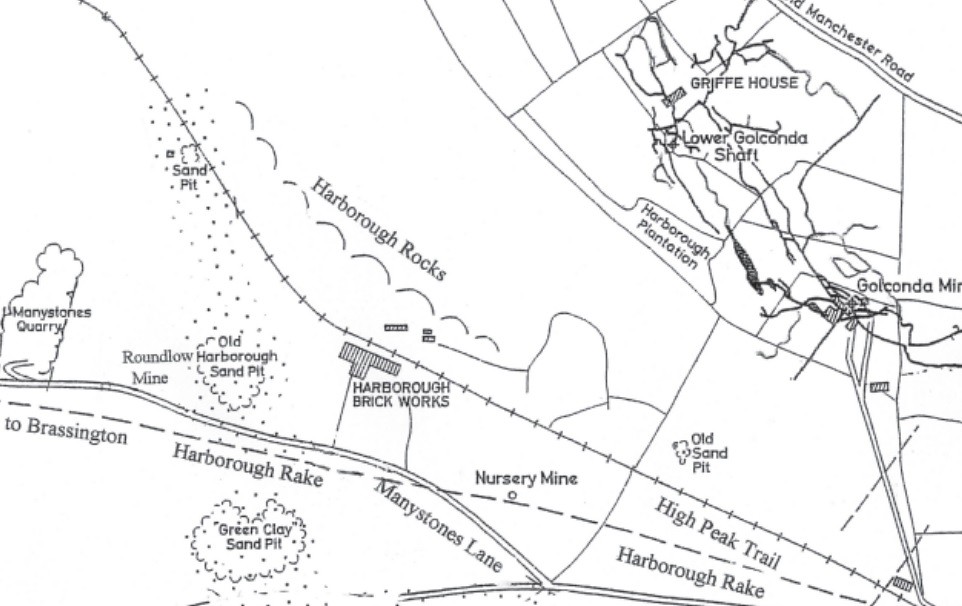 The area is dotted with mine shafts of lead mining. The biggest and best known mine is Golconda lead mine, on the north-east side of the hill. Part of the Gell family's Griffe Grange mining liberty, it ran from the summit of Harboro' Rocks to Via Gellia. The mine dates back to the 1700s and the mine shaft is over 100 metres (330 ft) deep. Golconda is a name used for wealthy mines, after the famous Indian Golconda diamond mine. The mine's tunnels enter natural caverns such as the Great Shack. After closing in 1913, the mine was reopened in 1915 to mine baryte until 1953.

To the south are the remains of some old works at the foot of Harborough Rocks. There’s scant history on it, but it is likely it was an old crushing plant for limestone quarried from nearby.

2. The Explore
Bit of a curiosity this place. Not been reported on before as you wouldn’t go out of your way to see here. However, it does have a bit of charm about it and there’s enough to keep you busy for three-quarters-of-an-hour or so. We were en-route from somewhere else so thought it was rude not to pop in. There’s not a lot left in true and even lesser on the place’s history. The main site with the concrete pillars is very photogenic though and looks like some sort of Inca temple.

First thing you pass is this bricked up old farm: 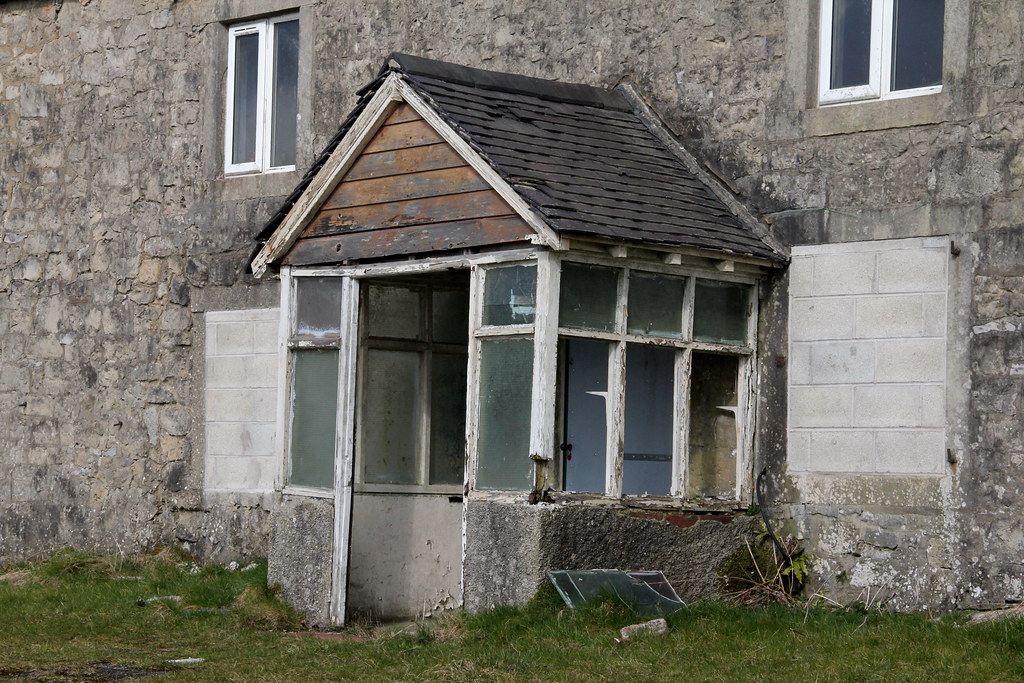 Initially thought this was a mine adit. Given it is very shall, maybe a small icehouse for the farm next door? 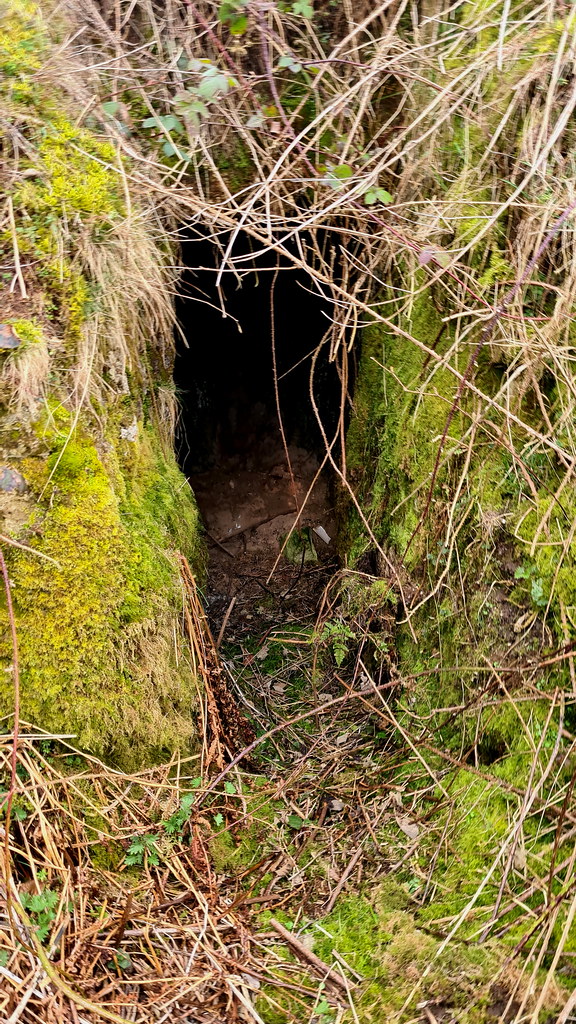 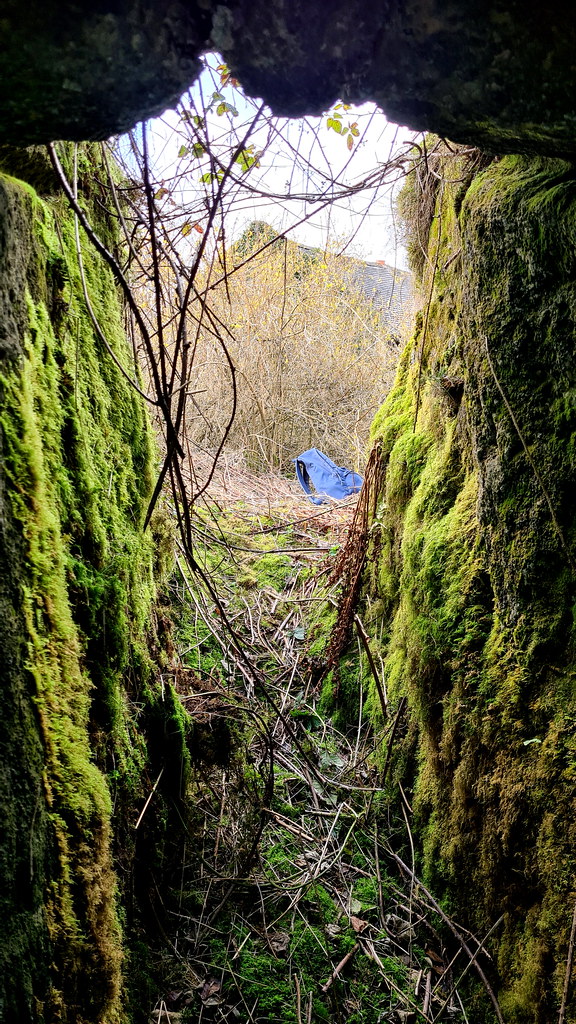 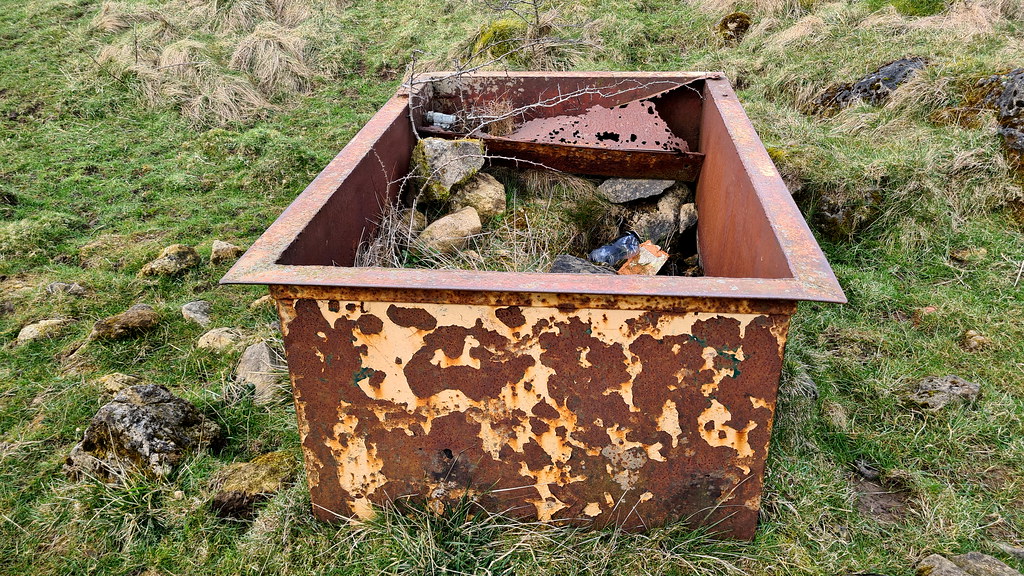 Not too sure what this is: 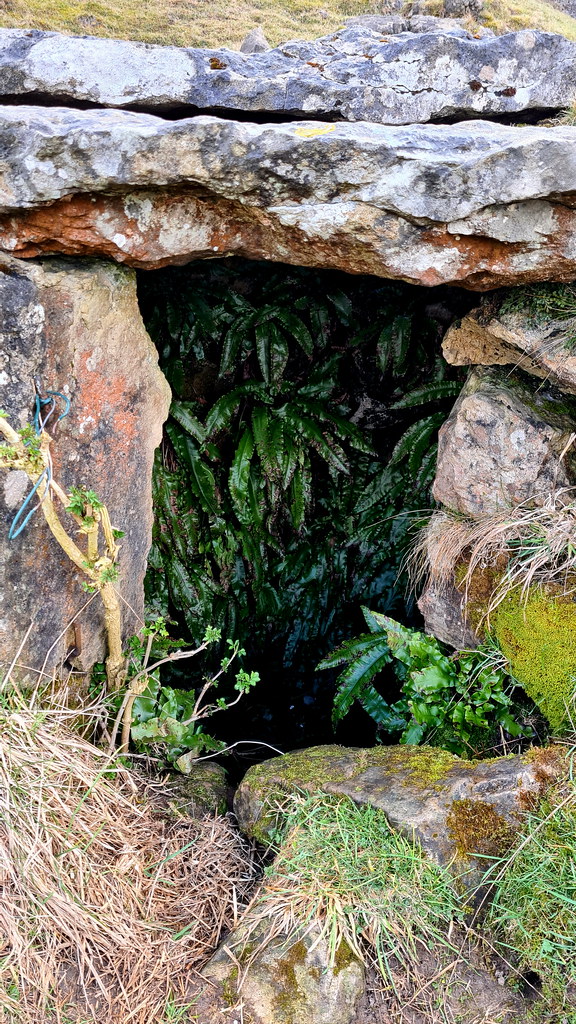 Next to the cave entrance is this little brick building: 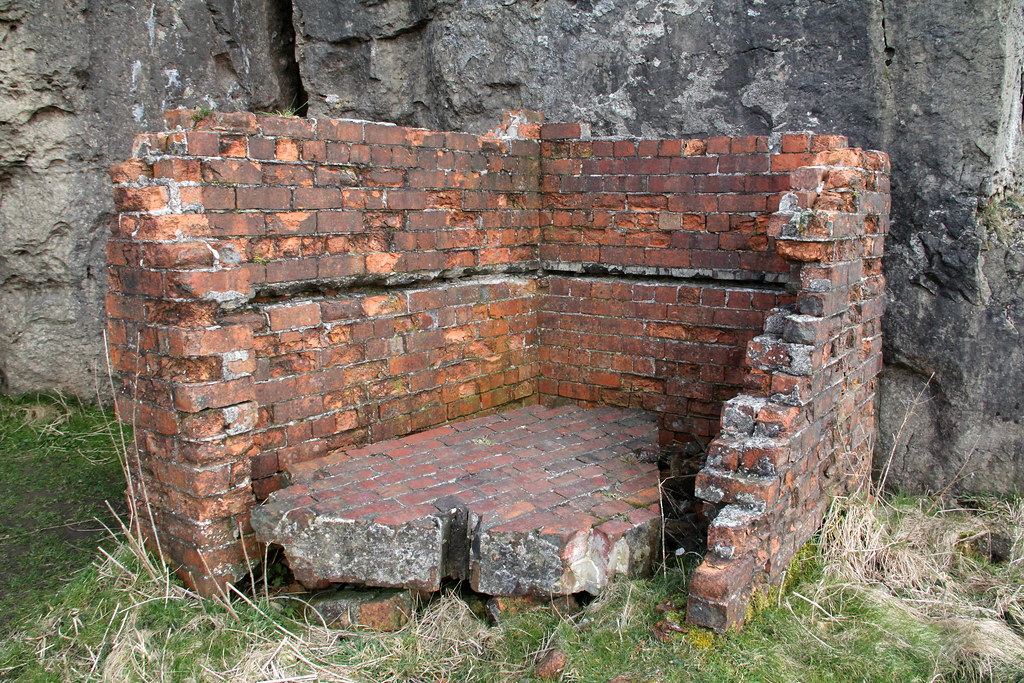 And a quick peek into the cave mentioned above in the history: 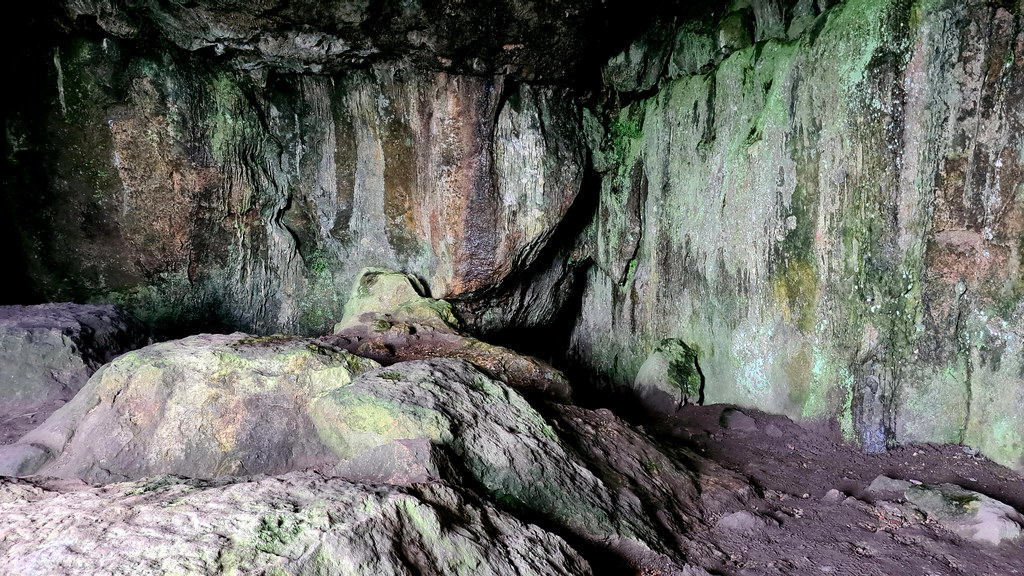 This looks like the base of some circular storage facility: 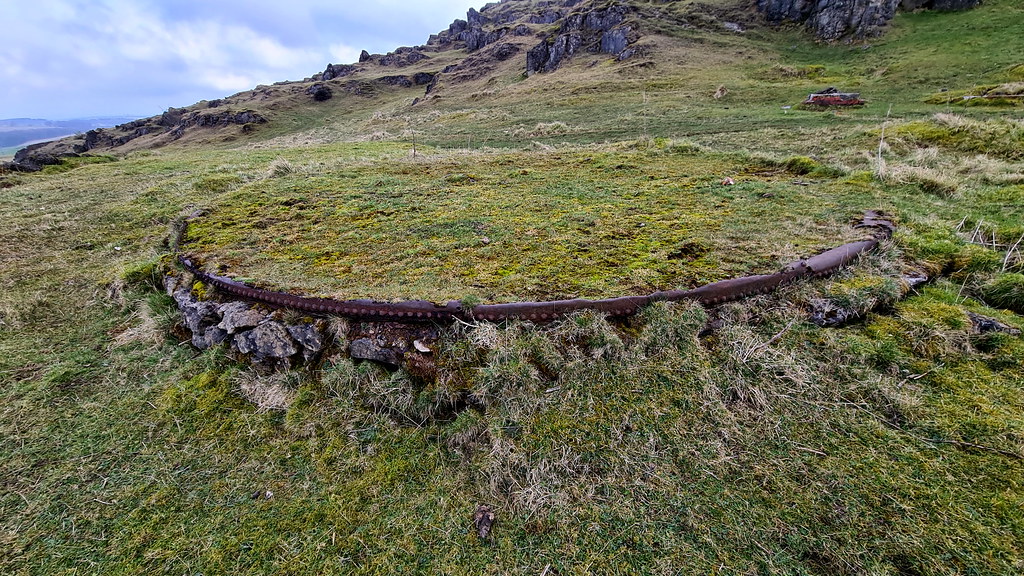 On to the two-room generator building: 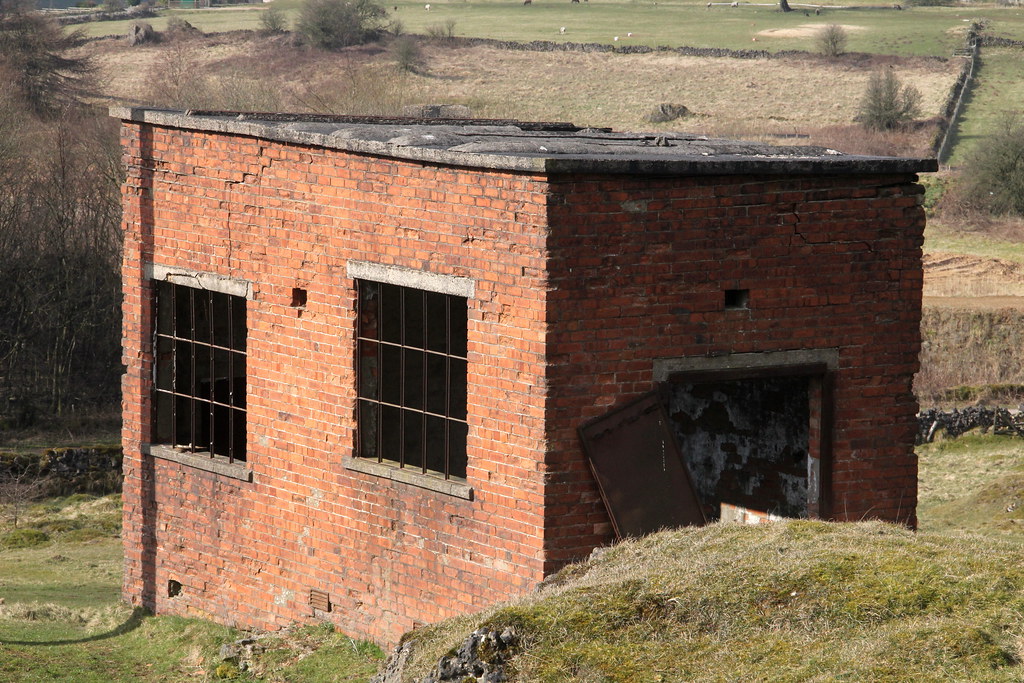 The first room is empty: 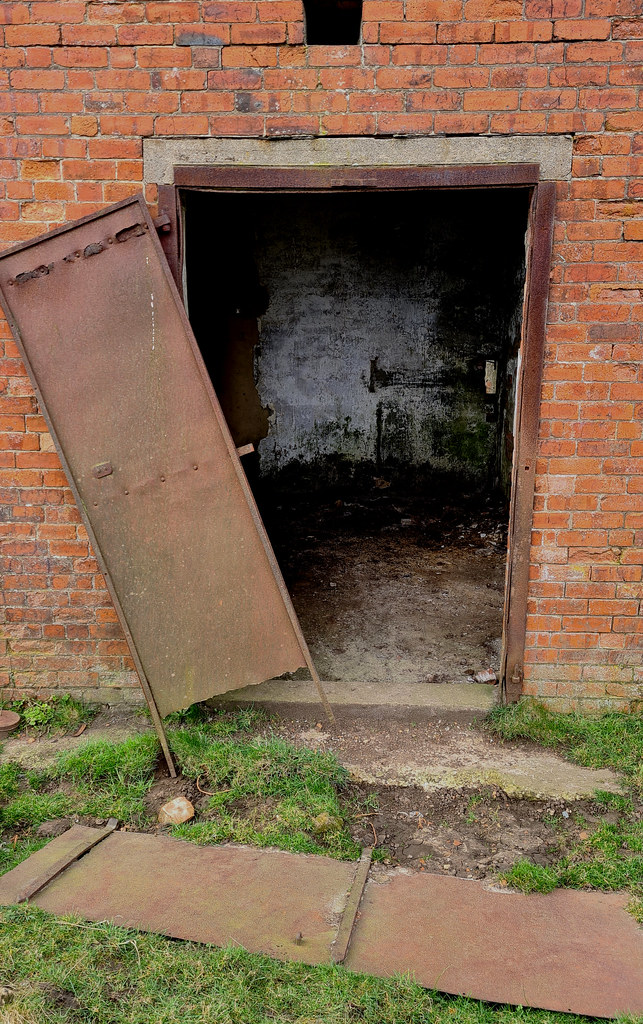 Round to the second room has got some of the old gear in there. 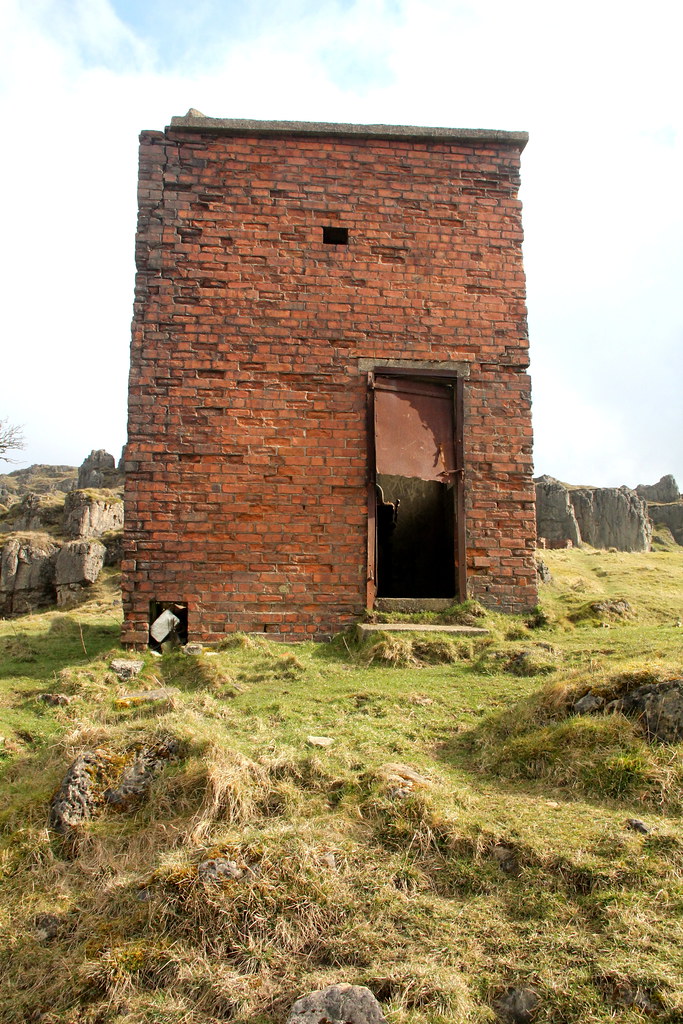 This looks to be quite old: 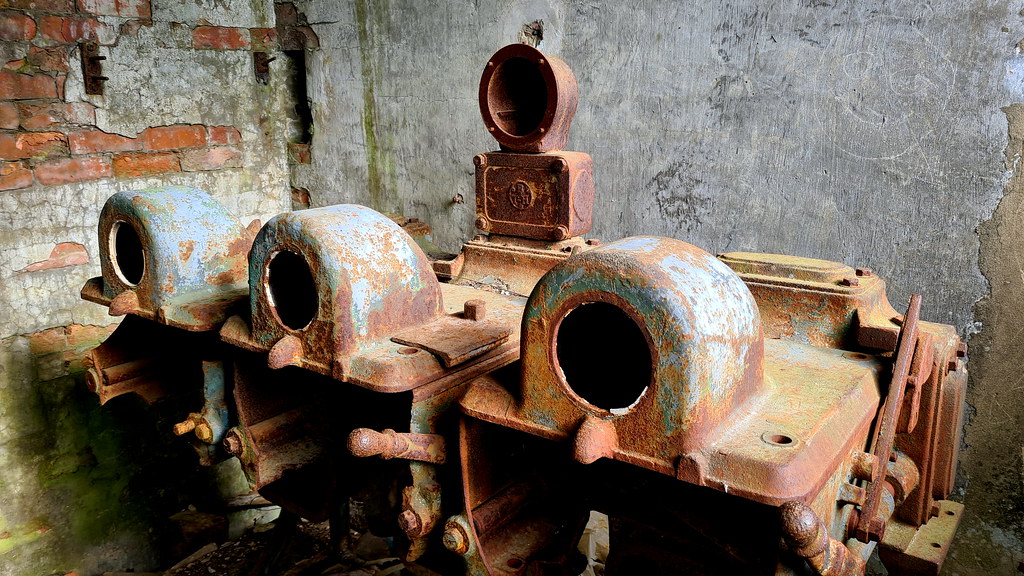 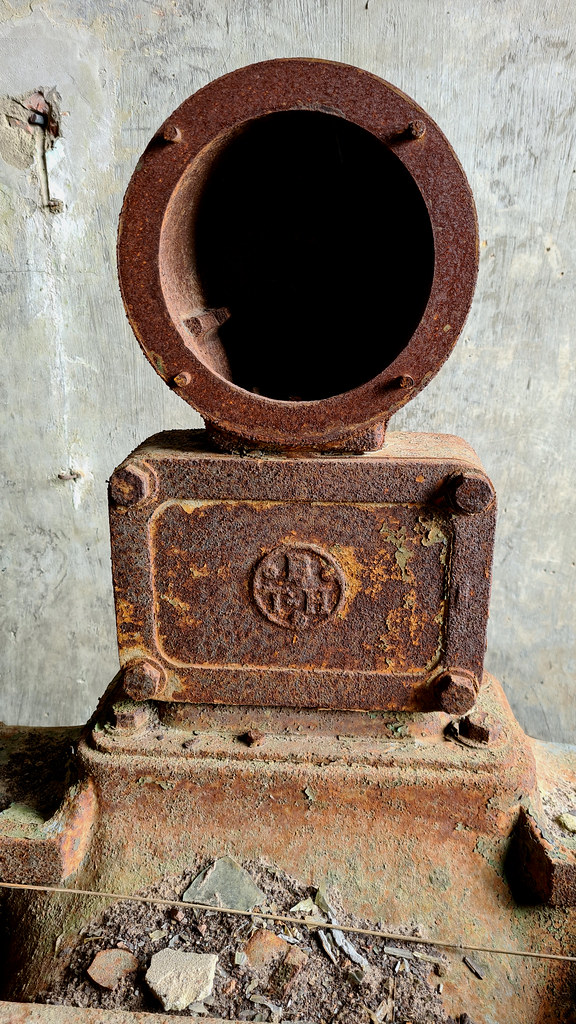 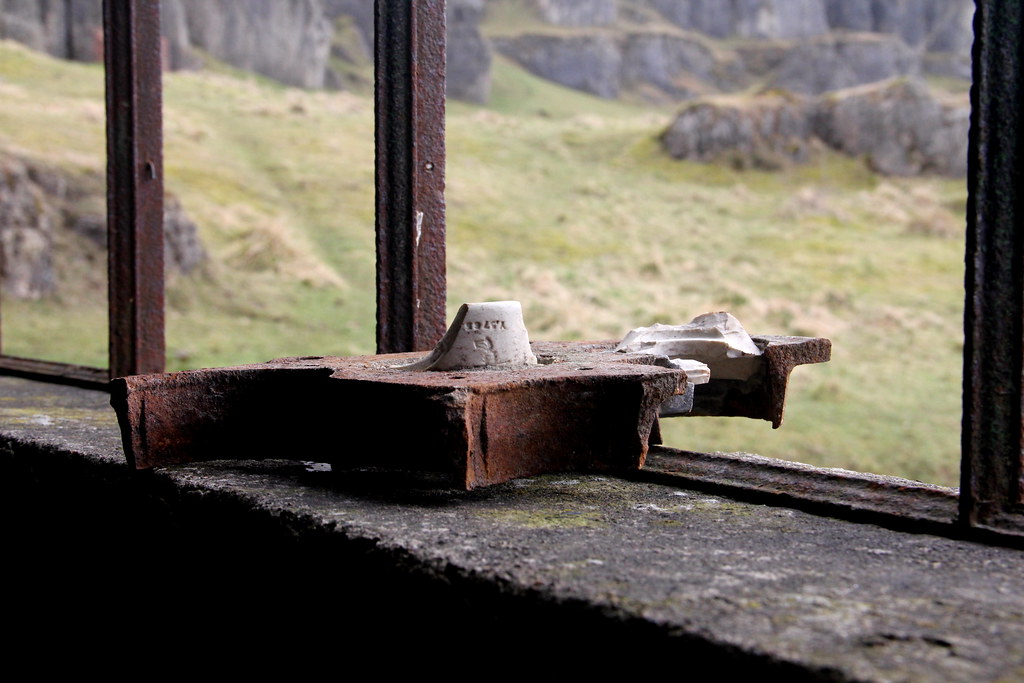 On to the main attraction via this old random iron bucket: 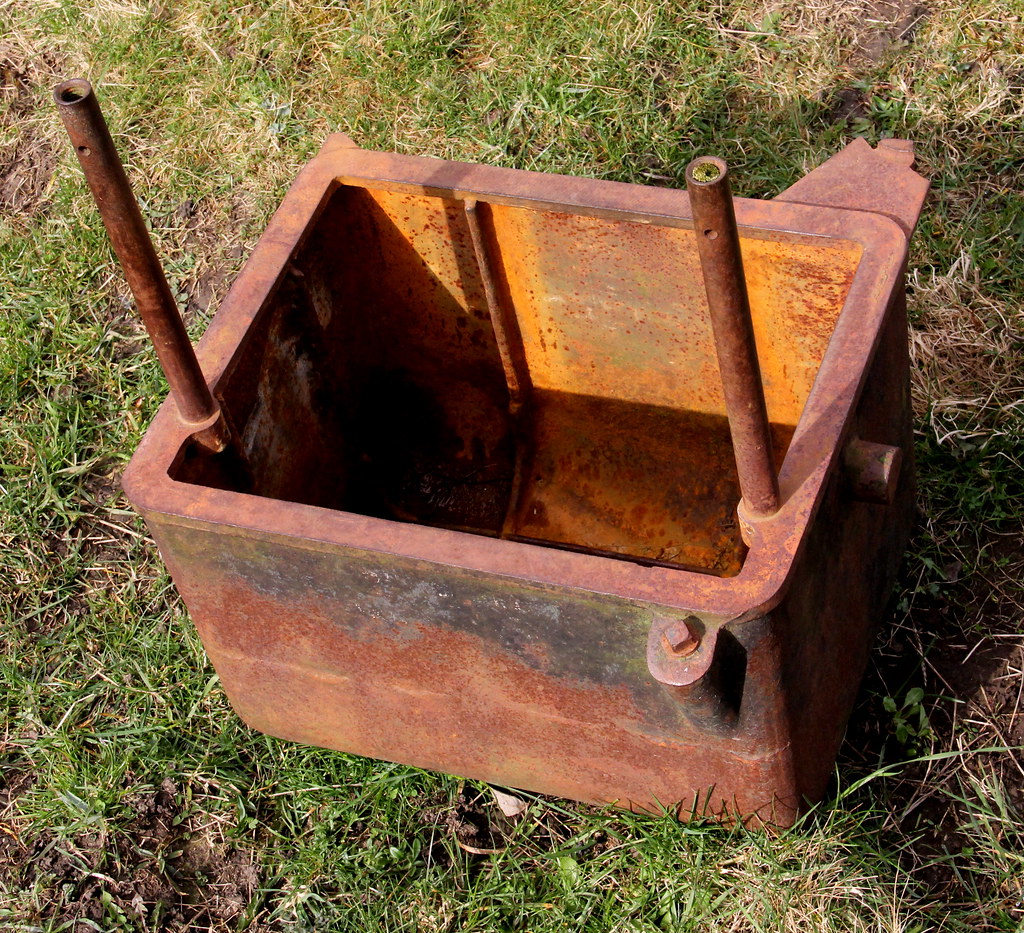 Overview with the rocks in the background: 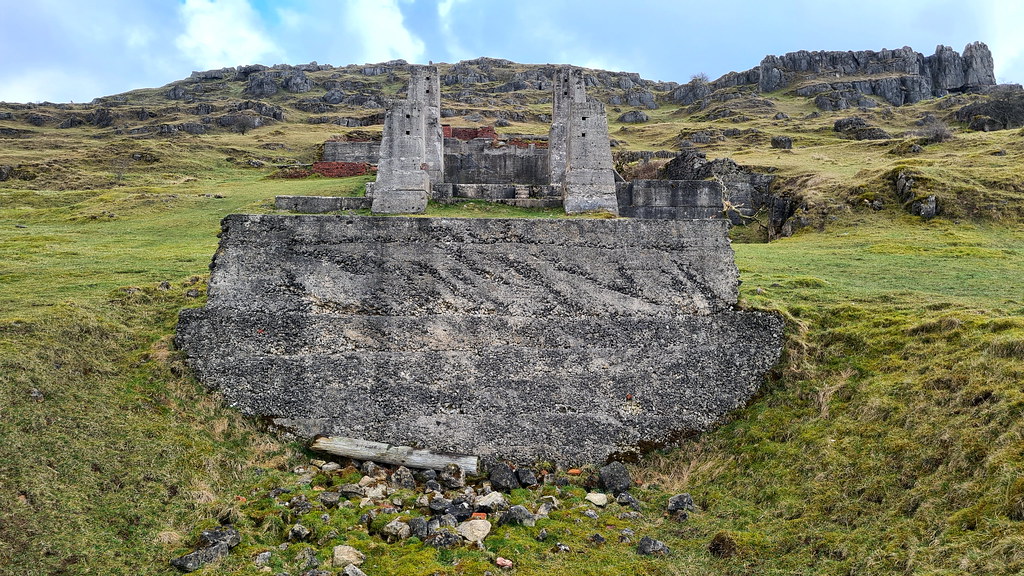 Back view of the columns: 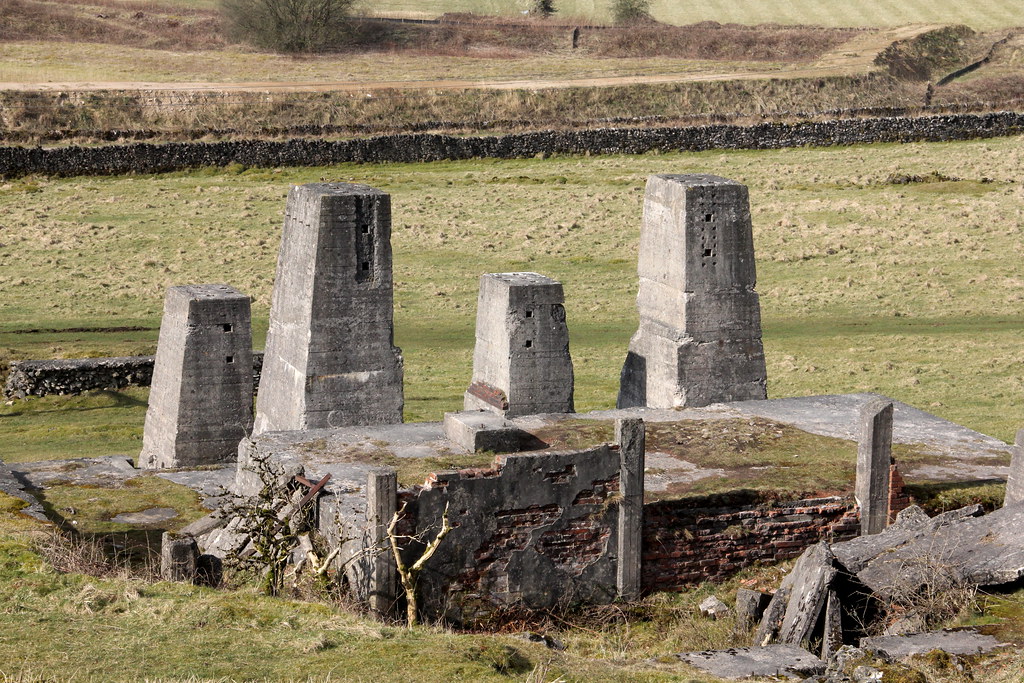 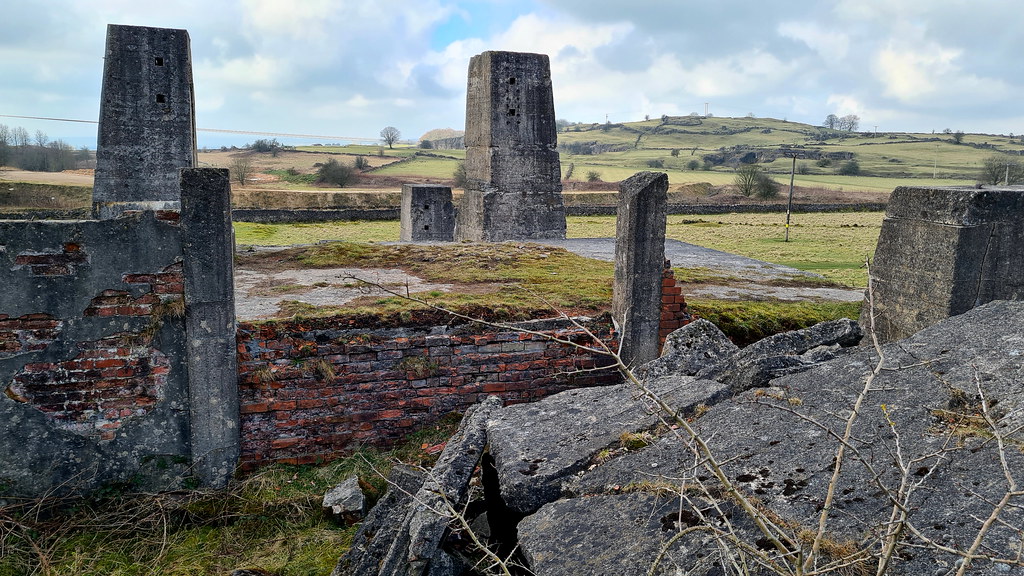 And a random cement staircase: 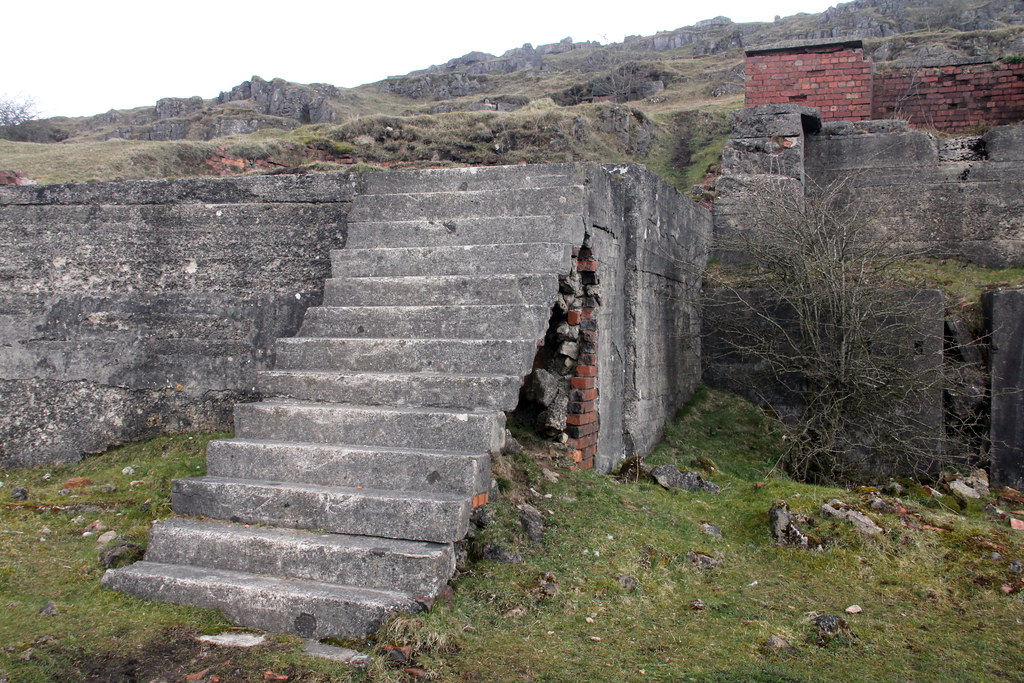 OK, that’s it for this curious little place: 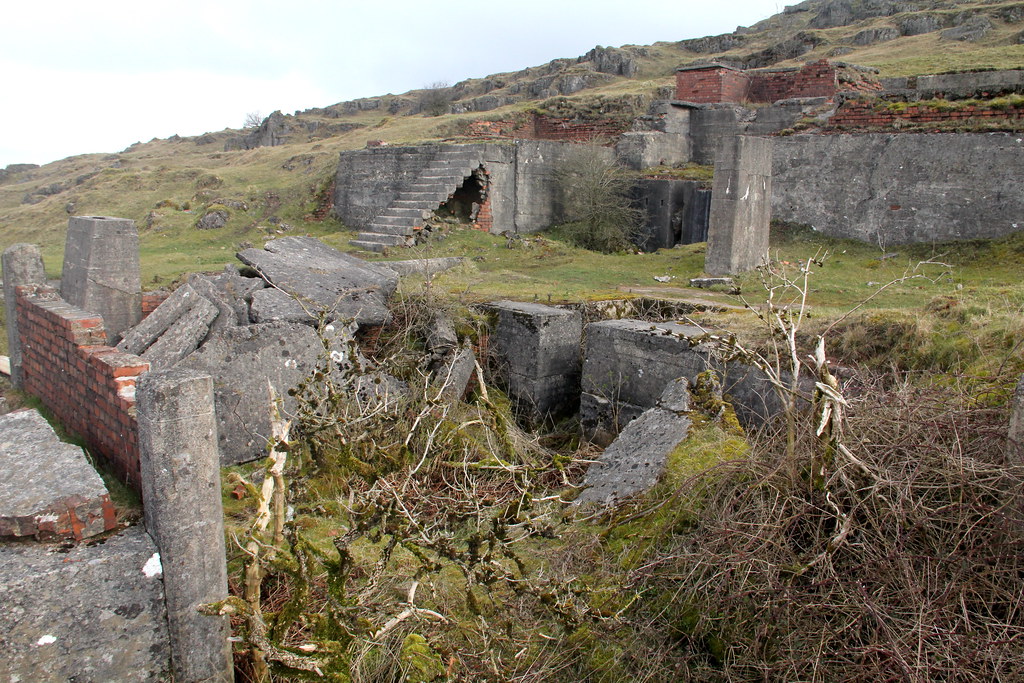 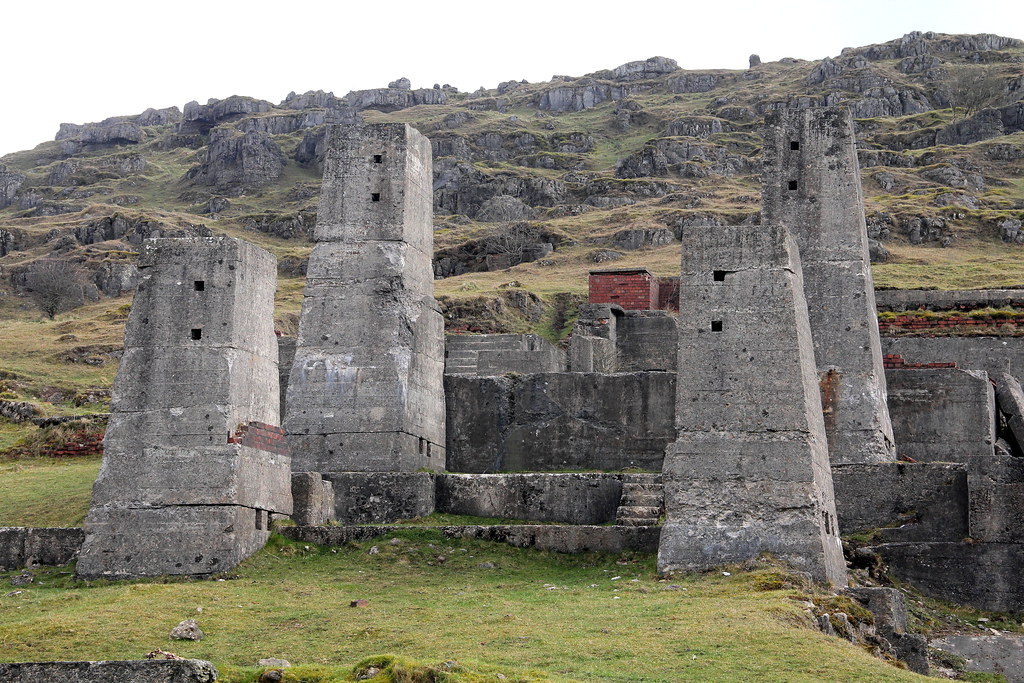 It's certainly a very photogenic place. I wish I lived nearer to such gems.

urban-dorset said:
It's certainly a very photogenic place. I wish I lived nearer to such gems.
Click to expand...

Road trip then! At least you know if you come up you are a guaranteed getting in.

If you go back to visit it may be worth going further up the hill to a stone carved armchair near the trig point at the top. Well some people say it is carved, others say it is a natural feature, but it's quite comfy and also has some 18th century graffiti on the back.
H

Yes, a very photogenic place - the concrete pillars remind me of some of the ancient Egyptian 'pylons', presumably they supported the crushing machinery now all gone. It's hard not to think of the monolith in 2001: A Space Odyssey. The circular pad may have been the base for a crane that could slew through 360 degrees.

The photo captioned "This looks to be quite old:" shows electrical equipment by BTH (British Thomson-Houston - an engineering and heavy industrial company based in Rugby. It was mainly involved with electrical control equipment and power generation. The BTH symbol is on the faceplate of the steel box below where heavy-duty electrical cabling was fed into what looks to have been part of the electrical control switchgear.


The object on the window sill may have been an iron/steel casting that had a white metal or other alloy bearing for a shaft that rotated in the bearing. Stamped on the lighter metal is "Y,5765" (turn the photo upside down to read it). And above the number is what may have been the maker's logo or symbol; it looks vaguely like a medieval helmet.

The "old random iron bucket" seems to have escaped the scrap merchant's eye; there are two small rust-coloured objects in the photo captioned "Overview with the rocks in the background:"

The crushed material from the quarry seems to have been taken away by road. How close was the nearest railway?

Really enjoyed looking at this one Hughie! I like the gentle rusting of the old iron works and the pic looking out of the ice store