Heinrich Himmler, Born 1900: Prominent leader of the Nazi Party.
He was the second most powerful man in Germany, and almost entirely responsible for the holocaust. One evil, evil, motherfurher.

He joined the Nazi party in 1923, the SS in 1925, and by 1929 he was running it. Over the next 16 years he took it from a 290 man rag tag gang, to a million strong paramilitary army of hate.
His organisational skills are the main reason he was given the task of exterminating the Jewish population as quickly, efficiently, and brutally as possible. To my mind he was worse than Hitler, he was the one who directed the day to day slaughter of innocent people, and he enjoyed it.

After evicting a wealthy Jewish family, he decided that he actually quite like their lake side palace, so he took it. Simple as that. 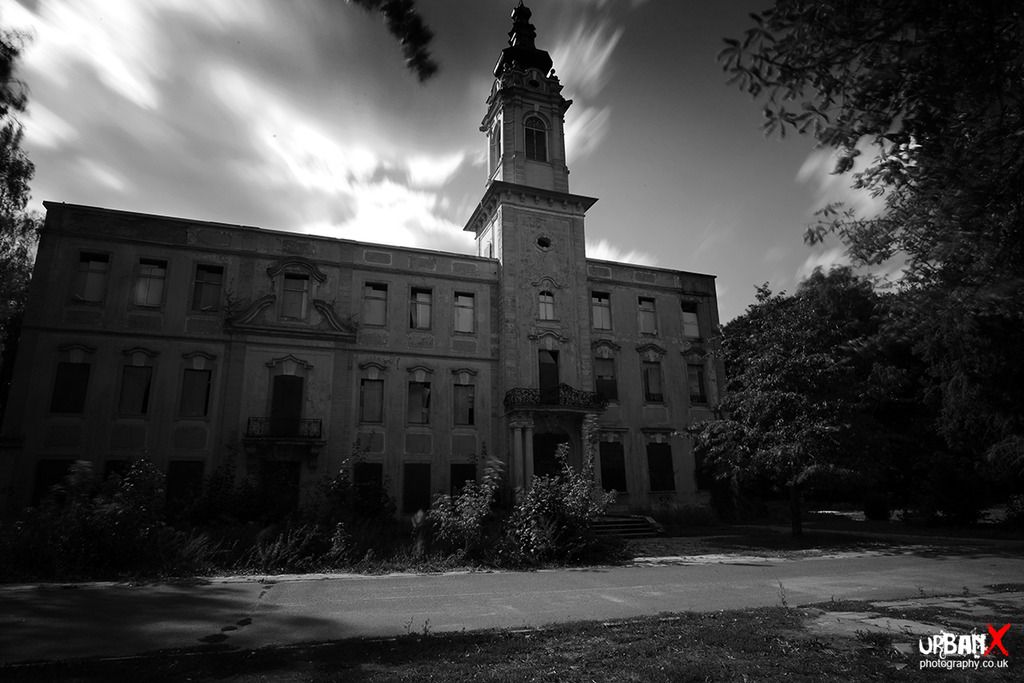 It all looks innocent enough, and our explore started with an extremely pedestrian drive down a nice country lane. The only tell tale sign that something was slightly afoot was the guardroom at the bottom of the drive. It was huge. A normal guard room houses what, up to 30 men if you were expecting something? This must be ten times that.

Once past the guard house, normal country lane service is resumed. The dappled light through the trees flashed pleasantly on my face, and the warm breeze through the passenger window blew through my hair. I closed my eyes and everything changed. I could just feel hate. Eighty years ago, Hitler would have bounced up this very driveway to discuss how they could best carry out the atrocities, probably over a 16 course banquet. I felt cold. I felt sick.

We parked up to make the last bit on foot, I could see the shadow of the house through the trees. I rounded the corner and what I saw next shocked me more than anything that had gone through my mind on the driveway….


A couple were having their wedding photos done in front of the house. 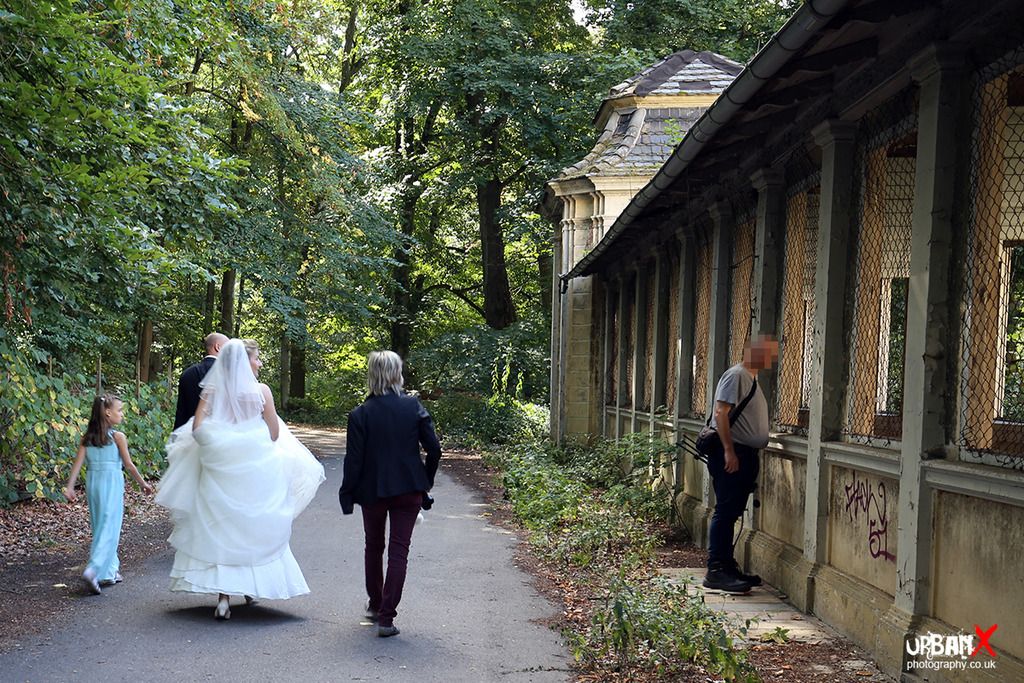 I was genuinely speechless. I can only assume they have no idea whatsoever of the house, and just thought it was somewhere cool to have their pics done. Seriously. 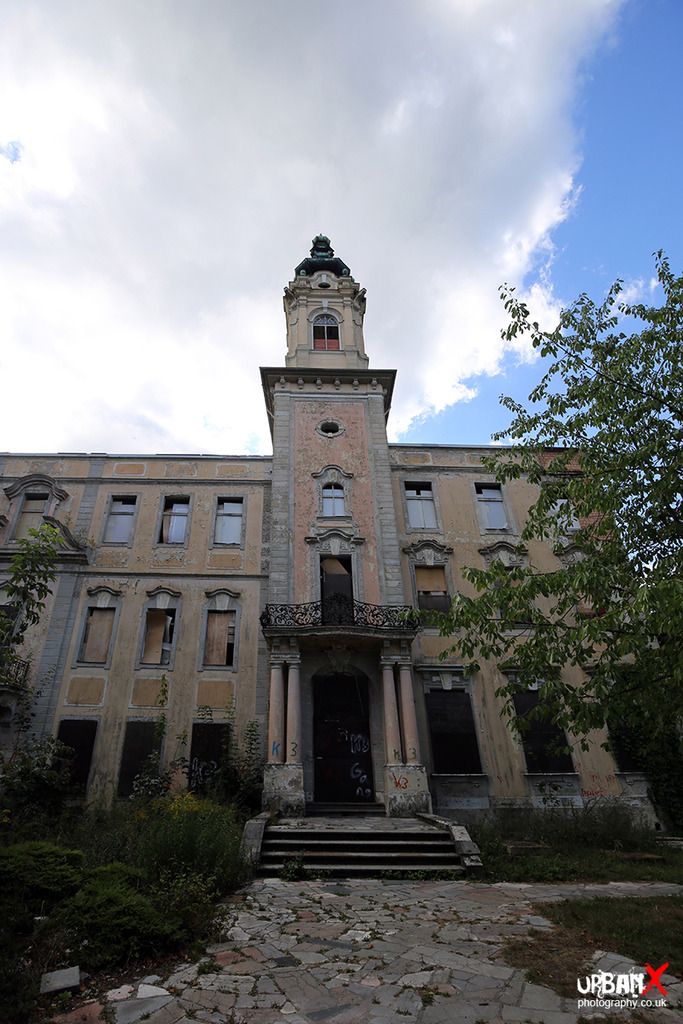 The house is understandably secure, so it’s just externals. To be honest I had no desire to go in. 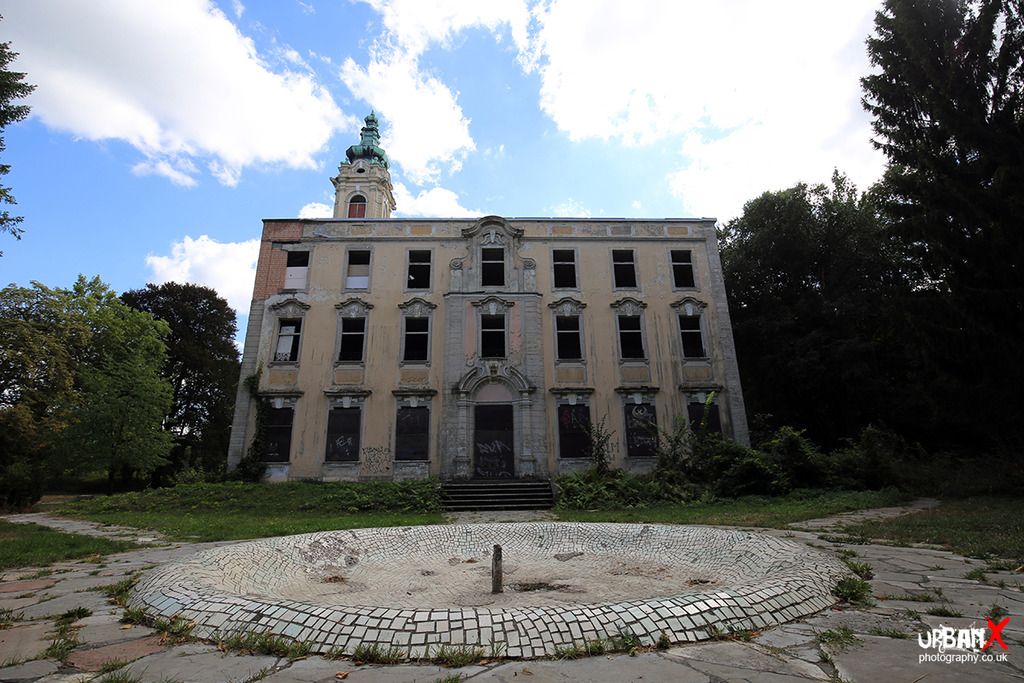 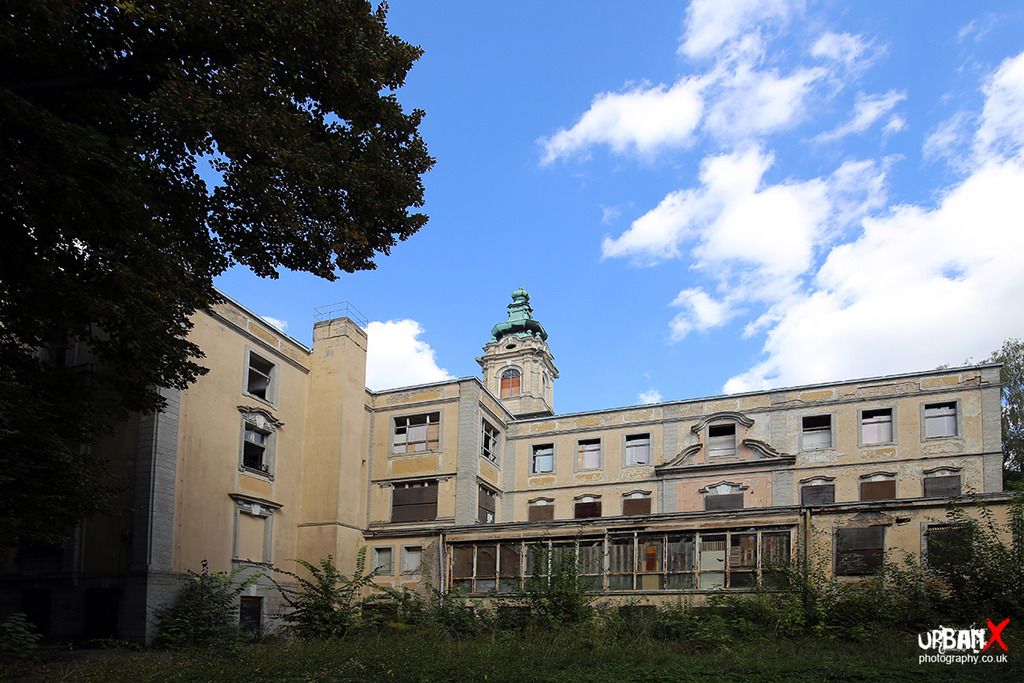 I noticed the balustrading had been replaced with a pattern incorporating a “H H” emblem: 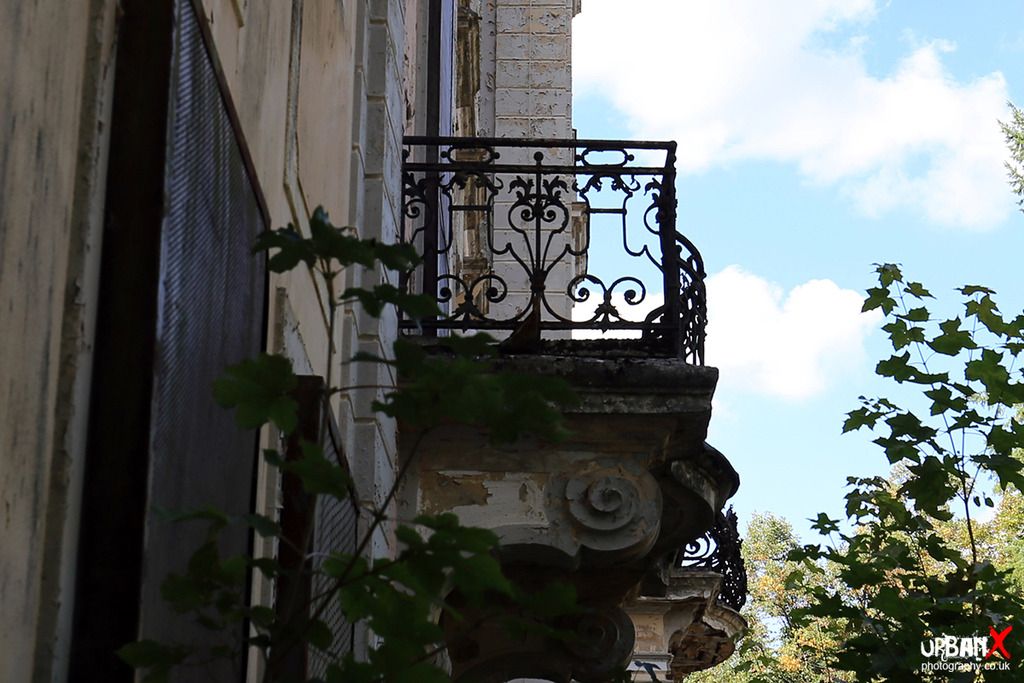 There were some other buildings around the site, commercial kitchen, coal store (made to look like a cave) and even a pavilion housing a bowling alley (Who knew?). 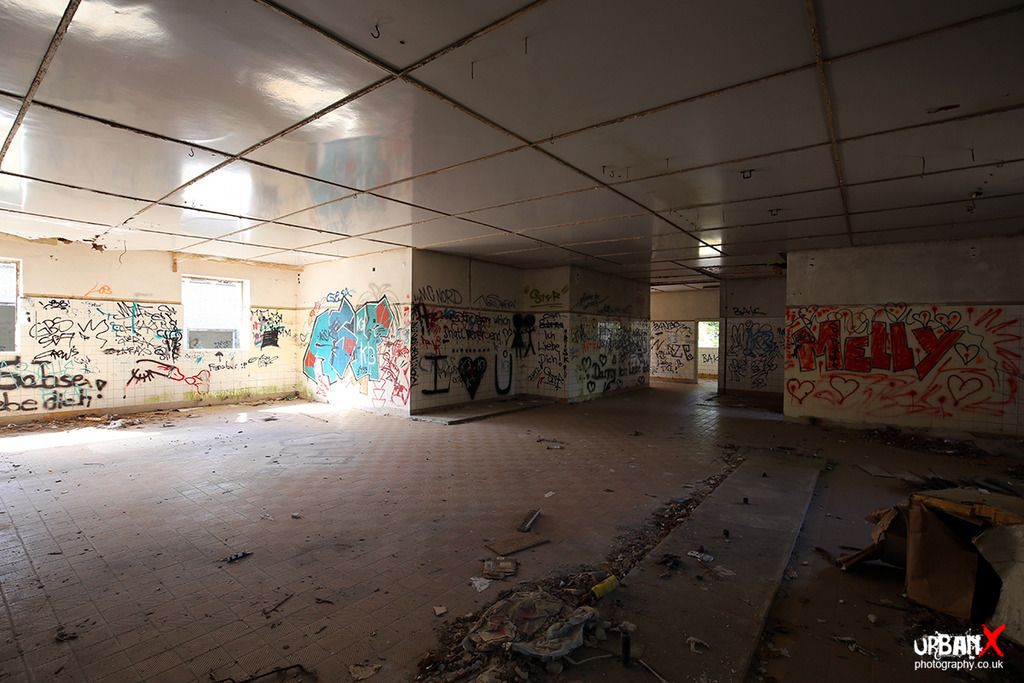 Normally after visiting a site there’s an air of jubilation and accomplishment in the car. The car was silent as it slowly bobbed back down the driveway. I was just glad to be getting onto the next location. 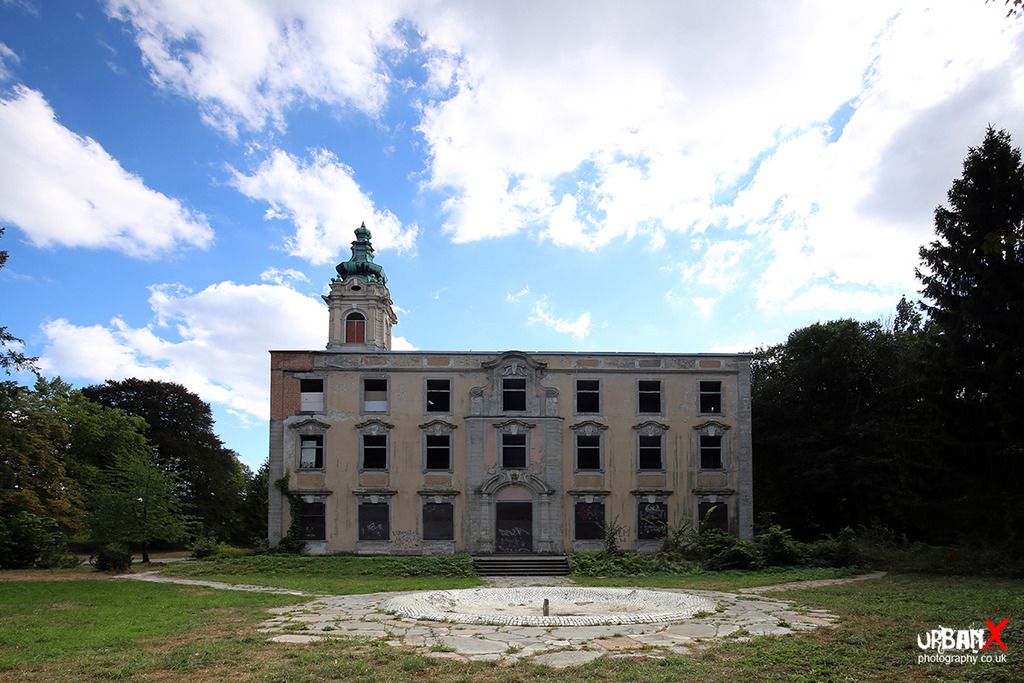 Man...that's a place with a past. Thank you for sharing.

UrbanX said:
I noticed the balustrading had been replaced with a pattern incorporating a “H H” emblem
Click to expand...

Looks like a pair of knobs to me, but there you go.

TBF He had more than one house… How much time he spent at each I couldn't tell you, I wasn't there.

I was shying away from posting links on here as I didn’t want the location details to outweigh the history. But every mention of the place includes the former owner. It is very publicly known (especially locally, which I expect the wedding tog was) that it was seized for Himmlers possession.

"Ten years later, in 1929, the Briton acquired Harry Goodwin Hart , then director of Unilever , the property. After Hart had to leave Germany with his Jewish wife in 1938, he was expropriated in 1940. Now the castle came into the possession of Heinrich Himmler . From January to July 1943, 20 to 25 prisoners from the Sachsenhausen concentration camp were used for construction and maintenance work"
Wolfgang Benz , Barbara Thistle (ed.): The place of terror . History of the Nazi concentration camps. Volume 3, Sachsenhausen, Buchenwald. CH Beck, Munich 2006

"SS chief Himmler took over in 1940 and used Schloß Dammsmühle as a base and a fancy guesthouse. "
https://www.abandonedberlin.com/2014/08/rapunzels-castle-schloss-dammsmuehle-stasi-SS-abandoned.html

"Once there stood a Hubertus pavilion. But it no longer exists, just as little as rose gardens, orchards, vineyards or an oriental-looking dance hall on the mill pond - possibly already lost in the Nazi era, when SS leader Heinrich Himmler came into the possession of the estate through expropriation and prisoners from the concentration camp Sachsenhausen used for construction measures. "
Bederke, Jeanette: Berliner Morganpost 21.03.2019 https://www.morgenpost.de/brandenbu...-So-soll-die-Ruine-zum-Luxushotel-werden.html


"At the end of the twenties, Harry Goodwin Hart, then director of Unilever, acquired the estate. In the Second World War it was taken over by SS leader Heinrich Himmler” "
Pleul, Patrick. Broadcast: Inforadio, 20.03.2019, 10 o'clock

"The castle changed hands several times in the following years , until 1940, the propaganda leader of the NSDAP , Heinrich Himmler, received the estate. "
Sturlz, Julia: ‘A Brandenberg ruin becomes a fairytale castle’ https://www.qiez.de/schloss-dammsmuehle-lost-places-ausflugsziele/

"The seizure of power by the Nazis changed everything in 1933: the Harts were Jews. They left Berlin in 1938 for Switzerland.
1940: The SS secures the castle The castle was expropriated in 1940 for SS boss Heinrich Himmler"
Bederke, Jeanette: German Press Agency: 31.03.2019 - http://www.burgerbe.de/2019/03/31/schloss-dammsmuehle-soll-luxushotel-werden/


"The Harts were stripped of their assets in Germany and forced to sell the property to the Nazi State in 1941 for 445,000 Reichs Mark. Heinrich Himmler took control over the property and made it his own, forcing 20-25 inmates from the concentration camp Sachsenhausen to perform various labour duties on the grounds from January to July 1943"
The Digital Cosomnaught, 2017 via contact[@]digitalcosmonaut.com

"1940 After the confiscation of the site as "enemy assets" by the Nazi regime, it is officially subordinate to the Reichsführer of the SS, Heinrich Himmler. "
Komoot Tours


There was also a really good article in the muehlenspiegel recently about Himmlers ownership of the property: (apologies for the dodgy scan) 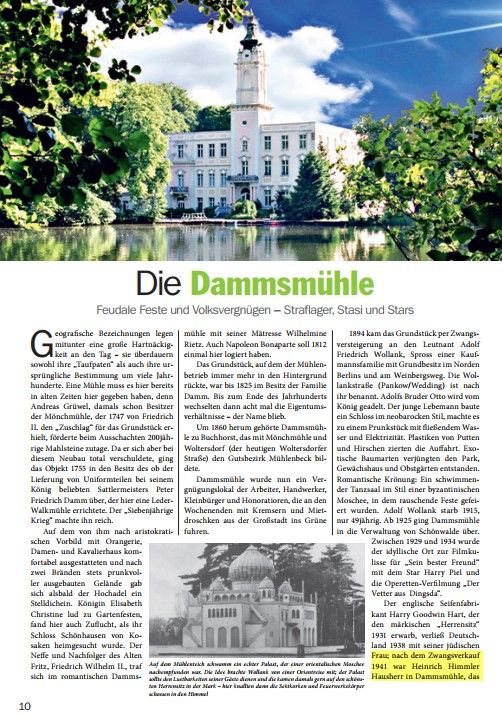 Although there is an even better article here by Erich Mielke, which includes internals 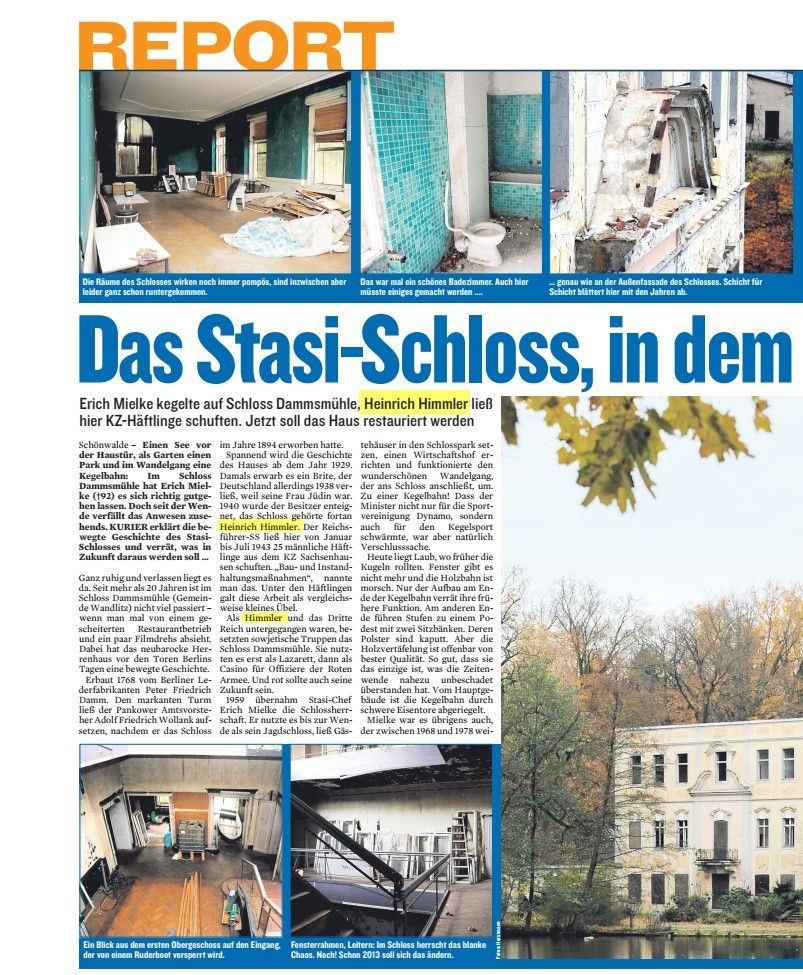 I thought that too!
C

muppix said:
Looks like a pair of knobs to me, but there you go.

I thought that too!

clinka said:
I thought that too!
Click to expand...

Get your minds out the gutter! I've since found out that by complete coincidence the previous occupant's initials were also 'HH' so they're probably original.

Thanks for all the links you inserted. I was never in doubt that you got the wrong building, but I can read German and in the report by Erich Mielke he stated that Himmler lived there from January 1940 to July of 1943 and he used this house as a base and a fancy guest house. But his family lived in Tergensee.

Hugh Jorgan said:
Thanks for all the links you inserted. I was never in doubt that you got the wrong building, but I can read German and in the report by Erich Mielke he stated that Himmler lived there from January 1940 to July of 1943 and he used this house as a base and a fancy guest house. But his family lived in Tergensee.
Click to expand...

Cool, will re-word the report to state that Heinrich Himmler definitely did live here, but maybe some of his extended family didn’t...

UrbanX said:
Cool, will re-word the report to state that Heinrich Himmler definitely did live here, but maybe some of his extended family didn’t...
Click to expand...

Get your facts straight Lee!!