Much like my post on Grossinger's Resort from my first trip over, this is going to be quite text and photo heavy as it's one of those places which I had wanted to see for so long, and which really piqued my interest.

Horace Mann High School in Gary, Indiana is the city's largest derelict school as well as one of it's most famous. It is on the shortlist of American high schools that graduated more than 75 classes of students during their lifetimes and was unique among schools in Gary, featuring landscaped gardens, multiple pools and gyms and even a large pond. All of this was the creation of innovative educator William Wirt who had a new vision for education in the city and in particular at Horace Mann. Construction began in 1918 and carried on in bits and pieces for a decade, before the grand opening in 1928.

The building itself was actually a trio of buildings joined together, constructed in a classic tudor style. The main building boasted grand entranceways offset by white columns. The central building housed 48 classrooms as well as the senior staff's offices. It also contained two libraries, the auditorium, cafeteria, refectory, two gyms and two swimming pools (at the time the school was built both gyms and swimming pools were separated by gender). When the school opened it served everyone through Kindergarten to 12th Grade.

The west building initially served Kindergarten through 3rd grade, but later it included the music department, ROTC headquarters, a general shop, and additional classrooms and offices. The west building would also host the school’s new modern gymnasium, which was added to the rear of the building later in 1985. The east building was largely administrative offices and contained the school’s printing department in the basement.

By 1937 the staff at Horace Mann had increased to 80 while enrollment had grown to 2,386. The school’s athletic program had enjoyed some success during this time, producing one of the school’s most famous alums in Tom Harmon. The student base continued to grow, and by 1956 Horace Mann boasted an enrollment of 2,597 – greater than the school’s designed capacity. Overcrowding would soon force the school to split. In 1958 the wooded area in front of the school was cleared, the land flattened, and a new school–the John H. Vohr Elementary–was built in its place.

When Horace Mann opened it's doors in 1928, it was an all-white school. It was slow to de-segregate, and the construction of all-black schools during that period only lessened the apparent need for it to do so. By the 1960s the school was integrated, but still overcrowded, and this exacerbated the racial tensions existing in the city at the time. When Gary's first black mayor was elected in 1967, it started what became known as 'white flight', as tens of thousands of white citizens moved away from Gary. The population of the city dwindled as did enrolment at Horace Mann - in the 1950s the school was 100% white. By the time it shut it's doors in 2004, 98% of the students were black and 2% latino. In 2003, numerous schools were proposed for closure and first on the list were those running way below capacity. This included Horace Mann, which by that time only had 546 students on it's books - 1/5 of it's maximum capacity.

Horace Mann closed for good on June 10th, 2004 following a closing ceremony held by old students, teachers and other supporters who had lobbied to keep the school open. The final class of 2004 yielded 72 proud graduates.

Horace Mann High School still sits derelict and decaying eleven years after it closed it's doors. During that time it has been heavily vandalised, but the school is still a seriously impressive sight. It's in much the same condition as the old Liege Mechanics Institute and indeed feels like that in certain parts, with so many laboratories and long corridors.

We arrived in Gary at about 9am one Sunday morning and immediately realised that there was some kind of event taking place on the old playing field behind the school. Lots of cars turning up and pickup trucks with smokers and barbecues and suchlike being taken onto the field. Luckily the access point is nowhere near the field so we got in undisturbed and spent a number of hours wandering the huge school. After leaving we asked one of the locals what was going on, and we were stunned when he replied 'it's a school reunion'. It was then we saw all the middle-aged men and women walking down the street wearing 'Horace Mann' t-shirts! Personally I couldn't believe our timing, of all the days to show up and explore a school it had to be then. 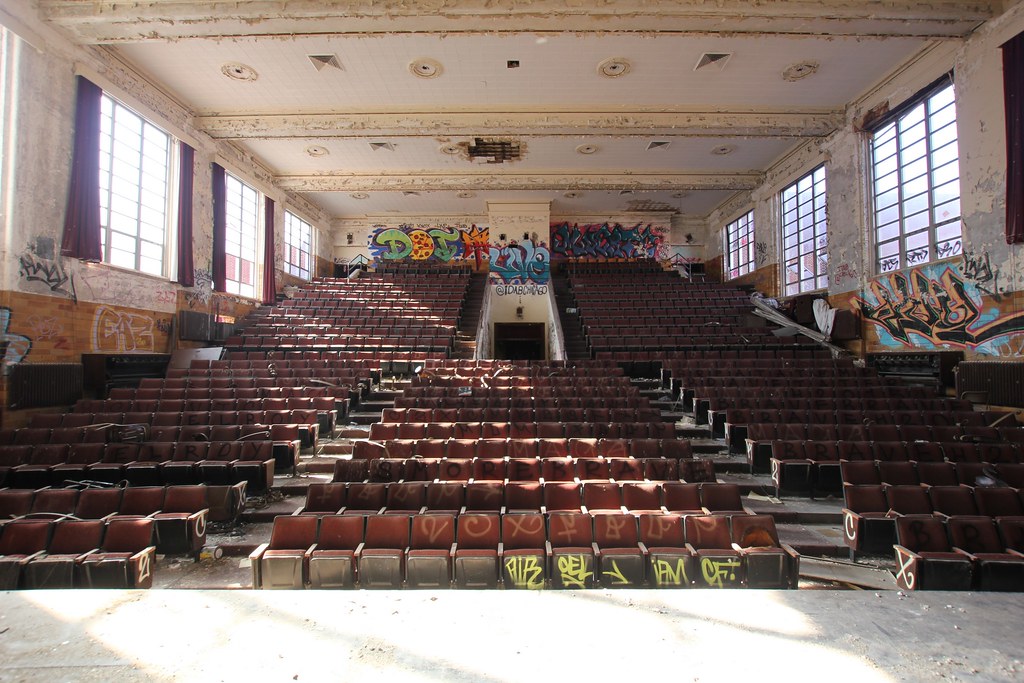 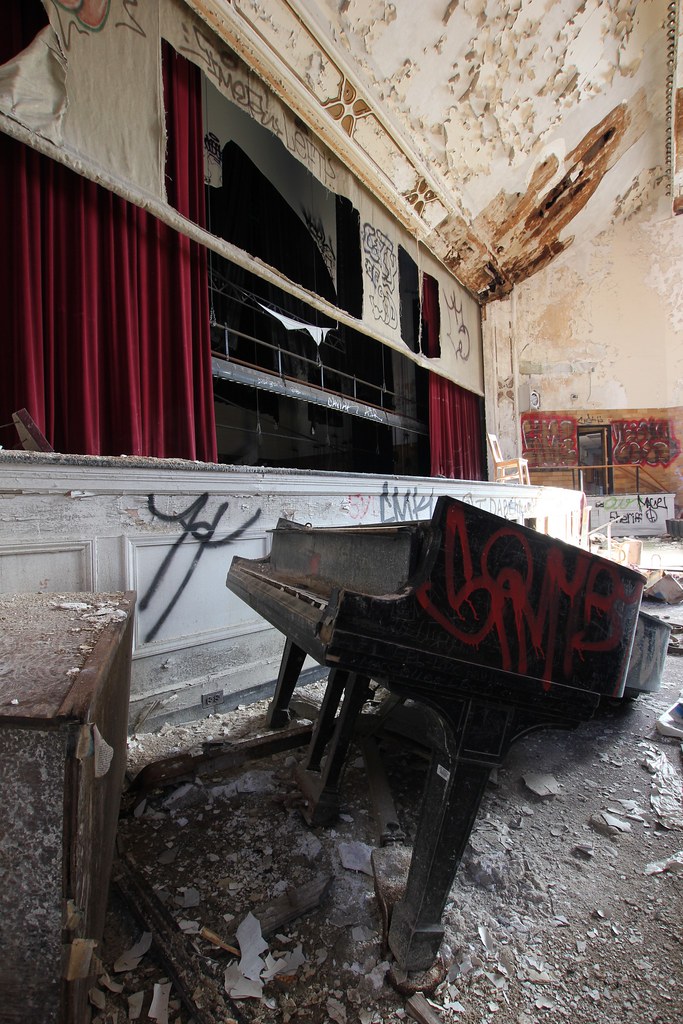 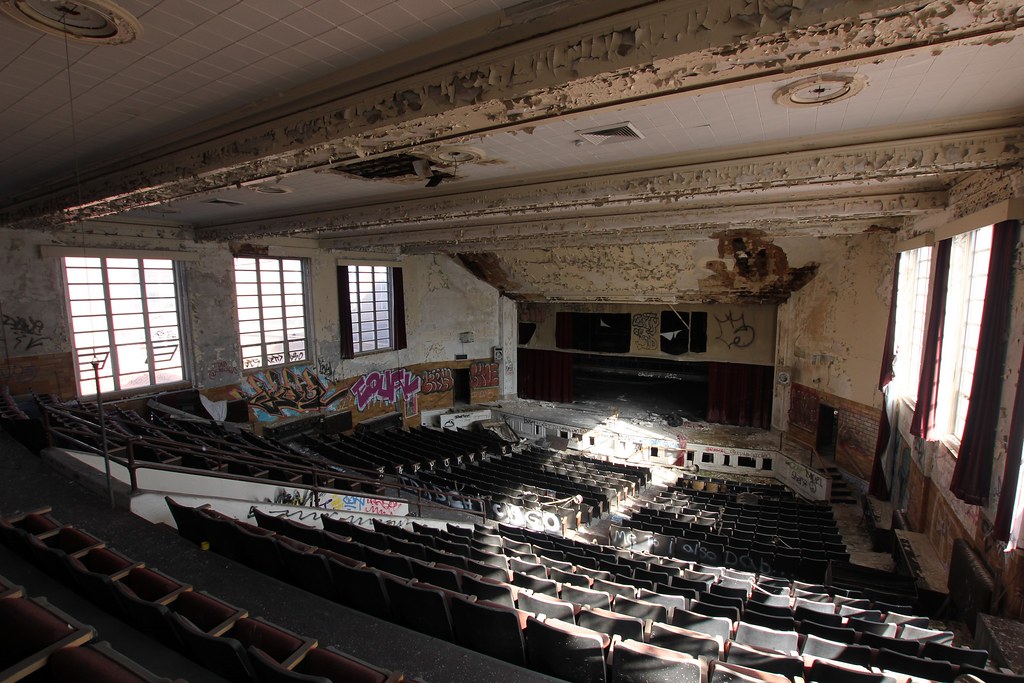 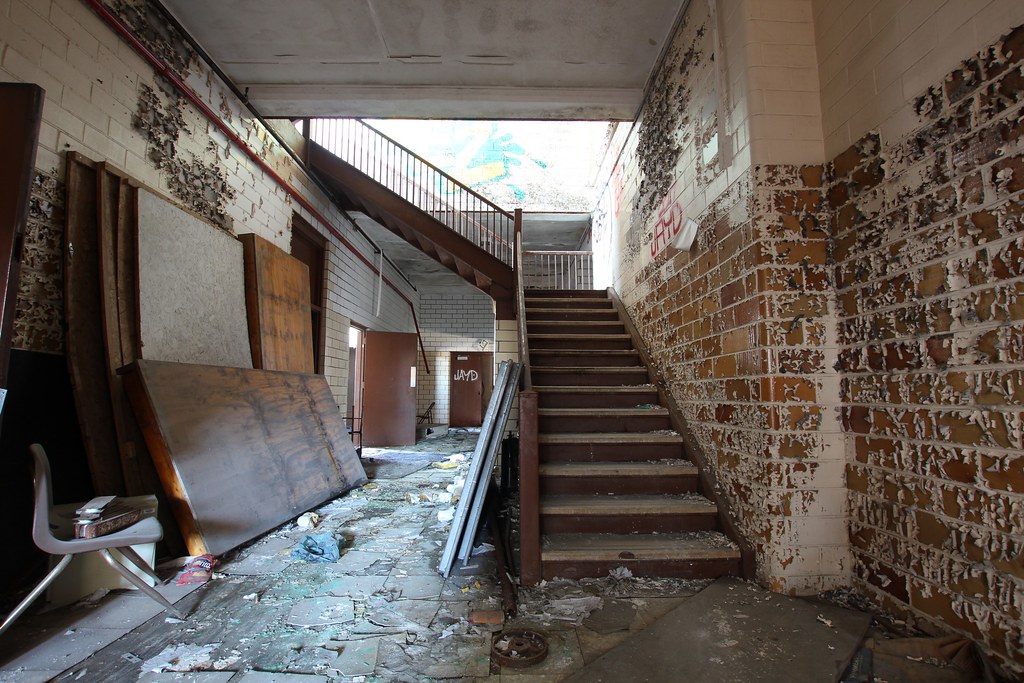 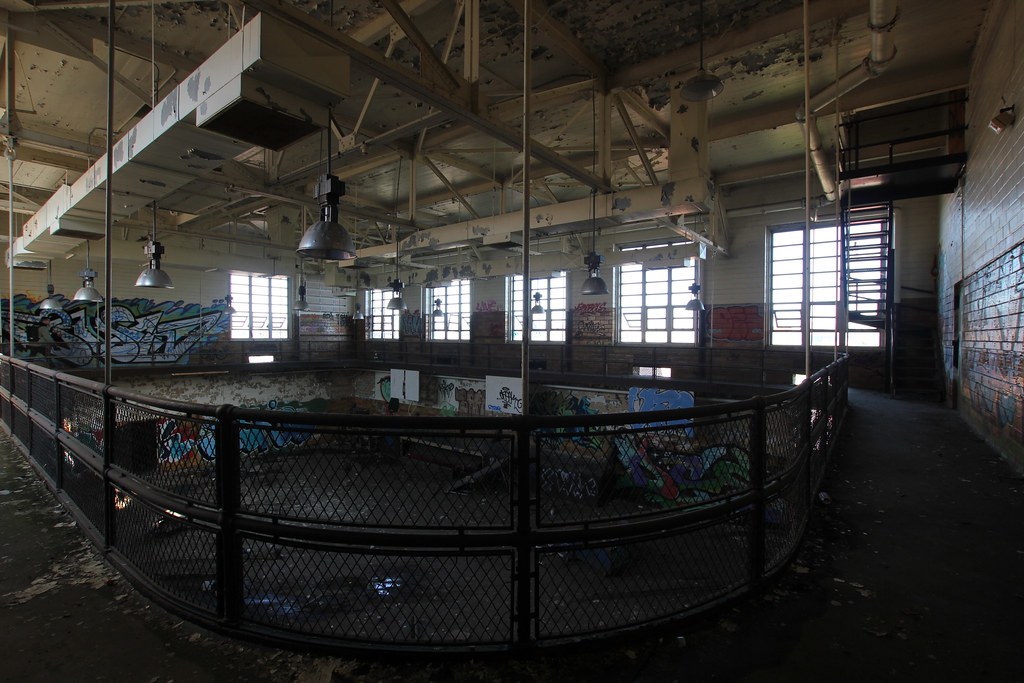 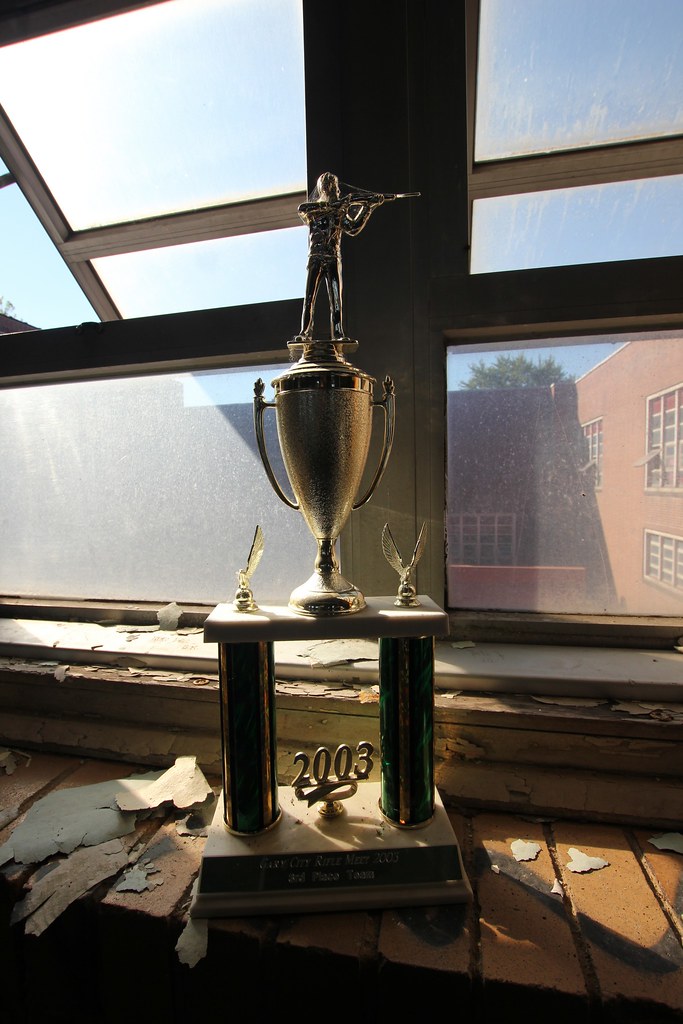 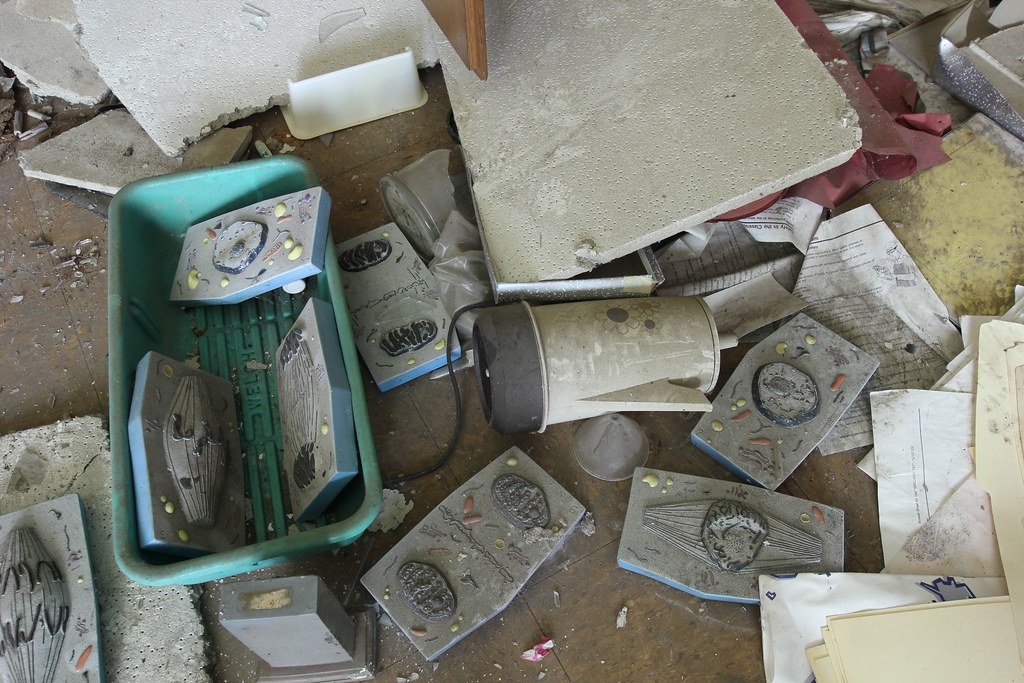 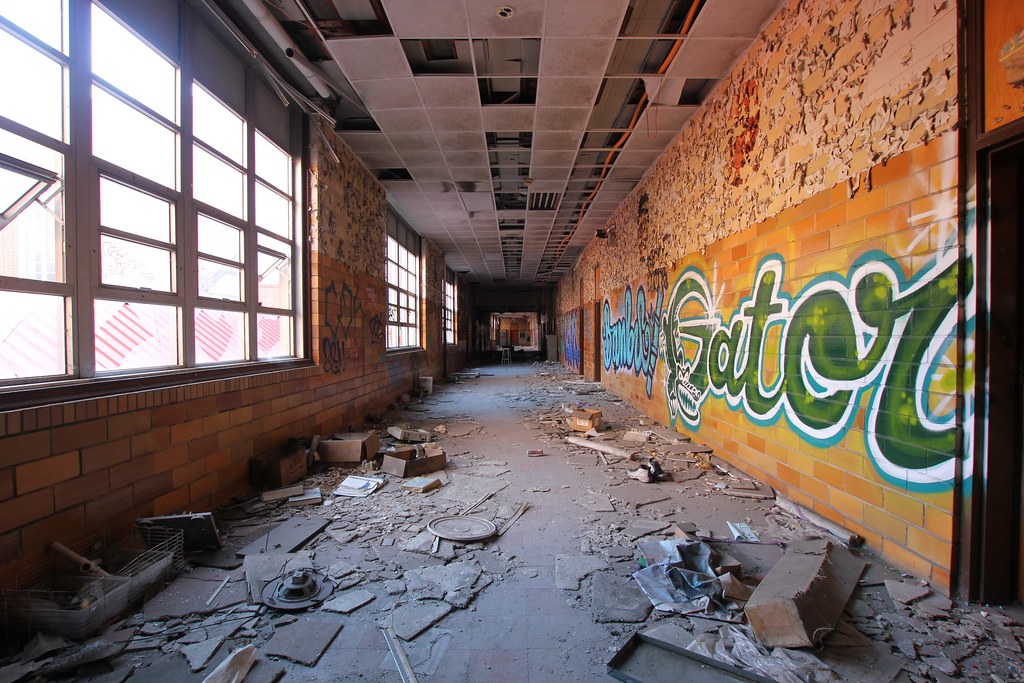 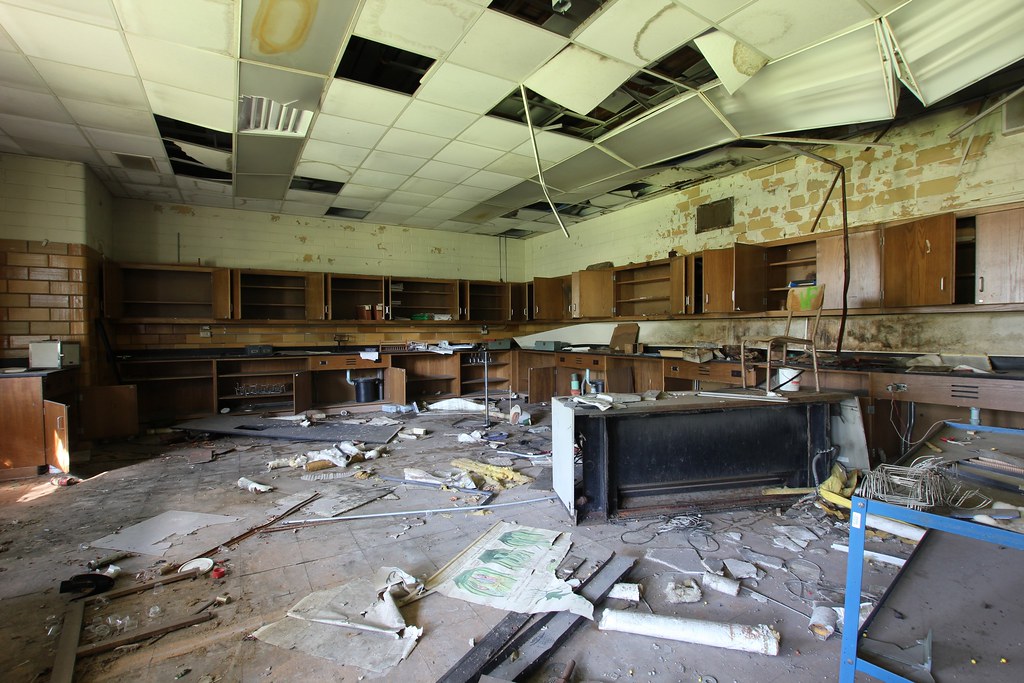 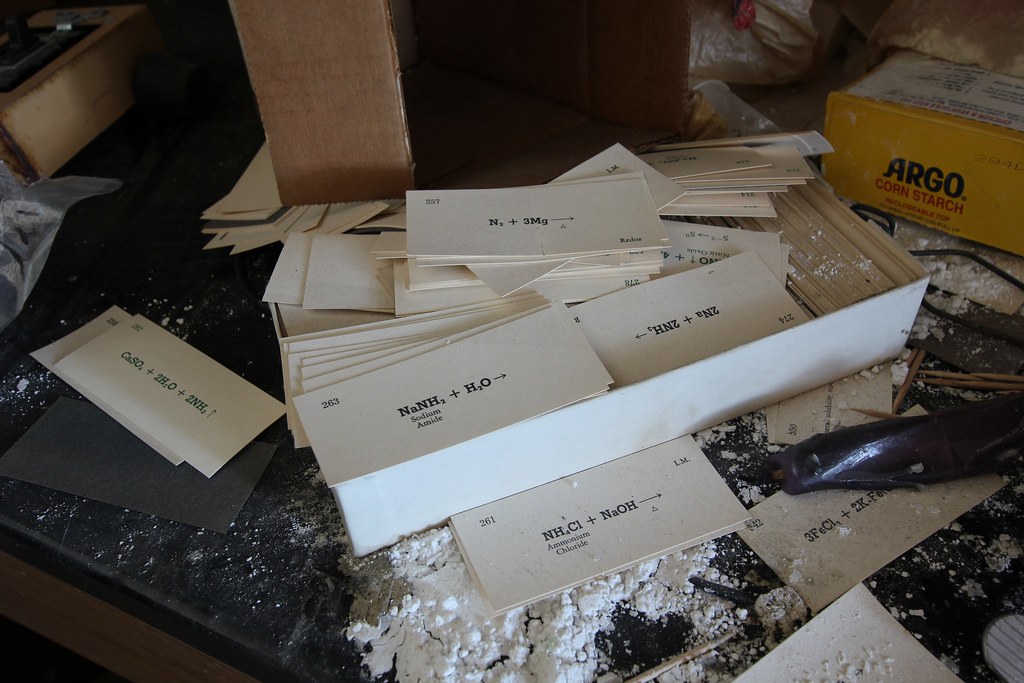 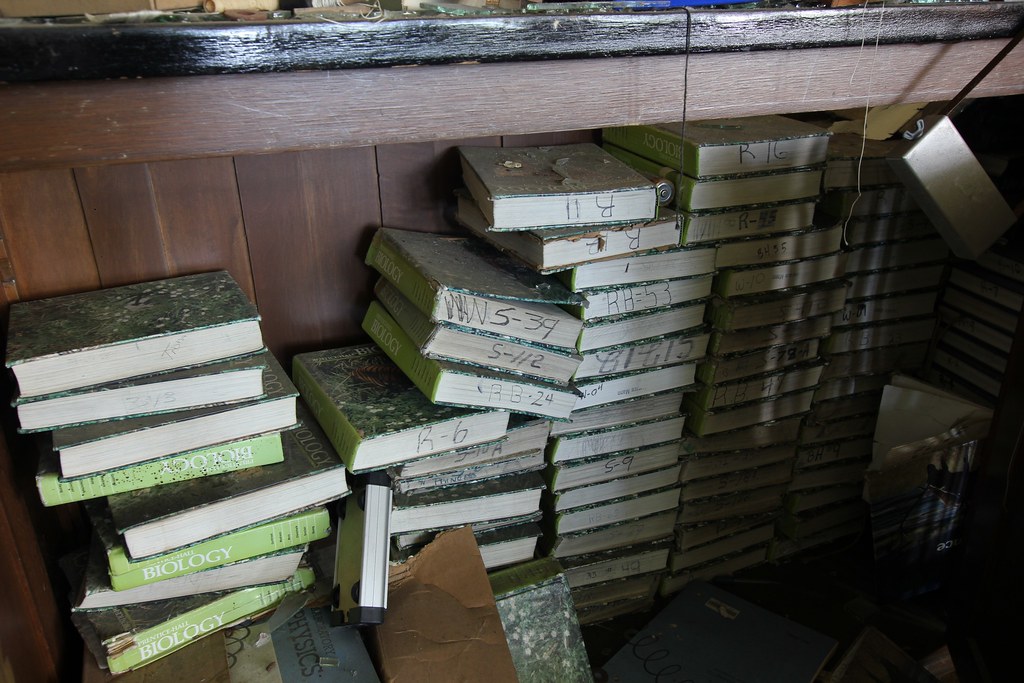 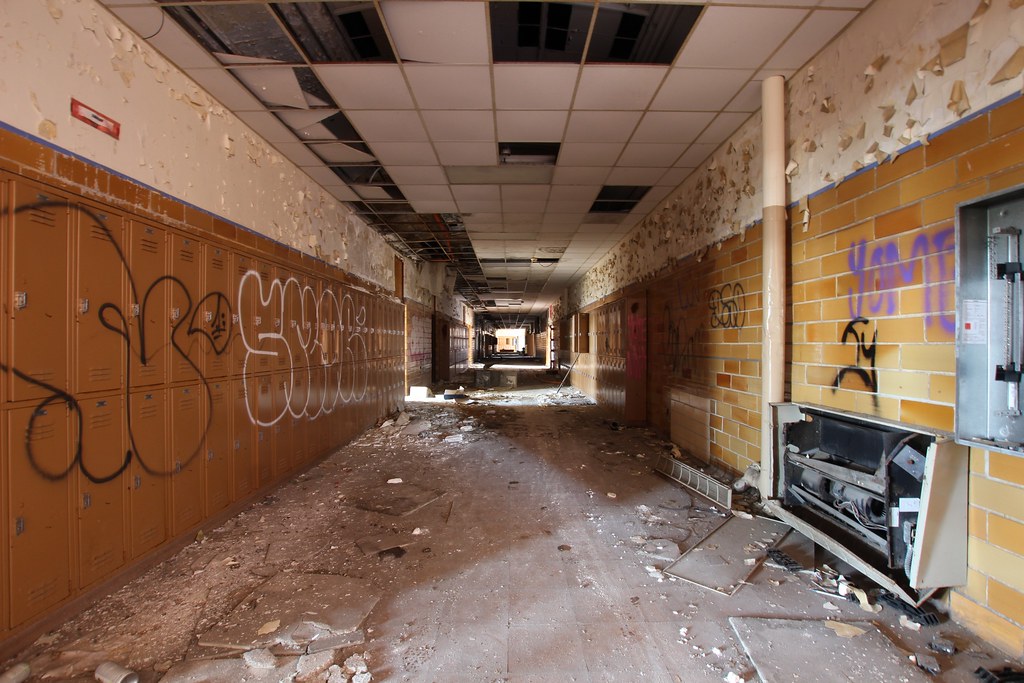 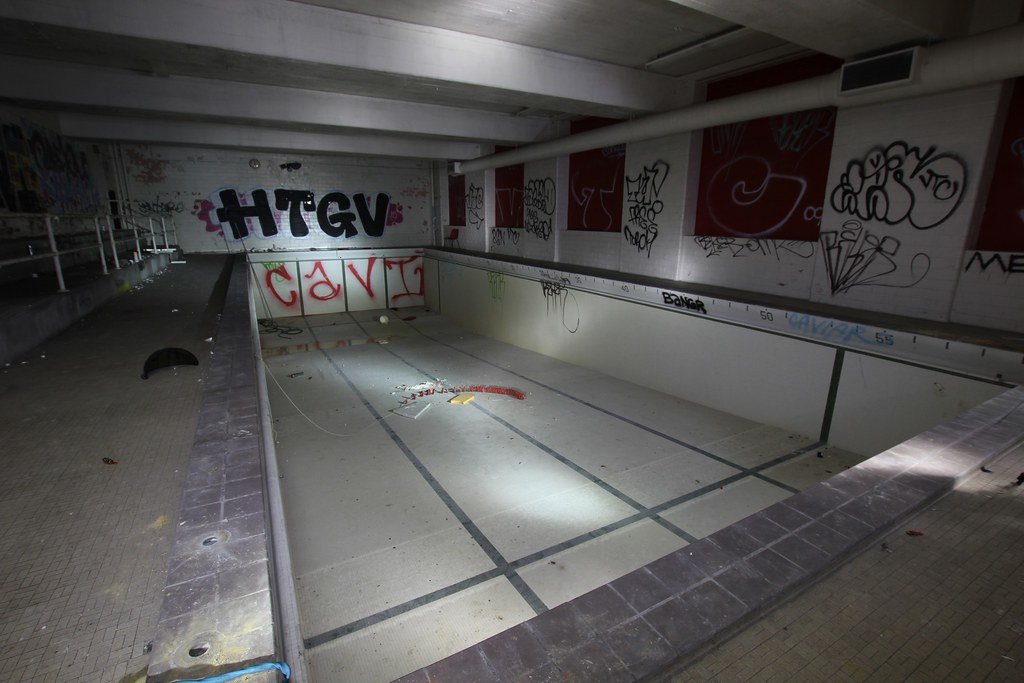 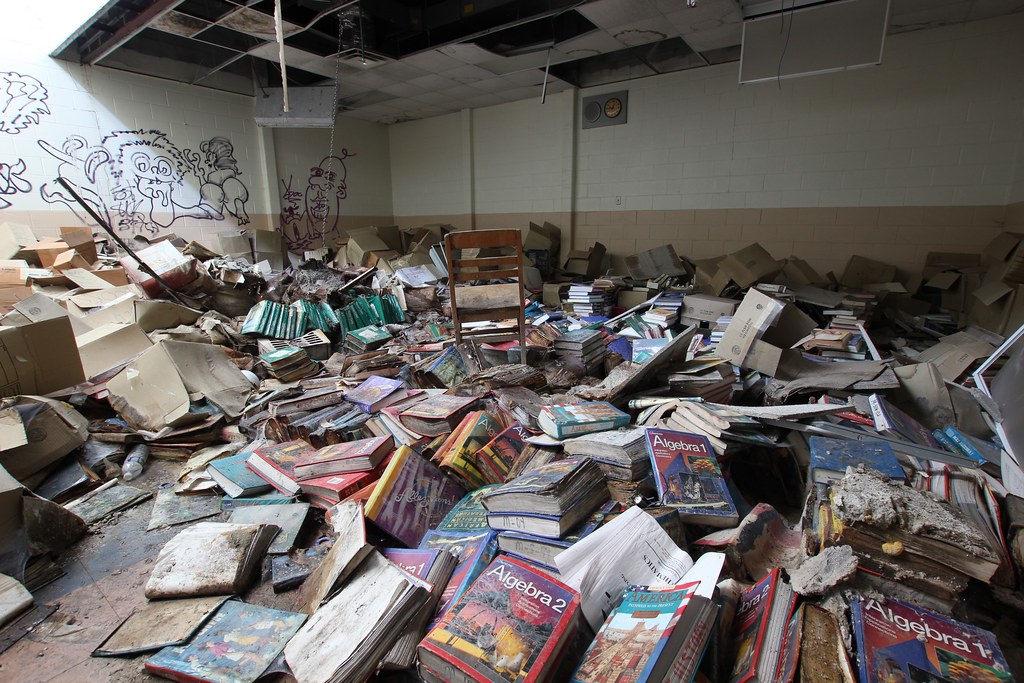 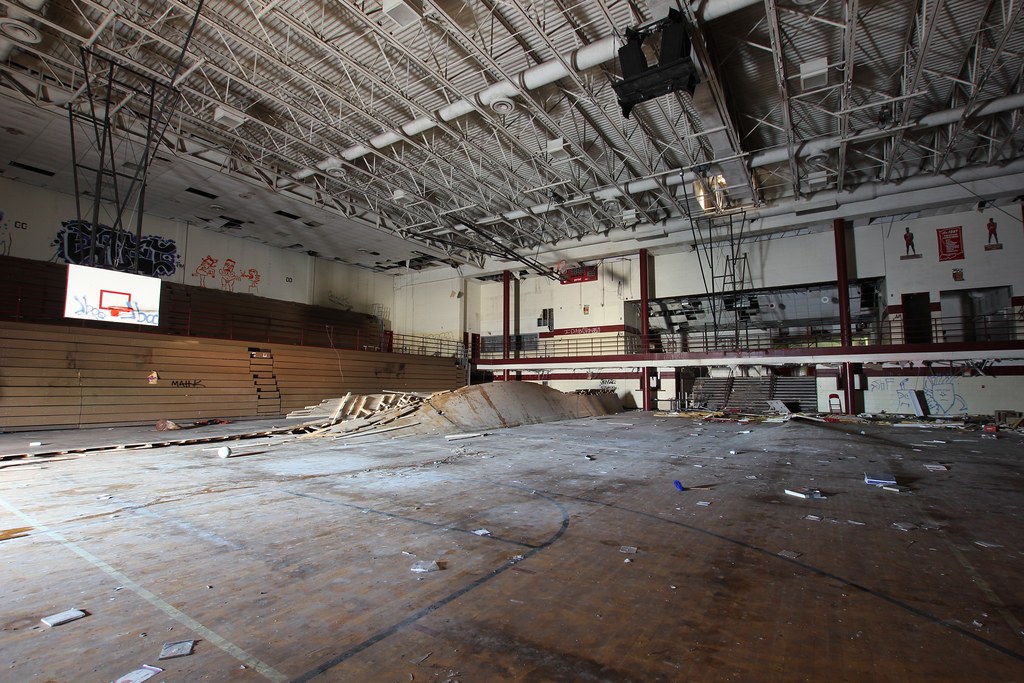 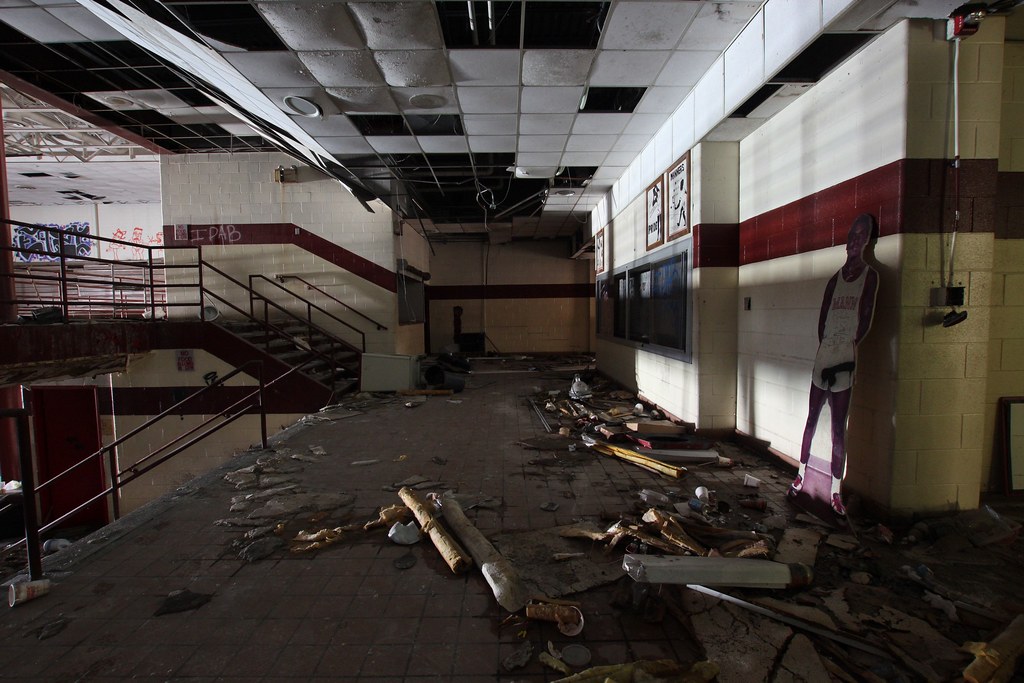 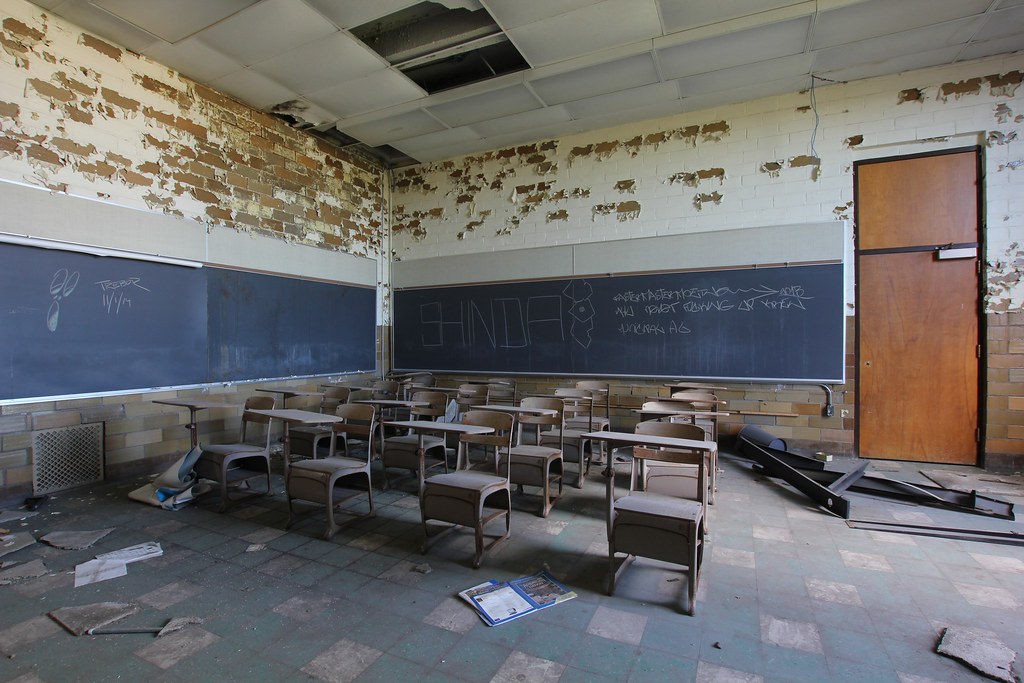 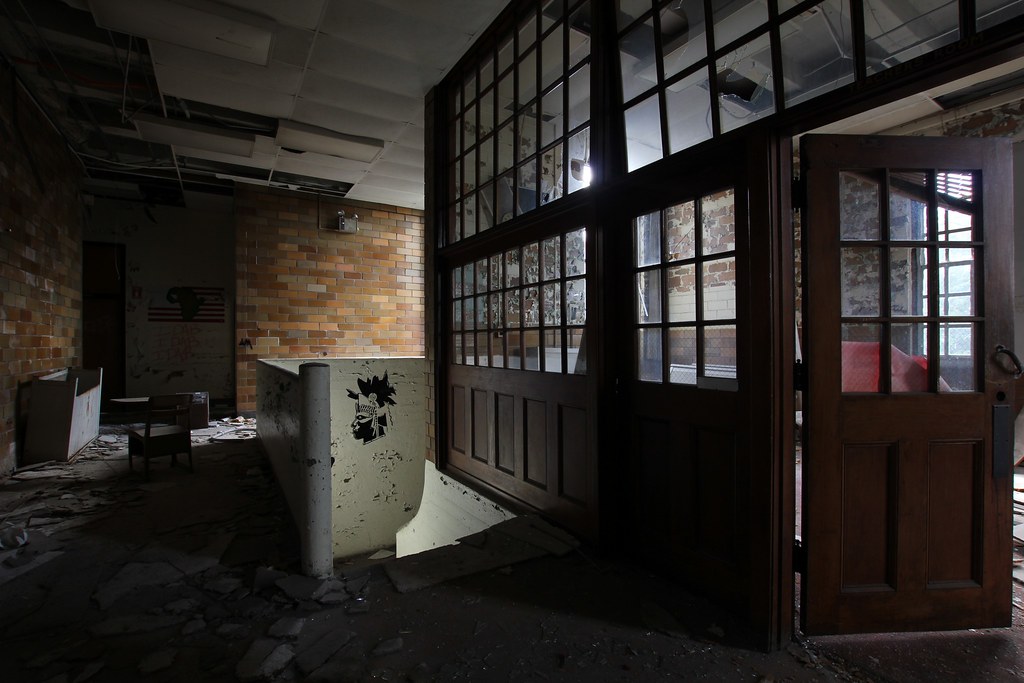 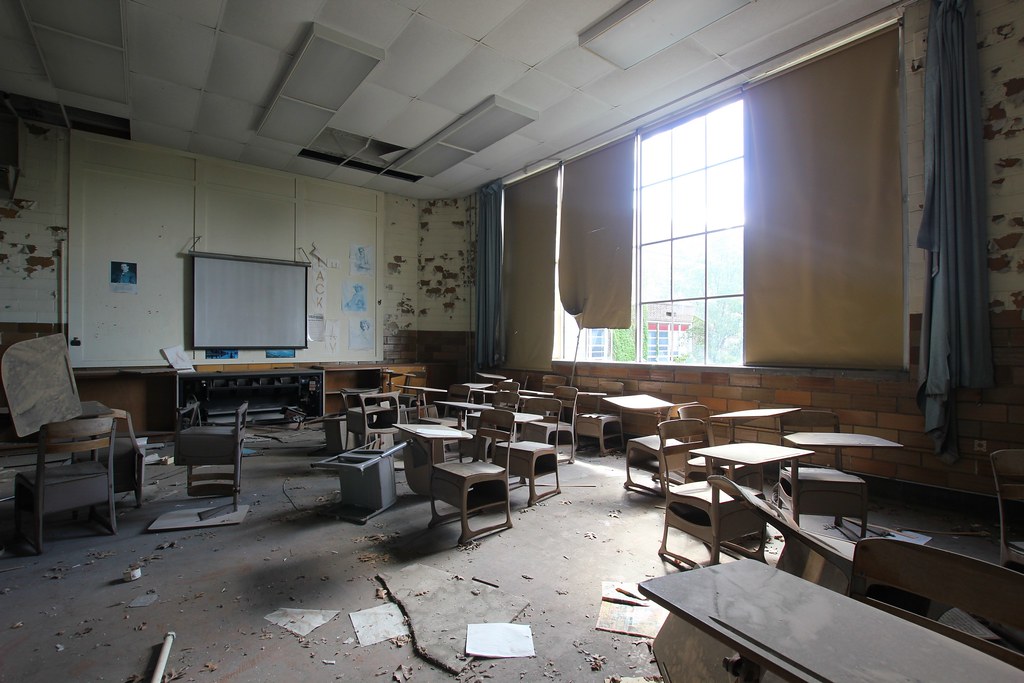 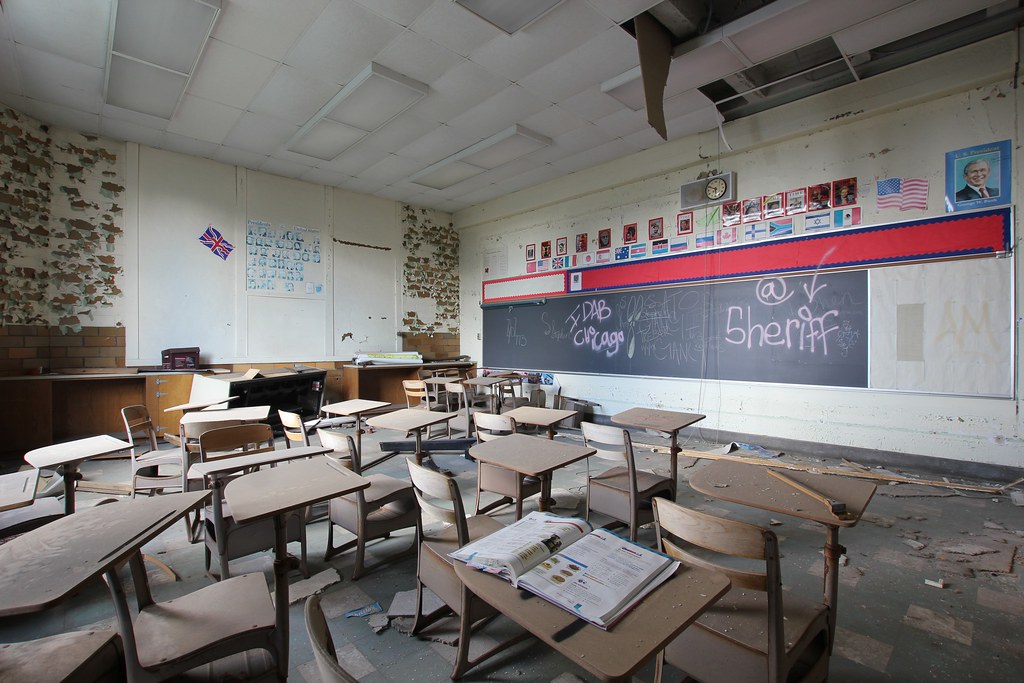 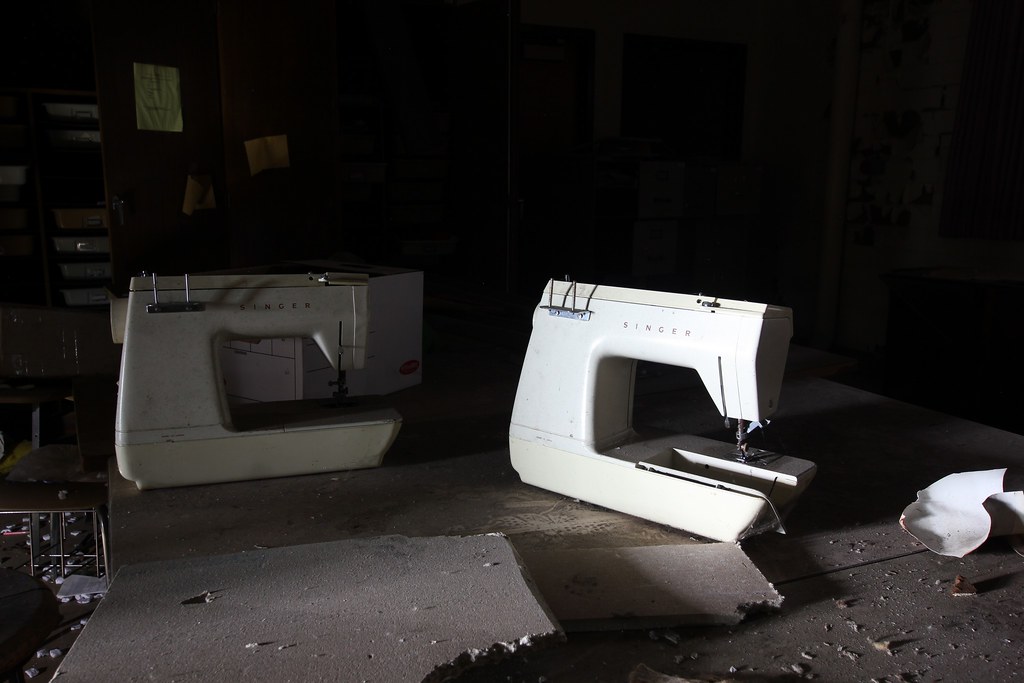 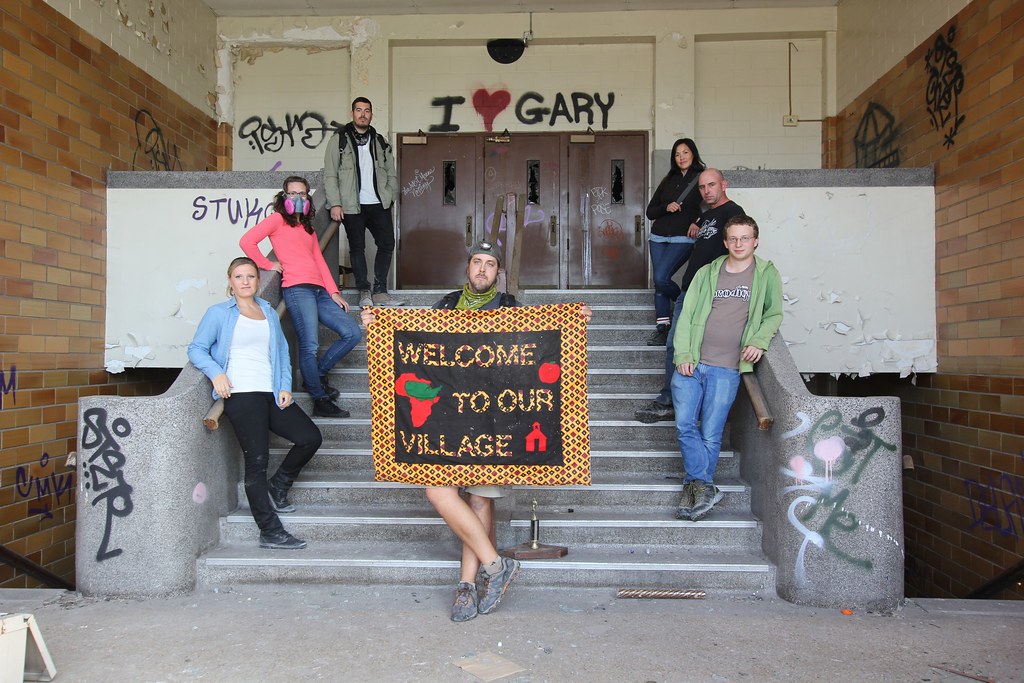 Love it, and love your text too. You're reports are awesome because your interest and passion for Americana is so strong.

Wow! Everything is on a bigger scale in the States. Fantastic set there (again) Mookster...

That is good, the shot of the rifle shooting trophy covered in spider webs was my favourite, Many Thanks

krela said:
Love it, and love your text too. You're reports are awesome because your interest and passion for Americana is so strong.
Click to expand...

I always knew I was a closet American

It didn't disappoint despite how trashed it is, I'd happily go back. Although it does make you think when you read news reports on the stabbing of two people in that auditorium not so long ago. Still, at least it wasn't the totally ruined school not too far from this one that the body of a murdered teenage girl was found in earlier this year...
F

What a beauty,Thanks for sharing.

Awesome timing! Were you not tempted to give some old the old vets' a tour?
Fantastic write up and even better photos. Thanks for sharing