Came across this amazing abandoned theme park this week. Such a hidden gem and completely untouched. 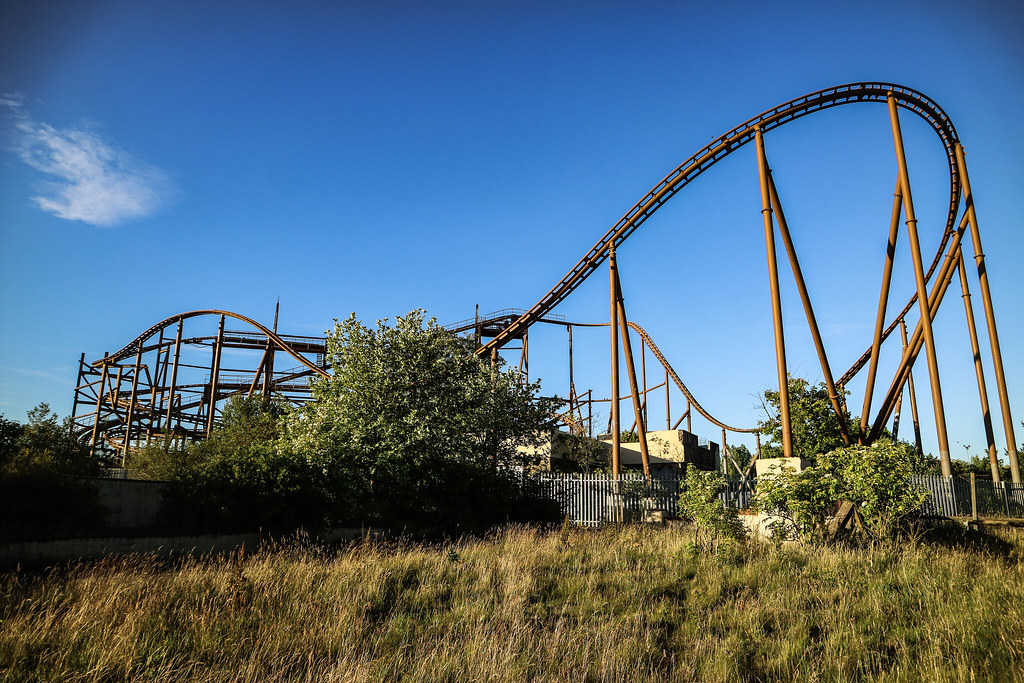 Screw the rest of this place, here's some history of the coaster:

Knightmare is a Schwarzkopf/Zierer custom roller coaster at the now defunct Camelot Theme Park in Chorley, Lancashire, United Kingdom. It was originally built in 1987 for a theme park in Kobe, Japan called Portopialand (now defunct) under the name BMRX'/'Bavarian Mountain Railroad, and was a dark indoor ride with a huge mountain themed structure surrounding it. After Portopialand closed in 2005, the roller coaster was acquired by Camelot theme park, and was dismantled and shipped to the United Kingdom. It cost the park £3 million to build the roller coaster. The track and trains arrived at Camelot at the end of 2006, without the mountain structure that originally enclosed it. At the beginning of 2007, the reconstruction began, with the ride finally opening to the public in the summer of 2007 as Knightmare.

The coaster originally featured five different coloured trains. When relaunched at Camelot, the park refurbished three of the five trains. Some of the steam train theming was removed (such as the funnel and headlights) from the front of the train. The three trains were painted differently with one being partly maroon, one partly purple and the other partly green. The other two trains were placed in storage at the park. Each train had a capacity of 14 persons, and the ride had a minimum height restriction of 1.3 metres. The ride takes the train up a semi spiral chain lift to its tallest point at 80 feet, then drops the train into an overbanked turn. The ride then takes you through various sharp turns, multiple helixes and a near vertical bend (nicknamed "the psycho drop") halfway through the ride where you experience almost 5G, reaching speeds of about 40 mph. Knightmare was arguably one of the most intense rollercoasters in the United Kingdom.

Seen as it's dumb close to me, I've been waiting for the right time to do this. Knowing the security are pretty harmless, I didn't care to be caught, I just wanted to be up there as long as possible to enjoy it and film it comfortably.

After I caught whiff that it's a definite go I turned up the following day to finally do it at sunset. However our sunset plans were obstructed when we were suddenly called down once we were up. I would've took some shots of the station but we were worried that we had tripped a motion sensor so we quickly moved through it and began the ascent. 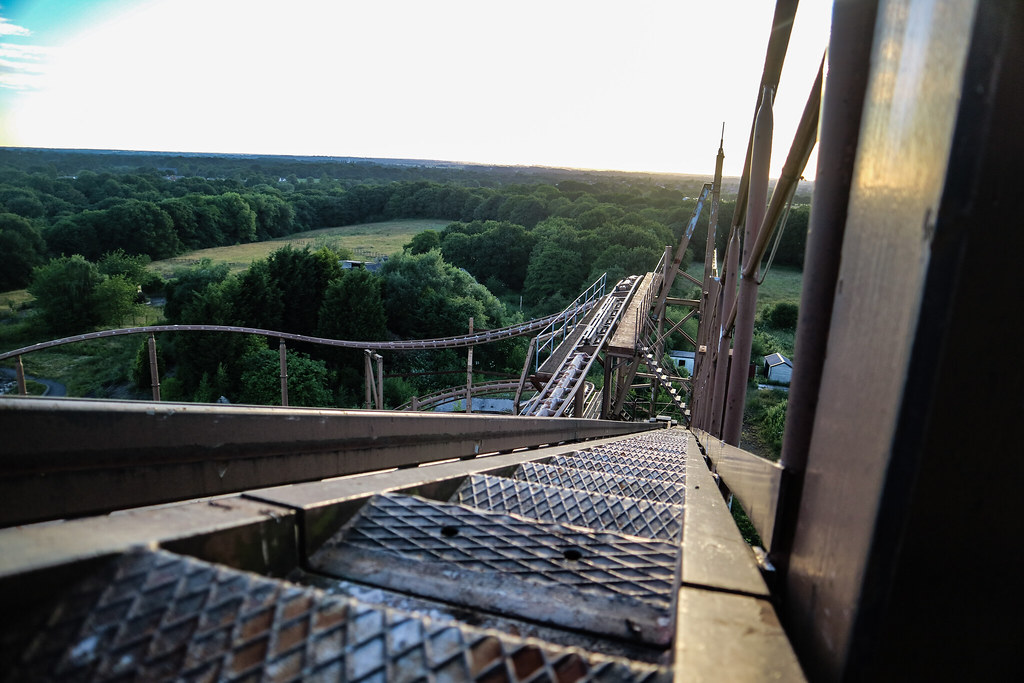 Looking down at one of the many helixes. 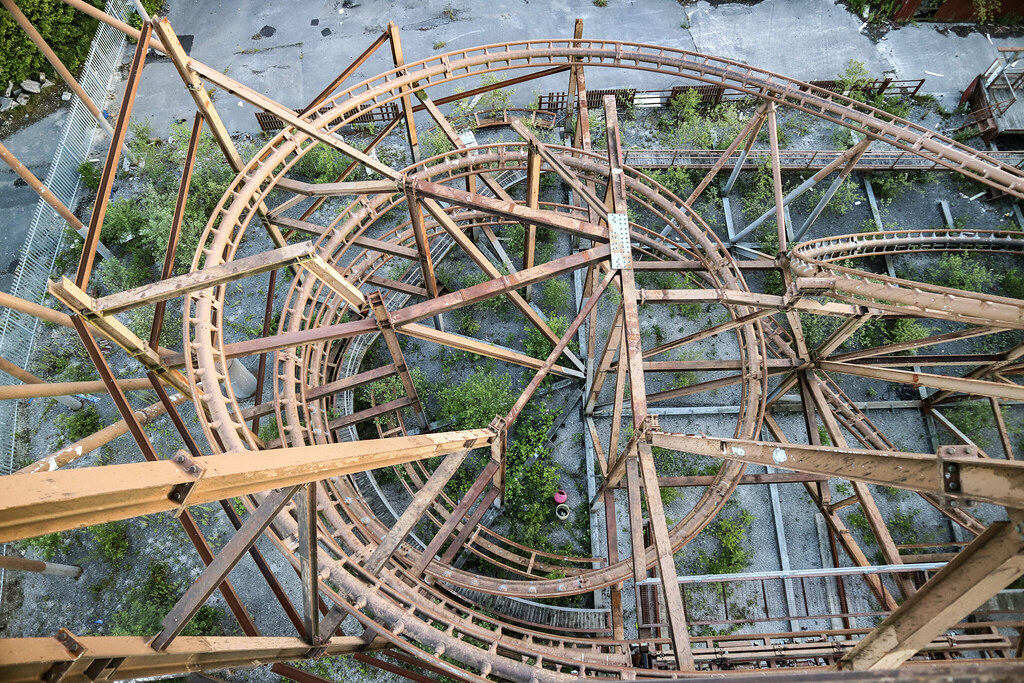 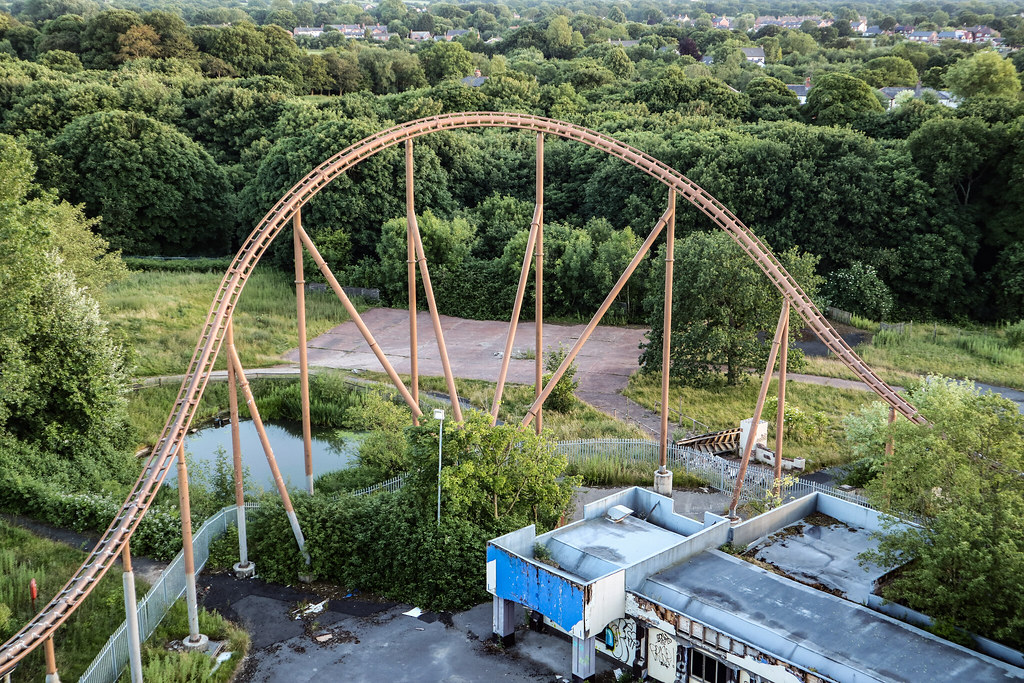 Don't know why this one is so vibrant. 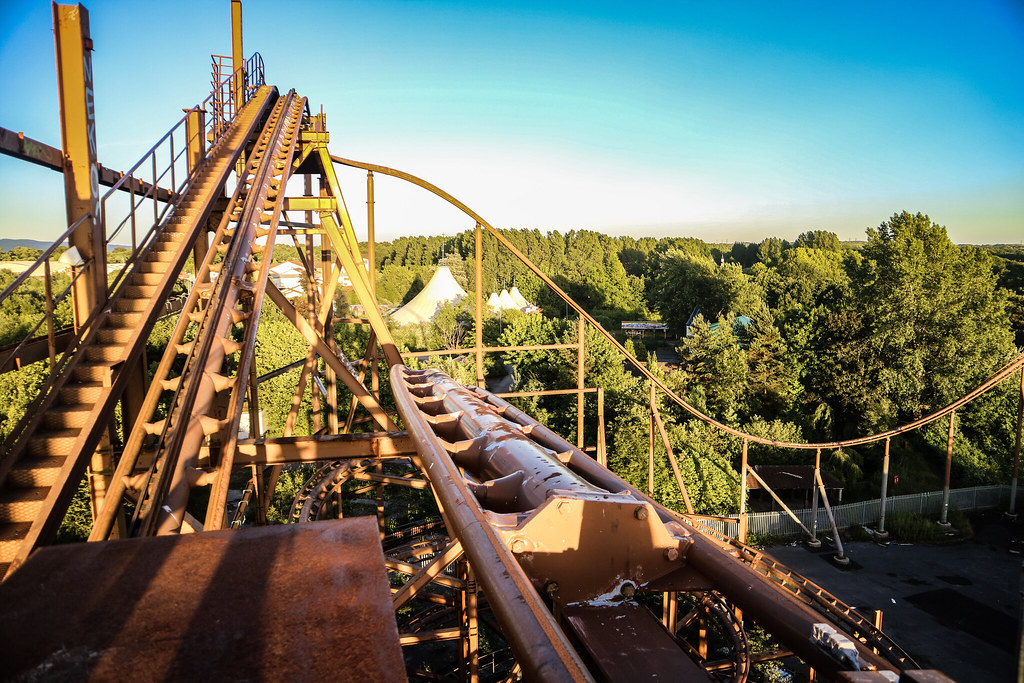 ...compared to this one. 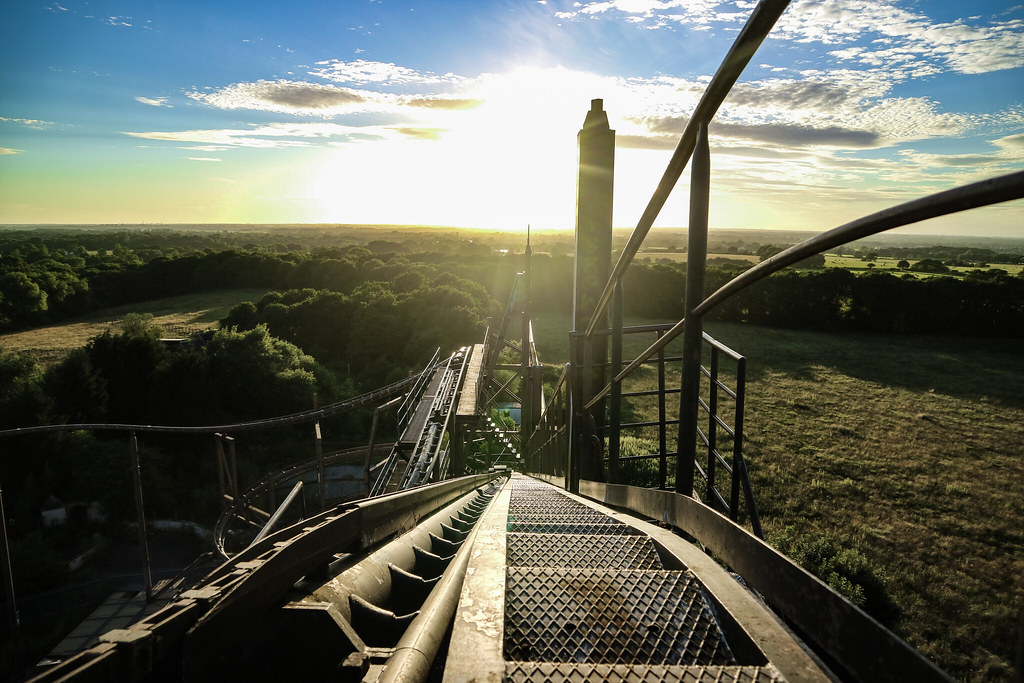 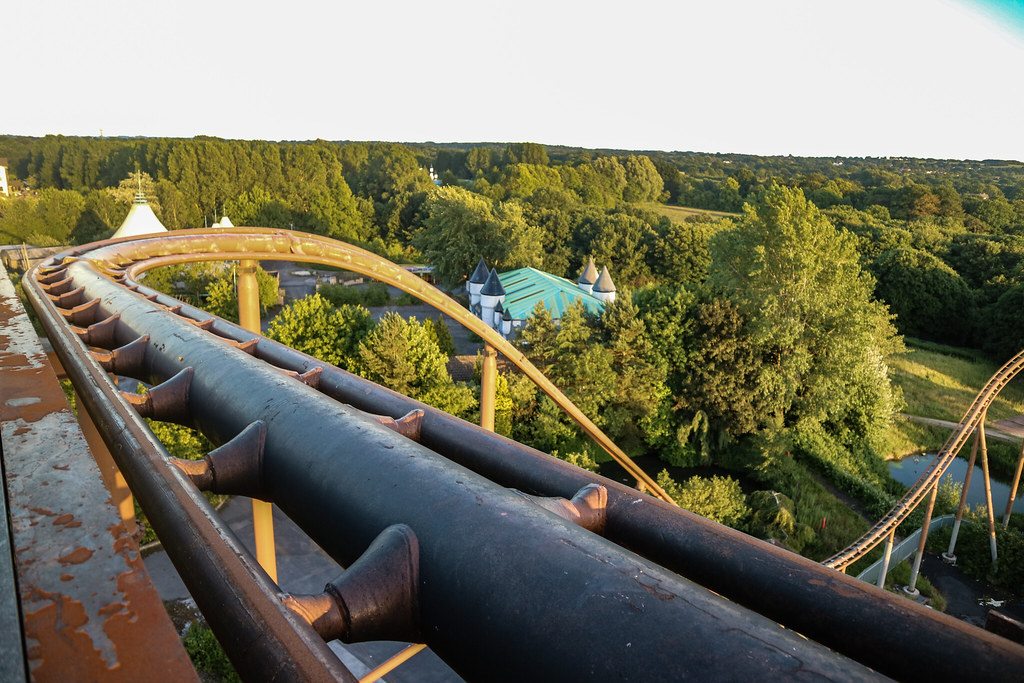 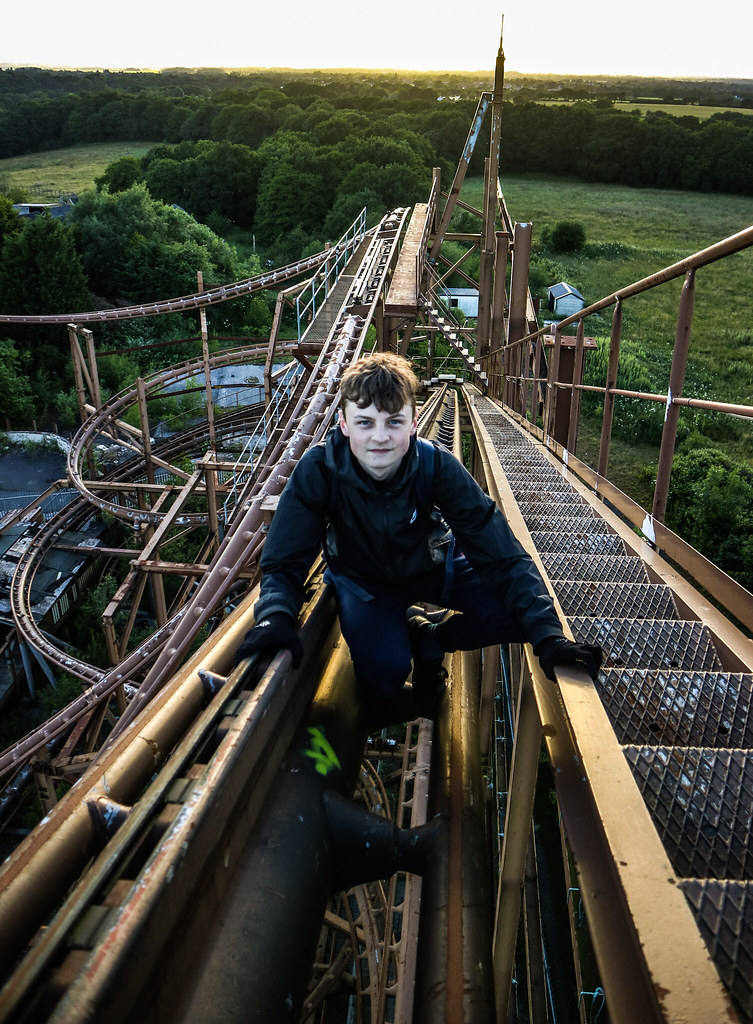 Apologies for the pictures, we were pretty rushed but that's still no excuse ...

There you have it. You can also check out the documentary styled video which I think shows the site better personally:

It looks like its still in good condition. Just needs a lick of paint and a few cars.

WoW the Team done good, must have bin fun clambering over that, I hate each and all of you but I like you're style, Thanks

Are you really trying to claim this as a first?? People have been up and down since 2009.

Nice set of shots.hardly a hidden one though.its one of the most visited places ever and the prime candidate for "You would not believe what we found" YouTube videos..it's,been in the press more times than Donald trump

Nice. I thought this place was, almost, impossible to enter.
Great Photos!

I think there was a bit of joshing going on with the commentary here ;-)

Yeah there is some good pics there, I think it’s all about how much u can take before u get caught in there lol

HughieD said:
I think there was a bit of joshing going on with the commentary here ;-)
Click to expand...

Ha ha hughie you are prob right.you just see so much like this about Camelot
U

Haha I'm only messing man
U

only joking mate haha I know how badly this place has been shredded over the years seen as it's right near me.

Really cool high up shots you have captured there, I haven't got the stomach for that but bloody wish I had, lovely light too, the vibrant one is with the sun behind you and the not so vibrant one is shooting into the sun

Absolutley love this....... I remember it as a child so its upsetting to see it so unused. Great work though when your next in the area give us a shout