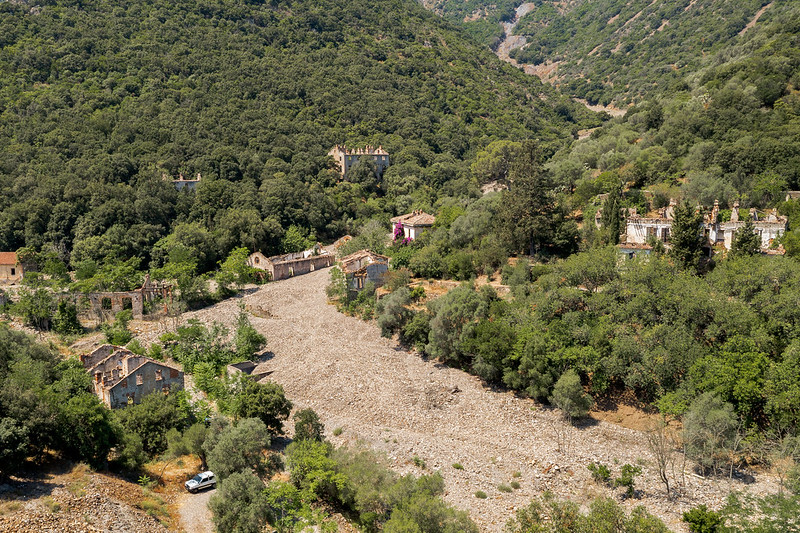 
Only ruins are left today. What you see are the eerie remains of a once thriving mining town. People from all over came here for work, and to search the mountains for veins of silver. But their prosperity was doomed to end, and their homes were built to be swallowed. In June 2021, we traveled to Sardinia, Italy's second-largest island, to explore locations off the beaten track. 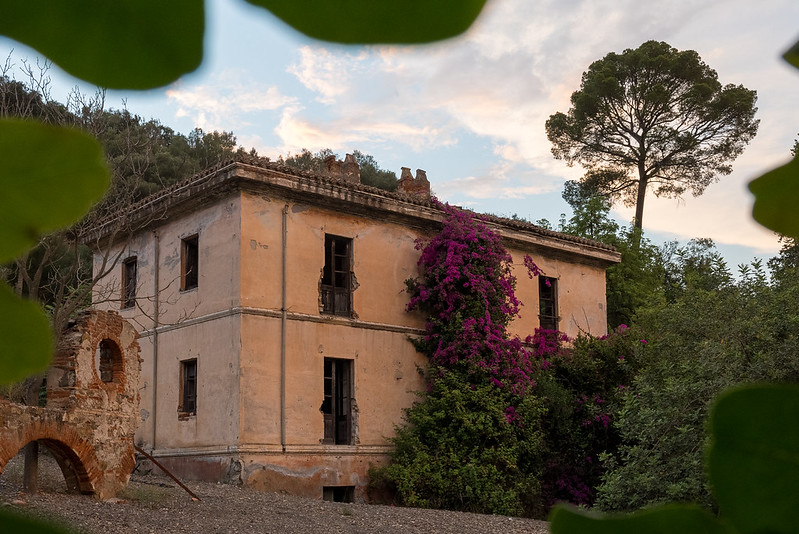 Camping by the ruins, with a bonfire to keep us warm, and tasty dinner to keep us fed. Tomorrow, we set out to learn the story of this place - but tonight, we enjoy the ambiance. 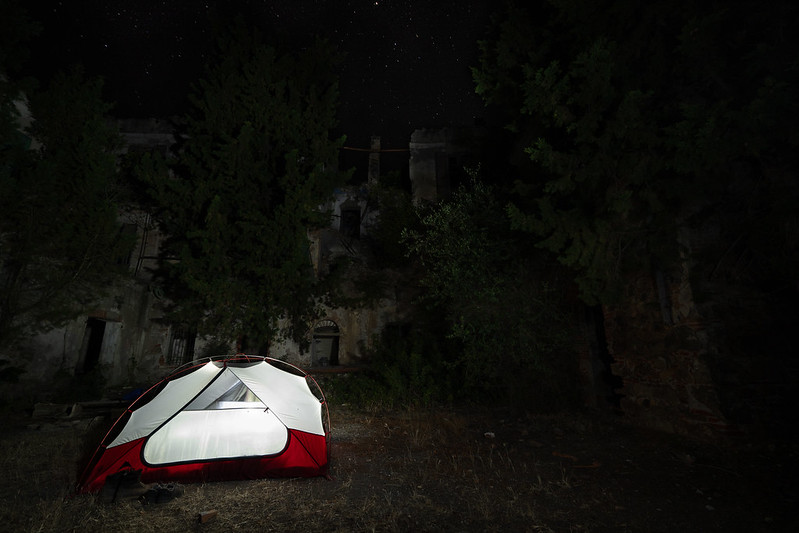 From the second half of the nineteenth century, people were digging in these ranges. They were looking for lead but also silver. About ten mining sites made up this so-called silver trail. Today, only ruins are left - so, it is hard to imagine, but this used to be a very modern town back in the day. They had power, a telephone line, a hospital, several workshops, and so on. Given that this place was built in the mid-1800s, all of this can be seen as a real luxury. From that time, only the foundation walls remain today. The structures still standing are in critical condition and close to collapse. 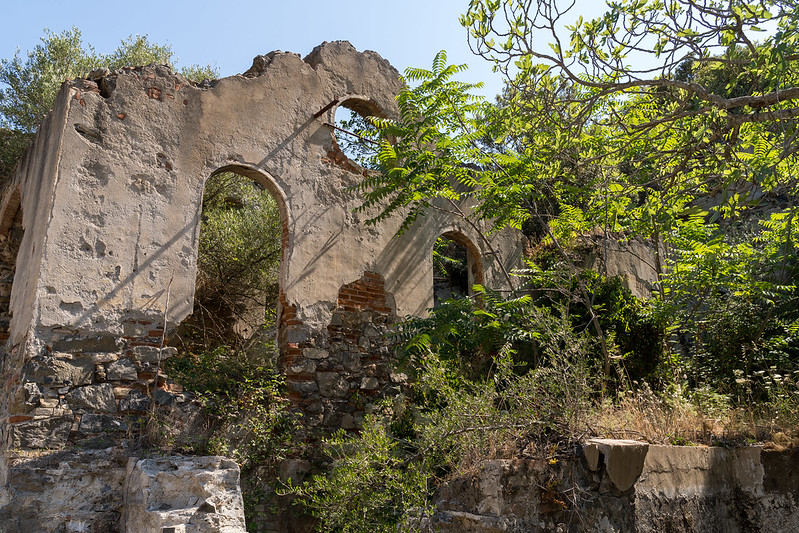 This mining town was built in the 1860s, and at one point, it was home to 900 miners from all over the island. Since ancient times, Sardinia's underground was known for its lead and silver deposits. Romans started mining the island to have supplies for construction, or they used the silver for minting their coins. But these natural resources are limited, so mining is always just a temporary process. Over time, veins were drying out, and digging for new deposits became more and more costly and less fertile. This was at the beginning of the 20th century when international competition lowered the price of silver. Due to economic losses, the mining company closed its operation in 1935. There was no work anymore and they were in the middle of nowhere, so the former mining center of the region then quickly became a ghost town. Only empty houses were left behind. What remains today is just ruins. 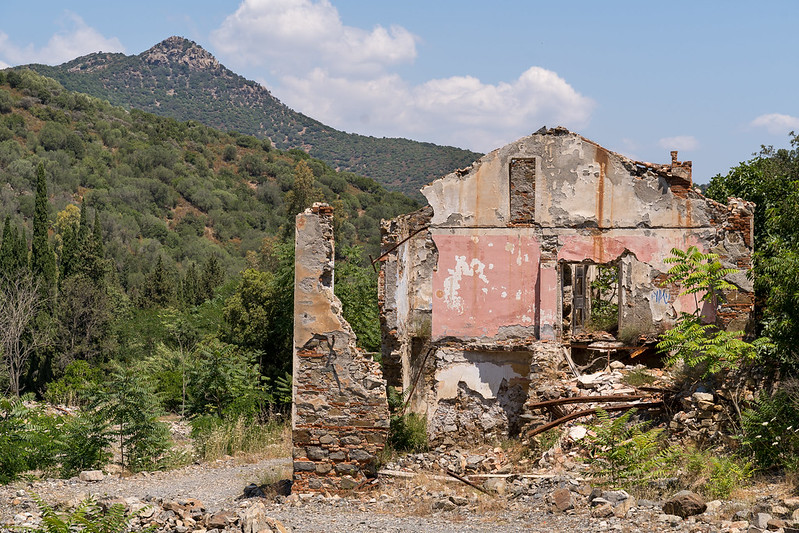 After the mining company left, this became a no-man's-land. In the following years, bandits, adventurists, or just desperate people came to try their luck in the abandoned tunnels. The miners before them left behind a massive underground system that stretches 18 kilometers on a dozen floors. These tunnels go 500 meters below ground level. And indeed, some lucky ones found chunks of silver - while others paid with their lives. 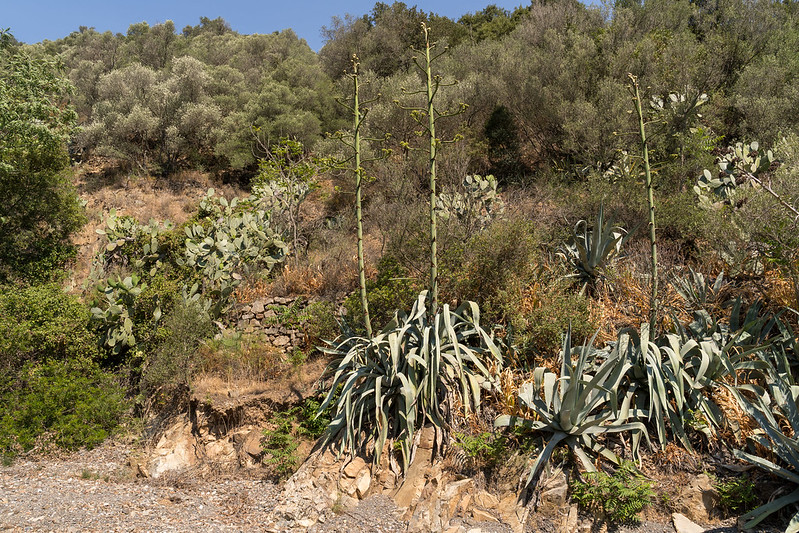 What was once taken by human hand, and owned for over a century, belongs now to flora and fauna again. In the absence of man, nature thrives. We are deeply impressed by the richness of species and lifeforms we come across by exploring the old mining town. 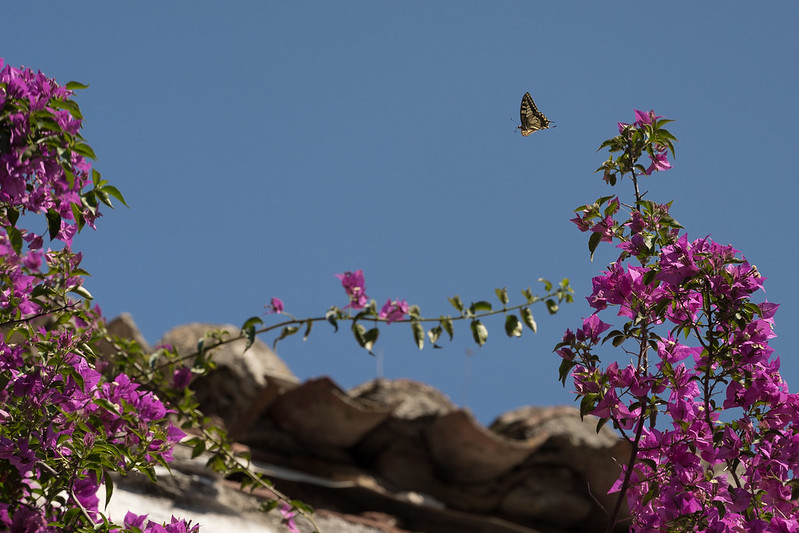 There are a couple dozen buildings stretched over several hundred meters in these mountains, and only one of them has stood the test of time so far: It is the old villa of the mining director. But here too, time left its marks - and still, you can get a glimpse of a bygone era. These ornamental paintings have a curious story: During World War One, a group of Austrian prisoners of war was brought to the mining town. One of them was a painter in his civilian life. During the term of imprisonment, he then decorated the technical offices with painted frescoes. Despite years of exposure to the elements, the art still retains its vibrant colors to this day. 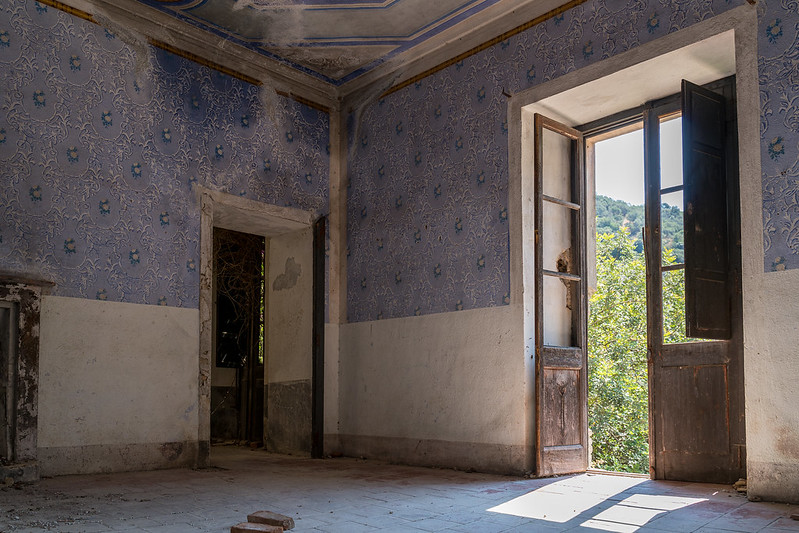 Surrounded by the mountain's peaceful silence, this mining village disappears more and more each year. At one point, people from all over the island came here to search for prosperity - and yet today, barely any Sardinians know this site anymore. Only the locals remember. On our trip to the hinterland, we just explored parts of the ghost town. There are many more structures hidden in the hills, together with the old mining tunnels. Luckily, we met some locals who showed us around and shared stories about this place you would never find on the internet. And yet, this is just one of the many remote areas of the island... 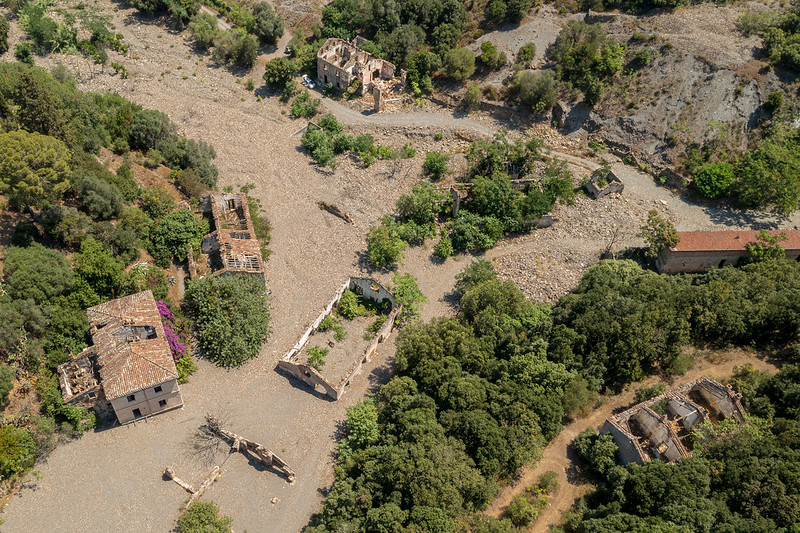 Join us on our journey to Sardinia in this urbex video on YouTube:

Hard to believe that place like that exist still

Brilliant, thanks for posting up
H

In the late 1970s I was travelling in New Zealand and Australia. I came across several old mining towns and encampments. I was also on the survey of the highly successful Argyle diamond mine in Western Australia. One day it too will be a relic. Whilst tramping in New Zealand I came across the remains of a gold mine, with its derelect timber buildings. I wrote this about what I found:

THE SHOTOVER CLAIM. New Zealand No 4.

Both New Zealand and Australia have long histories of mineral exploration. This piece is about a New Zealand gold mine.

(The name “Shotover Claim”, common in mine names in New Zealand, originated with the first find under a waterfall, the actual vein of gold-bearing quartz running through the boundary of the land agreed with the local Maoris to be opened up for mining. The boundary was moved to include the find in the mining claim.)

Near the town of Thames, in the North Island of New Zealand, there once operated a gold mine bearing the name, “The Shotover Claim”.
Discovered on the tenth of August 1867, it produced gold worth half a million pounds sterling.
A century later, and the area has largely gone back to nature.

In a valley stands a mine-house - clapperboard built, with a corrugated iron roof now turning up at the corners - like a week old take-away sandwich.
The floorboards rotten, broken; the walls torn out, or falling in; a remnant of paint peels off a remnant of decaying wood.
At one time, the two main rooms of the house looked out over a spacious, well-kept garden, one that sloped with the valley. Now, they are invaded by moss-draped apple trees, trees planted to shade the dwellers of the house as much as to produce their Granny Smiths, or Orange Pippins.
To the rear of the building, the lean-to kitchen and scullery have likewise surrendered to the passing of time - native bush climbs in through their unglazed windows, through their doorless doorways.

Blackberry bushes bear ripe fruit; the grapevine has a crop this year, sweet and succulent.
There’s a head of seed on a garlic stalk, and the hydrangeas are a catalogue picture of purple and pink.
Delicate, long petalled, on three foot wands leaping from long bladed leaves of green, some red flower matches the colour, but not the hue, of the berries clustered - like corn on the cob - at the head of span-high short stubby stalks.
Grasses and shrubs are everywhere.

Further down the valley stand the fronds of giant ferns, while fir trees overtop all.
The ever-chattering cicadas, and the plaintive tweeting of a lonely bird are the only true sounds of the bush.
For, far below, motor traffic powers along the coastal tar seal.
And a tractor works a distant paddock.

Back up at the house, where the meat safe lies in the wilderness that was the garden, and the route to the outside lavatory is now camouflaged and obstacle strewn - like the paths to the walled-up mine adits themselves - all is at peace.

There will be no new strike this year.

I've just watched the video, and can only say well done with producing such a good visual and informative record of the place. The force of the rain that brought down all the stone tailings must have been tremendous. The lizard shots reminded me of what I saw in Africa, especially in Rhodesia/Zimbabwe early in the morning before they were warmed by the sun. The ease of obtaining video (including the drone sequences) compared to using cine film (which I used to do) is remarkable. And the definition is so high. Thanks again.