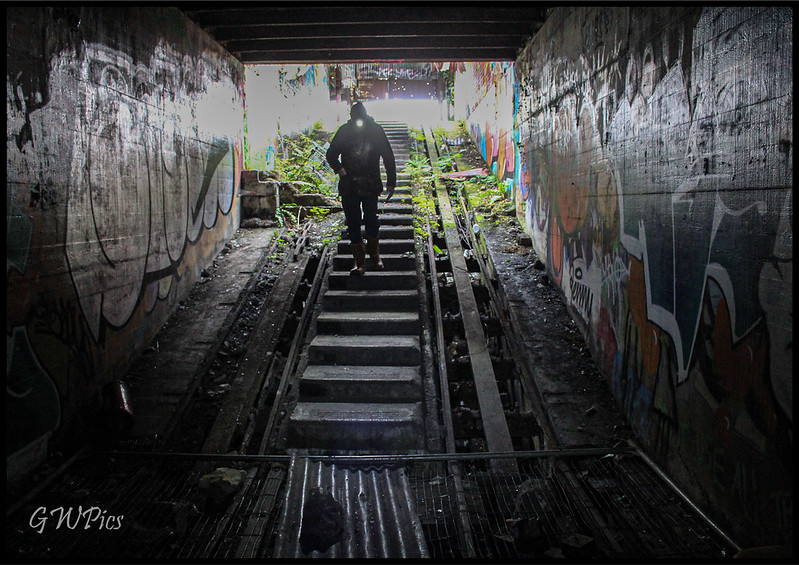 Another one from about 6yr ago (when I couldn't really take pics) , this well known place.
History nicked from Sub Brit

Monkton Farleigh ammunition depot utilised an old stone quarry below a plateau some 450 feet above the valley floor in which ran the main line railway that was its principal source of supply. Before the depot could be commissioned, an efficient means was need to bring in ammunition from the railway at Farleigh Down Sidings. The sidings were just over a mile from the depot as the crow flies but more than four miles by road along steep and tortuous country lanes 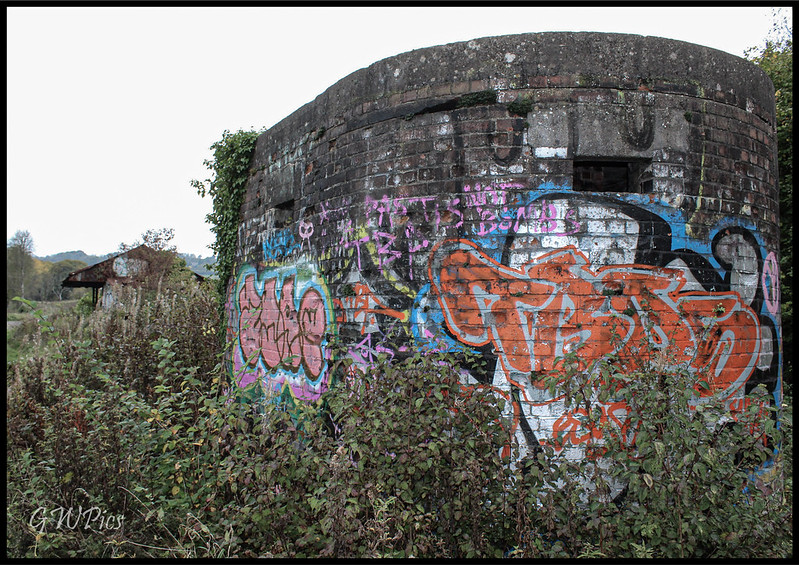 In November 1937 the Great Western Railway were contracted to lay the sidings and build a 1000 foot long raised loading platform complete with a narrow gauge track to carry the ammunition wagons. Outline plans had already been prepared to drive a mile long tunnel from the heart of the workings terminating in an underground sorting yard built beneath the sidings in the valley below.
The tunnel was designed to handle 1000 tons of ammunition daily. This was not scheduled for completion until 1941.
In the meantime work started on a 2000 yard mono-cable aerial ropeway which was to stretch in a straight line from the sidings, up over the brow of Farleigh Down to a transfer station near No. 20 District loading platform at the western end of the depot allowing the depot to be brought in to use while work on the tunnel continued 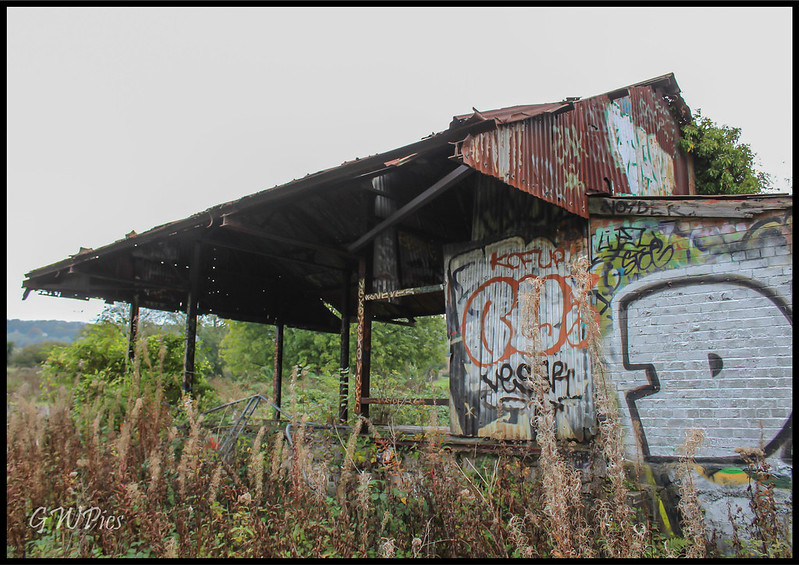 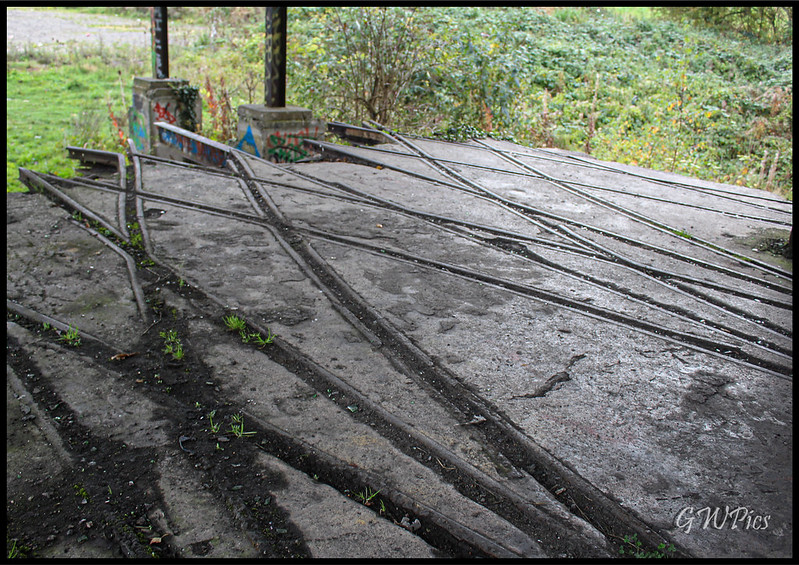 The tunnel to the railway sidings at Shockerwick was a key feature of Monkton Farleigh mine, offering a secure route, invisible to aerial reconnaissance. The tunnel terminated at a loading platform thirty feet below ground level at a right angle to the main-line platform. The design was finalized in December, 1938, and by the end of the following year the upper terminus was completed. Boring the one-and-a-quarter-mile-long tunnel was a specialist task completed under contract by the Cementation Company. The tunnel runs from quarry floor level near Main West to the underground loading platform near the main line railway at a constant gradient of 1:81/2. Deep tunneling was required for the top half of the route whilst the lower half is at or just below ground level and was constructed by the ‘cut and cover’ method. A depth of 180 feet was reached near the edge of the Farleigh Down escarpment.
Work on the entire length of the tunnel started simultaneously and to facilitate this, two deep shafts were sunk at 800 foot intervals. A further shallow opening was made just below the Kingsdown Road from which point a broad trench was opened out across the fields in preparation for construction of the ‘cut and cover’ section. 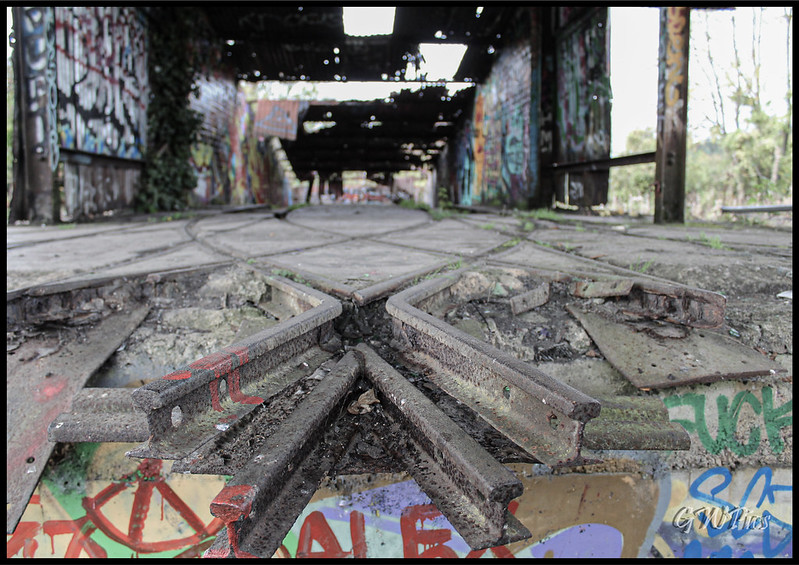 Drilling equipment and headgear was erected at the site of the two deep shafts from where tunneling continued until the summer of 1940. Waste from the top shaft was carried by rail across the village road and dumped in the old quarries. Waste from the other shaft in Ashley Woods was distributed among the trees where the dense overgrowth provided adequate camouflage.
Lining the rough excavation started in July and took a further year to finish. The upper half of the seven-foot-wide tunnel was completed with a semi-circular brick-arched roof having a maximum headroom of 69". On the lower section of the tunnel a much simpler, eight-foot-square reinforced concrete box-section was employed, built in a trench of varying depth in order to maintain the specified gradient.
At some points, depending upon the undulation of the land, the box was completely buried, but for much of its length it was hardly below ground at all and had to be disguised by forming a gently sloping earth bank over it.
By May, 1941, almost half of the length was completed and the floor and side walls of the remainder were in place, as were the main walls of the underground sorting yard.
A thirty-foot deep slope-shaft was sunk at the west end of the loading platform to communicate with the underground sorting yard.
Trucks were controlled on the slope by a Head-Wrightson tram creeper-retarder, the mechanism of which consisted of two heavy-duty roller-chains driven by vertical motorized sprockets. Each link carried a steel ‘dog’ which projected upwards and engaged an axle of any truck pushed over it, and thus either propelled it to the surface or lowered it slowly underground. 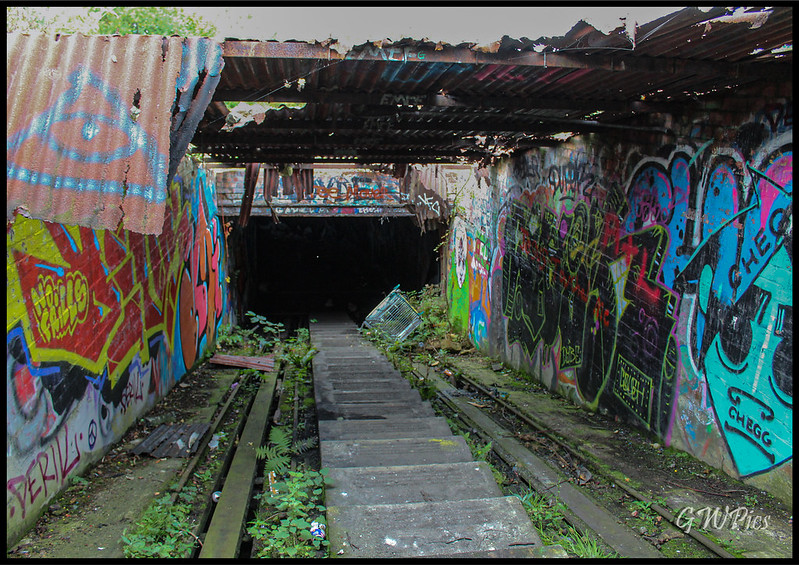 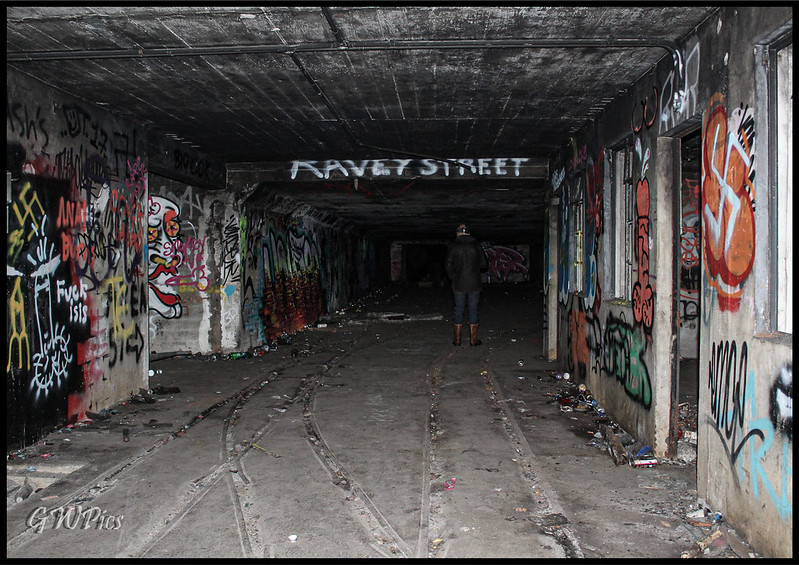 In November, 1941, engineers from Richard Sutcliffe Ltd started assembling the tunnel conveyors, completing the task by the following April. Because of the heavy load carried against the gradient when, on receipt, it was necessary to use two separate units running in tandem and linked by gravity rollers.
The upper conveyor was 2,171 feet long and the lower one 2,372 feet. Although the majority of the belts in the depot were twenty-six inches wide running at seventy-five feet per minute, those specified for the tunnel were heavy-duty type, using thirty-inch belts running at 350 feet per minute. Initially Sutcliffe’s suggested the best results would be obtained by spacing the belt support rollers at eighteen inch intervals throughout the length of the conveyor, but in practice this spacing caused certain types of ammunition boxes to bounce uncontrollably and fall off. Eventually it was found that the most satisfactory results were obtained by using a regular progression of roller spacing, from nine inches to three feet and back again, along the whole length of the belt. The tendency to bounce was further reduced by increasing the tension on the belt to three and a half times that for which the machine was designed, and by reducing the speed from 350 feet to 250 feet per minute. It was expected that these alterations would put an excessive load on the existing gearboxes and this proved to be the case. Within nine months the teeth of the large spur gears were worn wafer thin and the main drive shafts had collapsed twice in quick succession, putting the tunnel out of action for several days. 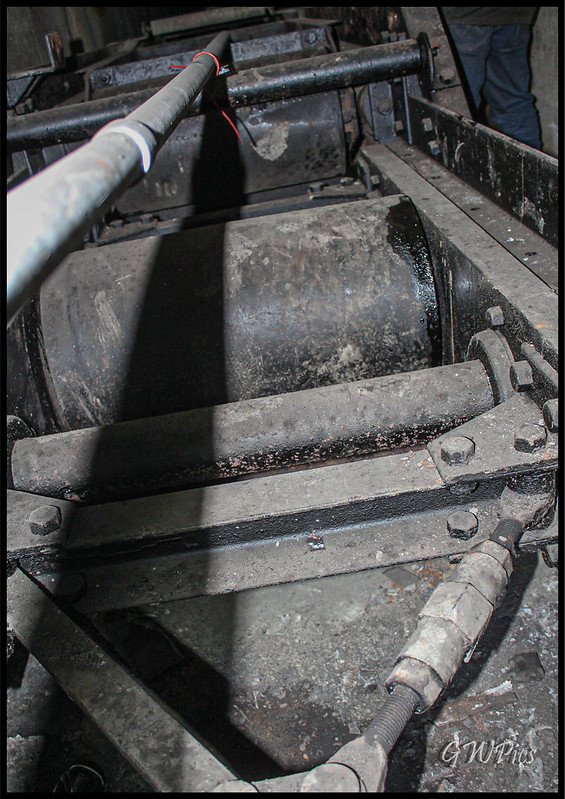 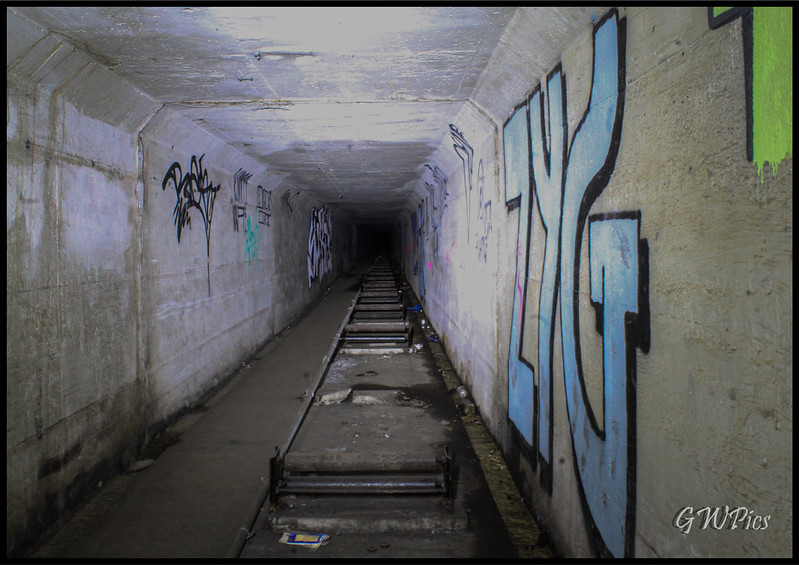 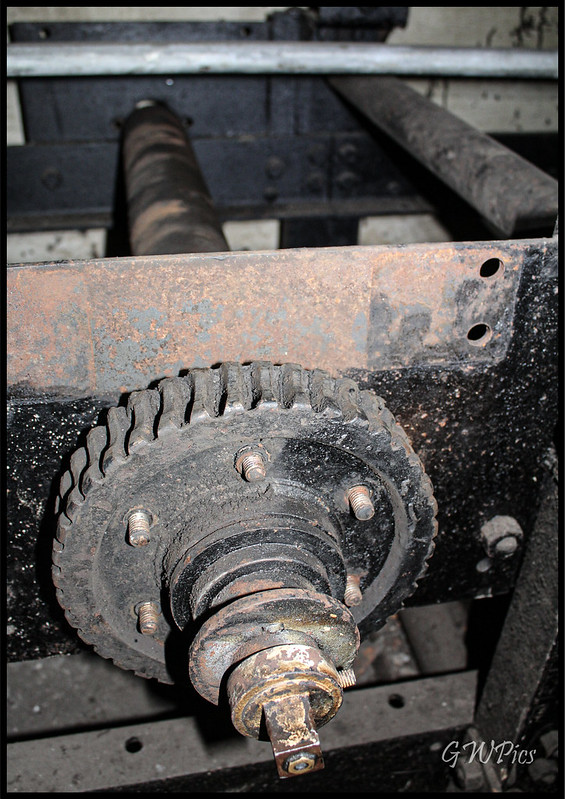 Great vigilance was required to ensure that correct spacing of the shells or boxes was maintained in order to prevent congestion at the top of the tunnel where the ammunition was transferred to the much slower belts in Main West corridor. Men were stationed at intervals along the conveyor charged with the unutterably boring task of keeping watch over the thousands of ammunition boxes as they trundled past -in the cold miserable gloom, checking that none slipped off or jammed.
Pulling an emergency stop wire attached to the side of the conveyor immediately stopped both belts simultaneously from any point in the tunnel by breaking the control circuits of the motors, which could then only be restarted from the switching station near Main West.
Spotters indicated that the belt was clear by flashing the tunnel lights, which were provided with strategically placed switches for this purpose.
Following the installation of conveyors in Main West a signal-box was built at the junction of Main West and the tunnel to control all the main haulage conveyors and the two tunnel belts.
When the tunnel was brought into use the aerial ropeway link to No.20 District was maintained intact as a standby in case of a failure of the tunnel belt. It was used for a while in January, 1944, following a breakdown of the Farleigh Down tram-creeper. Later, approaching D-day, the tunnel belt and overhead rope were used simultaneously for the enormous issues of ammunition required for the invasion of Europe. 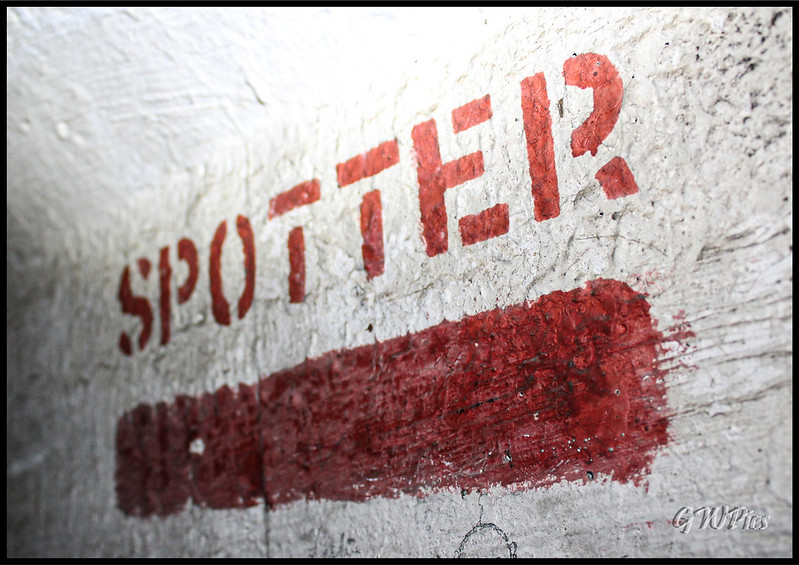 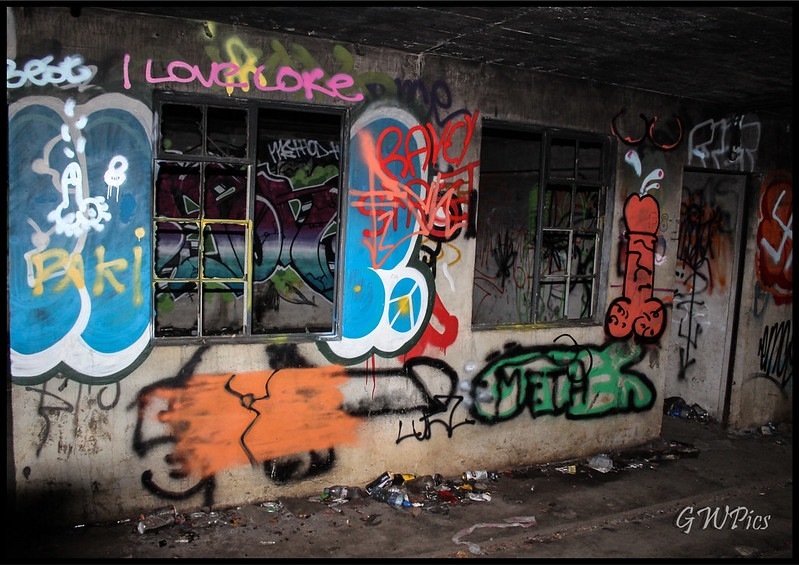 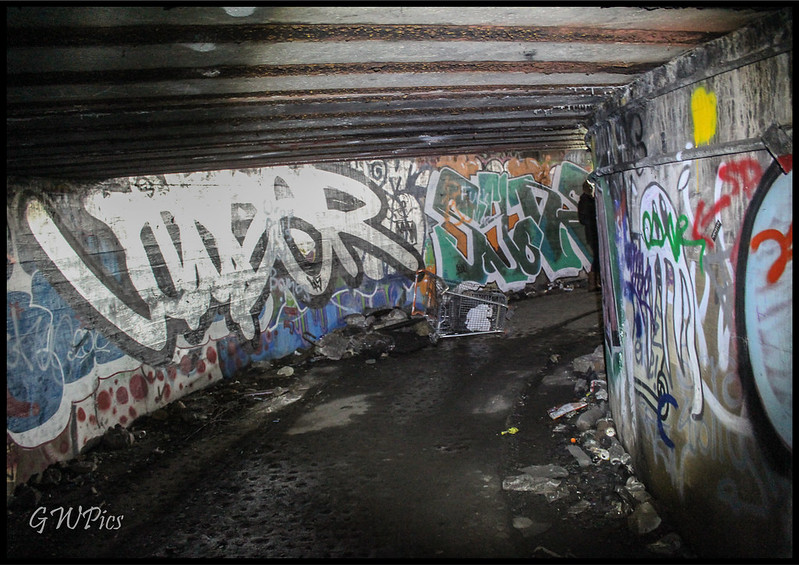 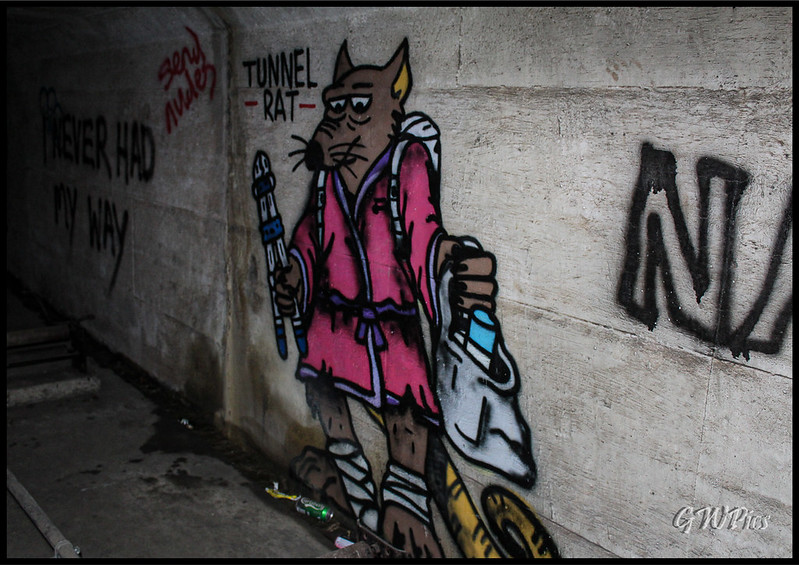 Thanks For Looking
P

Here are some ancient film based pictures of monkton in about 1978. Before the Artists arrived!

The large engine was a ex submarine diesel with pistons about a foot diameter, it provided power to the whole place. 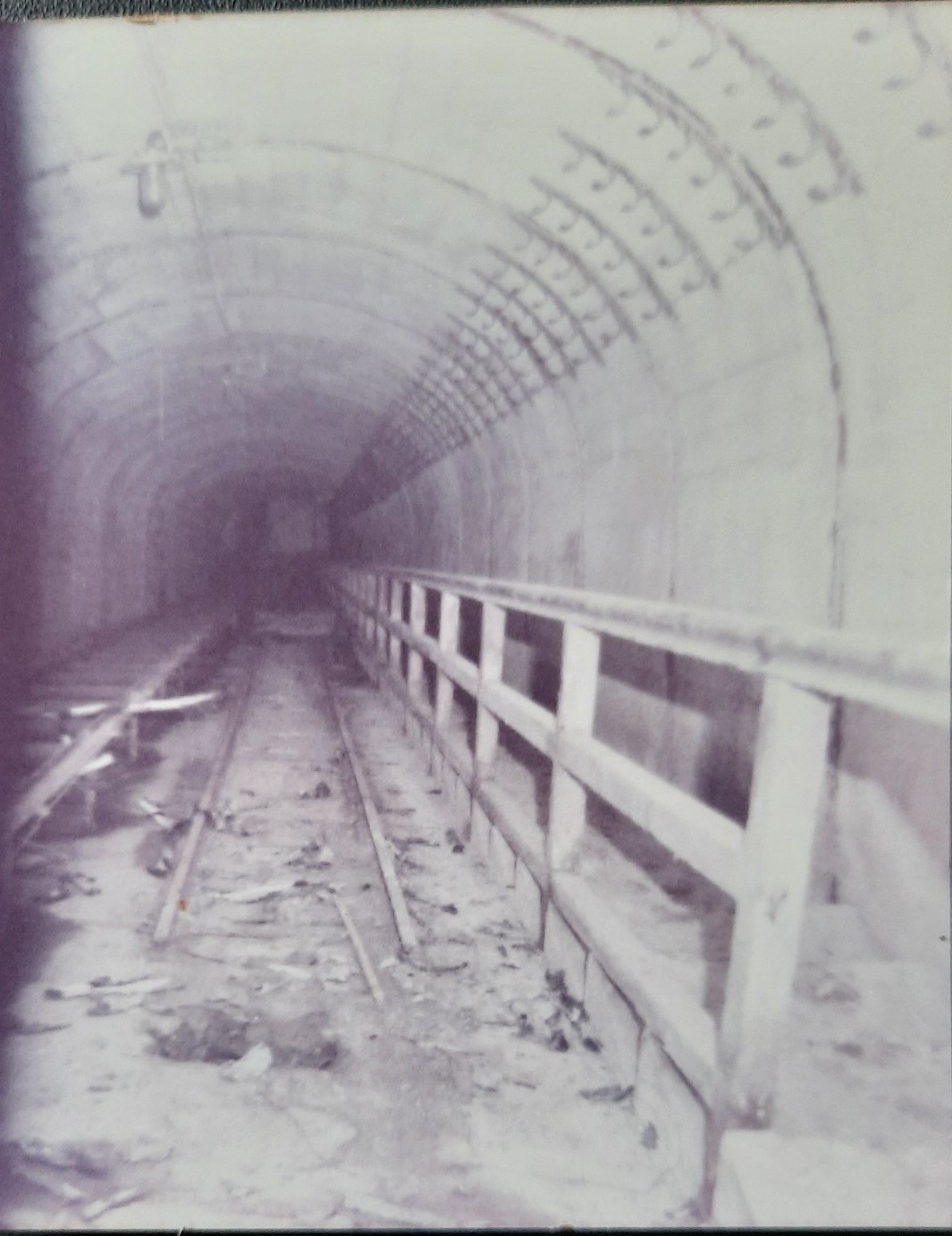 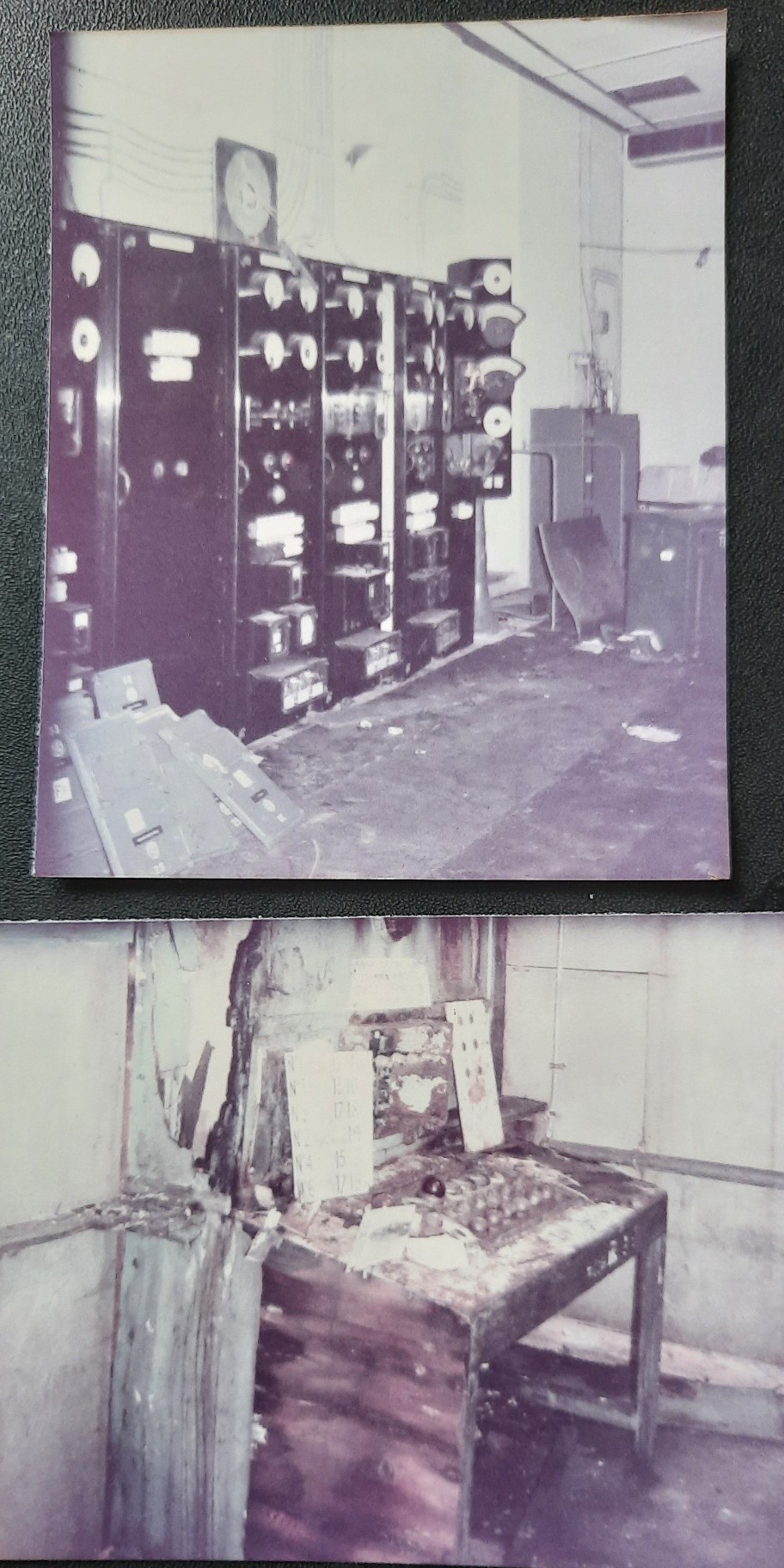 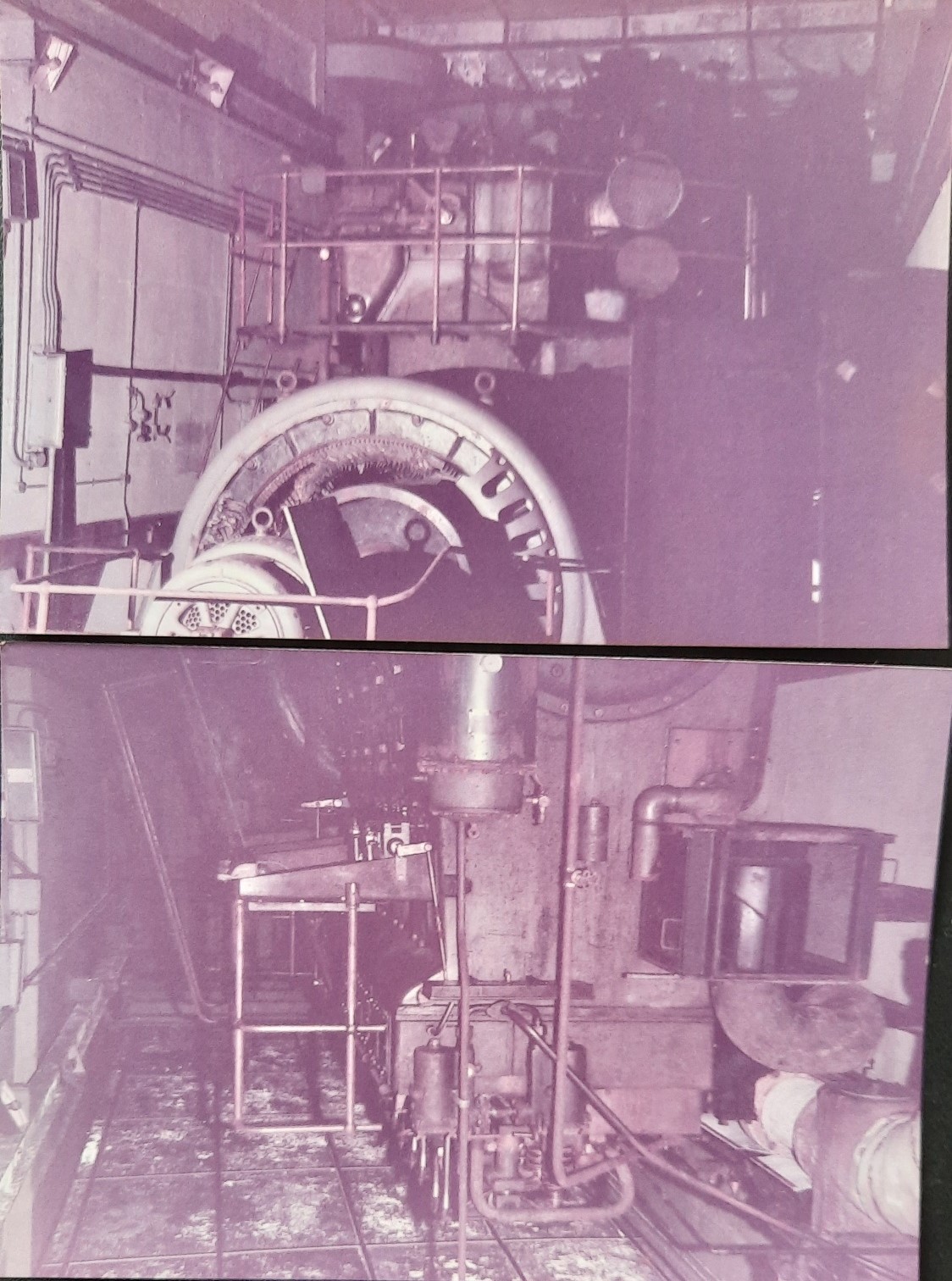 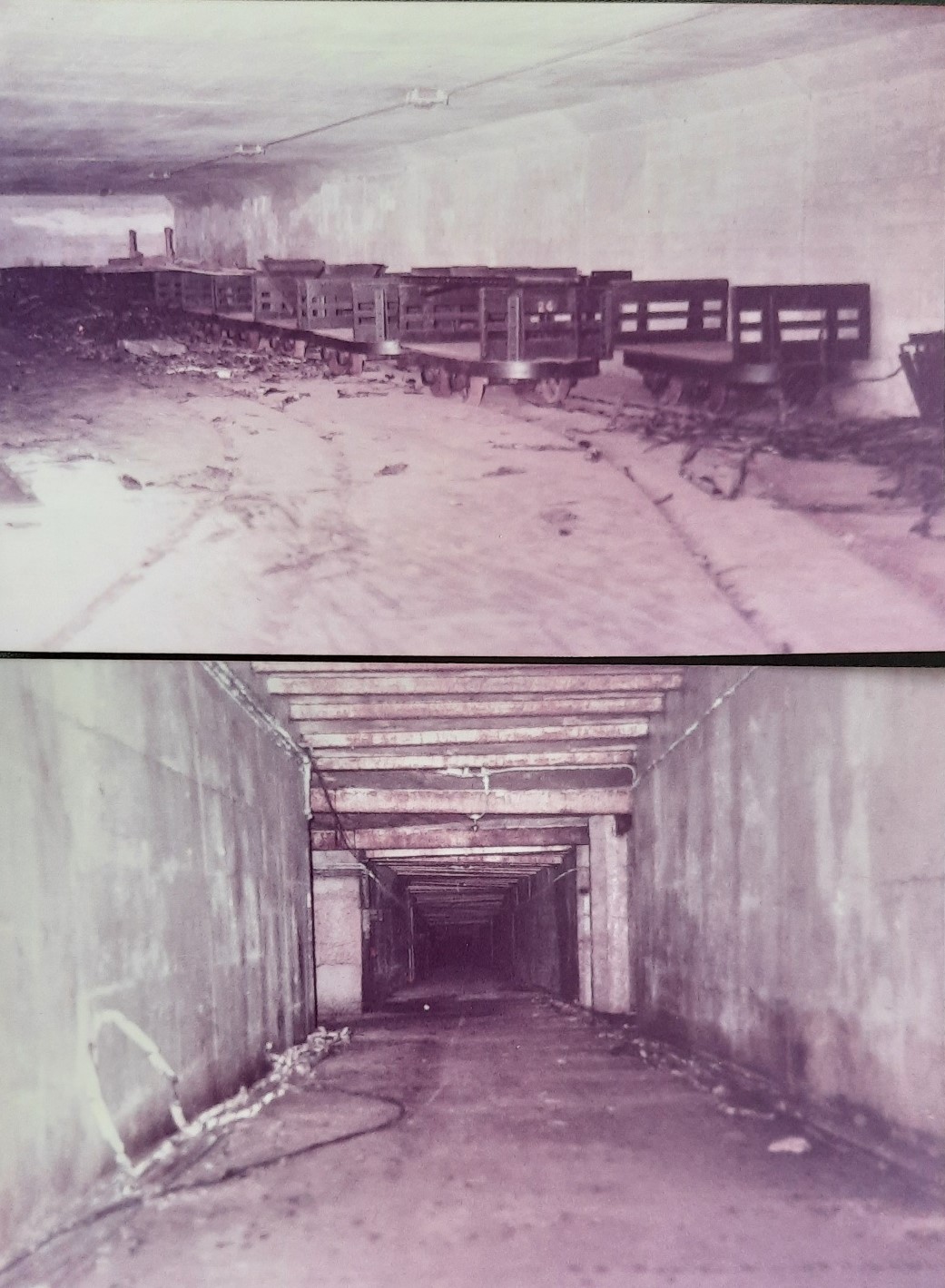 pme said:
Here are some ancient film based pictures of monkton in about 1978. Before the Artists arrived!

thats really cool thanks for the images

Never get tired of seeing photos from this place. Nice one guys
H

night crawler said:
Never get tired of seeing photos from this place. Nice one guys
Click to expand...

Likewise. I've walked the length of the tunnel a couple of times. Now it is blocked completely at its far end. Network Rail started to get rid of the entire above-ground transfer dock when wanting an area for storing equipment for the electrification of the main line through to Bristol, but gave up after destroying part of it and the concrete framework that carried the decking running the length of the transfer sidings themselves. More of our history lost.

Hayman said:
Likewise. I've walked the length of the tunnel a couple of times. Now it is blocked completely at its far end. Network Rail started to get rid of the entire above-ground transfer dock when wanting an area for storing equipment for the electrification of the main line through to Bristol, but gave up after destroying part of it and the concrete framework that carried the decking running the length of the transfer sidings themselves. More of our history lost.
Click to expand...

How true. Three of my pics attached.