Me and Brewtal were off to the DP meet up, so of course it would be rude not to squeeze a cheeky explore in.

Construction of the Monkton Farleigh Down tunnel was started in 1937 and completed in 1941 as part of a project to create an ammunition supply on the railway sidings of Farliegh down. The idea being that it provided a secure route of transporting ammunition that would be invisible to any kind of air reconnaissance.

The tunnel itself is 1.25miles long and runs at an uphill gradient of 1:8. It used a system of narrow gauge tracks to transport the stored ammunition up and down from the large sorting yard at the beginning of the underground section. The long uphill tunnel section used a series of conveyor systems to move the stored ammo up and down.

As well as Brewtal, I visited here with a friend who lived locally and hadn't done much exploring before.

The gradient of 1:8 is a good work out, especially if you walk the entire length of the tunnel. It took about 20 minutes to get all the way to the end.

There is a small hole in the wall that apparently takes you to Browns Folly mine. Its a petty small hole but I could just about squeeze myself halfway through to take a look through to the other side.
Frustratingly a pile of metal parts and machinery has been dumped directly over the other side, making it a daunting and claustrophobic prospect to get through. I'm sure you could if you really wanted to, but I didn't fancy it.

The walk back was a lot easier being downhill, and when we finally the glow of daylight we started to here voices of people at the mouth of the tunnel. They must have heard us too because they shouting down to us to say hello.

For some reason I decided that 'Hello! We are not Murderers!' was the most appropriate response.
They turned out to be people doing an 'Urban Photoshoot'. So we had a good chat then went on our merry way. 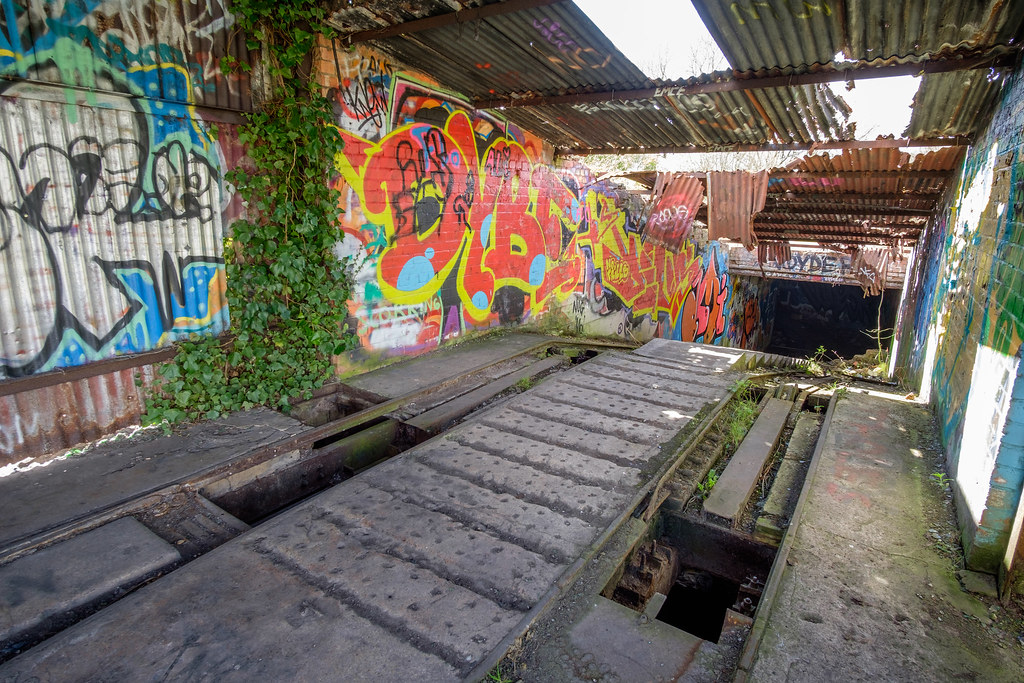 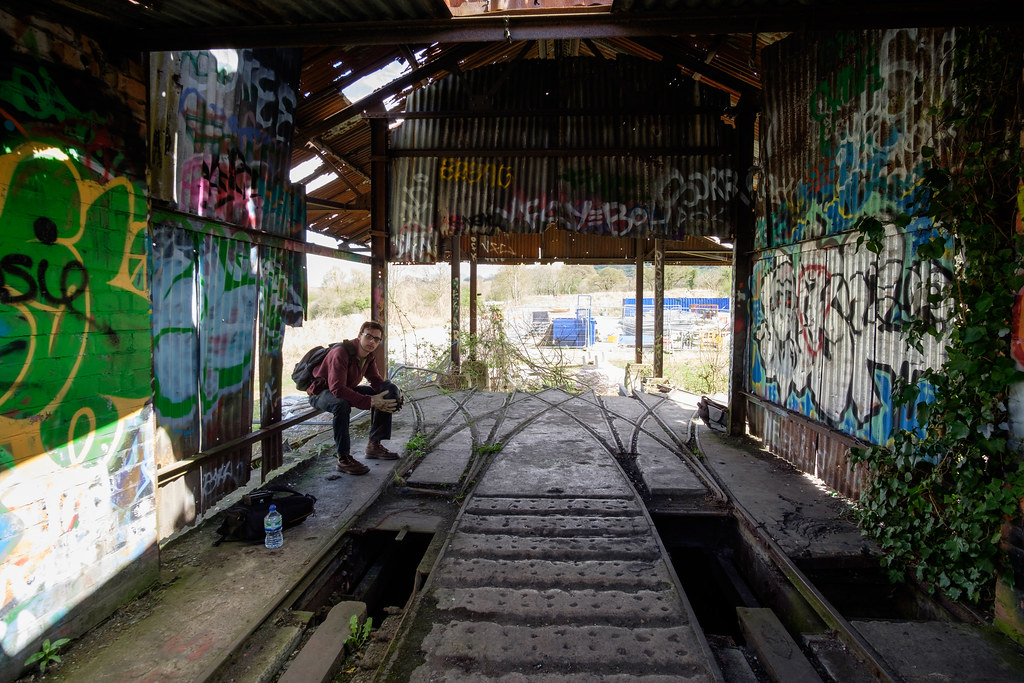 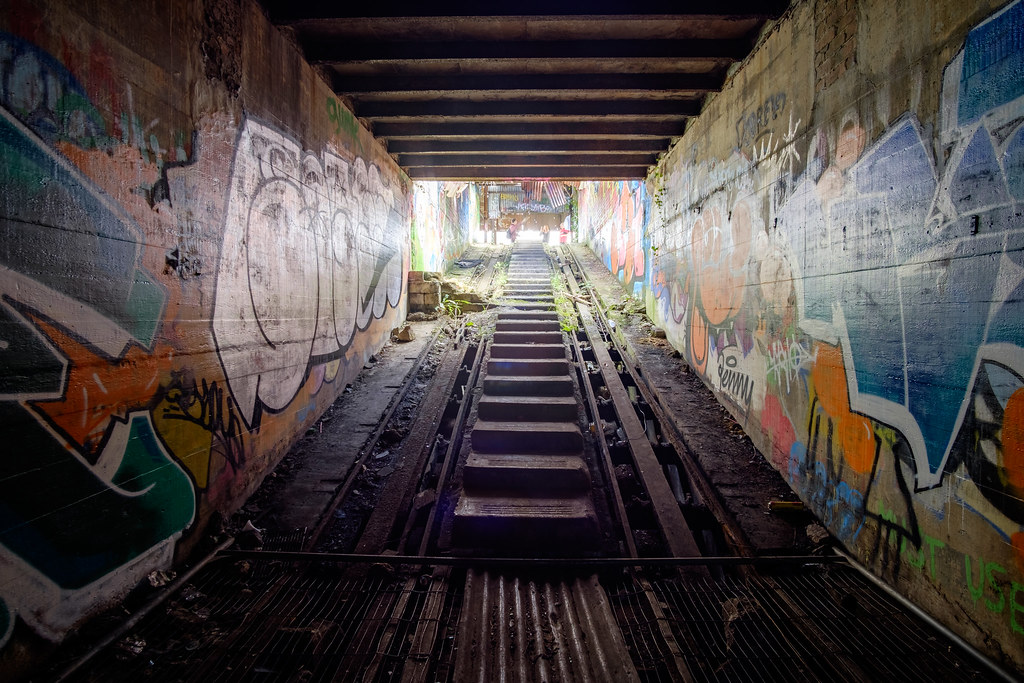 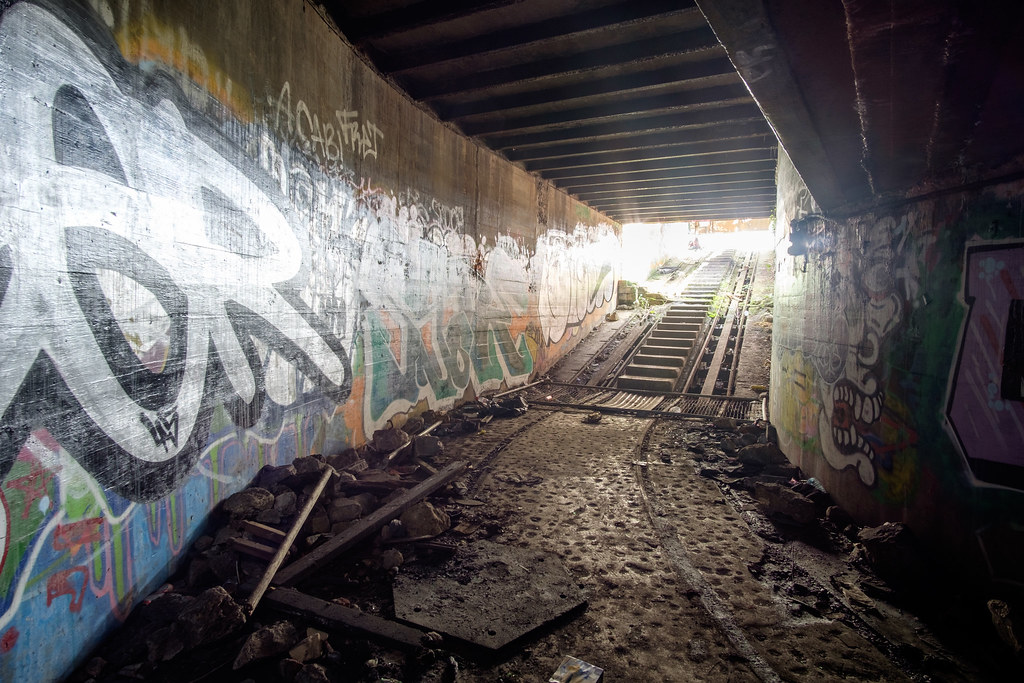 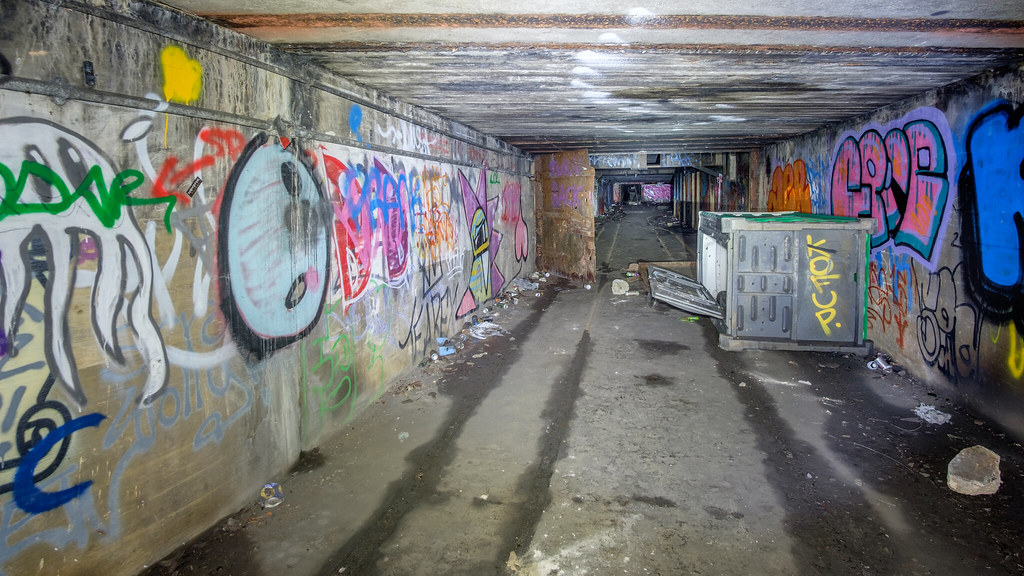 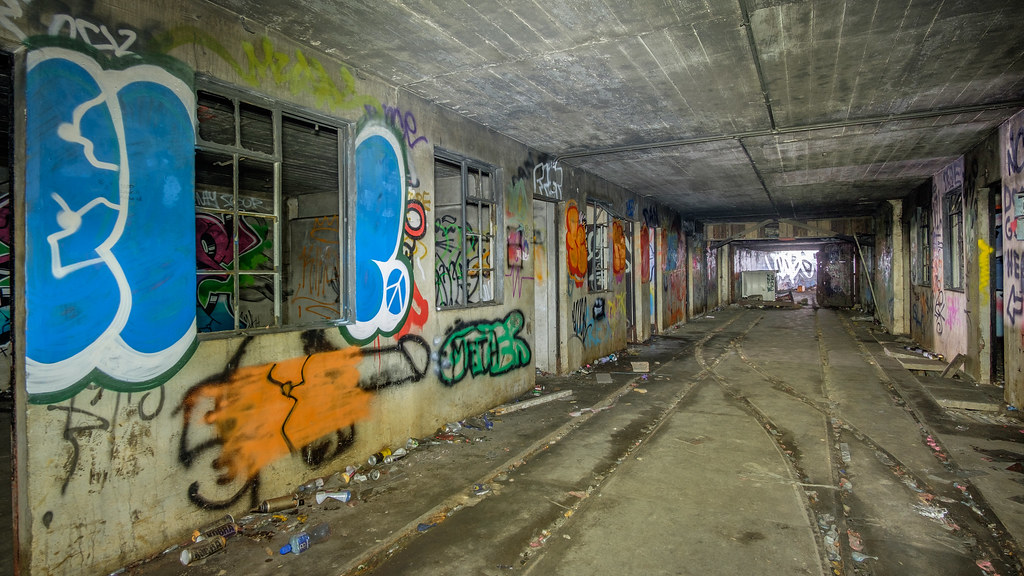 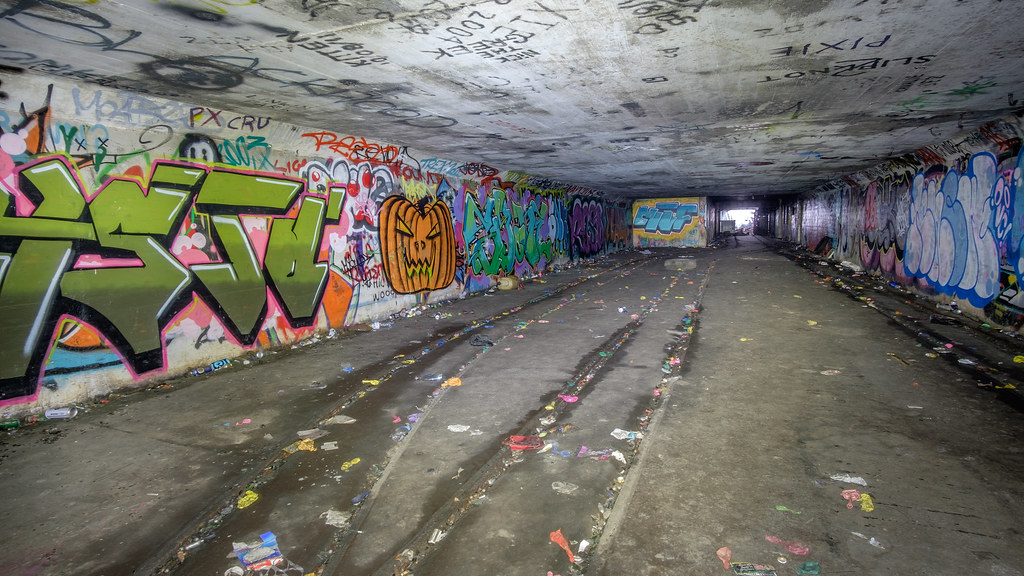 The beginning of the long tunnel section 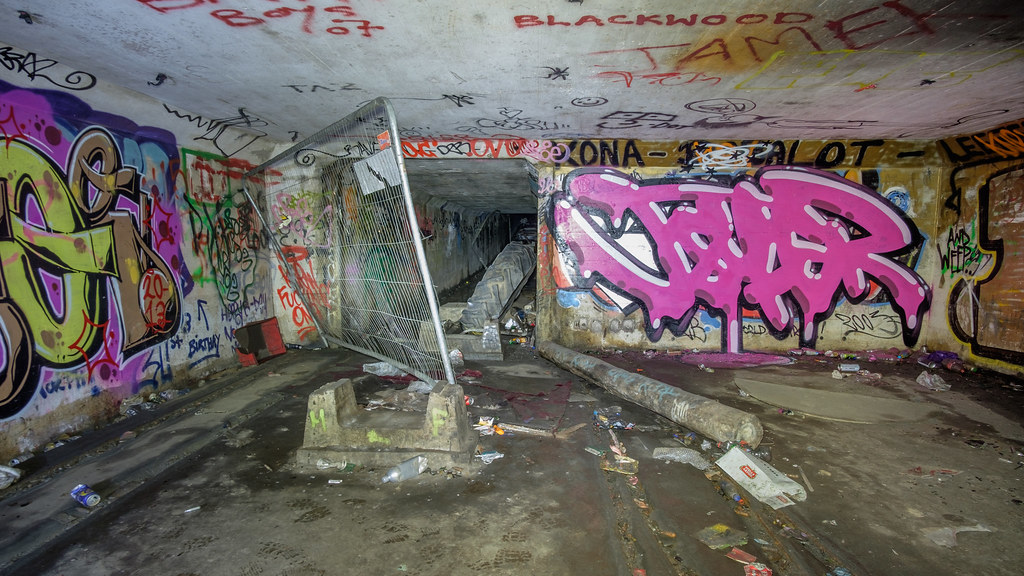 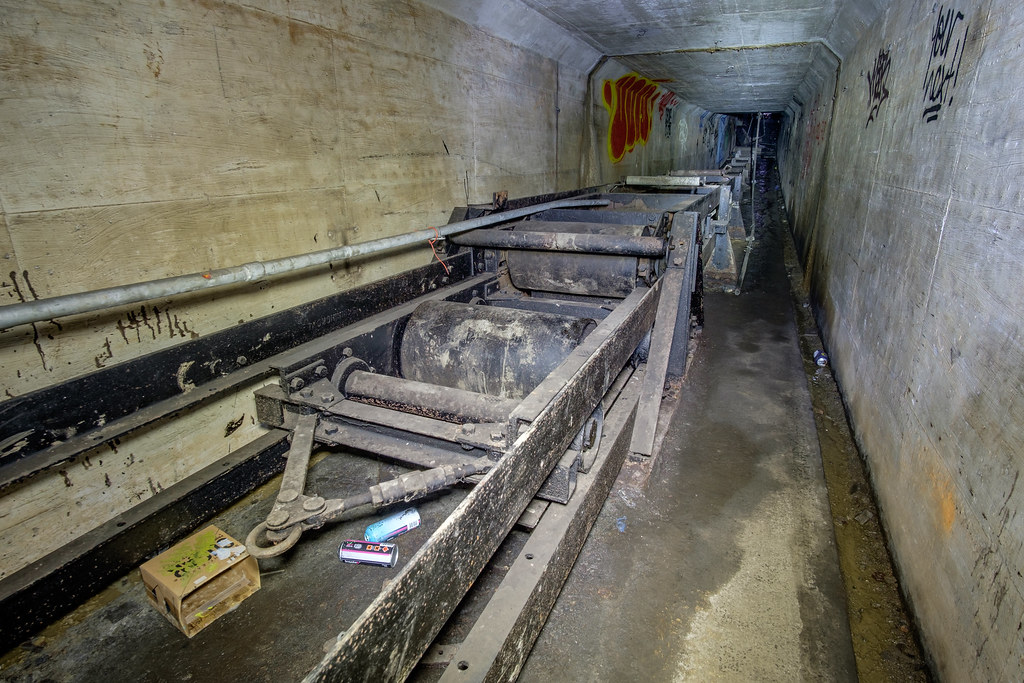 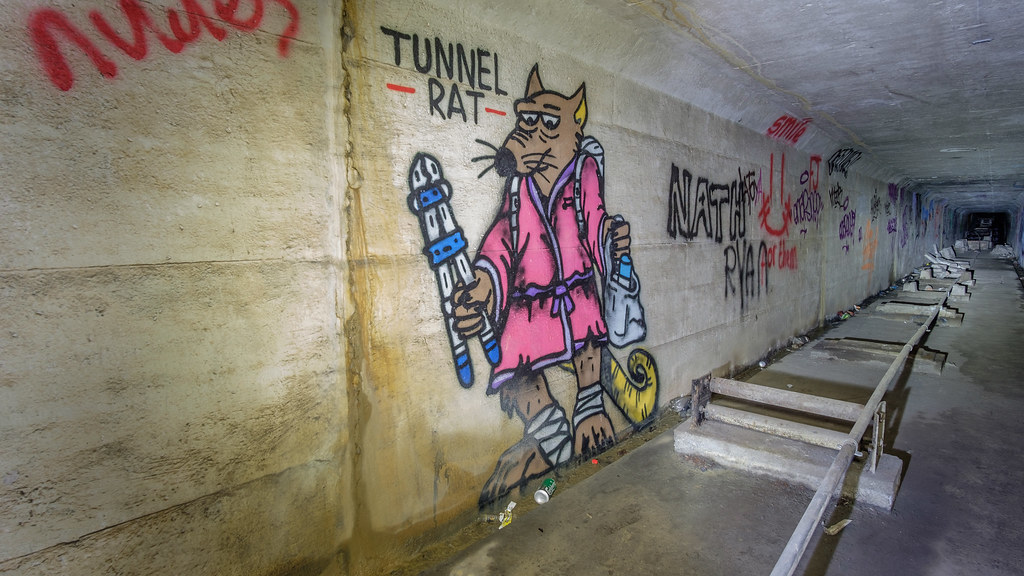 Fun Fact: The nearest Morrisons is 3 miles away. This is some serious commitment right here. 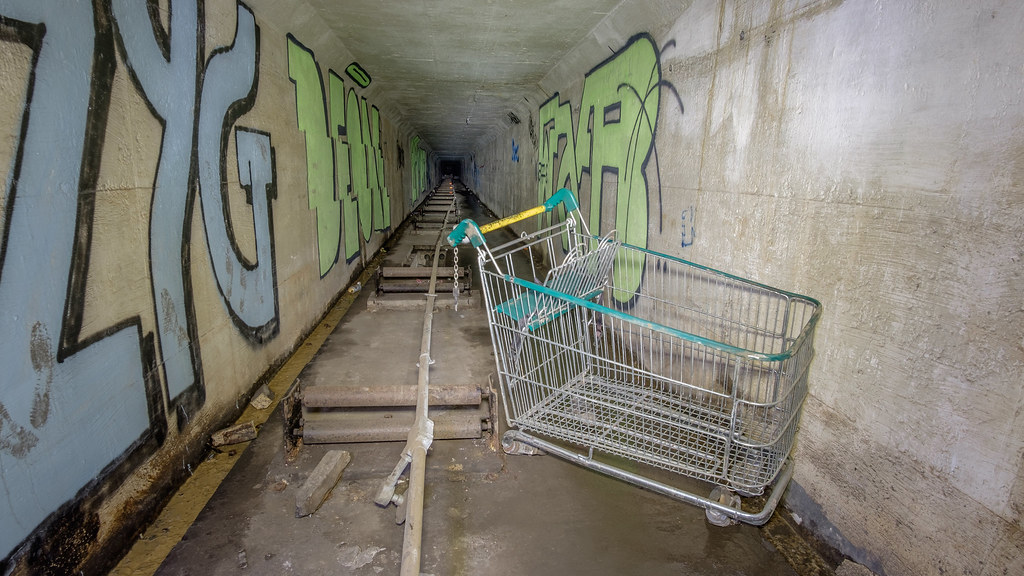 A few original markings on the wall. 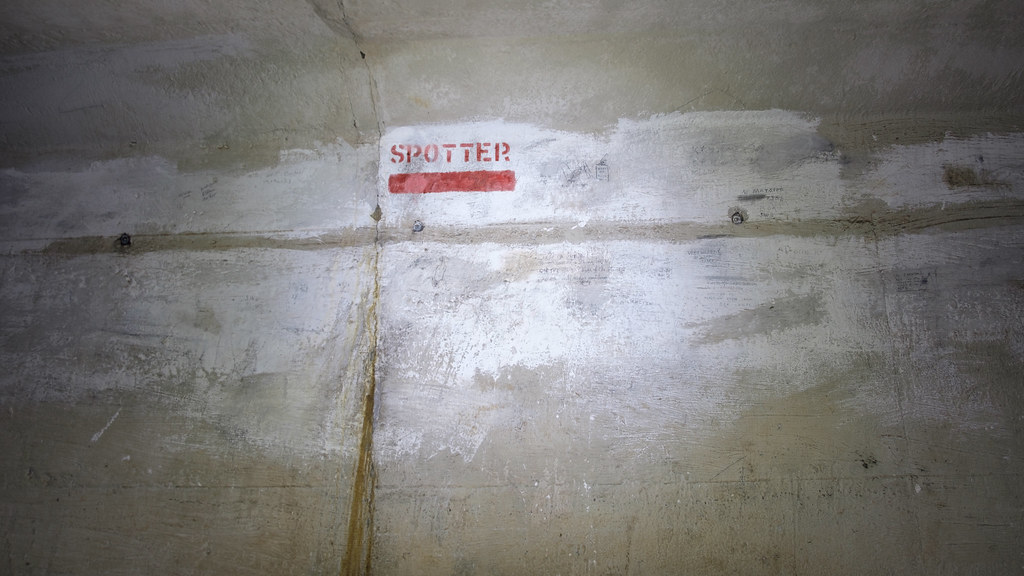 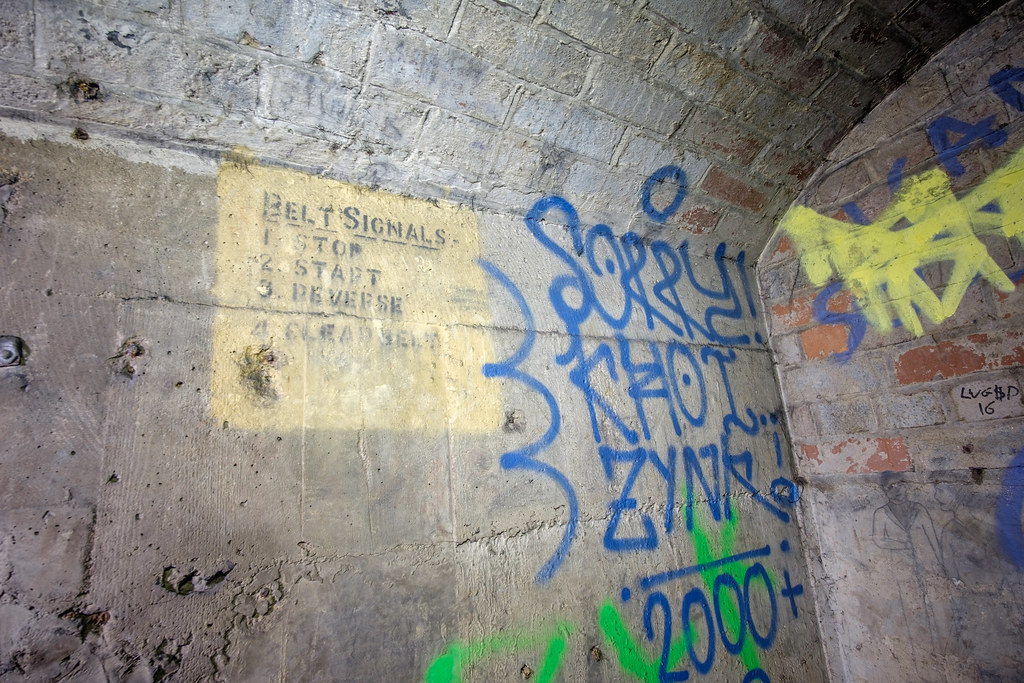 This is about half way where the tunnel goes from square to rounded. 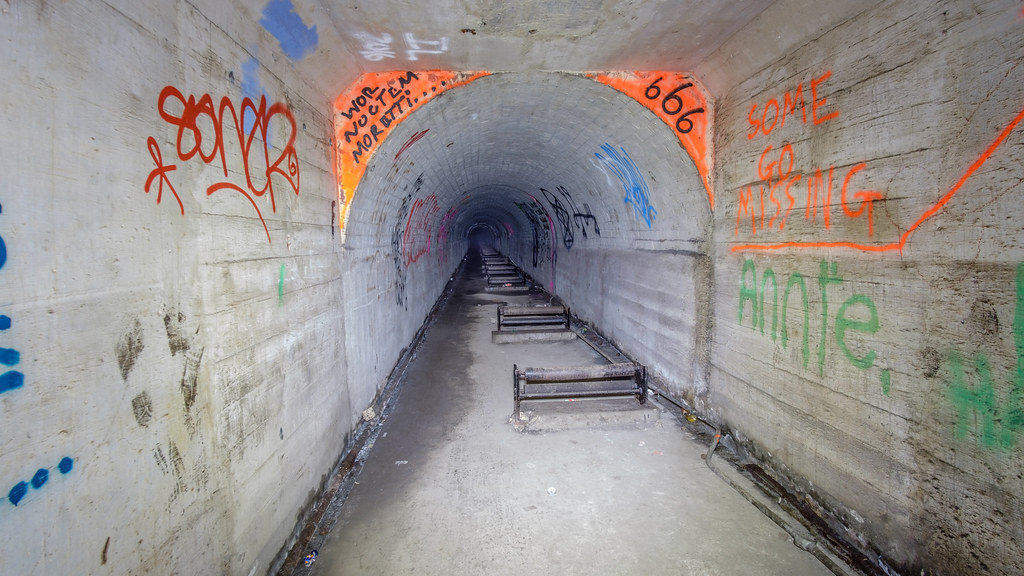 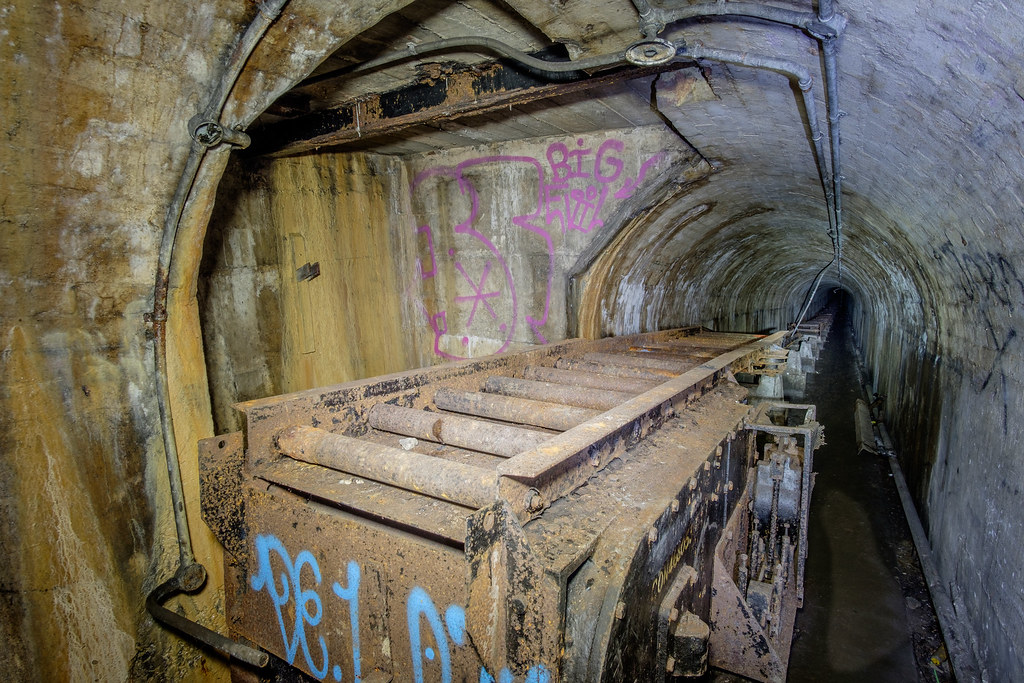 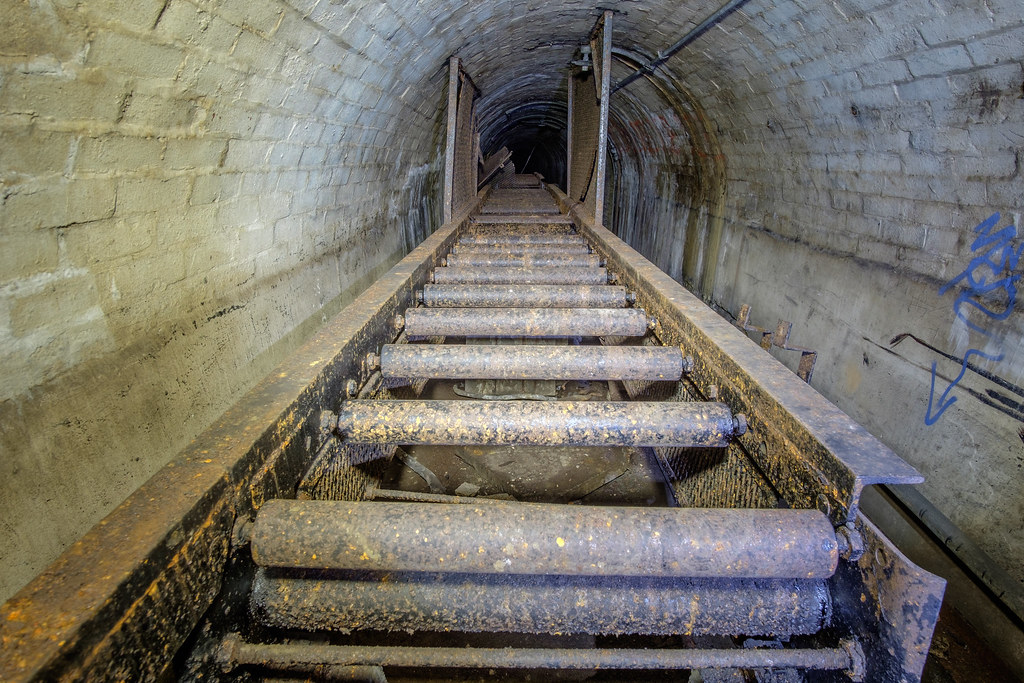 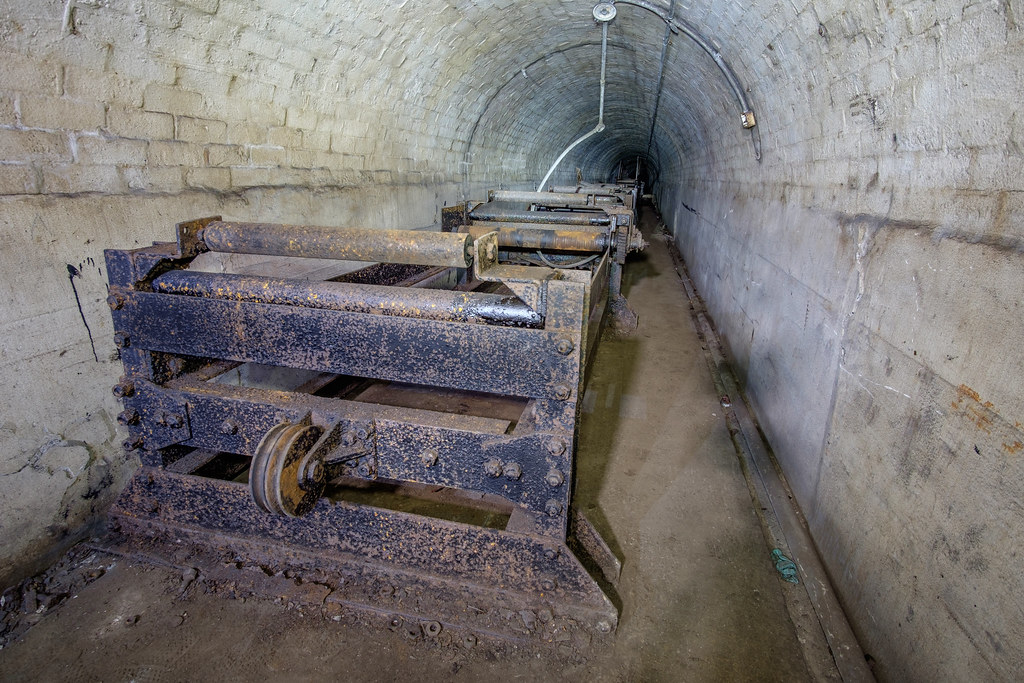 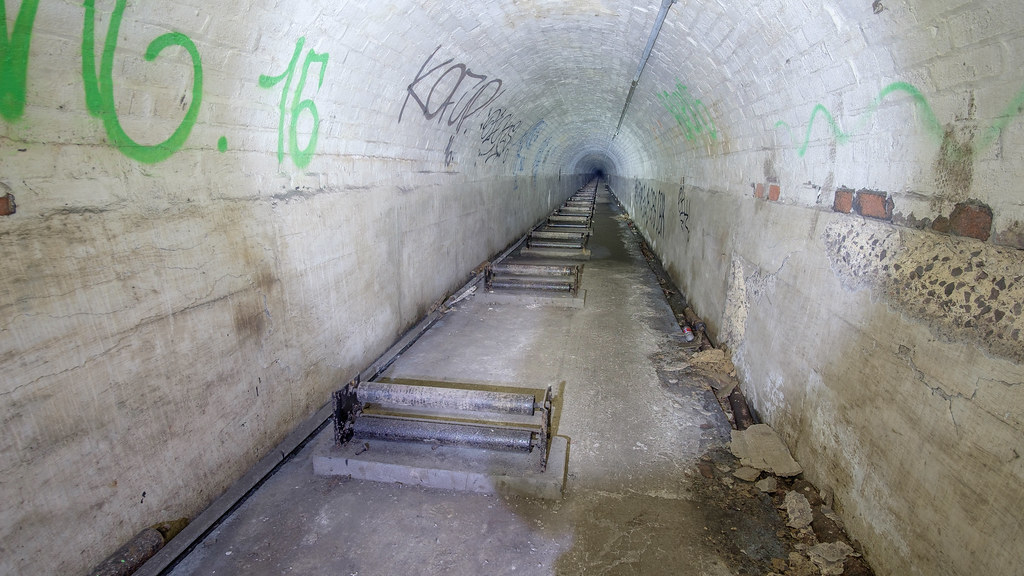 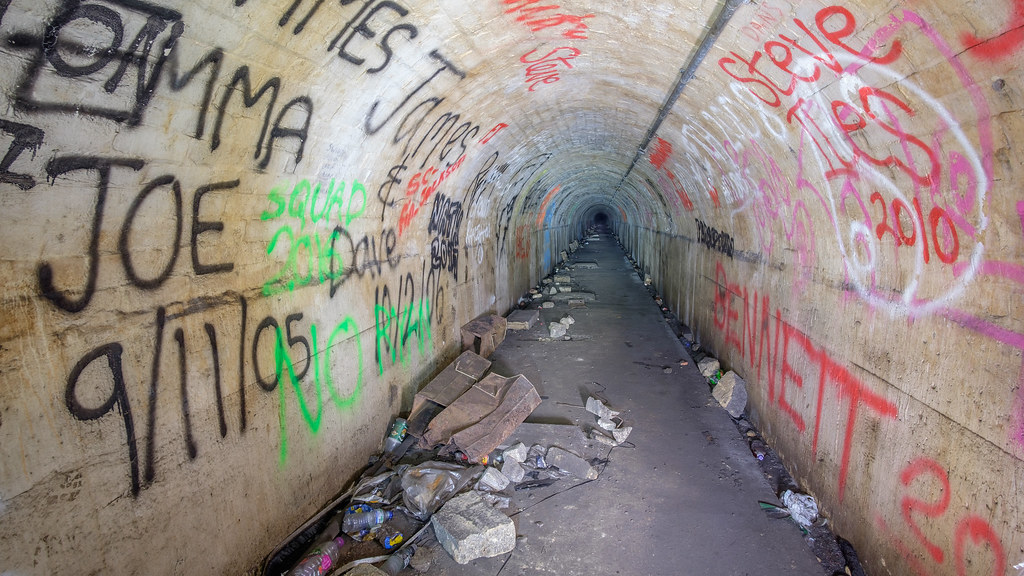 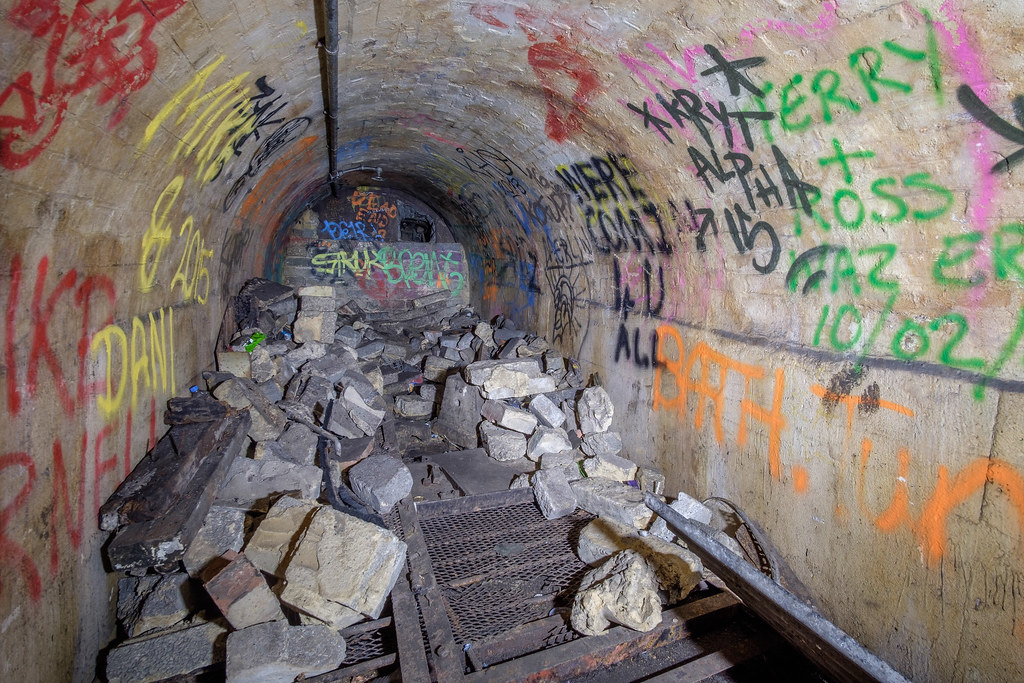 And finally the brick wall at the end. 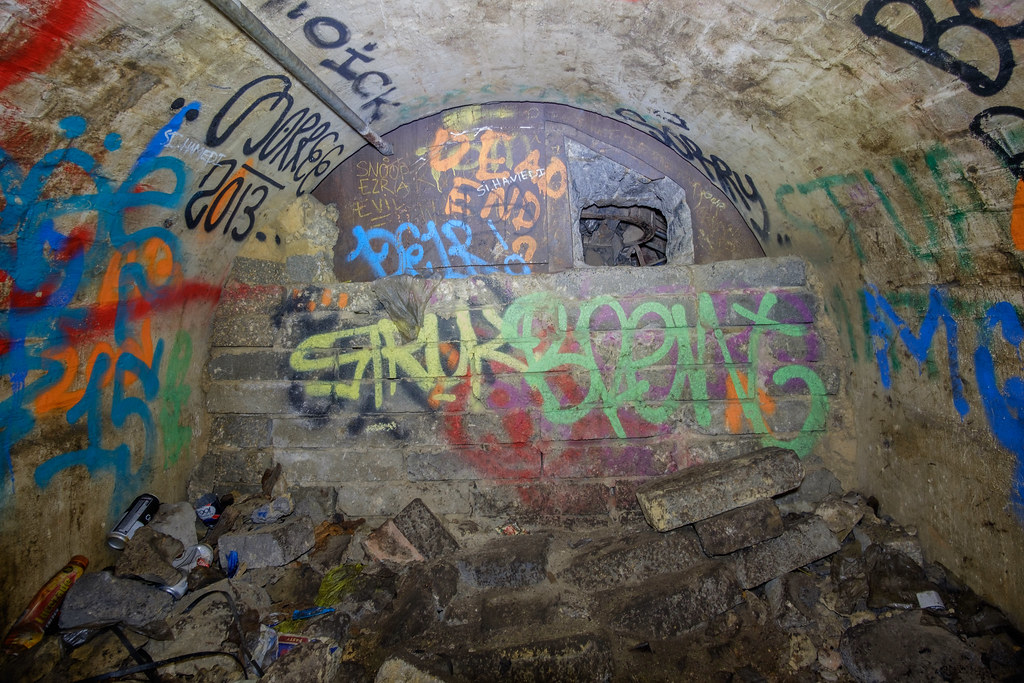 The hole at the top just leads to another (solid) wall, on the other side of that is Monkton Farleigh ammo depot, which is now used by Restore Secure Document Storage.

It switches from square to round due to differing construction methods. The square bit was cut and covered, the round is true tunnel.

You beat me to it Ben,a bit of added info.It reaches a depth of 180 feet below the Monkton Farleigh escarpment.The spotter sign on the wall marks a spot where some poor sod had to stand and keep an eye on the lines of shells and ammo boxes running on the conveyor belt and to be ready to stop the belt if one jammed or fell off,an unutterably cold and boring job.......Oh and Gromr123 these are some of the best photos I've seen from here thanks for sharing.Been down there many times 20 plus years ago as I used to live in Monkton Farleigh.

oldscrote said:
Been down there many times 20 plus years ago as I used to live in Monkton Farleigh.
Click to expand...

Same, as I grew up on that side of Bath. Used to be on of my childhood and teenage playgrounds.

Surprised we never down there
B

Great pics mate. Was such a good day. I've never enjoyed walking in a straight line so much!

Because it's become the norm to take me ages to even get my pics off the camera (6 explores on the card now haha!) I'll post the one of the 3 of us because I am so chuffed with it.

(Hope it shows up ok, iPad doesn't let me choose the size!)

Oh Boy, one I got to before you, then krela spoils it by saying he explored it in kindergarten, I suppose me chem lights had gone out.
Nice One, Thanks

These are the ones I got on my camera 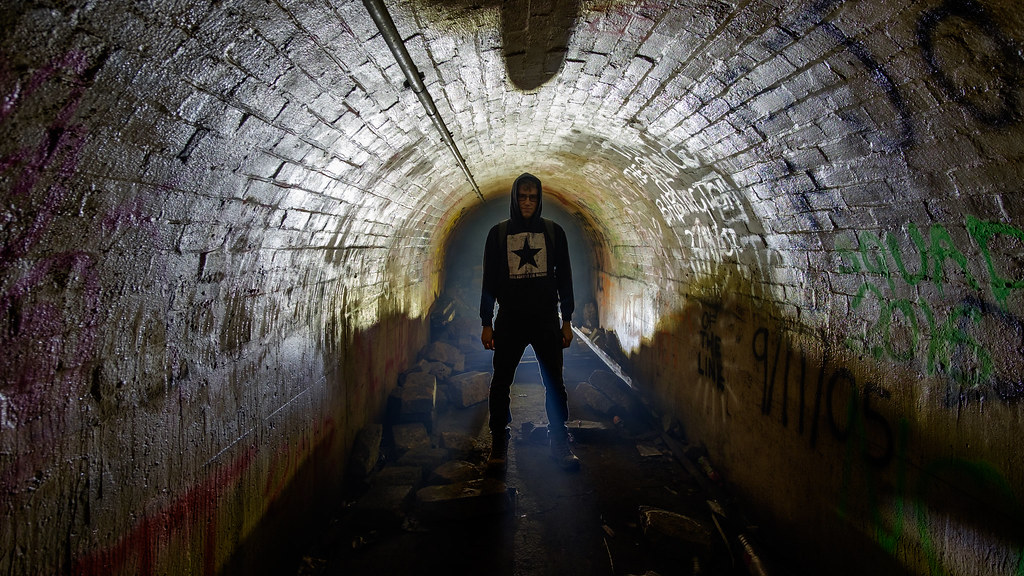 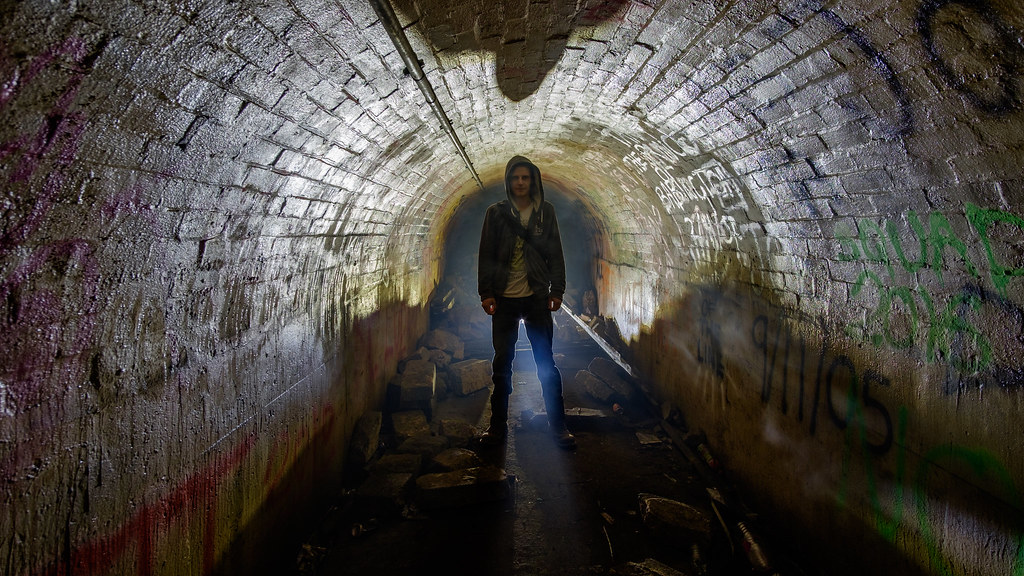 I like this! Very interesting history and some cracking shots there, very well litI'm never surprised where a shopping trolley can turn up but that must have been some serious agro gettin it down there!..makes you wonder if it was taken down there to carry stuff out, like metal??

Thanks I really enjoyed that

Crazy shadows in ur tunnel shot Brewtal, love it

Very good post. There seems to be a lot of graffiti. But nevertheless you've got a lot of good shots.
Last edited: Apr 2, 2017

Incredible photos guys, great to meet you both too!
Thanks for sharing

Most interesting. Really cool take on the place!

There are certainly some nice colours down there, and you have come away with some great shots

was nice meeting you both
S

Cracking set there as usual.
F

Blimey !! This place goes downhill (no pun intended) on an almost daily basis. Went here last about two years ago and there was very little graffiti once you started the accent of the tunnel. Its a real shame too cos there was tons of original scribblings from the poor sods that once worked there.! Got to say though that you both got some crackin shots especially the backlit ones.

Thanks all! Yeah the graffiti did start to fade away about 1/2 to 3/4 of the way down, but picked up again as we got near the very end. Shame as I bet its covered up a lot of the original markings and old drawings sketched into the wall.
H

Nothing here since 2014? I have visited the area several times over the years – partly because of my interest in nearby Box Tunnel, and the proven fact that the sun can shine through it, twice a year. I joined a tour of the WWII ordnance store area before it became a privately operated secure document, etc depository. And have walked the length of the conveyor tunnel at least twice. I photographed the remains of the platforms for transferring the ammunition between the standard gauge trains and the narrow gauge wagons that ran from the platforms down the sloping track to the bottom end of the conveyor.

Sadly the platform remains were destroyed when the area was earmarked for use with the electrification of the Paddington to Bristol main line, now halted at Didcot. An attempt to bulldoze the entire transfer dock area failed for some reason. See before and after photos.

Curiously, in the comic The Eagle in 1950 there was a serial called The Secret of the Mine. It was set in north Africa, at a mine near the coast, with a tunnel being dug by Axis Power workers under the Mediterranean to beneath the Royal Navy dockyard and harbour at Gibraltar. The plan was to plant a large stack of explosives at the end of the tunnel and explode them, thus wrecking the dockyard and sinking RN ships.

As soon as I saw the transfer dock, and the sloping narrow gauge track beneath the corrugated iron roof, I was taken back to the story in The Eagle and the sketch of the shed that concealed where the quarry railway line went underground. I have always wondered if the author – Ronald Syme – had been stationed at Monkton Farleigh, or had known someone who had been. See the scan.

I remember going down in the mid 80s when there was a museum in the building at the entrance of the old ammunition store and some of the old workings that had not been touched.