This turned out to be a very eventful trip! It taught us never to be lulled into a false sense of security (well, a secure as you can be on an explore!)

It is my fourth trip to the NCB Coal Research Establishment at Stoke Orchard, so I'm sure the history is well known by everyone, but just in case; The CRE was opened in 1950 by British Coal's Jacob Bronowski, to test and research methods of extracting crude oil from coal. The CRE's scientists succeeded,, however, the proess was very expensive and complicated, and was therefore not deemed economically viable. When the British coal industry was privatised in 1994, funding was no longer available and the CRE closed its doors a few years afterwards.

I visited with Da-Mop and our aim was to document the largest building on the site - the original 1950's cream building that spans the full length of the grounds. It appears to be the most vandalised building at Stoke Orchard - with more broken windows than any others, and streaks of rust blotching the exterior.

Peering in through ground floor windows, it appeared at first just to be a regular office block - entirely stripped out apart from the odd hard hat or the occassional swivel chair. However, when i peered into the loading bay I could see two translucent plastic hinged doors, which immediately suggested to me something industrial went on behind. Even better, a huge ladder rose up the side of the loading bay, which went up to the roof. Up there, we could see huge extractor fans and air conditioning pipes - a clear indication that there is more to this building than meets the eye.

I never thought to take an external shot, so this shot I took from the water tower back in November will have to do. This does not do justice to the size of the building - it's not even close. 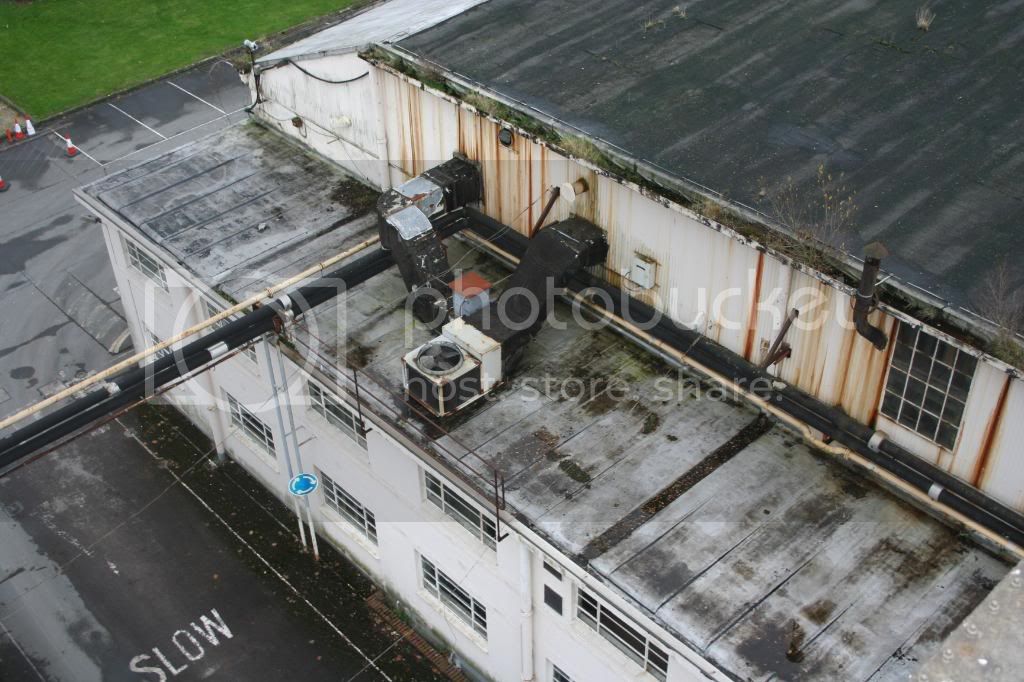 Walking in, we were hit by the jaw dropping size of the room before us. Behind the office blocks we saw, a vast factory floor rises up the entire height of the building. Several huge bits of machinery are visible at one end of the astronomical space; but more on them later. 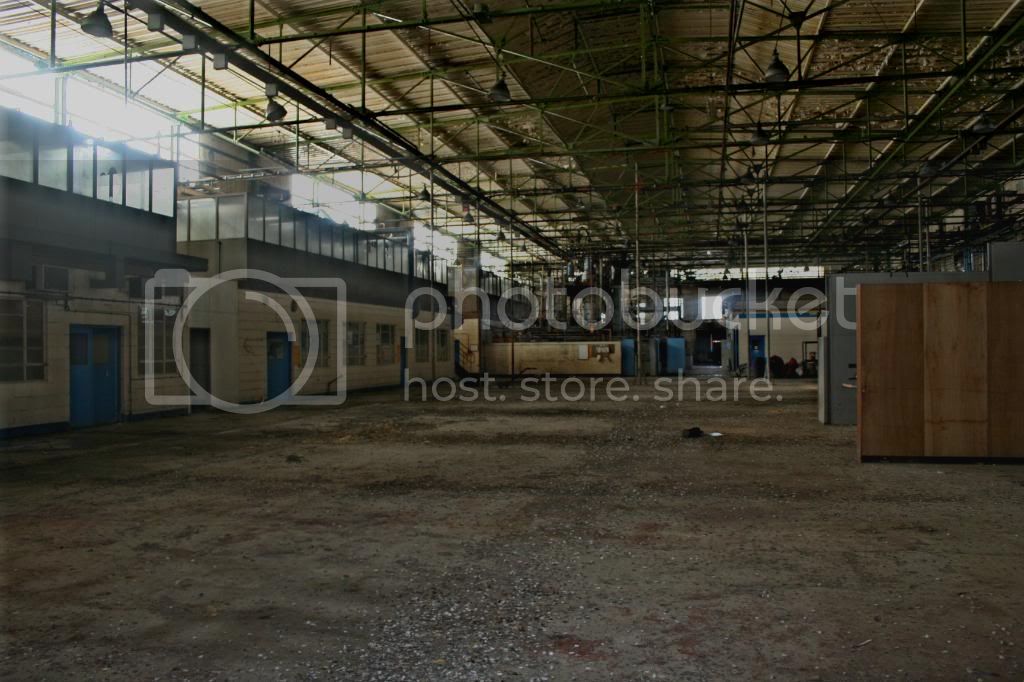 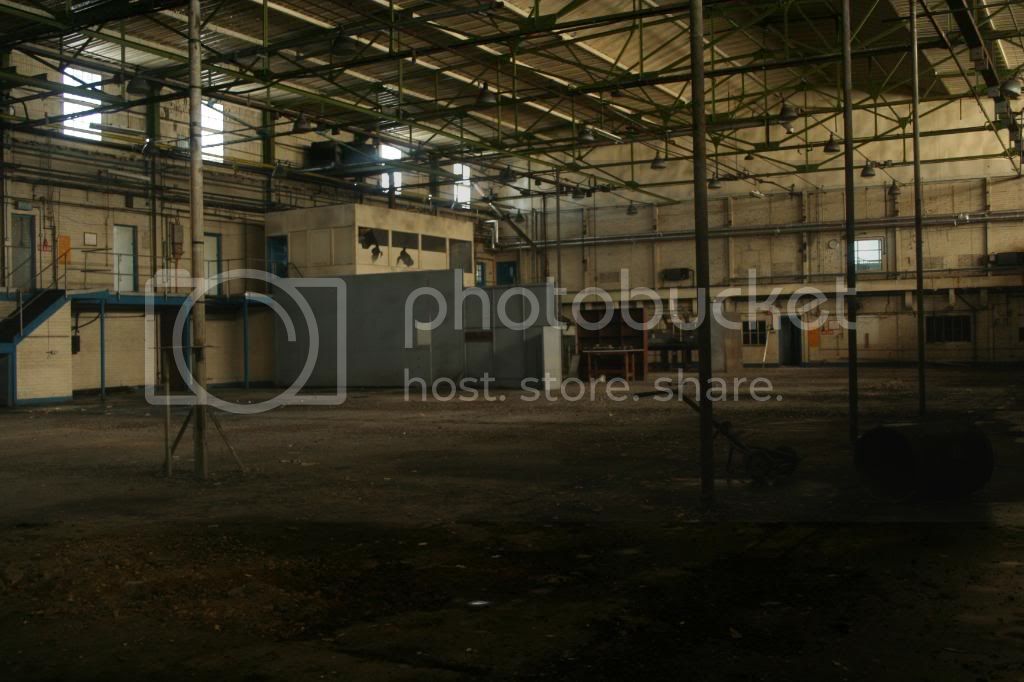 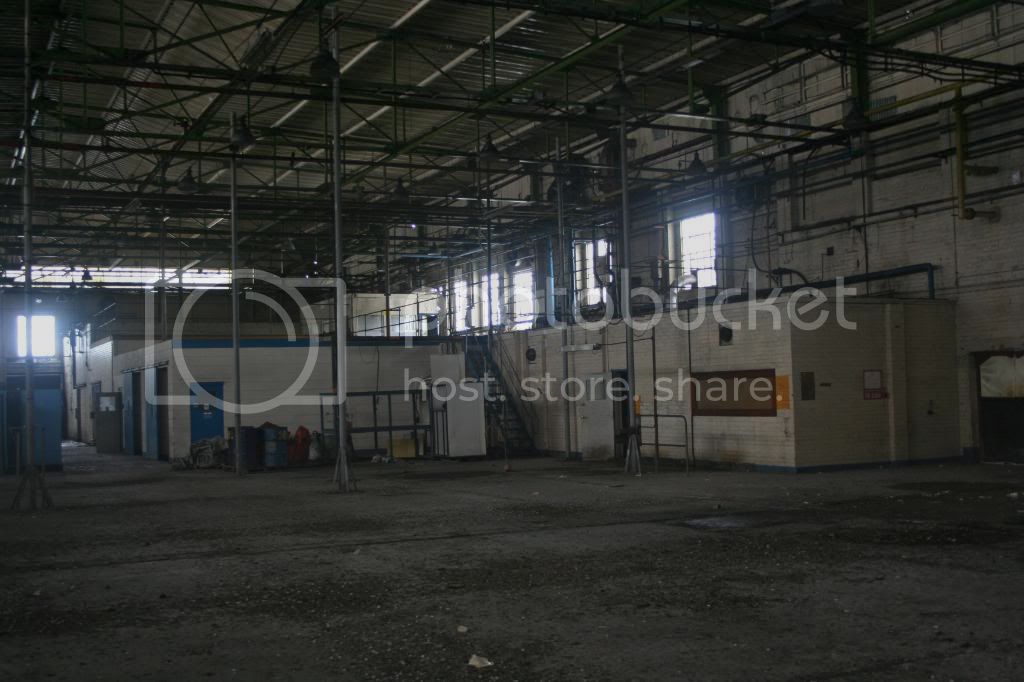 In one corner, some double doors caught my attention. but these are no ordianary doors - they make up the first aid symbol. Obviously, in this room people needed to know where first aid was - and quick. 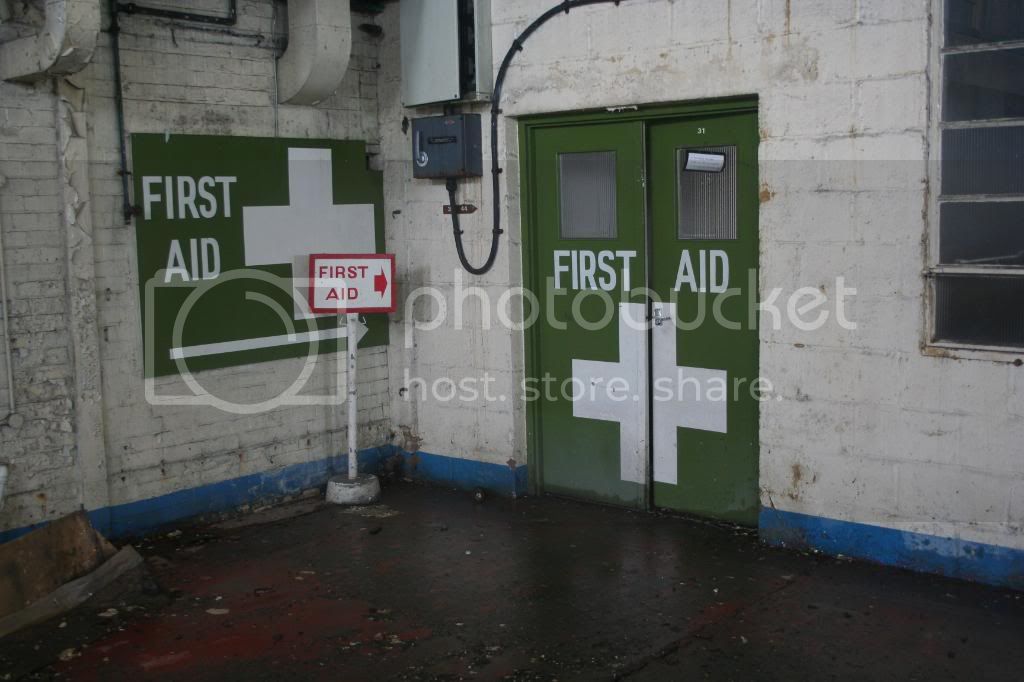 Naturally, we went inside. 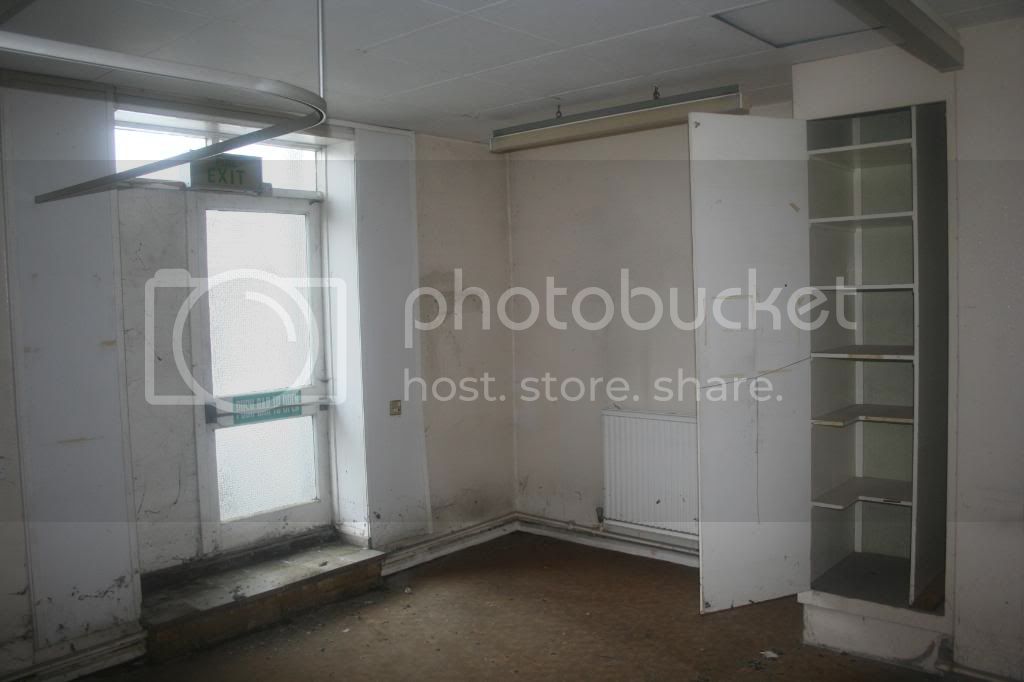 It reminded me of a hospital inside - the above photo shows a room with a curtain rail in it that would have surrounded a bed, much like in hospitals I have visited. This must have been where the injured could be in private and get treatment. In another room, there were cupboards for medical equipment and drugs counters. The green mould on the floor was vivid - a place once so clean is now slowly being reclaimed by nature. This fantastic portable cabinet could be moved from room to room... 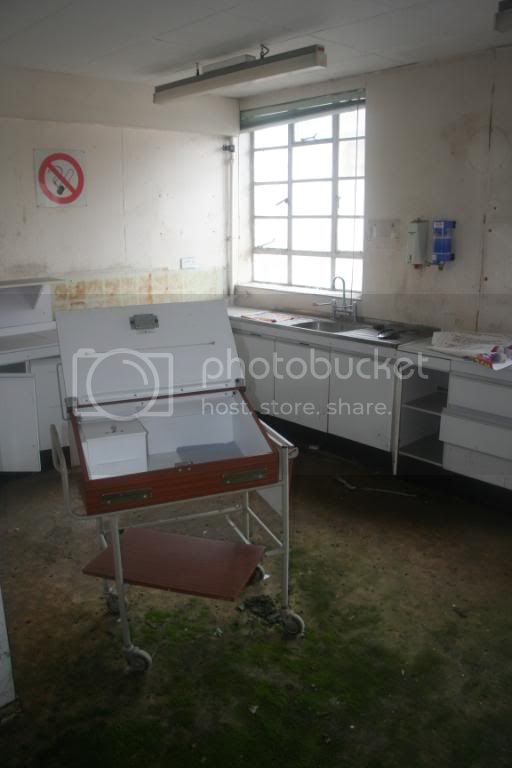 Across the factory floor there were some large workbenches with extractor hoods... 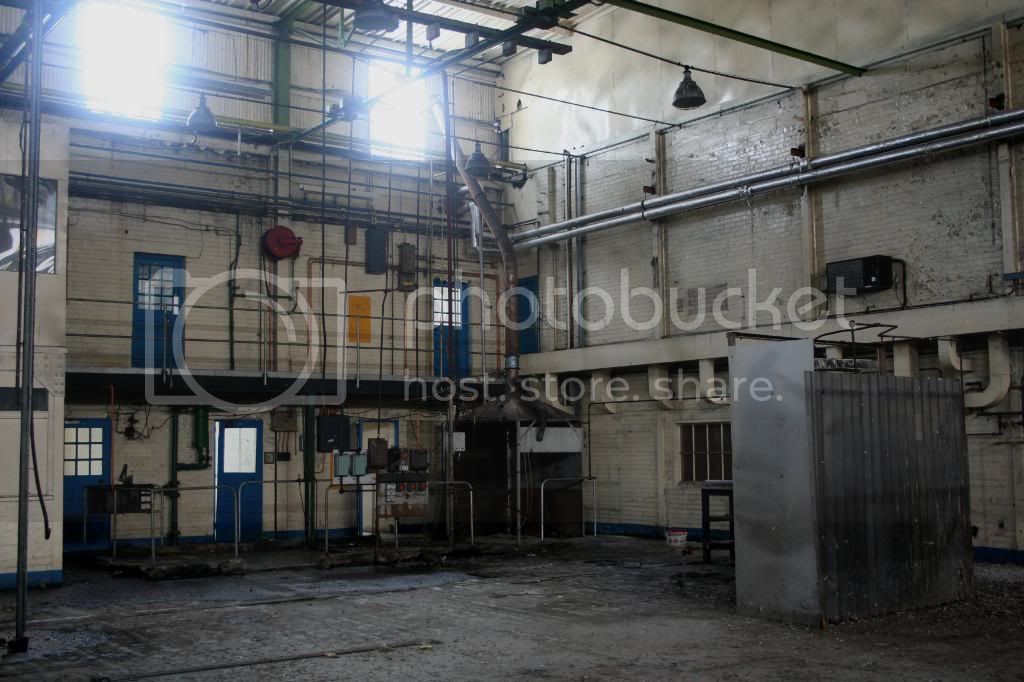 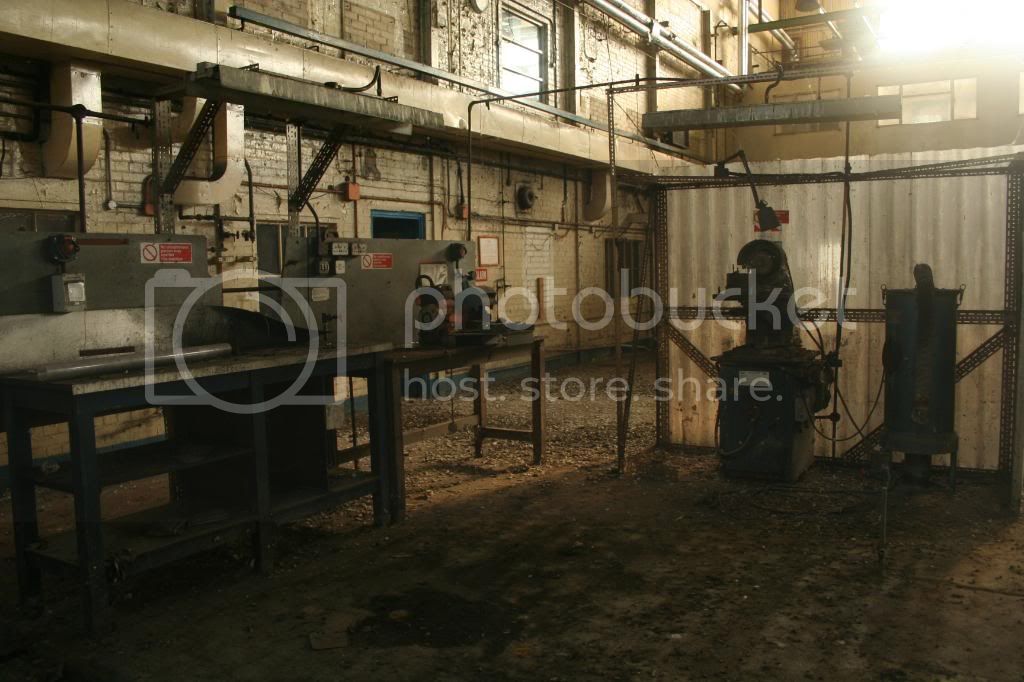 But these were nothing compared to the monster bits of machinery at the other side of the building. 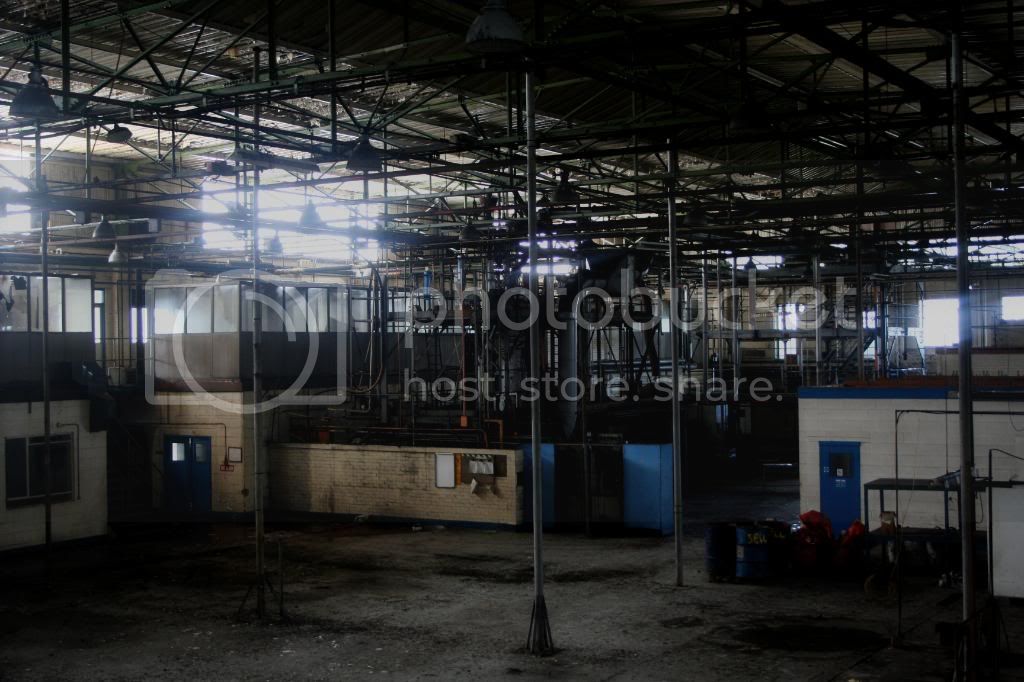 The largest rose up into the ceiling rafters, and was spread over three floors. The ground floor consisted of a fantastic control panel, some large furnaces and the fan for the huge air cooling system - which is the silver pipe that rises up the side. 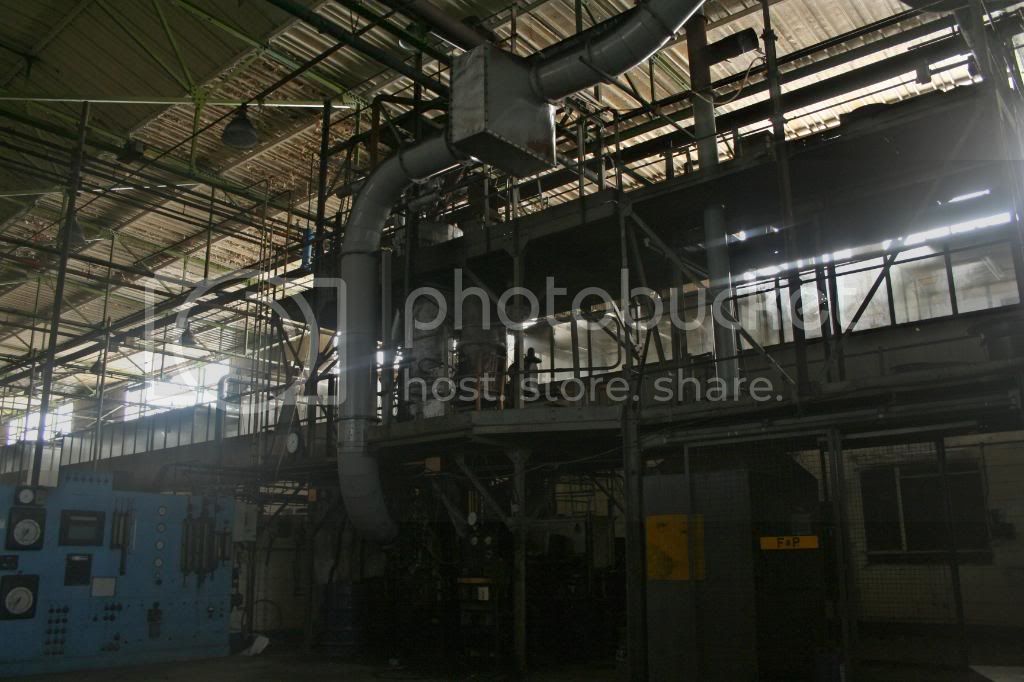 This is the amazing control panel with some vast dials... 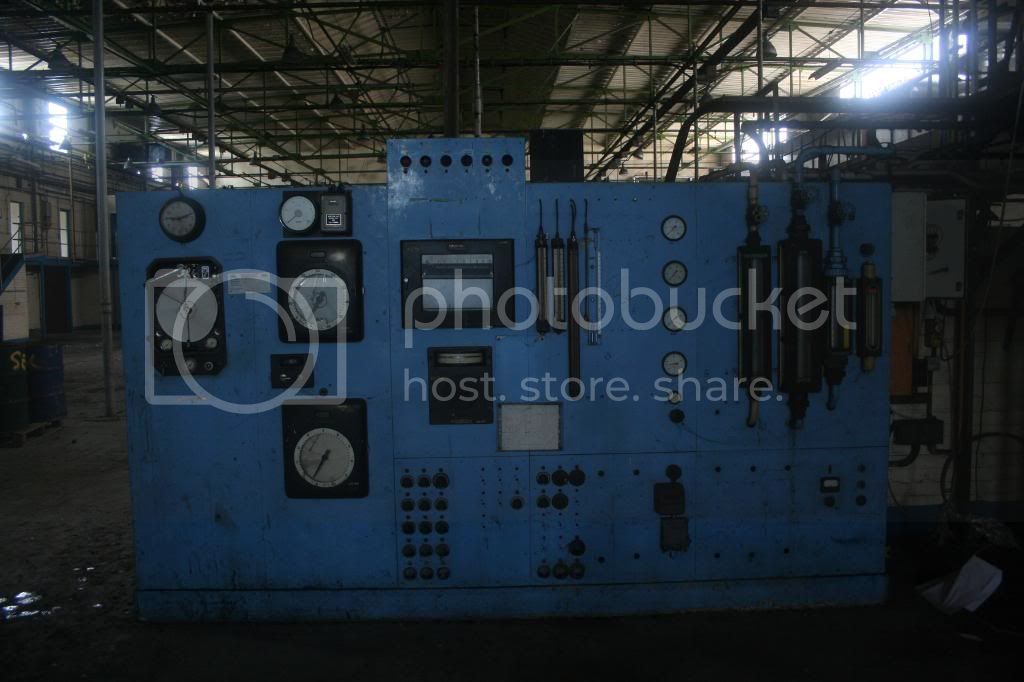 And one of the tall, thin furnaces... 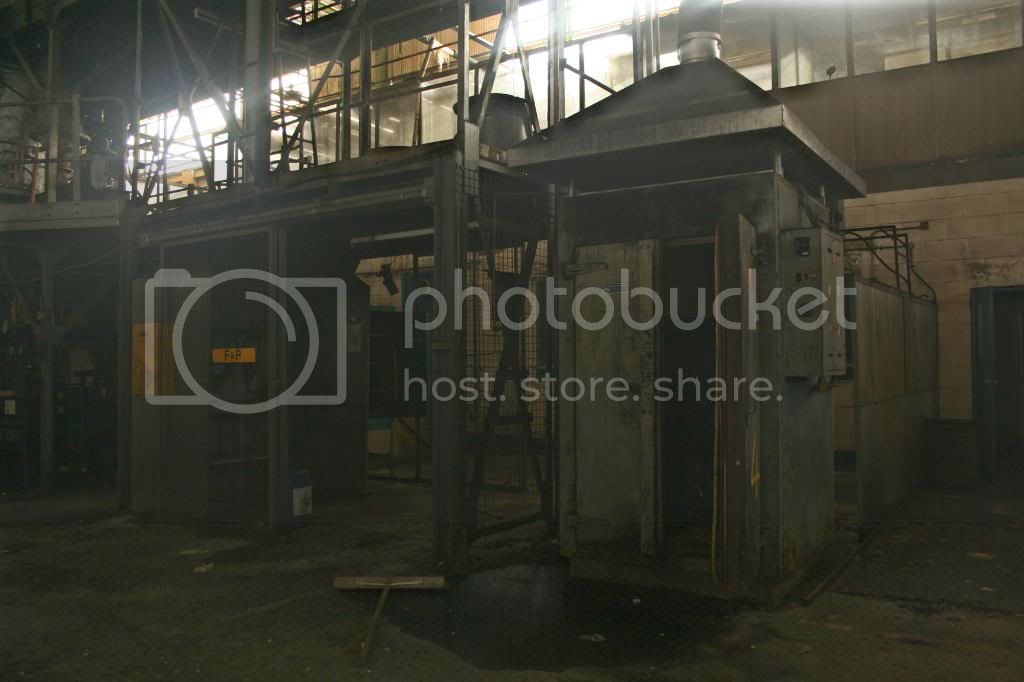 A ladder up to the first floor straddled a furnace - this cannot have been a safe place to work. I began to realise why first aid was such an issue. On the cramped first floor, a large metal object that looked like a combustor was set behind a workstation. There were tools lying around, and a panel at the side of the workstation held tiny vials of liquids used for measuring temperatures etc. 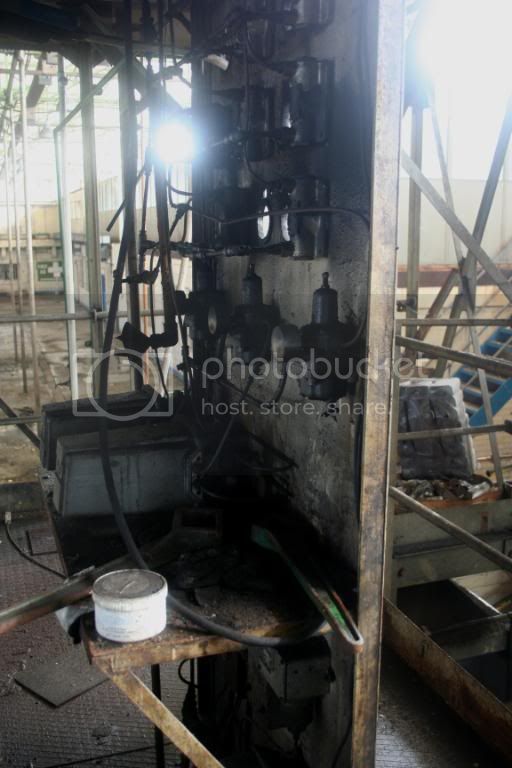 On a balcony, there were these small glass bottles, complete with stoppers, that I an only assume held the liquids that filled the vials. At the other end, there were barrels of charcoal and some metal rings. I cannot begin to guess what the rings were for... 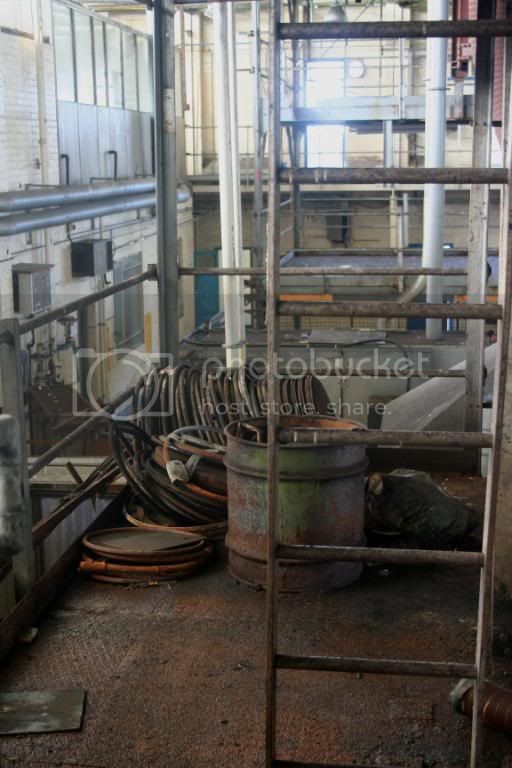 Up on the top floor, there were more barrels of charcoal and the top of the combustor. Pipes running across this floor made it even more cramped than the one below. The place is covered in coal dust even today, so imagine how filthy this work must have been. Then couple that with the intense heat of the furnaces. 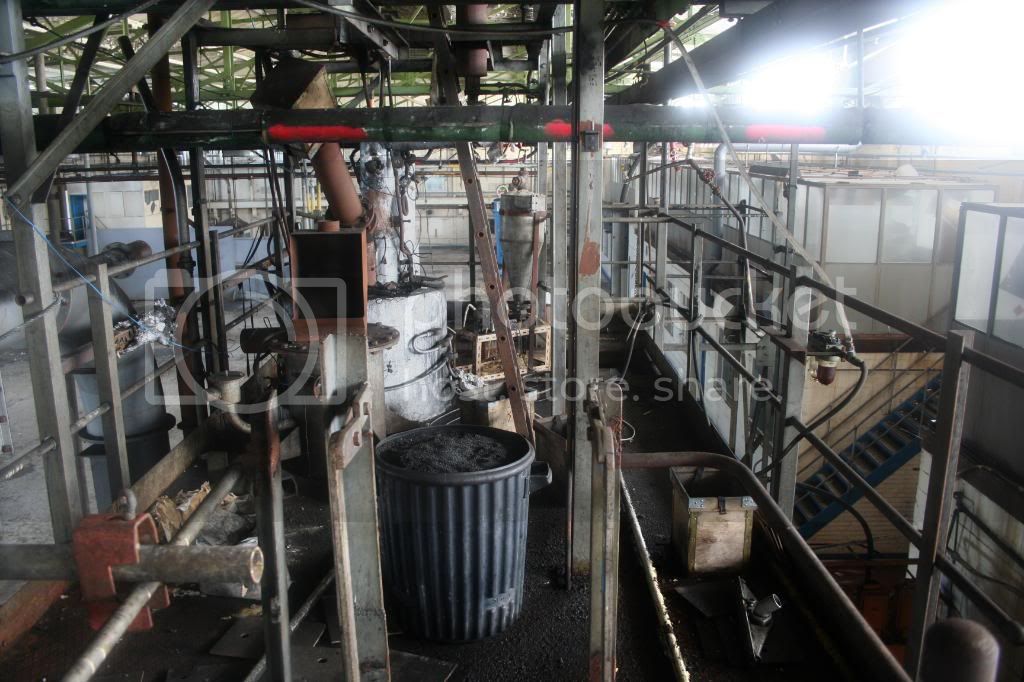 Back on the ground, there was another tall rig - this time with a staircase and caged sides. Unfortunately, it looked stripped out and this was the only bit of machinery left of it... 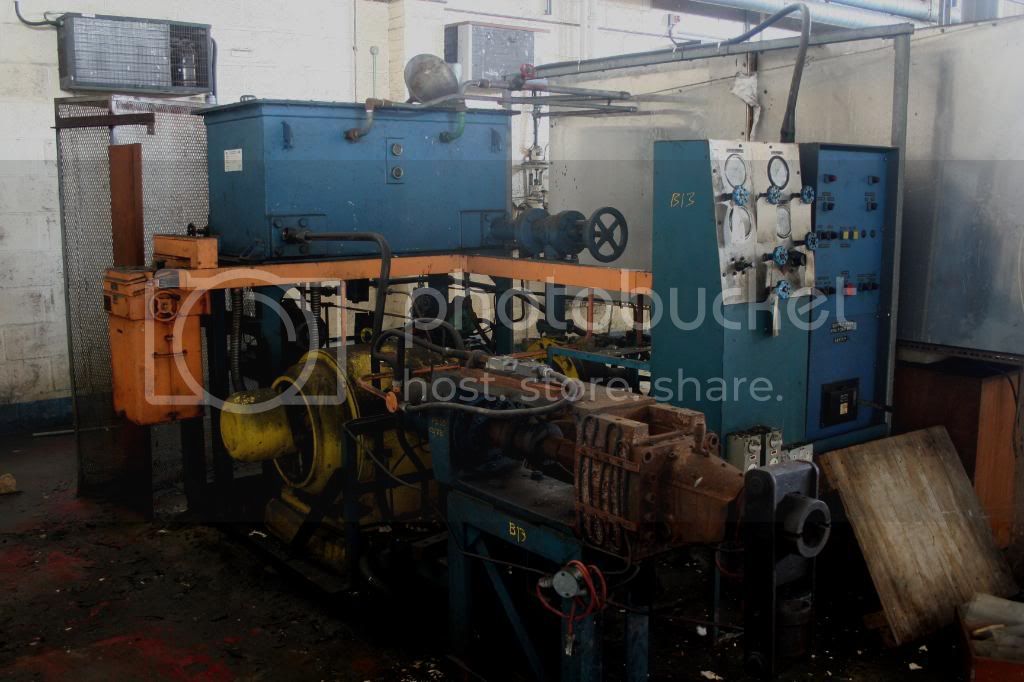 The machine on the left of this image is the one I climbed earlier - the caged one is visible just beyond. You can see the staircases in the middle... 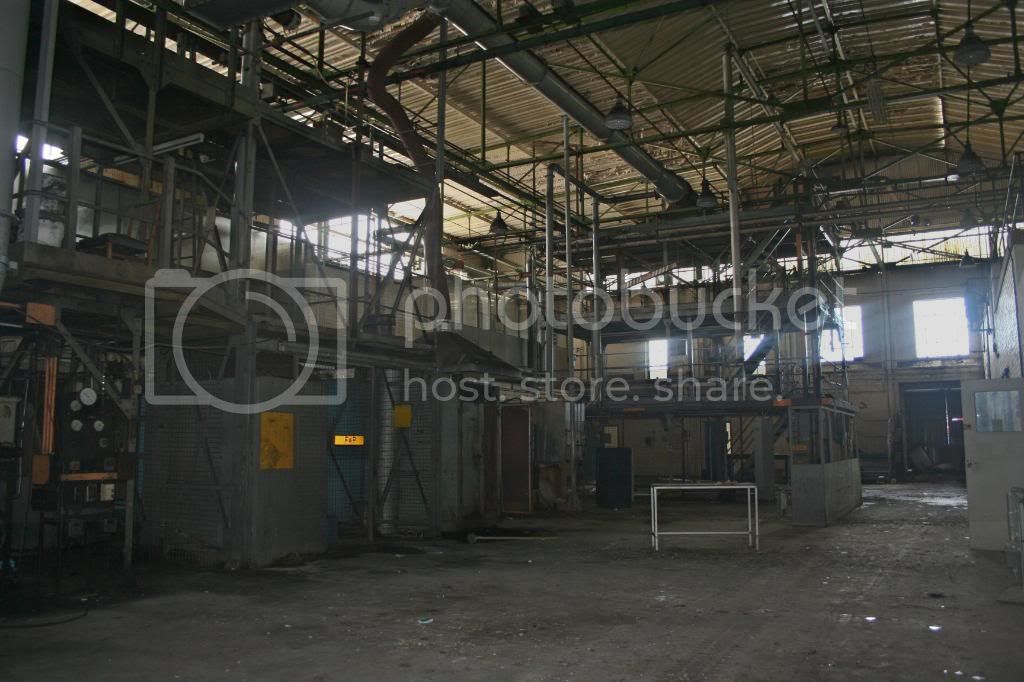 Then it was time to investigate the buildings that overlooked the factory floor. They were by and large stripped out - obviously just offices or floor managers rooms. 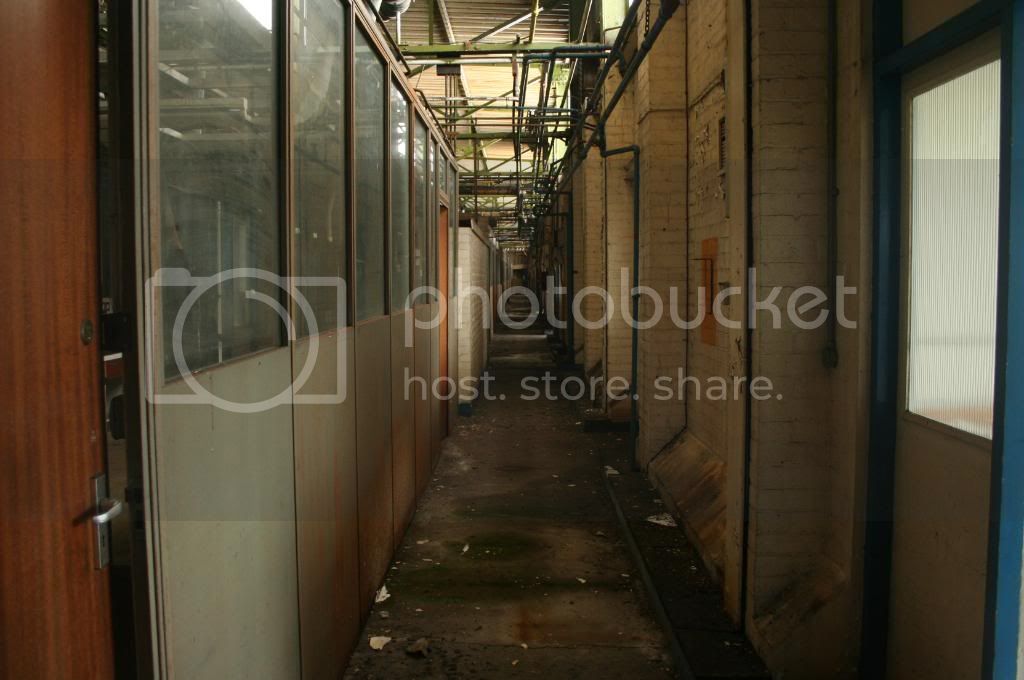 However, some contained what the CRE has a plentiful supply of - labs. 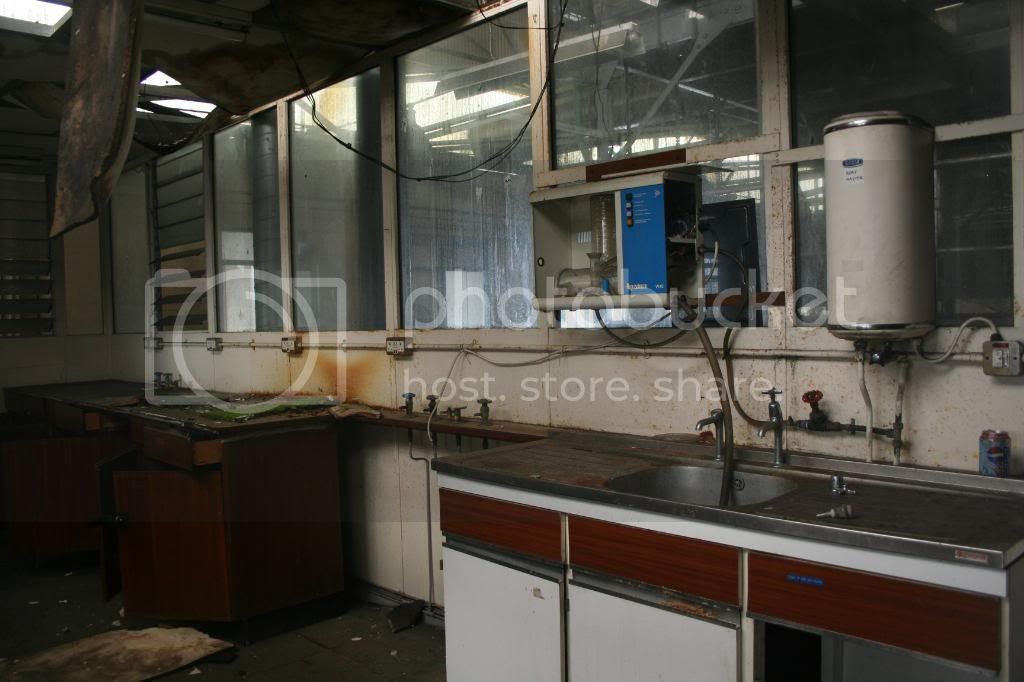 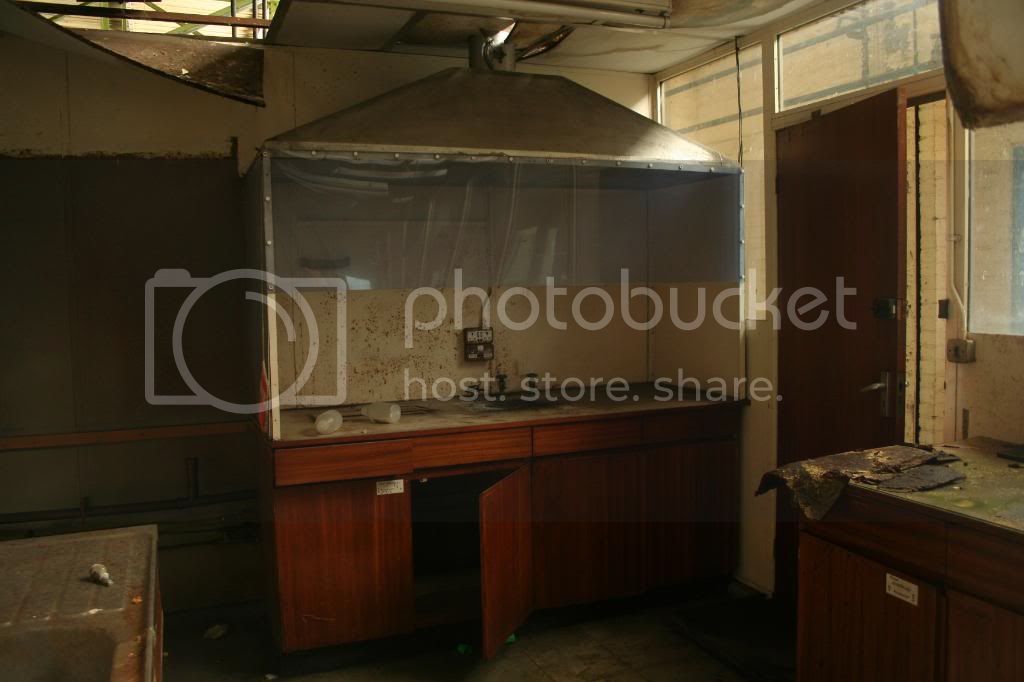 This odd glass spiral looked like some kind of distillator... 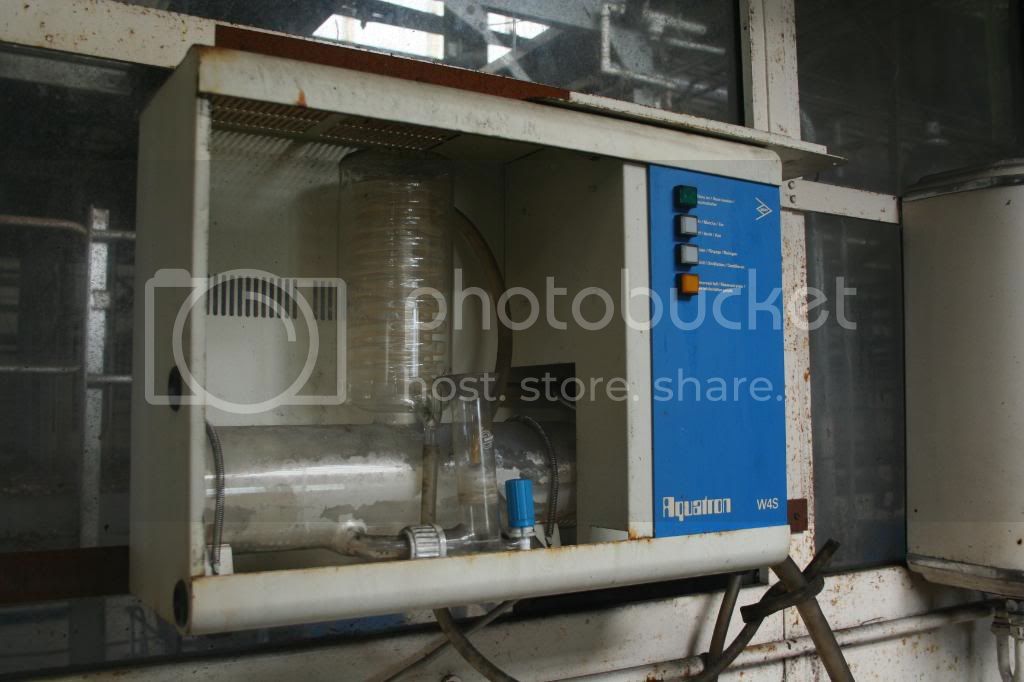 On the other side of the floor there were more offices and labs. This one does not overlook the factory floor; instead it overlooks the rest of the CRE. 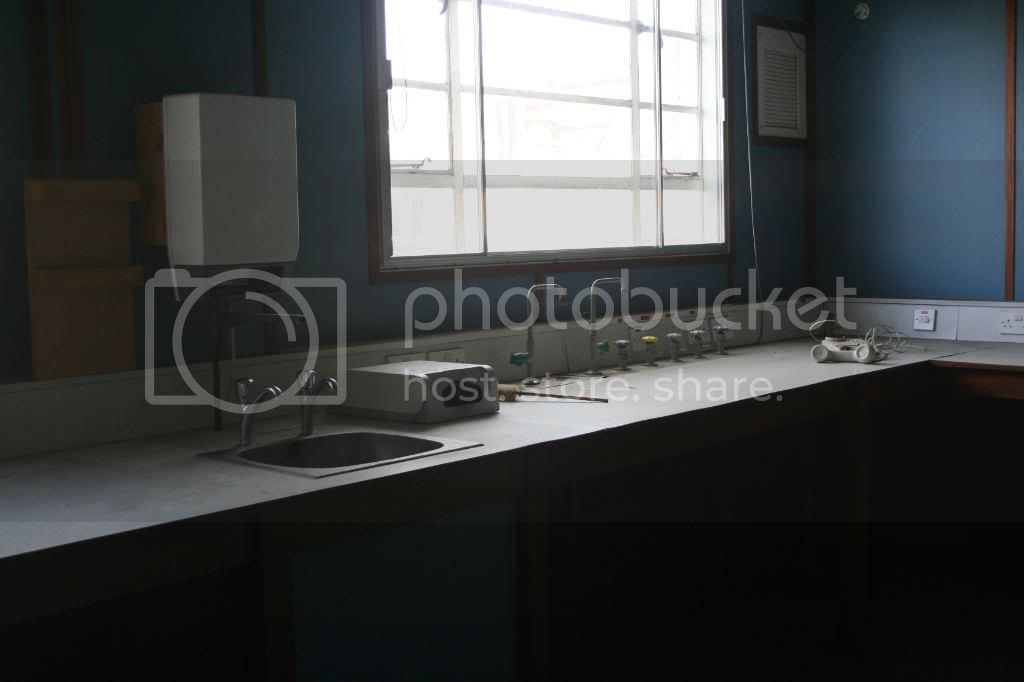 How many different gases do you need? 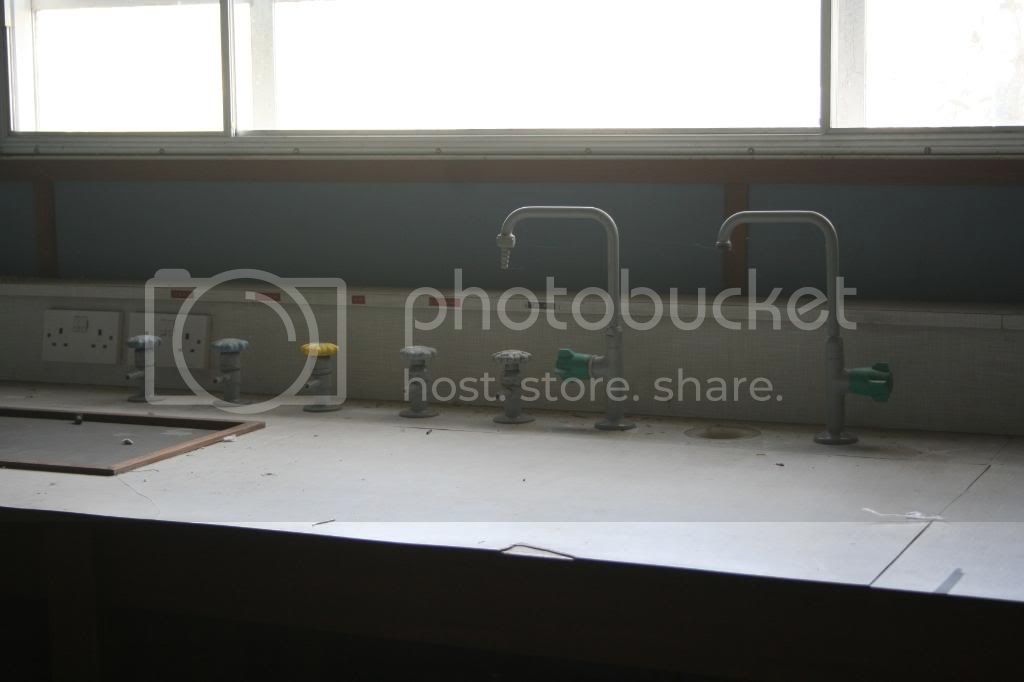 Another cracking trip out, I love this place!

Location
I stalk the fringes of humanity and dwell amongst

Nice bit of classic factory look there. The first aid door...at least it's easy to find if you're hurt.

Dystopia said:
Nice bit of classic factory look there. The first aid door...at least it's easy to find if you're hurt.
Click to expand...

it does take you by surprise when you first see it

Wow, this place is just so full of goodies!

Great to see more of it, clebby.
Fab pics and write-up.

Got to love some big industry

Its good your still getting back there and exploring the rest of the site. Nice work man

thanks for the comments everyone.
L

Last of the Geordies

Very interesting photographs. My Dad, Ian Campbell, used to be the staff and personnel manager there as late as around 1986 and I worked there in my Summer holidays when I came home from Leeds University. The coal had to be transported to Stoke Orchard by lorry from South Wales I was told. There were some very capable scientists there working on all sorts of projects. One of the goals was the dream of burning coal in a way which would be less harmful to the environment. Fluidised bed combustion of coal was the aim, and I think they succeeded in their tasks but Margaret Thatcher did not support the miners, and indirectly, the scientific research being carried out by the National Coal Board. The site was very well managed as far as I can recall and the grounds were meticulously planted and maintained. There were a few tall chimneys and a big lagoon with reed beds to filter our contaminated water.They also had a few houses which were built to test out products made from coal. There was also a very striking librarian and her kind assistant who put up with me over several months. The NCB had other research stations including MRDE at Bretby in the East Midlands.