This site has been in the works for so long, seeing that this isn't your normal multiplex that's gone bust leaving a small trail of the 90's in it's history. This cinema first opened it's doors in 1936, and as you'd expect was designed and built in the Art Deco style typical of it's era.

It's always been a prominent landmark along the monotonous London Road in North End, due to it's bold Art Deco style white Tower, standing proud over the entrance on the main street. I just had to see it's story before it met it's inevitable fate courtesy of Portsmouth City Council.

I'll get some more info on it as and when I can, research is slow as I can't find much on it, but I know it has a lengthy history. Anyway... 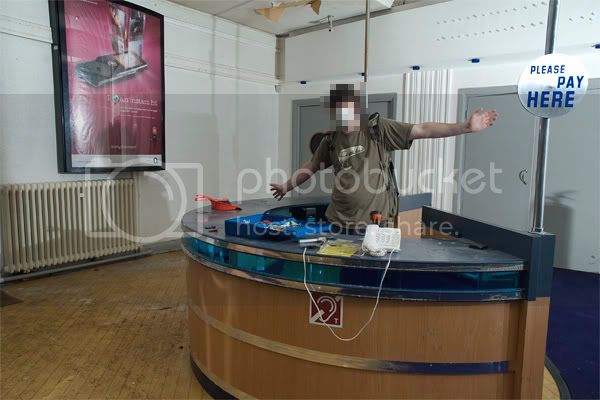 2. While obviously there's no signs of the original features here, it's still recognisable as the Odeon brand. 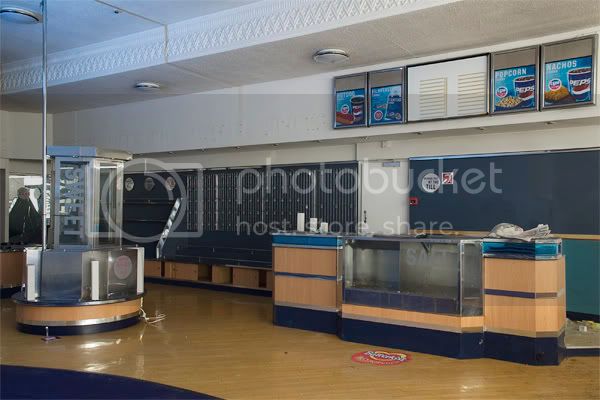 3. There's still a lot of the contents left in the building, the phone is even still active. 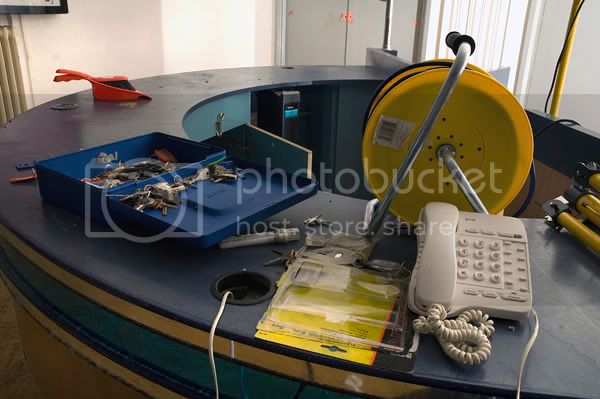 4. Inside it's landmark tower. On the exterior there are bold curves and chunky blocks, Art Deco stylee. 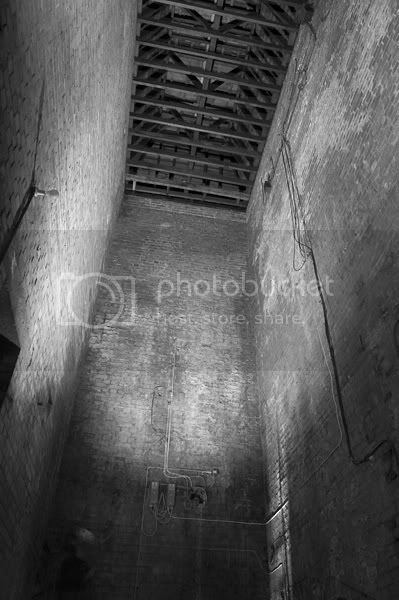 5. There's a few bits and pieces in there still. The ladders up to this section of the tower are actually IDENTICAL to the ones in the escape tunnels in London Road Tunnel Shelter, just 2 miles away. They were both built within 4 years of each other. 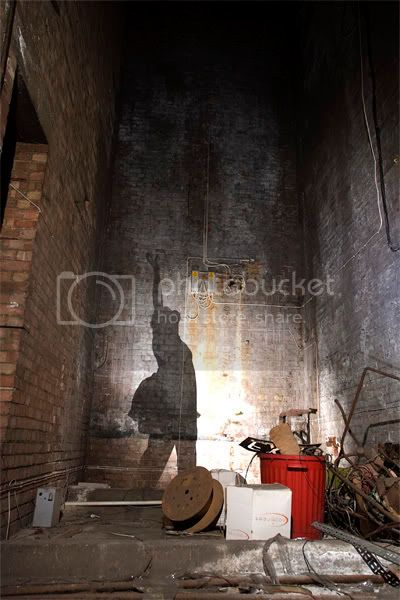 6. The projection room for Screen 1. While the projectors have been removed there still remains a lot of original features. 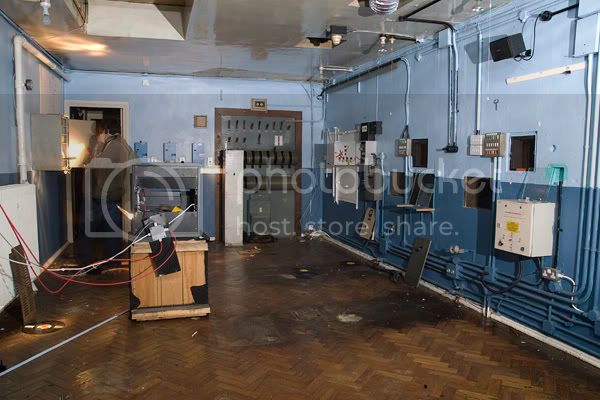 7. These awesome throw switches are no doubt originals. 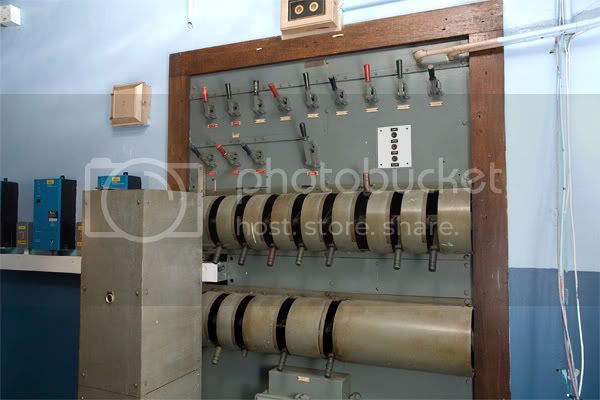 8. This particular film reel was a section of Robocop, I'm guessing it was a trailer. 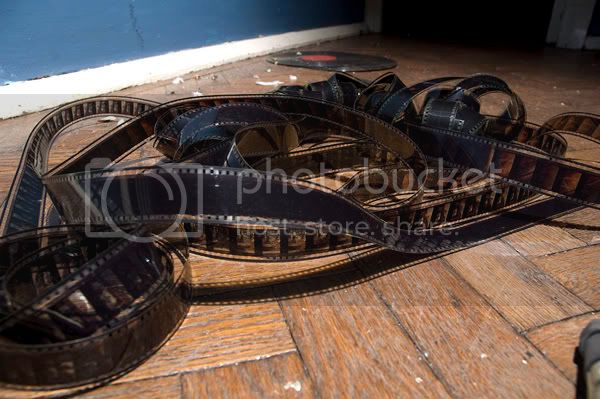 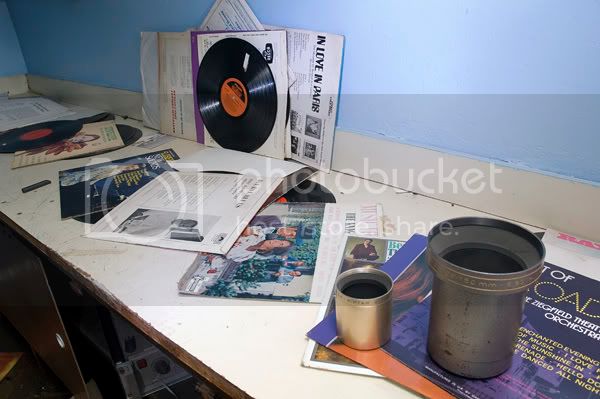 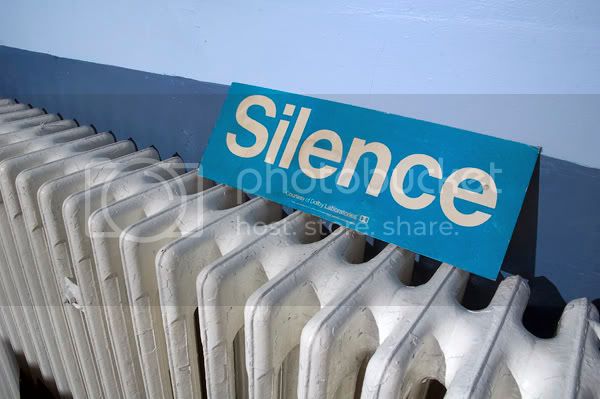 11. Probably redecorated in the 1960s, this room was full of spare bulbs of every kind. 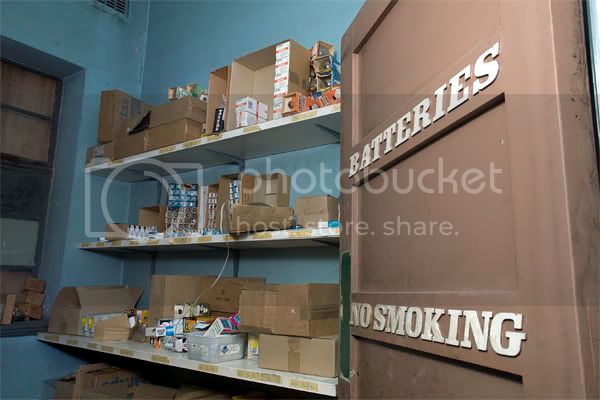 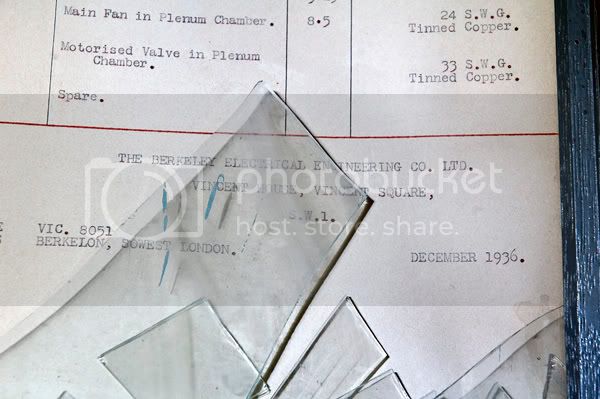 13. And the ventilation equipment itself! There's a lot more out of shot too, but in very cramped spaces that were difficult to photograph. 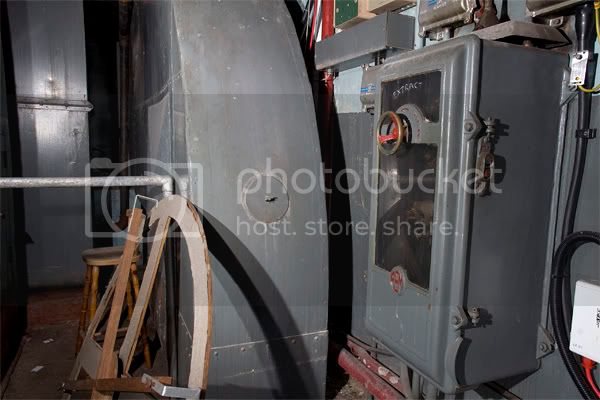 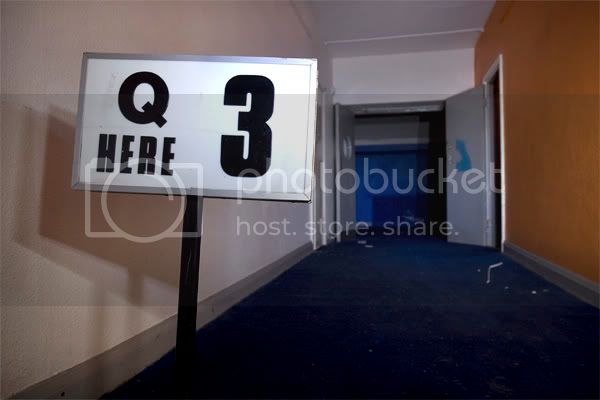 15. It was strange being back here, the last film I saw here was only 6 months ago. 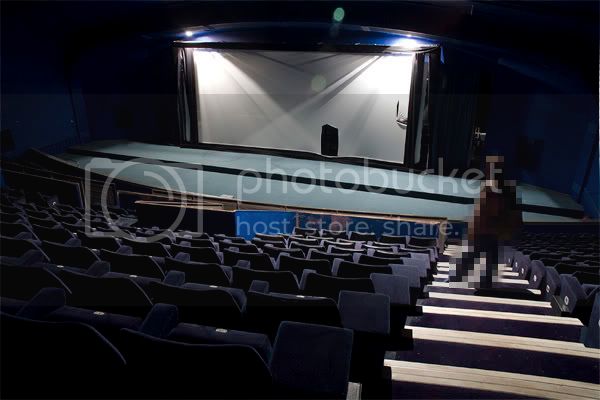 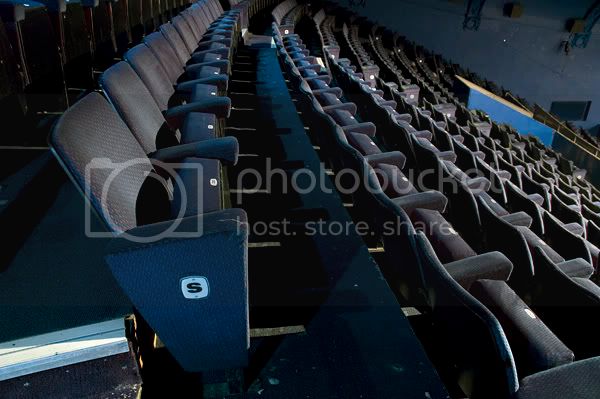 17. View from the main screen, looking back at the seating. Some of the lights were left on, others weren't. 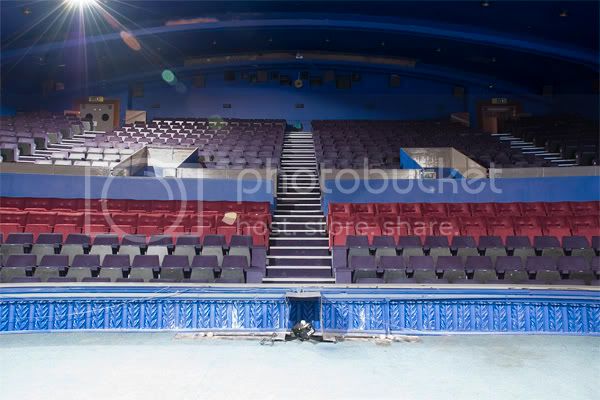 18. Behind the main screen, there were quite a few of these... Pretty big. 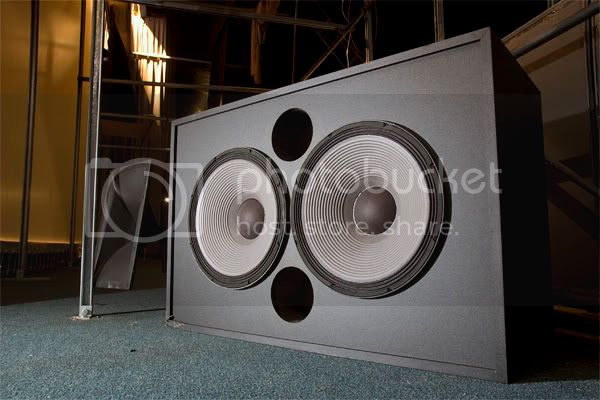 19. Behind the main screen. 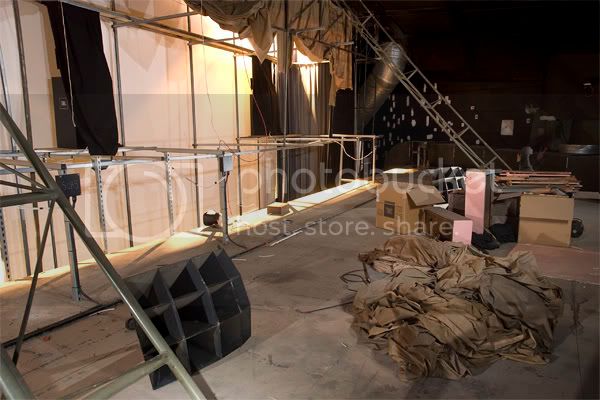 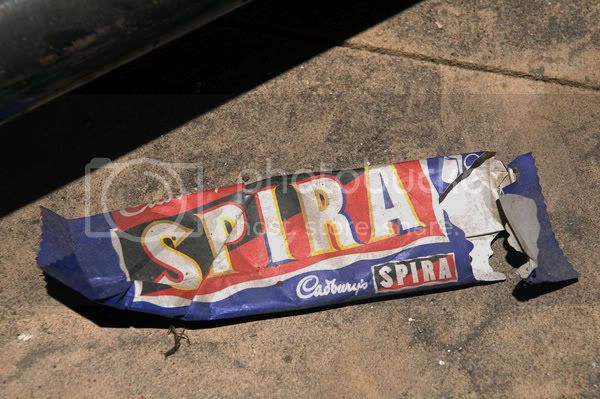 21. The projector room for Screens 2 & 3, a blend of fittings from so many eras it's impossible to even begin to describe. 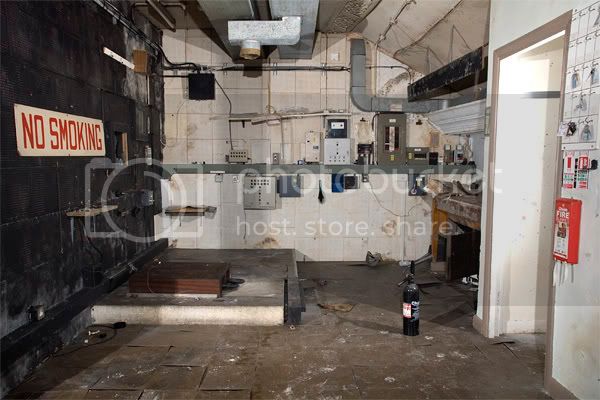 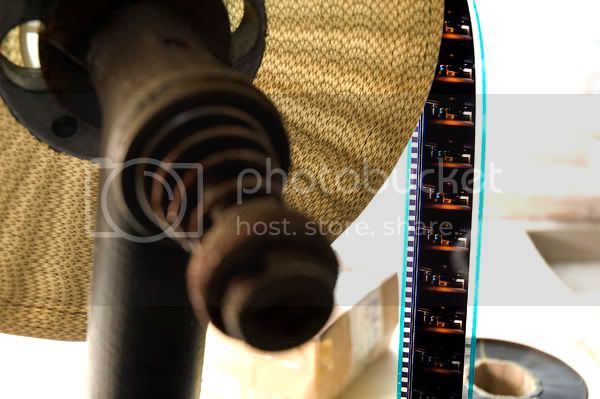 23. A phonebook completely covered in about an inch think mold. Note electrical diagrams. 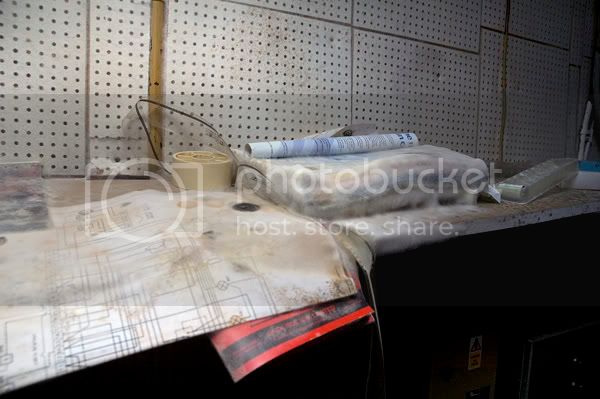 24. Screen 4. This place paints a better picture of why this place closed down. I don't remember this screen being open and now I see why, it looks like it'd been out of use for several years due to an incomprehensible level of damp. There was mold everywhere, all the carpets, seats and walls. 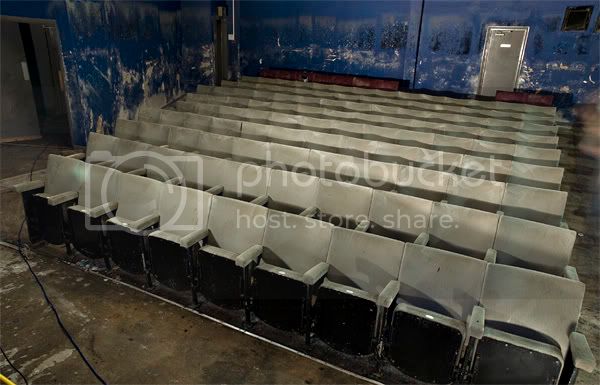 25. The carpets in Screen 4 were completely obliterated. 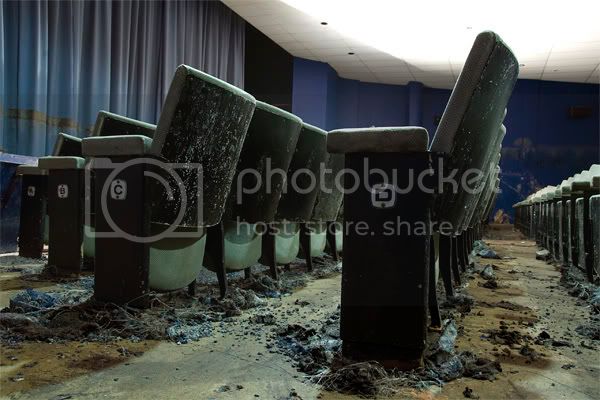 26. This corner was the source of the damp, there was an open drain with a constant dripping. Also note the strange fungi that looks like pasta! Never seen that before... The bin was half full of water catching drips too. 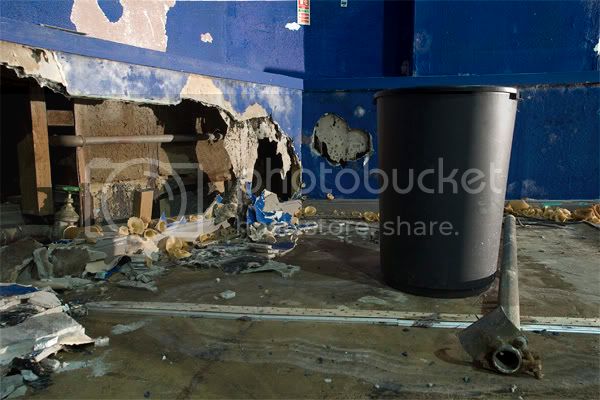 27. I guess there's only one thing left to do before making for the door... 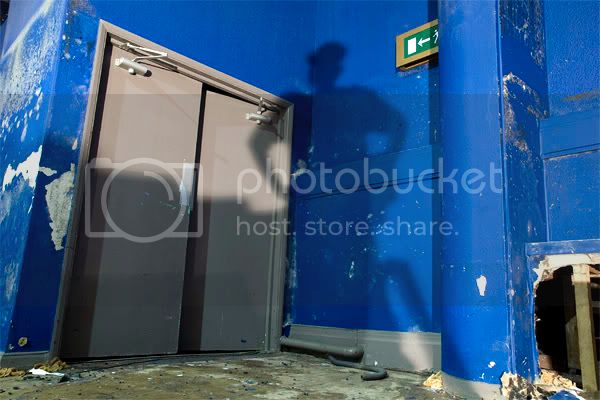 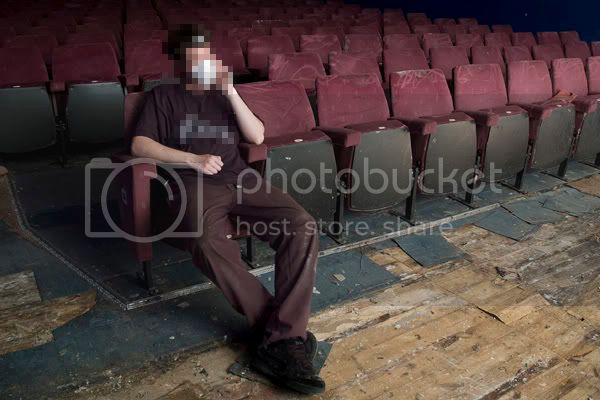 It's sad to see what is possibly the REAL reason as to why this once great cinema closed it's doors for good. The damp in the rear half of this cinema has absolutely destroyed it. The only way that it could have possibly been brought back to it's former glory would have been to have the entire interior stripped so that only the brickwork remained, then to treat the damp and start from scratch... It would have been a massive project for a fairly modest cinema with ever decreasing customers. It still would be... But I can see this place being demolished, especially given Portsmouth City Council's track record. Such a shame.
Last edited: May 15, 2008

i do like the old cinemas, great report and pictures there. thanks

i'm guessing when it was built, it was a single screen and has been converted by splitting the main screen seating area (which would've been two levels) into just one and the using the lower seating area to form two smaller screens. Similar to how the ABC in Liverpool was done.
D

Great report, Really nice look to this place. Like the old sweet wrapper and the throw switches are pritty cool. Good stuff cogito

Great report and Pictures....and I absolutely used to love Cadbury Spira's! Nice one

Great report & super pics! It's a bonus them leaving some of the lights on for you-when we did Bradford Odeon it was pitch black! This looks in better nick too! Screen four does look minging though! You can't beat a good cinema! Sorry to hear it's probably gonna go though! Keep us informed?

Very nice report - do you have any exterior shots?

I didn't get any exterior shots (typical of me )

But several can be found on Google Image Search.

Fantastic stuff, you got some good pics there. Love old cinemas.
T

Awesome! You've got to show me this place mate! Looks amazing!

Thanks for the exterior shot - beautiful building. I feel a trip to Pompey is in order..

And another cinema bites the dust! Very sad. Interesting report and excellent photos. Thanks for sharing. Tony

I'm guessing this photo would be from early 1949 then.

Also, here's a brief history of it that I've just come across:

One of the original Oscar Deutsch chain of Odeon Theatres. The Portsmouth Odeon opened on 14th December 1936 with Sydney Howard in "Chick". It was the largest and most expensive Andrew Mather designed Odeon of that year. Total seating was provided for 1,824, with 1,224 in stalls and 600 in balcony.

It has an impressive monolithic tower frontage in cream faience with vertical green bands and a roof of red Spanish tiles. The auditorium's ornate decoration included tall murals on side walls depicting film subjects.

A two week closure from 10th September 1960 for modernisation, including installation of 70mm with new wide screen and proscenium in front of original. Then began a glorious period through the 1960's of almost uninterrupted Roadshow presentations (with the Gaumont almost opposite taking the Rank first-run weekly release).

In 2007 the Freehold on the building was sold by Odeon Theatres Ltd and after a few false roumors of closure, the final performances were held on 10th January 2008. Demolition is possibly the final act, still to be played out.....
Click to expand...

Great report and photos, cogito. The main screen's fab and I love the ventilation room and switches. Interesting stuff!

Nicely done, i'd have a Cinema-gasm after exploring that lot!

great report, I love seeing the old photo to compare to the new, so sad they can just knock down an old art deco building

Just spoke to a guy i know from the council and the front of the odeon (the tower) is a grade one listed building so whatever they have planned for that site the tower has to be part of it due to the art deco style, ps that shot of me at the counter is not good, im all hot and sweaty and fat looking lol


And the live plug socket two spot lights and a 50m extension lead was the cream on the cake!
Last edited: May 24, 2008