I'm sure everyone out there has local places that they like to keep half an eye on from time to time, places that have eluded you in the past but you keep checking 'just in case'.

This is one of those places. In a county that is extremely sparse for abandonments, finding out that this school had closed was music to my ears. The Parklands Campus began life as a 19th Century manor house, built on the same land as a much, much earlier 12th Century house demolished in the late 1700s. It later became Bessels Leigh School, a boys boarding school, and had various additions constructed in the 1960s. The school closed and the building was taken over by the charity Action For Children in 2009 who reopened it as the Spires Academy, rebranding as Parklands Campus in 2011. It then closed in 2016 and has been empty since.

I had gone past this place innumerable times over the years as it's on the route I take every other Sunday to go film the racing at Standlake Arena. I had noticed the lightbox out front was empty on one journey but didn't actually end up checking it out the first time until the beginning of this year. We turned up and immediately saw a very active and visible security team based in one of the former staff houses on the main drive, complete with a dog unit van and very loud barking dogs somewhere. We had a nose around the perimeter but sacked it off as neither of us fancied getting chased by pooches. After that day, every time I went past it I'd crane my neck to try and see through the trees if the dog unit van was still there and it always was. That was up until a couple of months back and suddenly I saw it had gone. Me being me I then swiftly forgot all about it as other things came up as they do, but at a loose end I thought why not go have another look. Sure enough walking up the perimeter the dog unit van had gone and all the staff houses doors were boarded up, result. We also noticed a new deterrent in a number of CCTV cameras perched in the trees complete with loudspeakers and what I presumed were PIRs or IR lights or something, but more on that later.

We got into the site the way I'd noticed on the initial scout around the outside and began taking some tentative steps towards the more modern buildings at the rear. No cameras on any of them, all good. However I had noticed on the route up that the manor house itself was positively swimming in cameras mounted on every corner and at strategic points around the perimeter. All of them were wired into somewhere and all of them looked fairly new. To my surprise we found one of the more modern buildings open although it only contained the laundry room and a couple of art classrooms. We snapped a couple of photos in there then thought in for a penny and all so decided to just be blatant and see what happened when we walked around the outside of the manor house. Nothing, not a squeak from any of the cameras or alarms or loudspeakers. When we found an easy way in we thought it was too good to be true, personally. In we went, and to my disappointment the whole building was gutted and looked to be having renovation work done on it. I thought to myself the best part will be the entrance hall so we made a beeline for that part. After setting up my camera I looked up and realised there was one of the same sets of cameras, alarms and loudspeakers pointed straight at me on the corner of the wall. Fuck I thought, oh well, the room was spectacular so even if it goes tits up now at least I've seen the best part.

I decided I wanted to see the room from the gallery running around the top so headed up the stairs and realised there was another camera setup looking straight at me up there. Just as I had taken the photo I wanted things went a bit Pete Tong. I heard a crackle and then suddenly a booming voice came over the loudspeaker and said "Will the two people taking photos please leave the site immediately. Security are on the way".

Fuck, I thought, well the luck had to run out at some point. The whole rest of the building looked gutted and uninteresting and we'd got the main prize so in an effort to appease them and avoid a possible encounter we wandered off and out the way we came. As I was taking an external shot the same voice came over again and told us in no uncertain terms to get a move on, so with a quick cheery wave after that we were gone.

I might go back for another poke around but I've no idea how long it'll remain like this. The cameras are definitely monitored to a degree however it's only the internal ones that seem to get picked up on by the security, and they are placed in the only really good part! It's been a while since I've walked into a room and had a 'holy shit' moment but walking into the entrance hall was one of them. 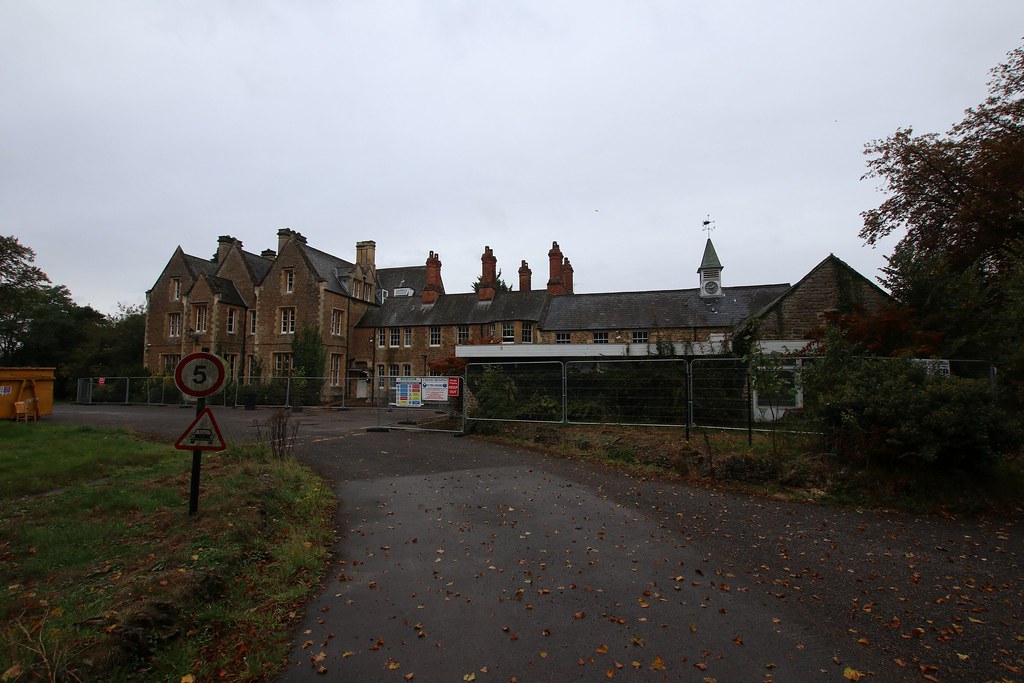 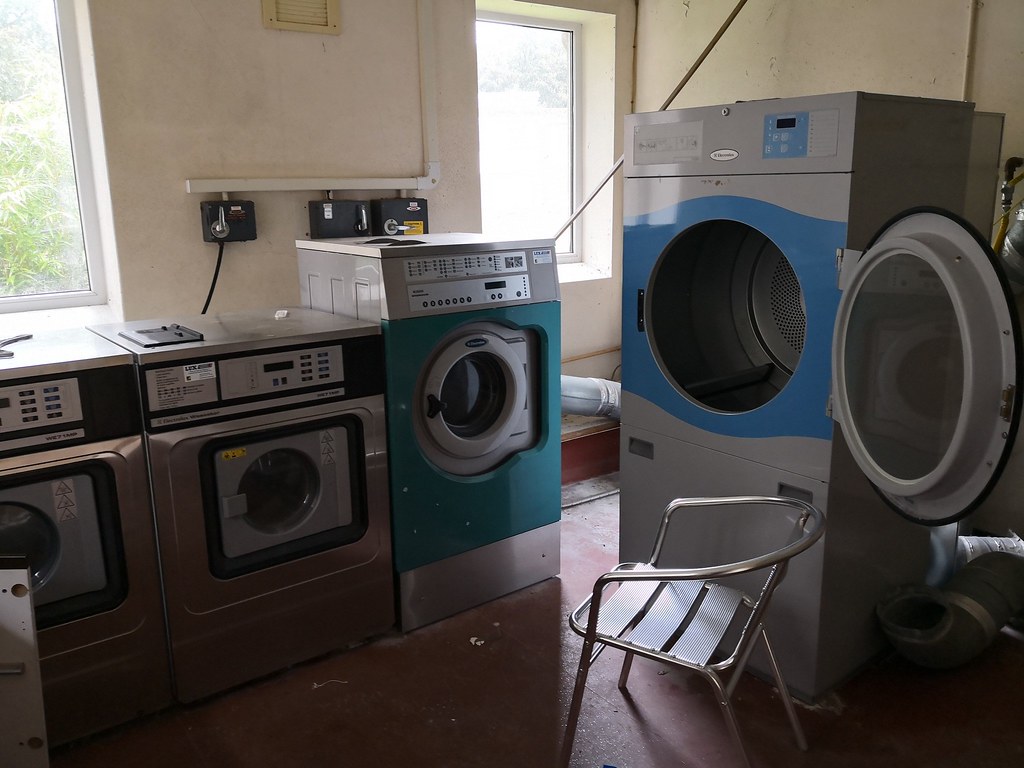 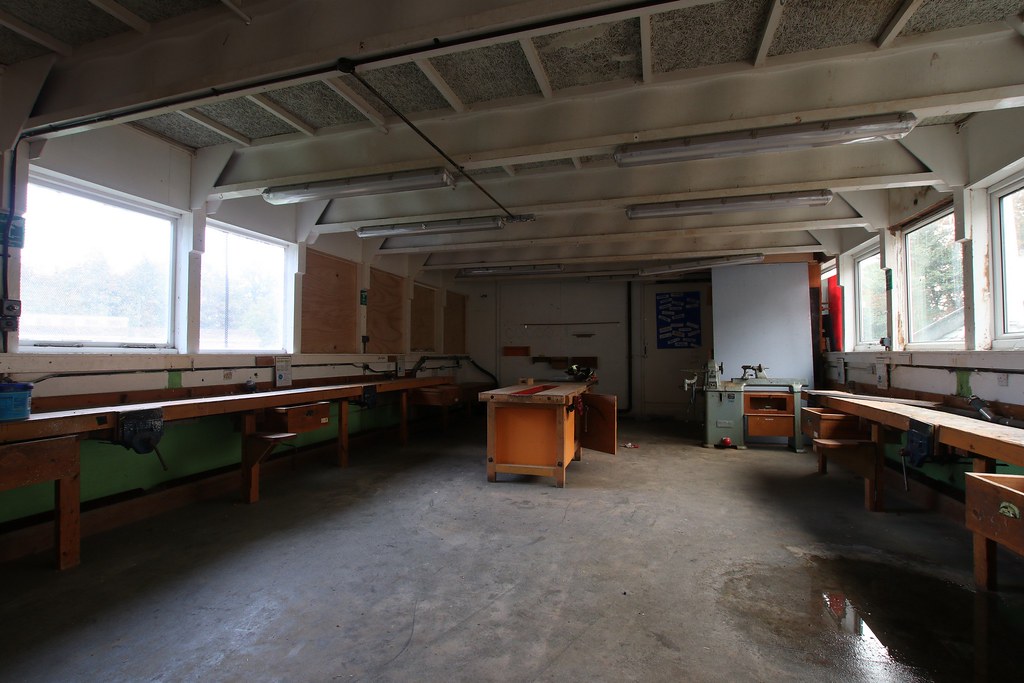 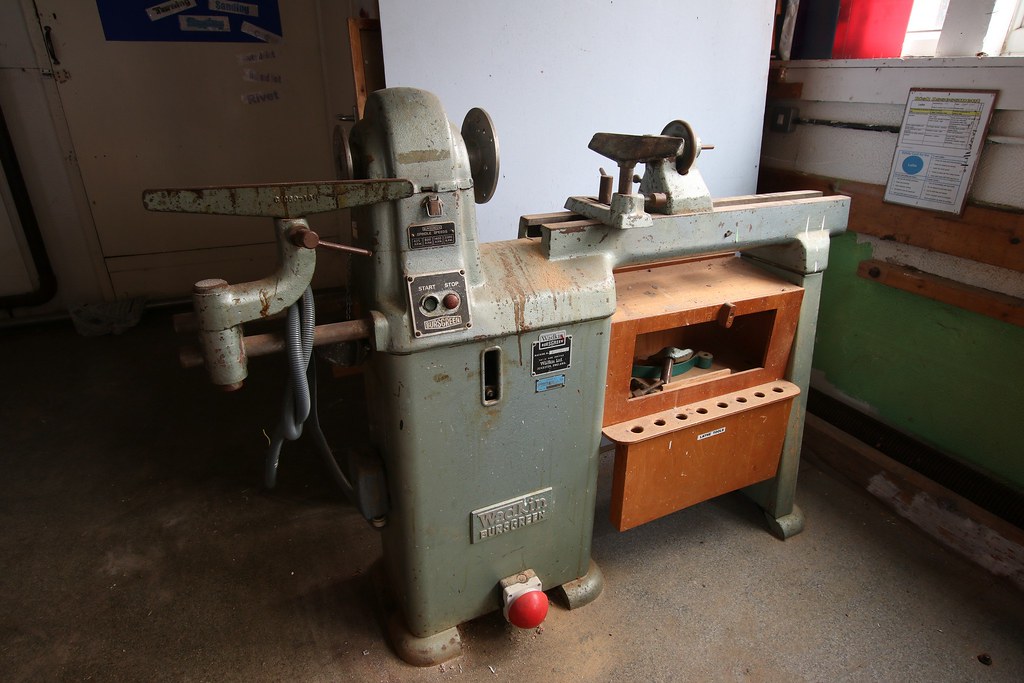 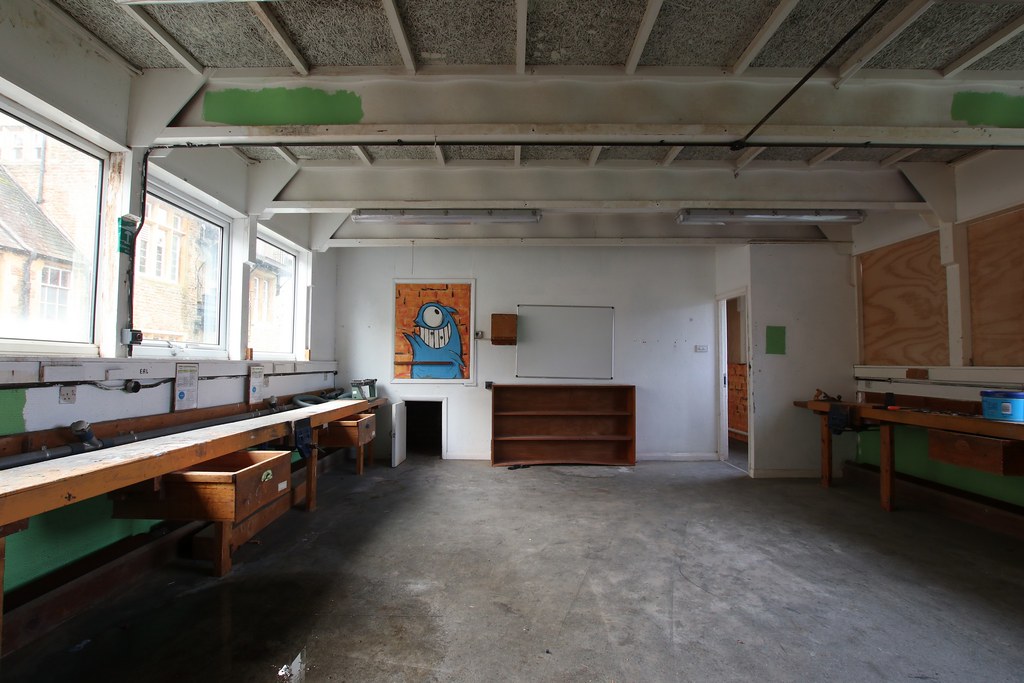 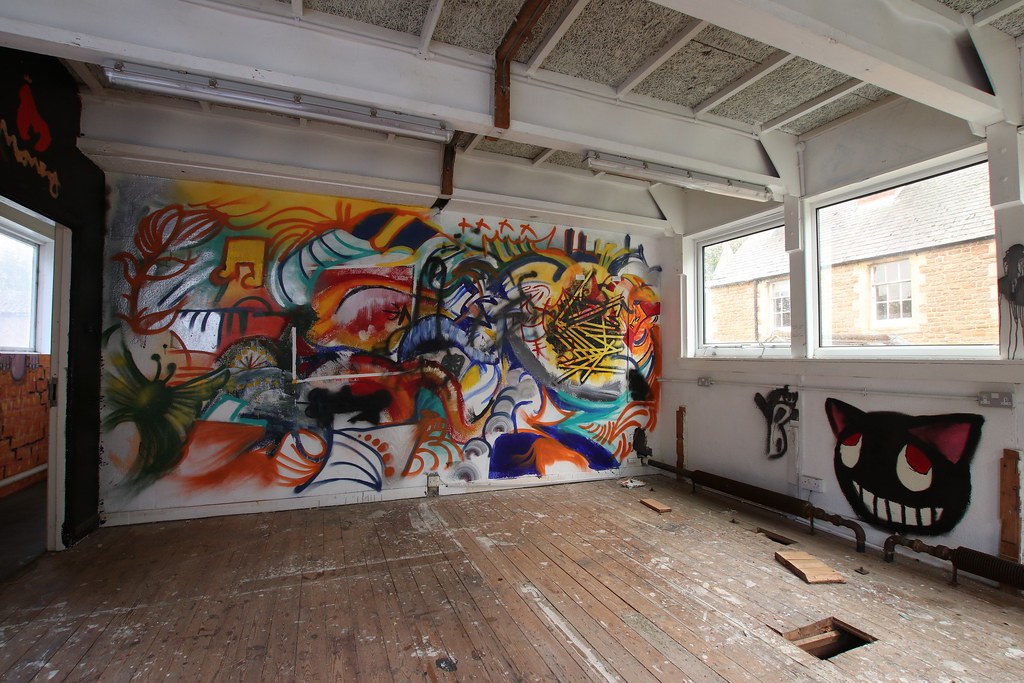 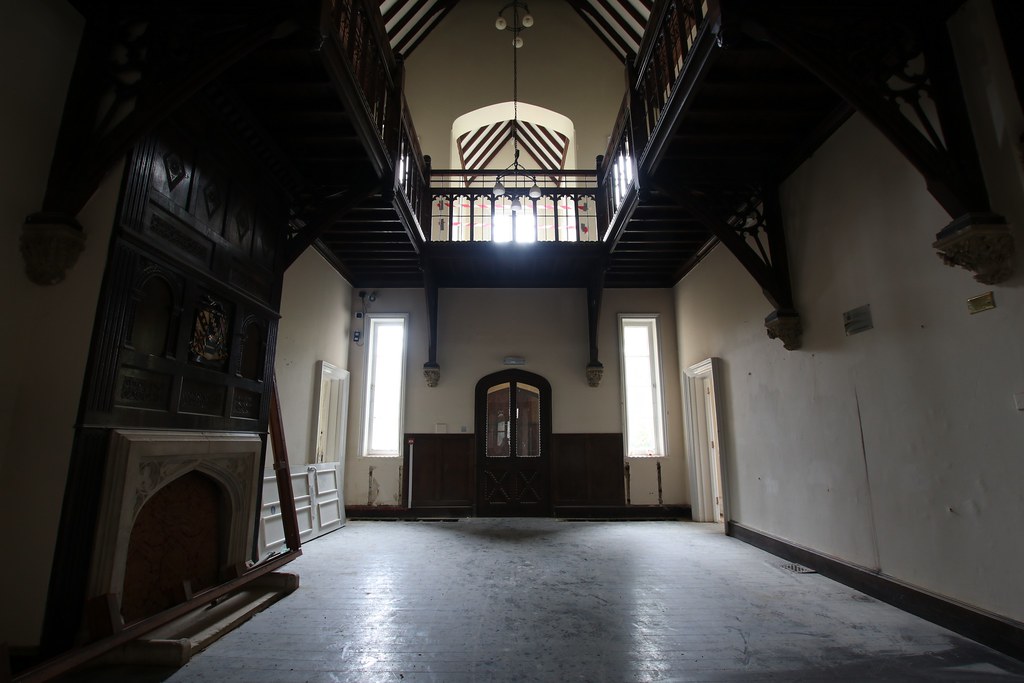 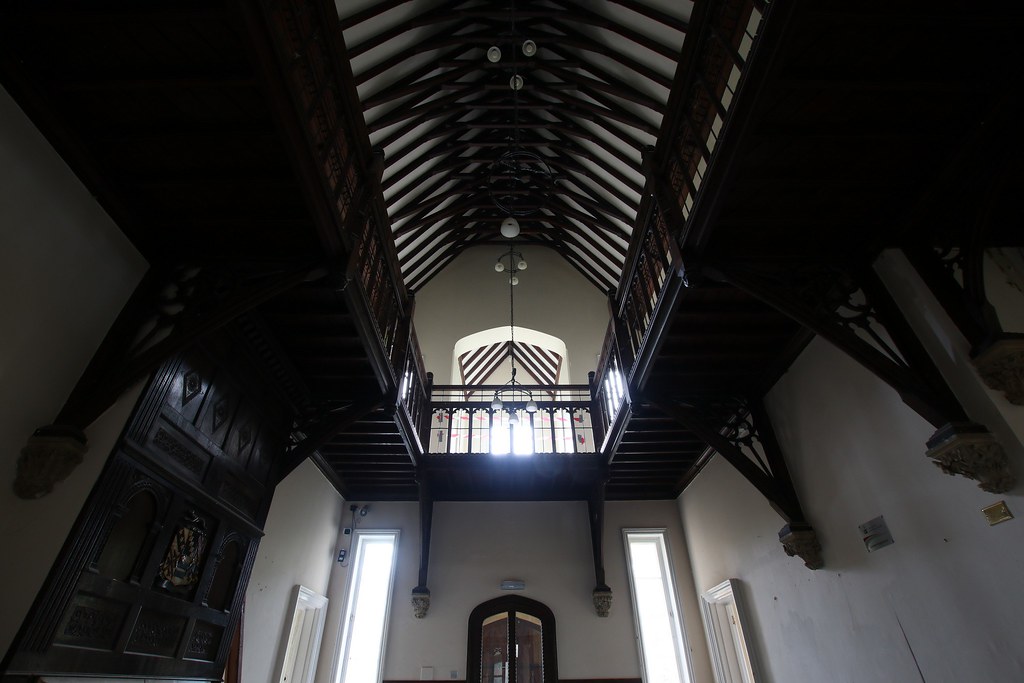 The camera on the upstairs balcony was the one that crackled into life.... 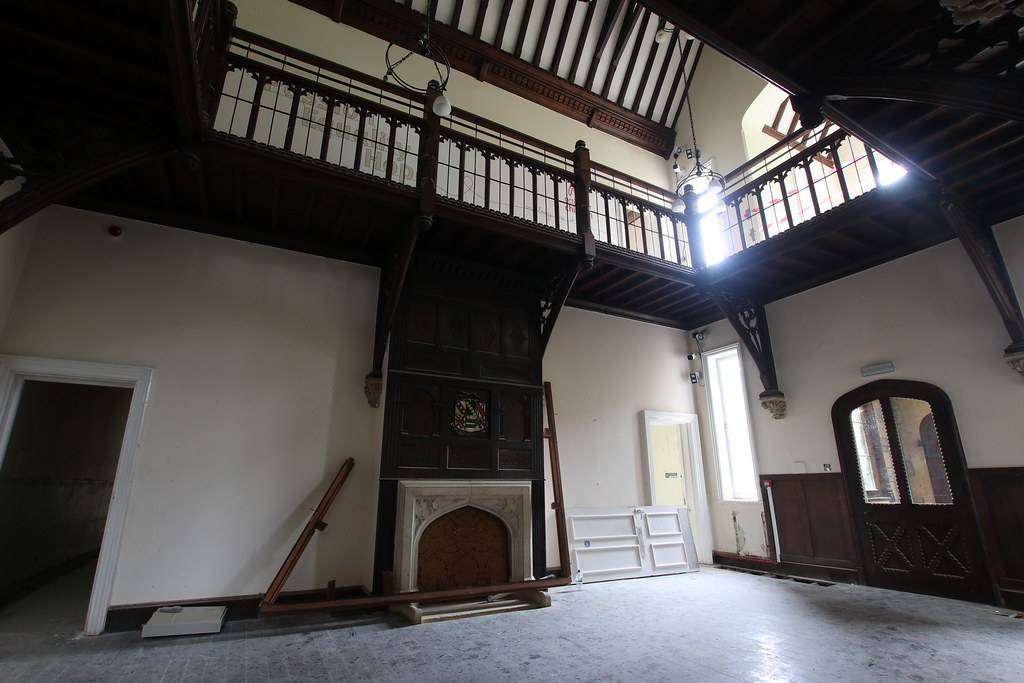 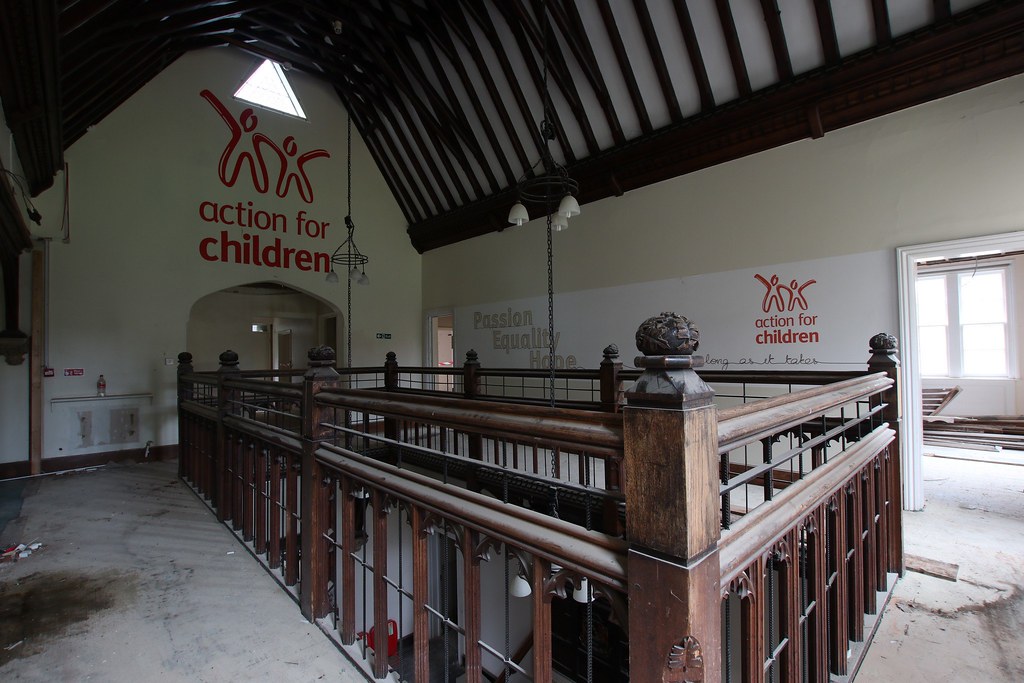 Thanks for looking as always ​

Lol. I got told off by loudspeakers for walking round an old headstock and that was bad enough. In an enclosed room it must be a bit unnerving. Good work though mate.

HughieD said:
Lol. I got told off by loudspeakers for walking round an old headstock and that was bad enough. In an enclosed room it must be a bit unnerving. Good work though mate.
Click to expand...

Awesome stuff mate; as always!
Love this: "he same voice came over again and told us in no uncertain terms to get a move on, so with a quick cheery wave after that we were gone."

That hall is special, at least you got a few minutes in it!

Nice building that. Liking the main hall photos.
The use of loudspeakers reminds me of the Houghton Grange.

What you managed to get is nice. I like the Wadkin Lathe and the hall.

Mikeymutt said:
Ha ha I love how they more or less gave you a chance to get out
Click to expand...

part of me wants to go back to see if they've sealed up the way in we used but I don't think we'll get this lucky again with the exterior cameras!

Nice one I like the warnings given to get out over loud speakers, not doubt no one was coming and they were sat with their feet up watchingand laughing their heads off

night crawler said:
Nice one I like the warnings given to get out over loud speakers, not doubt no one was coming and they were sat with their feet up watchingand laughing their heads off
Click to expand...

I am certain they will have sent someone out to check how we got in, they've taken the security pretty seriously here in the past so wouldn't surprise me.
S

Hi all, I went to that school before it was changed to what ever it was there.. when I went it was called Besselsleigh school. Looking at those photos it looked destroyed, by any chance was the pool or the sports hall still standing and or the building behind the hall or even the white building at the back of the property.. I would also suggest if anyone goes back to take the back way into the property if its still open as that's how we used to seek out at night. Lol

Dude that was back in 2018 the place has been changed into something else now. I took these photos from the church nearby when I was there in April. What the heck is that pillar in the first photo. If you visit now your more likely to get told to clear off by some one living there.