Whoah! Check this link out

Yet another site I drove past loads on my way to the docks,always meant to stop and have a look on the way back- never happened though!

chizyramone said:
Yet another site I drove past loads on my way to the docks,always meant to stop and have a look on the way back- never happened though!
Click to expand...

Exactly the same mate, definately remember there being lots of submarines all lined up waiting to be scrapped!
F

statler said:
Exactly the same mate, definitely remember there being lots of submarines all lined up waiting to be scrapped!
Click to expand...

As far as I know of the last two subs left there, one was acquired by a german museum and is on display in a harbour: http://uk.geocities.com/majorsnowdon/galmisc/otis.html

And the other was involved in a proposal to make a pretty cool sculpture: http://www.drydockart.com/oberon/Oberon Web Pictures/OB Pictures 1.htm

Seems to be some confusion over the names, the one that went to germany was definitely Otus but the other one may have been osiris or opportune or oracle, according to wikipedia Osiris got sold to canada but according to that sculpture site and the portsmouth news, osiris was the last one to be sat there, but it was widely reported that the last submarine to be at pounds was lost under tow to a scrapyard abroad and was called Oracle so god knows!

But alas, the first time I went there to take pictures I was over cautious and thought I had explored the whole site and realised on the way back home that I had missed them both thinking they had already gone!

The next time I was there they were already gone, bugger

The place gradually got more sparse over the years but even as recent as the mid 90's there was still a lot to see, I found this photo a while back and it must have been taken close to an occasion when I went past in the car with the old man because everything in the picture I remember seeing

You had the MV brading (the ferry), 3 lightships, a couple of subs, what appeared to be a frigate or some other fairly large navy ship as well as loads of other ships and tanks and I even saw a traction engine

The best thing I saw was probbaly the remains of "hms p556" that was often mistaken for a uboat but was actually an american sboat, unbelieveably it survived at pounds yard in varying forms from 1947 till some point in the early to mid 90's

Some people might remember it being on the LEFT side of the m275 going into portsmouth, laying on it's side and orange with rust and full of holes!

Pictured here in situ at pounds

Id love to have seen that place with sboat in place!

I bagsy the Chieftain...

Awesome pics, mite have to try and visit one day.
S

Nice pics although I am sure I have seen them before

Why would Harry Pounds scrapyard want to foil a rescue attempt?
C

Nice pics from a great site, visited there in 2005 for a shoot with Digital Camera Magazine. As and when my other external drive makes it out here I'll try and get a few pics up.
P

Are the public allowed in Pounds?

We are looking for somewhere cool for a band photoshoot.
P

Cool as in interesting/ different.

Any idea if we can go in there for an afternoon?

I used to spend my summers each year in the 80's outside of Waterlooville so I was frequently in Portsmouth and Southsea and also remember seeing some diesel submarines there for scrapping. I have a picture around somewhere which I'll upload as soon as I find it. If I remember correctly there were also some old minesweepers.

Been meaning to go down there and have a look.
See it quite regally when we go over to Portsmouth town.
A

Puppet said:
Are the public allowed in Pounds?

We are looking for somewhere cool for a band photoshoot.
Click to expand...

"ALLOWED" ?
You are a member of this forum and you say the word "ALLOWED" ?

I had found these pictures some years ago.

A couple of old diesel subs at Pounds for scrapping. These would have been "Oberon" (??) class submarines?

I may be wrong but I can recall seeing HMS Blake moored in Portsmouth harbour in the early 80's before she was sold for scrap.
B 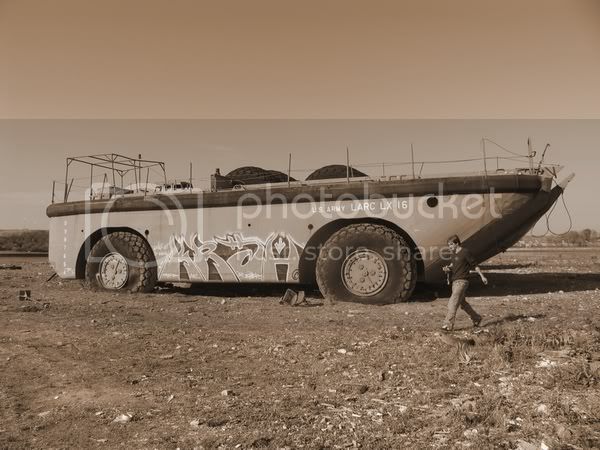 I could so use one of those L.A.R.C. craft - make commuting so much more fun

I remember them! one of them somehow got the front end of it smashed in while being moored up there.
Click to expand...

little known fact: the painted cheiftain was used in a music for a girl bands somewhere around 2002 but i can't remember what the band was.... might well have had "girls" in the name. 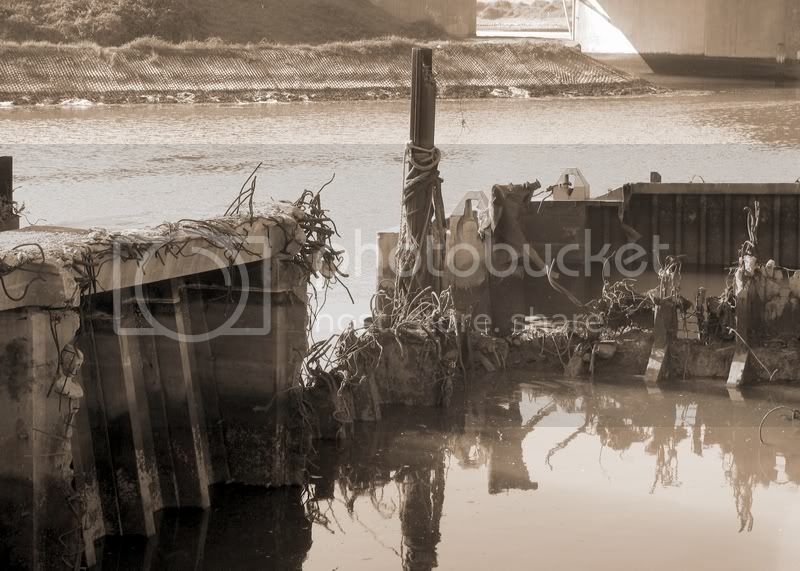 
james.s said:
Is this the remains of HMS handy then?
Click to expand...

interesting subject as me and my brother thinks it maybe a section from a mulbury harbour, will have to try and find out
W

i remmber going on a school trip many may years ago and driving past this yard and i was fasinated, but until recent years of seeing reports on this place ect, i never knew what this place was or where exactly i had seen it.

it was in the very early 80's i saw this and recall seeing a couple of submarines moored up and loads of boats and ship just ran aground.
K

ace explore, i spent a lot of time in pounds scrapyard as a kid (with harry's permission) i loved exploring that place!