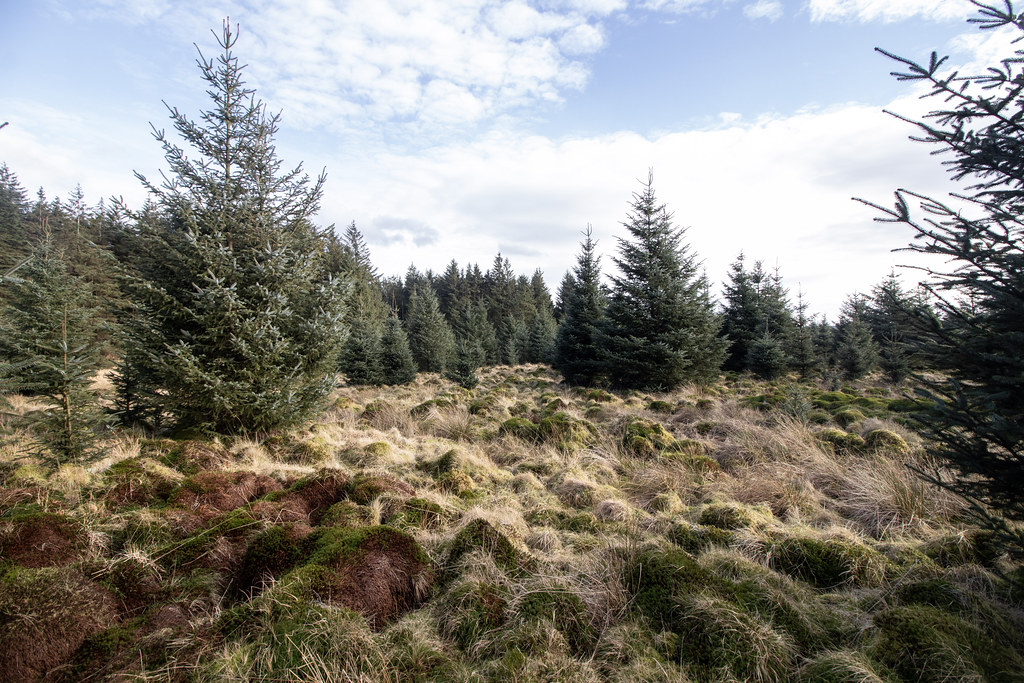 RAF Spadeadam is an active Royal Air Force station in Cumbria, close to the border of Northumbria. Covering 9,000 acres, it is the largest RAF base in the United Kingdom. It is currently used as an Electronic Warfare Tactics Range, to train the Royal Air Force and NATO allies. It is also the only mainland UK location where aircrews can drop practice bombs. Spadeadam has always been a remote and uninhabited part of England, until 1955 when the Intermediate Ballistic Missile Test Centre was constructed for the Blue Streak missile project – a project that was launched to develop a nuclear deterrent missile. The RAF took over the base in 1976 and under their control it became the Electronic Warfare Tactics Range in 1977. The range itself contains ground-based electronic equipment, including some that was manufactured in the Soviet Union, that create simulated threats to train aircrews. Across the site there are different real and dummy targets which include an airfield, a village, portable buildings, tanks, aircraft, anti-aircraft guns and vehicle convoys. The site was originally used in secret as part of Britain’s Cold War nuclear weapons programme. This information was only made public in 2004 when tree-felling work uncovered the remains of abandoned excavations for a missile silo. Since then, the RAF and English Heritage have attempted to survey the site and record what was so secret about the place, because there are no official records or plans for the base still in existence from the Cold War period. What is known, however, is that Spadeadam was chosen as a launch site because of its isolation, access to road connections and the surrounding environment which supported it with plenty of water. It is thought that Spadeadam was meant to be one of sixty launch sites across the UK, but most of these were never built. This report is based on the practice airfield area of RAF Spadeadam. It is hidden away in a small forest and completely surrounded by a peat bog. The airfield itself comprises a triangular shaped runway which features a number of aircraft (mostly MIG fighter jets), military vehicles and anti-aircraft guns.

This was easily one of my favourite explorations I have ever done and I think the rest of the group would say the same. It's clearly apparent why this place is so special to @Olkka and I can only thank him for steadily persuading us to visit over the past couple of years. Besides the dated fighter jets and vehicles, the scenery and isolation around the location is incredible with beautiful, natural landscape that is truly breathtaking. The lack of phone connection takes you away from the modern world to a point in time where a hand drawn map and memory was what lead us to the correct area to see the military aircraft and more. We came very close to visiting in December whilst up north but the weather put us off. After a morning venture in a Scottish town, heading back to England positioned us in the perfect region to visit and the sun was high in the sky, providing a purple sunset after we had fulfilled the mission.

Driving up to the rural parking spot, the only signs of life we spotted were sheep and cows, before completely going off the grid and heading west towards a distinct part of land we had in mind. Despite Google Maps being outdated over the base with deforested woodland, we crossed forests, rivers and marshes until we came within touching distance to the first set of planes. From here, we just allowed to explore to take us and we were properly spellbound. 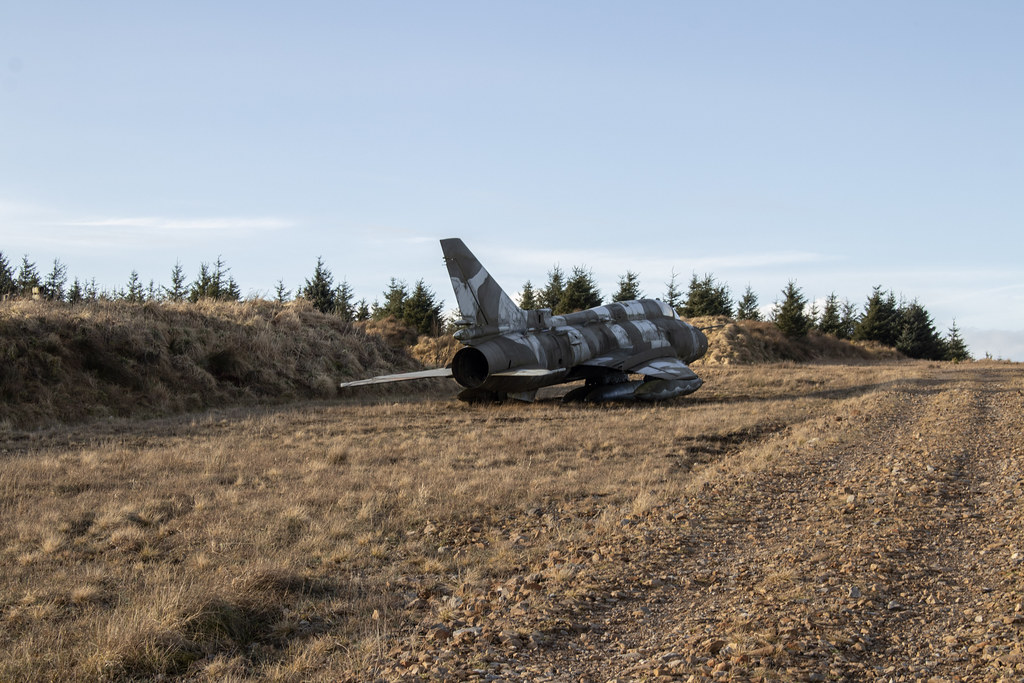 Sukhoi 22M, developed for the Soviet military but this one would have flown for the East German Air Force. Personally, my favourite with it's size and camouflage design. 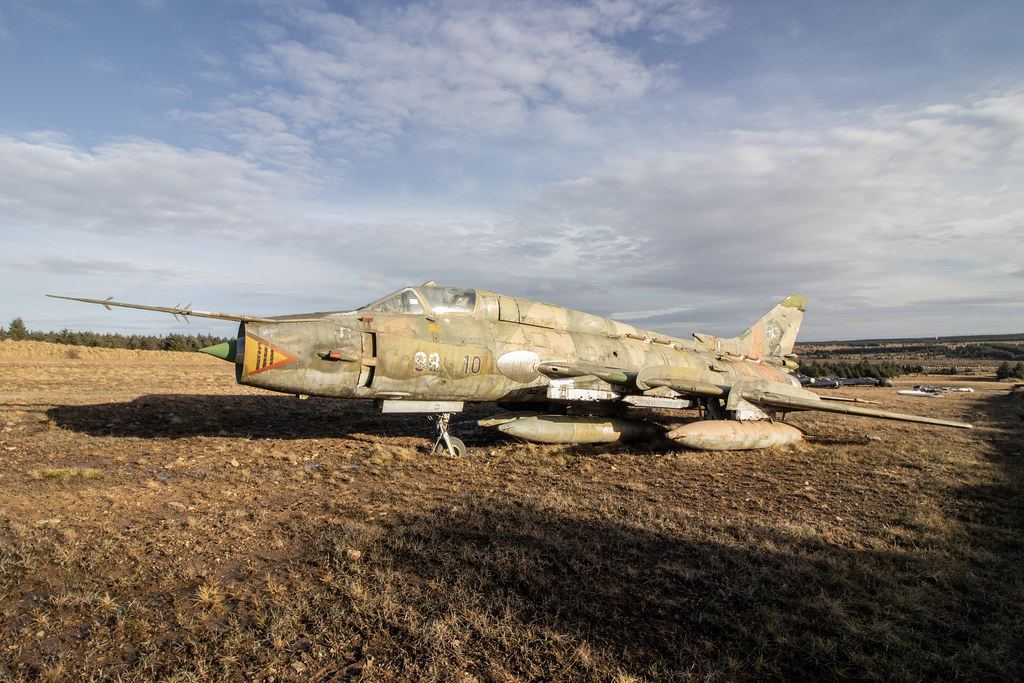 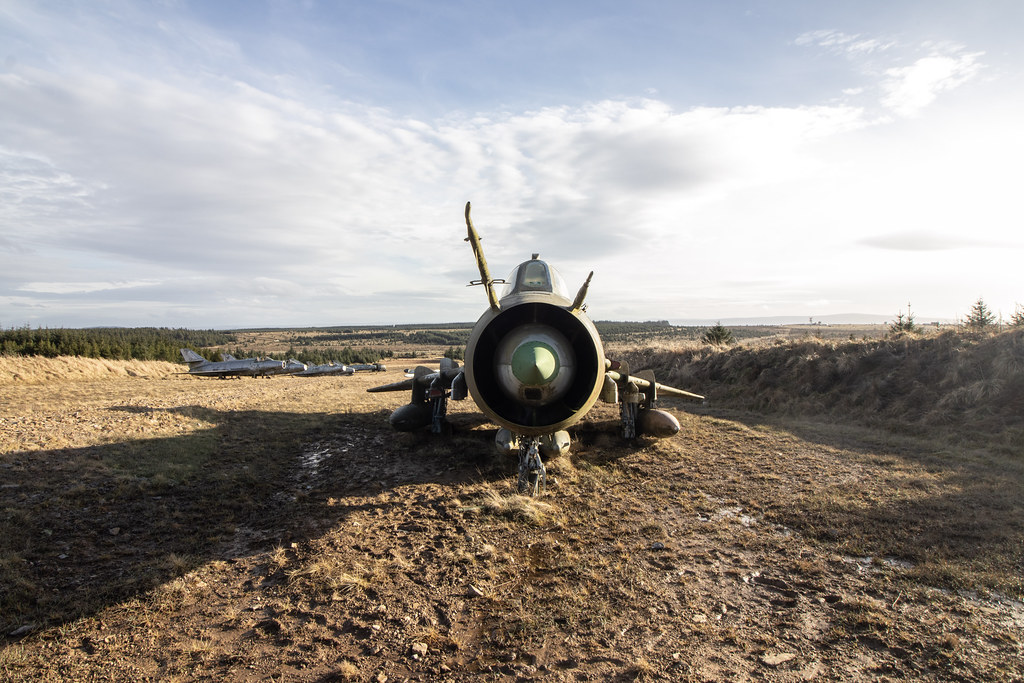 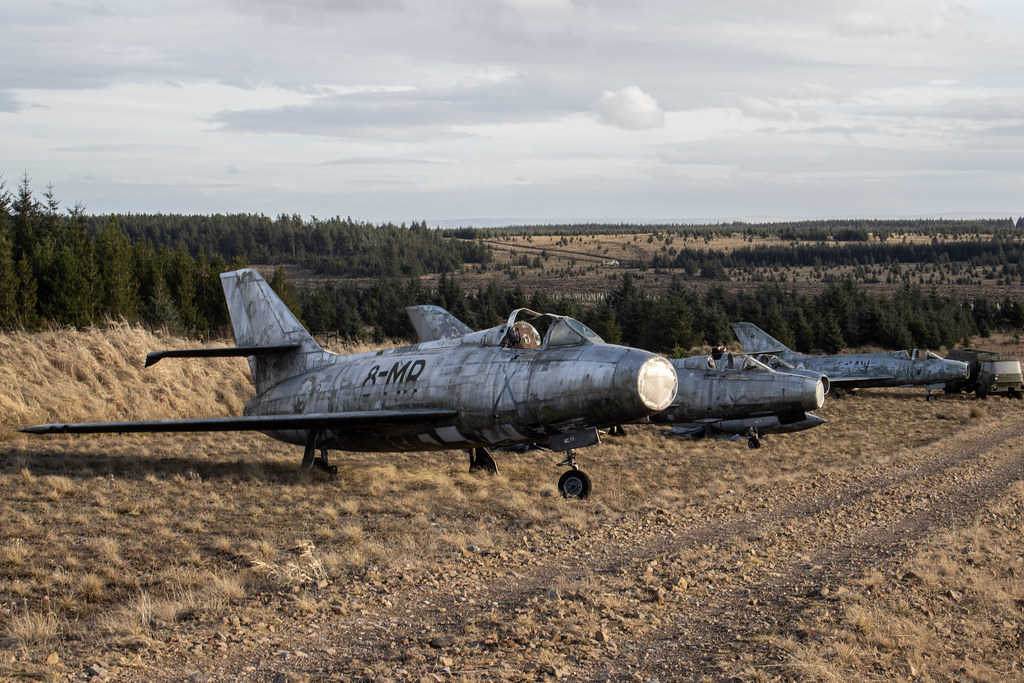 The largest collection of planes was this row of six Dassault Mystere bombers, introduced in the 1950s and primarily used by the French. There were two more decaying separately. 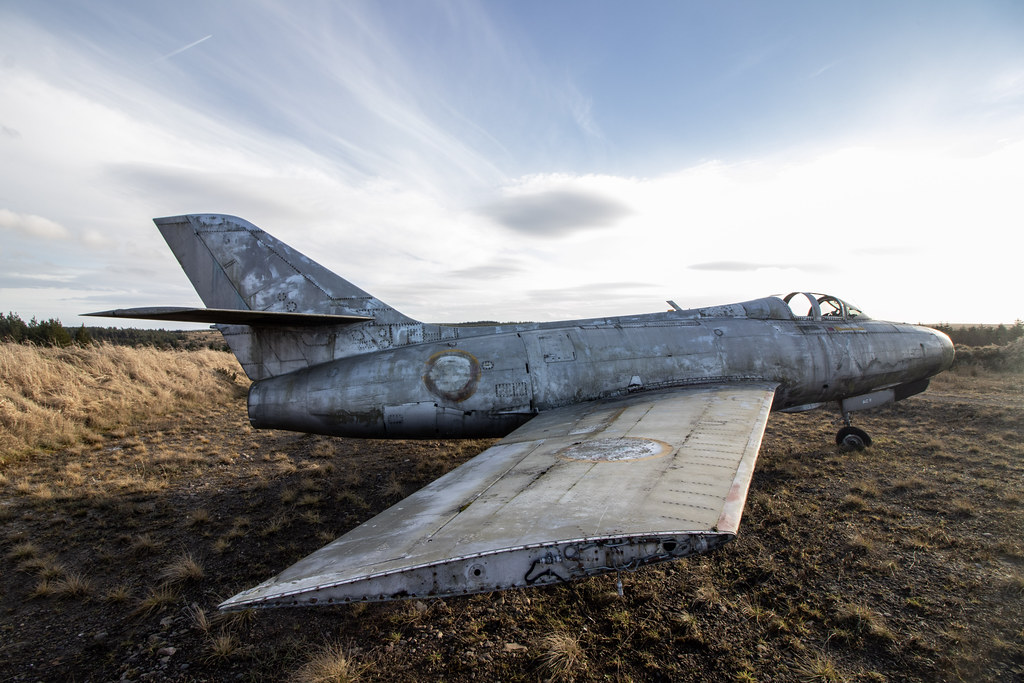 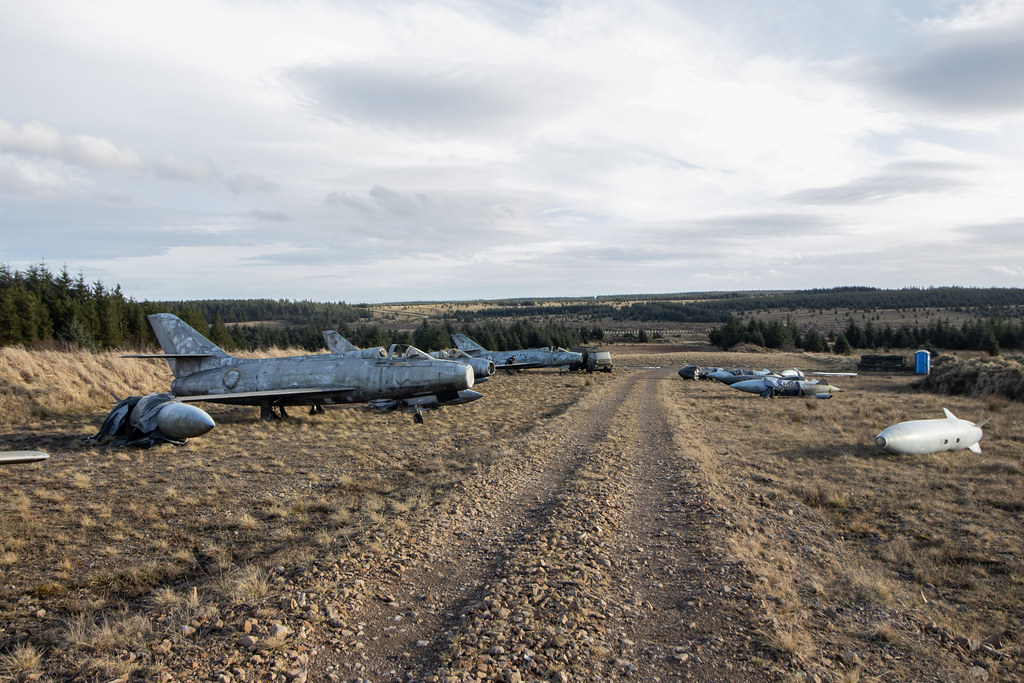 Next to each plane and across from them, a bunch of what are either fuel storage containers or mock missiles. 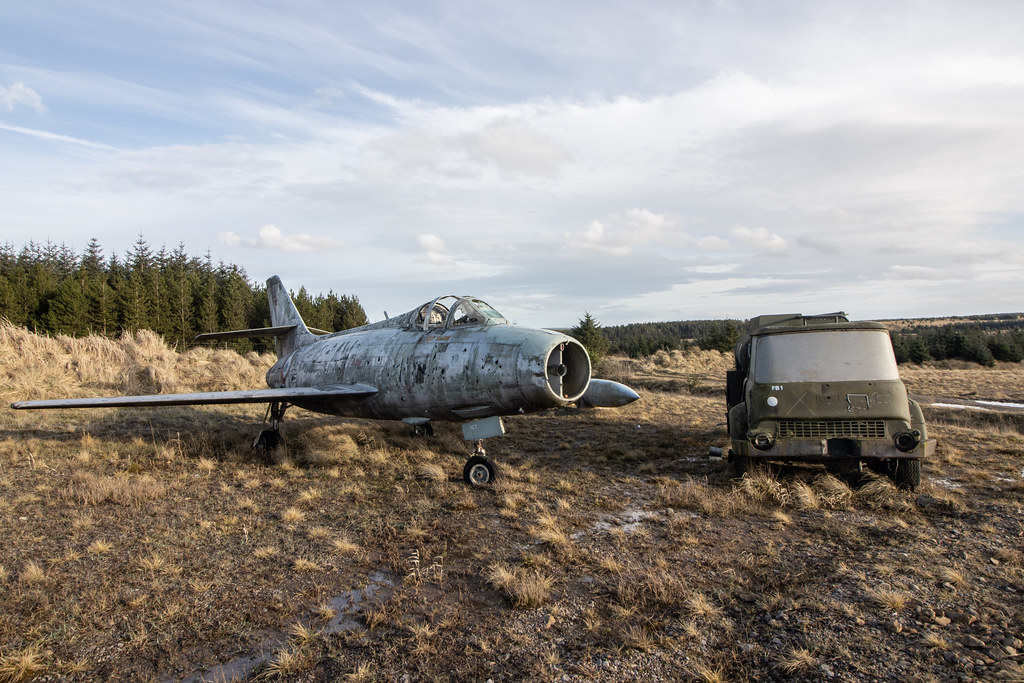 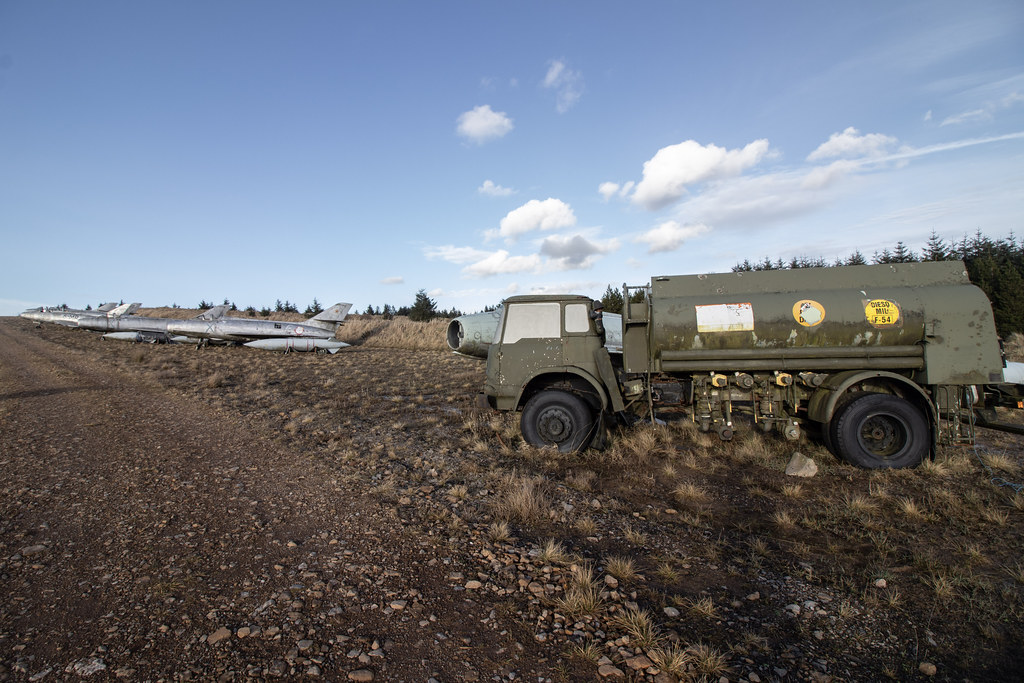 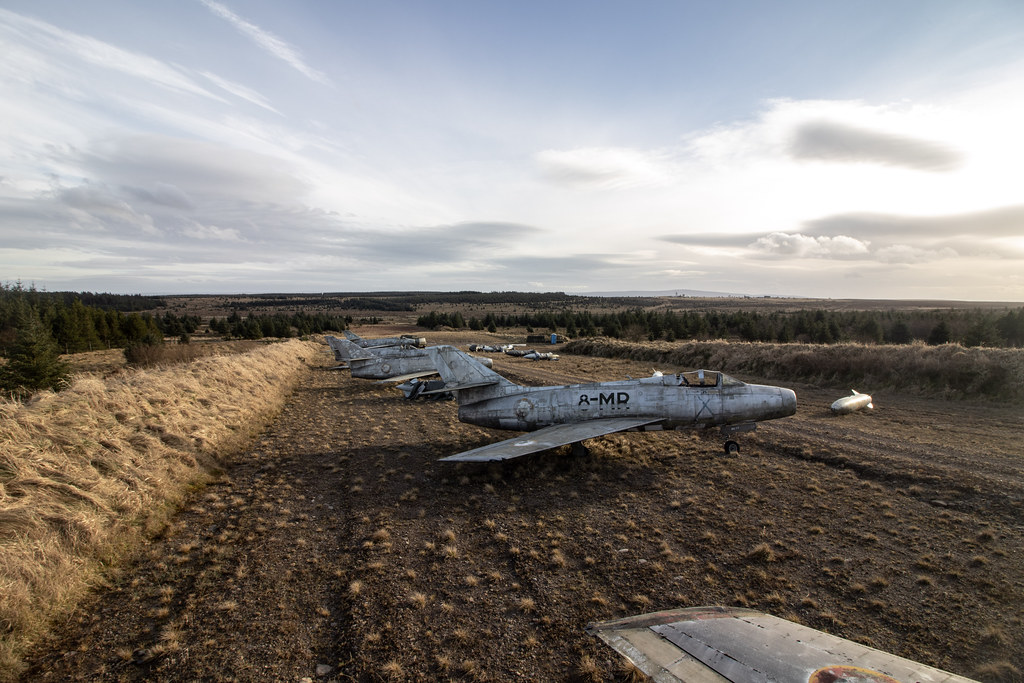 Looking down at the second half of fighter jets from atop one. 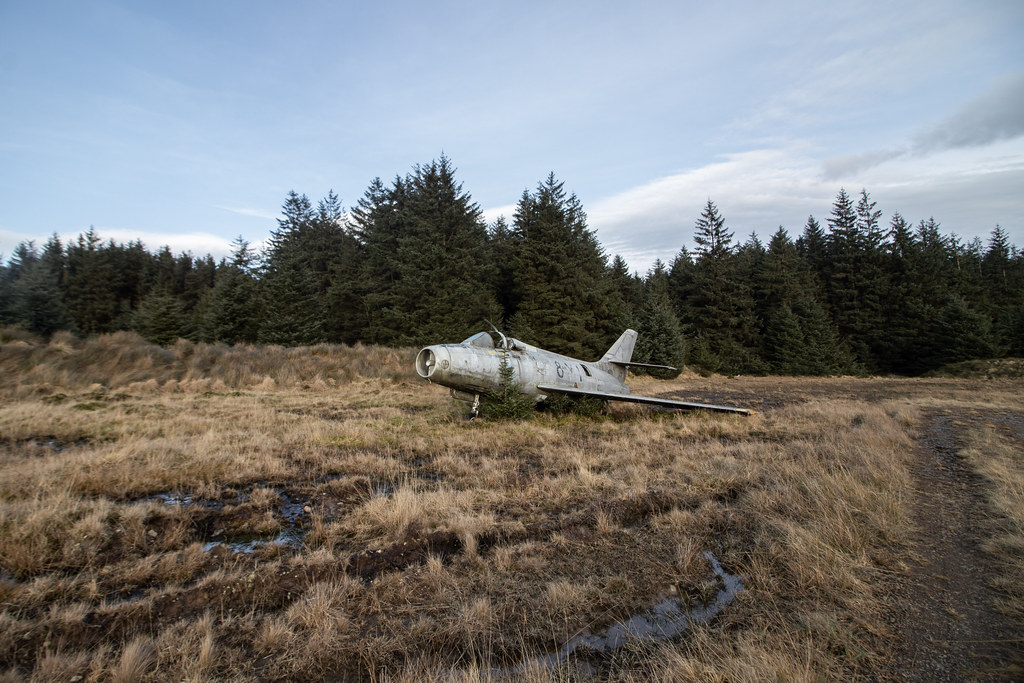 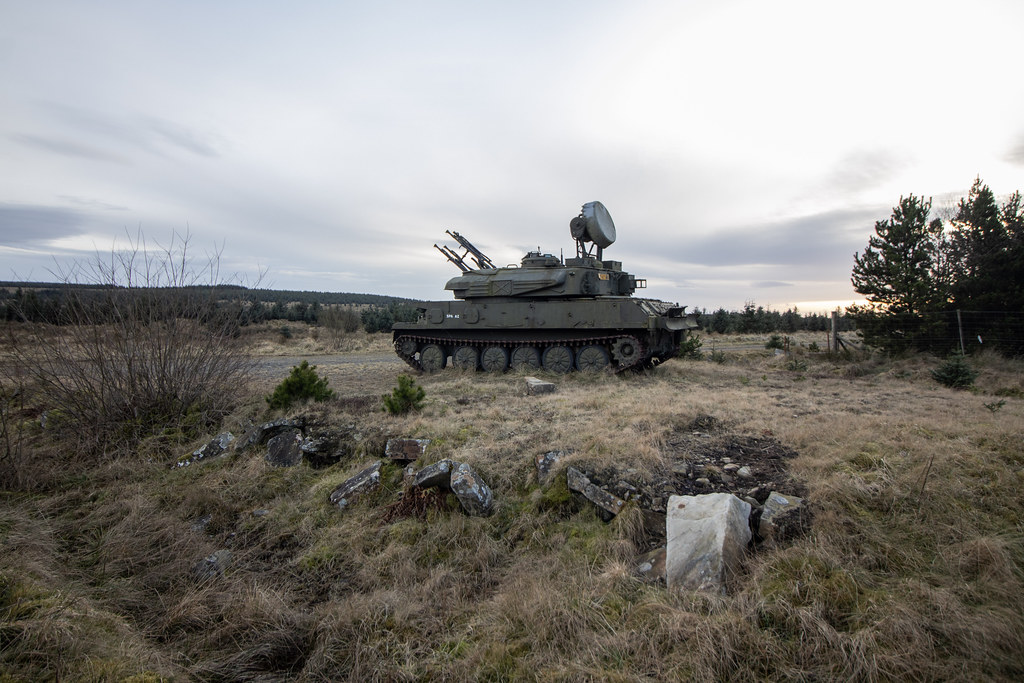 Progressing southwards of the vacant strip of runway, we came to a tank. Later on, we would find out that this was only a model and never saw action, but that didn't take away from the intimidating posture of the vehicle and realism. 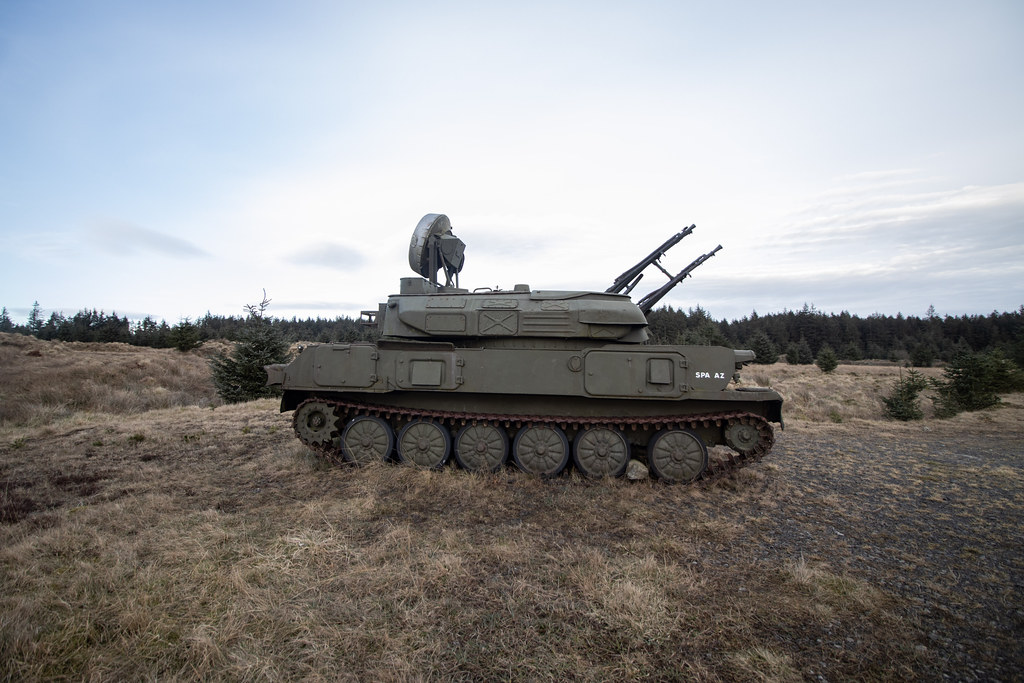 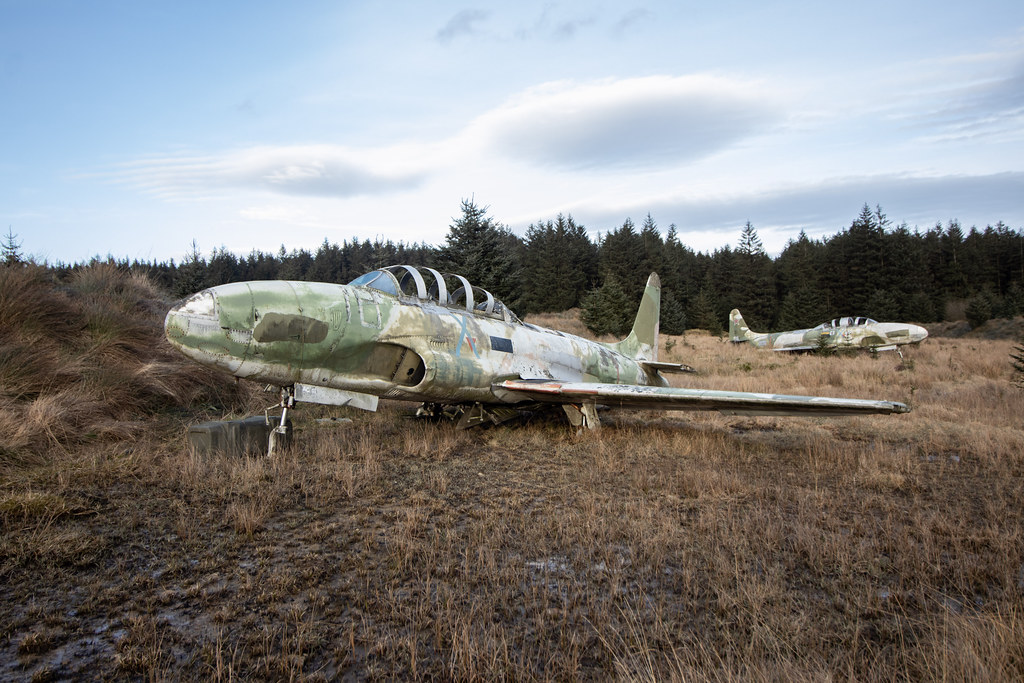 A trio of American Lockhead TT-3's, that were nicknamed 'Shooting Stars.' 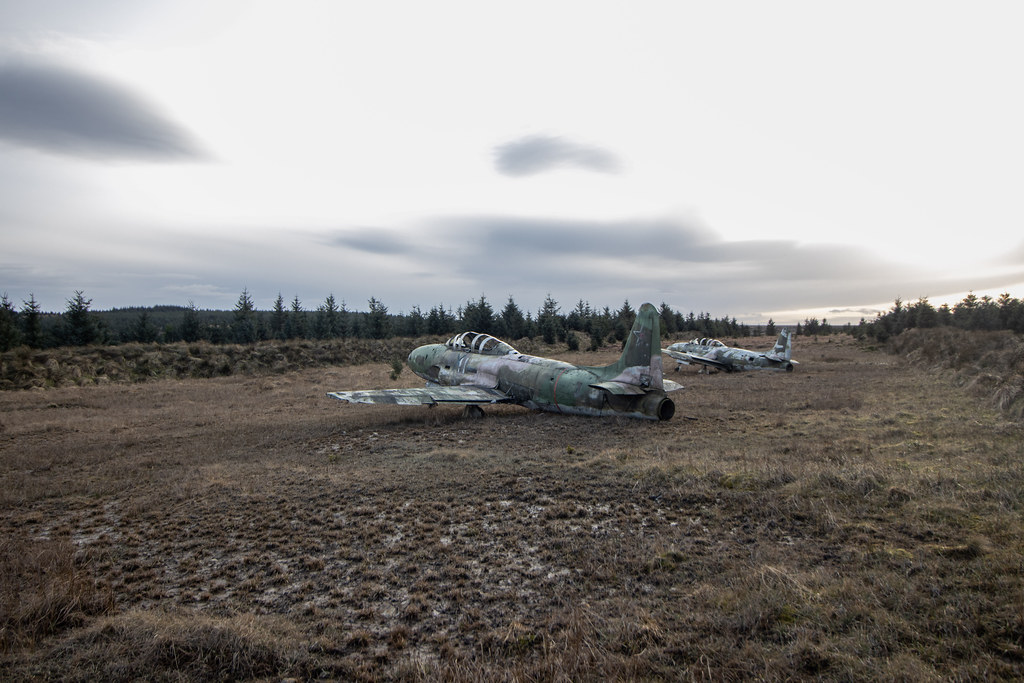 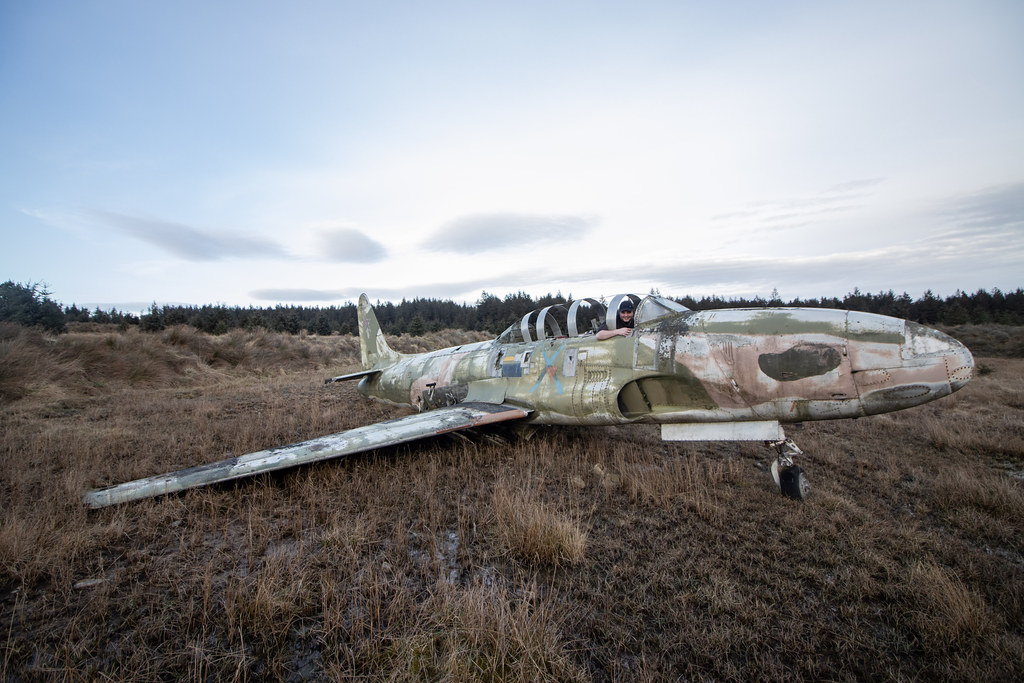 At this point, we were under the impression that we were done onsite, with good time, keeping in mind the lengthy walk back towards the car, preferably not to be undertaken in nightfall. However, one of us spotted a large, green object on the horizon and it was immediately decided that would have to trek over there to it, with it appearing like a grounded helicopter. Racing against time, with the sun rapidly setting on our right, we hiked a further mile or so before being blocked off by a surprising river. Eventually, we had reached the aircraft just as the daylight ran out. 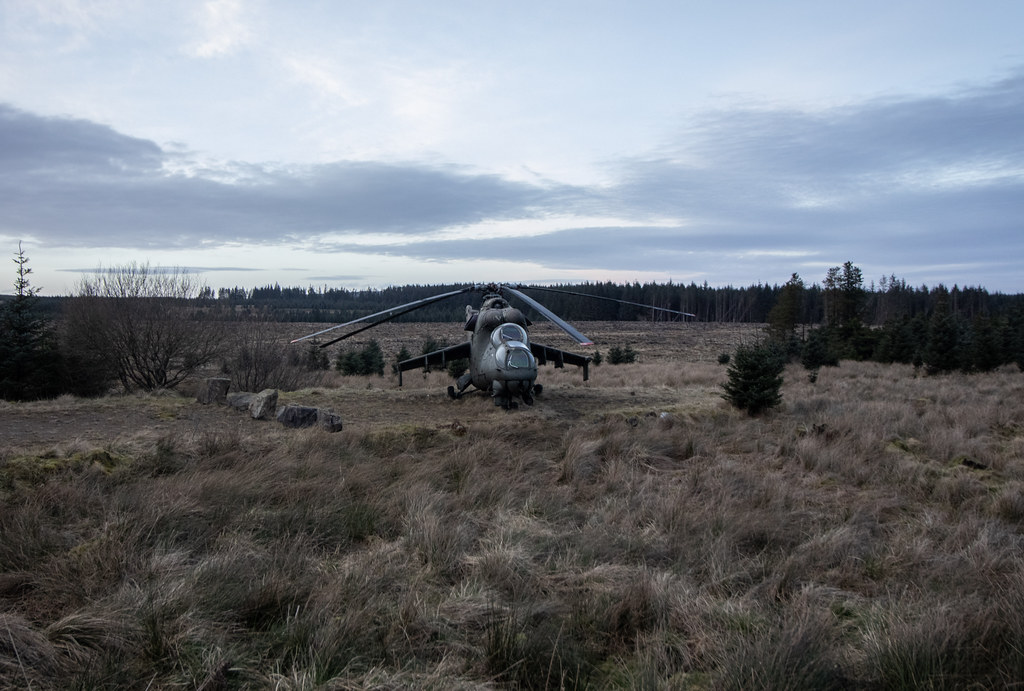 The helicopter in question is a Mil Mi-24 Attack Chopper, with capacity for eight passengers, a streamlined body and retractable undercarriage landing gear for reduced drag. 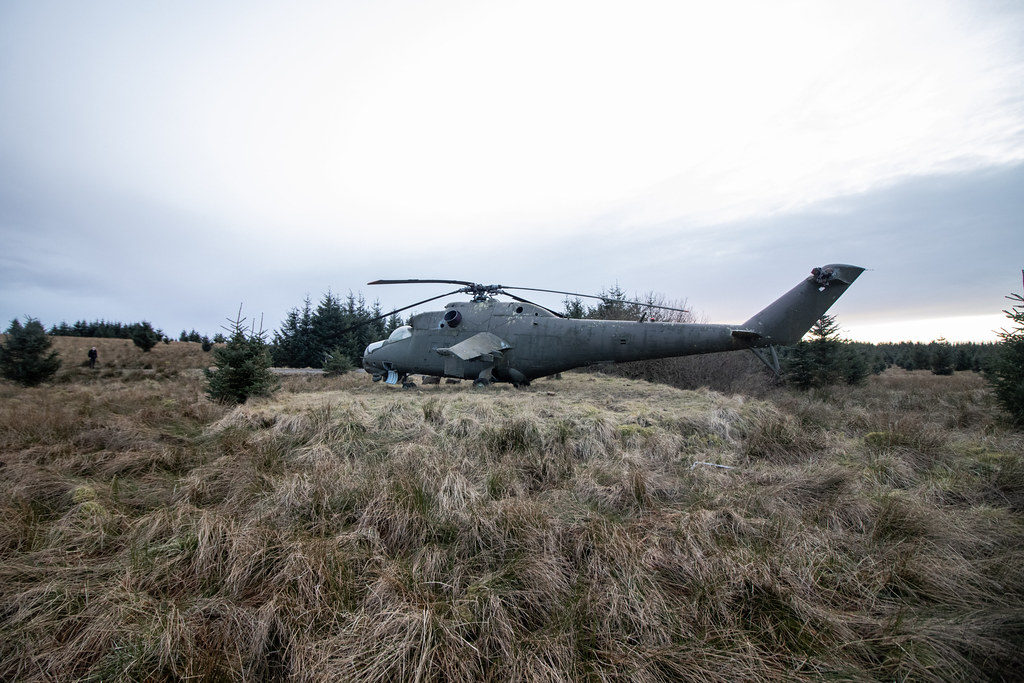 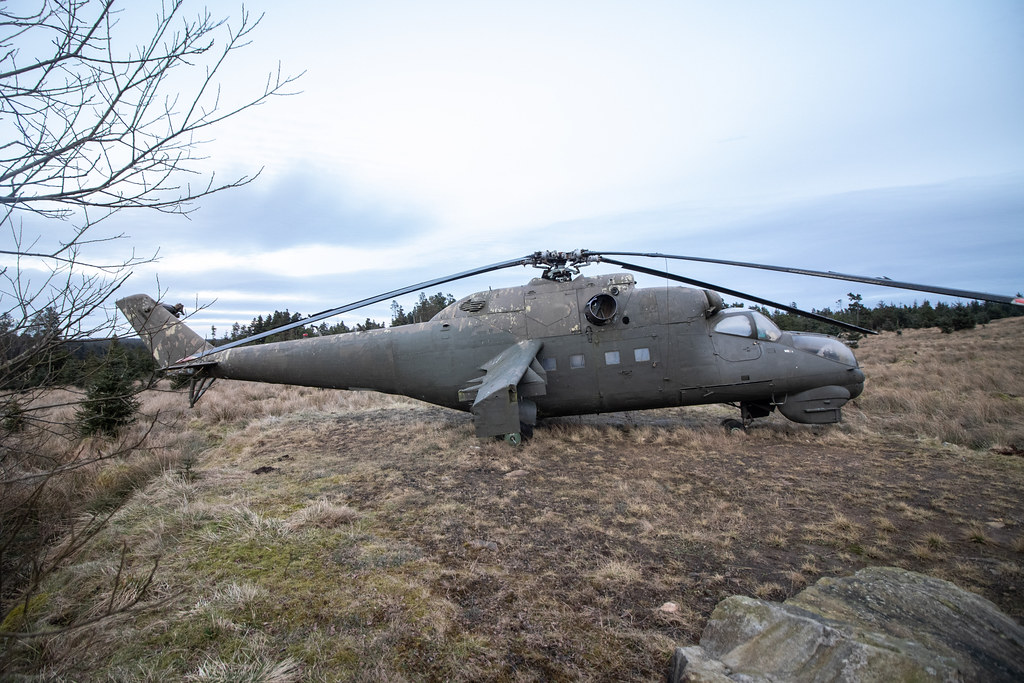 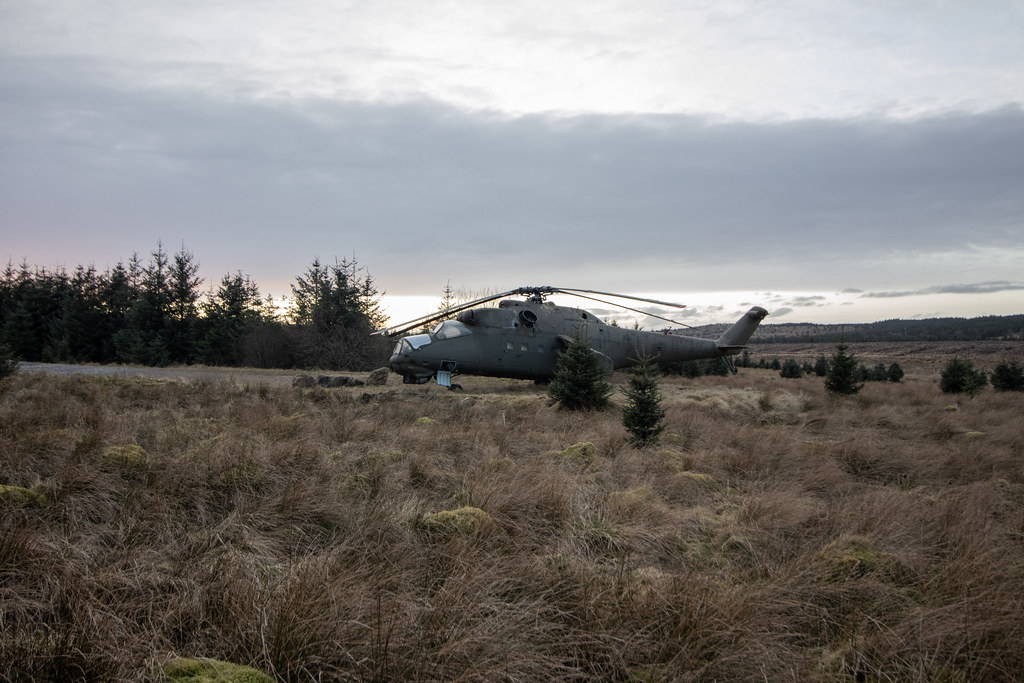 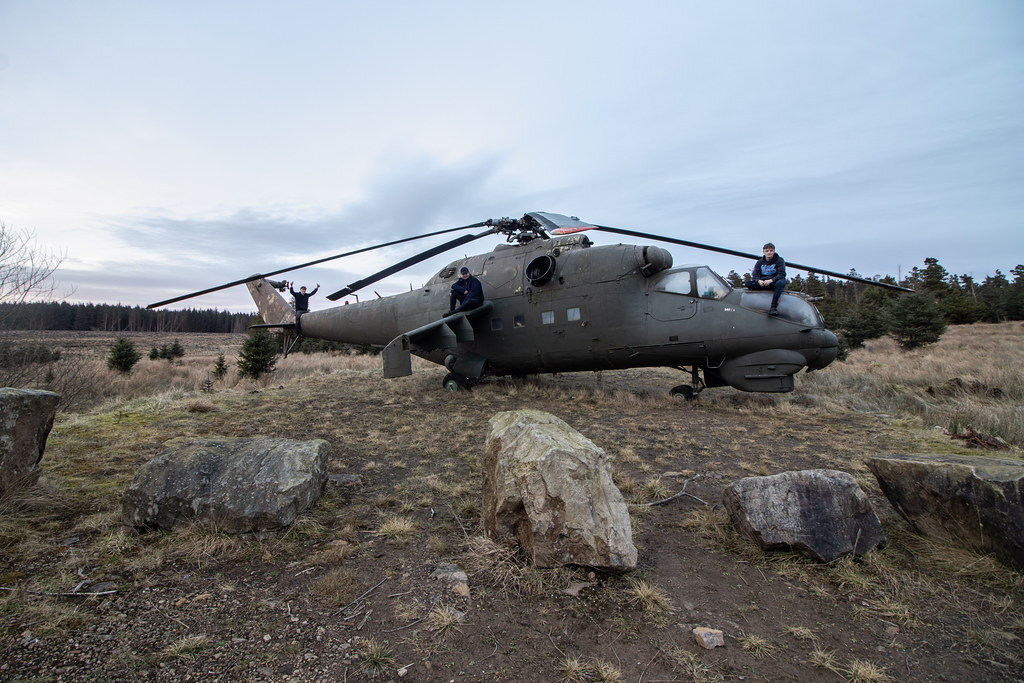 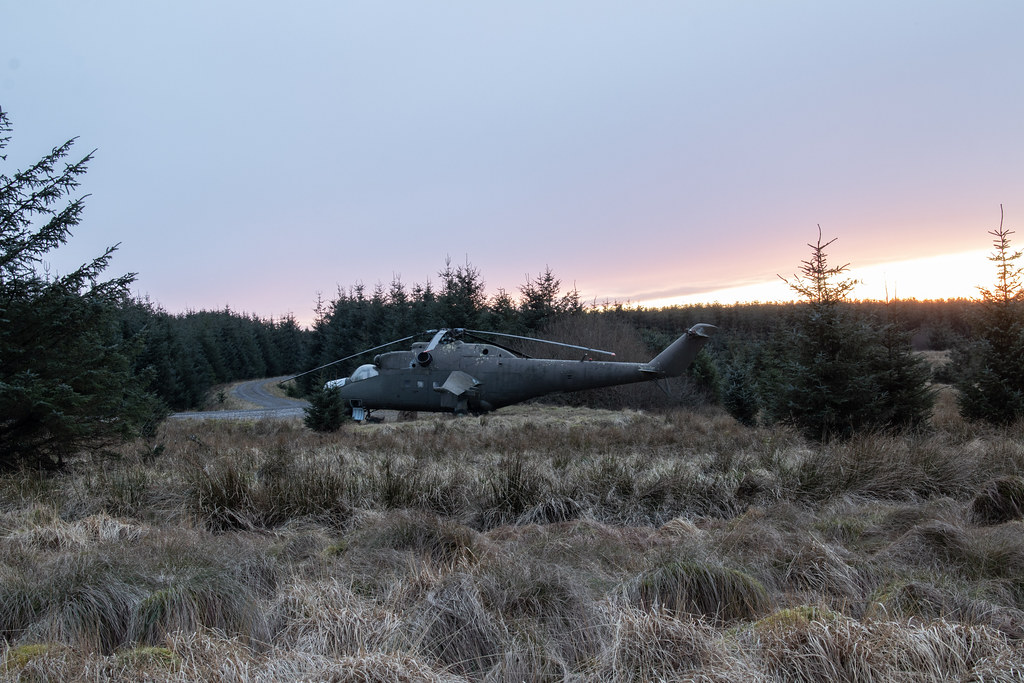 To finish with - captured just as the dying sun created imposing colours in the sky.

Here is the link to our documentary styled video filmed at the airbase. With this being my favourite video we have ever made, I would love for you to watch it regardless of whether your ideas surrounding videos are negative enforcing. We cover the site's past, present and future through cinematics and narration:

A couple of years old now, but well worth a read

Talking a Blue Streak: The ambitious, quiet waste of the Spadeadam Rocket Establishment

Memories of missiles on the moors of Cumbria

Is it appropriate whilst mentioning RAF Spadeadam , it was also the filing spot , naturally I suppose for the Top Gear Reliant Robin space shuttle. (Series 9, episode4)
As a child my family had a holiday home on MOD/forestry commision land. We often were witness to things we shouldn't have seen because back during cold war times it was a Top secret base . My dad was ex Forces I remember him and some mates digging Wullies jeeps out of a peat bog . Them hills and forests are a rabbit warren
L

JustMeffie said:
Is it appropriate whilst mentioning RAF Spadeadam , it was also the filing spot , naturally I suppose for the Top Gear Reliant Robin space shuttle. (Series 9, episode4)
As a child my family had a holiday home on MOD/forestry commision land. We often were witness to things we shouldn't have seen because back during cold war times it was a Top secret base . My dad was ex Forces I remember him and some mates digging Wullies jeeps out of a peat bog . Them hills and forests are a rabbit warren
Click to expand...

Dam that was good, Nice one

Fascinating and a well pictured tour of a site that takes me back about 55 years to when I was an Engineering Undergraduate at Newcastle University. I think it was the Engineering Society that organised many fascinating visits for students, one of which was to Spadeadam. Apart from a very detailed tour round the site, visiting the various areas that were involved in the massive Blue Steel project, we were also lucky (and with hindsight privileged) to witness a test firing from the control bunker. Distanced 700 feet away, the ground was shaking under our feet, and the sight of the huge clouds of cooling water was absolutely awesome. It wasn't just the engine being tested though, this was a fully assembled Blue Streak rocket, only held, we were told, but a single clamped ball attached to the rocket. Never forgotten!
We were amused during the journey to the site, of the close proximity (about 5-10 miles) of a small hamlet called Moscow!

Bloody brilliant report and pics I enjoyed it very much!

All I remember about my visit here is the endless slog over ground shown in your first pic, man that was hard work!