Just a few photos taken at a local RAF base on one of our trips there. This is one of my favourite places to go to. The buildings are empty but the scale and amount of buildings is impressive, all in reasonable condition. With a gymnasium, a watch tower, and many different buildings it has a different feel depending on where you are.

RAF Upwood originated in September 1917 when the War Department requisitioned Hill Farm, then owned by Lord de Ramsey, for use as an Emergency Landing Ground. The airfield was later used as a Home Defence 1st Class Night Landing Ground for BE2 aircraft of 7 Squadron, Royal Flying Corps. By the summer of 1918 permanent huts and five large hangars had been constructed and the site renamed Upwood Airfield, under 6th Brigade, Midland Area of the 47th Home Defence Wing of the newly formed Royal Air Force. When World War I ended the airfield reverted to agricultural use with the buildings being salvaged by local farmers.

The Royal Air Force returned to Upwood Airfield in January 1937 when Squadrons 52 and 63, equipped with Hawker Hind and Audax bi-planes, were located there. Squadrons 90 and 53, equipped with Bristol Blenheims, replaced 52 and 63 Squadrons by February 1940 - their main mission to train RAF personnel for bombing missions. These two units later merged to form 17 Operational training Unit (OTU).

Joseph Jakobs was parachuted in to spy on RAF Upwood in Jan 1941. Breaking his ankle on landing he was easily captured and eventually imprisoned in the Tower of London becoming the last known person to be executed in the Tower. (fun fact, eh?)

By April 1943 the airfield came under No. 8 PFF (Pathfinders) Group but as the grass runways were frequently waterlogged, upgrading work was required.

Three new concrete runways were constructed by October 1943, allowing the first of the Pathfinder Squadrons, No. 139 (Jamaica), to use the airfield the following January. From this time forward, Upwood Airfield was home to 139 Squadron equipped with Mosquitoes as well as 156 Squadron with Lancaster bombers.

At the end of the Second World War, 156 Squadron was relocated at Wyton whilst 139 Squadron remained at Upwood until February 1946. After this it was used as a training centre for some time and was later leased to the USAF. It is now closed, although USAF has retained a medical facility on site. The housing has been sold and some of the hangars have been converted for use by Turbine Motor Works Ltd. There are ambitious plans to redevelop the rest of the base. 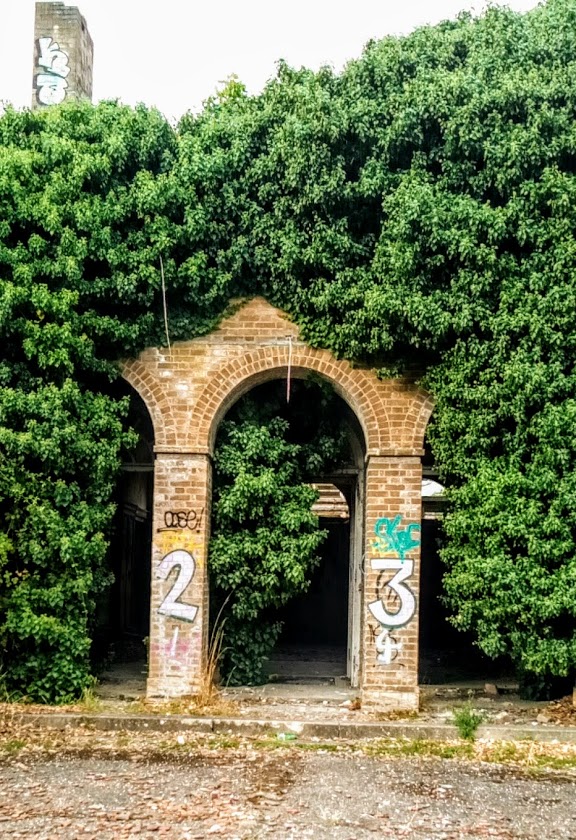 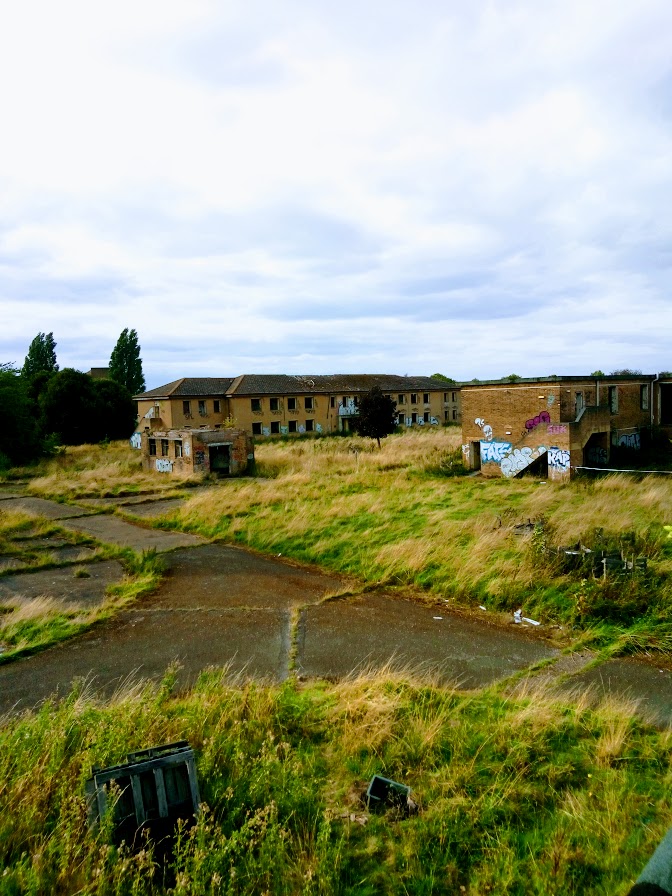 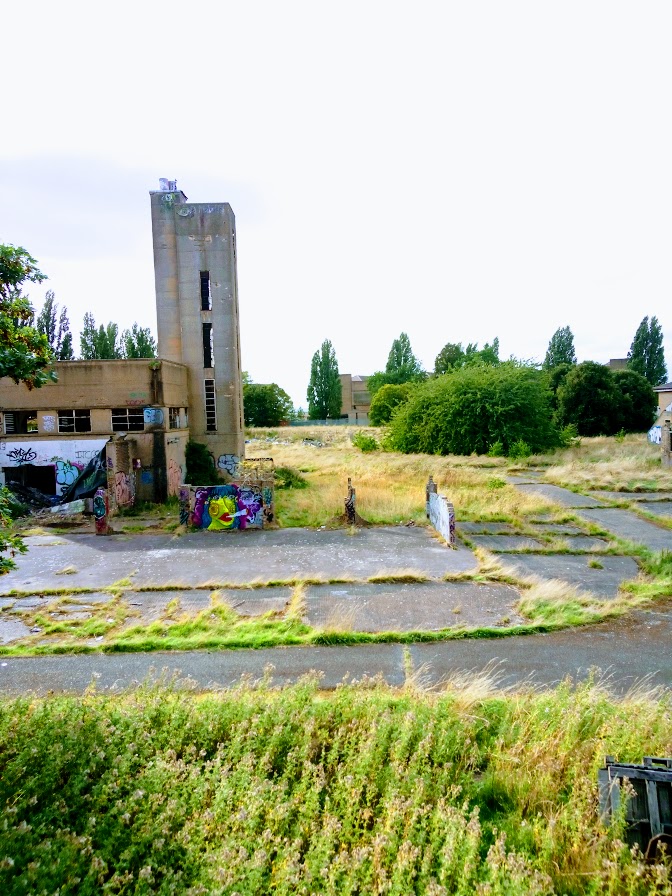 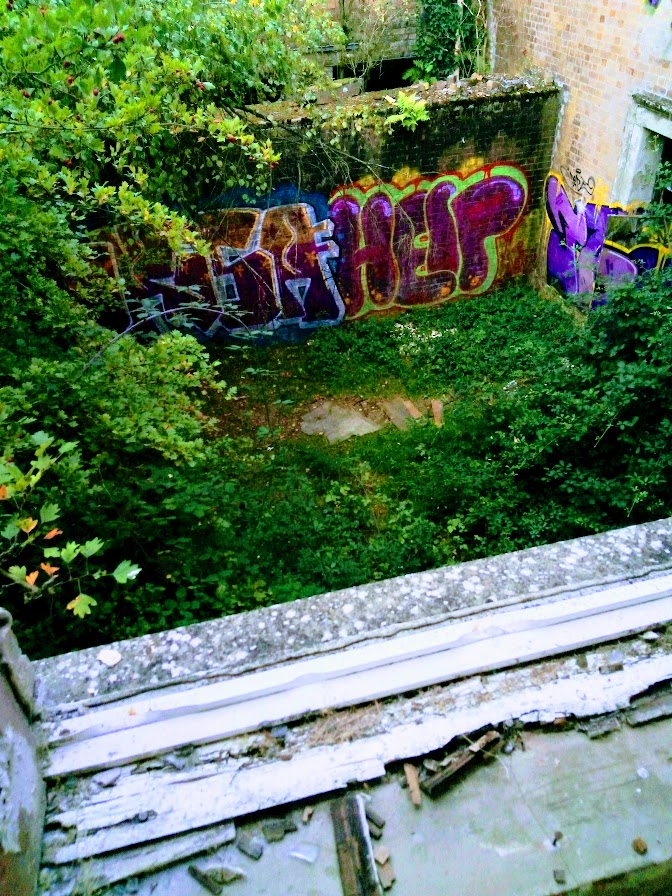 My photos truly don't do this place justice, when I get a proper camera i will go back with taking some photos in mind, i thought these were worth sharing for now. A lot of the graffiti was senseless but i have a few shots here of some of the good ones. I tried to bring the colours out on editing as it was night when we went, hope its not too much. 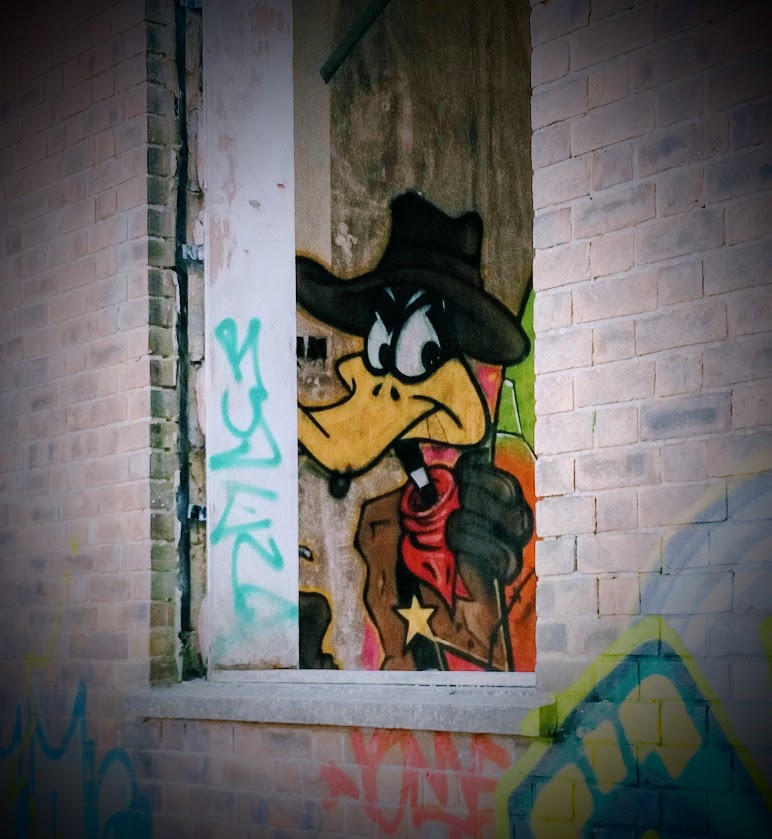 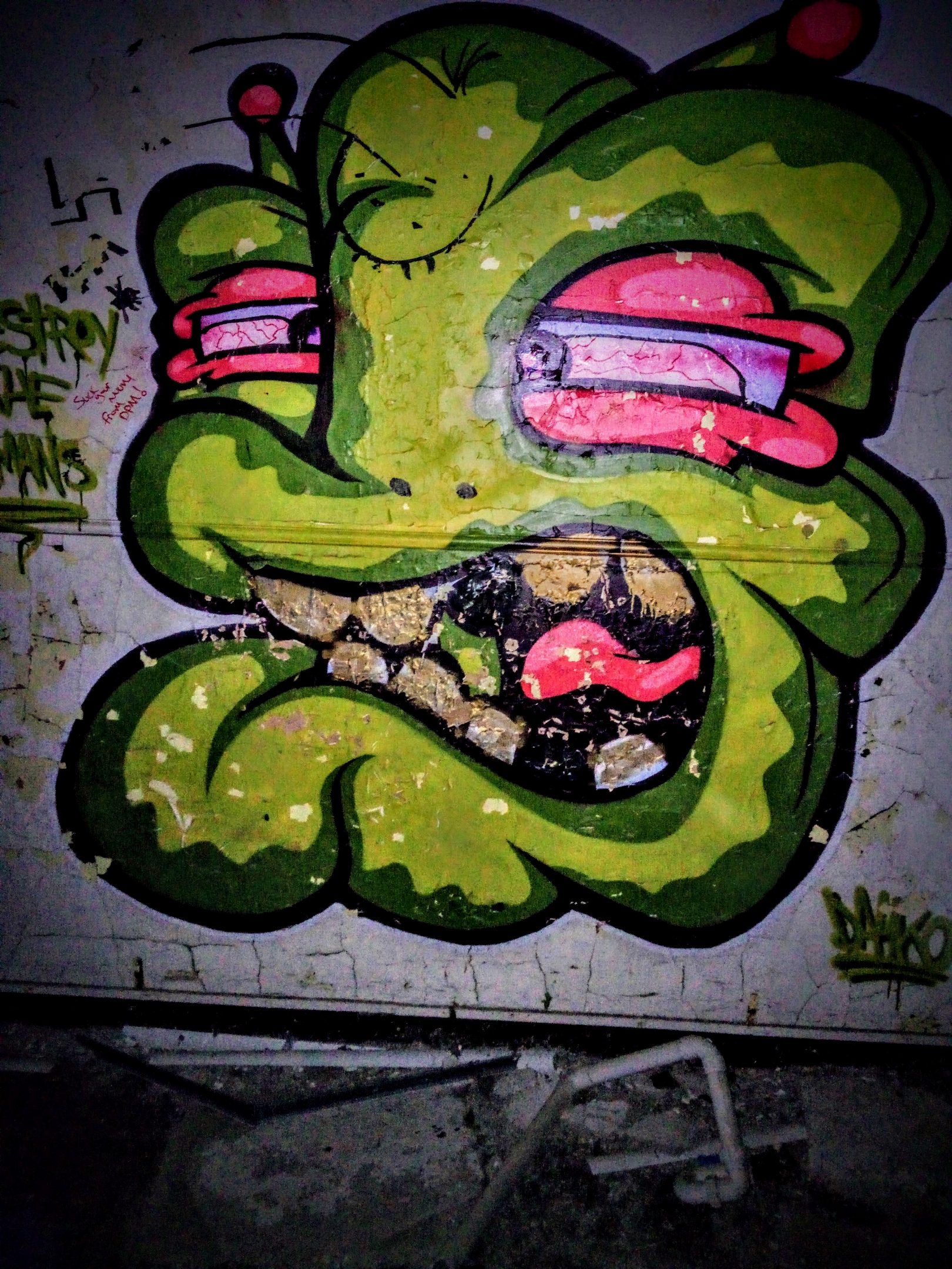 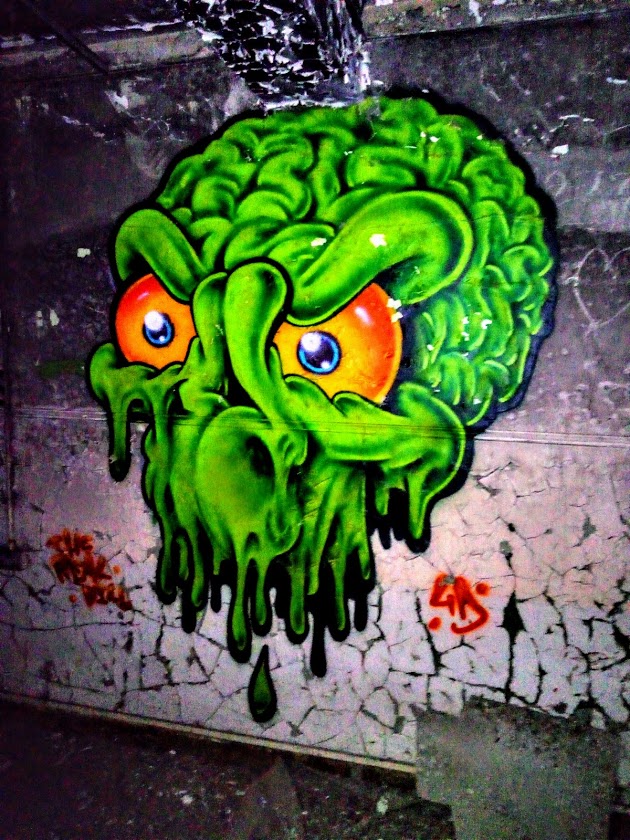 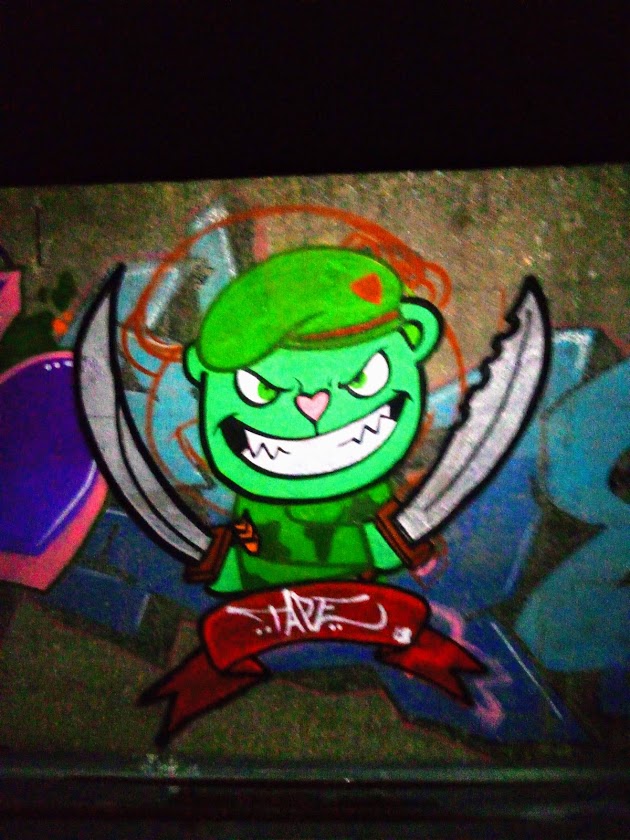 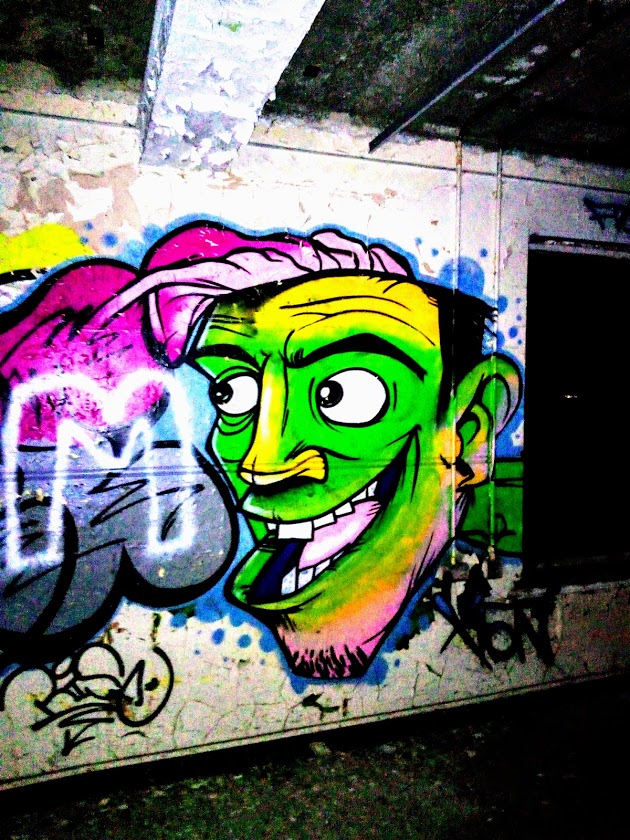 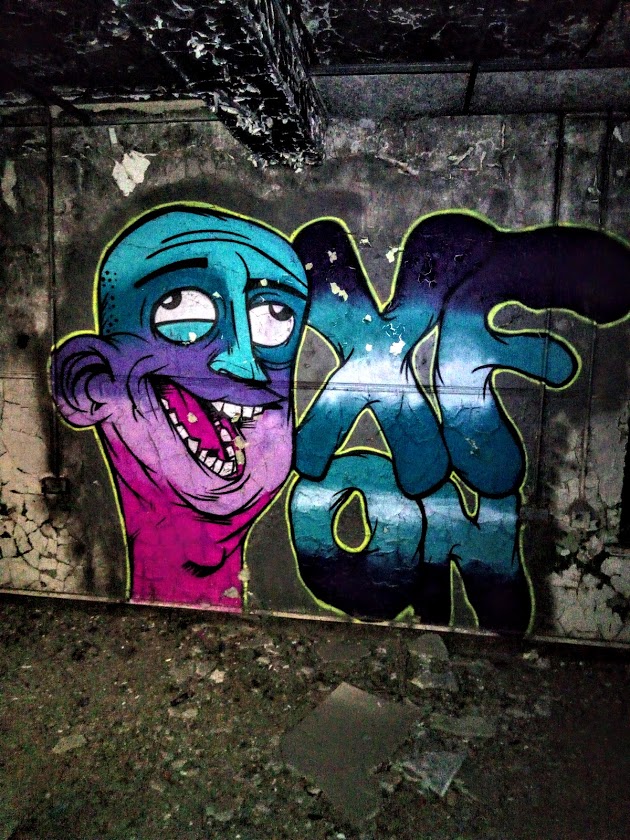 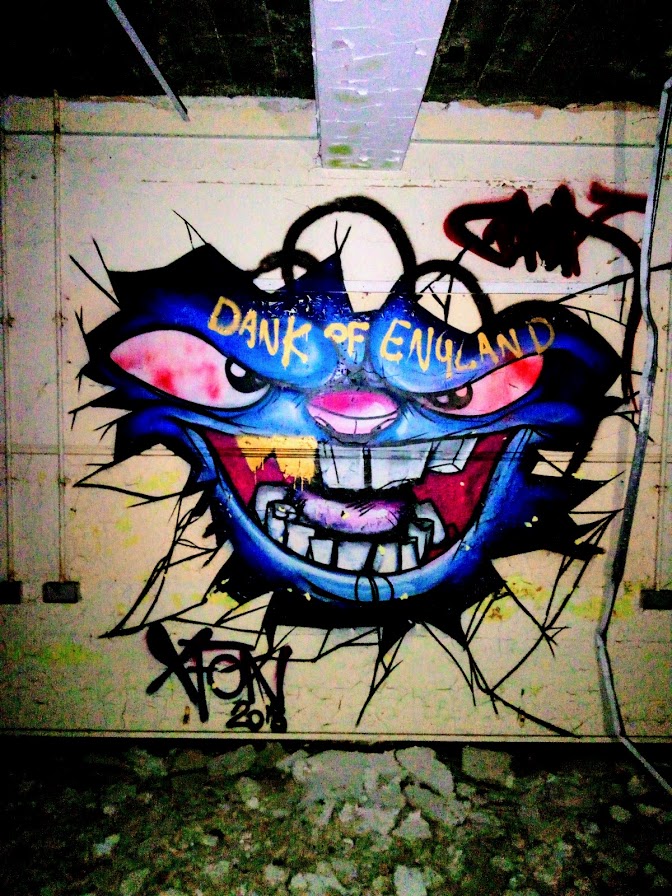 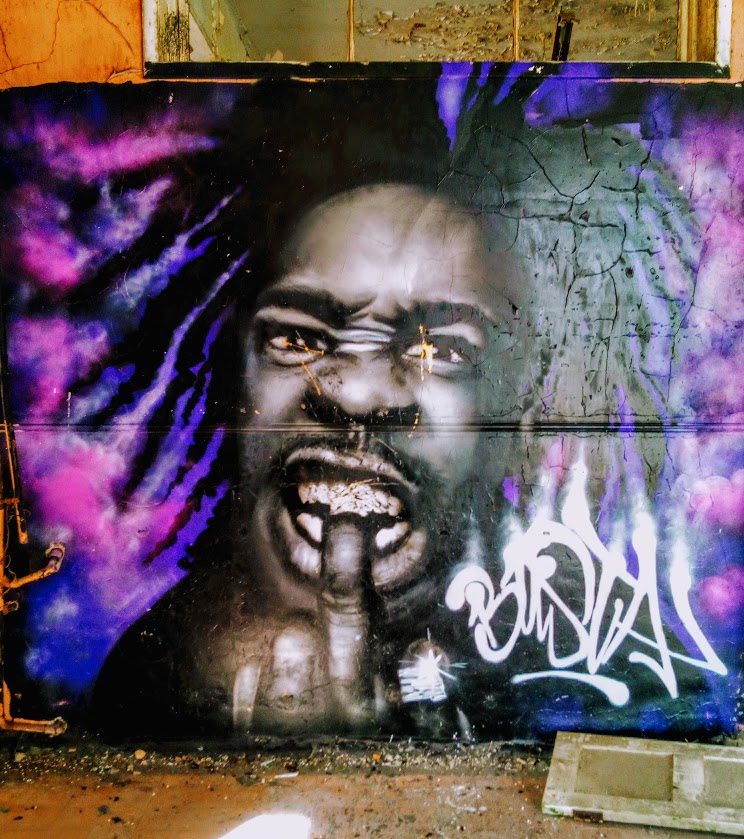 Like a bit of graff and there's plenty here, for sure!

I'm not too keen on grafitti but these are very artistic. If this type of photography is going to be your subject/theme you do need a decent camera.
C

Hi Hugh, yeah I'm looking at getting one now, do you have a recommended camera for a beginner?
P

That little green army guy with two knives is from happy tree friends, haven't seen him in almost 15 years back in school days when flash animations were the best thing since sliced bread.

CheeseOnToast said:
Hi Hugh, yeah I'm looking at getting one now, do you have a recommended camera for a beginner?
Click to expand...

Well, phew, how long is a piece of string? There are many on the market and on Amazon website. I could make a suggestion and go for a Canon but someone else might go one better than me and recommend another make. Choose a camera and look at the reviews then make your choice.

Great to see Upwood again..I didnt even know it was still there..I went ten years ago but the American hospital was in use then..I heard that too closed some time ago.
C

Hugh Jorgan said:
Well, phew, how long is a piece of string? There are many on the market and on Amazon website. I could make a suggestion and go for a Canon but someone else might go one better than me and recommend another make. Choose a camera and look at the reviews then make your choice.
Click to expand...

Thanks for the advice, I went and bought one the other day, a Canon, funnily enough.
Took it with me today on an explore and am pretty happy with it.