I remember a time a couple of years ago when I would never have dreamed about doing as many houses as I've done in the last year and a half. There was a time I'd avoid them like the plague but you could say that those days are well and truly past me now as I do try and see the more interesting ones.

To say this place is remote is a bit of an understatement - hidden off an old overgrown road impassable in a car in the far outskirts of a tiny village in the midst of Devon and invisible from Google's aerial view, you'd never even know this house existed. As far as we could tell it's been abandoned since the mid-00s, although even back then it must have been in pretty rough shape from the state of the roof and the floors. It seemed to be your typical hoarder kind of story with all manner of things stuffed in the house - toys, three lawn mowers, dozens of blue fruit crates, hundreds of magazines etc, but the thing I most wanted to see was outside. Sitting round the side of the house is a Series III Land Rover complete with safari roof rack, covered in years of pine needles and undergrowth. Sat outside the house like it was made for an awesome sight.

I enjoyed the house more than I thought I would too. Whoever lived there must have been quite an artist as there were numerous paintings and sketch books as well as a table full of paint and art type things in the living room. A couple of rooms are pretty much inaccessible thanks to the seriously bad floors in some areas, and a hole in the roof has allowed the central upstairs landing to become very rotten in one area which cut off the bathroom from us. 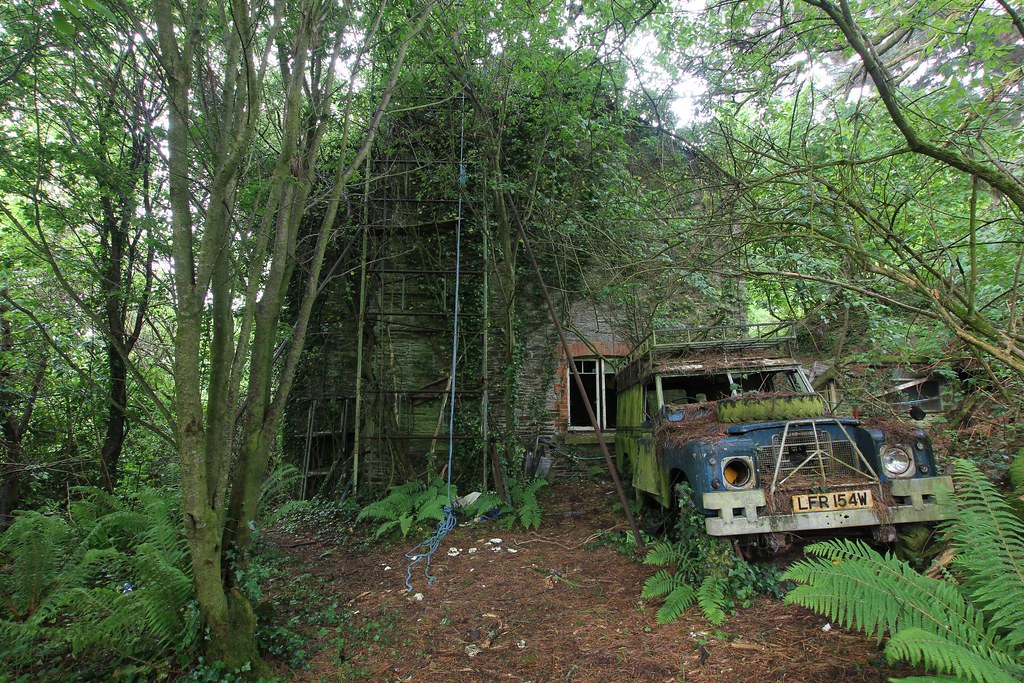 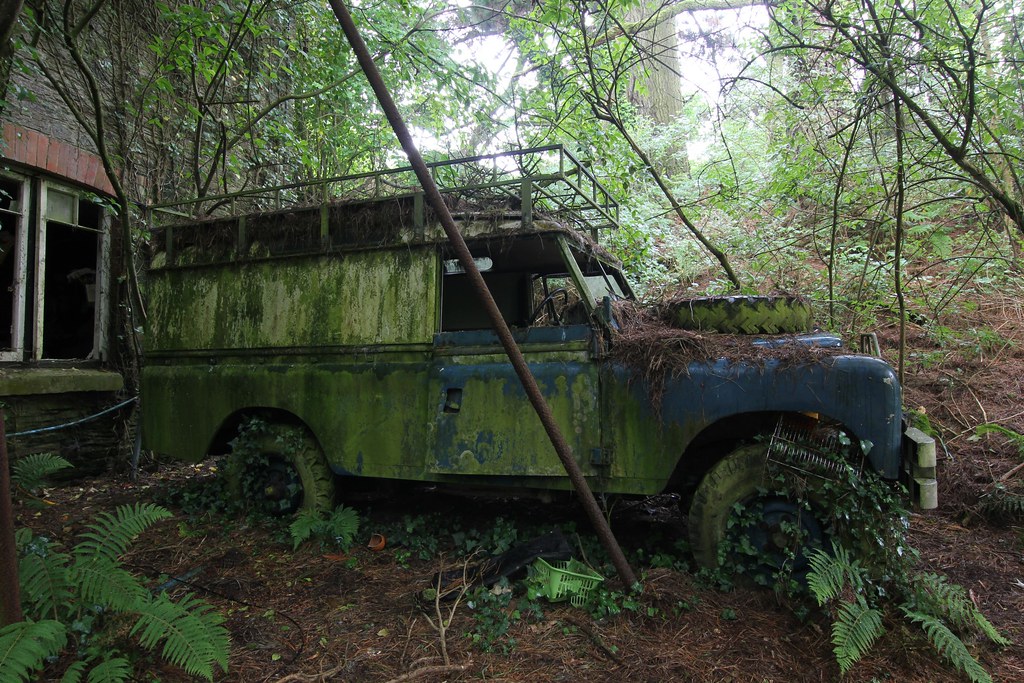 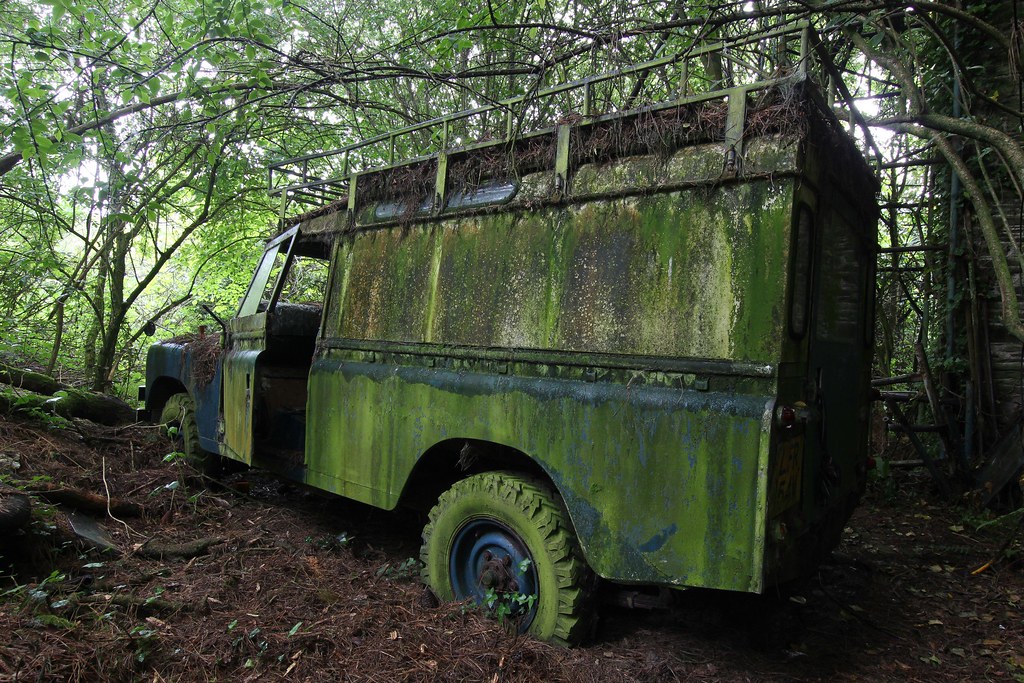 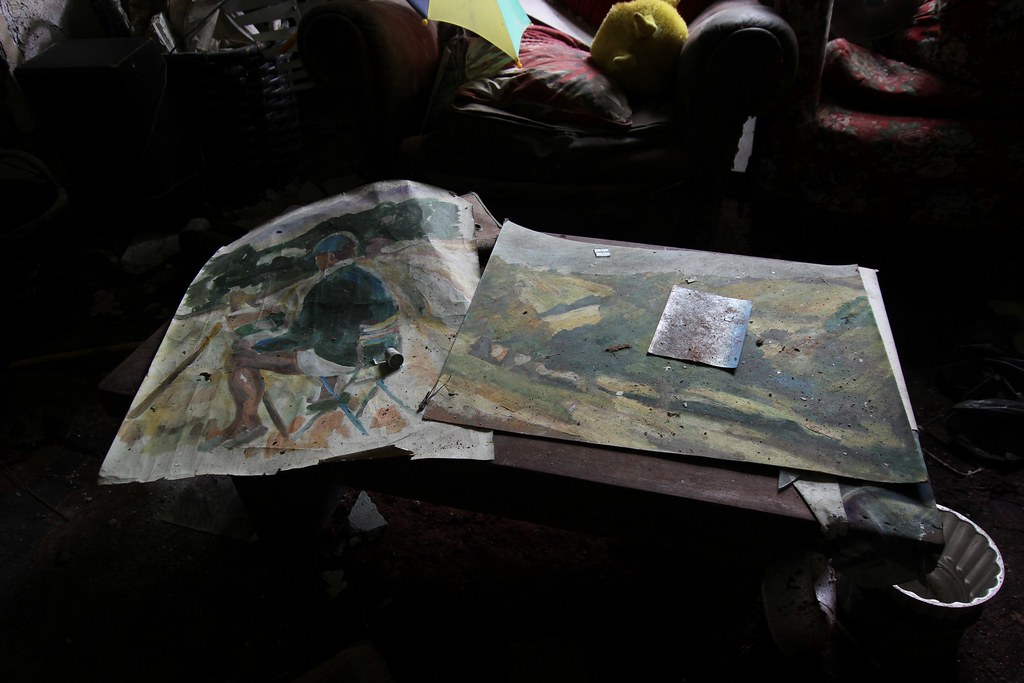 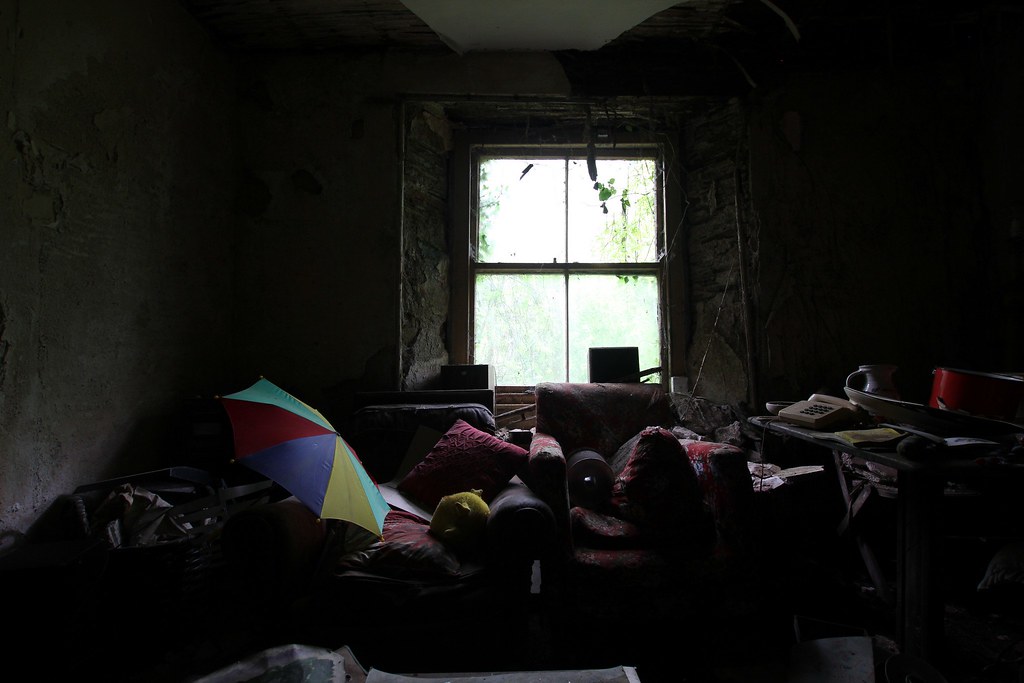 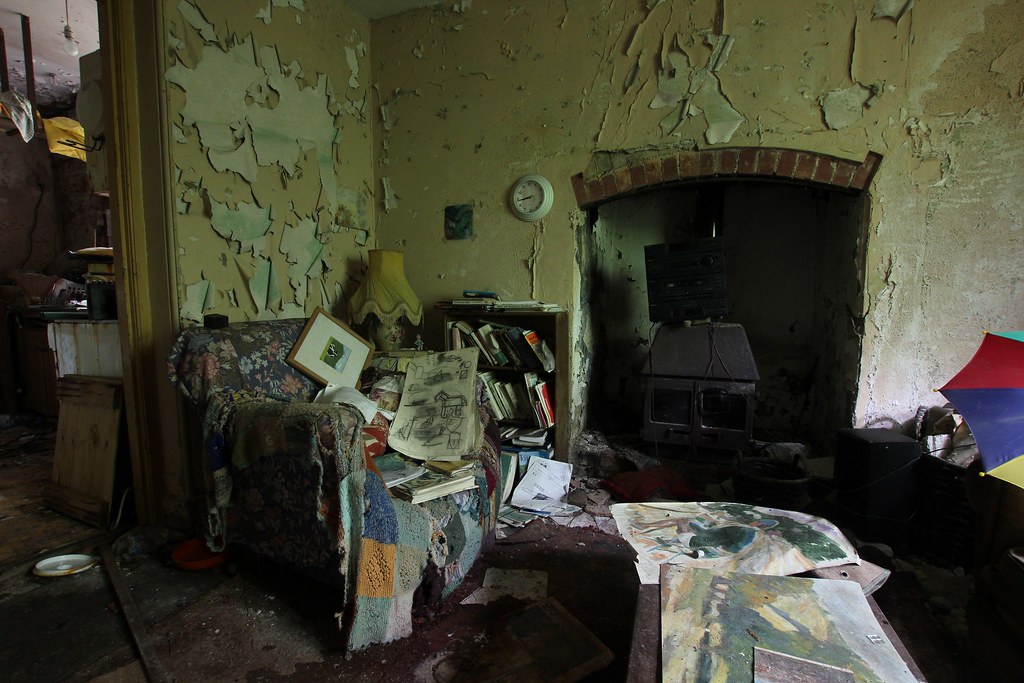 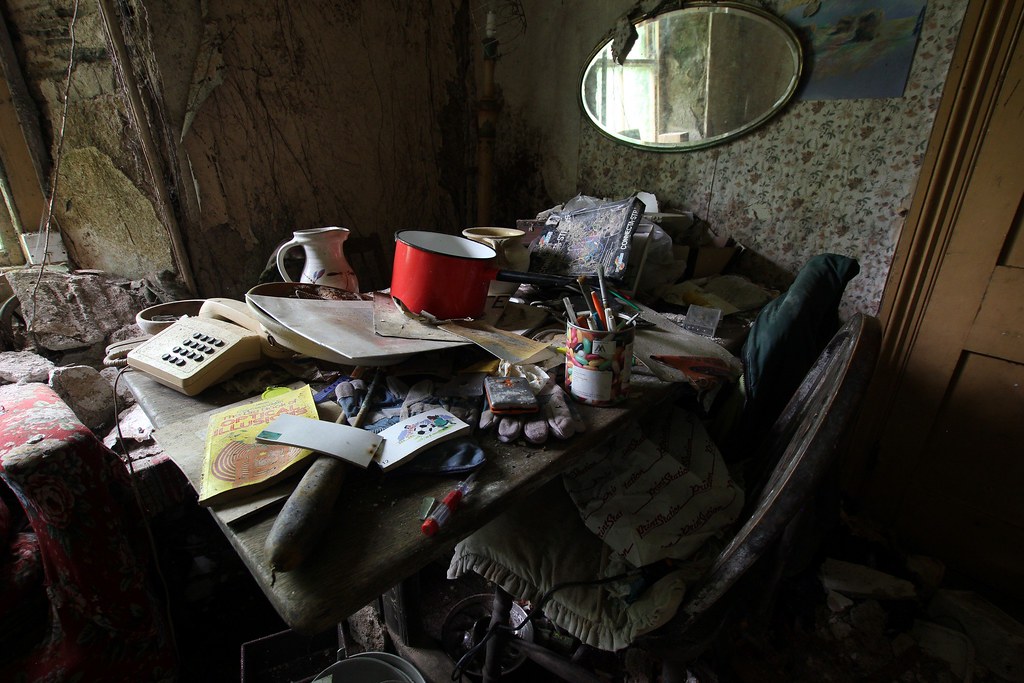 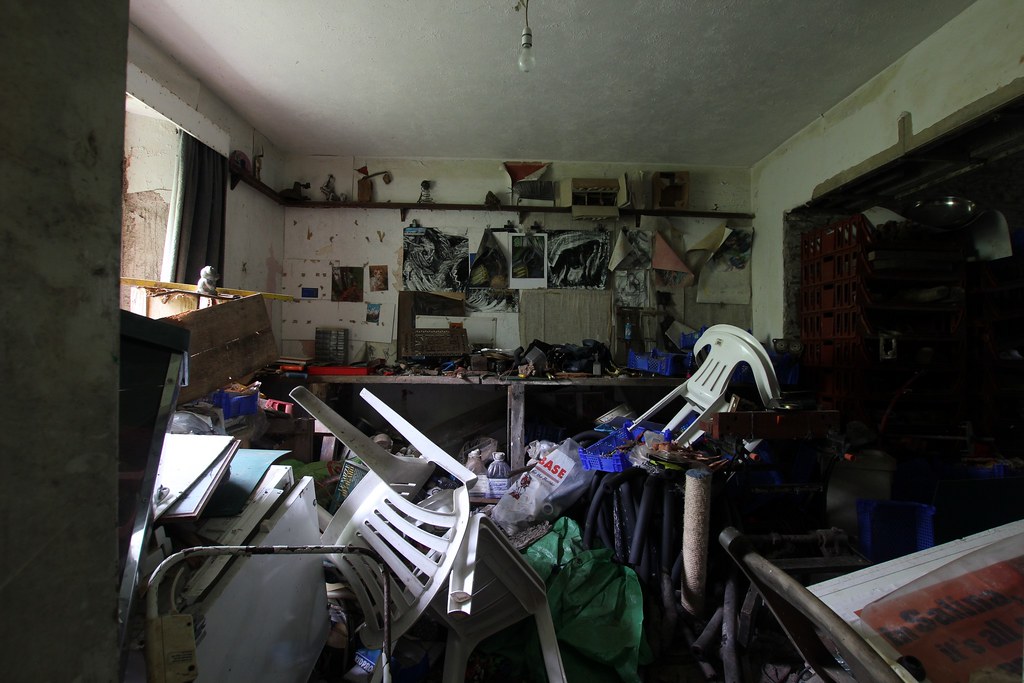 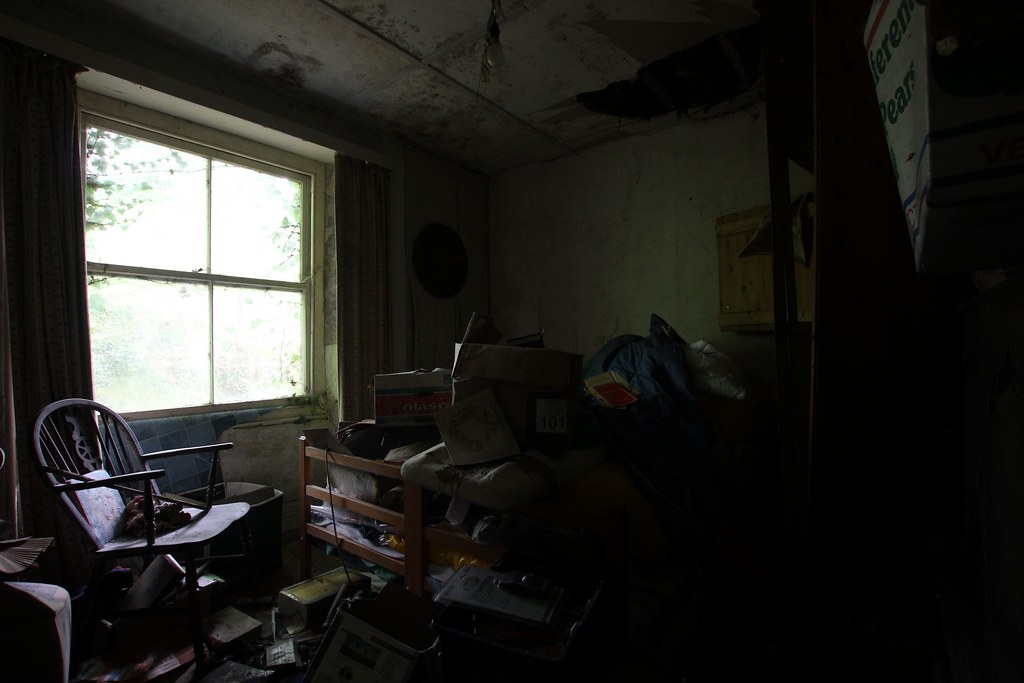 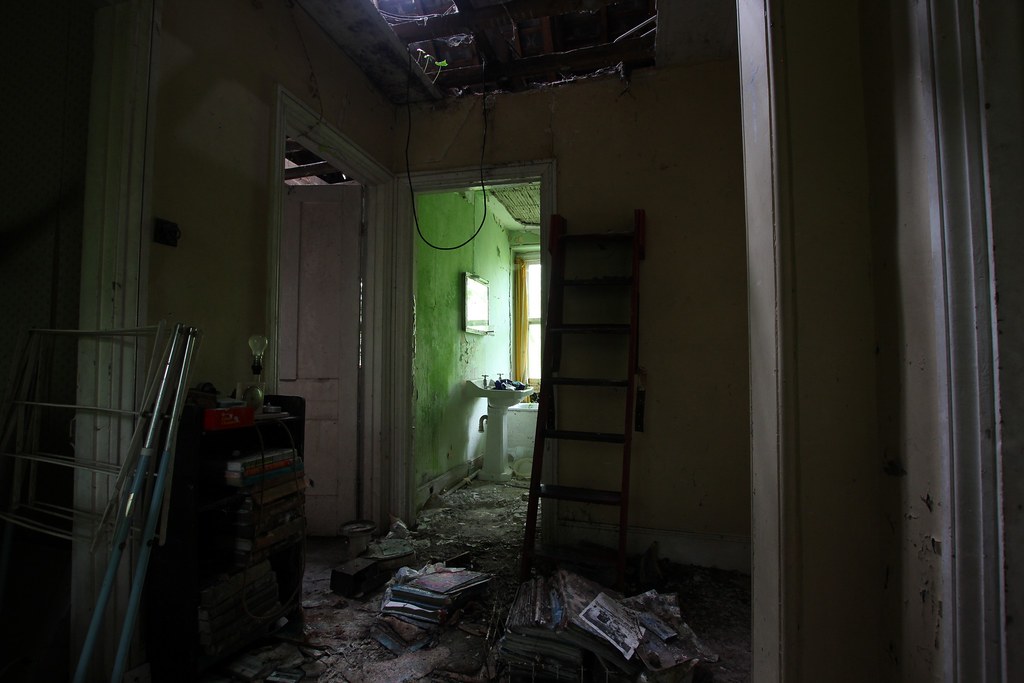 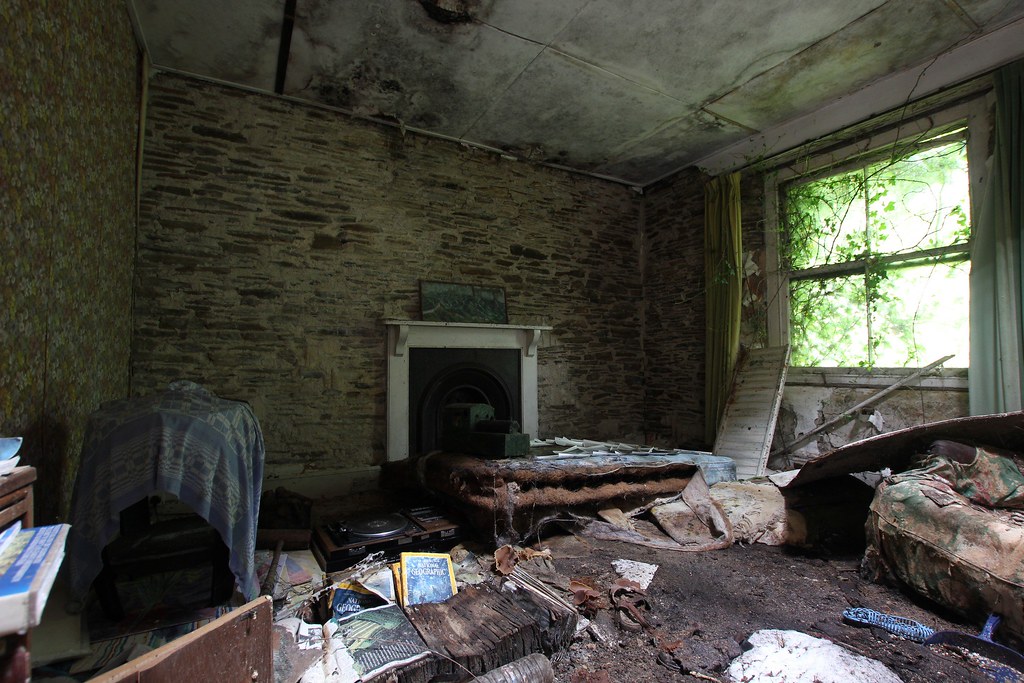 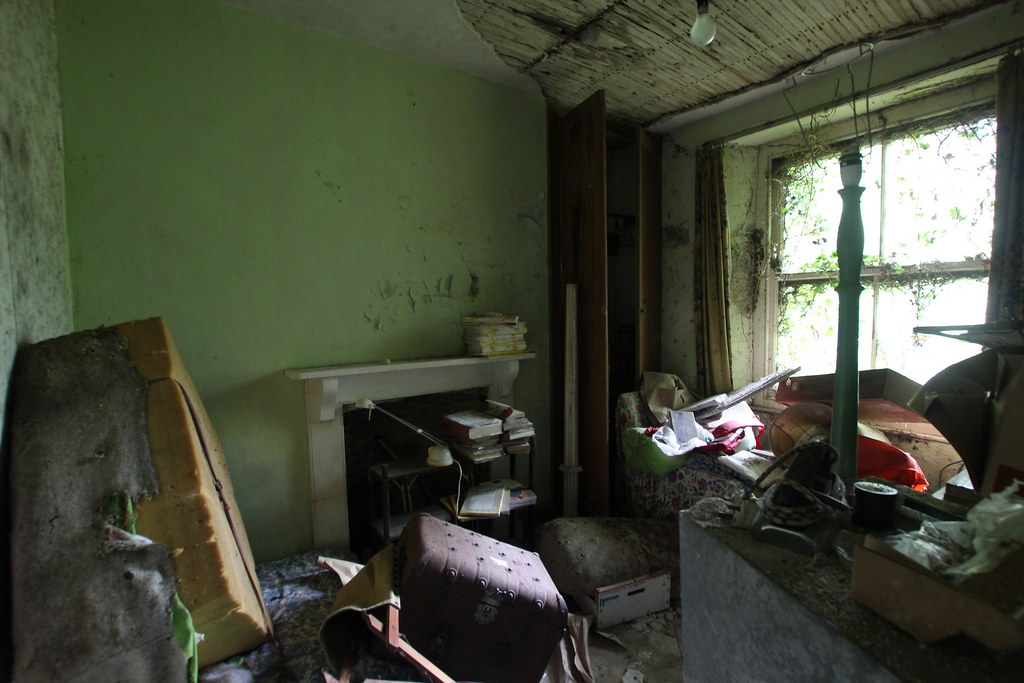 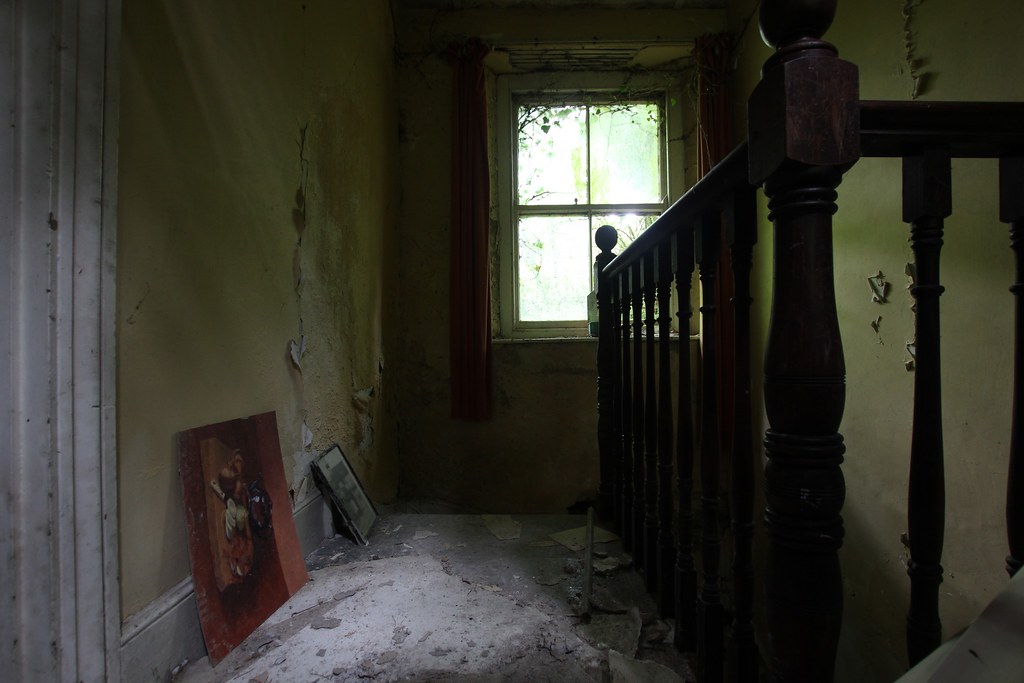 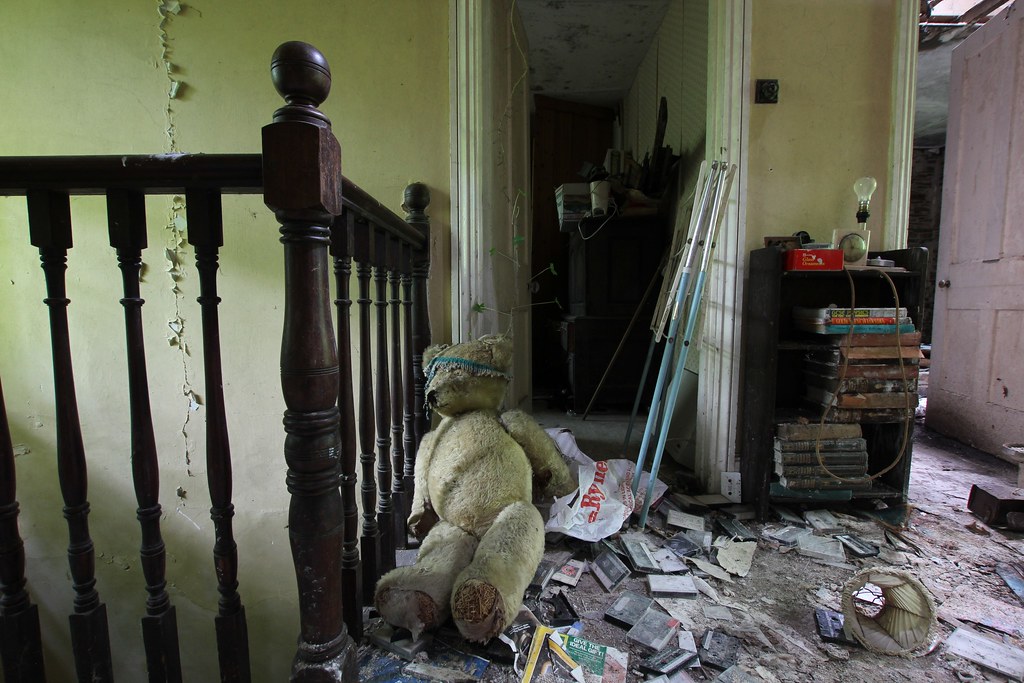 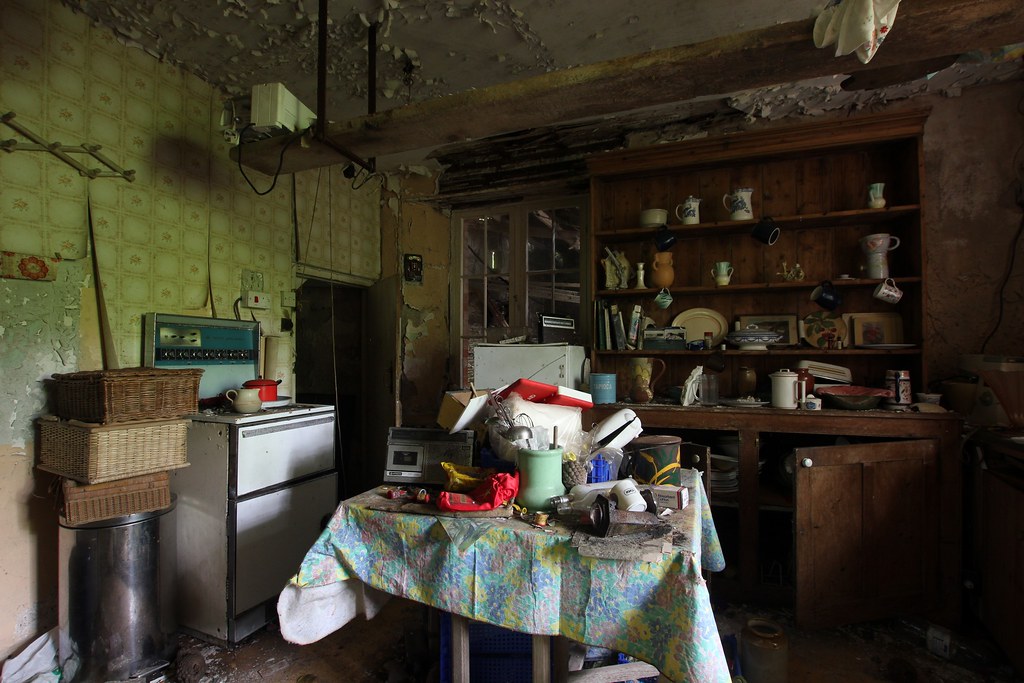 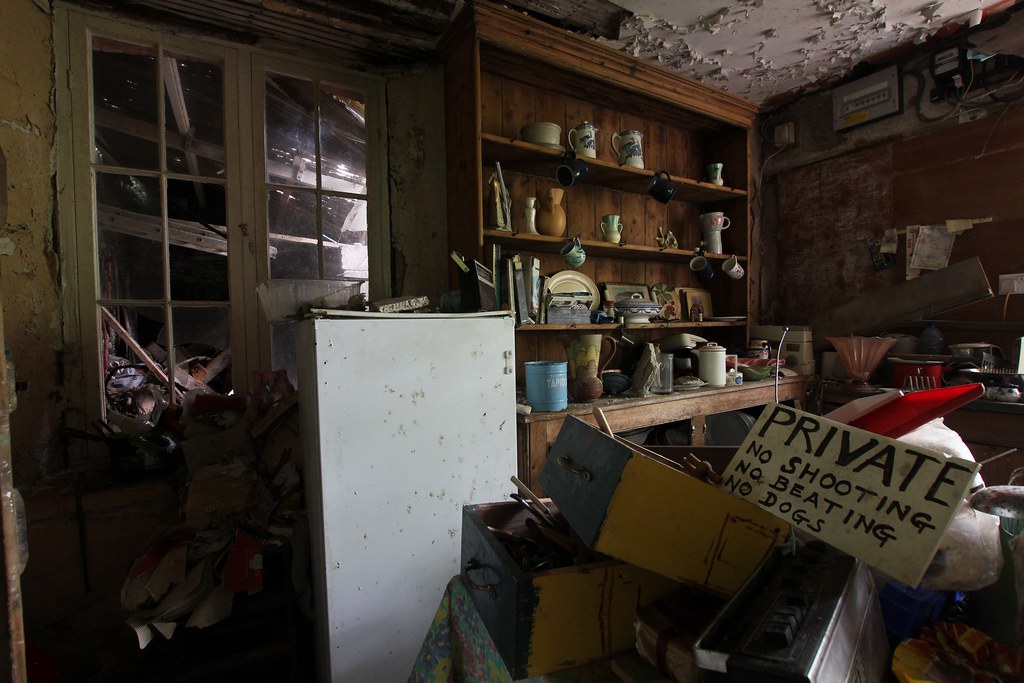 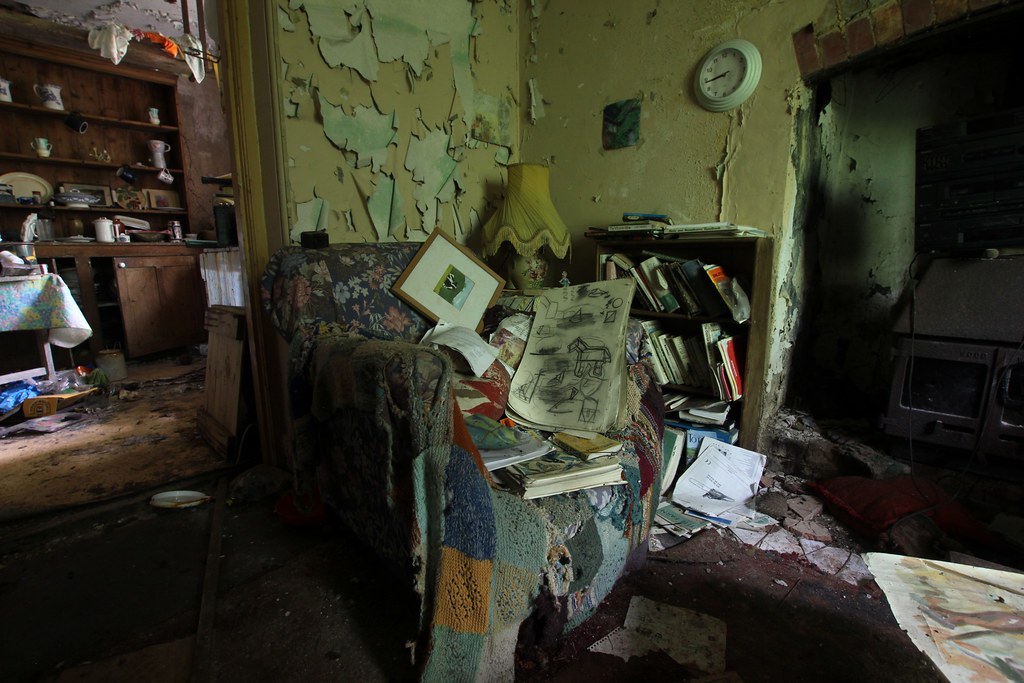 I don't know who you are anymore Mookster. I'm going to pretend you only went for the Landie.

Looks like someone used it as an art studio, out of the way and in a peaceful setting with a Land Rover just parked outside. Nicely done.

krela said:
I don't know who you are anymore Mookster. I'm going to pretend you only went for the Landie.
Click to expand...

I actually did only want to see it for the shot of the Landie outside! But I'm a sucker for a photogenic interior aha.

Interesting thing about the Landie,it was first registered 9 September 1994 but has never been MOT'd.Did you get its mileage?

That is well nice mate.love the decaying front room and colours.whilst you have gone on to houses I have drifted from them a bit but would still do them

I remember a convo with Mookster not long ago "I am never doing another residential again"...the man is weak. Nice set fella :-D

That is a fascinating place and a great set of pix.
T

oldscrote said:
Interesting thing about the Landie,it was first registered 9 September 1994 but has never been MOT'd.Did you get its mileage?
Click to expand...

nice pics, the landie is ex military (you can tell by the front spring hangers also the roof is not original) it was probably sold by the military in 1994 and given an age related plate by the DVLA.
D

Tigershark;353797the landie is ex military (you can tell by the front spring hangers also the roof is not original) it was probably sold by the military in 1994 and given an age related plate by the DVLA.[/QUOTE said:
A very well known vehicle put together for expeditions, but certainly not exmil. Only ex Mil item is the front bumper (a very cheap and common modification) with the four holes for the front tow hook. The roof is from a long wheelbase Safari or has had the Safari roof glass inserted in a standard roof - a simple job (done about nine roofs) and does give good light to the rear occupants. Chassis again is the heavy duty version of the standard unit, but you can only tell if it is ex Mil by the rear chassis cross member. On the military rear member there is no hole for the rear power take off and it has two substantial rear galvanised 'bumperettes' at each corner along with the four holes for the tow hook. The absence of the rear bumper fittings seems to indicate this is basically a bog standard civy vehicle. Certainly the front light fittings are not ex mil and the outer front wings do not have the rubber bump stops that prevent the front doors damaging the front wings, when they were opened fully forward. In the 70's and 80's I kitted out and prepared 8 Series 2A's and 4 Series 3's for expedition/desert touring use - after people had seen my own ex Mil 2a that I had toured the Atlas and fringes of the Sahara in. That journey was in itself a retrace of a trip done done by myself and seven friends during the summer of 1963 in a ex Mil Morris Commercial 1 Ton general service truck. In '63 we camped on the square of a village high up in the Atlas and were 'looked after' by a person who we thought was the parking attendant - there was a shrine up in the mountains that got lots of visitors from Rabat and Marrakesh. On my subsequent visit it turned out that he was the village elder or headman and when I gave him an album of photographs taken on my first visit, he insisted that my companion and I stayed with him and his family during our stay in the mountains. I am still in contact with the family even today!
Click to expand...

Wow, this site looks beautiful even before you get inside. The algae on that jeep is gorgeous. Great report. Thanks for sharing!
You must log in or register to reply here.