I've been keeping my eye on this place for MONTHS, finally somebody gained access and so I followed..

South Wolds Maintained Special school, which catered for children with emotional and behavioural problems, has stood empty after being closed in 2001 by East Riding Council on health and safety grounds.

Developers looking to build four homes worth about a million each on the land...


Although it's a characterless building, there are still some remnants of the past life it enjoyed, the gym, labs, private rooms and workshops all containing evidence of humanity. it's not in TOO bad a state, although halfway through I discovered the sign on this first picture that made me try to breathe a bit less! 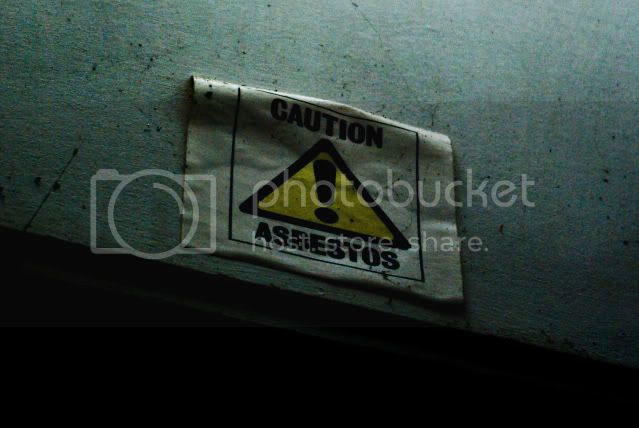 The school is in the middle of nowhere, a very tranquil explore.. 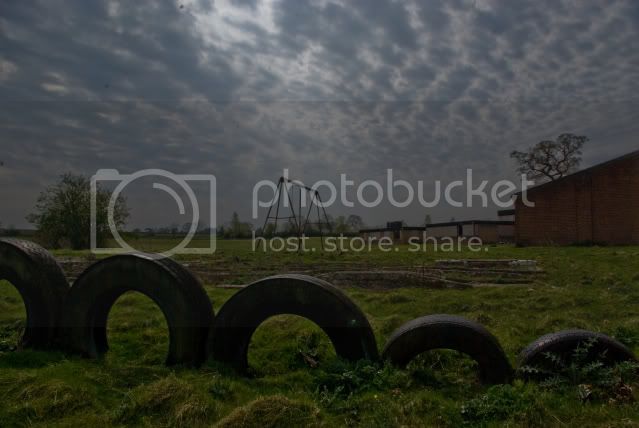 Chemistry labs, with acetic acid and Nitric acid left out..no wonder it was shut down for health and safety reasons.. 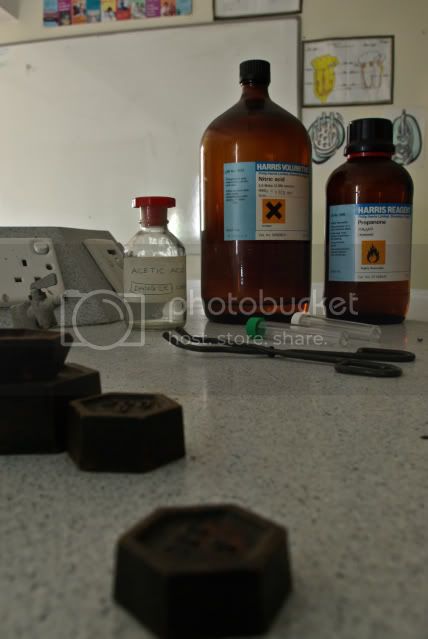 Still a decent five-a-side pitch if anyone's looking for a quiet place to play. 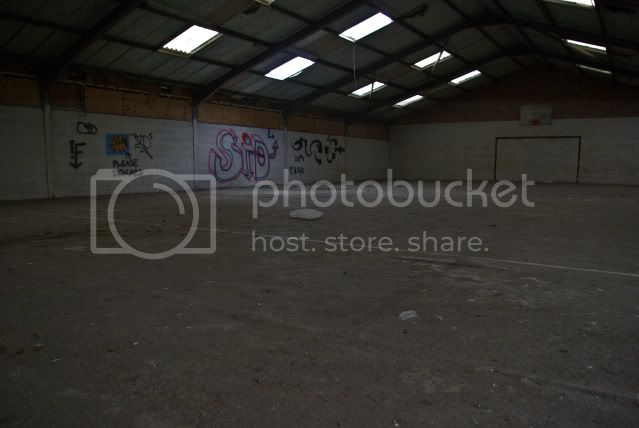 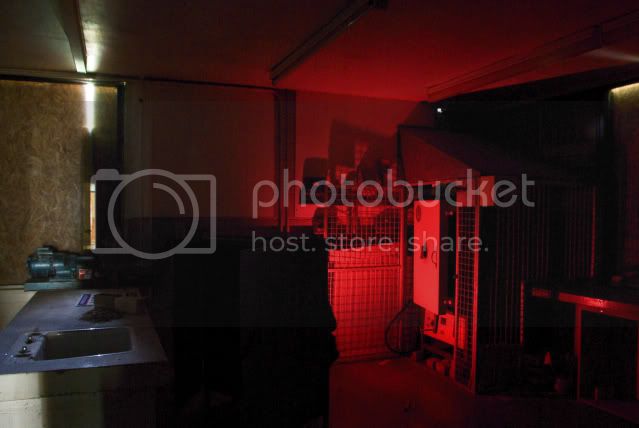 stacks of empty gas canisters left around.. why? 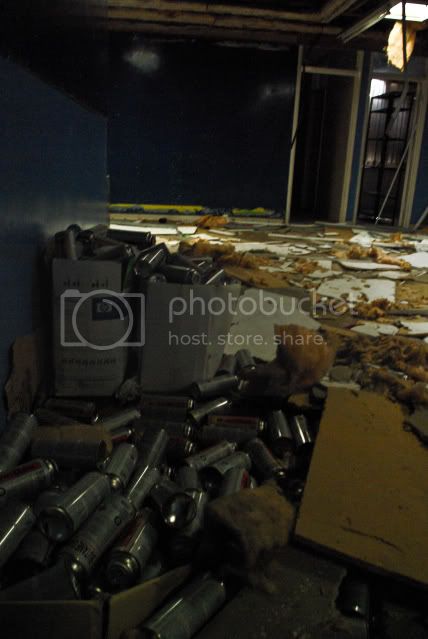 The gym's great, but the ropes are VERY dusty, I tried climbing and had to give up as I was basically breathing rope. (well, that's my excuse for not making it to the top, and I'm sticking to it!) 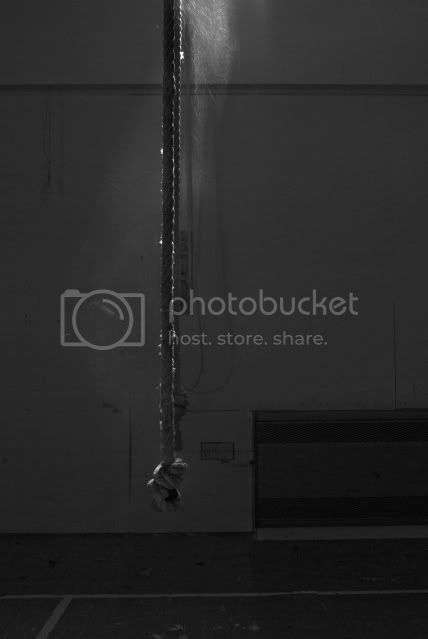 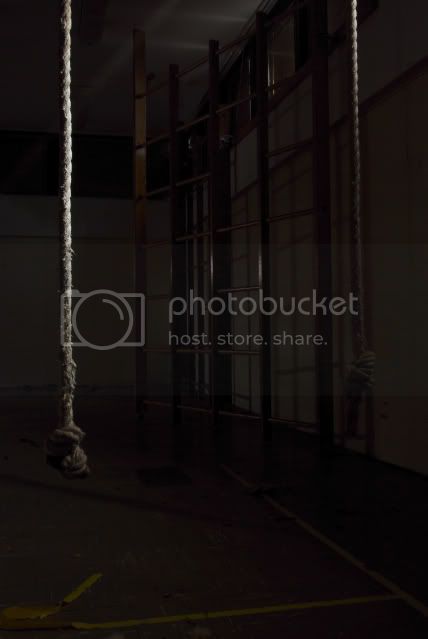 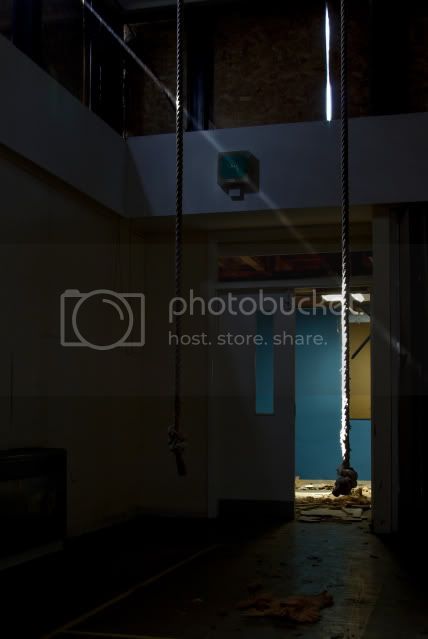 desk with safe under it.. (door pried off, and empty, in case you're wondering) 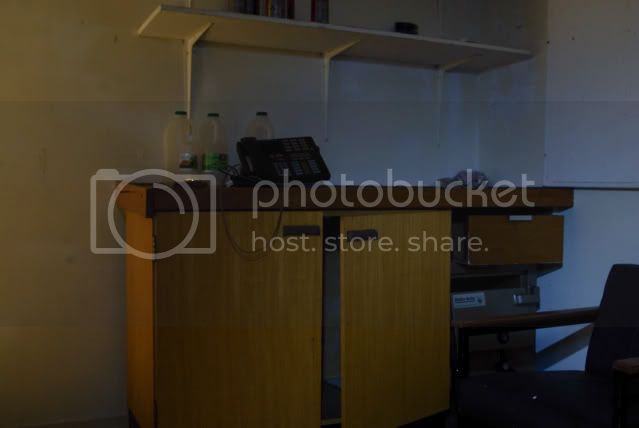 I REALLY hope this was an object lesson in spelling, PORRIAGE? MARRIGE? if not then they must've been special teachers too. 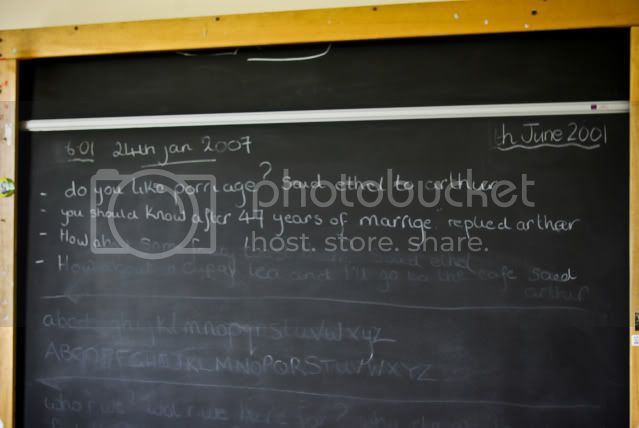 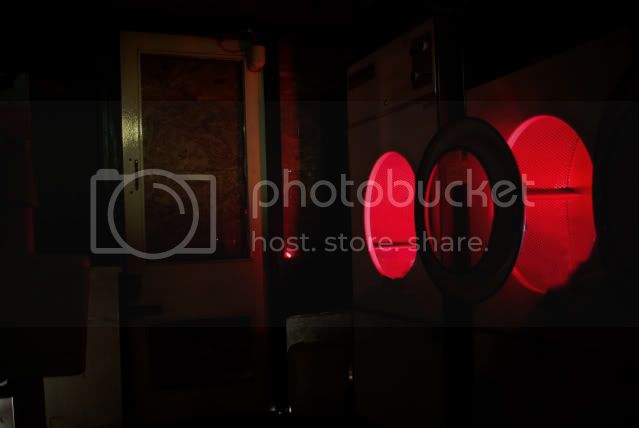 There are personal touches in the private rooms that give a hint of the kids who may have spent all their formulative years here. Sad really. 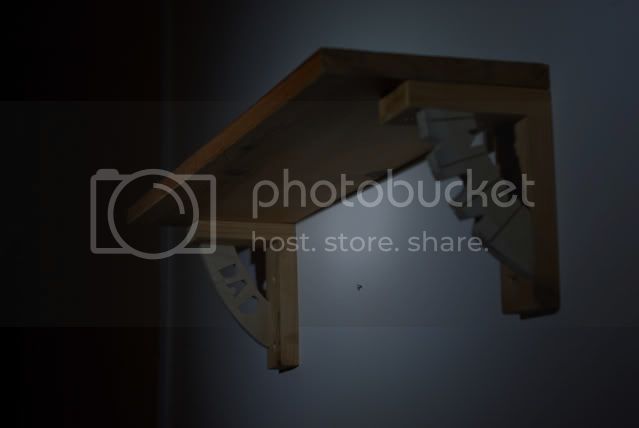 couple of pool tables, but no balls left.. 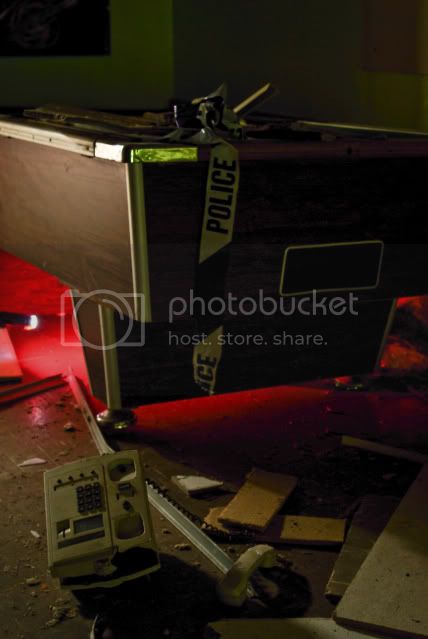 Mr Furry Monster - "STAY IN YOUR ROOM KEVIN"
Kevin - "NO" 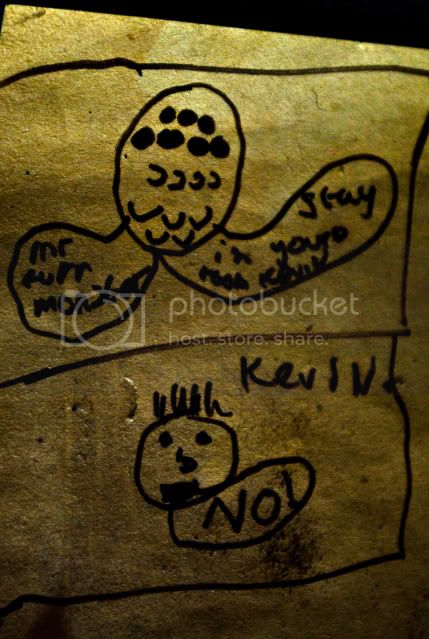 a book on "keeping a pony". not really necessary I'd think. 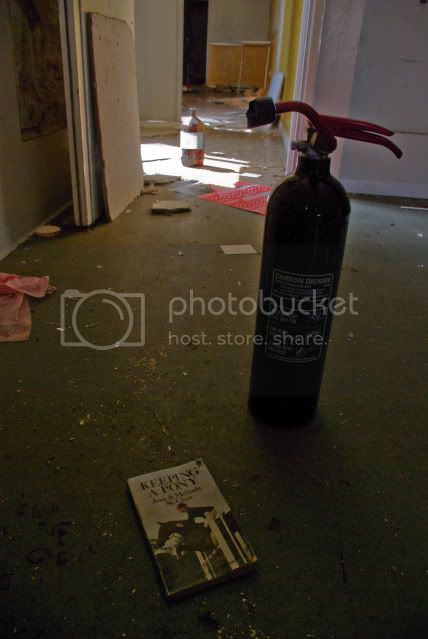 And then Halfway through the explore, all was going swimmingly, until in a pitch black section of the building, my torch picked out THIS... 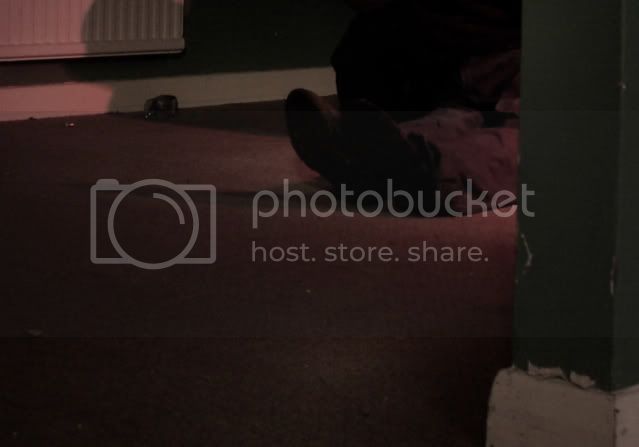 My heart nearly packed in and my pants nearly filled... I could only think, where's the way out, if he moves, I'm LEGGING it, i was CACKING! Thankfully, after staying ABSOLUTELY still for about a second (!) and examining the head, I noticed it was in fact a stuffed dummy, the kind used for (I presume) target practice, or stabbing with bayonets! There were a load of .22 spent bullets on the flor too, and behind the cabinet a load of cardboard painted targets, the type you find on a shooting range.. So my message to whoever left it there, if you wanted pant-soilage, you very nearly achieved it my friend! 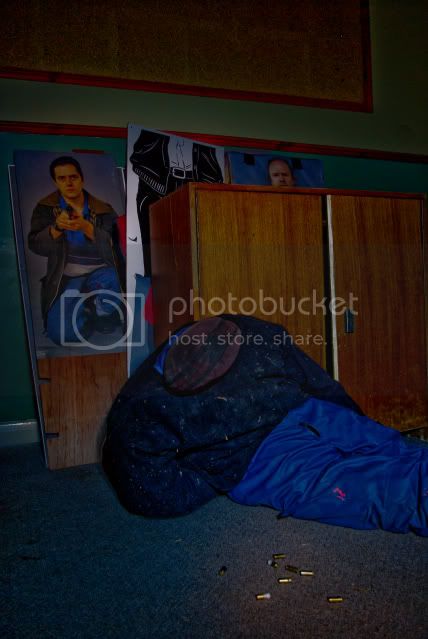 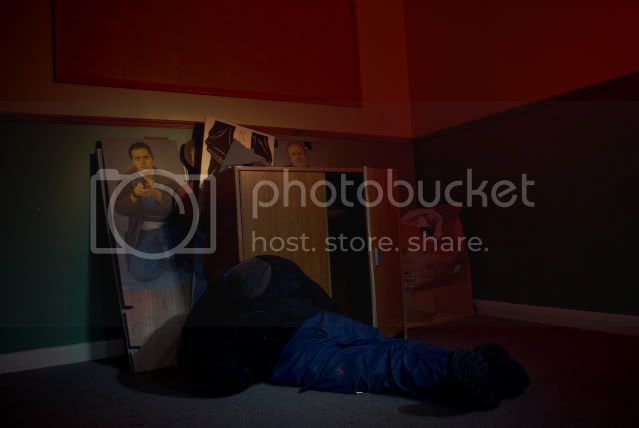 fortunately the facilities WERE there in case trouser soilage had occurred! 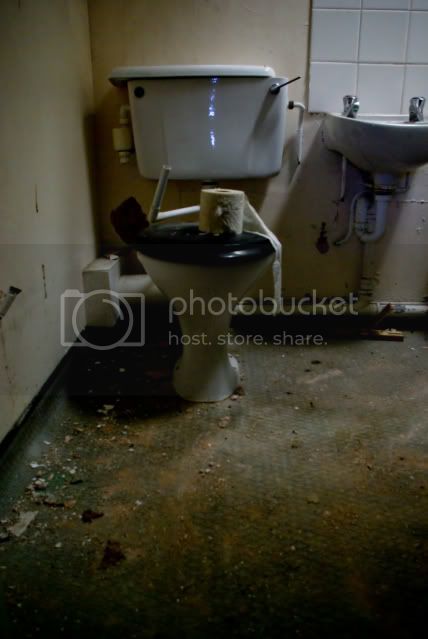 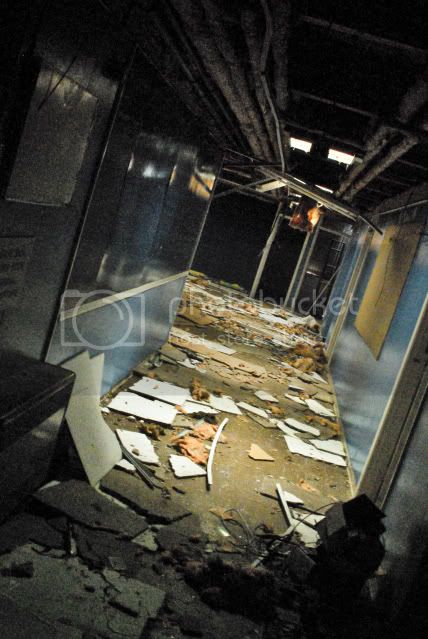 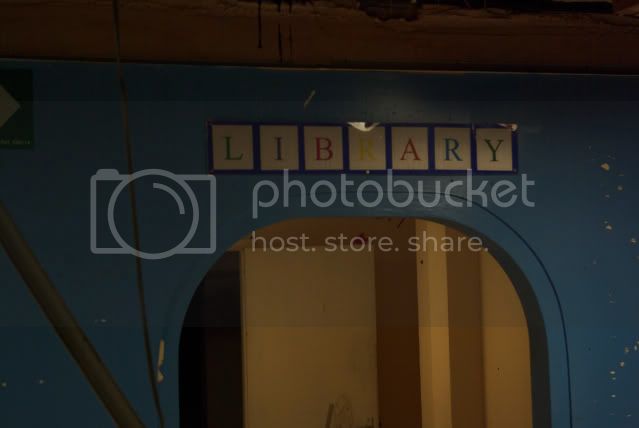 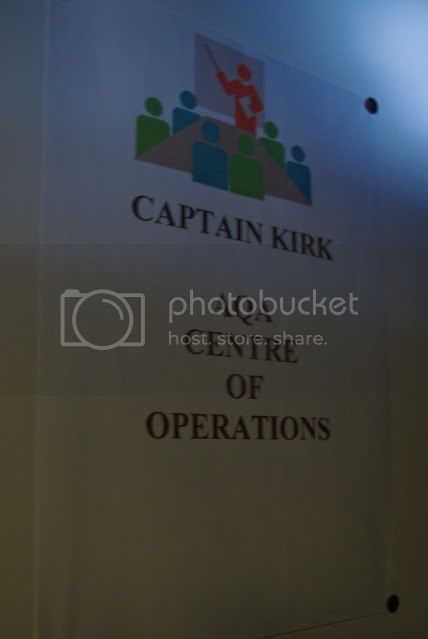 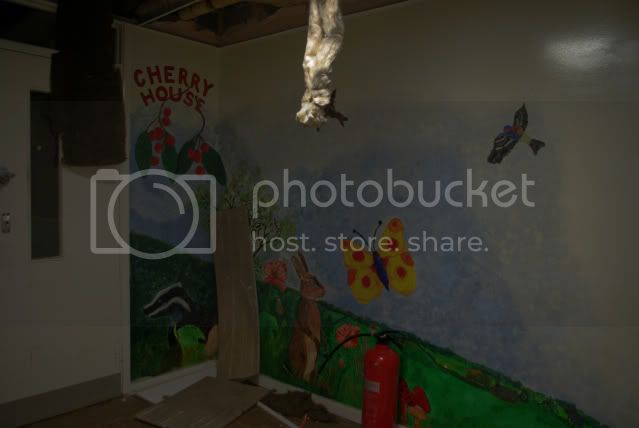 there ya have it!
R

Spot on, a great explore. Can't believe someone left a bottle of nitric acid lying about though, that stuff is lethal. Apart from anything else, it is a key ingredient of bathtub nitro glycerine.

Random said:
Spot on, a great explore. Can't believe someone left a bottle of nitric acid lying about though, that stuff is lethal. Apart from anything else, it is a key ingredient of bathtub nitro glycerine.
Click to expand...

hmmm.. interesting! there's a bathtub here too, think i might take my mixing stick and conduct some experiments!!
R

Well, I've never tried it, but Brad Pitt said it on Fight Club so it must be true.

"Render fat, and skim the layer of glycerine off the top, mix it with nitric acid to make nitro glycerine...add a pinch of sawdust and you have dynamite"

Don't try this at home, kids

haHaa, that's a RECIPE right there!

now.. who do i have grievances with?

I get so annoyed that these special schools are all being shut down. They do an excellent job and all this 'integrating into the mainstream' is just an exercise in cost-cutting imo, and yet more kids get lost in the system.
Anyway, rant over...

...excellent find nonetheless, cactus. Seeing the pic of the legs really made the back of my neck crawl...I dread to think what it did to you!

Thats the kind of thing that makes your heart stop beating. It happend to me before but turned out it was just another group of explorers cruching the light bulb filliments!

Brilliant shots Catus! that Dummy would have given me a serious brown trouser moment too!:shocked:

what an ace explore. my sister moved to beverley a few years back and she said there nowt up there. although she did say the other day that one of the hospitals is closing soon. i couldnt tell you the name though.

and whats 'the black mill' up on the westwood? looks interesting to me from photos ive seen where its been in the distance.

Anthillmob74 said:
what an ace explore. my sister moved to beverley a few years back and she said there nowt up there. although she did say the other day that one of the hospitals is closing soon. i couldnt tell you the name though.

and whats 'the black mill' up on the westwood? looks interesting to me from photos ive seen where its been in the distance.
Click to expand...

The hospital that's closing is Princess royal, (tighter than a duck's backside at the mo since parts of it are still operational), and the black mill is just that, a black mill, twas built in 1803, but sealed up now too.... (attracts the LOONIES once a year too!) check the link below!

aww broken link. shame id like to see what the loonies get up to.

oops, sorry, here it is again..

thank you. my sisters never mentio0ned it, i shall mention it to her when i next speak to her. its very 'wicker man', right up my street!

maybe she didn't mention it 'cos she doesn't want everyone to KNOW what she gets up to....

i asked her and she said its not just this particular time, they be doing odd thiungs up there on and off all year.
R

I went to south wolds as a kid. I spent nearly 6 years there until i left school. Id get picked up in a taxi on a sunday night and stay through the week, home on friday. I loved it there. Staff were mostly great .especially considering what they sometimes had to deal with. I'd go back tomorrow if i could. Its a real shame to see the place in such a state but the walkthrough brought back memories. It is in a beautifully quiet location and has quite large grounds. We used to work in the summer building hides and ponds near the nature trail. Good days.