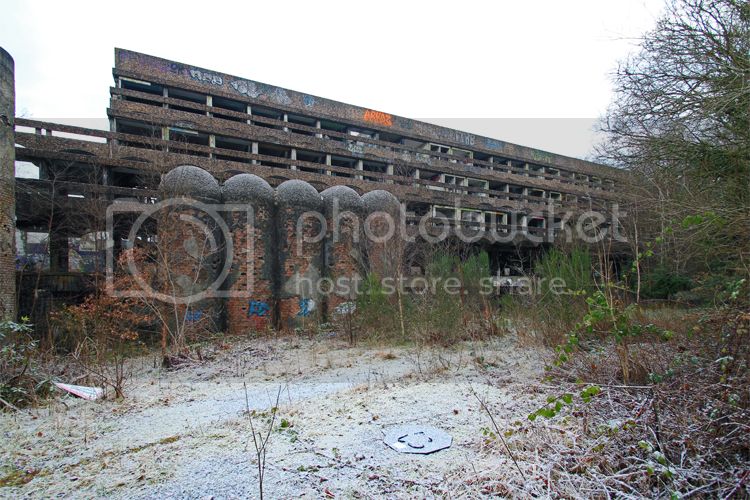 St. Peter's Seminary is a disused Roman Catholic seminary near Cardross, Argyll and Bute, Scotland. Designed by the firm of Gillespie, Kidd and Coia, it has been described by the international architecture conservation organisation DOCOMOMO as a modern "building of world significance". It is one of only 42 post-war buildings in Scotland to be listed at Category A, the highest level of protection for a building of "special architectural or historic interest". It has been abandoned since the end of the 1980s, and is currently in a ruinous state. Despite a number of proposals for reuse or renovation of the building, its future remains insecure. 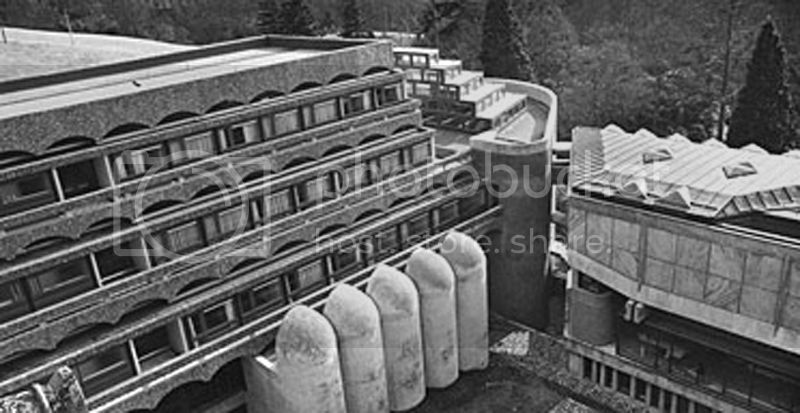 Following a fire in 1946 at St. Peter's Seminary in the Glasgow suburb of Bearsden, a new home was needed for the seminary. Discussions began with Gillespie, Kidd & Coia in 1953, but the plans for a new college in the village of Cardross were not finalised until 1961, when building began. The plan was for a new building at Kilmahew House, which was being used as a temporary home. The 1865 house would become professorial accommodation, and around it would wrap a main block, a convent block, a sanctuary block and a classroom block. 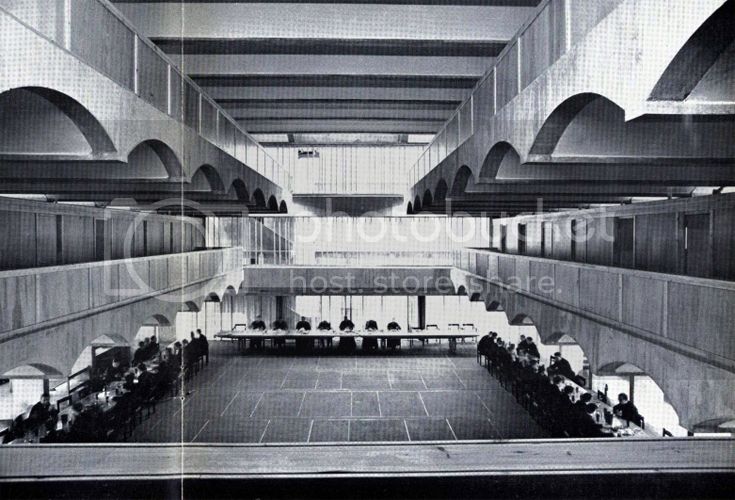 Determinedly modernist, brutalist and owing a huge debt to Le Corbusier, the building is often considered one of the most important modernist buildings in Scotland. "The architecture of Le Corbusier translated well into Scotland in the 1960s. Although the climate of the south of France and west of Scotland could hardly be more different, Corbu's roughcast concrete style, could, in the right hands, be seen as a natural successor or complement to traditional Scottish tower houses with their rugged forms and tough materials", wrote Jonathan Glancey. Filmmaker Murray Grigor made a documentary about the building entitled Space and Light, while Glasgow artist Toby Paterson has painted it. 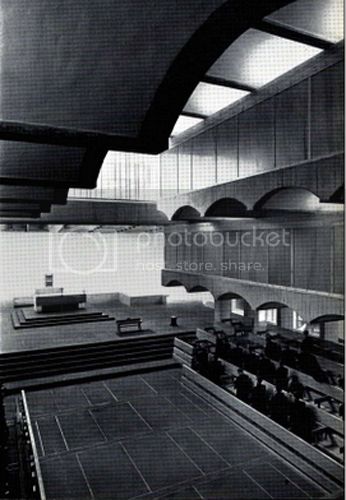 By the time it was completed in 1966 the number of candidates entering the seminary had decreased. As a result, the building never reached its full capacity of 100 students. From the outset, the building was riddled with problems, including maintenance difficulties with such a unique structure and significant water entry; the architects and owners each blamed the other for these problems. 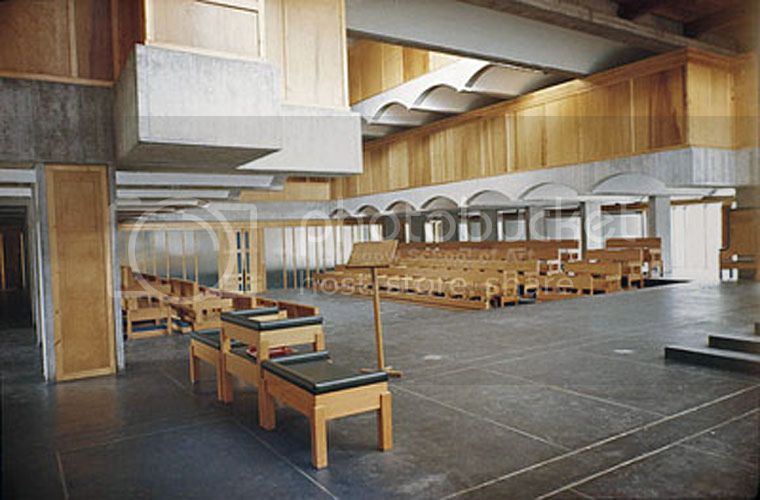 In 1980 the building closed as a seminary, subsequently becoming a drug rehabilitation centre. However similar maintenance problems remained and it was finally vacated by the end of the 1980s. In 1995 a fire so badly damaged Kilmahew House that it had to be demolished. The building was Category A listed by Historic Scotland in 1992, and in October 2005 was named as Scotland's greatest post-WWII building by the architecture magazine Prospect.

Nonetheless, the building remains a ruin. Much of the woodwork is now gone although hints of the original design still remain. According to the architecture writer Frank Arneil Walker, "nothing prepares one for the sight of the new grown prematurely old." Attempts to convert and reuse it, or even protect it from further damage, have come to nothing – hampered by the unique design of the building and its remote location. Plans have included building a 28-unit housing development in the building's grounds, and stabilising the structure by stripping it back to its concrete skeleton, possibly fully restoring a small cross-section. This is a source of concern for conservation bodies including the Twentieth Century Society, who have placed it on their Risky Buildings Register, arguing that this would destroy much of the remaining fabric of the building.

In June 2007 it was announced that the building was to be included in the World Monuments Fund's 100 Most Endangered Sites list for 2008. Also in 2007, developer Urban Splash became involved. Although no firm proposals have been put forward, Urban Splash have continued to work with architect Gareth Hoskins, and in 2009 community arts group NVA were awarded a grant by the Scottish Arts Council to develop temporary and permanent artworks as part of the redevelopment of the building and surrounding woodlands. In 2012, the Scottish Government gave £500,000 for the building's regeneration by a Historic Scotland building grant.

This explore wasn’t planned as so many aren’t, while driving to work I got a phone call to say it had been postponed for at least a day, I was 200 miles from home and 200 miles from work and didn’t fancy wasting fuel, so stopped in the Hotel Punto for the night, woken up hourly by the local petrol heads who thought it funny to sound the horn and spin their cars next to mine!

I’d tried to find St Peters Seminary before, but fading light and heavy rain meant I’d left it for another day. At least I knew where it was, so got up early and wandered in. It was a great stroll in, the woods were full of deer, passed a badger on its way home and saw a fox slipping into the seminary just as I arrived.

To be honest the place is gutted, architecturally it’s not really my cup of tea, but it was an interesting place to pootle around for a few hours, so on with the pics from the top down. 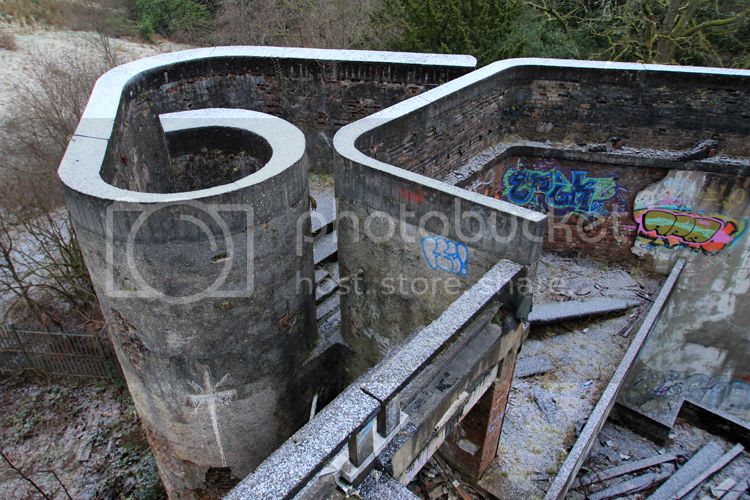 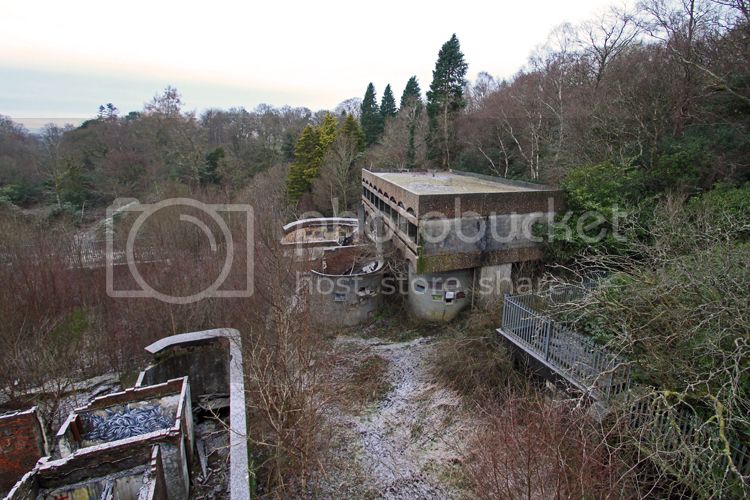 This must have been an impressive space in its time. 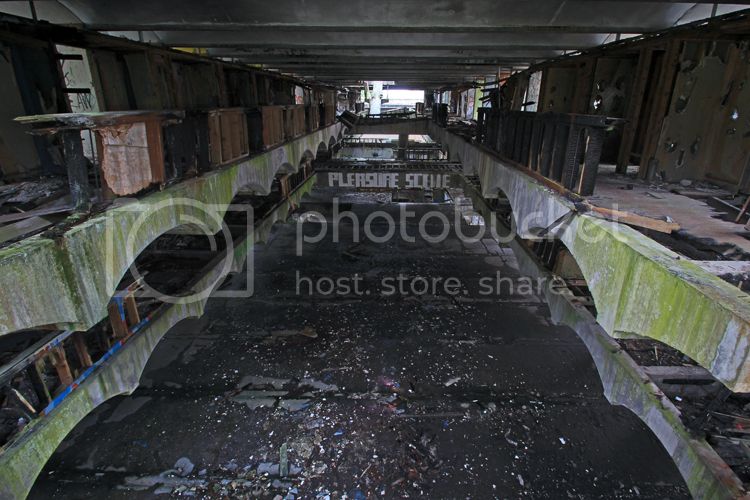 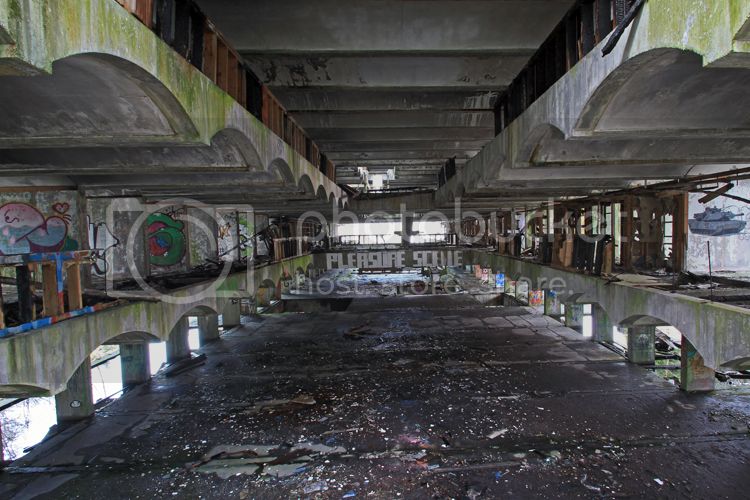 View down to the alter, a subliminal messages written on the wall. 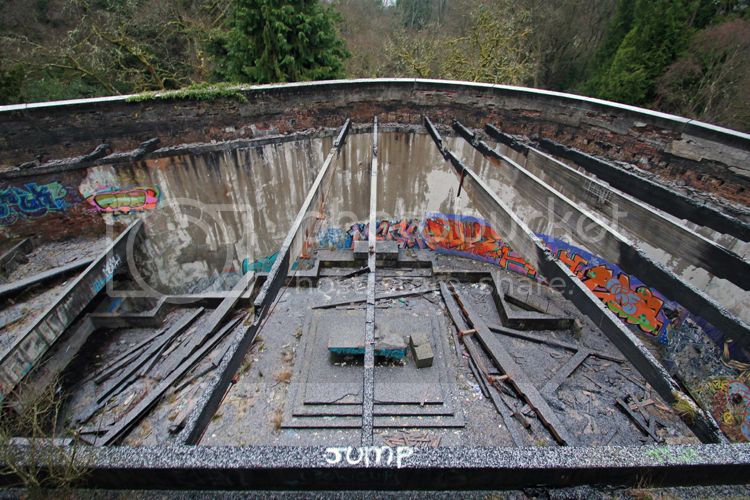 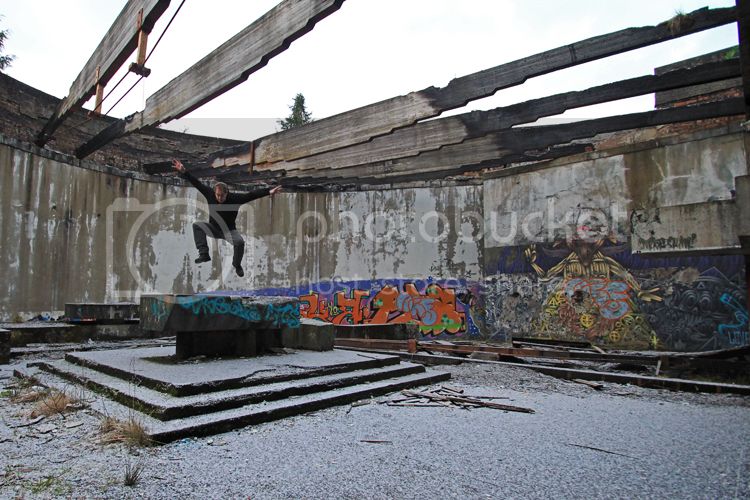 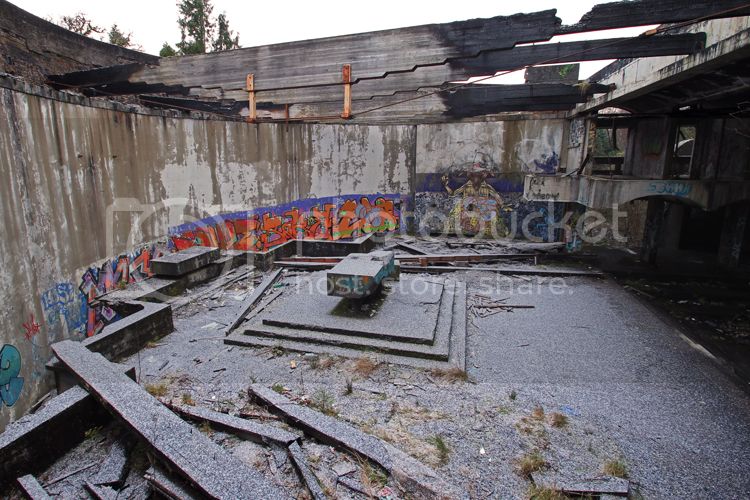 Not a huge fan of graffiti, but some reasonable attempt here. 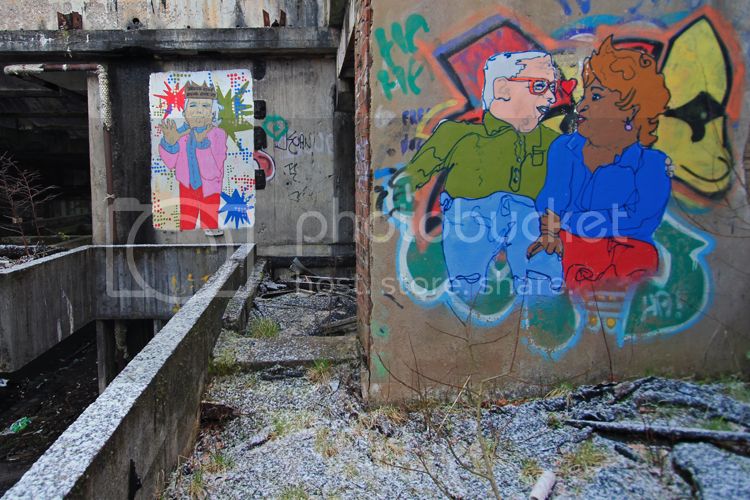 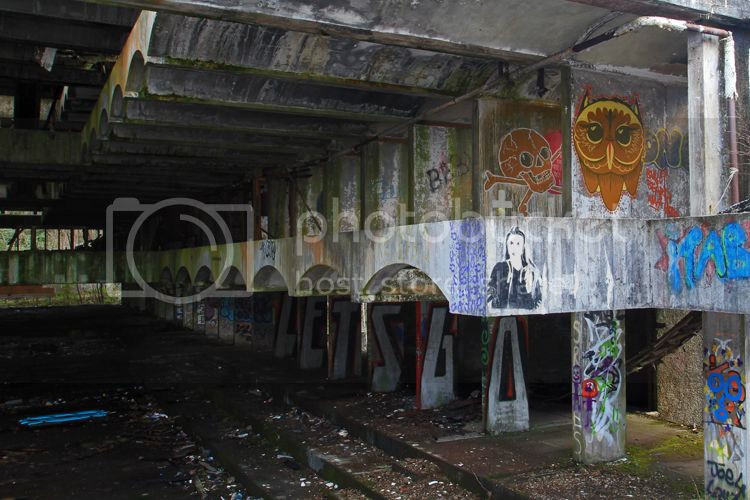 Even the odd bit of original artwork remains intact, but tagged. 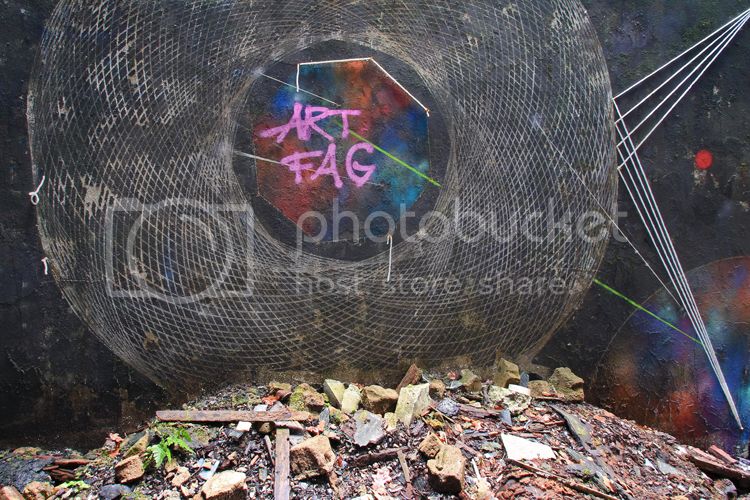 A final mooch on the lower floor and passages. 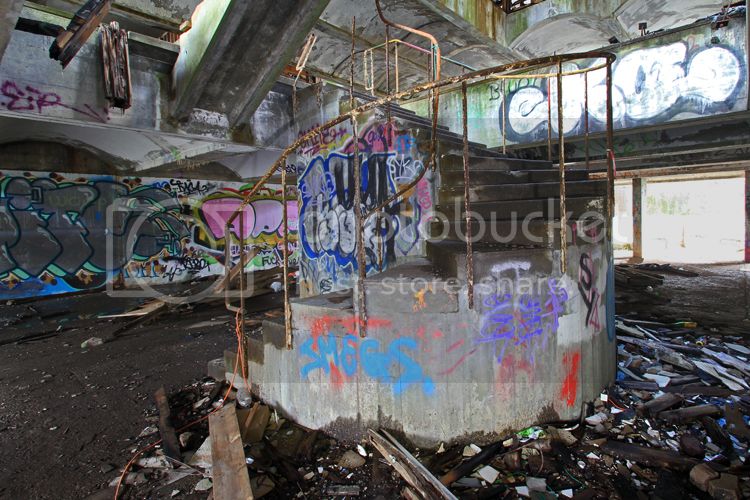 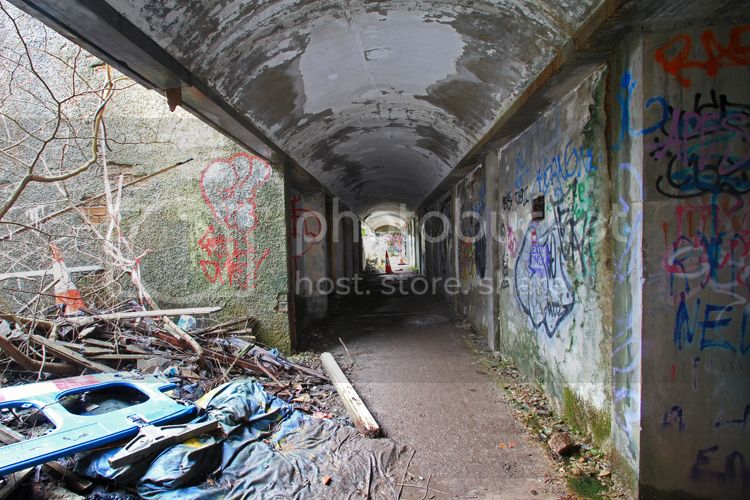 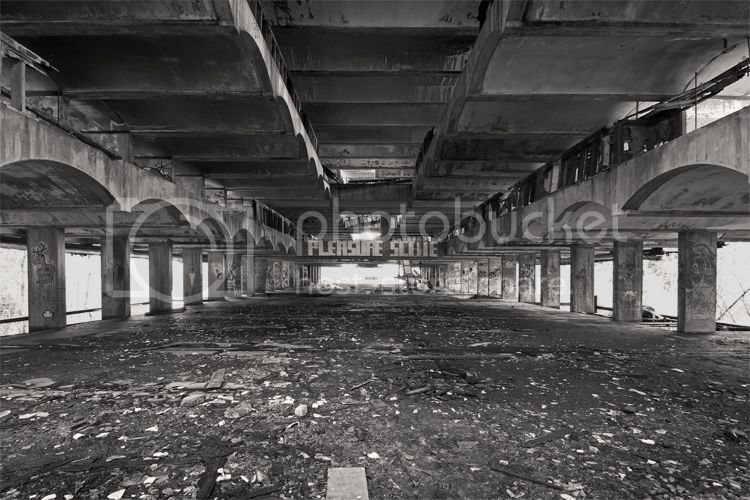 I never did see my fox again, possibly the granny with the crossbow got it? 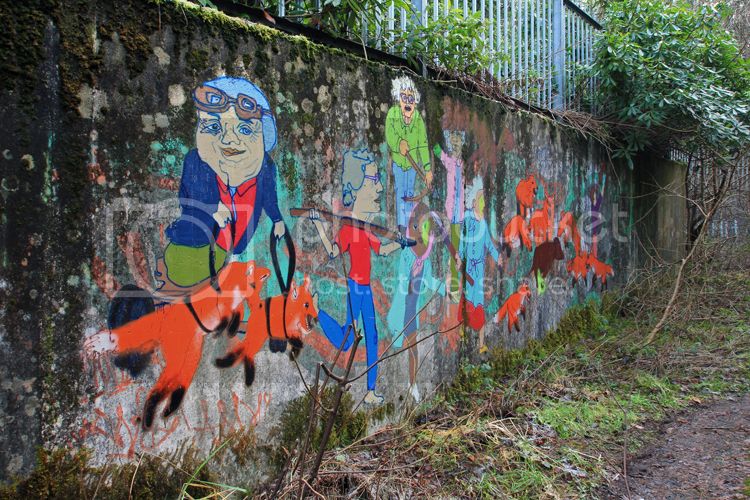 On the way back to the car I passed a couple of women collecting fire wood, they assured me that they had permission from the church to do so, I told them it was OK as I was only taking photos and didn’t have permission to do so. It turned out one of the woman’s mums had worked at the seminary and had told her of a secrete hermits cave in the grounds that the priests use to pray in. I’d have tried to find it, but as I had no idea where my phone was decided it was better to check the car as I was waiting for a call.

Well that’s it, a pleasant few hours wandering around what must have been a grand building in its time.

Ok, its a bit 'modern' and quite trashed, but I really like this! Some nice graf in there...
F

Cheers, well trashed and fairly modern, but an interesting wander if you're in the area