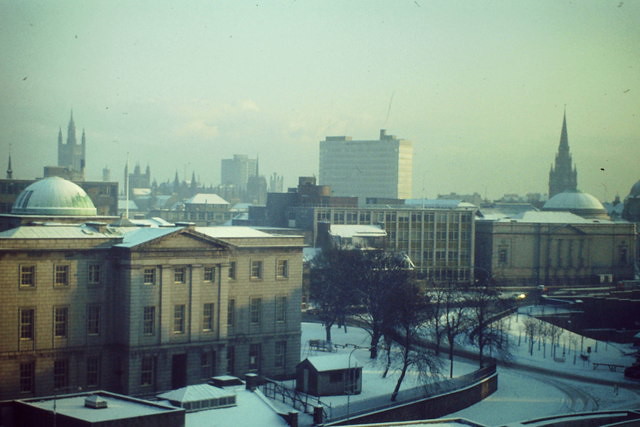 Woolmanhill Hospital was the original Aberdeen Royal Infirmary, before this moved to the Foresterhill site. The original hospital building on the site was begun in 1740. Designed by William Christall, it opened in 1749. The Royal Infirmary, was rebuilt between 1833 and 1840, in the Grecian style, at the cost of £17,000.[4] The Simpson Pavilion (1833−40), designed by Aberdeen architect, Archibald Simpson is one of the last surviving examples of a pre-Nightingale style of hospital design. Additions were made to the building in 1844 and following a fire in 1849 it was repaired and subsequently extended. In 1887, new buildings, designed by W. & J. Smith & Kelly were constructed to the north of the site. This Jubilee Extension provided a new surgical block, medical and pathology block and laundry blocks. The 1840 building was converted into an administrative and clinical area and also provided accommodation for nurses. The mid nineteenth century additions to the Simpson Pavilion were removed as part of this extension work. After the First World War, further expansion was required but the confined nature of the site made this impractical and in 1923 the site at Foresterhill was acquired. Since then, the future of the Woolmanhill site has been uncertain. The building was designated a Category A listed building on 25 May 1977. 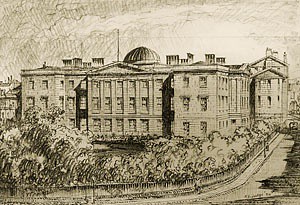 In 1999, NHS Grampian was granted permission to close the hospital. A phased closure began and was originally due to be completed by the end of 2013. Departments moved to various locations in Aberdeen, including the new Aberdeen Community Health and Care Village, Aberdeen Royal Infirmary and Woodend Hospital. In May 2013 the adult diabetic services moved to the David Anderson Building on Foresterhill site. There are now no in-patient beds in Woolmanhill. Until recently , it housed several out-patient departments including physiotherapy and the genito-urinary medicine clinic. Other clinics were regularly held in the two Medical Out-Patient Departments in Woolmanhill. There was also a research unit for osteoporosis, an X-Ray and ECG on site. Also located at Woolmanhill is the health archives department, which includes historic medical records from patients across the NHS Grampian area. As of March 2015, both the ear, nose and throat (ENT) and audiology Departments remain at Woolmanhill, with plans to move these services to Woodend Hospital in 2016. After the remaining services had moved out, the hospital was left vacant in 2017. 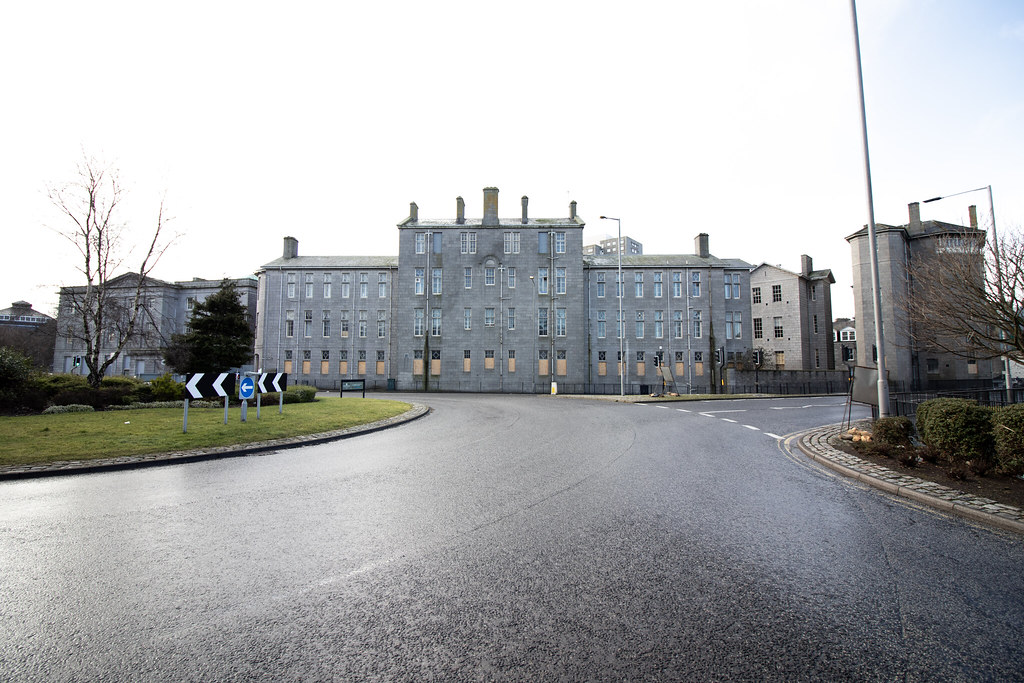 The building we explored from the roundabout outside.

Everything was finally looking promising as it didn't seem that any workers were in this building. We spoke too soon. Moments later, we had triggered a PIR somewhere on the dark, bottom floor and moved to the top floor to wait out the expected search. From what we assume, this worked out well for us because someone came inside our section, before leaving quickly. We had no issues with alarms following, so it seems that whoever monitors them thought that a worker had accidentally set one off and then proceeded to switch them all off. Here is what we managed anyway, I advise reading @Brewtal 's ace report which covers every inch of the property. 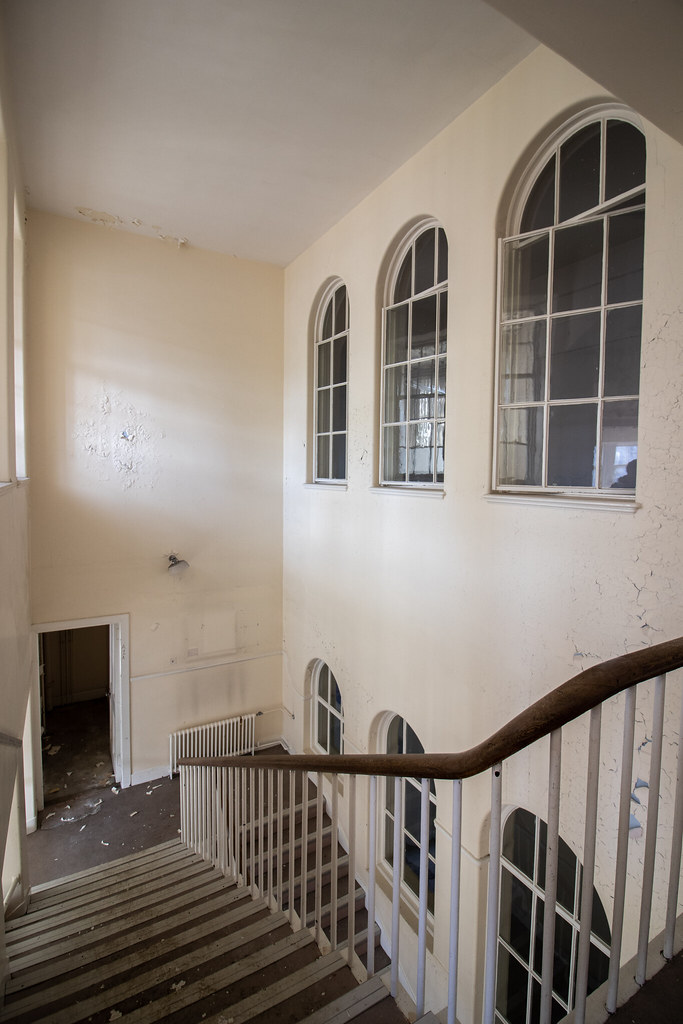 On the top floor there was little of anything, but some nice, minimalistic decay. 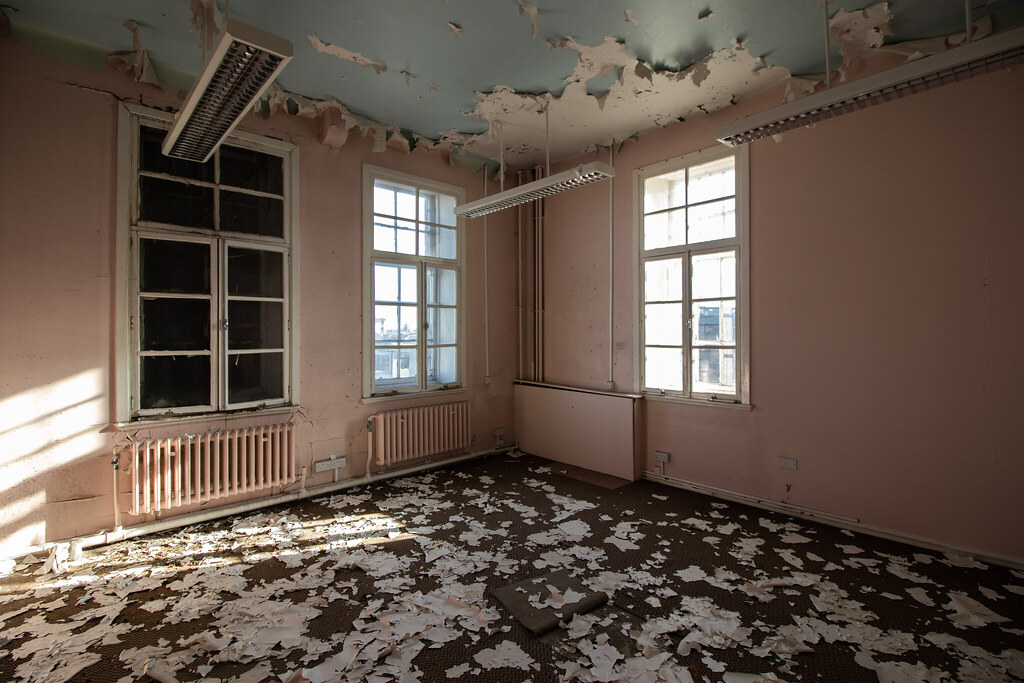 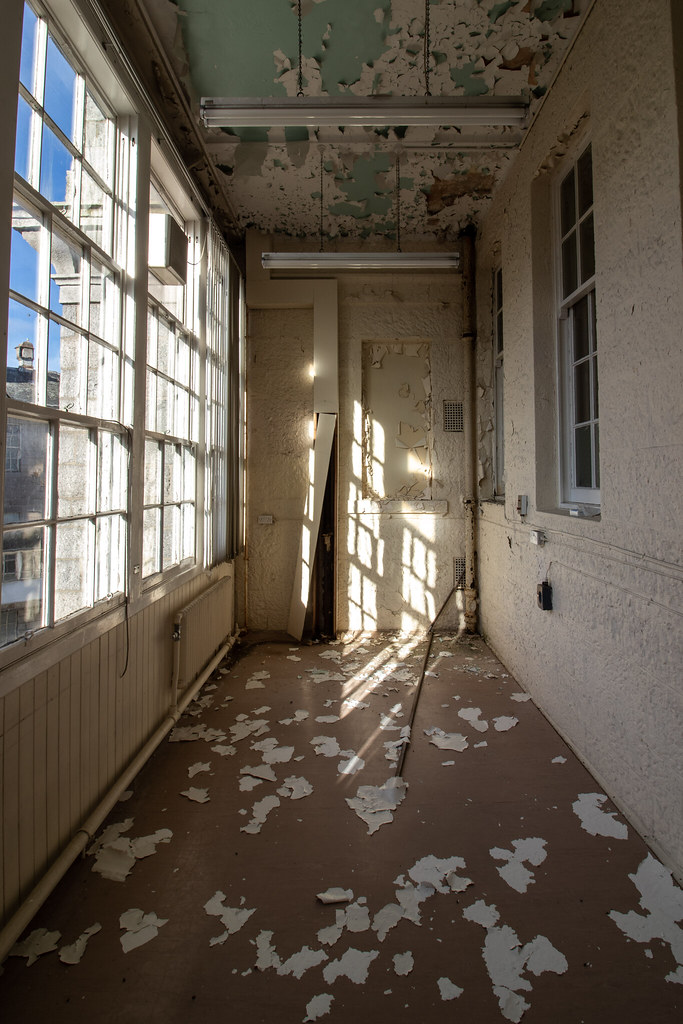 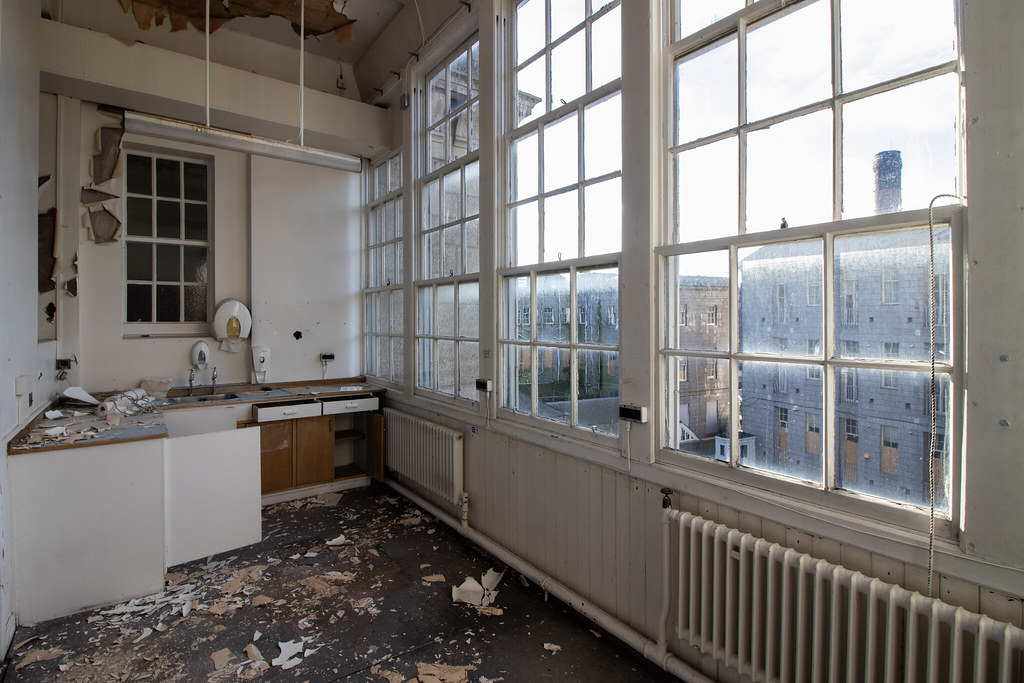 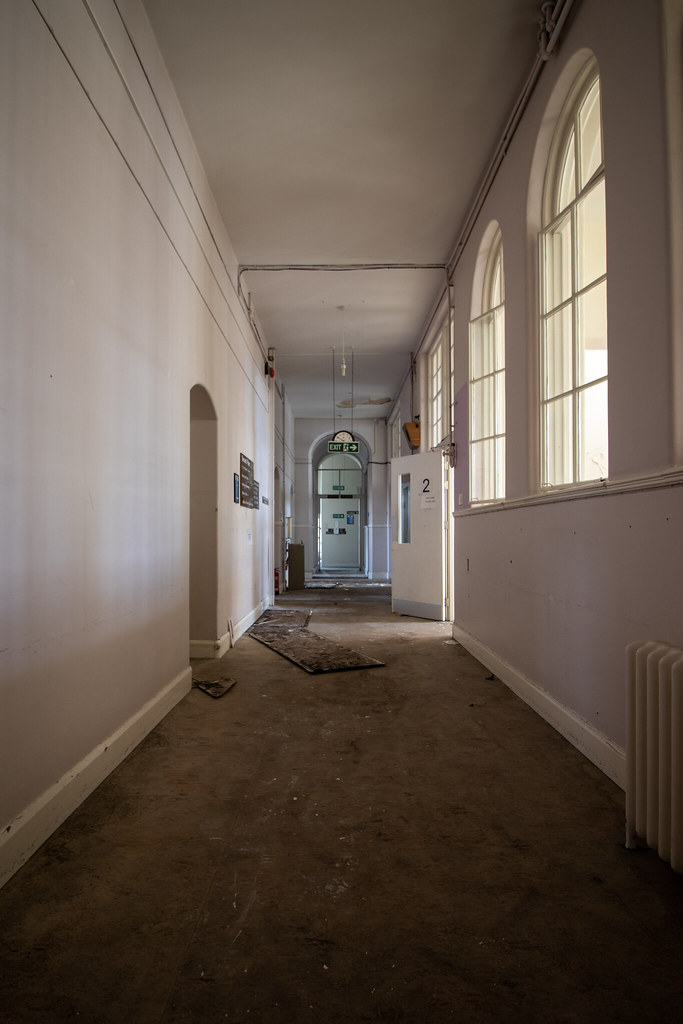 The corridors were nice and high, with old school hanging clocks - some of which still worked. 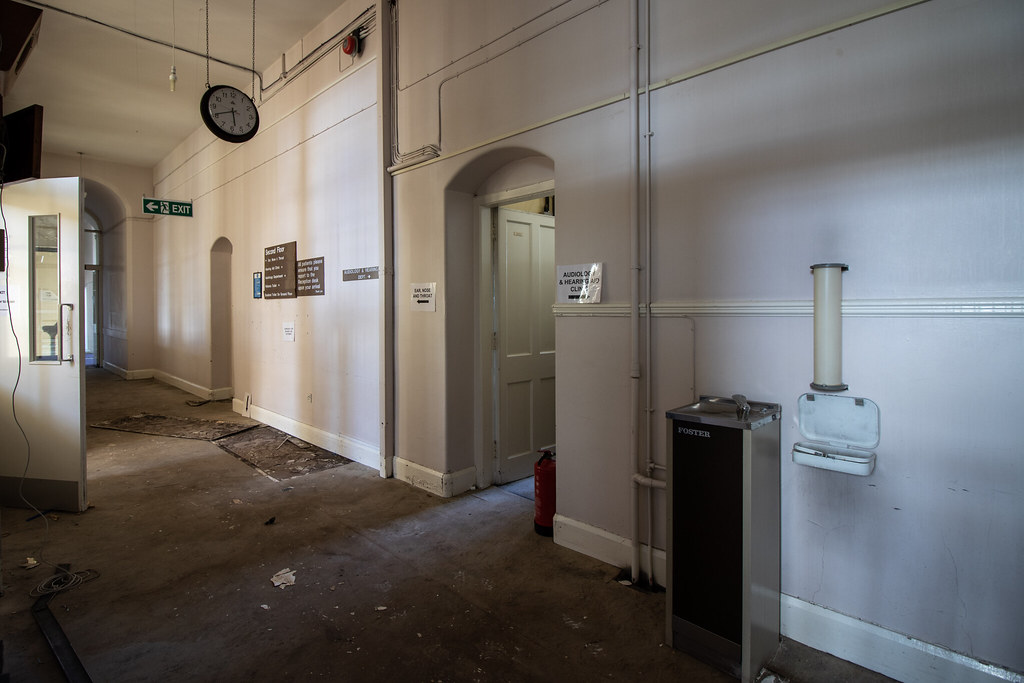 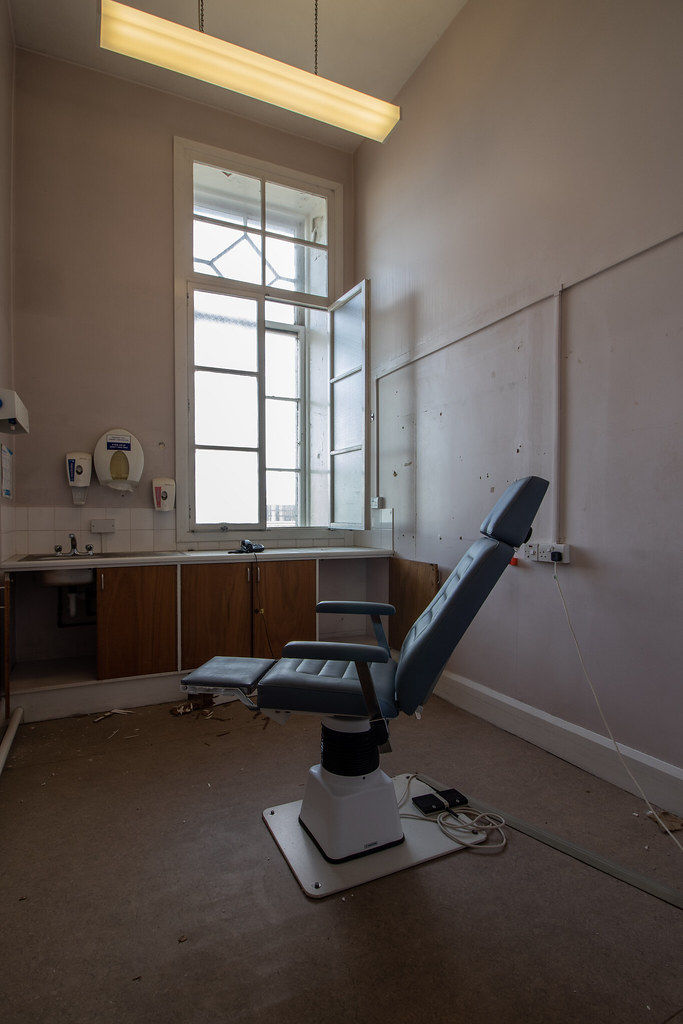 Chairs for hearing tests in the audiology region of this building. 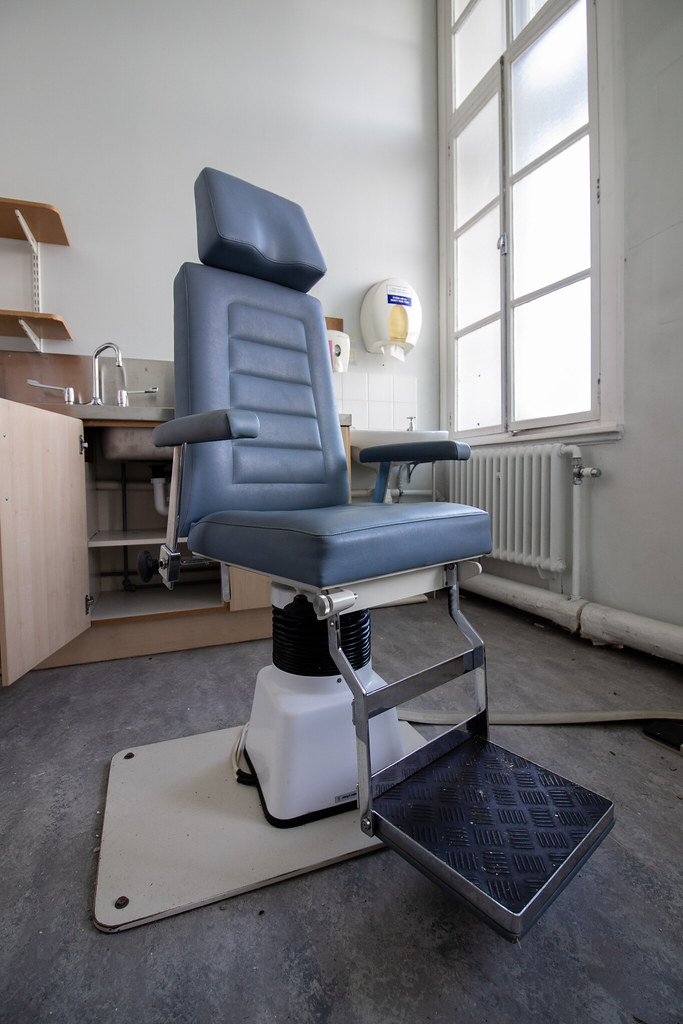 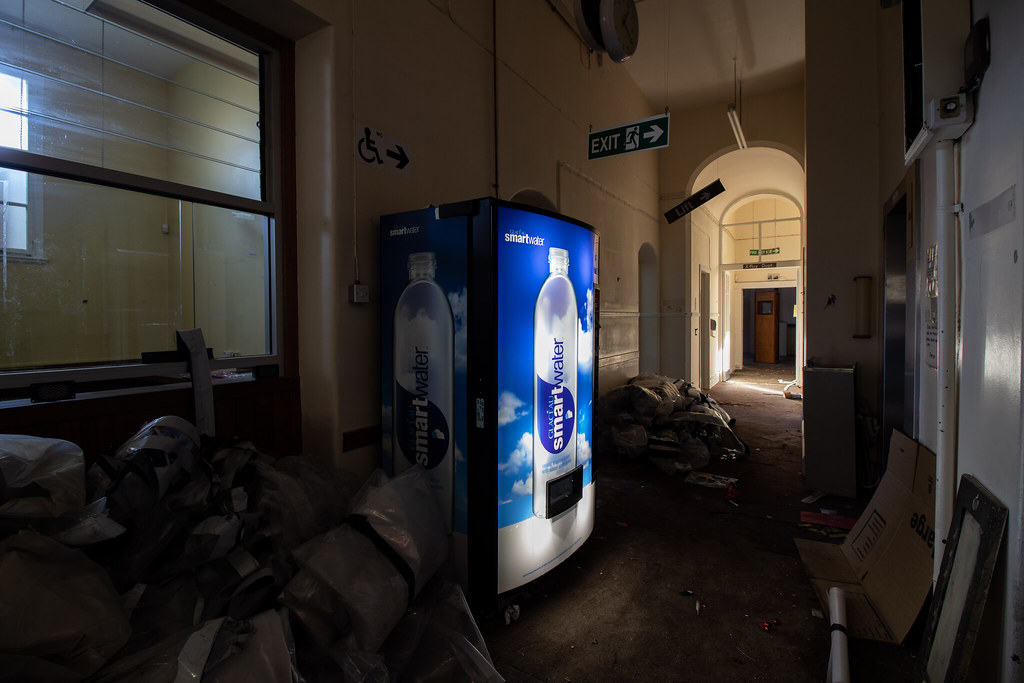 A powered vending machine on the ground floor. 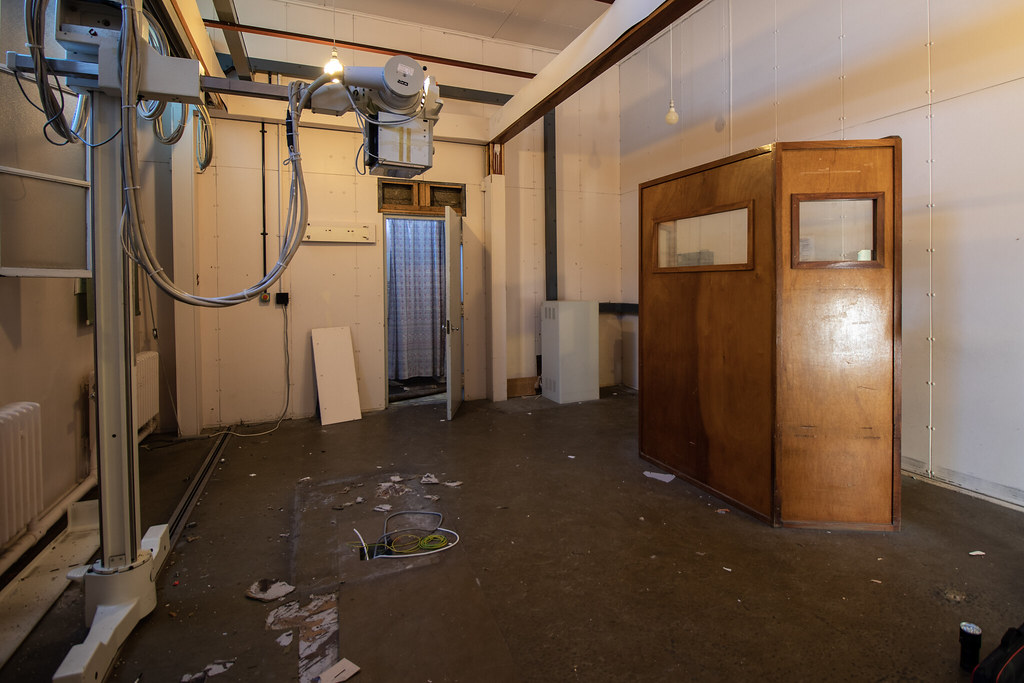 Remains of an X-ray with changing rooms through the door. 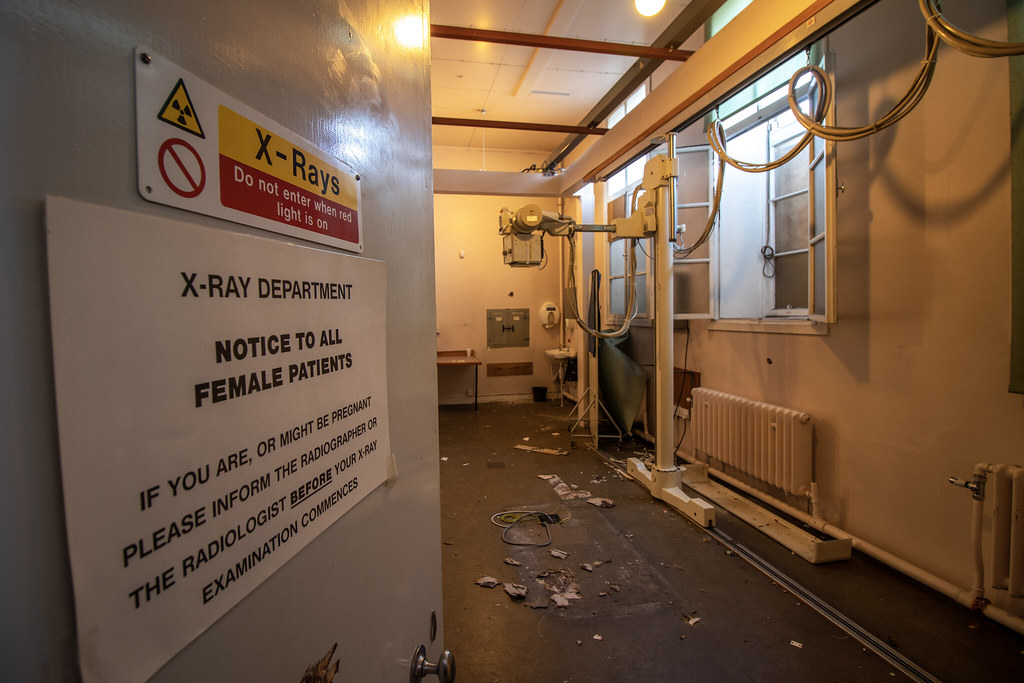 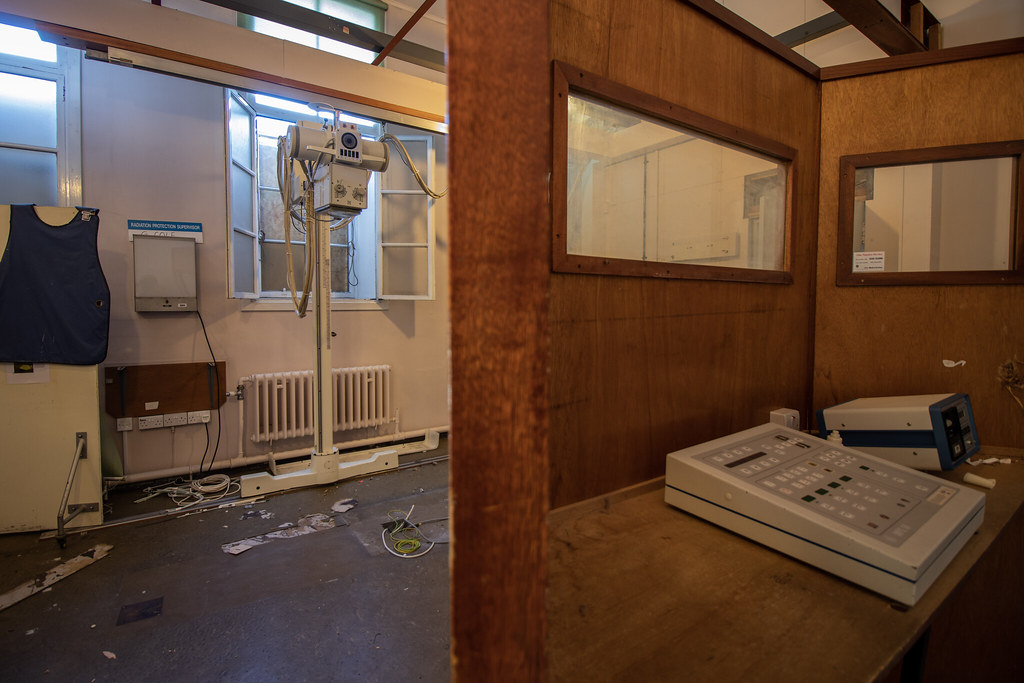 We did return later in the night in the hopes to manage the domed Simpson Pavillion, but they had most definitely switched the PIRs back on then - we probably woke up central Aberdeen!

Here's the link to our documentary styled video filmed at the hospital. We cover the building's past, present and future through cinematics and narration:

The original name for this hospital is "Hospital for Infectious Diseases" as I had Shingles and was a patient there for two weeks back in the late 1970s. As you can see the building has not been altered much and is original when it was built. I'm surprised you managed to get in as its pretty well sealed up. Its going to be turned into apartments and a hotel.