So this report is something a little different from the usual on this site and is hopefully of interest to a few people on here, apologies to the people who might find this a bit boring.
In the River Medway, there are two forts which were completed in the 1872 and sit on isolated islands either side of Pinup Reach, a narrow channel that guards the approach to the Medway Ports of Chatham, Gillingham and Rochester.
In the admiralty chart below Fort Hoo is in the centre, marked as Folly Point, in recognition of the colloquial term given to these forts as Palmerston’s Follies having previously been called Palmerston Forts, after Henry John Temple, 3rd Viscount Palmerston who commissioned them. Fort Darnet can be seen top right the other side of the main channel.

Fort Hoo is built on Hoo Island which is essentially a very flat salt march. The island used to belong to the MOD and was used by them to pump their dredged material ashore from Chatham dockyard. When the Dockyard closed, Medway Port took over the ownership and as recently as 2015, centre of island, which is technically a registered landfill site, was still being used for the dumping all kinds of unwanted material. There are also reports of it having be used to dump unexploded ordnance such as bombs dredged out from the river.
Over the years, it was found that silt was leaking back into the river on the eastern end of the island and the shoreline was rapidly being eroded away. To prevent this, and preserve Hoo Island as a nature reserve for a variety of rare birds, the perimeter of the eastern end of the island was lined with a number of sunken barges, of both concrete and steel construction. Since then, a number of other, more commercial type vessels have been added to these wrecks making in essence a mini ship graveyard.
Like Fort Darnet, Hoo Island is only accessible via boat (kayak in this case) and only when the weather conditions and tide times are right. We set off a couple of hours ahead of a very high tide, and paddled out to Folly Point against the rising tide, but with the wind helping us. About 40 mins later we reached the first wreck, on the south east point of the island, we worked our way north looking into all the wrecks that we could (numbered on the satellite picture above).

Number 1 - Submerged wreck – this wreck is fully submerged at high tide, but at low tide can be seen pretty clearly. At the time we went over, only the very tip of the bow and some form of mast were poking above the water so I could really tell exactly what type of ship it was, but from the google earth and from the distinctive bow cleat sticking above the water, it looked like a WW2 concrete barge.

Number 2 - Steel Grain Barge – This is the largest wreck here at approx. 40m long. A shallow bottomed grain barge typical of the Medway, with the wheelhouse at the back and engine room underneath (see first picture below). This hull had clearly been beached here as a breakwater some time. The sea facing side had taken a battering over the years and as can be seen in the second picture below, most of the steel panels have disappeared with only the struts remaining which have partly sheared off in one place, leaving the hull open. Compared to when I last saw this wreck in November 2020, the side has partially collapsed rapidly, and in the unattached rusty side panel was slowly swaying in the tide.

This meant on our high tide we could actually paddle in and have a closer look. Inside the hull, you could hear the water gurgling into hull as the tide came it, which was a bit eery and quite cool. The first photo below is looking back towards the wheelhouse, inside the hull you can stell see the steel access ladders, electrical cables and cable trays. Even a fairly modern (1970s ish) 480v power connector, still plugged in. Broken shards of glass can still be seen in the wheelhouse windows on the left next to the remains of the smokestack. Turning around and looking the other way (being careful not to snag the inflatable kayak on any multitude of sharp metal) the second picture is looking towards the bow of the ship. It can be seen that the deck struts are in a pretty poor way, the top covering has collapsed, and the sides are falling apart. In another few years, it is likely that only the bow and the stern will be left of the rusty shell.

Number 3 - Concrete barge – This is a photo of just one barge, but there were approximately 15 of these on the east side of Hoo island, and a further 4 at Fort Darnet. There are literally dozens more of these littering the shores of the Thames (especially Rainham marshes) and Medway rivers. Originating in the Second World War, they were constructed from steel mesh reinforced concrete panels bolted and cemented together in order to conserve the use of steel for the war effort, with over 470 being constructed by a building company (rather than shipbuilders) in Barrow-in-Furness. This type of barge was used in the Normandy invasion of June 1944 to transport fuel to other ships engaged in the invasion and may have formed parts of the Mulberry harbours and pontoon bridges that helped move men and equipment to the shore. They were cheap to make and solid as anything, which is why so many have been used as breakwaters or in this case as a reinforced shoreline. Given the very minimalist steel content and low cement content (to reduce costs up to 40% of the cement was replaced with PFA, or Pulverised Fuel Ash which is a by-product of coal burning power stations) these are not as prone to salt ingress, concrete spalling and therefore disintegration as other steel reinforced concrete structures in marine environments such as bridges (a process which was not fully understood until the late 1980s).

Number 4 – Wooden sailing barge – There are a number of older, wooden hulled vessels is various states of disrepair here. The first we came across, called Moonlight something (hard to tell as the bow was missing a plank here). It can be seen in the two pictures below that this was likely some form of cargo carrying sailing vessel, the wooden bracing and metal mast ring could still be seen attached to the deck and the cavernous opening of the hold was still relatively visible.

Number 5 – Fishing Trawler 1 – This is a wooden hulled drifter with steel banding on the bow, used for north sea fishing, likely diesel powered from around 1920s/1930s judging by the style and construction (although I am no expert). Just inside the bow, a shower and toilet set up can be seen (with chequered flooring) and the overhanging booms for lifting the fishing nets are still attached with the winch still visible in the top right of the left hand picture below. In the middle of the ship, the corroded remains of the stack can just be seen popping through the hull where the deck has collapsed as well as the fishing hold and the collapsed mid deck. In the right hand picture below, the hull can be seen, alongside a number of other boats. 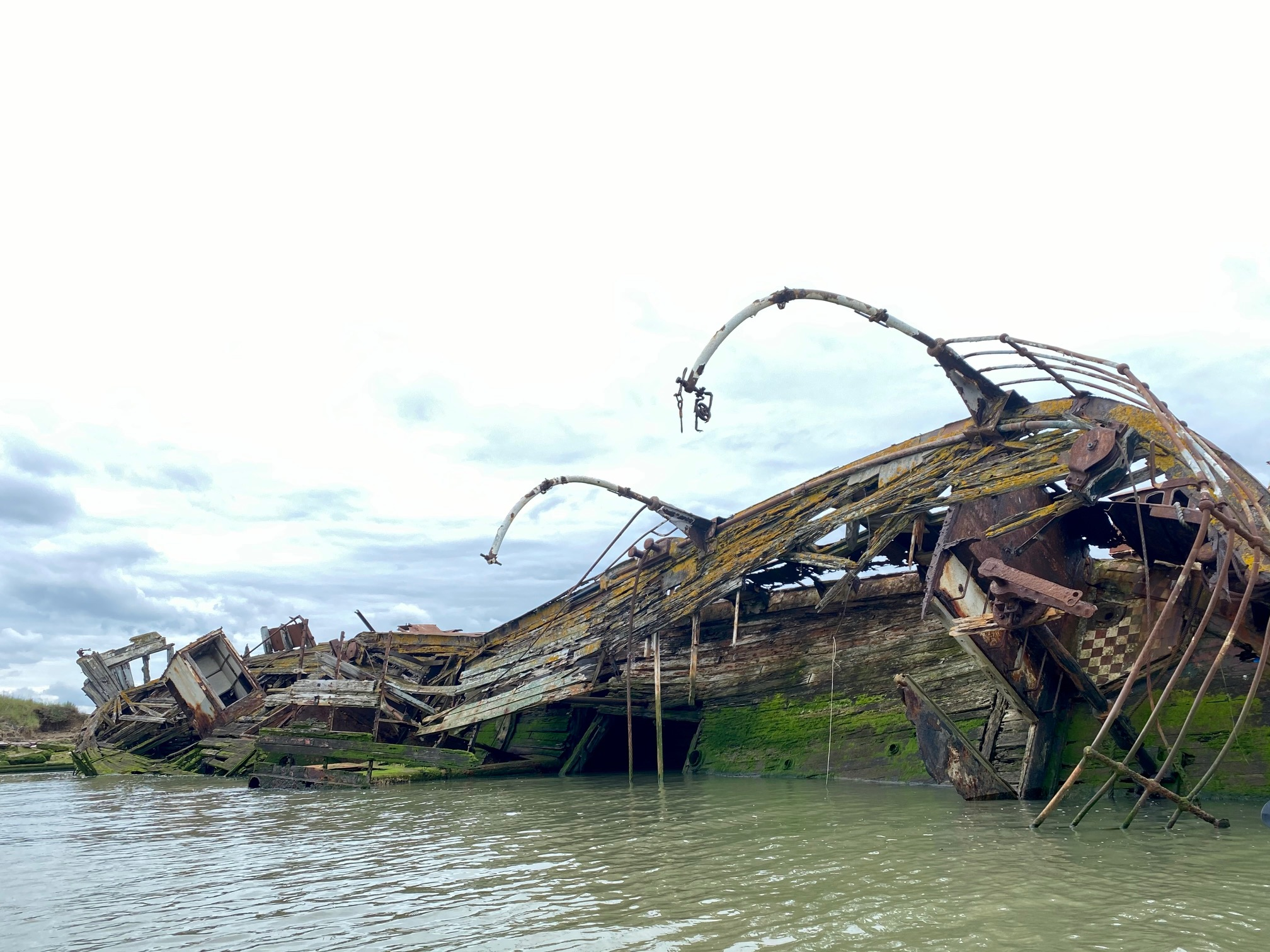 Number 6- Fishing Trawler 2 – This boat (the blue hull in the picture above) is a slightly more modern (1960s in my guess) diesel powered wooden hulled trawler. A steel reinforced bow stem can seen in the left hand picture below with the rest of the hull made from wood and in right hand picture, the stern can be seen, which has been completely battered open by he see. The wheelhouse and cabin still largely intact (comparatively) with glass still in the windows, radio mast and parts of the jib arms for lifting the nets still attached.

The photo left below shows the collapsed deck and the front of the wheelhouse, complete with cracked glass windows, and the photo on the right shows the precarious entry into the hull underneath the wheelhouse, towards where the diesel engine would have been (avoiding the plethora of sharp pointy nails!)

As soon as we entered the hull, we could see the rusting diesel tack still in place (right hand side of the left photo) as well as a number of charred deck beams, indicating at some point this wreck has been on fire. Squeezing past the tank, was a bit tight but it allowed for a closer look at some of the charred wood and rusting steel. In the right photo below, lagged pipes coming out if the pipe and more charred desk boards can be seen.

Inside the hull was a little cramped, and with a fast rising tide we didn’t hang around for long but it was interesting to see more evidence of the charred deck boards running to the stern of the ship as well as lots of electrical cables. I noticed a mixture of two and three core wires indicating that the vessel was older than 1977 (when 3-core was adopted) but had been retrofitted some point after that. After a few minutes in the hull we turned around and came out as the tide was predicted to keep on rising for another 30 mins and we had no intention of being trapped in there. The photo on the right shows how tight the inside of the hull was for a kayak.

Number 7 – Small fishing / lobster boat – This fairly modern white ship, called the Evie Marie, looks very out of place compared to the other ships. She has been driven high up onto the back of a smaller more submerged hull, utterly crushing its superstructure but looks in (comparatively) good condition, with no significant holes in the hull that I could see. She almost looks like she could be floated off and used with a lot of TLC.

After playing around with the sunken ships for a bit, we landed at Fort Hoo for a picnic and a look around, and then headed back for what felt like a long paddle against the ebbing tide and the wind before packing up, drying off and heading home. Was a fun trip seeing something a little different from the usual so hopefully this is of interest to people!

Thats bloody brilliant is that.

Nothing boring and nothing to apologise for.

Could you not have waited for the tide to rise high enough to float out through the hole in the collapsed deck of the fishing trawler? Just asking!
B

Hayman said:
Could you not have waited for the tide to rise high enough to float out through the hole in the collapsed deck of the fishing trawler? Just asking!
Click to expand...

Possibly, it was a very tight squeeze with the low beams. Would definitly have been able to get out of the kayak and climb out, then pull the kayak through after so there was never any danger, just a strong risk of getting wet!
A

blackie said:
Possibly, it was a very tight squeeze with the low beams. Would definitly have been able to get out of the kayak and climb out, then pull the kayak through after so there was never any danger, just a strong risk of getting wet!
Click to expand...

Thanks for your reply. I thought of getting out of the kayak and pulling it through, but I wondered about the risk of any sharp edges damaging it.
K

I thought this was different, and was definitely my favourite report for this year. Well done