Kaputnik spotted the disused Thorton Chocolate Factory in Belper, after a brief conflab with myself and The_Revolution a visit was planned.

Norman Thornton was born on 6 November, 1896 in Sheffield, the eldest son of Joseph William Thornton (1870–1919), a Commercial Traveller, and his wife, Kate Elizabeth, née Hinsby (b. 1873). He left Sheffield Grammar School in 1911 when his father opened a sweet shop at 159 Norfolk Street, Sheffield, leaving Norman, then aged fourteen, to run it, while he continued to work as a travelling salesman for the Don Confectionery Company. This shop brought in £20 a week, enabling him to open a second shop in 1913, on The Moor, and the family moved to live over the shop, hand-rolling sweets, boiling mint rock over a gas fire in the basement, and hand-dipping violet creams, although most of the confectionery sold in the early days was bought in.

Norman took over the business on his father's death in 1919, and opened two more sweet shops - Chocolate Kabins - and took over a fruit business. In 1921 he was joined by his brother Stanley, forming a private limited company, J. W. Thornton Ltd, with Norman as Chairman.

He married Muriel, daughter of Joseph Illingworth, engraver of silver and Sheffield plate, in 1928: they had three sons and one daughter.

Norman concentrated on the retailing side of the business, opening the first Thorntons shop outside Sheffield, in 1928, at Rotherham and increasing the number of shops to thirty-five by 1939. As the business grew, it was no longer possible to make all the confectionery, including the hand-made luxury chocolates, on the premises, and in 1927 the brothers moved production to a small factory in the Hillsborough area of Sheffield. It was at this time that Norman Thornton had the idea of icing customers' names on to Easter eggs, an idea which proved very successful. They moved to a bigger plant in 1931, and again in 1935, to a purpose-built factory in the Millhouses area of Sheffield, which was to be their headquarters until the 1980s.

Expansion stopped with the outbreak of the Second World War, and although the Thorntons factory was not bombed, toffee production was transferred to a small factory in Bury, and continued throughout the war. Refused permission to extend the factory after the war, because of the shortage of building materials, Thorntons bought Castle Factory, near Belper, in Derbyshire, an old mill which had been used by Rolls Royce to store aircraft engines during the war, and before that had been a music-hall, and in 1947 began to manufacture boiled sweets there. With the end of sweet rationing in 1952, the firm began to expand again: in 1954 the Swiss confiseur Walter Willen joined the company to develop Swiss chocolates known as the Continental range, and the sons of Norman and Stanley Thornton joined the business during the 1950s. Following rapid expansion in the 1960s, with Thorntons winning many international awards, Norman Thornton retired in 1971. He died on 3 November 1984 at his home in Sheffield. His funeral was held on 9 November at Eccleshall Church, Sheffield.

Joseph Stanley Thornton (1903-1992), the second son of Joseph William Thornton, was born on 5 September 1903 in Sheffield, and educated at Sheffield Grammar School. He won a scholarship to Sheffield University, but decided to work in the family business during the day, and study food technology, in particular confectionery making, in the evenings. While Norman Thornton ran the shops, Stanley concentrated on the production side of the business. In 1925, after a year of experimenting on his kitchen stove with different combinations of butter, milk, and sugar, he created the recipe for Thorntons' Special Toffee, which for a long time was their most famous and successful product. He married Jeanetta (d. 1982), daughter of George Jamieson, boot and shoe retailer, in 1932: they had six children, including one son, Michael, who joined the company in 1956 and later became deputy chairman.

After working closely with Norman Thornton from the beginning, Stanley Thornton became chairman of the company in 1971, and company president in 1982. Despite problems in the chocolate confectionery industry in the 1970s, with wild swings in the price of cocoa beans, Thorntons continued to open new shops, including two in Scotland, and to develop new lines - ice cream was introduced in 1983. A large new plant, Thornton Park, on a 65 acre site at Swanwick, near Alfreton, in Derbyshire, was opened in 1985, to enable the business, for so long concentrated in the north, to expand into the south of England. An attempt to open a chain of shops in the United States in the 1980s, starting in 1982 with two shops in Chicago, was unsuccessful, but in France the company owned over fifty shops, and there was a large international mail order service. By 1988 Thorntons had over 1500 employees in the United Kingdom, over 200 shops, and 92 franchises, and increasing sales to corporate customers: 8½ per cent of sales in 1988 were to Marks and Spencer. The annual turnover in 1988 was £46 million. They no longer made the raw chocolate themselves—this was made to Thorntons' specifications by Cadburys in Birmingham, and by a Belgian supplier.

In 1988, when the company was floated on the stock exchange, valued at £78.6 million, the shares were eight times oversubscribed. 73 per cent of the shares were retained by members of the family, to avoid take-over, as had happened to Rowntree Mackintosh, taken over by Nestlé in 1988. Stanley Thornton became life president of the new company, Thorntons plc. After seventy-seven years, the link with Sheffield was broken, when the Millhouses factory was closed, concentrating chocolate production at Thornton Park, and toffee and ice cream at Belper. Thorntons remained a family business. Its share of the chocolate and confectionery markets was tiny compared with that of firms such as Cadburys and Frys - even in the Christmas chocolate sector, Thorntons had only 6 per cent of the market in 1988, but it had built up a reputation for high-quality, luxury chocolates, sweets, and toffee, made to traditional recipes. Thorntons was unusual in operating as both manufacturer and retailer, selling as well as making its own confectionery.

By the time of Stanley Thornton's death, on 27 February 1992, at the Derbyshire Royal Infirmary, the company was embarking on a new expansion drive.

Stanley Thornton's ashes were interred at Winster church, Derbyshire, on 5 March, after a funeral in Derby Cathedral.

Have you been good boys and girls

"Dip me in chocolate and throw me to the lesbians"

The lower floor of the main building seems to be in use by the nearby haulage company. Lots of odds and ends in here and many, many tyres. 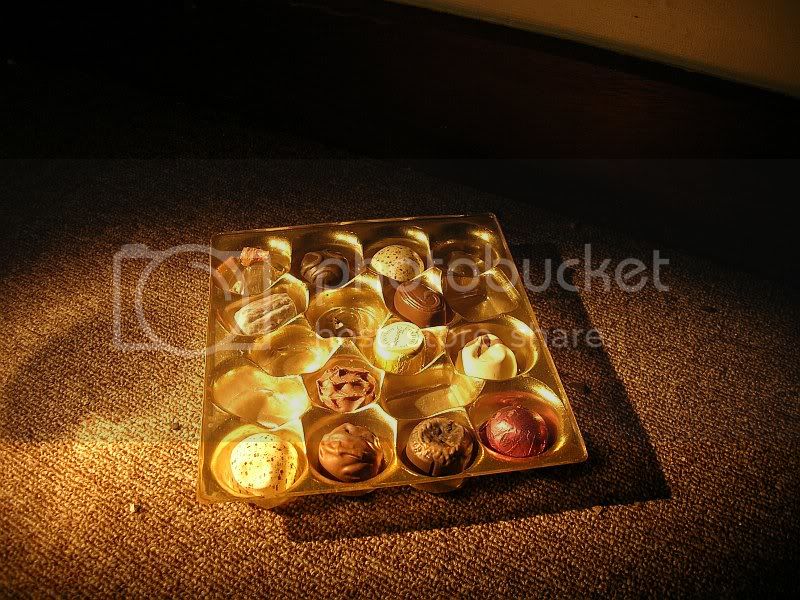 Are you wearing your hairnet correctly? 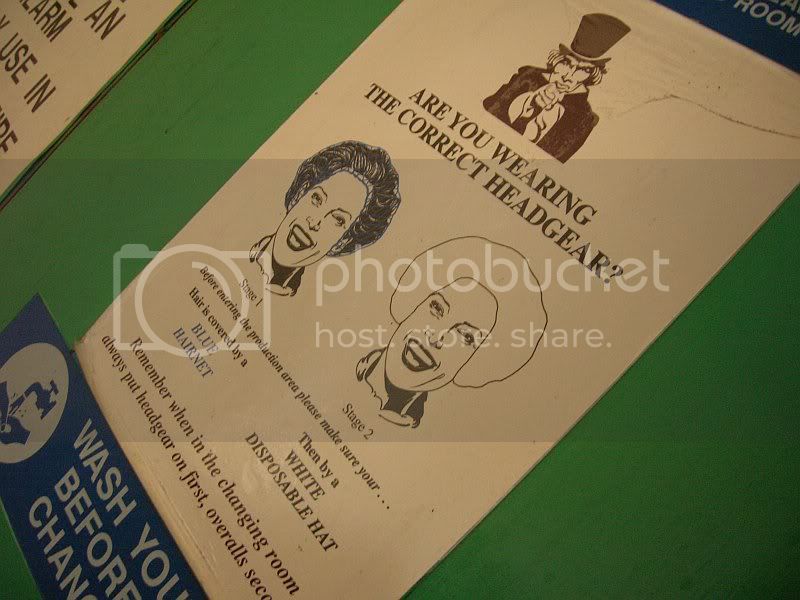 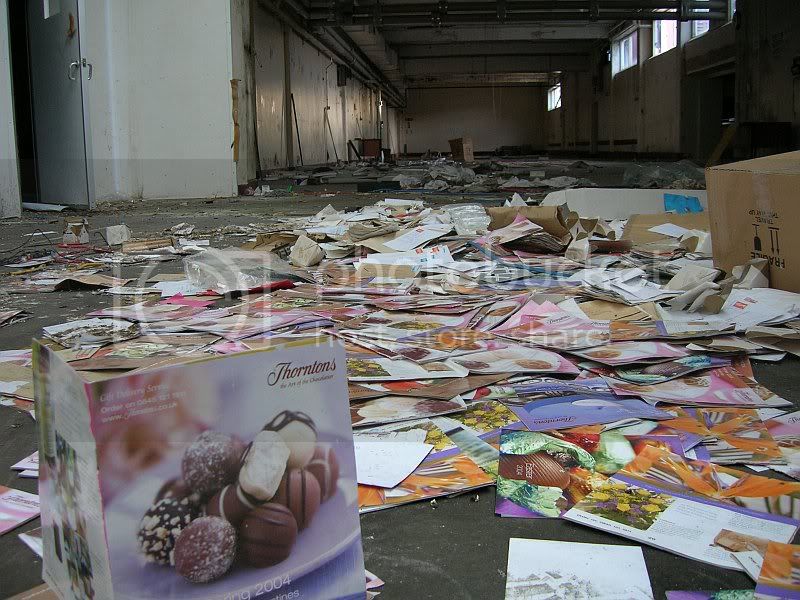 a notice relating to the move to Somercotes, Thorntons park factory..
some one i work with now, was an employee at the Belper site where these pictures were taken, in the 1980's, and said that the move was phased, department by department, she was re-located to the new factory very early on, in 1985, and said it lost the friendly atmosphere, and pleasant location, likening working at the new site, with no ground level windows, to being a battery chicken.... 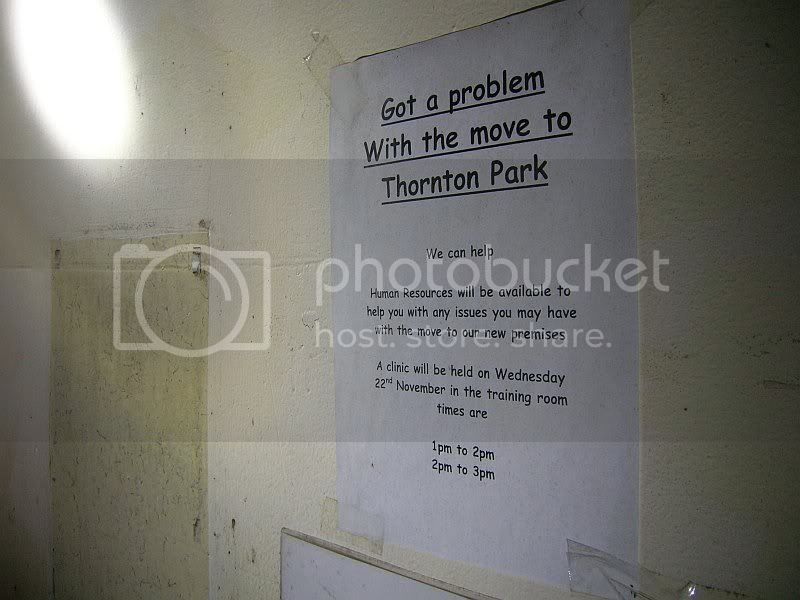 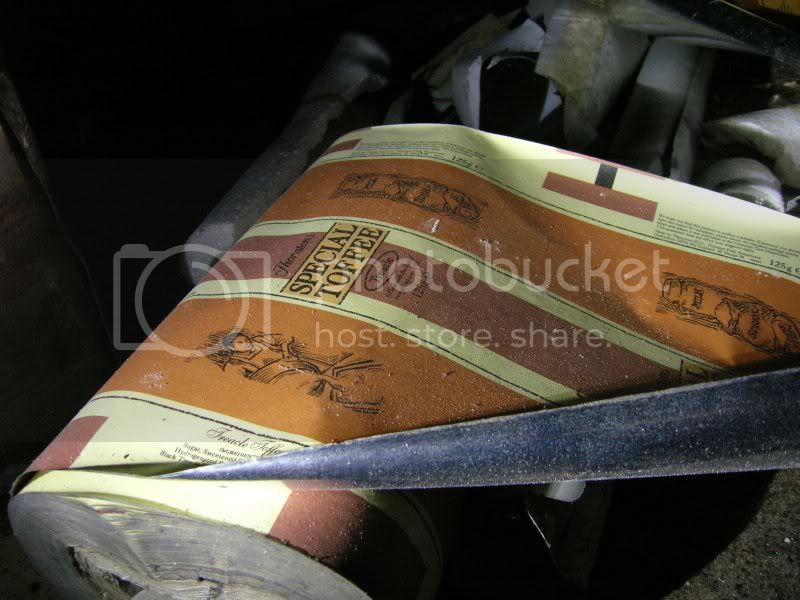 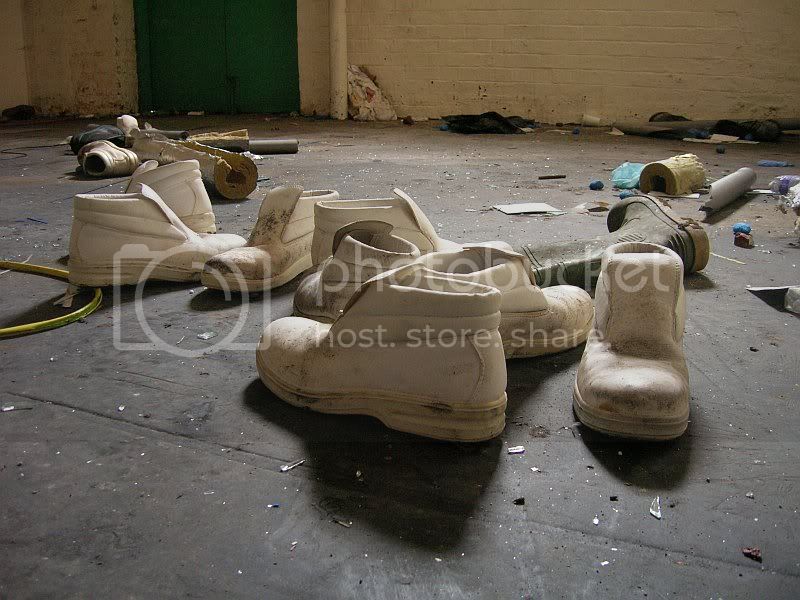 First time I have ever seen this place and its not how i imagined it at all.Its more like Heath Robinsons laboratory/workshop than an international confectioners,hope the new place is better

However as always you guys have done it proud and covered it very well,great history and pictures

Unfortunately the photos can't show you the smell. The mix of a rum type smell and damp has put me off rum truffles for life

most of the former production rooms were huge, but now emptied of all the machinery, johno23, and not all that interesting to get pics of, must have been interesting to see it in full flow in it's heyday.

The_Revolution said:
Unfortunately the photos can't show you the smell. The mix of a rum type smell and damp has put me off rum truffles for life
Click to expand...

i remember driving past here quite often on the way to friends in Belper years ago, when the factory was up and running, and the smell back then was fantastic! i'm sure they wafted it out into the streets like subliminal messaging to make people buy chocolate.

why is it there is always loads of old tyres in old buildings? busm has 1000,s scattered around the site

why is it there is always loads of old tyres in old buildings? busm has 1000,s scattered around the site
Click to expand...

Because tyres cost a huge amount of money to dispose of, so they tend to get fly tipped instead.

Excellent work CM and TR. Me and TnM had a drive past here a few weeks ago, but sadly had run out of time to do an explore. Excellent work on the history of the company and the site. Love seeing the chocolate promo leaflets, and the chocolates, such a shame they're display ones lol. Like the hair net poster.

Got some lovely pics.

Great pics, I used to work in that place and believe me it is in better condition now than it ever was. Had some great times at that place. I was part of the last dept to move from belper to the new factory....and as mentioned the friendly atmosphere died when they left that site.

Nice one!! Can't beleve there were no umper lumpers lurking around though, or was there:icon_evil

damn this thred.....now i want chocolate
8

Was there any sign of security when you went? The yard was full of lorries and trailers and there was also a nice looking, red mitsubishi gto parked up the side aswell.

Was there any sign of security when you went? The yard was full of lorries and trailers and there was also a nice looking, red mitsubishi gto parked up the side aswell.
Click to expand...

The yard is used by a haulage company and so the site is sort of live.

great piccys well done guys.... id luv to try it myself some time