Kingsdown quarry aka. Swan Mine - January 2016

Kingsdown quarry also known as Swan Mine was a Bath stone quarry that began operation by the late 18th century with the exact date being unknown, in 1896 records show 12 people working there much less than the nearby Corsham quarry.

The quarry itself is directly opposite Swan Pub which used to be the quarry masters house. The mine was serviced by horse and cart and never modernised before its closure in 1932.

At least 2 miners Levi Wilcox and "Helps" died while working in the mine, killed by collapses as they worked.

Visited with SlimJim and PricklyBuzz the day after the dp meet.

Swan Mine is somewhat unique in that it is open access,and not gated off in any way the access sits by the road, which makes it the perfect hangover explore. Despite being in plain view the location is obviously respected by its many visitors with stones placed around the hoof prints left by the horse or pony driven wagons all those years ago. I would urge anyone in the area to give it a visit, the pub opposite that we didn't have time to visit due to me having to catch a train was the old quarry masters house and apparently contains information about the mine as well.

Moving around this mine was great fun with the occasional small hole to slide through or pile of rubble to overcome.

I didn't capture as much as I wanted to a post-able standard however I'm sure PricklyBuzz and SlimJim have my back with their gopro videos and shots.

A split in the road, these roads stretched the length of the main mine,

Artefacts from the mine, 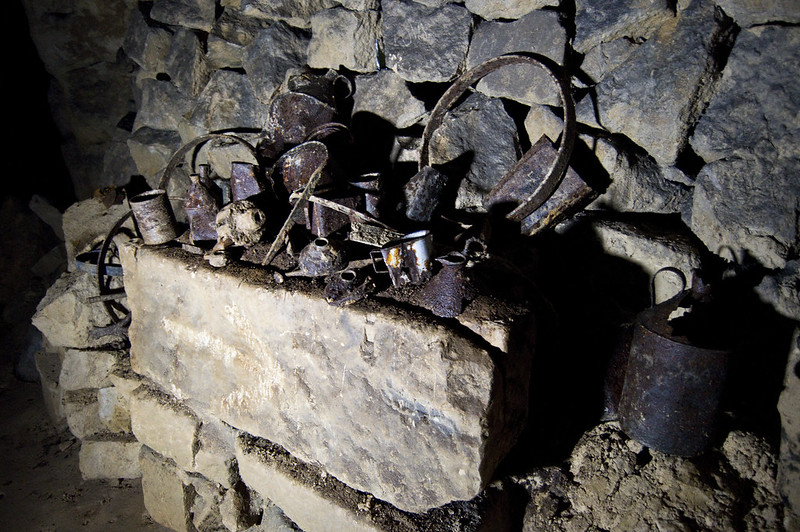 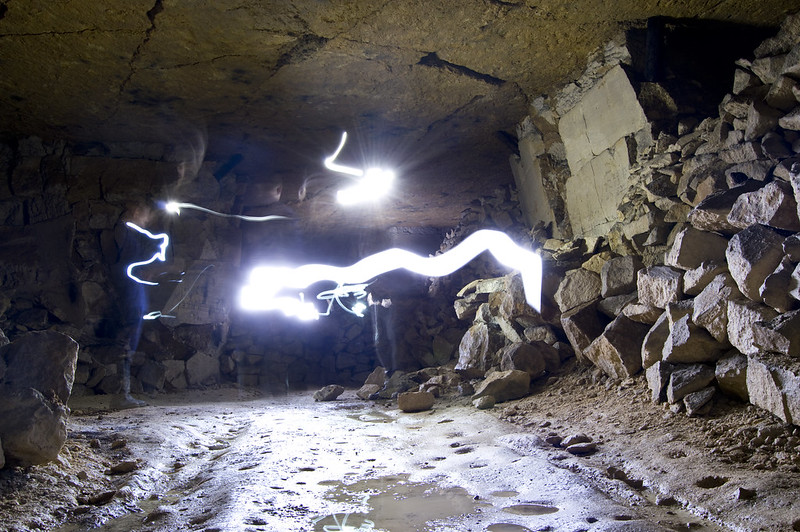 A trough for the work horses/ponys, 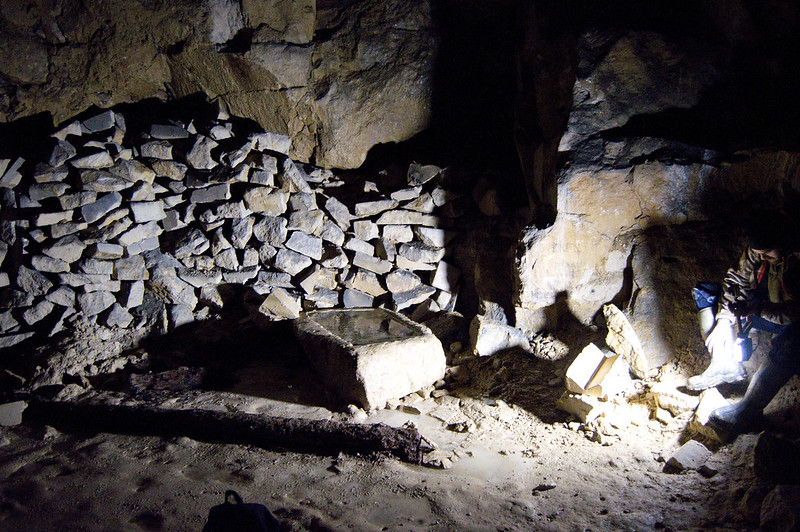 Dates and numbers could be seen scrawled on the wall by the workers, 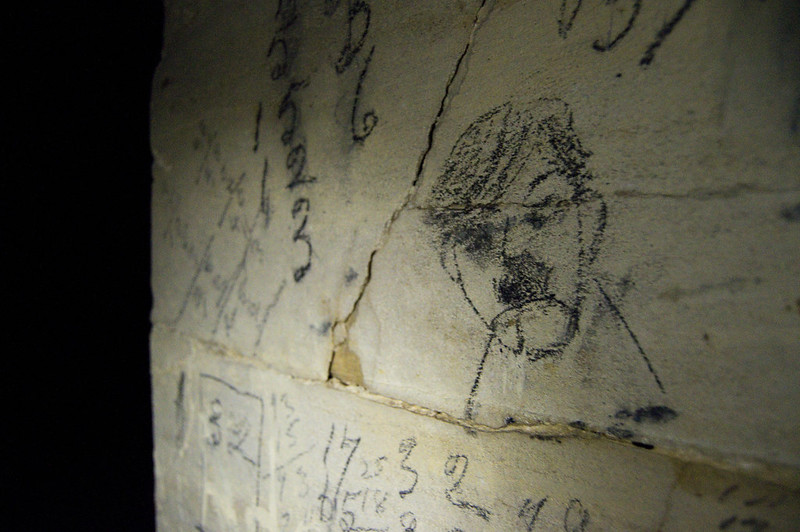 This unlucky crane was crushed by a giant slab that detached itself from the celling. In the pub meet fluffy said something along the lines of feeling lucky after you get out of the mine in one piece with the rocks from various roof collapses occasionally blocking the path. However unlikely it may have been I couldn't shake the slight feeling of unease present due to be under several tonnes of rock.

This crane was however intact, defiantly the highlight of the visit, 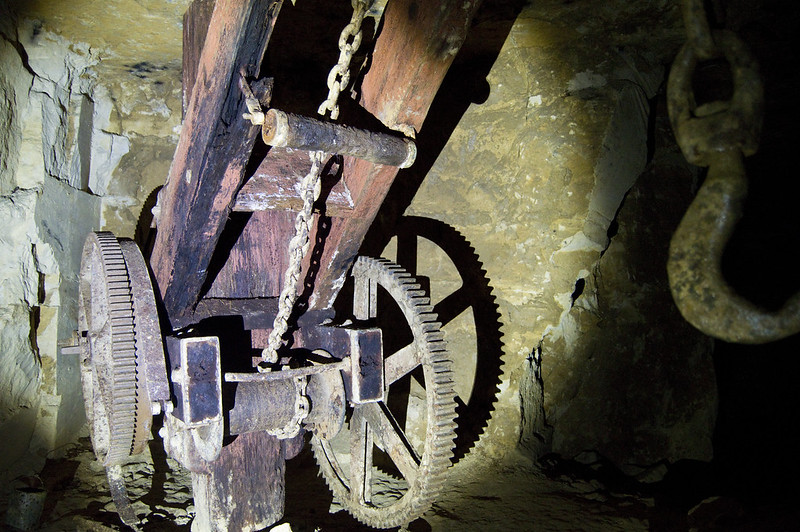 PricklyBuzz putting his mask on,

This floats my boat.

I'm a bit short on shots too...creative energy was sapped by the fact my gizzards were shaken up and my legs were so weak! I wasn't so worried about collapses, as long as they'd be big and squash me quick! Feel sorry for the poor blokes that got killed though. Took some serious Lumens to light this place!

Another entrance we found.

Spot where we sat to re-fuel on IRN BRU.

Nice work boys! Beginning of the UAC 2016 tour!
I was feeling 'fatigued' to say the least after the night before.

Nice. never done a mine like this need to get myself down one

I'm so glad you went there, as it means I don't have to. You have a lot more guts than me!
F

Excellent post boys !! Crackin shot of the graffiti Konrad (never seen that before !)Like i said on Saturday this place scares the shit out of me, it just seems so fragile in places. The way youve gotta look at it is that its been there for the best part of two hundred years so the chances of being in there when theres a major fall is pretty slim. And like Jim says the thought of being squidged outright isnt as bad as the thought of being stuck in there !! The pub outside is a good'un and if i remember correctly has many pics of a lot of bath stone quarries on the walls !!
PS i'd forgotten about that bloody crane shot !! Now that ive got a wide angle i'll have to go back !!
Keep it up boys this is DP stuff at its best !!
PPS Great to meet you all - im sure we'll get some splores in together pretty soon !!

Good to see the crane is still standing,thre was a bit of concern about 20 years ago that it was about ready to fall over.

Nice one lads, beautifully lit too!
Excellent photos, need to get underground again!

Prickly_buzz said:
Nice work boys! Beginning of the UAC 2016 tour!
I was feeling 'fatigued' to say the least after the night before.
Click to expand...

Big it up! Here's to the next road trip, mate


Mr beady said:
Nice. never done a mine like this need to get myself down one
Click to expand...

Go for it, it's fantastic!


urban-dorset said:
I'm so glad you went there, as it means I don't have to. You have a lot more guts than me!
Click to expand...

It's surprisingly more comfortable than you think You appreciate the ambient temperature inside when it's blowing a gale and raining outside too!


oldscrote said:
Good to see the crane is still standing,thre was a bit of concern about 20 years ago that it was about ready to fall over.
Click to expand...

Still going strong by the look of it. There was a sign saying the pivot was weak and not to attempt to rotate it though.

Thanks, Mr.X Underground is where it's at!
F

Awesome video and images,really enjoyed this report.Thanks for sharing gentleman.

Excellent report thanks I have been planning to do this one when I completed box so hopefully i will get to do this soon now. I can relate to the sinking feeling of roof collapse to. : ) nice shots
You must log in or register to reply here.

Northamptonshire's heritage of mining and quarries part one