Once upon a time, when travel was cheap and on a whim I found a photo, I asked a question and the response was snakes, sharks and laserbeams - don't !

I asked some else, with a response of snakes, sharks and laserbeams had been removed and look for a bus stop in Latvia with a concrete road at the side (he was honesty being helpful - in fact he eventually came along for the ride).

So Googlemaps and the country of Latvia in front of me it took me days to find (mostly due to customers repeatedly wanting things doing).

And so it came to pass if your friends are as stupid as you or simply gullible you can drive down the country P116 road in Latvia you come to a bus stop next to a concrete side road into the trees.

Tin Dog, Tbolt, Darmon Ritcher and myself pulled up in the car only to be greeted by a number of the locals.

One of the locals, a Bill Clinton like chap, stepped forward to our car and began to question us in Latvian. "English" I piped up and a comical exercise in why perhaps it is a good idea to own a phrase book occurred. I decided to act dumb and made flappy bird like wing movements with my hands "we English bird watchers", a long pause and then Bill Clinton's reply was something like "no birds, abandoned Russian military base". We thought he was kind of beckoning us in to take a look - so far so good, we drove on down the concrete road.

We parked up a little hesitant, as I previously said Skrunda had a checkered history of access with stories of guard dogs and heavy security. Skrunda had then become a free for all for the locals but then had recently been sold - access today would seem to be wide open, as we had been advised - but little did we know at this point of an article in recent days before in the good old Daily Fail. 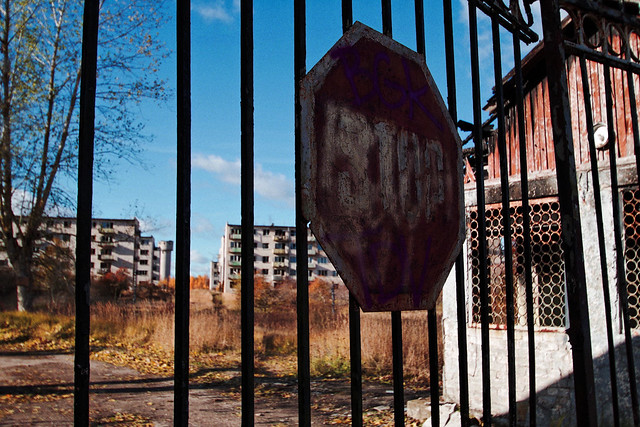 This Russian secret military base was finally abandoned in 1998 and is rather reminiscent of Pripyat without the Ferris wheel and radioactivity. 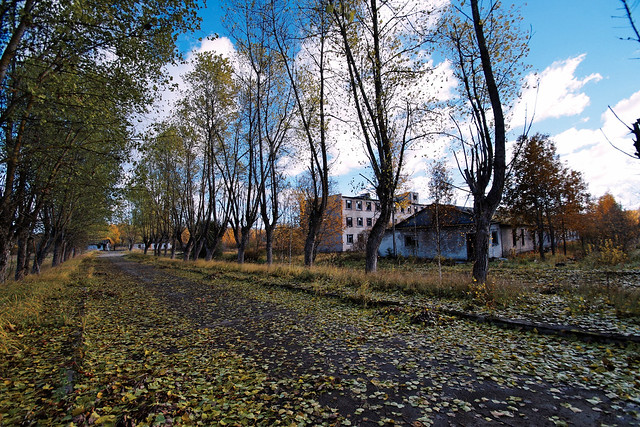 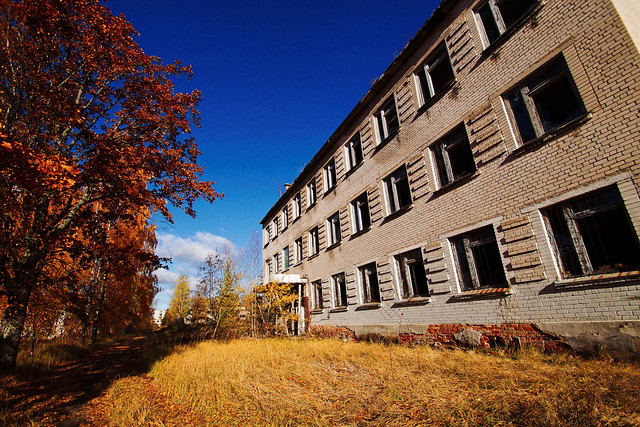 Onto a roof for a view of the area 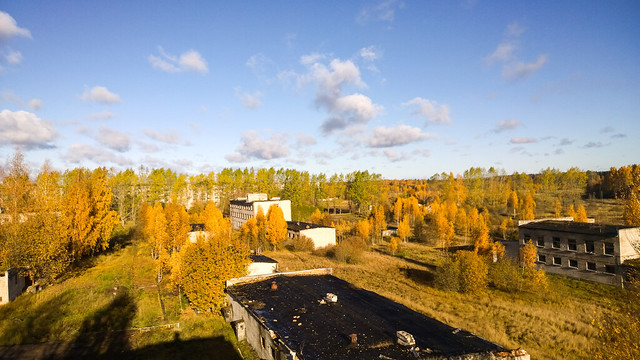 It was about this time we spotted a security van driving through the site, thankfully it finally left but we upped our game, given that we had simply walked in through an open gate we hadn't expected any security van. Had Bill Clinton dude and his merry band of locals set us up for a big fall?? 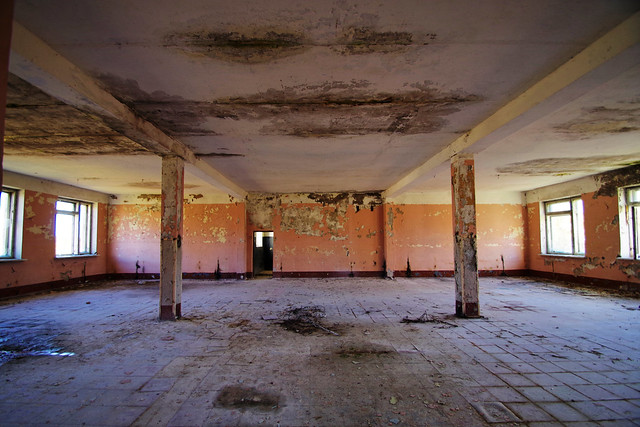 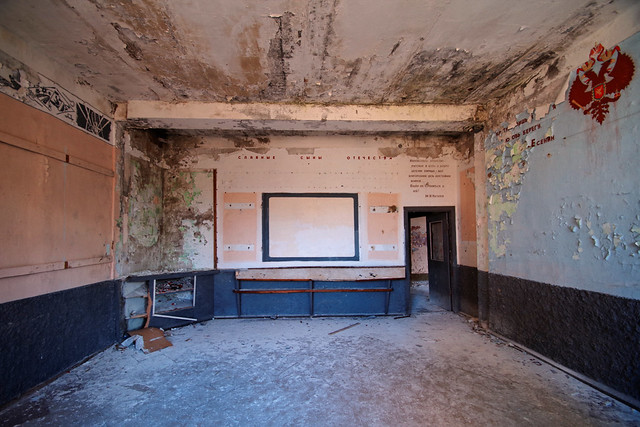 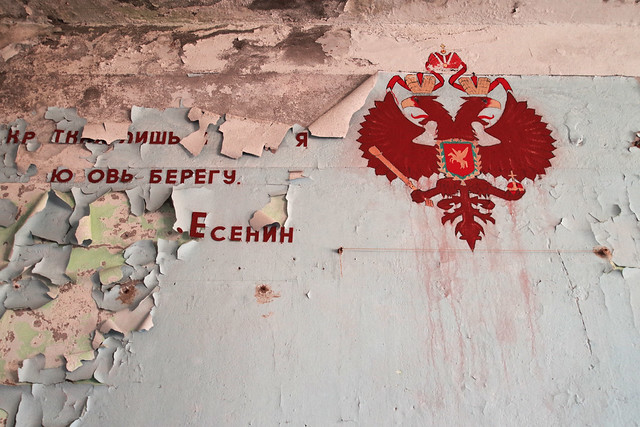 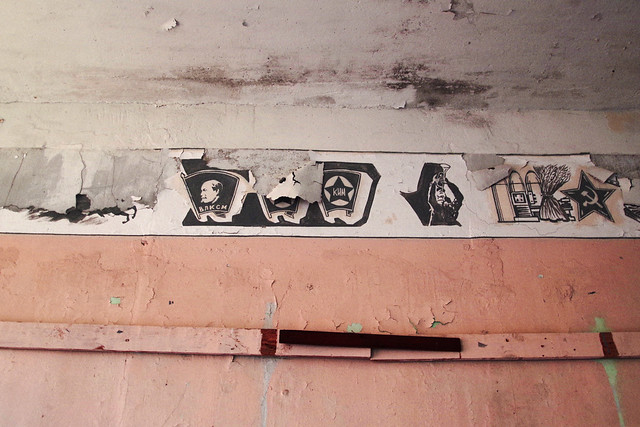 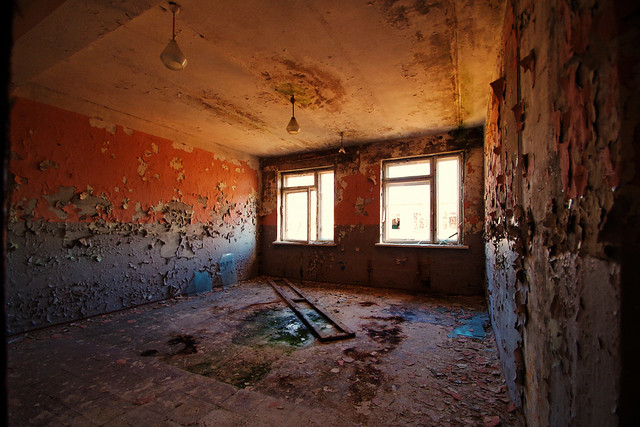 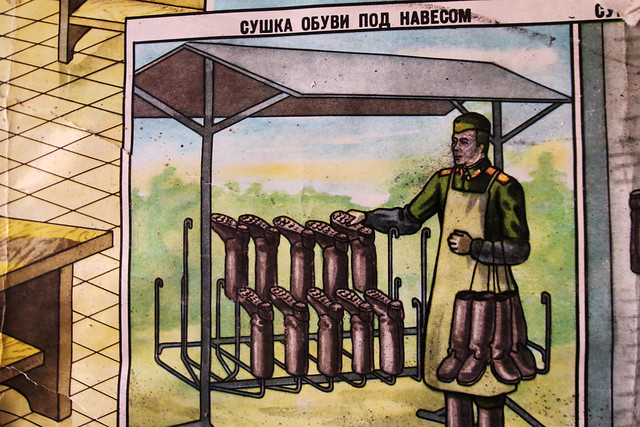 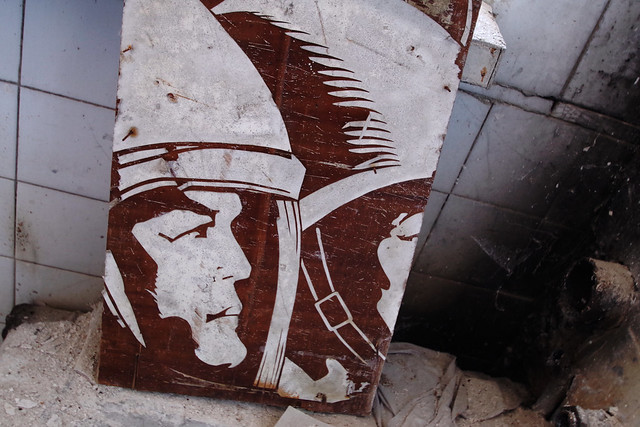 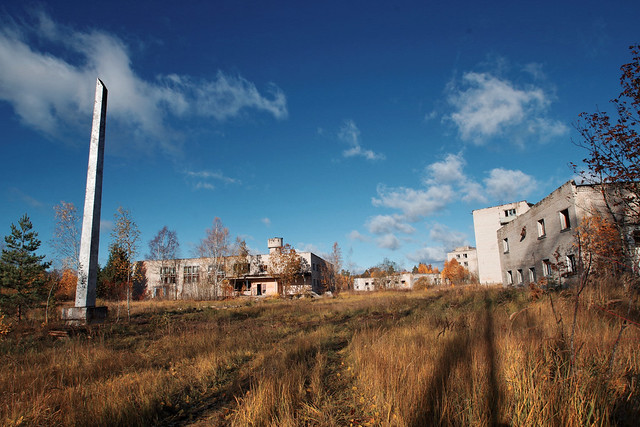 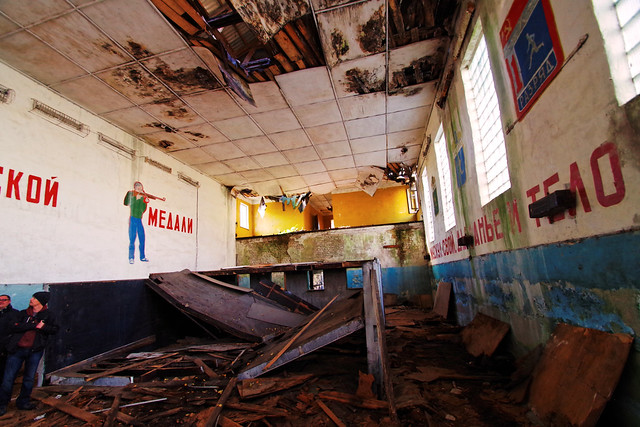 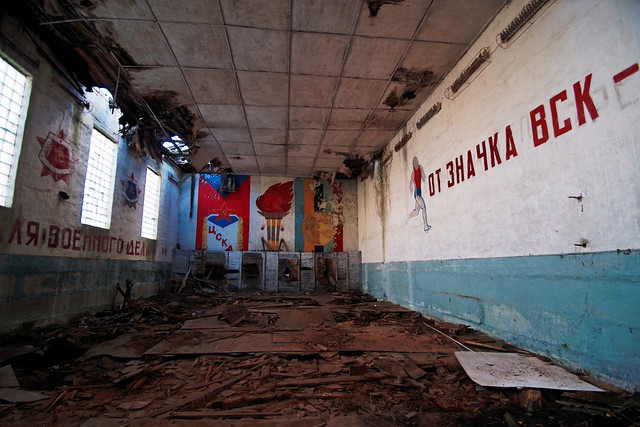 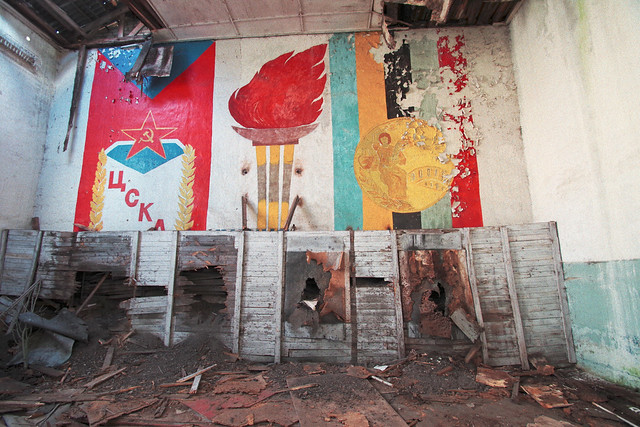 Then it all went a little bit poo, Darmon spotted two chaps in high viz, we scoped our car with our cameras and parked slap bang next to it was a police van !!! Time for our toes to move sharpish - these chaps are mostly armed and like a good large bribe - we didn't know if we should be in this place or not and stupidly we didn't know any of our legal rights - not that this means a great deal when you may be face to face with a couple of bent Police officers with guns.....

Into the cover of trees and into the shadows of buildings we nervously made a rather rapid move towards the far end of the site taking shelter one of the buildings.

Darmon instructed us all to swap the memory cards in our cameras for fresh blank ones, shortly after we took the shots from target 2. 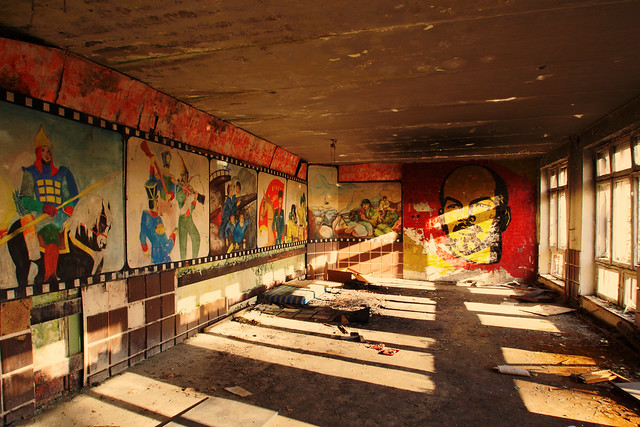 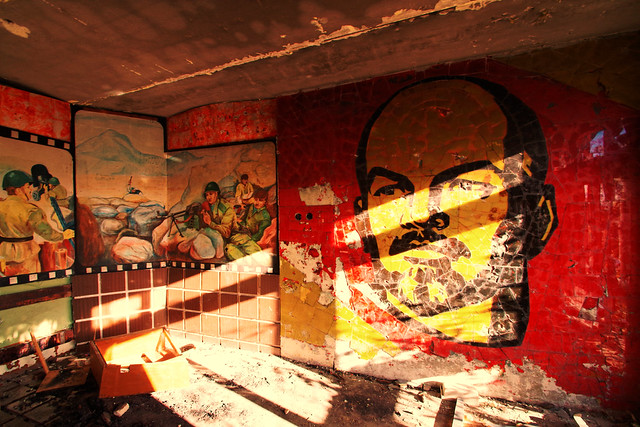 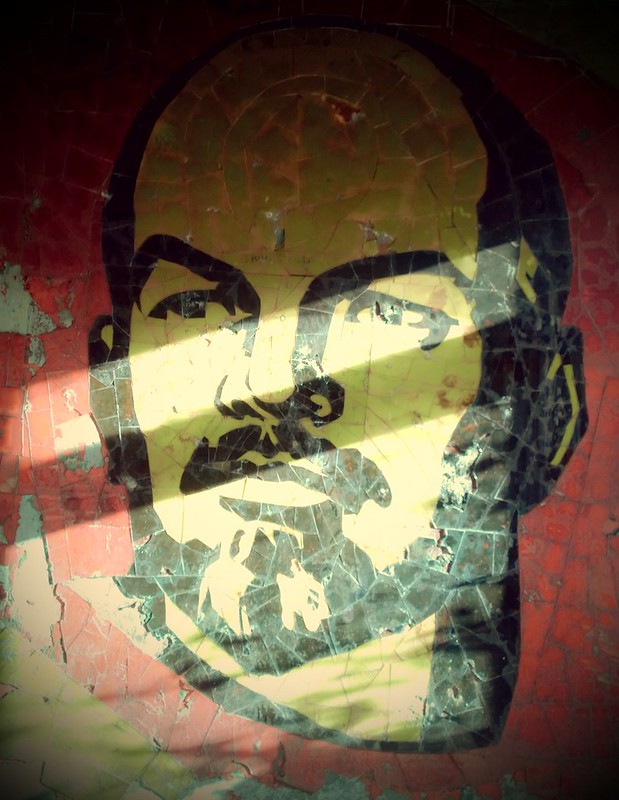 Time to move bloody sharpish once again, we could see the police moving from building to building with their rather worrying guns in hand, we moved to the far end of the site, in a rather feverish few minutes - being stalked by armed police was not part of my holiday pitch to Tbolt and Tin Dog. Mrs Tbolt and Mrs Tin Dog would never forgive me if this all went tits up. 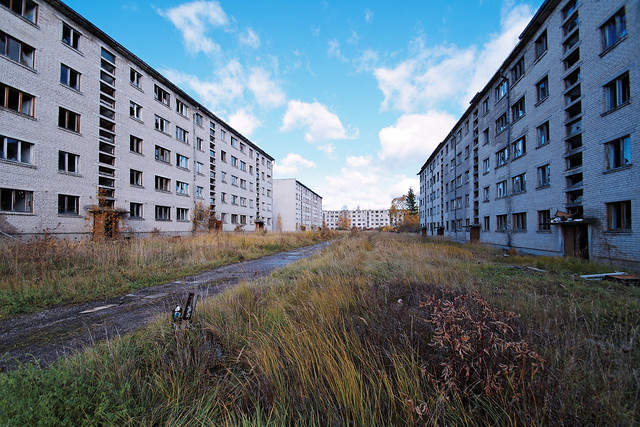 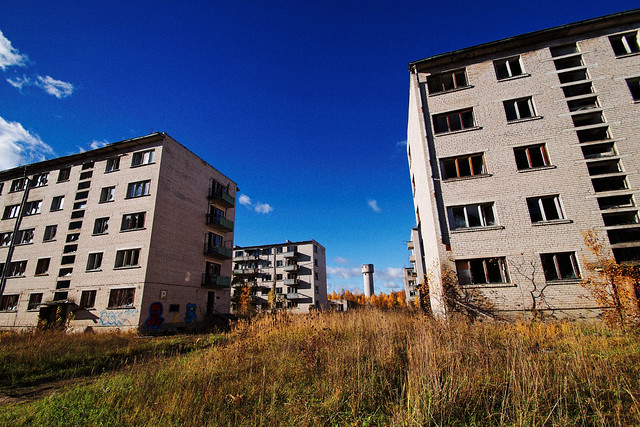 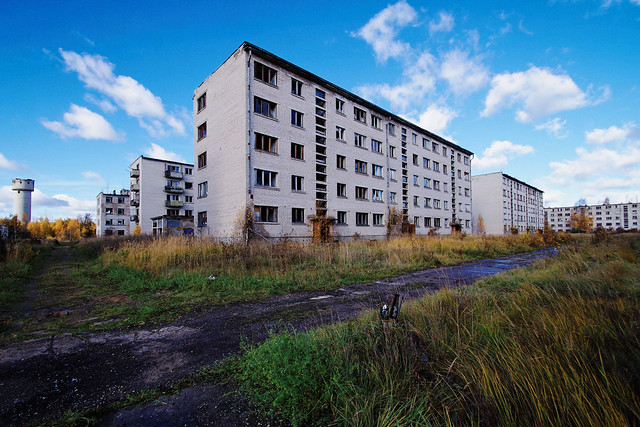 Shelter taken, after what seemed like a long pause in the events of the day, the decision was taken to exit and we fled over the border to Lithuania. 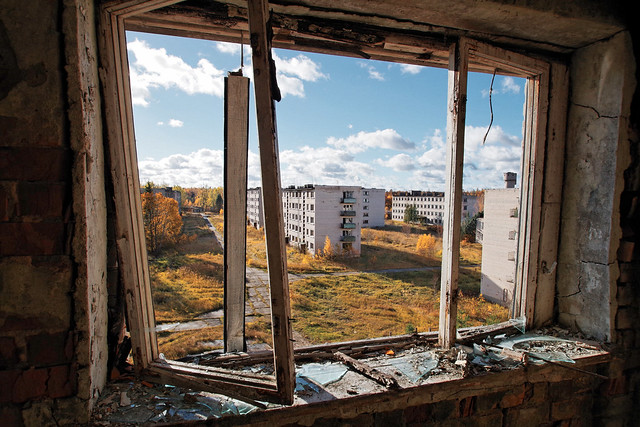 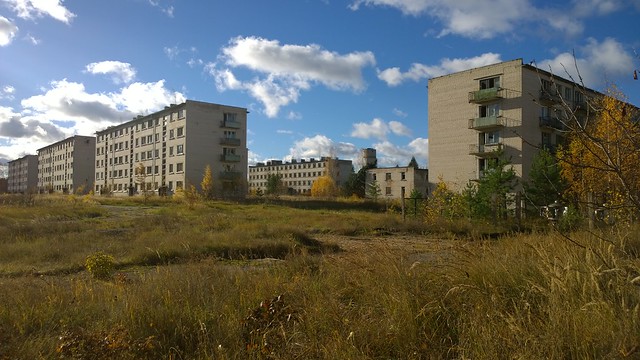 Now that is a cracking report sir.

Tbolt said:
Now that is a cracking report sir.

Fact is generally stranger than fiction in such childish adventures (the use of childish is a phrase often used by the other half in such matters).

thanks for the explore, great pics, love the art work. The picture of the wellington boots manages to be both charmingly naive and sinister.
There is a lengthy Wiki entry about Skrunda, it was strategically important to the SU as its radars covered W Europe and could track possible incoming ICBMs.
Real Cold War stuff