In the classic story of Goldilocks, our protagonist tries three bowls of porridge. One was too cold, one was too hot, but the last one was just right and greedily devoured by the heroine.

There’s an analogy with urban exploration. The sites we visit are in transition so timing (and a small amount of luck) is needed if an infiltration is to be successful. It’s sometimes a very fine line between desertion, dereliction and demolition. Depending on your timing then a site: could still be in use or too difficult to enter ("too hot"); a bulldozed pile of rubble ("too cold"); or a derelict ruin just ripe for exploration (“just right”). The last case is always devoured with gusto.

A recent trip to London to visit three locations resulted in three very different results, a beautiful example of The Goldilocks Triumvitre. The second site we visited was the former railway line from Croxley Green to Watford and it was definitely "just right".

I first saw this urban walk on Sam's Nobodythere website. I’d been on my fair share of ex-railway rambles before, but these were little more than elevated paths on Beeching’s axed railways. The intervening forty years had seen the infrastructure stripped, leaving the odd telegraph pole or concrete marker to signal the line’s previous use.

But this walk was different and I was inspired to do it after seeing Sam’s pictures. This line closed in the 1990s, leaving behind a clutch of small stations and the track-bed. The station liveries, the up-to-date signage and modern lighting created an impression of a post-apocalyptic wasteland rather than the quaint railway footpaths of the Beeching cuts. 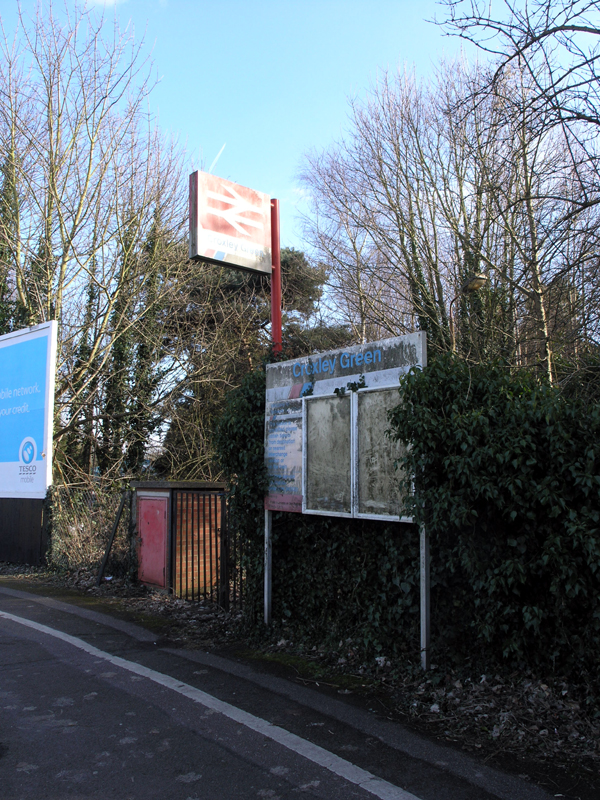 Technically the line was still open and tickets could still be purchased for any of the stations along the abandoned tracks. If you did, then you were picked up by a bus and ferried to Watford Station where you could continue your journey by rail.

This absurd situation was conjured up by British Rail avoiding the special powers required (along with exhaustive expensive red-tape, public consultations and legal matters) required to formally close the stations. It was easier to run down the service, and offer the alternative bus, than actually close the stations for good.

So in 1996, the gates were locked for the last time at the three stations, and British Rail hired a bus. The railway line was then left to be reclaimed by nature. 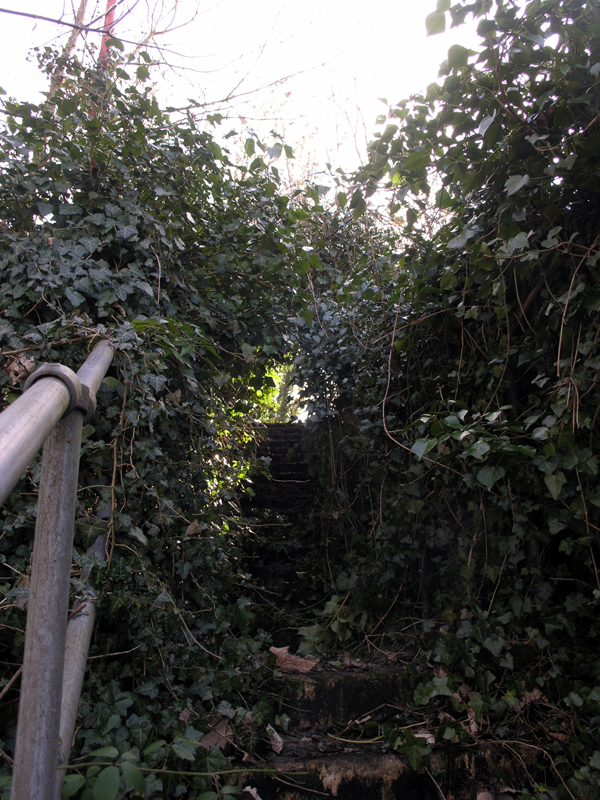 Not much remained of the former Croxley Green railway station. The concrete steps, complete with metal handrail and lighting, suggested that some remnants of the station buildings would remain, but we struggled upwards through the overgrowth to find nothing remaining except the track-bed and the modern station lighting.

It turned out that the station buildings were removed in 1990s, replaced by a makeshift platform comprising wooden boards on steel tubing. This had become ramshackle by 2001 and presumably completely disintegrated by 2005. 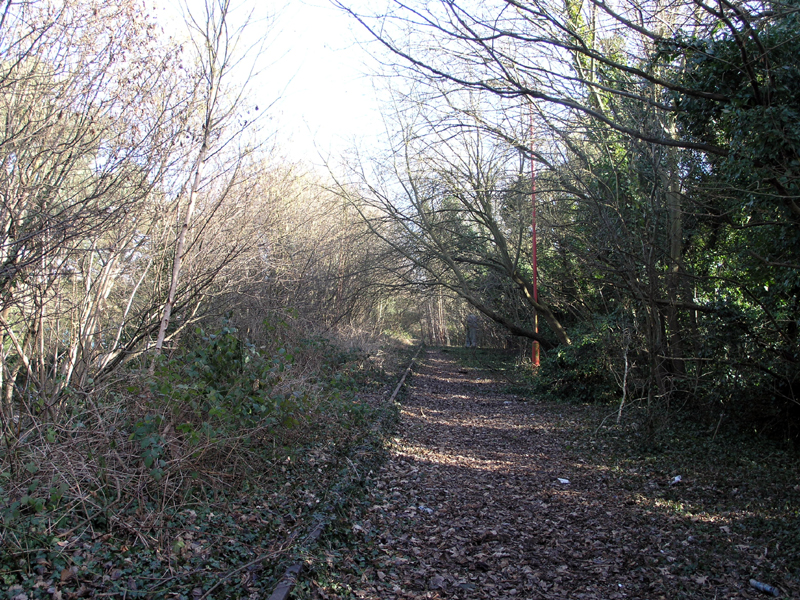 We soon encountered the first landmark. The bridge over the Grand Union Canal offered magnificent views over the canal and of the barges moored along its length.

We picked our way over the bridge and continued following the track along the next overgrown section. 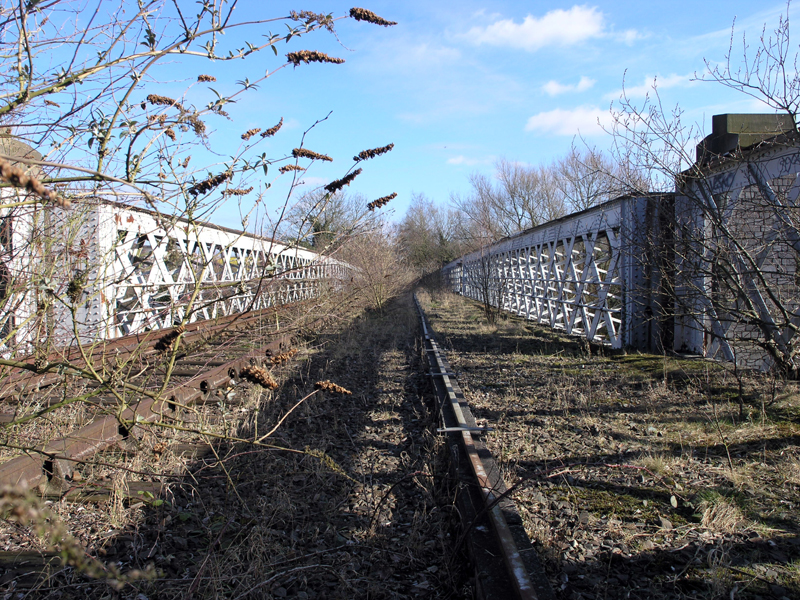 Our slow progress along the abandoned track was rapidly halted. Ascot Road was built in 1996, and swept away the embankment of the railway, isolating Croxley Green station forever. As the facilities and timetable had been run down over the previous few years, a construction of a new railway bridge was deemed far too uneconomical, and so the building of Ascot Road ushered in the permanent bus service.
But, technically, this railway line is still open, and you can still officially purchase tickets.

We picked our way down truncated embankment and promptly got marooned in an anonymous office car park. We ended up walking across trimmed lawns, immaculate car park tarmac, and ignoring the curious faces appearing in office windows before vaulting the fence, scuttling across Ascot Road, and continuing our (now torturous) railway walk. 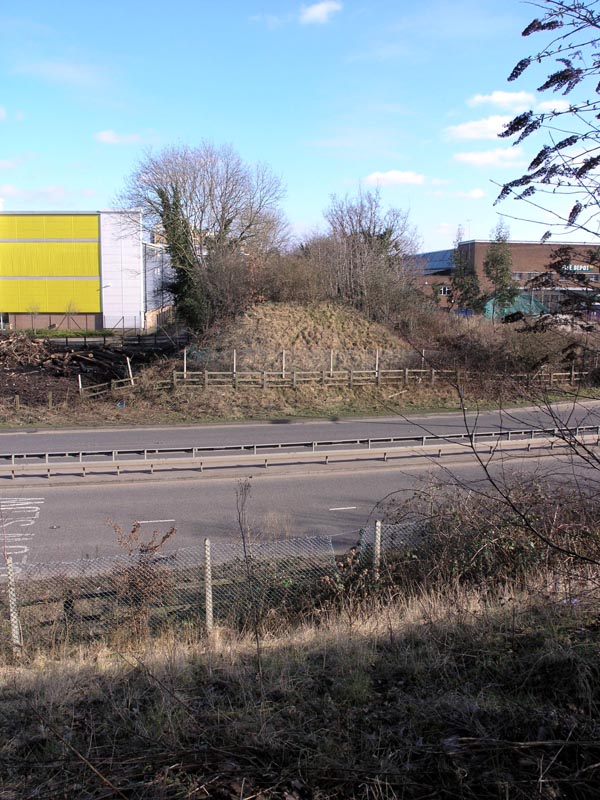 A trail led from the railway line, slopped towards the buildings of a Royal Mail Sorting Office, and disappeared into an open window.

We immediately left the railway line and disappeared into the building. Derelict and smashed, the rooms alternated between switch-gear and storage space. Emerging into a narrow passageway outside, we gingerly entered the larger Sorting Office building and were greeted with absolute silence. All was still, quiet and dank.

We had a brief discussion about exploring this building. But with another site on our itinerary and time pushing on, we decided to continue the railway walk. 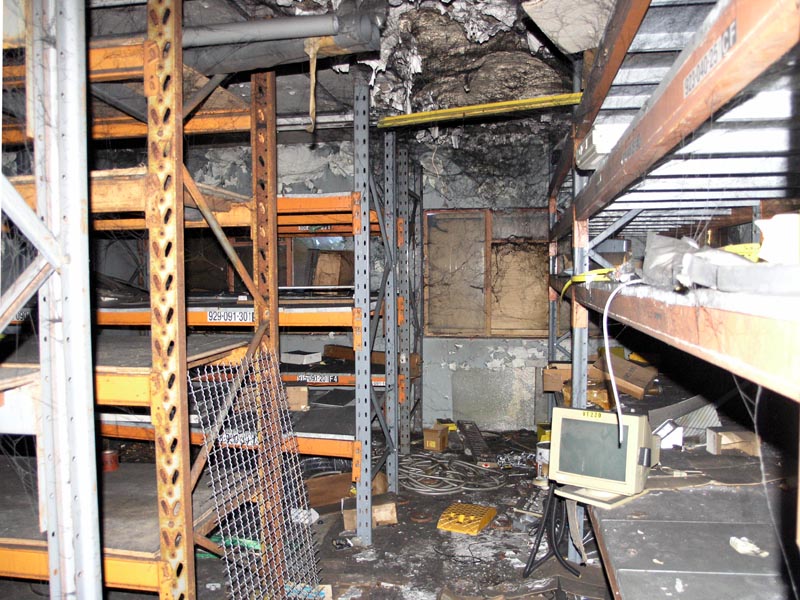 A tiny brick building stood by the side of the track. It was totally encased in ivy and was difficult to recognise as a building at all.

The single room was occupied by two lone chairs and was choked and blocked by trailing ivy. 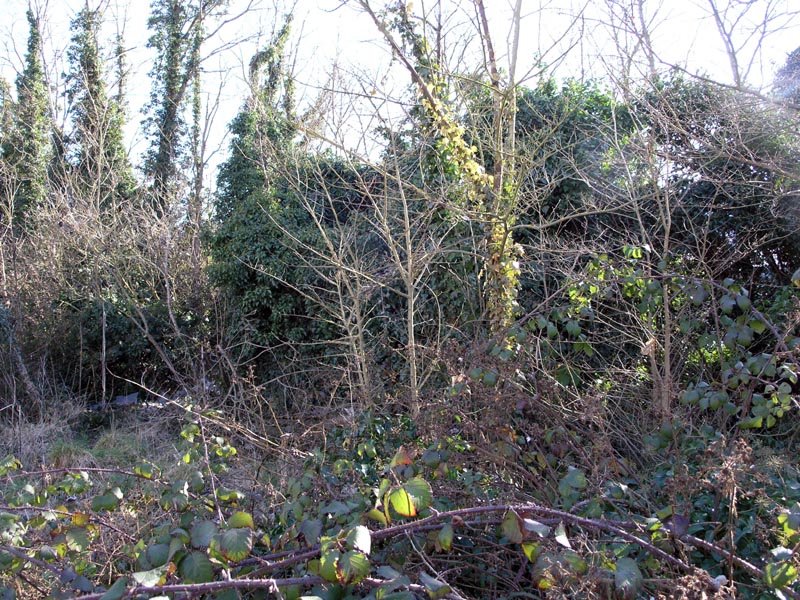 We continued our walk, now making good progress despite the threatening foliage, shrubs and trees which were now growing through the track-bed.

We were also greeted with the bizarre arrangements of general household items that always seemed to find themselves stranded in derelict places. Cuddly furry foxes and old metal kettles were impaled on branches, creating strange and macabre totems along the route. 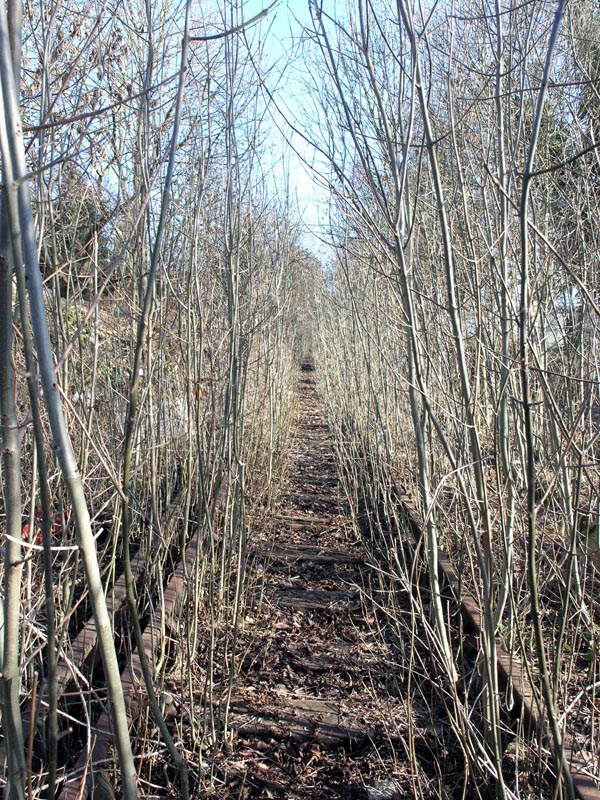 The railway line now travelled under Tolpits Lane as we approached the former Watford West Station.

The security fence across the mouth of the tunnel was smashed open allowing detritus from Watford West station to escape westwards along the short tunnel and track. 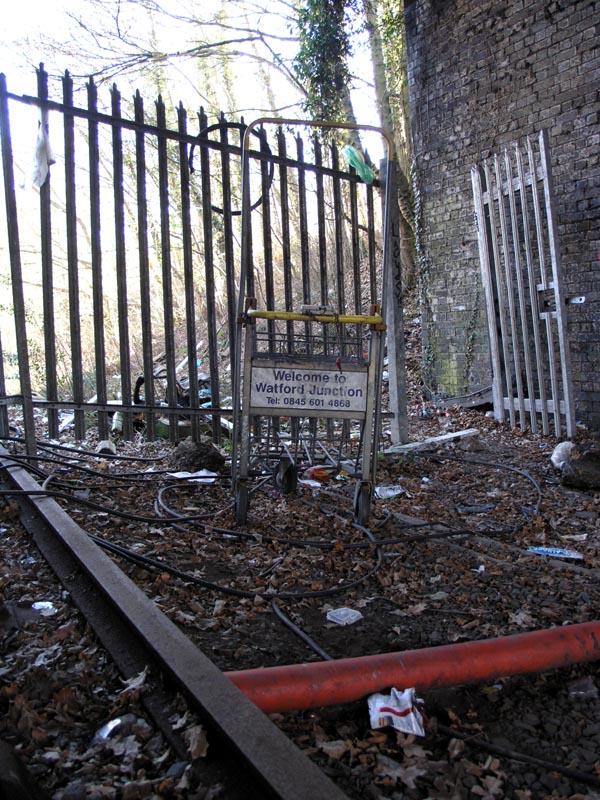 It was difficult to determine where the station actually was. The shrub growth was so bad, that progress was only possible along a narrow path along the former platform.

The station buildings had long gone before the line even closed. This left a minimal station of a set of concrete stairs leading down to the platform from Tolpits Lane, the stone platform, lighting and train drivers’ platform mirrors.

All of this was still in-situ today but was difficult to see through the dense growth. Luckily we’d chosen this February day to make the journey otherwise everything would’ve been hidden behind an impenetrable wall of greenery. 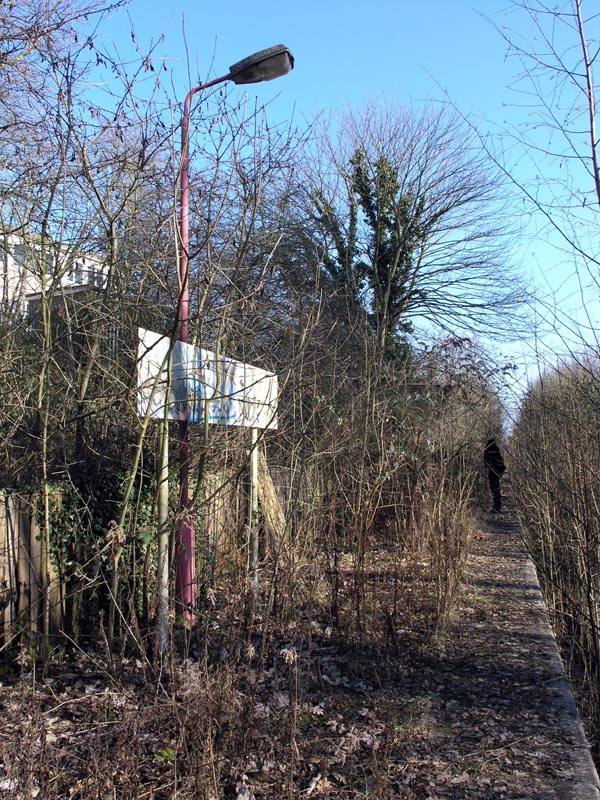 Luckily the jungle receded as we picked our way out of Watford West. We started making good progress as we followed the tracks towards the next road bridge. 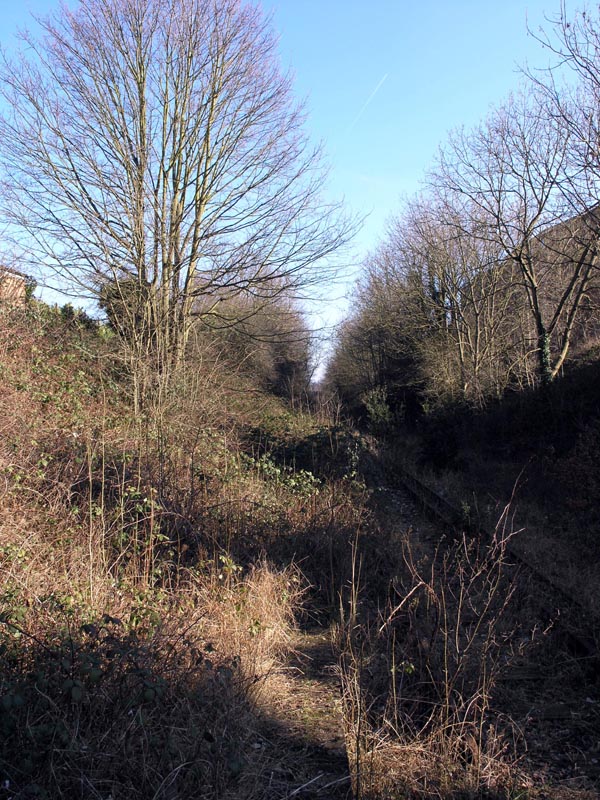 The bridge carrying Vicarage Road was the next landmark along a route which was beginning to feel increasingly rural. The new builds (mostly upmarket apartment blocks) which had sprung up along the line had departed and we found our route increasingly surrounded by woods and green fields. 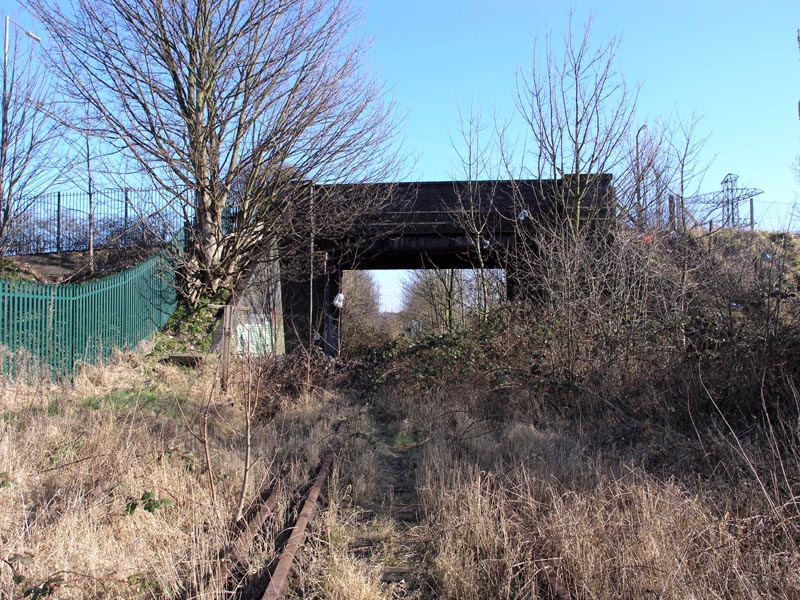 Watford Stadium’s name conjured up impressive images of a large station required to deal with huge numbers of visiting fans on match days. The reality was different as the station was little more than a rural halt with an elevated stone platform and lighting columns.

A small concreted path lead down to the station’s original non-descript entrance of a simple gate in the fence. A small shelter stood nearby, the only shelter offered to the passengers, its plastic windows now yellow with age and covered with graffiti.

The undergrowth was becoming a problem again and we ended up following a narrow track which meandered through the trees. Progress was becoming ever more difficult. 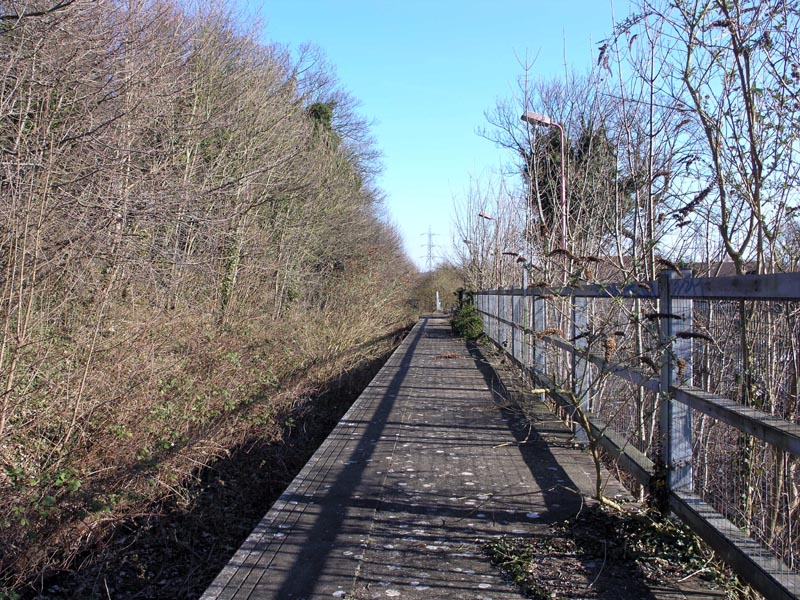 Little remained of the railway except the tracks themselves. Electrical boxes were ripped open and the contents smashed out, whilst the track signalling equipment was ripped from its mountings and left strewn in the ever-expanding undergrowth. 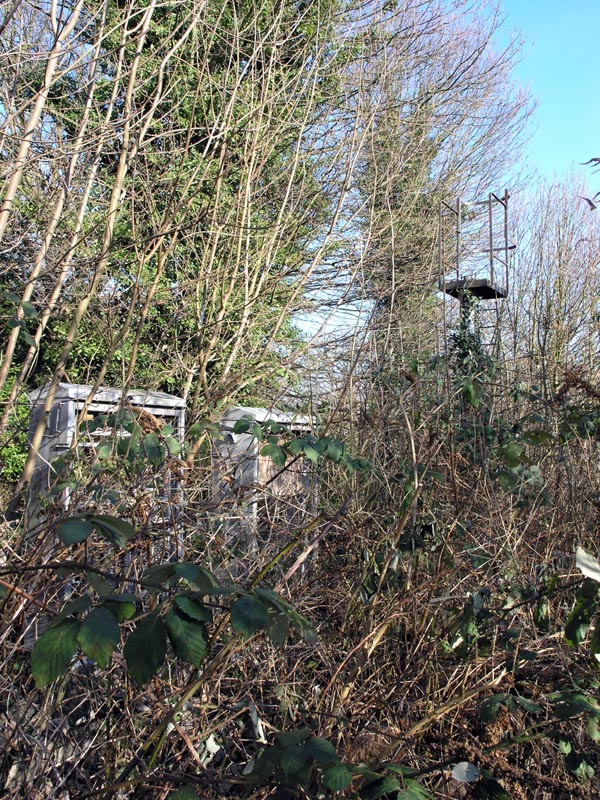 The area near the River Colne was marked by several small bridges and a huge wall of trees, shrubs and bushes. The well trodden paths we’d been following started to meander even more wildly, gradually dying out or stopping abruptly at walls of thicket.

The Croxley Green Depot used to stand in this area, a huge shed capable of housing eight locomotives. The depot was derelict in 1985 after British Rail switched to using 313 EMUs and was eventually demolished. Any remains were hidden by the new tree growth.

Progress was now extremely slow and we were becoming stung and scratched by nettles and thorns. There was talk of turning back. 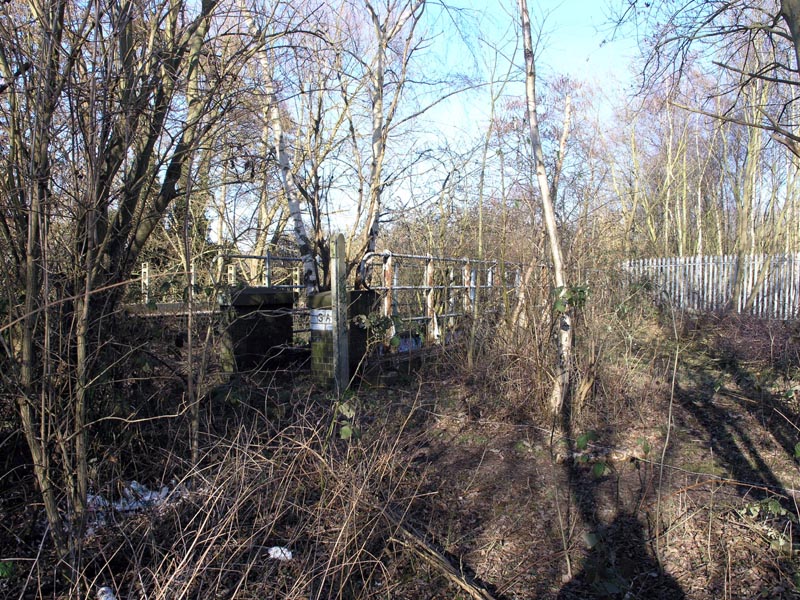 The undergrowth became worse and worse and we were being torn to shreds. A bridge appeared in the distance we decided to push on, reach the bridge, and bail out there if it was still hard going.
As it turned out, we’d reached the end of our torturous journey anyway. The tangled thicket gave way to grass and stone and we quickly made our way under the bridge to the next section of track.

We stopped as we both heard a low rumble approaching. “That sounds like a train”. The rumble got louder and louder until a train emerged from around the bend and sped past. We watched from the safety of the tunnel entrance, standing on the derelict spur, aware that our journey was over as we’d reached the live network.

There was no suggestion of walking back along the track to our car. We decided to brave the streets of Watford instead and climbed the bank next to the Wiggenhall Bridge. The final indignity was getting tangled up in the barbed wire next to street, much to the amusement of the passing motorists.

We’d done it, but I was pleased we hadn’t attempted the route in the spring or summer. That would’ve been too much of a challenge. 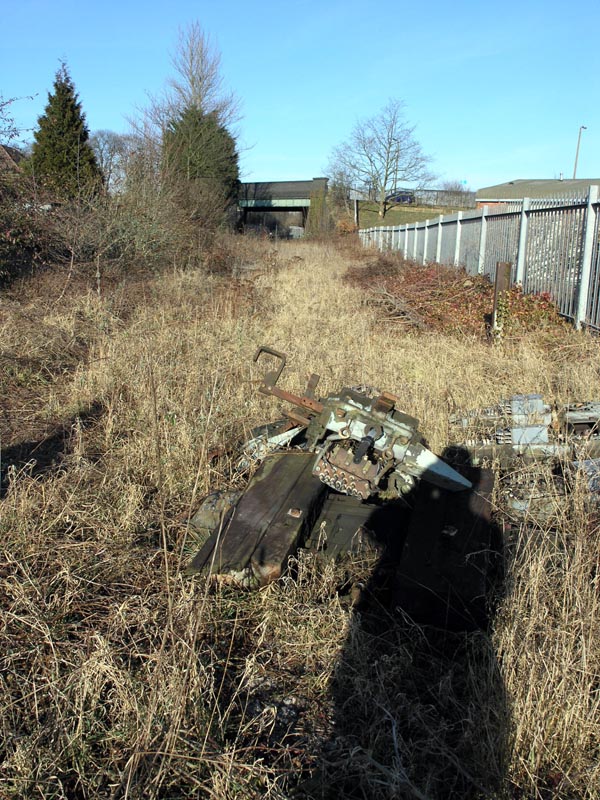 Further pictures of our journey are published on my website.

I love how nature is slowly reclaiming the space along the track, especially the station.
L

Adandoned stations and overgrown tracks is some of the things I like most. Thank you for exploring and posting the pictures on DP

I have walked this line may times. In May 2006 the signals were still in place but a month later one set had gone. There were also a lot of signs still in place which I can't see in your photos. Shame. Back then there were also plans to extend the Metropolitan Line along this route but it seem it came to nothing.

Edit: Seems the Metropolitan Line plan is still being looked at:
http://www.tfl.gov.uk/corporate/projectsandschemes/2053.aspx
Last edited: May 18, 2010

thanks for posting these. Used to spend a lot of time in that area. mrs btbm's father worked in the Dickinson's paper mill in Croxley Green. Now housing and light industry i imagine.

There's another line running S of this one (locally known as the watercress line) that used to terminate at Batchworth station. Now a DIY store i think.

borntobemild said:
There's another line running S of this one (locally known as the watercress line) that used to terminate at Batchworth station. Now a DIY store i think.
Click to expand...

If it's the line I'm thinking of it's now a cycle route/footpath called the Ebury Way. There's a few signs of the old railway left, notably the bridges.

There is someting very poignant and fascinating about abandoned railways - thanks for posting up.