The torch and lighting thread.

I'll admit it, I have a torch problem. As in I can't stop buying more of them.
Most people stop at a Led Lenser P7.2 and call it a day.

I decided we need a thread to discuss torches and lighting tools.

Currently my weapons of choices are a Thorfire C8s (super long throw torch that's great for long tunnels) and a CN-160 LED array for flood lighting a wide area. Been super effective for nice even light painting so far.

What kinda lighting does everyone else here use?

Another thread to discuss torches you mean? There have been many over the years.

I use a tiny red single LED keyfob torch, and a very old but still working fine cree led mini-maglite conversion. That's it.

I have a stash of torches that the fella buys me, he also has a torch problem

Led lenser P7.2 is my current fav....although jsp has one I'm liking the look of!

I put off buying a P7.2 for ages, but then last year my previous torch decided it worked better in small pieces and just at that moment one of the Amazon daily deals came up with a 50% reduction on a P7.2, well you'd have to be an idiot to pass that up.

I also use a CV Life cree torch which is very very good as well, at this point in time I'm not sure which of my torches is the 'backup'!

krela said:
Another thread to discuss torches you mean? There have been many over the years.

I use a tiny red single LED keyfob torch, and a very old but still working fine cree led mini-maglite conversion. That's it.
Click to expand...

But you're part bat Krela, I don't have a torch problem, fetish, maybe, got a load of em, I like the X21, no good for pics though, the P7 is a good all round torch

Led lenser P7.2 takes some beating
my back up a Fennix
and this is my Tunnel/mine torch
LED Lenser X21R.2 Rechargeable LED Torch
A

I use converted led floodlight chips powered by massive lithium polymer batteries and heatsinks+fans to keep it cool, makes for amazingly lit photography and lasts for ages

Andrew32 said:
I use converted led floodlight chips powered by massive lithium polymer batteries and heatsinks+fans to keep it cool, makes for amazingly lit photography and lasts for ages
Click to expand...

Nice! Nothing like some DIY lighting.
I've got a Thorfire S70s on order at the moment. Something like 4000 lumens and 700m of throw. That's gonna be my big underground light.
F

Good thread Gromr,
I have used many, many various torches over the years from many manufacturers. My fav's were non led ordinary filament bulb types which gave a lovely yellowish glow. unfortunately these were very large and only lasted minutes on full power. Next came the led types which fitted the bill exactly but unfortunately gave a very blue light. Now we have moved on a bit and with the advent of Cree leds the lighting seems much whiter !! Currently i have from Lenser a P7.2 a P14 and a P17.2 and also a M7RX (which is by far the best all round torch i own, although rediculously expensive !!) and a couple of mid range Fenix although im not overly impressed with these. Amazingly some of the best torches i have found for light painting are the really cheep head torches available post free from China on Ebay. For close to mid distance work these give a really good flood area requiring less frantic wrist action !!! Unfortunately they are a bit hit and miss especially regarding white balance and out of the six i own only two are used to light paint.
I have got to say that your visit to Ouvrage Latiremont was lit to perfection and really impressive - so much so that i've ordered a Thorfire C8s. I think that the moral of the story is that you dont have to spend a fortune on a named brand to get what youre looking for but buying cheap is a bit of a step in the dark !!

Tool grade torches from old skool manufacturers for primaries all the way. Sod the lumens.

SlimJim said:
Tool grade torches from old skool manufacturers for primaries all the way. Sod the lumens.
Click to expand...

Those £10 torches from lidl may have the same LED in them as the quality high cost ones, but they do not have the same build quality, waterproofing or testing behind them, and you don't want to be trying to find your way out of an underground quarry in the pitch black.

There is, and should be, a fundamental difference in thought between torches you're betting your life on, and things you're using to light photos. They're two entirely different things.

This is very true. There is a reason why people spend £80+ on high quality torches, in some cases your life depends on it. Always good to have several backups too, even if it's just a couple Amazon Cree jobbys.

Currently eyeing up a Armytek Wizard Pro V3 but can't quite justify the £75 price tag...

Gromr123 said:
This is very true. There is a reason why people spend £80+ on high quality torches, in some cases your life depends on it. Always good to have several backups too, even if it's just a couple Amazon Cree jobbys.

Currently eyeing up a Armytek Wizard Pro V3 but can't quite justify the £75 price tag...
Click to expand...

That looks interesting Grom, Thanks

krela said:
Another thread to discuss torches you mean? There have been many over the years.

I use a tiny red single LED keyfob torch, and a very old but still working fine cree led mini-maglite conversion. That's it.
Click to expand...

I'm feeling out of my depth

I've been meaning to update my box of matches for years...I'm gona have to read these comments a few times to digest them, I'm scared already its become very technical.

I started out exploring audits with one candle power but even at such a young age I had the sense to carry a slpare,
Being Serious for once although it goes against the grain,
A good torch is a must and as someone has said can be a lifesaver, a decent back up is also a good idea. Get the best you can afford and carry spare batteries, being underground without light is frightening even when you know the way out, I wouldn't want to experience it again, Stay Safe

I try to avoid light painting from the front if at all possible, unless I'm trying to replicate window light. The reason being that it can create quite a "flat" lighting that lacks contrast or depth between elements in the scene. When I do though, I do like the Lenser torches as they create quite an even light with no hotspots. Examples: 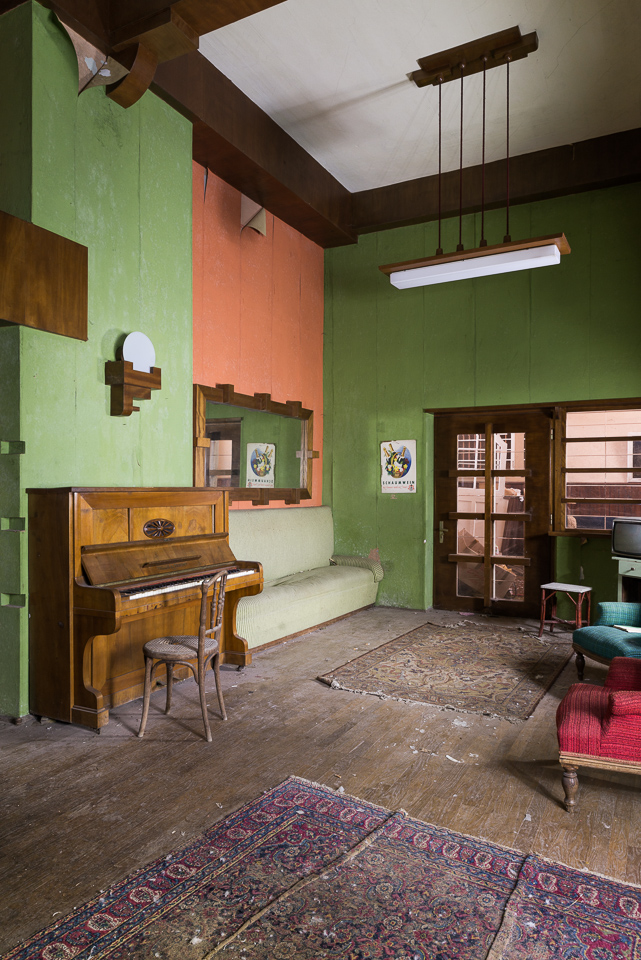 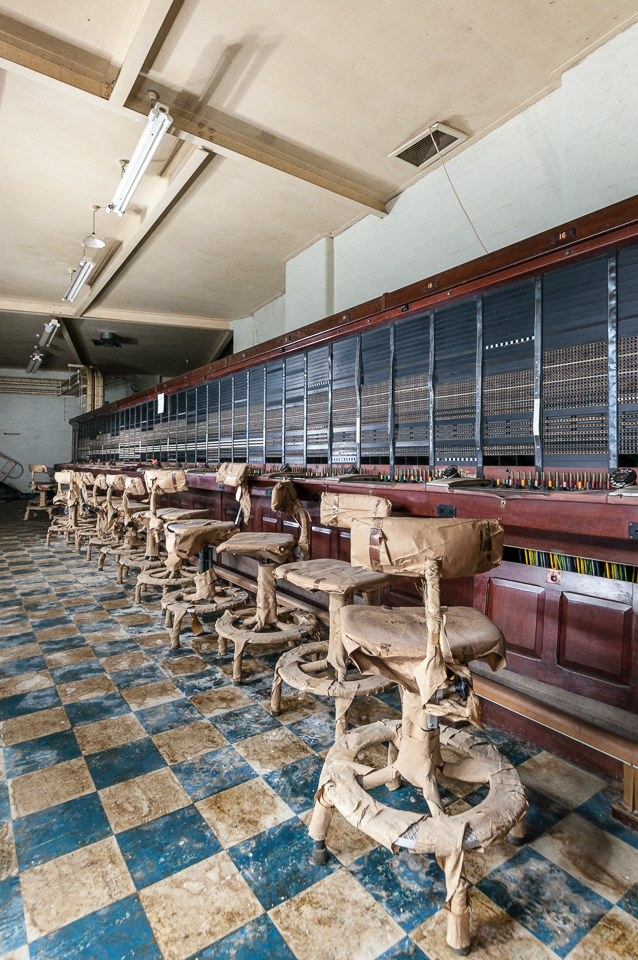 The main drawbacks of these torches being how weak they are, requiring either long exposure times (several minutes for the Maglite) or requiring a larger aperture (shallower depth of field) than I'd like to allow more light in. For larger scenes they're pretty much useless, unless you're happy doing exceptionally long exposures which inevitably lead to hot pixels from sensor overheating.

That's where the Chinese CREE torches come in. 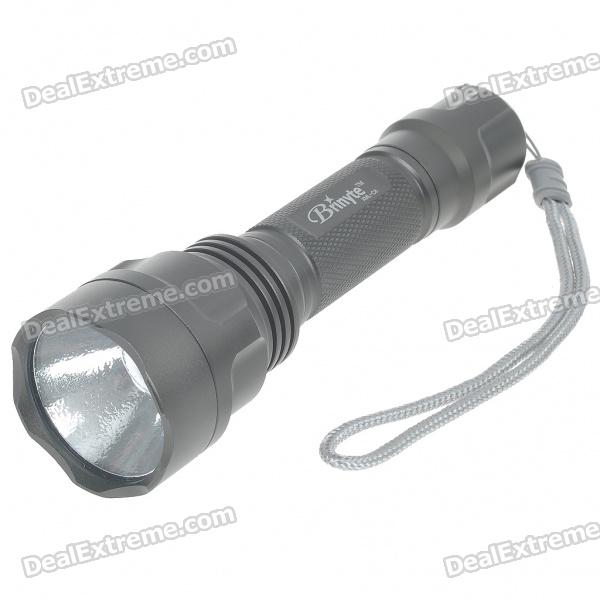 I've got a couple of these single chip torches that are lightweight and powerful, they might not have the out and out quality of manufacture of the Lensers and Maglites, but they're still machined chunks of tough aluminium alloy with easily replaceable double seals for wet environments. They kick out much more light, they allow shorter exposures or a larger depth of field. They do however have hotspots on the beam pattern, making them unsuitable for trying to replicate an even natural light, but perfect for texture-enhancing backlighting. Examples: 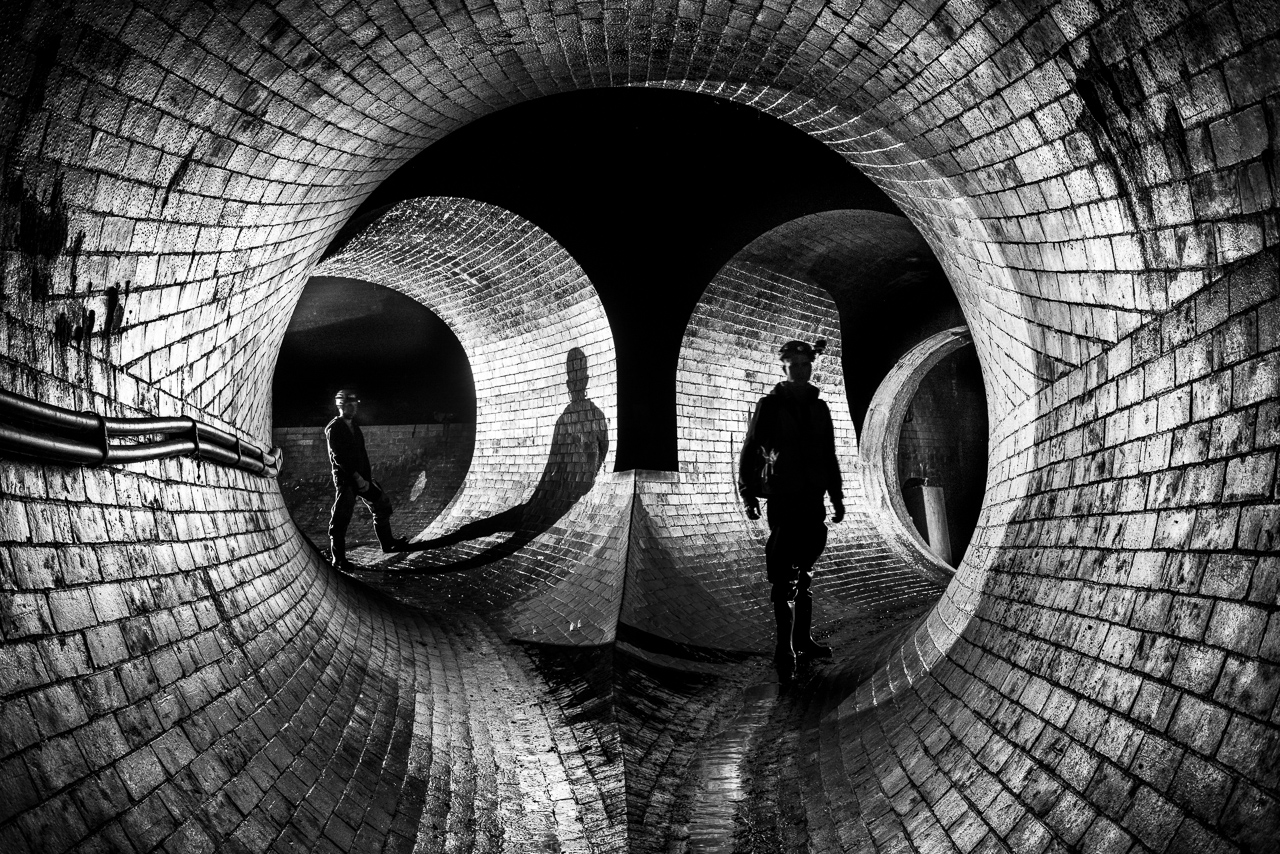 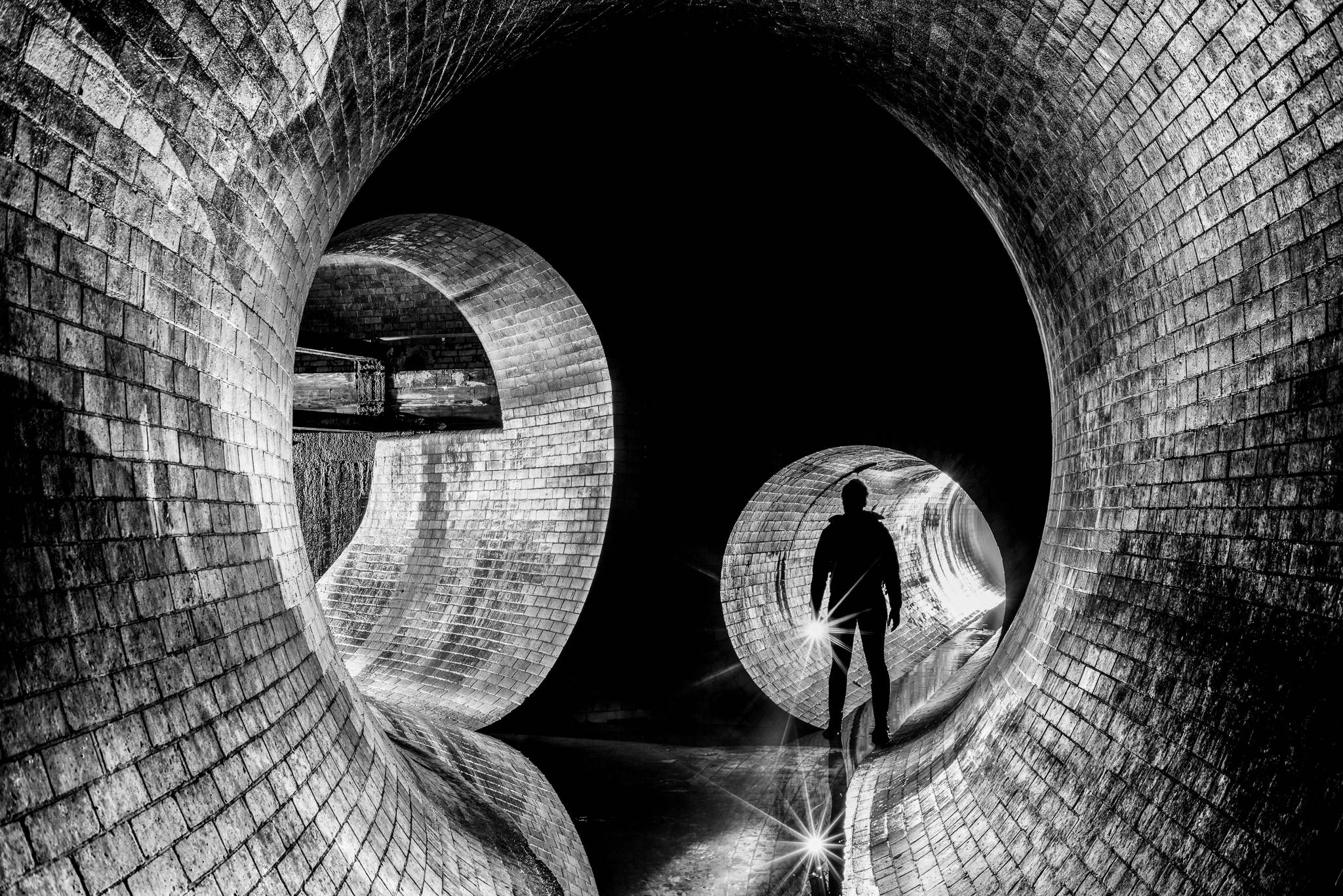 As you can see, nice large depth of field within a standard 30 second exposure time. Although it does mean that for shots with people they still need to stay pretty still and you inevitably lose some sharpness on them due to tiny movements.

And so enter... The 10-chip Chinese CREE behemoth. 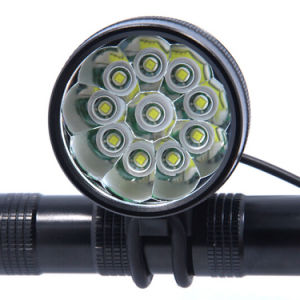 You can take what they say about Lumen output with a hefty pinch of salt, but they do kick out a lot of light. Comparing one side by side with the headlights of a Toyota Yaris there was really not much in it, one single handheld torch as bright as car headlights. Oof.

This is where exposure times really start to fall, or you can use it to illuminate huge spaces very easily. For example, this tunnel shot had an exposure time of just a quarter of a second allowing me to retain the definition of the smoke where other torches would have required a 20-30 second exposure perhaps: 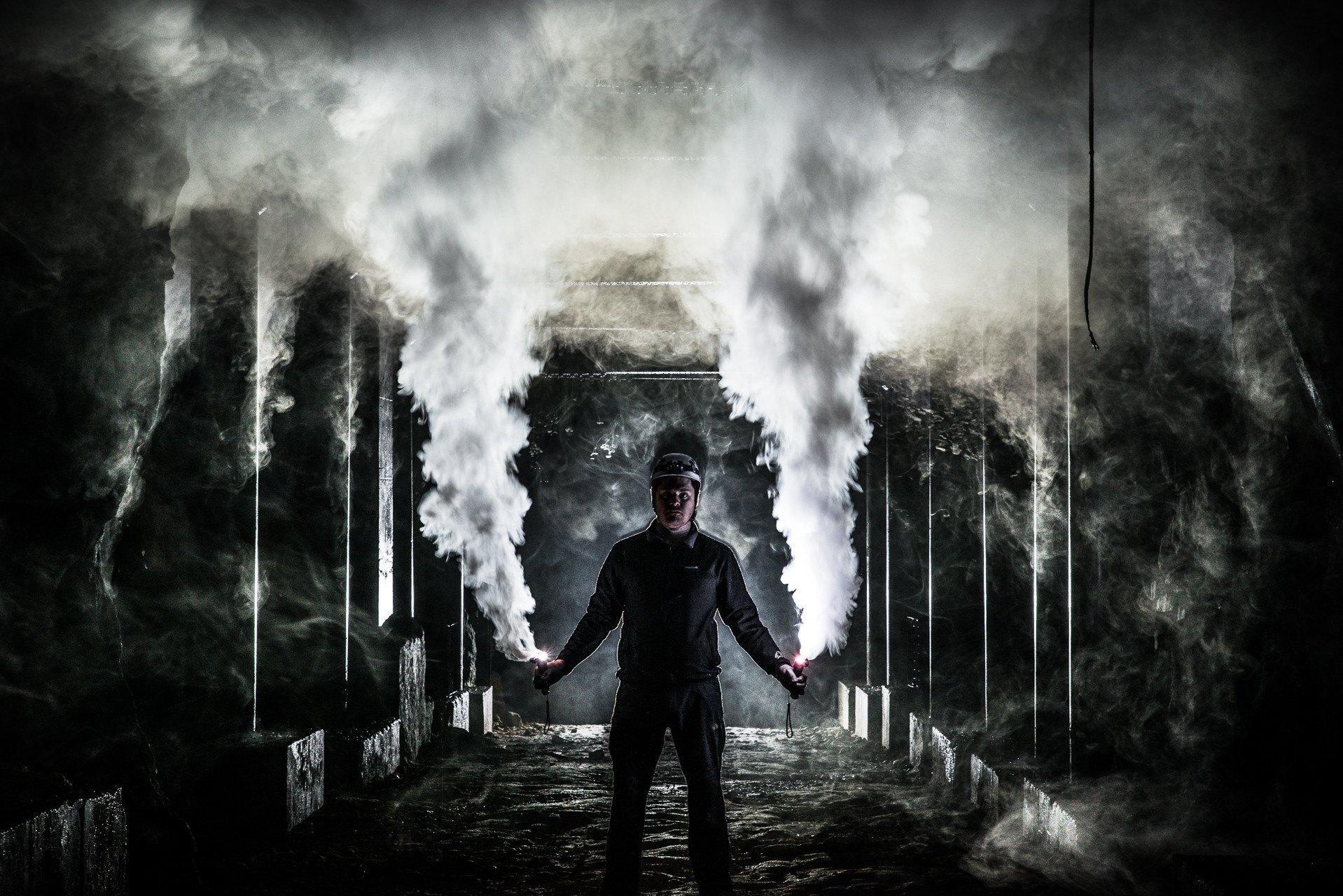 And for lighting large spaces easily, such as the entrance to the infamous Cathedral chamber in Box: 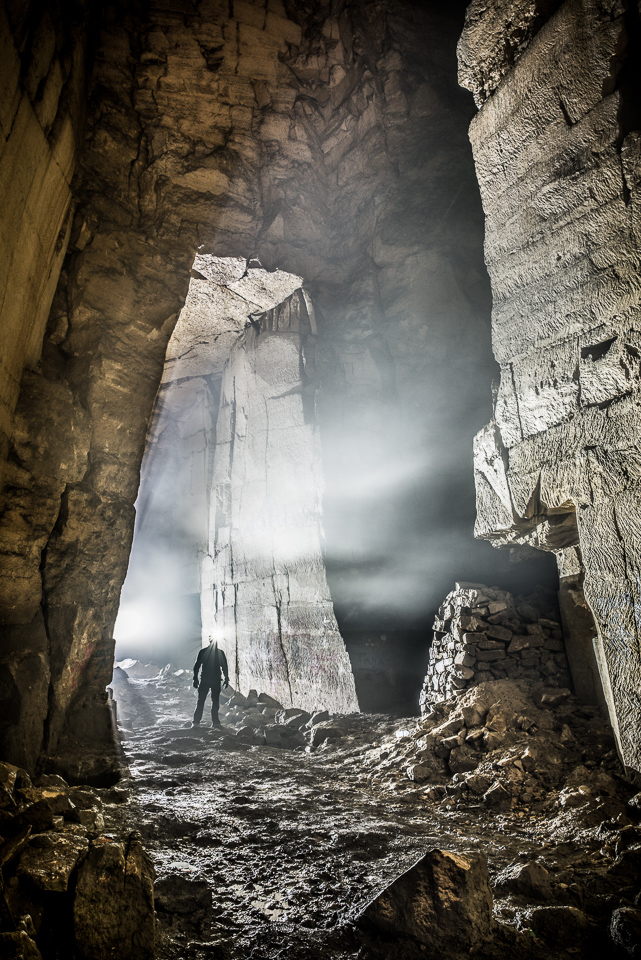 There is another side effect to having such a powerful torch too, which brings me right back to the start of this post and that is recreating a softer more natural light. They're powerful enough to bounce off raw concrete quite well without too much loss of light and still maintaining a small aperture / large depth of field. Example of bouncing the light overhead to illuminate a very dark area: 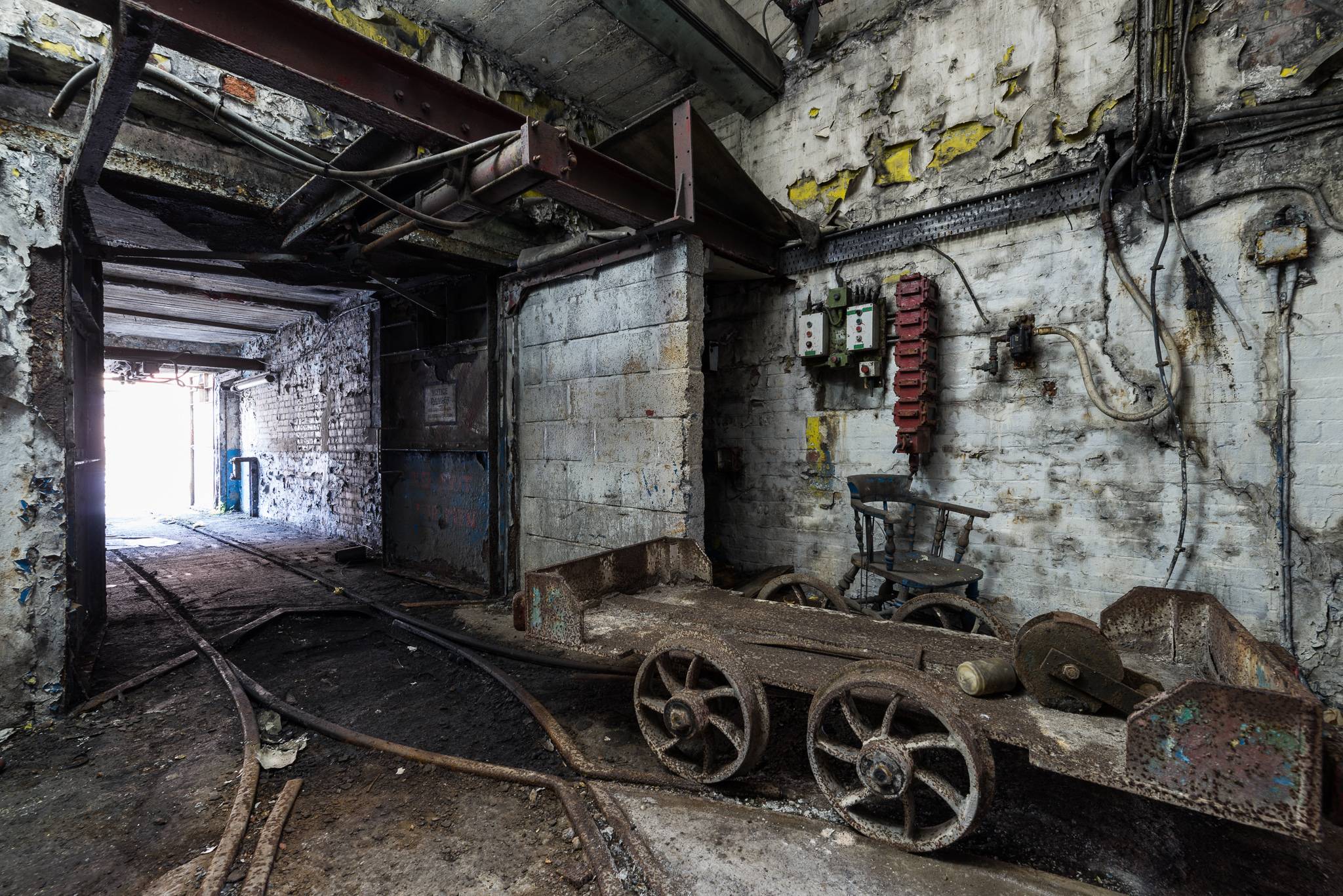 So that's the main options and techniques that I use regularly. There's no real hard and fast answer to all light painting solutions in all scenarios, its more a case of being aware of what you'll be photographing and how best to light it. None of which have to cost the earth or weigh a lot. 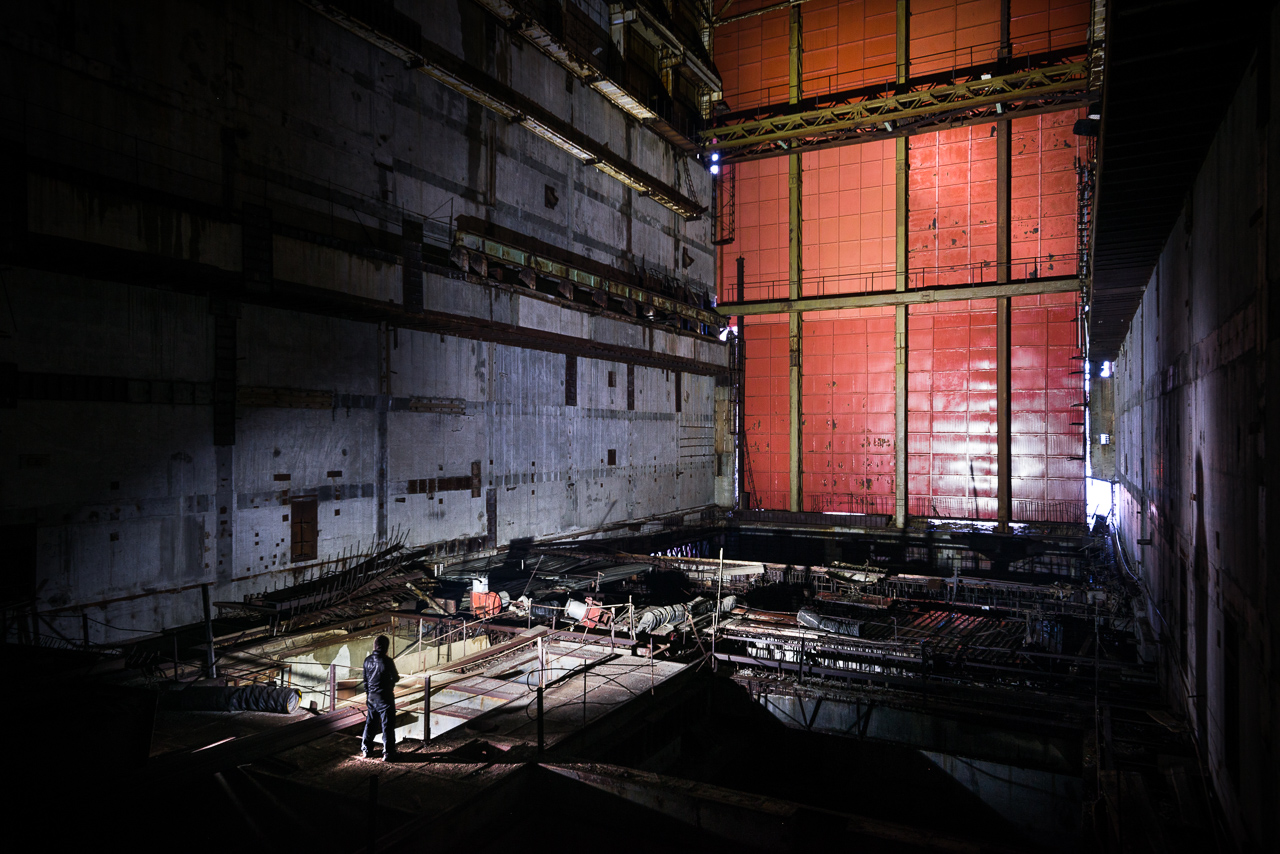 (Sorry for the mixed size images, was just fishing through exported images for examples.)

I started with a British Rail 'Bardic' handlamp, it did its job.
Later on, a lenser P5. It was great and lasted years. It rolled off the end of the bed, landed on some soft shag pile carpet in a hotel and broke. I have never understood why and couldn't fix it.

Since then, I have used those horrid cheap little Chinese CREE ones, as after all, no crying when they get broken.
The Bardic or a big Maglite occasionally get an outing, but they are dim and useless by comparison.

P7.2 and a cheap head torch with red light.

Can't fault the lenser use it all the time for work and it's been bumped about while exploring and is still going strong. It does burn through batteries fast. The P7.2 is sometimes on offer from amazon at a good discount as well.

Sadly I don't have a torch fetish.i have a cheap one of Amazon.and I keep two led tube lights in my bag.but don't really get to go underground much.i should invest in a better torch.i always bump up the iso a bit and luckily my lenses are very fast.great pics cogito.love the box mine one.
You must log in or register to reply here.