The following is a report I did for a railway society of which I am a member.

I am sure it will be of interest as it includes one of the longest publicly accessible railway tunnels in the UK. There was also quite a lot of abandoned railway infrastructure particularly on the lower section of the route. I have included a few photos here but this link will take you to a comprehensive gallery of captioned images: Tintern to Tidenham Tunnel - Wye Valley Greenway - JHLPHOTOGRAPHY (jhluxton.com)

On Monday July 12, 2021, I walked most of the Wye Valley Greenway which opened on April 1st. The greenway provides a foot and cycle path linking Tintern with Chepstow following the southern section of the Wye Valley Railway. Time constraints meant I was unable to complete the final mile from near the site of Netherhope Halt, just beyond the south portal of Tidenham Tunnel to Sedbury, near Chepstow but I will return to walk this section in the future.

The Wye Valley Greenway commences in Tintern Village on the former Wireworks Branch. The Wireworks Branch was constructed off the main Wye Valley Railway to provide a link to the Lower Ironworks in the Angiddy Valley. However, by the time the branch was completed in August 1875 the wireworks were closed and lay dormant until 1880 when reopened under new proprietors.

The main feature of the Wireworks branch is the three span Wireworks Bridge over the River Wye which was constructed by Isca Foundry Railway Plant Engineers of Newport. By 1901 the Abbey Wire and Tinplate Company had ceased trading and the locomotive which operated the branch sold in 1902. The branch remained open for limited freight traffic serving a tannery and sawmill with horse traction.

A heatwave in the summer of 1935 buckled the deteriorating trackwork and the decision was taken to close the Wireworks Branch with the track being removed in early 1941.

The Wireworks Bridge was retained to provide road access Ferry Farm and as a footbridge by walkers accessing various footpaths on the Gloucestershire side of the River Wye – the bridge is now an integral part of the Greenway. The Grade II listed bridge is due to be refurbished by Gloucestershire and Monmouthshire County Councils in a joint project due to commence in 2022.

Once one crosses the Wireworks Bridge the very occasional remains of a sleeper can be seen poking through the surface of the track bed. Close to Ferry Farm the stone paved “Monks Path” joins the from the left. Monks travelling to or from Tintern Abbey would have used this to access the ferry which crossed the river from Ferry Farm to Tintern Abbey, close to where the Anchor Inn is located. Intermittent views of the ruins of Tintern Abbey can be seen from the track bed.

At Wireworks Junction the Wireworks Branch joins the Wye Valley Railway close to Tintern Tunnel. Tintern Tunnel is gated and is not part of the Greenway due to bridge over the River Wye near the northern portal being dismantled. The Wye Valley Railway itself officially opened on November 1st, 1876, Closing to passengers on January 5th, 1959, and to freight northwards from Tintern Quarry to Monmouth on January 6th, 1964.

Heading south the next feature of note is Black Morgan Viaduct almost hidden in the undergrowth between Tintern Tunnel and Tintern Quarry. It is a three arched structure, but I was only able to see one arch. It takes its name from Black Morgan Wood which itself is believed to have been named after Admiral Sir Henry Morgan a local landowner and privateer whose name lives on in a brand of rum.

A short distance beyond Black Morgan Viaduct one reaches the point where one must divert from the former track bed during the periods that Tidenham Tunnel is closed. A sign is provided advising of tunnel opening times and the route to be followed during closure periods. The tunnel is located 1380 metres beyond this diversionary point. This section can be walked or cycled when the tunnel is closed but obviously one would have to return to this point as there are no other access or exit points.

Approaching Tintern Quarry one starts to encounter track components. It should be remembered that the permanent way remained in place on this stretch of line until it was converted to a Greenway over the winter of 2020/21. There is one particularly large dump of track and point work just north of Tintern Quarry. According to the Wye Valley Greenway web site some of the track has been recovered for reuse by the nearby Dean Forest Railway.

From the track dump heading south the formation is wide enough to support double track – Tintern Quarry being served by a loop equipped with loading hopper off the running line. The last train to Tintern Quarry operated in December 1981.

At the end of what was the quarry loop is a complete buffer stop. One wonders if this is to be retained as a feature or taken away for scrap?

Beyond the quarry some of the recovered sleepers have been used to stabilise the steep bank on above the track bed. Also of note is that the river side running rail has been left in place for several lengths. It looks as though the sleepers have been cut through and most of the sleepers and other running rail removed. This may have been done deliberately to act as warning of a rather steep drop off the track bed at this location. One also encounters the remains of a permanent way hut and its nearby coal bunker.

At the north portal of Tidenham Tunnel there was more evidence of recovered sleepers and rail chairs.

The tunnel is gated, notices advise that one should only use the lighting provided to protect the bats, that it will be checked before it is locked. Emergency releases are also provided near the portals for use by anyone who becomes locked in!

The track bed in the tunnel is fully surfaced with illumination by low level lights. Markers are provided to indicate distance to the portals. A corrugated iron canopy has been provided to prevent significant drips where the ventilation shaft is located, but that prevents one looking up the shaft I managed to miss that feature heading south and only noticed it again on the return. Some of the tunnel refuges have been infilled, others remain open.

As Tidenham Tunnel is curved there is no light penetration once one is around 100 metres from each portal and one is solely reliant on the low-level lighting. I was the only pedestrian walking the tunnel though a couple of cyclists passed me as a I headed south, though on my return I encountered no body! Signs indicate that 20 minutes should be allocated to walk the tunnel but in reality, walking time is closer to 15 minutes. 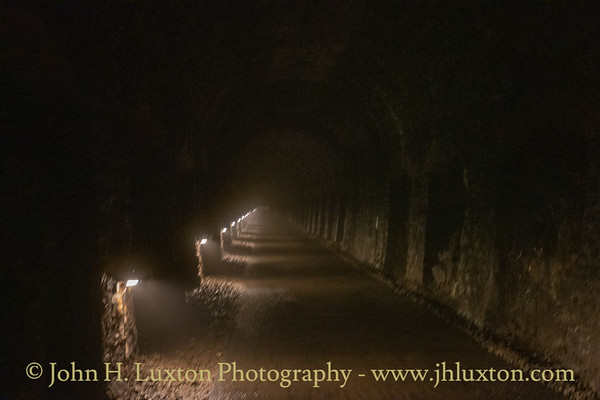 One exits the tunnel a few yards from an overbridge near the site of Netherhope Halt of which no trace remains. It was at this point I realised I had better turn around to return to my hotel in time for dinner.

About halfway back to Tintern I encountered a couple with a dog looking a bit lost. “Is this Offa’s Dyke?” they asked. Unfortunately, I had to disappoint but pointed out that they had walked some of the new Wye Valley Greenway instead! They should have taken the Monk’s Path which leads up the valley side near Tintern to reach that some more signage is needed

The area around Tintern is fascinating nearby there are further railway walks in the Forest of Dean, the Dean Forest Railway and of course plenty of industrial archaeology to explore as well as the ruins of the Cistercian Abbey which made Tintern a pioneer location in UK tourism in the late 18th Century.

Before or after walking the Greenway there a couple of good hostelries of note worth visiting.

Offering food and drink including a range of real ales near Tintern Abbey is the historic Anchor Inn. Within yards of start of the Greenway is the recently refurbished Wild Hare Hotel (Formerly the Royal George) offering a range of local real ales, imaginative food, and comfortable accommodation.

Further information on the Wye Valley Greenway and its history can be found at: www.wyevalleygreenway.org
V

thanks, it's a part of the country I know little about, sadly.
I wouldn't like to get locked in with a load of bats !

verdigris said:
thanks, it's a part of the country I know little about, sadly.
I wouldn't like to get locked in with a load of bats !
Click to expand...

If the gates are closed whilst you are inside there is an emergency release button, however, the signs indicate that the tunnel will be checked before it is locked. I didn't see any bats walking both ways! Brilliant experience though.

The Wye Valley is a brilliant place to explore. Not only is there the well known Tintern Abbey - but on the hillside above a ruined church abandoned in the 1970s. Also many old industrial remains too and Piercefield House an abandoned mansion. I have not had chance to look at that one yet.